Luca Shaw is in Peille & We Think He's Signing for Canyon 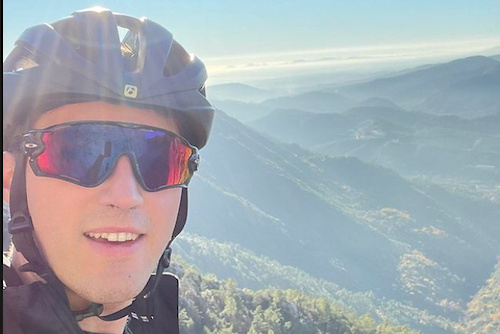 Peille may only have a population of around 2,000 people but as far as producing World-class mountain bikers goes, it punches way above its weight. The small village perched on a rock between Monaco and Menton is the birthplace of Nico Vouilloz, Yoann Barelli, Nicolas Fillipi, and, most importantly for this article, Canyon Collective team director Fabien Barel.

The area is also a popular testing area for downhill teams and in fact Jamie Edmondson and Vali Holl of the RockShox Trek team were there last week testing on the Blausasc track. The latest rider we've seen set up camp there is Luca Shaw. Shaw posted a video earlier in the week of himself riding into the village along the D53 cliff road along with the caption, "Anyone know this village?". According to PB's Matt Wragg, who lives in the area, Shaw has been there since at least last Monday.

We already speculated this off-season that Luca Shaw may be leaving the Syndicate for a new team, a move that was confirmed yesterday. While we initially suspected he would ride for Specialized, our sources have been connecting Luca and Canyon for a few weeks and we think this European vacation could be further proof of his next team. Not only was Fabien Barel born in Peille, he now lives in neighbouring Blausasc where the Canyon Collective race team is run from. The theory is strengthened by a Troy Brosnan comment on Shaw's post that describes Peille as Shaw's "home village."

Are there other possibilities?

While Canyon remains our strongest suspicion, when we reached out to Luca to ask why he was in Peille, he replied with a picture of Loris Vergier and said, "riding with this guy". In the photo above (taken from Luca's stories) you can also see he is wearing a Bontrager helmet, so it's entirely possible he's reuniting with his former teammate at Trek. A final consideration is that Mat Gallean, manager for RockShox Trek team also lives next to the Blausasc DH track and we know that team was testing in the area. Plus Luca used to be a TLD/SRAM athlete so it's a setup he knows well.

However, given that Luca is now openly posting about his motocross day with Loris and the RockShox Trek team is more of a development setup than a factory team, our suspicions still line up with Canyon. Canyon declined to comment.

kevbine (Dec 21, 2021 at 7:08)
- Laurie to Syndicate and Luca off to Canyon. And Kona probably saying farewell to World Cup DH altogether.

bonkmasterflex (Dec 21, 2021 at 8:38)
Sad but true about Kona. No one is selling DH bikes except for Commencal... at least we'll have an even playing field when all 60 riders are on the same bike.

bonkmasterflex (Dec 22, 2021 at 5:50)
@jomacba: Why would anyone buy anything BUT a commencal? Best value for money, and clearly best performing.

jomacba (Dec 22, 2021 at 6:48)
@bonkmasterflex: I have to fully disagree with you pn bot of statements. Commencal bikes typically have a poor resale value compared to many other brands, I would argue that a Santa Cruz would be better value due to the lifetime warranty on frame, small parts, and bearings. After sales service is in my experience one of the poorest in my area for commencal. I would argue that commencal has created one of the best performing bikes out there, but to say it IS the best? That's a bold statement.

BikesBoatsNJeeps (Dec 21, 2021 at 4:48)
Nope, no, nope, can't be... no way possible that he went to Europe (he has a EU passport I read once) with his gold medalist girl friend to enjoy some time off before training ramps up.

andraperrella27 (Dec 21, 2021 at 8:01)
lot of quiet stuff happening over there. theres also been some interesting stuff about what people have been seeing at windrock for the intense boys

pourquois-pas (Dec 21, 2021 at 8:59)
The only thing we can confirm from this article is that Luca forgot to pack a nose hair trimmer.

enjoyriding (Dec 22, 2021 at 4:04)
Nina just bid farewell to her "Team" (supporting friends).
Maybe there will be the first female rider at Syndicate now.

Timmybike (Dec 21, 2021 at 1:57)
Looks like Trek with that helmet and riding with Lori's another Trek rider... wouldn't be surprised if Lori's told him how good the high pivot metal bike is compared to santa cruz plastic

MutleyAdams (Dec 21, 2021 at 8:10)
He's cheating on Yolanda and has been spotted bts's with Miss Elegante Offen..https://youtu.be/yjBX-LgZ4hY