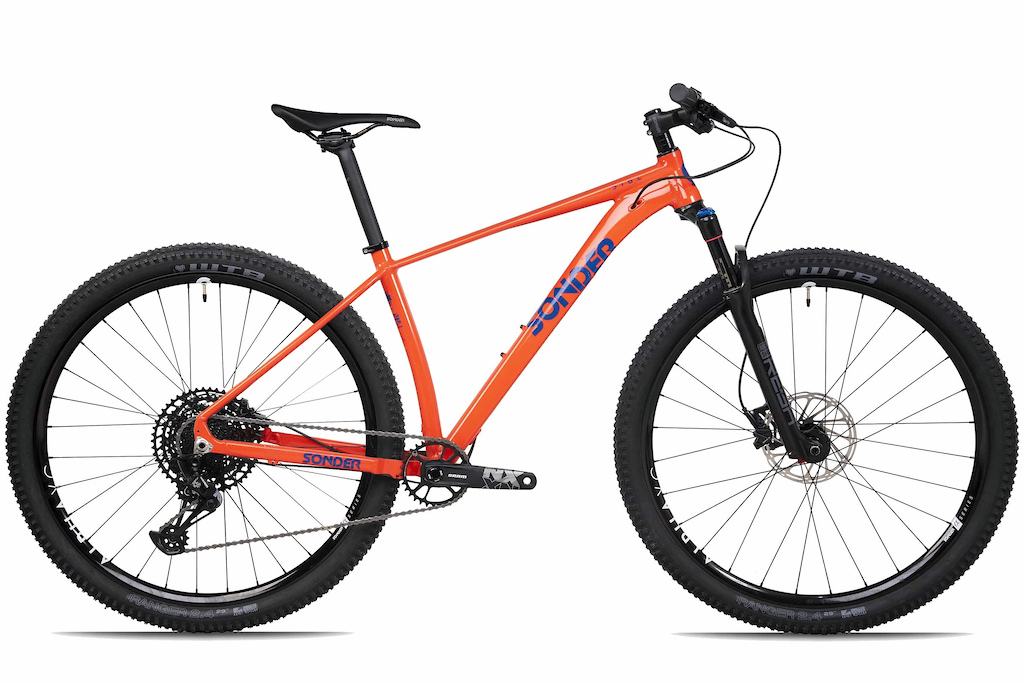 Mountain biking is no stranger to confounding categorisations. Remember SuperXC or Overmountain from back in the day? Or maybe a more recent example of ebike specific tools? In fact, we've got our own sordid past here and made one of our own that unfortunately caught on in Downcountry. Well, another category has now popped its head above the parapet thanks to Sonder's Dial hardtail - Aggro Gravel.

Sonder describes the Dial as an "Aggro-gravel bike, built for speed and efficiency. Beat your best time, cover big miles on a long day out, race to the podium. With its lightweight aluminium tubeset and 100mm travel up front, the Dial gives maximum pedalling efficiency whether you're riding 200kms at Dirty Reiver or racing flat out." It is apparently "designed for riding cross-country trails without compromise. It gives more confidence than a gravel bike and a more direct feel than a trail bike."

Take a look over the spec and geometry charts though and it looks like a fairly regular, entry-level XC hardtail. A 69° head tube angle, 74° seat tube angle and a reach of 455mm in size large makes the geometry so regular it's barely worth mentioning. On top of this, the spec consists of a 100mm fork with a mix of own-brand parts, a rigid seatpost and solid kit from RockShox and Shimano at a competitive price. Basically, this is equivalent to the bike most of us probably started off riding that took us from bimbling down local trails to many misguided adventures as we grew into the hobby. But if it looks like a mountain bike and it quacks like a mountain bike, why isn't it called a mountain bike? 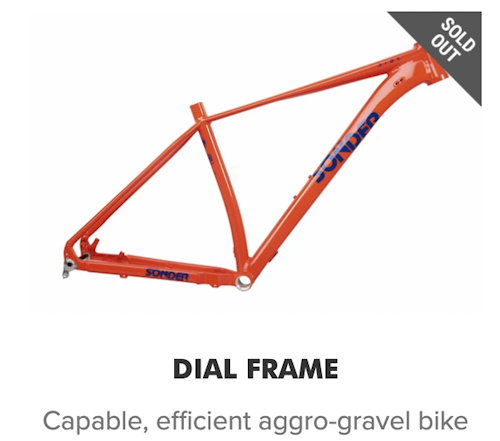 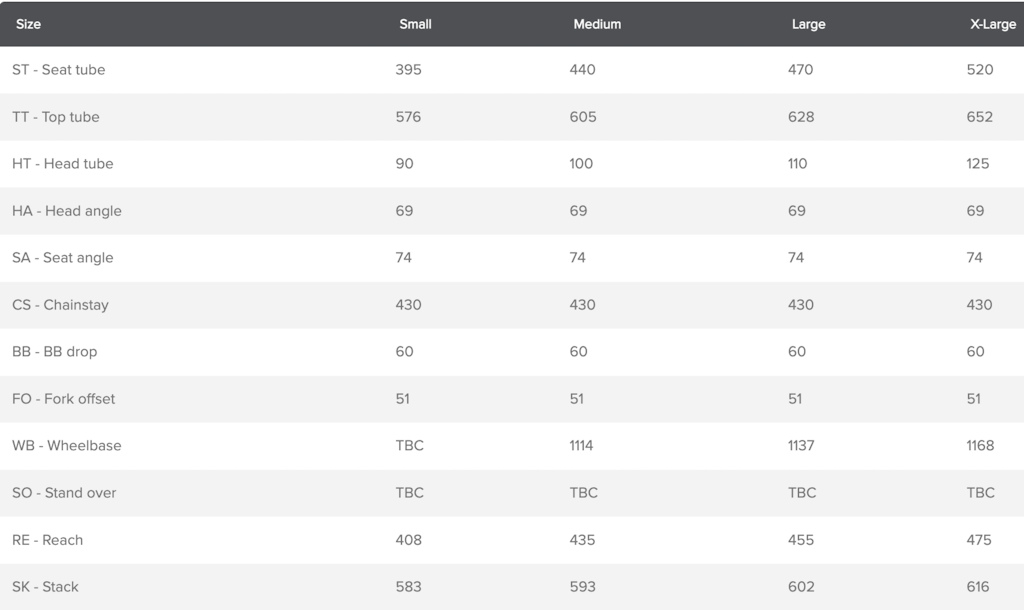 When we reached out to Alpkit, the parent company of Sonder, they told us that the term originates from a Singletrackworld podcast and is a bit of a tongue in cheek reference to phrases like "groad" rather than an attempt to create a new category. Sonder describes its Camino gravel bike as the mountain biker's gravel bike and there have apparently been a number of enquiries about a flat bar version of it. Sonder took that a step further with a suspension fork and the Dial was born.

While XC race bikes are getting more progressive (check out the 67.5 degree head angle on new Scalpel HT for evidence of that), and trail bikes are getting more enduro, Sonder wanted the Dial to fill the gap left behind. It purposefully bucks the longer, lower, slacker trend and is more aimed for "wheels on the ground" riding with narrow bars and a nimble feel. They want this to be a bike that helps you learn skills while not getting you too far out of your depth. Think about the kind of fast, smooth riding you get at British trail centres and you're probably picturing the intended terrain for this bike.


The Sonder Dial range can be bought as a frame only for £399 with build options starting from £1,099 for the SX Eagle model up to £1,749 for a Shimano XT spec. The bikes are available to order now with delivery expected around the start of April, just in time for the aggro gravel season to kick off. More info can be found here.

But anyway, isn't this all semantics? What is a gravel bike? What is a mountain bike for that matter? Isn't this all just marketing? And aren't we all playing into their hands by talking about it? Is it even going to catch on? Does anyone care? Probably not even worth commenting on... right?

"Endorphins are the only thing that gets me high, bro." Silly leg-shavers.

What do you think?

calmWAKI (Feb 10, 2022 at 15:55)
All I can say is that shroomgravel or edible gravel are one of the best forms of cycling in existence. So please don’t laugh. They require good route and time planning, then discipline and experience in consumption. But when done well, they are an amazing activity. The only downside is that you won’t get physically stronger out of that.

silentbutdeadly (Feb 11, 2022 at 3:01)
I've been calling my Niner RLT the 'dirtroadie' since 2015. My gravel bike is a steel 29er XC hardtail with pre-enlightenment geometry...one of millions of old (now unrideable?) XC bikes that must still be out there somewhere.

BillT999 (Feb 10, 2022 at 13:18)
Looks like someone is trying to move some 5 year old xc frames they found in the back of the warehouse and told marketing to figure it out

Mix 'em in wherever.

(Transition Spurs tagline on their site)

Also you can never forget Gluten Free Range Hella Down

Big old middle finger to trials riders on that list

(Transition Spurs tagline on their site)"

that's a radio station not a bike.

Fat
Mid Fat
Plus
Mid Plus
Tandems
Tridems (yes Santana and a couple others have made 3-person examples)
Trikes
Reverse trikes
Recumbents
recumbent trikes (and yes recumbent reverse trikes)
plus all the bikes meant for disabled/partially disabled riders.

And there's all the bike cyborgs.. Back in the 90s I remember there was an american racer who made his own prosthetic limb out of a manitou suspension fork so he could have "forearm" shock absorbtion when riding.

Personally, I do a lot of GravelCountry, but that's just because the dirt trails are a muddy mess right now. When it's cold and nasty out, I do TrainerCountry in the basement.

zacjob (Feb 10, 2022 at 13:18)
When you run out of things to sell, trick them into buying something old and terrible for a new purpose. The circle of marketing.

playdodiet (Feb 10, 2022 at 15:12)
Just did a quick glance at the geometry differences between this and a Rockhopper. The biggest difference is a 10mm shorter chainstay (430 vs. 440) and ~30mm shorter stack on the Dial. Everything else is just a matter of 0.5-degree angle differences and 2-3 mm lengths.

cerealkilla (Feb 10, 2022 at 13:11)
Better get this sorted fast. A big player like Sonder could turn the whole market upside down!

ilovedust (Feb 10, 2022 at 14:05)
Last time I knew, Sonder (Alpkits bike brand) was from the same stable/designer as a number of other spin off brands from non-other than Planet X. Now like them or loth them, Planet X has been knocking out on trend budget mtb’s in one guise or other for a quarter century. Id also add that nearly every world brand has clambered over itself to put out steel hardtails of late. Planet X On-One 456, etc were at that party before pretty much everyone. Before it was even a thing.
Either way Sonder is big into bikepacking and this has that all over it

cerealkilla (Feb 10, 2022 at 18:31)
@ilovedust: Exactly, they do spin-offs and knock-offs and budget bikes. They produce nothing that establishes trends, they just follow and copy. Aggro gravel has as much chance of taking off as recognized thing as tuna-mint gelato.

ilovedust (Feb 10, 2022 at 19:42)
@cerealkilla: it’s opposite to that point but either way technically in this instance you are right because what you are looking at hear would, 10-15 years ago, have just been called a ‘hardtail’.

hambobet (Feb 11, 2022 at 1:55)
@cerealkilla: I don't know, the camino has and is one of the best reviewed and good value 'gravel' bikes on the market - they pushed the big tyre clearance, slacker geo and wide/flared bars way before a lot of the big brands updated theirs. Plus they update it nearly every 2 years - the new version looks very good indeed, and still for less than £1500

Danfsims (Feb 11, 2022 at 4:57)
@vladtheinhaler: 100% correct - STW is the most Boomer MTB publication of them all. The forum is just boomers saying they never jump and asking how fuel efficient different models of Audi cars are...

JonnyTheWeasel (Feb 10, 2022 at 13:54)
"Think about the kind of fast, smooth riding you get at British trail centres and you're probably picturing the intended terrain for this bike."

Will6131 (Feb 12, 2022 at 17:10)
So they finally figured out that "aggressive" gravel tracks are best ridden on a XC MTB that has similar geometry to the older MTBs that were designed to excel on the same kind of terrain...no kidding?
The whole gravel movement is basically road cycling moving to XC in degrees. Which is what MTB was in the late 80s.

blackpudding (Feb 11, 2022 at 0:38)
@office: and landed an article on pinkbike with high engagement. Some marketing guy has a sore palm from all the high fiving

Trail-road. (And junctions are then called trail-road crossings and school groups have to stop completely and look both ways even if the bell isn't ringing)

MarcusBrody (Feb 10, 2022 at 14:22)
I actually was looking at one of their drop bar gravel bikes as a commuter today. It seemed good for the price and with it fitting near MTB sized tires, I could ride it on the dirt road hiking approaches that I now ride on my Bronson rather than my skinny tired commuter.

aka-bigsteve (Feb 10, 2022 at 15:09)
What goes around, comes around. This measures up quite closely to my DeKerf Team, 2001 vintage, other than the 26" wheels. I'm still riding it, by the way, usually outfitted as a "gravel bike" with 1.35 Schwalbe CX Pro tires. When mounted with a proper set of fast 2.1 xc knobbies, it's still at least as much fun to ride as my "up to date" hardtail on tight twisty moderate singletrack.

Pick a headline and... stick to it.

BadWeevil (Feb 11, 2022 at 0:25)
I like the fact that Sonder prices are still sensible and offer value for money in a world when the equivalent bike from a big name brand is 30% higher in many cases.

NWintheUSA (Feb 21, 2022 at 21:33)
The raddest biking ever was F1 BMX in the 90’s.
Twisty turns on a coarse marked by cones on a parking lot.
Popular (12 people!) for the crit crowd.
Haro, Diamond Back and others made the bikes.
They are a geometric wonders!

sherbet (Feb 10, 2022 at 14:20)
This is the greatest. For the second time in a week, Pinkbike, you've made an incredibly silly and excellent article. Thank you for both the jokes and the abrupt candor. Y'all rock on!

astralzombie (Feb 10, 2022 at 19:45)
Pretty sure this bike already exists at every Trek/Specialized/Giant chain store, but hey, there’s a sucker born every minute!

SintraFreeride (Feb 10, 2022 at 23:25)
Pinkbike complaining about semantics is rich! You have pushed bs categories like down country, trail and enduro for years! A bike goes up and downhills is an XC bike or a mountainbike not matter the amount of travel or geo. A bike that goes downhill only is a downhill bike again in spite of travel A bike that is only used on the road is a road bike etc

Ajirruti (Feb 11, 2022 at 6:04)
looks like a trek marlin ... these roadies are finally closer to evolving to their final form of mountain bikers. FLY PEACOCKS FLYYYY!

Back then we would’ve gone SS and scoffed at that cassette range.

weebleswobbles (Feb 10, 2022 at 15:02)
Like e bikes they should all be piled in the desert and used for military target practice

Imagine the the marketing department sitting around the table trying to come up with this original idea....

bananowy (Feb 11, 2022 at 7:03)
Yeah how stupid of the marketing department to take a bike that would normally get zero interest from PB and get it plastered on the home page with soon to be 200+ comments. Not doing their job at all, right?

bananowy (Feb 11, 2022 at 6:53)
Except they got this basic xc hardtail on the PB front page with super high engagement. Seems to me like the marketing team did exactly what they wanted.

SlipperyWeasel (Feb 11, 2022 at 12:46)
I love that someone is filling the gap. Seriously, I'm SO sick of slack head angles. Give me a quick handling, light, nimble and efficient whip. Give me a bike you actually have to ride, not something you just have to hang on to! Stupid terminology aside... Even pure XC race bikes are way too slack these days.