$400 USD
I bought this locally just a few weeks ago and found out on the first ride the fork needs service. I'm assuming the seller was unaware :-0 Here it goes: The fork lost pressure during the ride while I was playing around with the fork settings, so, it may be related to a certain setting. I pumped the shock back up and it held pressure fine, and a week later is still holding air, so go figure. I would assume the problem will come back if it's not fixed. These shocks are no longer serviced, so, PLEASE DON'T BUY THIS BIKE IF YOU AREN'T FAMILIAR THIS MODEL!! I don't want to deal with the fork issue. And, I don't want any bad karma, so, I'll be straight up with the condition of the bike, as far as I know: -The fork, beside losing pressure, seems to work OK, but, it's a bit sticky. I'm assuming the main compression cartridge has a faulty seal. I don't know how this shock works exactly, so, can't explain how it suddenly lost pressure in the middle of my first ride, but then held pressure after being pumped up again, for the rest of the ride until now. I haven't seen any oil leaking, which could be a good sign, or could mean all the oil has already leaked out? -There is at least one rebuild kit for the fork (Specialized e150 SL) online, but, I don't know of a shop that can service or rebuild the fork. It was recommended to me to replace the original fork with another one that can be services (ex. Fox 32 Float 140mm w/ 15mm axle). The hub on the wheel is also proprietary Specialized, so, essentially the wheel needs to be replaced also. Specialized doesn't carry replacement parts and is apparently a crappy company that sells $5,000 bikes to rich people that throw them away in 10 years. I've officially joined the Specialized hater club, after being a loyal fan most of my life. -New shifter cables/housing, drive train works good (3 x 9 SRAM/Shimano). -New brake pads, brakes work good but might need a bleed or further tuning. I found the brakes (upgrades?) weren't mounted correctly, about 1/4 of the old pads weren't hitting the rotor, so, I changed the brake mounting hardware and it seems OK now, but, the front brake rubs a tad (I think some fluid needs to be removed from the front brake, or brake needs slight alignment). Should be a minor issue. -The rear shock seems to be working, no visible leaking, but I haven't had it long enough to vouch for it, so, I'll leave that up to you to judge. I assume it could use a servicing. -I cleaned the bike up, tuned it and trued the wheels as best I could. If I don't ride it again before selling it's in clean and overall pretty nice condition for its age. -One of the water bottle mounts has a broken off bolt in it. -Paint chips but no major frame damage I've noticed. If you have a solution for the fork, could have yourself a sweet bike for a good price.

$400 USD
2001 Intense Uzzi SL. I only recently bought this bike here on Pinkbike, but, have an injured wrist and need surgery, so won't be able to ride it. It was previously listed here as a 99' model, but, when I noticed it had a replaceable derailleur hanger, I confirmed with Intense Cycles that it's a 2001 model. It's a sweet bike. serial number: OM111110 (as best I can tell, photo attached) Frame is adjustable (head angle, top tube length, and wheelbase). Changed derailleur housing/cables and upgraded to Elixir 5 brakes (used)(some photos of complete bike still have old brakes). Front shock was serviced last year by previous owner. - XTR derailleurs - Fox Vanilla 125 RL fork - Fox Vanilla RC rear shock - XT crank - Avid Elixir 5 brakes - Carbon riser handlebar - Chris King headset Let me know if you need any further info. Below is from the description, from the previous owner that spent more time riding it. This has been one of the most enjoyable bikes I've owned. She shows some signs of use and has her battle scars, but she's still lively. Fresh bushings and a complete fork rebuild last season. It would be an awesome project to strip her raw and put a brushed finish on the frame. New chain rings and rear cassette. Buyer pays shipping, we can discuss the best method. It was shipped to me with BikeFlights which cost $70 from the East Coast to Nevada. 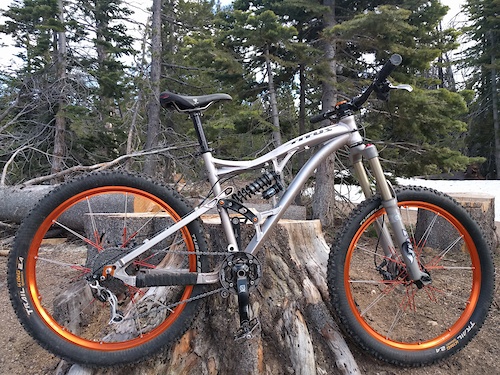