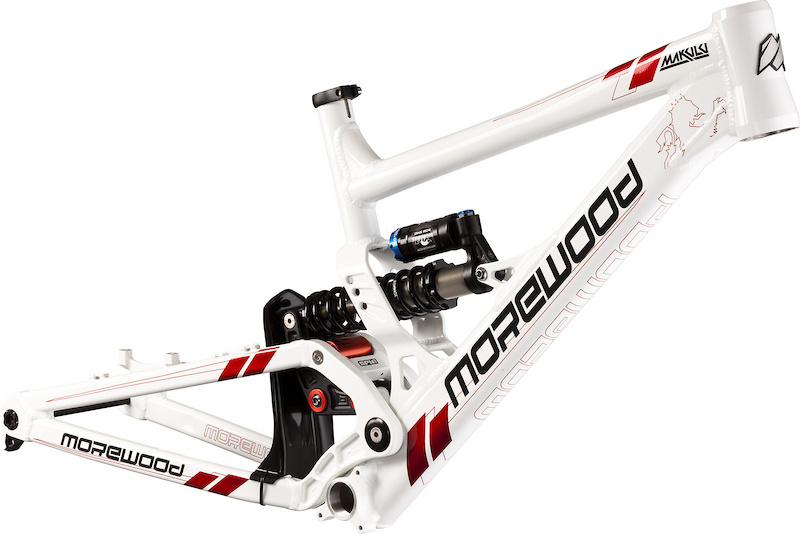 With redesigned suspension, sizing, graphics, and top tube for 2011, the Morewood Makulu fits the downhill specific /downhill race machine niche. A previous Makulu review from Dirt Magazine claimed "it separates you, the rider, from the ground" and established the Makulu as the new benchmark for downhill race frames . Does this claim stack up ? Here's some background info to help you choose your new downhill frame for 2011, and some insight into the complex buying decision for a new high end downhill frame.

Background:
The Makulu is a race bred pure downhill bike. This is not multi purpose do-it-all downhill/freeride/slopestyle overlap territory, so if you're considering buying a Makulu it is advisable to keep in mind the intended purpose of this rare South African exotic.

Morewood is based in Pietermaritzburg, South Africa, and has a ten-year pedigree of technical development though rigorous rider testing and constant product R&D. The Makulu has developed rapidly since being launched, and the 2011 model has a few worthy tweaks. The top tube is now straight, adding some structural integrity and is now shared with the Makulu's little brother, the Kalula. The suspension has been made more progressive, helping avoid bottom out and creating a more responsive feel to the ride. The frame now has a new decal design, with clearcoat laid over top, making the product more resilient to your typical shuttling, uplifting, crashing, and general extreme bicycle wear and tear. There are now three frame sizes instead of two (small-medium-large) for better choice of fit. The frames have been thoroughly race-tested in South Africa, France, and Canada by dedicated race teams, and product development came from none other than Nathan Rennie. Current race teams include France's BlackMountain Morewood United and Lama Cycles DH team.

If you read this with interest, but a full downhill rig isn't your thing and you fancy something more playful it may be worth checking out the Makulu's little brother the Kalula: http://www.morewoodbikes.com/bikes/freeride/kalula/ 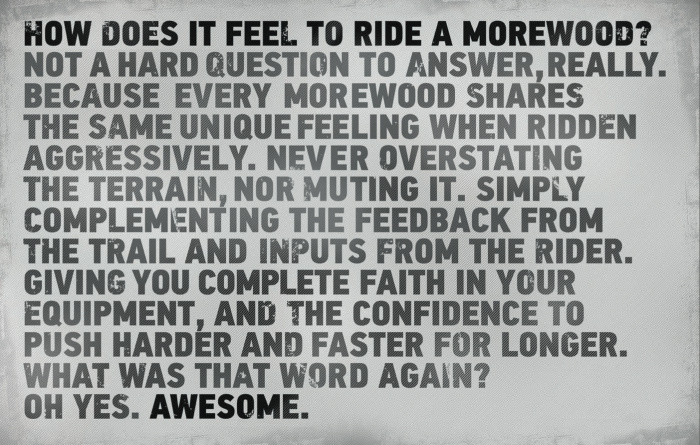 Technical:
The Makulu has 8” of travel with a single pivot linkage driven suspension. SPi2 or “Stable Pivot Interface” is the Morewood version of the linkage driven single pivot system, a very simple arrangement of rocker plates and pull system, using refined pivot caps to eliminate the need for a pivot axle by incorporating them into the cap itself. Morewood's unique selling point is a perfectly tuned low leverage ratio suspension (2.3:1 for the technically minded). This system prevents changes to the wheelpath meaning that despite having a linkage, the frame is still single pivot, with the link simply manipulating shock rate. No worries about chain growth and a very simple, predictable feel, all the time. Simplicity has been achieved. 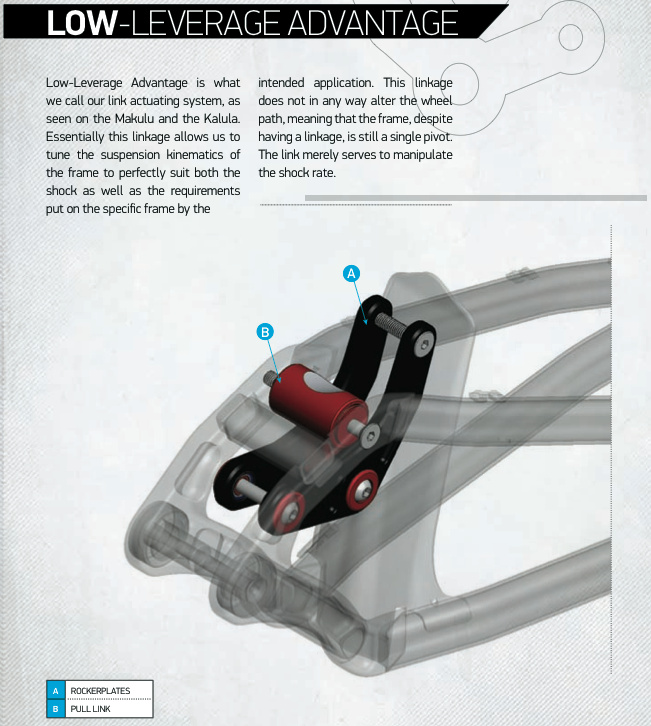 Small stutter bump or square edge bump compliance is claimed to be excellent, and tracking over rough rocky terrain actually instills acceleration, the level of bump absorbance is so good. This helps track the rough terrain very well, holding down speed and ensuring the pilot isn't thrown off track. Basically in downhill racing, it's all about maximum speed and minimum distraction to create full control and good lap timing. Being a full downhill bike, don't expect too much new school pop and funschnazz. This is all about pure speed, balance, poise, and traction. Though the slightly increased progressiveness of the shock will help create a bit more pop and liveliness over the 2010 version, as will a reasonably light build, don't get too excited if you're someone who likes to rail smooth fast jumps trails all day looking for an airborne freeststyle stunt machine. The Kalula would certainly be more suitable for this task. 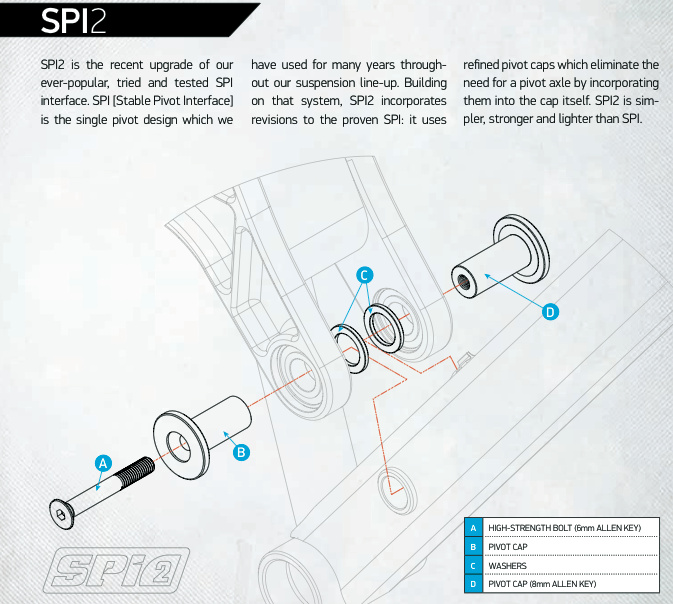 What appealed to me about this bike was most of the previous points; overall simplicity of design and a very simple clean linkage driven single pivot, with Enduro Max bearings, meaning less maintenance and a tighter, and lighter, ride. The lack of complexity makes for a light frame, meaning a Makulu can be built with mid range parts to about 37.5lbs. Not bad at all for a full DH race rig, and so there's the possibility to manual, air, pop or generally chuck around a 37.5lb DH bike without needing a compromise frame.

I was coming off a VPP system, and while having no complaints at all about VPP, it can't help but improve your riding and general ability if you're able to get more experience on different suspension platforms. My biggest fear was pedal pop and brake jack. I was lucky enough to be able to thoroughly research the bike and by speaking to a few 2010 Makulu riders from France, South Africa and the UK, nobody had a bad word to say about pedal bob or brake jack. Coming from first generation VPP to a single pivot design, I have to admit that concerns about brake jack and pedal bob were top of mind. Thankfully my doubts were diminished at this early stage.

In fact everyone I spoke to was stoked about the Makulu, from racers to weekend warriors and everything in between. I had been looking at the Makulu for a while, as an alternative to an Intense M9, so I spoke in depth to owners Rich Stevenson and Russ Morton of Sovereign Cycle, a local Morewood dealer in British Columbia. Russ had been on the bike for a full season in the 2010 guise and had nothing but good things to day about it. My specific needs were for a bike that could handle steep rough natural singletrack, ridden on bike parks such as Silver Star and Sun Peaks, with gnarly twisty rooty steep aggressive terrain, and shuttle spots of a similar nature in Kelowna and Kamloops, British Columbia. Often dropping 10-20,000 feet of terrain a day, I had to have something that was right for the job, and which would stand up to a full 500,000 vertical feet season of long hard days of riding.

Both of the Sovereign Cycle guys knew my riding preference and skill level, so based on their advice and input I researched Morewood much further. What I found was that everyone involved in Morewood was very accessible through many different channels, and were always willing to offer information or advice, and it was easy to hook up with other people to help validate my choice of frame. I confess that I do like smaller companies who are working hard to push themselves on, and I'm more comfortable giving them my dollars that a bigger corporate brand. So overall it was a really good fit for my needs; with such a niche product, it's important to have people who are accessible, forming a community who are all stoked to support the product.

At time of writing, I'm waiting very excitedly for my frame to ship out west from Quebec. I'm confident that I undertook my research thoroughly, in fact it was impressive how helpful everyone involved was. I'm intrigued to see how a light build of around 37.5lbs tracks through the rough stuff, yet excited at the thought of something light that I can pop and throw around.

Since I haven't thrown a leg over her yet, I'll be following up with an initial impressions report. I can guarantee you the bike will be fully tested on some significant and challenging terrain. If 2010 is anything to go by, I'll be dropping in the region of 500,000 vertical feet this year. So if there's a possibility of anything breaking, shaking loose, dropping off or cracking, I'll be pushing this frame to it's limits.

All grassroots support is very much appreciated - big sincere thanks to Justin Macknish, Rich Stevenson, Russ Morton and Amy Rosenkrantz