END OF AN ERA: The 10th Annual Mount 7 Psychosis

Jul 19, 2008 at 18:30
by Leah Duperron
Tweet
The weekend of July 5th-6th, 2008 marked the 10th Annual and Final installment for the World renowned Mount 7 Psychosis in Golden, British Columbia. Psychosis, which has been dubbed “the world's most demented downhill race” spans a total of 4000 vertical feet from the top edge of Dead Dog to the bottom of the Snake Run. Over the past 10 years the race has continued to grow and be graced with the presence of many notable Pro Racers including Ironhorse’s own 2007 UCI World Cup Champion Sam Hill, Tyler Morland, Santa Cruz’ Nathan Rennie, Chris Kovarik of Intense Cycles and Coves Bikes’ Stevie Smith. With every year that passes- records get shattered and bones get broken as racers continue to push themselves to the brink of physical and mental exhaustion for the sweet taste of Mount 7 glory.The uniqueness of this event lies not only within the complexity of the technical singletrack that winds down the mountainside, or with the fact that it takes the Worlds fastest racers almost 13 minutes to get down, or even with the fact that it includes a long, steep and unforgiving uphill hike-a-bike section… As stated by a multiple-time Psychosis racer “The distinctiveness of the Psychosis Race lies in the fact that it can be compared to that of Baja 1000- one of the only races in the world where by “Joe Nobody” has the opportunity to shred the same knarly race course with the likes of the worlds best”.

This year over 195 “Joe Nobody’s” showed up to race some of the Worlds finest for the Pro “Psychos” Category. Teams and Racers came from all over Western Canada and as far as overseas to take part in the final chapter of the Psychosis story. The story of this insane downhill race has been around the world and back- featured in Bike and Decline Magazines and showcased in the new Collective movie Seasons. Hearing about the steep scree section aptly nicknamed Dead Dog, a massive road gap and the rocky, rooty merciless segments RTC and Wet Dream are enough to make anyone shake in their boots. With that being said there is an art to racing the Psychosis track in Golden- an art that has been mastered by the likes of Tyler Morland, Sam Hill and this year, Chris Kovarik who have all stood atop the podium.

With every year that passes the track gets beat down, eroded and ridden like nobody’s business-this year’s 10th Annual Mount 7 Psychosis was no different. Although the course saw a fresh covering of rain over night prior to Race Day, most racers described the conditions “like shredding on a powder day… where normal rules didn’t really apply”. Even having to walk one of the steepest sections due to utterly “greasy” conditions in the early morning didn’t phase the racers. By noon those greasy sections had dried enough to produce some seriously tacky dirt that allowed for the fastest race times in Mount 7 history to be recorded. Sam Hill set a course record of 12:48 in 2007, a time which seemed unattainable by any other living, breathing human being. However, on Saturday, July 5th history was re-written when that record was not only be beaten but outright smashed by the top 3 racers that included Tyler Morland (3rd) of RockShox/Avid/Truvativ/SRAM, Nick Quinn (2nd) of Calgary Cycle/ Oakley/ Dakine and Chris Kovarik (1st) of Intense Cycles/Gold Coast MTB Club. All three racers upped the ante and performed near-perfect runs down the relentless Downhill track with skill, endurance, strength- and in the case of amateur racer Nick Quinn- a whole lot of determination and heart. 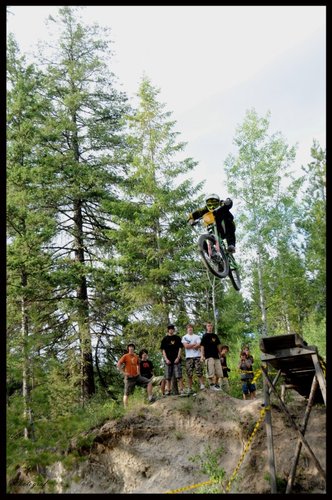 Putting together a near-perfect run on the Psychosis track is no easy feat and if you ask anyone who has raced it before they’ll tell you that it is nearly impossible. Maybe there was something in the air that day, but all of the pieces of the puzzle appeared to fit together for Morland, Quinn and Kovarik with racers like Sam Hill of Ironhorse, Andrew Mitchell of Cove Bikes, Curtis Keen of Specialized and Brett Hornfelt of Calgary Cycle not far behind.

Calgary Cycle racer Nick Quinn is no stranger to the Psychosis Race, in 2006 he finished 4th behind Morland, Rennie, and Kovarik and in 2007 he finished 6th. This year everything seemed to click just perfectly for Quinn who has been so close to the podium in the past. Quinn races for the Calgary Cycle Downhill Team who are sponsored by Santa Cruz, Troy Lee Designs, Dakine, Chromag, Oakley, Thomson, Block 8, Chris King, Mavic, Pioneer, Stripe Tech and Visions. The Calgary Cycle Team continued to be a presence at this years Psychosis Race thanks in part to excellent finishes by Quinn and Hornfelt. Luke Stevens and Cody Ratte two of the up and coming young guns placed 2nd and 4th respectively in the 5K Race. 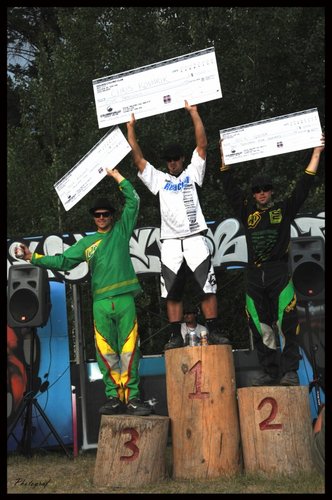 So as the Psychosis era comes to a close, a void will definitely be left in the Downhill Race World. The Golden Cycling Club has done a spectacular job over the past 10 years to have this event evolve to where it is at today. Countless hours go into the planning and organizing of every aspect of this race and without their dedication this race would never have become what it is and will go down in the history books as.... legendary.

“Psychosis will be missed by many in the coming years. It’s sad to see her go, but she had a great run!”

quinner (Jul 23, 2008 at 8:20)
The story is this...I work full-time as an accountant and race on occastion when time allows. I don't race WC because in Canada there is only 3 races a season to aquire UCI points and I seem to have shit luck when it comes to racing in Quebec, so whatever, that's racing.

"Pro" in my mind are the guys getting paid to push the sport. I'm no "pro" by any stretch. As much as I'd love to race the WC, I don't have the time or the money to be running around North America Chasing UCI points. Heck I headed out to the Nationals last week @ Mt. Saint Anne an proceeded to crash, crash and crash my way through qualifying and then double flat in my race run...so I guess WC racing just ain't in the cards for me. Whateva'...that's racing. Still stoked on Psychosis, but pretty sad it will be no longer, that has always been my favorite track. Morland I'm sure is in the same boat...he F'n loved that track, hence his crazy good results over the years.

undercoverfreak (Jul 23, 2008 at 2:49)
someone quickly remind me why they are stopping it? I can't seem to find the reason in the text.

ibisrox (Jul 23, 2008 at 7:28)
Q'ner epitomizes the true spirit of the sport and proved that he should be getting the big bucks and exposure that Sam Hill gets. I think the word "amateur racer" should be erased, because he's a pro all the way.
Psychosis will live on and in different forms in the future, but none will match the day it all came together for Nick.
In fact the whole CC team showed they are a force to be reckoned with!

emcgough (Jul 23, 2008 at 8:08)
What's the story behind Quinn? I haven't heard much about him, but he must be good to be on the podium in a race like Psychosis. He doesn't appear to be on the start list for the WC this weekend, and it's in Canada? If you're not even racing in a world cup in your home country, it's unfair to say he deserves the same pay as Minnarr, Barel, Peat, or as you said, Hill.

This is in no way meant to be negative towards Quinn. Seems to be an awesome rider and an awesome guy who has the respect of the locals. But just think of how much guys like Steve Peat do for their sponsors in terms of publicity. Unfair call to be comparing Nick to them in terms of salaries.

emcgough (Jul 23, 2008 at 8:55)
Yeah, fair comment. It's the biggest catch-22 situation, when you are involved in a sport which involves huge costs, travelling and alot of time, and even when you're up with the best, there is not that financial support available. And as you said, racing is racing... you could blow $20,000 following the NORBA series around and have a few bad runs or a big crash, and it has all gone to waste.

It's a shame to see Psychosis go. Races like this are more interesting than the circuit in a sense, as you get to see the world cup "pros" race against the lesser know talented locals. As you can see from the results here, the biggest difference between them appears to be the financial support, rather than actual riding ability. It's a shame.

Anyway good luck with your riding mate, and congrats on being the better man on the day against last year's world champ. Pretty hard to top that effort!

kootenayrider99 (Jul 23, 2008 at 16:05)
Here is a quick Mt7 psychosis history lesson.
Scott Hicks (a golden local DH pro racer) started Psychosis (with the help of yours truly and a couple of shuttle truck loads of volunteers) with the idea in mind of giving all DH racers, pro or whatever, the chance to rip a long sick singletrack descent without all the bs that went with the typical DH race scene - shitty courses and shitty prize money. It was really a massive toonie race with all proceeds getting shared between the racers. Over the years the popularity of the event led to Red Bull getting involved and hence the big names, but the spirit of the event lived on with the massive volunteer effort of getting the thing organised, and the chance for 'joe nobody's' to race alongside the best in the world.
Nick Quinn's result is testament to the legacy of the race in showing that every dog can have his day. I rode with Nick one day in Kamloops years ago when he was an up and coming rider and remember seeing him tear a crazy fast line down Rose Hill and I knew he would be racing at the top level in the future.
Congrats to Nick and every rider to race the psychosis - don't be surprised to see it reincarnated some day!

see you on the long weekend quinner! and yes the boy is fast folks but its a lifestyle not a job which make him even better ..

When i went up there, i was told that the man who used to shutle doesnt anymore.


but yea thats a bummer.

goldenizen (Jul 23, 2008 at 9:20)
There are no longer any commercial shuttles up Mt.7. Bring your own truck. Or go across the valley to Kicking Horse Bike Park which has a 3700 foot gondola which lets you keep the gas in your tank.

pimpedmanik (Jul 23, 2008 at 11:12)
i wish it wasnt the last race my first time out was a blast sadly it will be my last race i think someone or a company should step up to the challenge for next year

jazzeph1 (Jul 23, 2008 at 16:52)
so why are they stoping haha ive read the whole story and every comment and still dont know the reason