The climb from Moiry to Becs de Besson

Härdöpfustock - Our first three days saw us explore Val d'Anniviers. This next leg will see us cross from one valley to another; from Anniviers to Val d'Herens. However, it won't be by the ubiquitous Swiss yellow Post-Bus or by train or by tram. This route crosses high alpine climbing from 2250m starting at Switzerland's biggest lake Lac de Moiry. The ultimate goal of today's leg is to get to the Becs de Bessons cabin at 2985m where we will stay overnight before descending again to valley floor. Joining us on our day 4 and 5 of our trip led by Martin of Alpine Trails is Alex Boyce of MTB-Mag International who secretly loves bib shorts.

The goal is to present us with the Swiss soft-core wilderness experience. Bikepacking in Canada usually involves sleeping in ditches under a tarp and carrying anything on my back including all my overnight gear. Even Swiss overnighters are relatively civilized as Cabane Becs is well-appointed with beds, a heated cabin, food, beer and civilized facilities. 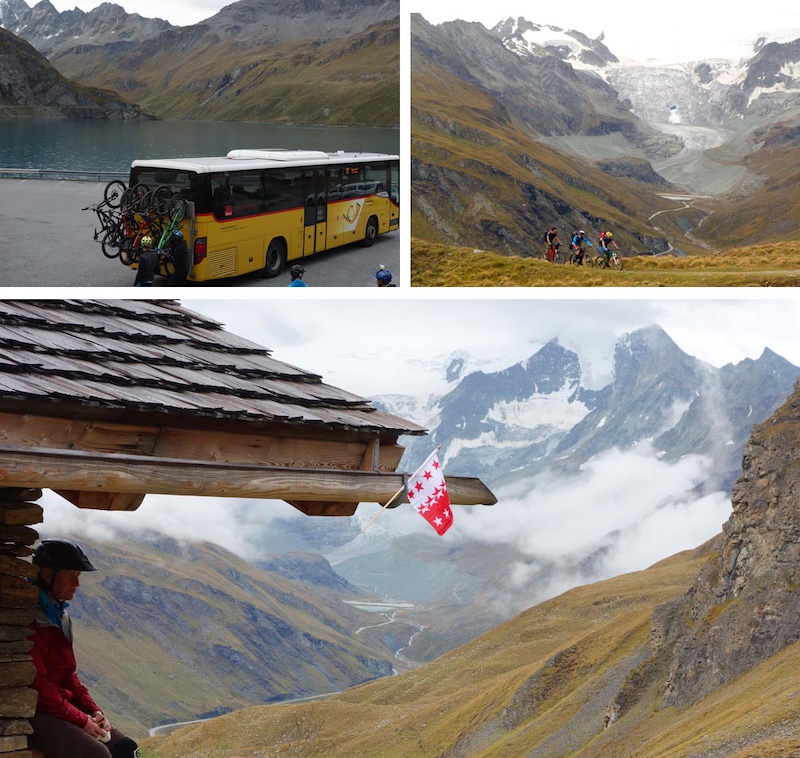 We take the PostAuto bus to Moiry Lake from Vissoie. The climb is mostly road of a good grade, the weather was cool at this elevation but was promising 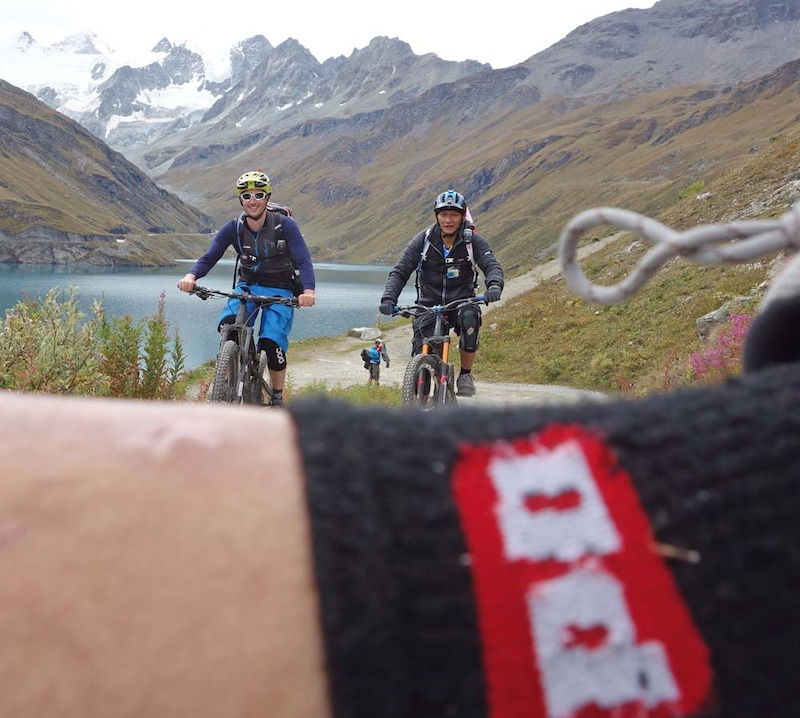 The Moiry glacier was watching us as we climbed 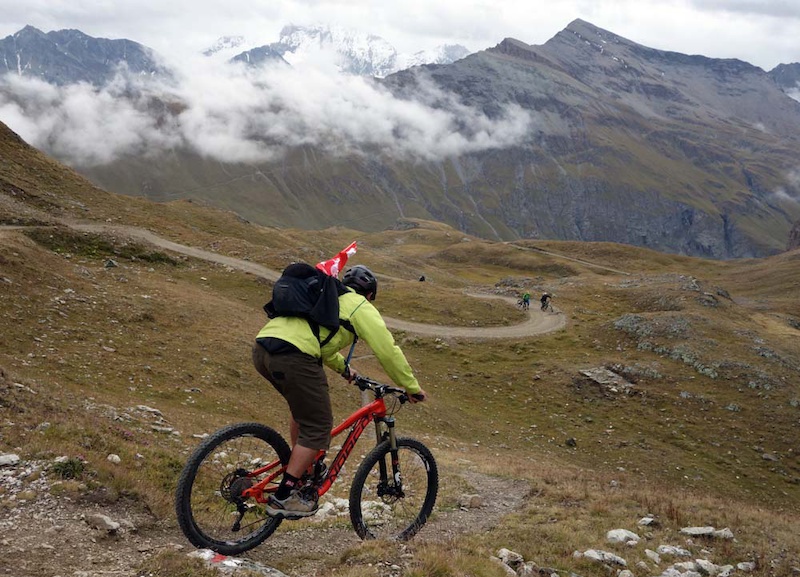 
As with all things Swiss there is a Post-Bus assist. We begrudgingly leave Hotel Bella Tolla at St Luc and coast down the road to Vissoie on our bikes where we catch a bus which takes us up Val D'Anniviers towards Grimentz eventually pulling into Lac Moiry where we disembark and, of course, have coffee at a nice restaurant. Tres Bien. We start the climb much of which overlaps with the same route as the Raid Grand Cristalp marathon XC (that's the Euro code word for dirt-roadie stuff your spandex with shorts type boring race) course. Much of the climb is very scenic but is, in and of itself, pretty boring double track and road. The climb can be done in fpur hours at a slack taking pictures pace. A moderately fast pace would get one to Becs de Besson in three hours or so with day packs.  Since we were planning to stay overnight there we took our time waiting out some rain squalls and chilling in the alpine views. Some of us even passed out from oxygen deprivation hike-a-biking certain sections. 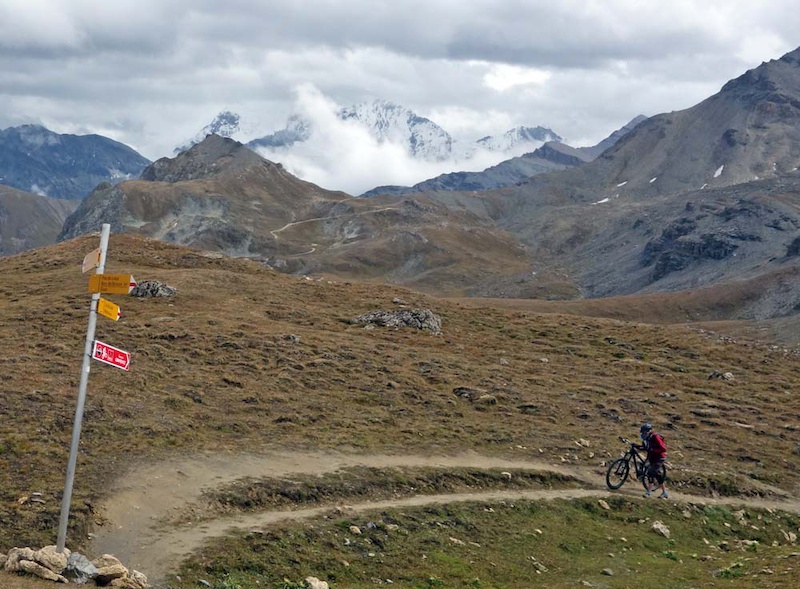 Bit of pushing. This is at 2600m. Then we are at the second pass (Pass Lona) at 2787m where the Grand Raid breaks off the track and descends 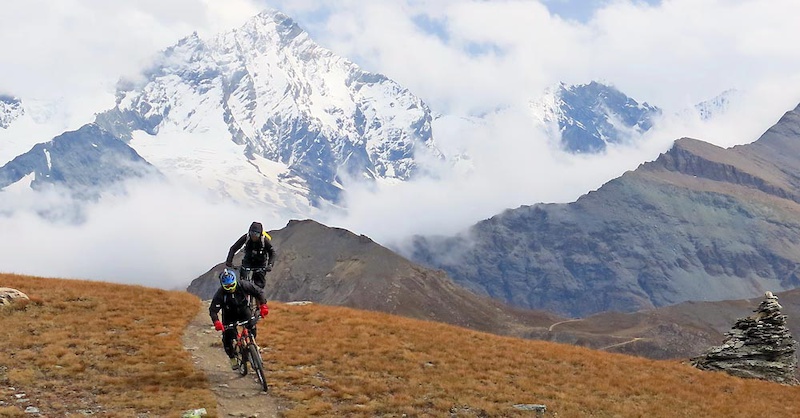 Amazing views surround; this of the Weisshorn back behind us in Val d'Anniviers wreathed in clouds. Singaporeans drop in to a small descent before starting the last push to the cabin. Photo by Martin Buetler 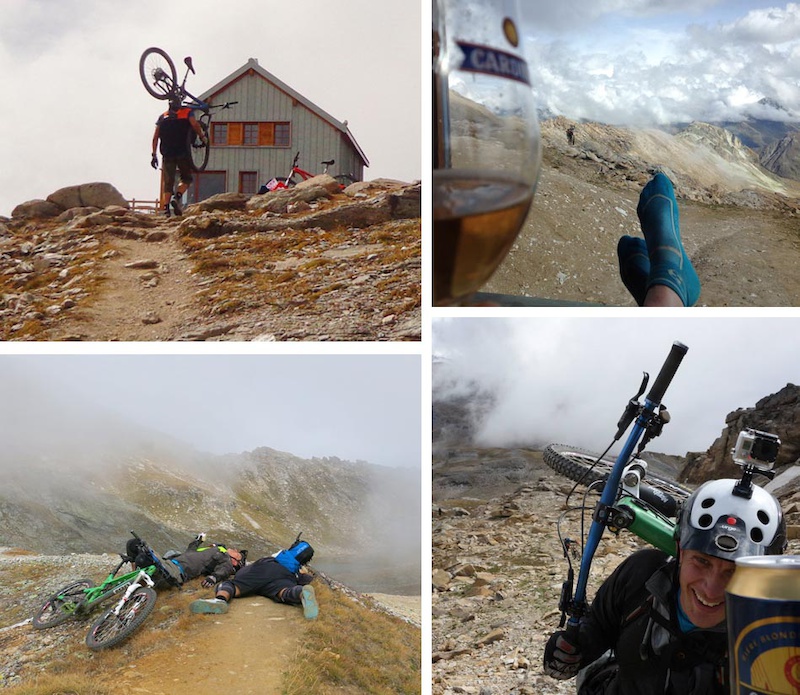 Mus and Shafudin's reaction when they saw they had to go down, before the last push up! Come on guys just a short 300m ramble straight up!

From Moiry our stats for today are 13.8km, 5hrs, 1000m Climbing, 260m Descending. We ascend to to 2985m finishing at the Cabin Becs De Bosson. This cabin has been in this spot for many years, but has been run by a new family since 2010. They have made it more welcoming to hikers and bikers by having sleeping areas for 62 people in dorms with duvets that sleep 4, 8, 10, 12 or 16 people. You can spend part of the day, evening or night. They will feed you, you can buy beer and hang out at a cool mountain hut. It seems Becs de Besson is most popular in the winter for ski touring since the terrain looks amazing from all sides! But there are no trees at this elevation so watch that weather if you want any sort of visibility. 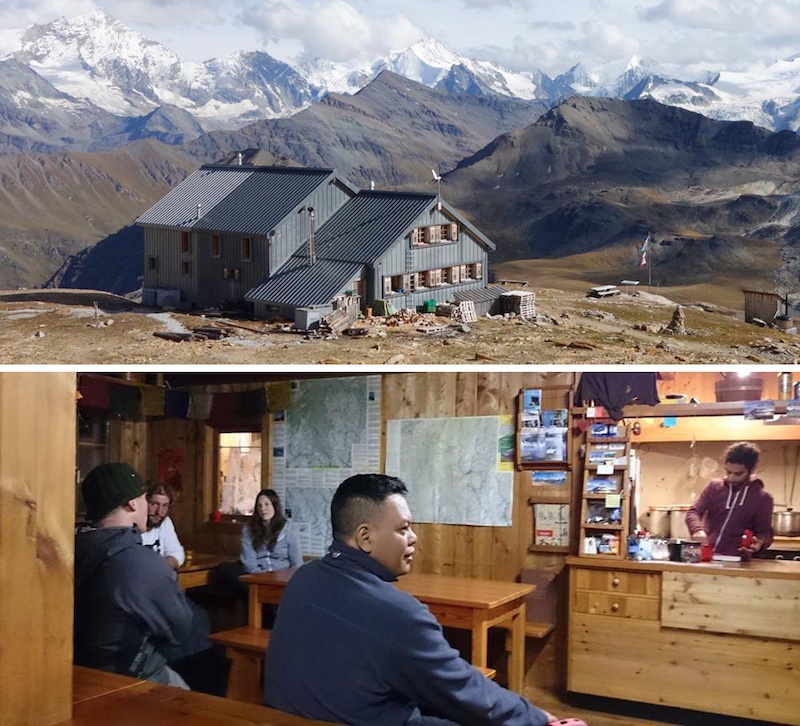 Cabin Becs de Bosson 2985m and what a view


The descent to Sion in the Val d'Herens

One of the draws of spending a night in the alpine are stars in every direction. The weather gods that were blessing us with great weather for the past few days are having a laugh though and the temperatures and visibility drop for the night. The Singaporeans who live at the equator are thoroughly unimpressed but thankfully we wake to a nice sunrise to the east but with rain in every other direction. Guess there is no rush. Sleeping in the cabin was very comfortable and this time of year, sunrise is your alarm. We chilled in the cabin, had some breakfast and waited for the clouds to break before venturing out.

Dressed in all our warm gear, at about the crack of 10am (man we are procrastinators) we figure it's time to drop down the Val d'Herens to the town of Sion in valley bottom. Herens is actually the name of a glacier that's now gone. It's retreat left a standard N-S oriented Valaisian valley surrounded by your standard 3 - 4000m majestic peaks and glaciers looking down on pastures filled with cows, goats and the odd farmer. Like its neighbouring valleys innumerable charming villages are at the valley bottom. Five ski resorts are located there but all are smaller than its Anniviers neighbour of St Luc-Chandolin which is why perhaps Val D'Herens is lesser known; although in my mind, just as beautiful.

Grey early skies made for a moody morning 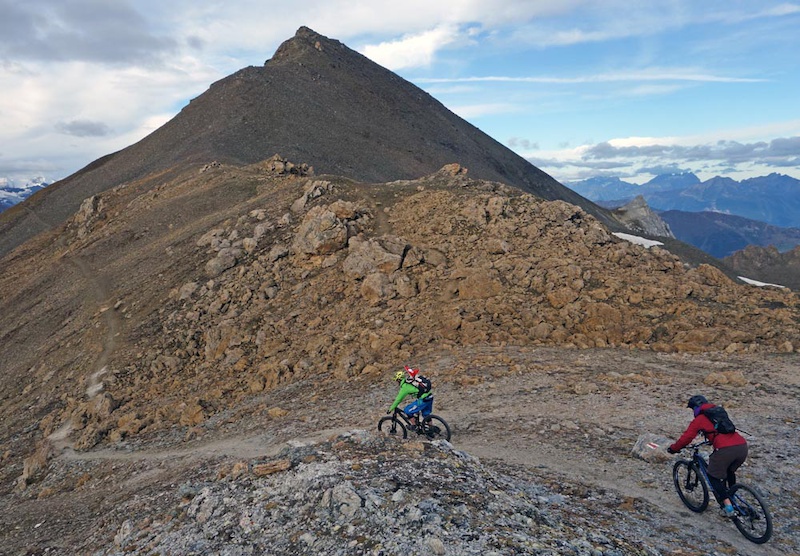 Off we go to traverse the ridge 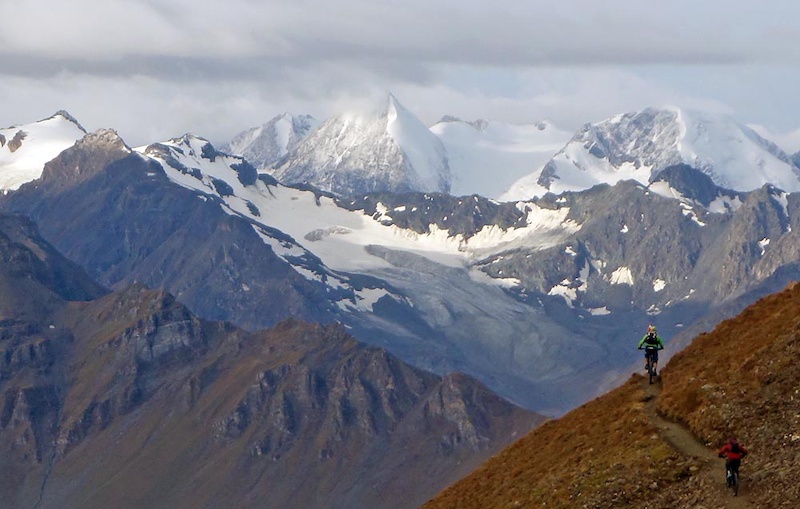 Alpine-trails.ch having a small moment in very big peaks. We continue across the high peaks 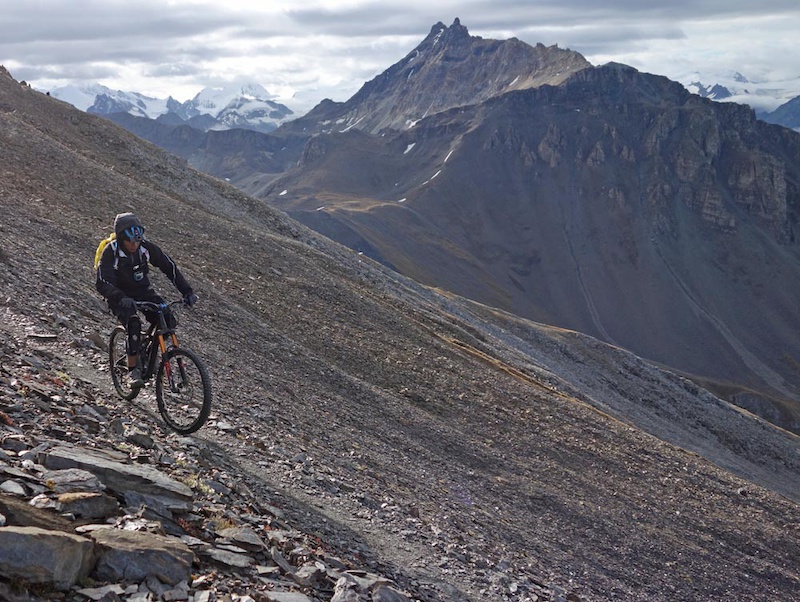 Not balking at the sharp rocks Mus rides 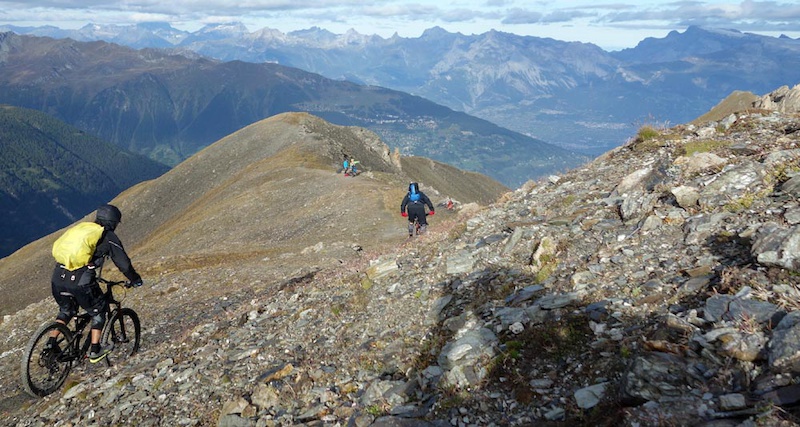 The ridge draws you on 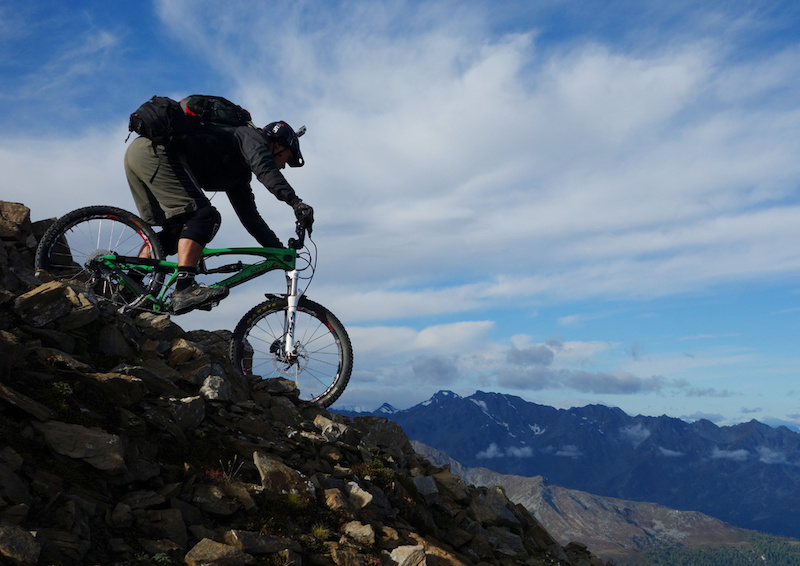 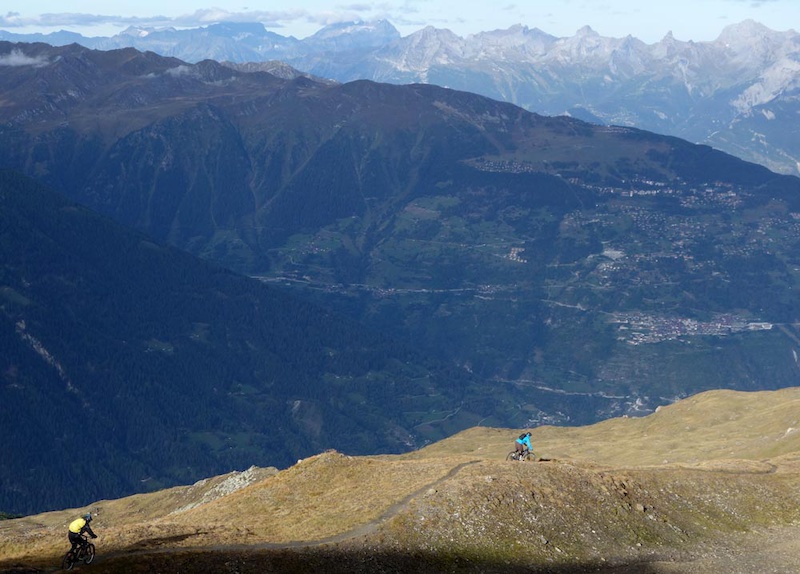 More alpine ridgeline than you can shake a stick at 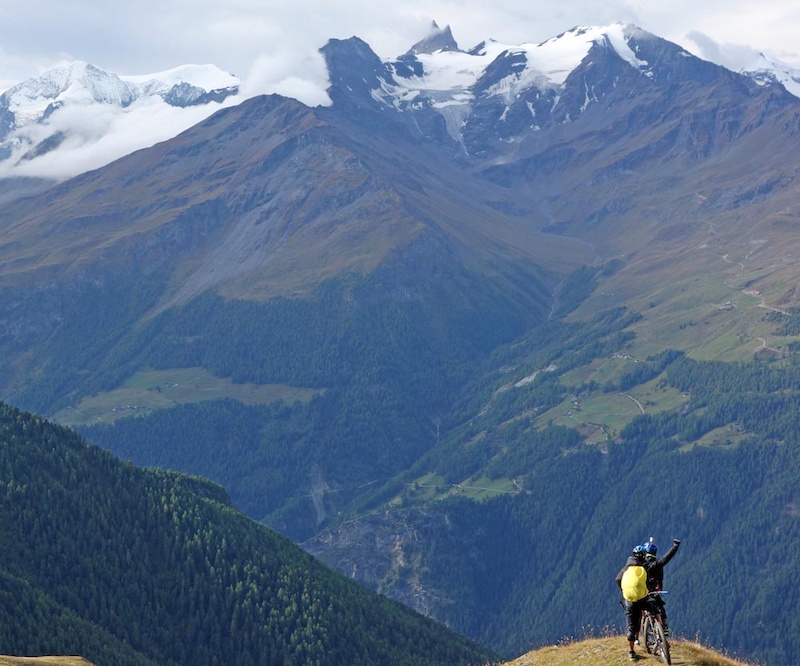 Another look at me and how small I am moment


The weather gods were with us on the descent and conditions improved the whole way down.  Picking our way down through singletrack from heaven descending through meandering alpine meadows and traversing ridgelines is the stuff of which dreams are made.  Looking back this still seems like an experience from another world - riding down through endless technical singletrack while surrounded by Swiss glaciers and ending with pretty decent treeline trails. The last bit of downhill eventually took us to valley bottom at 700m where we then had the rude awakening of climbing back another 300m to the main road to Sion. Another lunch at a charming Valais village at Vex ensued.  We then transferred via SBB train from Sion to Sierre where we took the funicular to our next stop at Crans Montana.  Our stats were 30km in 6:40, 340m Climbing, 2238m Descending (gotta like those stats). Another typische Schweiz day.

As a sidenote it actually snowed pretty heavily the next day so we did get lucky with the weather. We also lollygagged the climb and the descent. The two day trip could quite easily be compressed to one day over a six to eight hour day even with photo breaks. Of course that would chip greatly into chilling in the alpine flowers time so that's just food for thought. 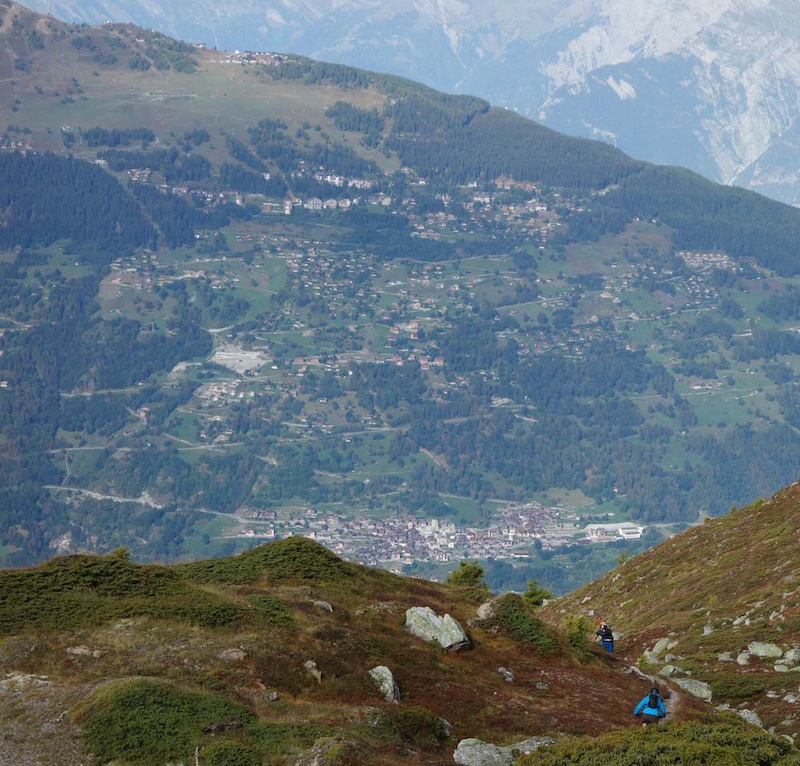 The trails twist to the towns 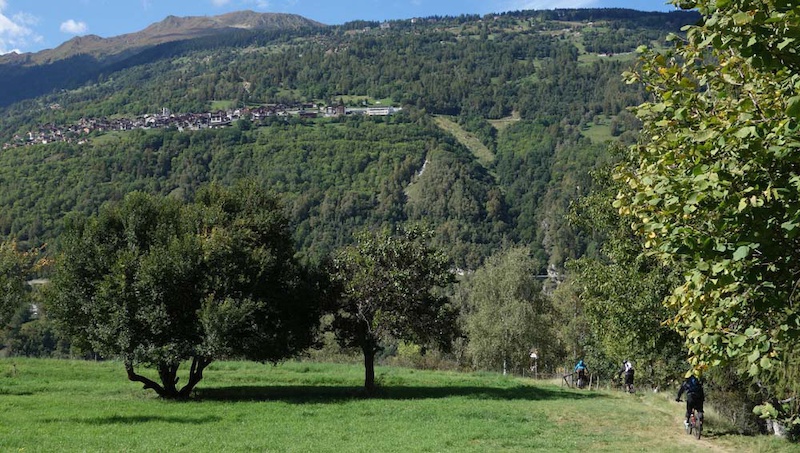 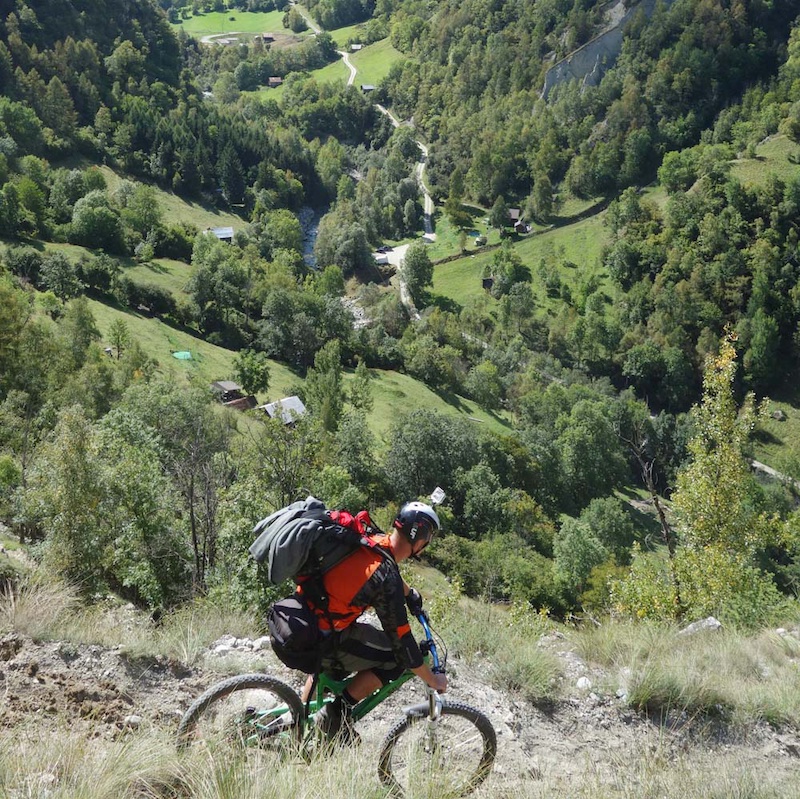 Alex through the rock and sand 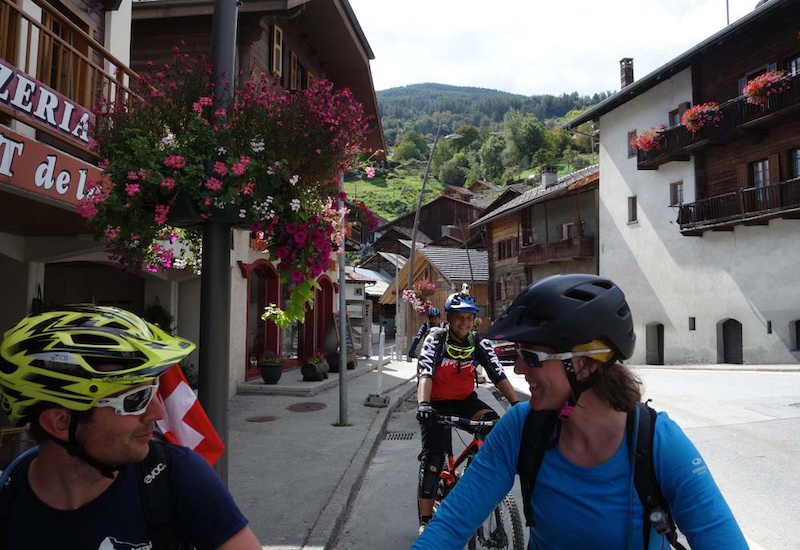 Back to the comfort of valley floor.

Keep a look out for the final part, coming next Sunday.
MENTIONS: @leelau @Alpine-Trails-Switzerland

piisku (Mar 22, 2015 at 1:14) (Below Threshold)
Switzerland is the land of mtb haters. Everything is forbidden. Swiss biketrails are mostly 2m wide roads which have nothing to do whit singletrails.

ATM the Swiss Franc coin is so high... it is too pricy to go there... But I have been there the past three years for riding the best trails I have seen so far...

BobChicken (Mar 22, 2015 at 4:47)
Hey! Annoying tourist question.... I work for a Swiss company, got two weeks of training in July, where would I spend my weekend riding a bike if I'm staying in Zurich? Don't want to waste most my weekend getting to and from, I know the trains are awesome, just need a recommendation for a quick trip.... ! Thanks!

santoman (Mar 22, 2015 at 5:21)
Hi there BobChicken, I live in Zurich and do quite some riding around here. What kind of riding are you looking for? I could recomend several "tours" with 1000-1500 meters of altitude gain followed by technical descents. You can PM me if you want more precise info (I also have the gps tracks for most of these rides)...BTW, I agree with bont, piisku is clueless regarding mtb riding in Switzerland, maybe he just got to ride in Appenzell?

manuesi (Mar 22, 2015 at 5:27)
what's quick?
if quick is less than 2 hours, go to the üetliberg in zürich: www.zueritrails.ch/infrastruktur/antennentrail but that is of course not alpine.
if you want to ride in the alps, you need to go to a southern canton, e.g. valais (zurich - visp: 2hrs by train) or grisons (zurich - chur: 1:15hrs by train). these are two good starting points, from where you can take the postautos mentioned above.
of course there are tons of trails in between 2hrs and daytrips, but real alpine tours are usually all day trips...

leelau (Mar 22, 2015 at 9:21)
Bob - see the link www.pinkbike.com/news/Switzerland-for-Dummies-part-1.html for more about the biking in Grisons/Graubunden

fssphotography (Mar 22, 2015 at 1:42)
thanks @leelau, we had a good time, ! My version of the report is here, journalists sharing the vibe. www.mtb-mag.com/en/alpine-trails-swiss-alps-bike-adventure

Most people are very nice to the bikers ...