Blake Steinecke started noticing vision loss during his junior year of high school. What started out a small concern quickly became a massive challenge. Despite becoming legally blind from a condition called LHON, he refused to let this prohibit him in any way. Blake has attained great success since his vision loss graduating college at the top of his class, playing for the U.S. Blind Hockey Team and starting his own brand, Adapting Sight, to do digital accessibility consulting and share video content on accessibility and his creativity with cameras, all by the age of 23. Blakes greatest trait of all though is his normalcy. You would never know what he's been through unless you asked. He does not let something that is out of his control define him which is very rare. Blake doesn't see himself as much different from the rest. He just loves to ride his bike and works hard to do so. I've known Blake for a few years now and always thought it would cool to share his story. This is the longest off the record video i've made but I still only scratched the surface of Blake and his story. 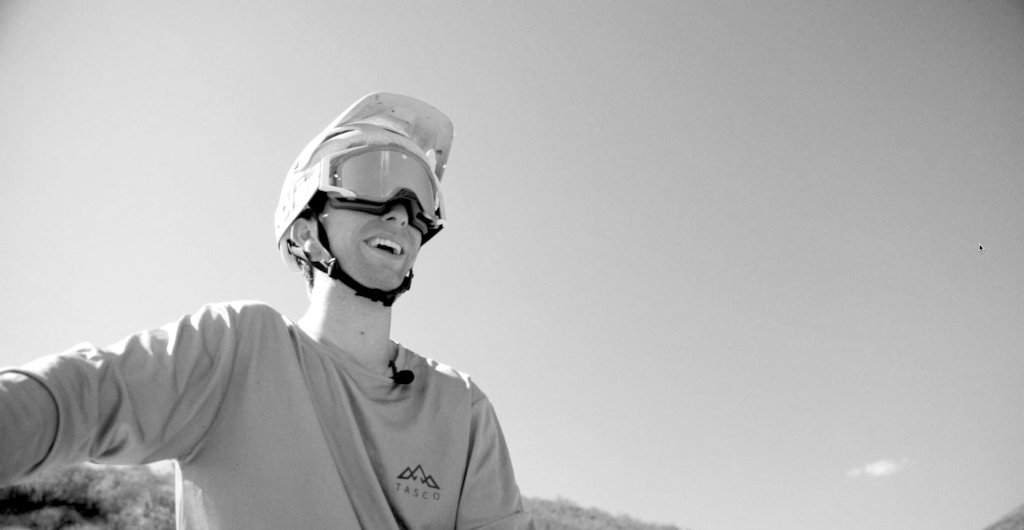 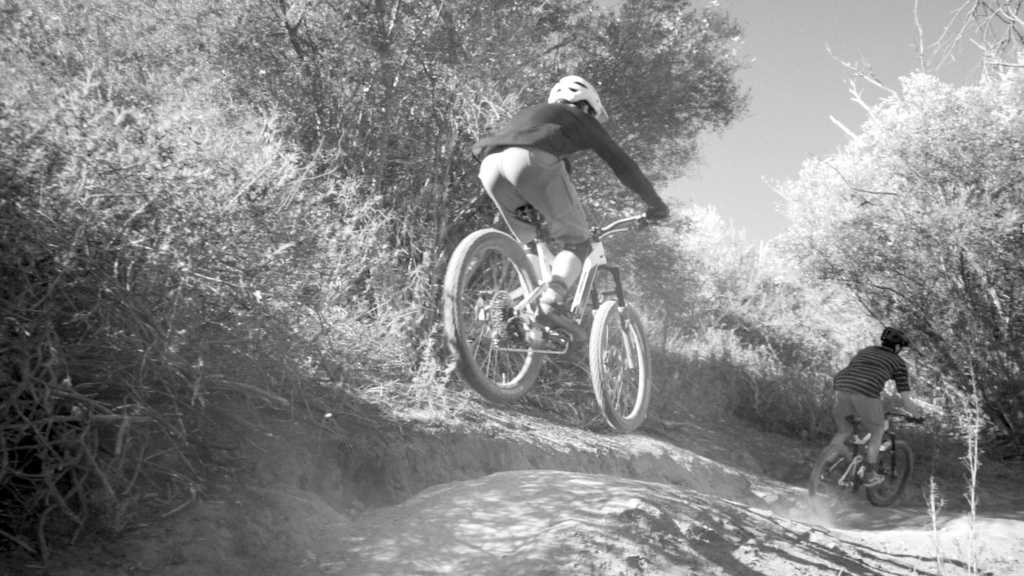 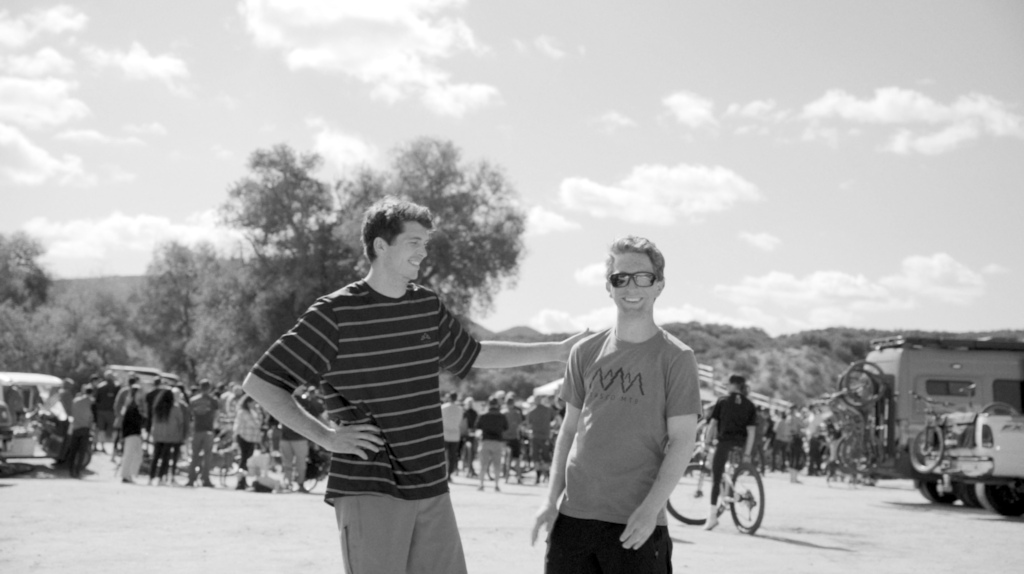 Off the Record is a miniseries designed to show personalities within the sport of mountain biking in an unfiltered and unscripted manor. MTB content tends to just show sick riding but there is much more to the sport than that alone. These videos are an attempt to share real stories that can resonate with anyone watching and share my view of what the sport is all about.

mihauek (May 6, 2022 at 0:10)
He could've chosen Road Bikes, track cycling or whatever but he chose Enduro. That's the spirit boy!

Blake-Steinecke (May 6, 2022 at 10:39)
Totally, I find enduro much more exciting! Plus riding inthe road I feel is more dangerous with all the cars.

IamDave (May 6, 2022 at 3:36)
In the modern world of MTB websites and Youtube we are continuously bombarded with footage of the best riders in the world throwing themselves of this or that 50ft drop. But this guy, and all the other riders we've seen on here with impairments, are truly the definition of radness. When i next fail to ride something gnarly i'll have to look even harder for excuses, because I don't really think i can blame my bike's 7 year old geometry after seeing this.

Blake-Steinecke (May 6, 2022 at 10:42)
Thanks, really appreciate that feedback! Liam, who made this video, is doing a great job in the mountain bike video space to help share more stories and not just crazy riding feats. Great attitude. I was not riding it in this video since the wheel was broken, but my regular bike is a 2015 Specialized Enduro so I guess I got the seven year old geometry going as well hahaha!

fristafrista (May 6, 2022 at 4:44)
While I was watching this video, 1000 thoughts were spinning in my head, starting with 10-year-olds sons of wealthy fathers who bring their 10k bikes to have their forks overhauled once a month because in the bike park on their blue line they do not find the " feeling "or amateurs of any age who complain because the trails are too rocky, they are too muddy, they are too steep, etc. etc. who see very well and do not know how to HAVE FUN riding their bike even simply by taking part in a race close to them ..then comes this guy, Blake and his brother, my new idols for 5 minutes, who in order to fall 15 times in a technical passage HAVE FUN in a simple way challenging themselves (Blake does not see and has the hardest part, but even the brother who acts as a navigator has a big job). I hope millions see this video, all my esteem and admiration !! Cheers from Italy!

Blake-Steinecke (May 6, 2022 at 10:44)
Thanks, appreciate the feedback and yes it is good to always have gratitude rather than getting frustrated by what we don't have. Very thankful for my friend Eric for helping me do all of this!

karl-huckingbikes (May 6, 2022 at 1:01)
Love this why should we as humans treat anyone any diffrent i hope someone will read this to him but we including me are proud to have you as part of the biking world well done keep up the good work mate

Blake-Steinecke (May 6, 2022 at 10:45)
Appreciate it! Thanks to technology I can read this and write back. Thankful for the mountain bike community!

karl-huckingbikes (May 6, 2022 at 10:52)
Well im so glad you replyed thanks mate you getvmax respect from me with skills like that mate @Blake-Steinecke:

ne-spoked-b (May 6, 2022 at 5:41)
Unreal ! Great story about Blake and Eric. Can't imagine how difficult this must have been for his friend Eric as well. Knowing your buddies eye sight challenges, the danger of the situation mixed with wanting to get him out there. This video I'll make my kids watch.

sorrymissjackson (May 6, 2022 at 5:34)
Kudos to Blake, very inspiring! But also a ton of props to his mate. Being willing to go slower than you would and sometimes should takes a lot of determination too. Great team!

salespunk (May 6, 2022 at 8:36)
Blake is just an amazing human being. Have spent some time with him at Tasco and he is always positive and just fun to talk with. Puts most of people's day to day issues into perspective on how minor most things really are.

funkysalup (May 6, 2022 at 6:57)
That was amazing. Thanks for sharing this awesome, inspirational dude with the community. And Eric, man! What a great friend. We should all be so lucky, but glad he and Blake are out there doing things on bikes. So great.

Blake-Steinecke (May 6, 2022 at 10:51)
Thanks! We are all very fortunate to be able to enjoy the great sport of mountain biking!

ottospitz (May 6, 2022 at 8:57)
This made my day! He´s lucky to have such an awesome friend, so epic that he rides even though he´s legally blind

Blake-Steinecke (May 6, 2022 at 10:52)
I just try to follow what Eric tells me about the trail and I stay right behind him. Rarely do I have have to guess, I just have to trust my bike and also what Eric tells me.

Royk50 (May 6, 2022 at 2:48)
Some simulation of sorts of what he actually sees would be informative. Respects for miles man!

Blake-Steinecke (May 6, 2022 at 10:54)
We thought about doing that for the video but I feel as though vision is very subjective and incredibly hard to replicate with video. I have central vision loss due to a condition called LHON which caused the central fibers of my optic nerve to deterioriate but I still have some peripheral vision. My acuity is 20/800. Hopefully that helps clarify some things and gives yo info if you wanted to look up more to try to get a better understanding.

VictorBrousseaud (May 6, 2022 at 5:56)
So much respect for him ! So inspiring to motivate everybody and forget about reasons not to ride

Blake-Steinecke (May 6, 2022 at 10:55)
Thank you! Just gotta get out there and be grateful for being a part of the great sport of mountain biking!

I guess now, I don't have any excuses for when I can't make it down some techy trails.

Blake-Steinecke (May 6, 2022 at 10:56)
Hahaha, glad this gives a good perspective for you, just trust your bike and know your limits!

Blindbobby (May 6, 2022 at 13:44)
Well done Blake! Changing perceptions and expectations of what people are capable of Your sttitude and ability to articulate the hows, why's,along with your appreciation for your guide are top shelf (we couldn't do it without them)! Best of luck in all things and know you are good for the sport we all love. Be well, stay rad and smile so much you get sunburned teeth as you continue to show that the bike is for everybody.
Rideblindracing.com

Blake-Steinecke (May 10, 2022 at 10:18)
Thank you so much Bobby, that means a ton coming from you! When my vision loss first started about six years ago I watched your documentary with my family and it was a huge inspiration to show me that I could continue to ride but just had to do it in a new way. Let's connect soon, would be great to have a conversation.

pedalfitruss (May 7, 2022 at 17:43)
Wow, that was cool! I can just imagine how much more Blake feels the trail than most of us. Something I try to teach as a skills coach, but can't ever be truly appreciated until that's one of the main things you are relying on. Stoked you're still a passionate rider with a smile...Fun to watch!

Blake-Steinecke (May 10, 2022 at 10:20)
Thanks! Yes it has definitely grown my bike control skills and enhanced my relationship with trusting my bike. People think its all about your eyes and seeing the trail, but your hands and feet are the ones connected to the bike that you have constantly be working with and I also like to tell people that your best suspension is in your elbows and knees!

jibbandpedal (May 6, 2022 at 6:56)
Kudas to Blake for not padding up like the Michelin Man to do this. Serious jank he is riding through.

Blake-Steinecke (May 6, 2022 at 11:00)
Hahaha! These days I wear G Form elbow and knee pads, and Pathfinder TASCO gloves that have a little more padding on the knuckles. Shockingly it took me awhile to start wearing pads after my vision loss.

There is nothing better to share thé riding passion no matter what
Jeep shredding !