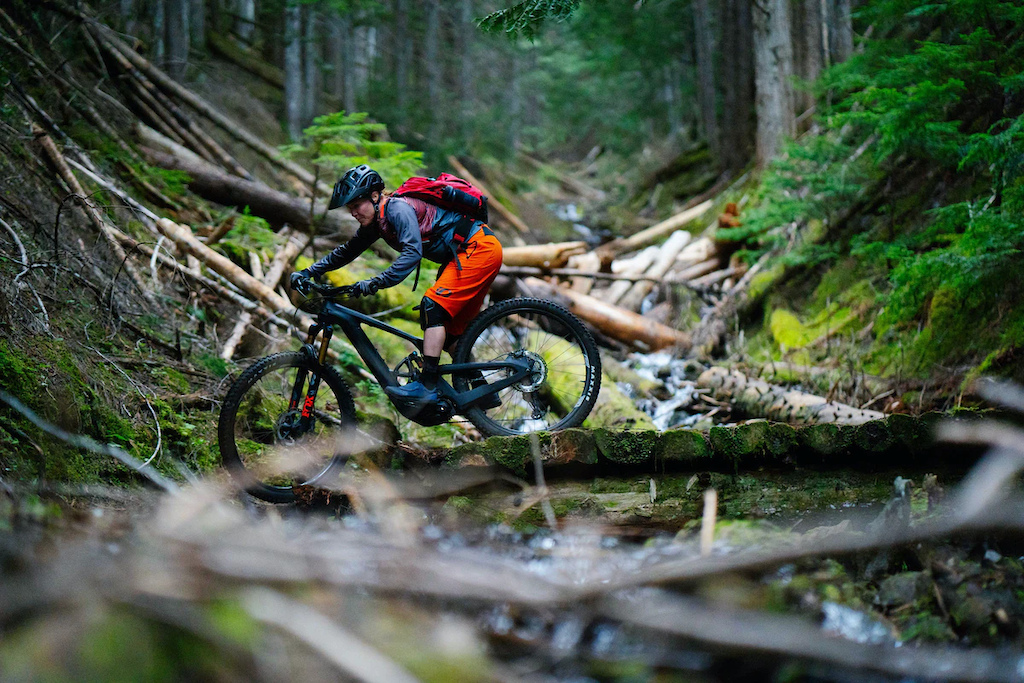 Shimano MTB's Instagram page posted a photo series of what is undeniably an unreleased eMTB from Evil Bikes. A bike check was published in Shimano's 'Further' magazine reveals that the frame boasts 166mm of rear wheel travel using Evil's Delta System suspension design, like the rest of their bikes, and uses a 170mm fork. Shimano's EP8 motor runs off of a 630 Wh battery and stats are visible from the SC-EM800-display. 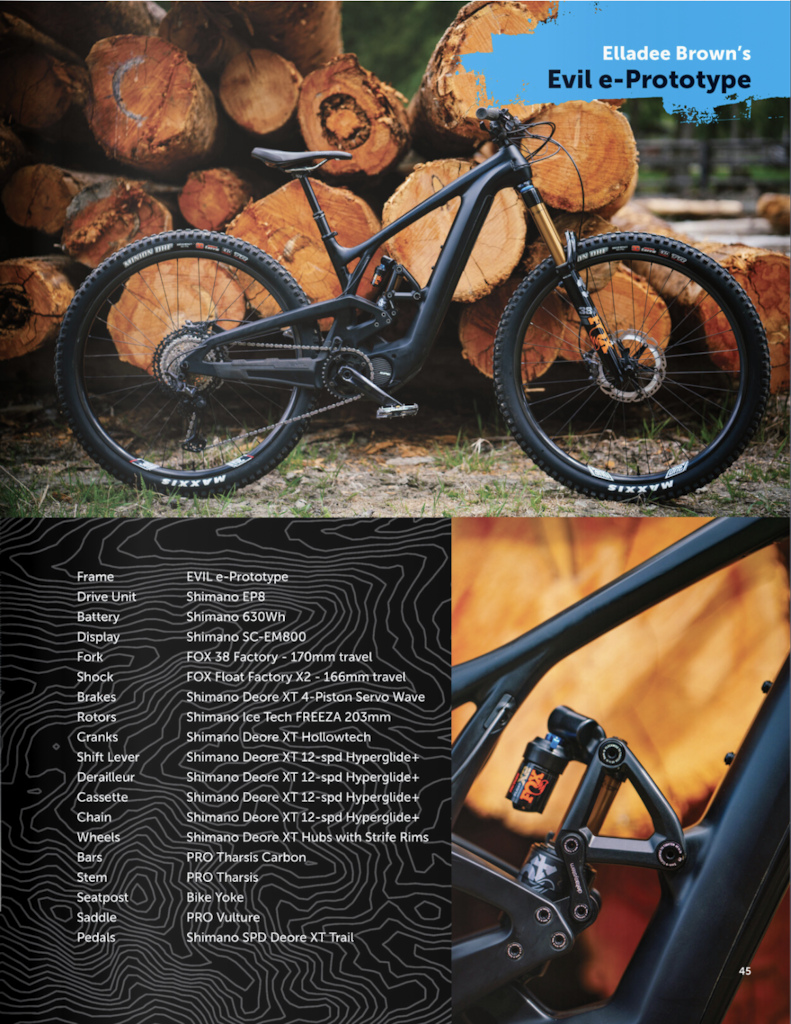 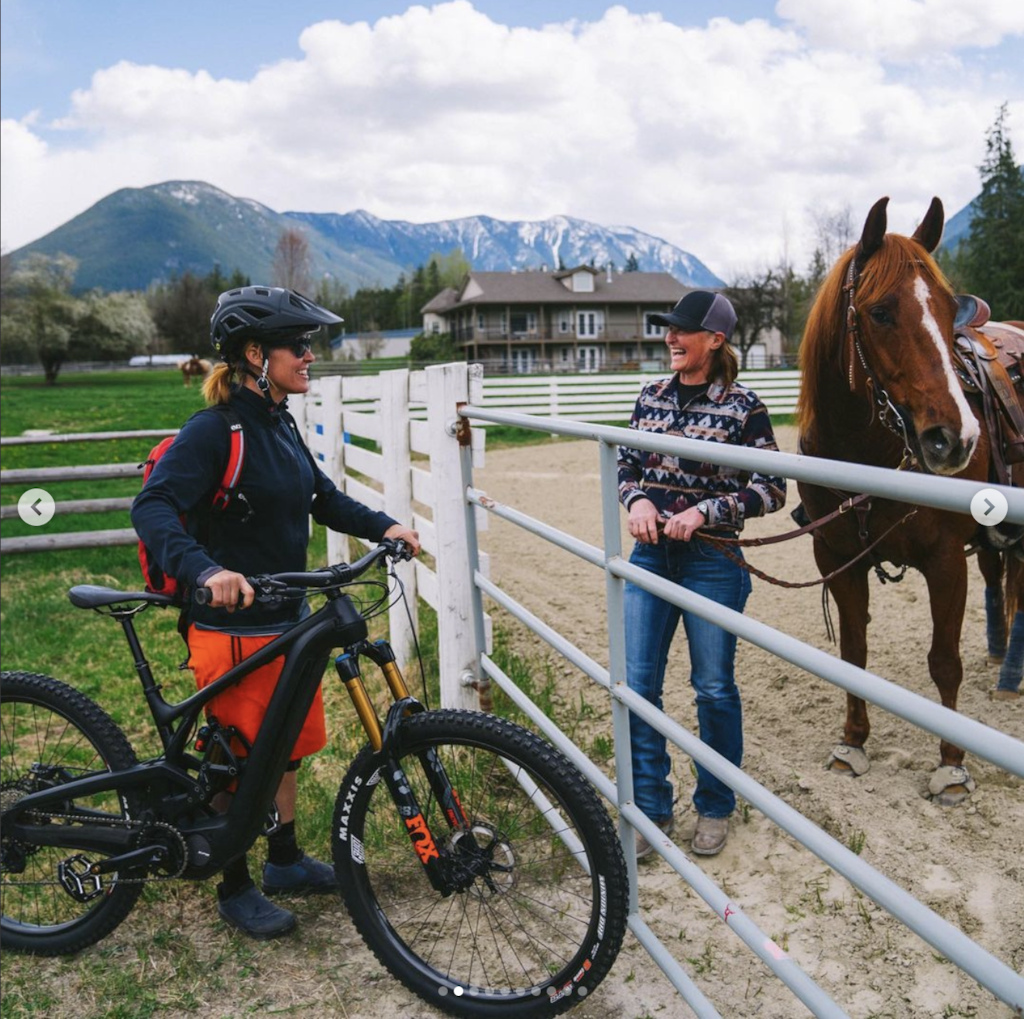 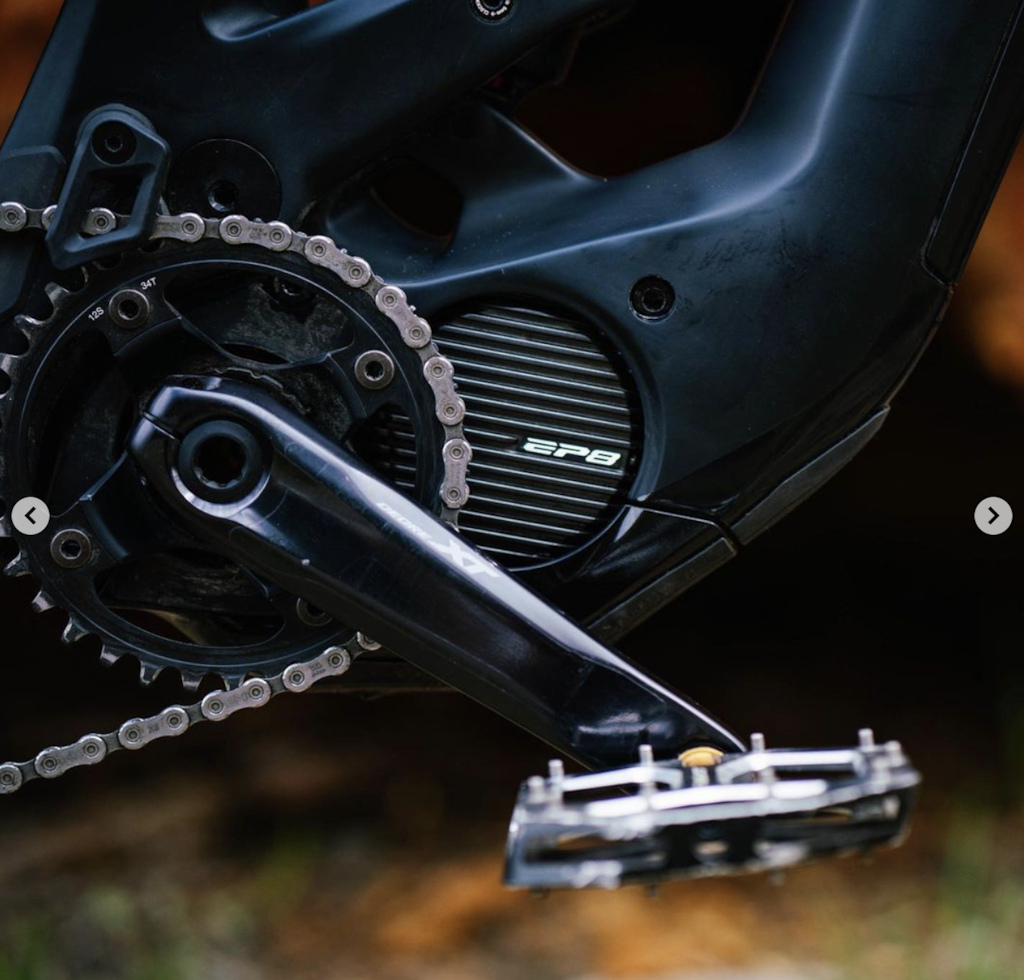 The carbon bike looks like it has been built up with dual 29" wheels, but that doesn't rule out mixed wheel possibilities. There's also plenty of room in the front triangle for a water bottle too.

The full story where these photos first appeared can be found here in Shimano's Further magazine that is available online and promotes adventures and advocacy trail with e-MTBs. Titled Homecoming Horsepower, the words play on the e-MTB riding experience, written by Shimano ambassador Elladee Brown about rediscovering trails in the Selkirk region of Southeastern B.C. where she grew up.

We've reached out to Evil Bikes for further information about a new bike, but no, there won't be a review coming tomorrow. 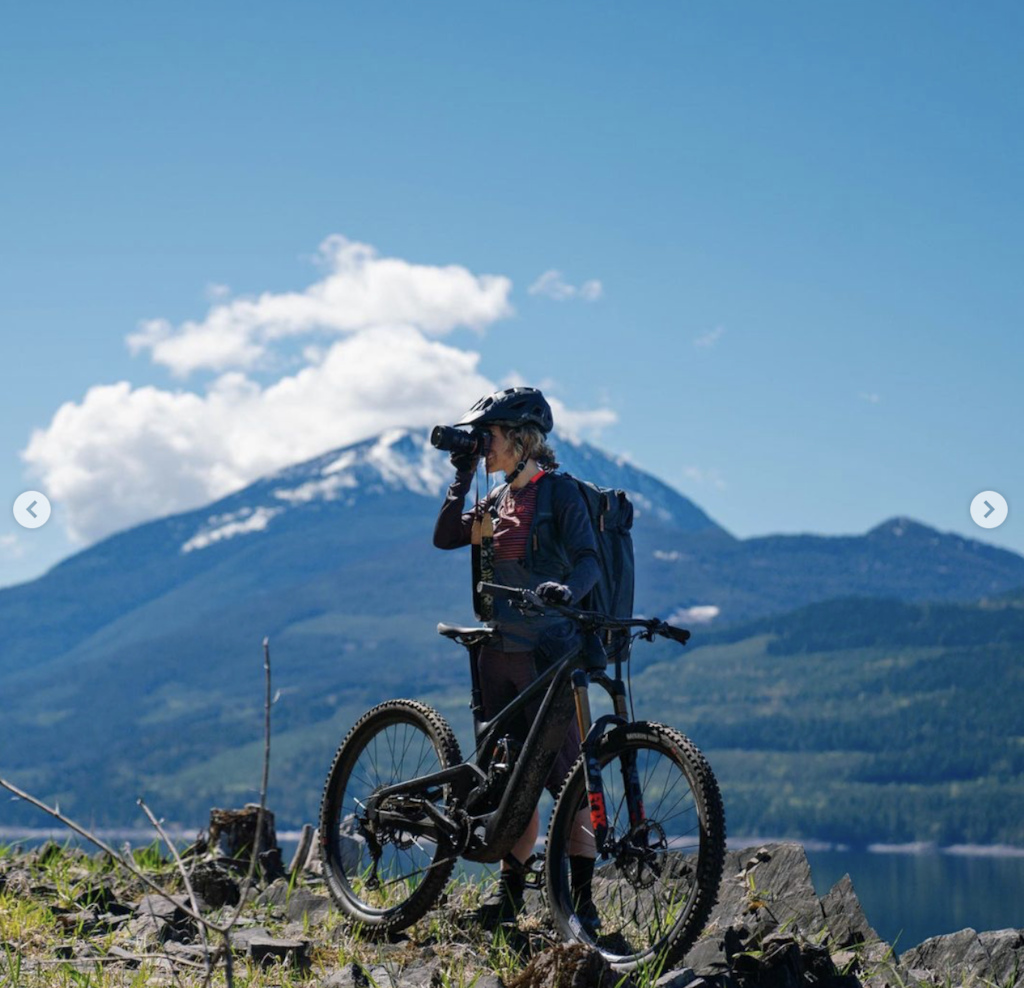 bat-fastard (Nov 18, 2021 at 12:18)
@mattg95: Almost, gorilla tape lol. Doesn't move, it almost fitted in frame triangle, next step is a custom printed case and redo cells into it. Still a work in progress but the kit is unreal.

read that in darth vaders voice

owl-X (Nov 18, 2021 at 16:49)
@Tomevans89:
Look at all these rumors surrounding me every day
I just need some time, some time to get away
From all these rumors, I can't take it no more
My best friend said there's one out now about me and the girl next door

*well thought out and presented advertisement

antrunner (Nov 19, 2021 at 11:25)
We've had these advertisements up since sea otter at the shop I work at. I'm surprised no one posted this before now.

nskerb (Nov 18, 2021 at 11:24)
Evil needs to be sanctioned by the Geneva Convention for producing something that ugly.

Tsoxbhk (Nov 18, 2021 at 11:49)
Finished carbon bikes like this are not prototypes. Maybe first articles or sample but this is not a prototype!

RefreshGarageRich (Nov 18, 2021 at 13:54)
Both eeb and horse rider are obviously sharing a good laugh about all the other trail users hating them.

zachsith (Nov 18, 2021 at 17:49)
I distinctly remember a conversation between Troy Lee and Kevin Walsh, 5 or 6 years ago, in which Troy asked when Evil would release an E-bike into the game. True to form, the response was nothing short of E-bike condemnation. Fast forward and it was inevitable. Personally I think Delta would be an awesome platform for a heavy machine.. the DW link E-bikes are a cut above in my humble opinion.. midstroke support over everything at with that kind of mass under yee

kylar (Nov 18, 2021 at 19:06)
This is the one I’m waiting for! With removable batteries so I can keep spares at the bottom and switch them out after a few runs.

dsut4392 (Nov 18, 2021 at 14:49)
Not enough linkages on this thing for me. Needs to swap out the single-pivot rear triangle with a DW6 link design to control both wheel path and shock leverage curve. And drive both ends of the shock with a linkage. They could mount the shock further up in the frame too, there's a couple of inches of wasted space in there.

krau (Nov 20, 2021 at 8:51)
I currently ride a Transition and I take pride in the fact that they as a company (so far) have seemed pretty anti-ebike in their cheeky marketing and what not. I’m building up an Offering as my next bike and its a bummer I can’t say the same about Evil :/ I appreciate ebikes for what they can do but its a bummer to see another brand hop on this “bandwagon” basically.

For once I believe you.

vinay (Nov 19, 2021 at 5:32)
@fracasnoxteam: Waaaaaaahhhhhhhh, me doesn't care one bit about pedal assist but does love the comment section going mad. Waaaaahhhhhhh!

blackfly (Nov 19, 2021 at 8:56)
Elladee is a pro racer and needs an ebike? Rocky does the same thing getting Wade to shill ebikes even though he is likely the last person to need one. Just another pathetic attempt to legitimize ebikes that for any real rider doesn't need to exist.

mikeinhoodriver (Nov 19, 2021 at 10:49)
How about we stop focusing on e-bikes and start focusing on making lighter bikes... that would be a novel idea.

GnarsellusWallace (Nov 19, 2021 at 7:33)
Why don’t they just put the motor in that hideous oversized headtube?!?
Below threshold threads are hidden

Nottman (Nov 18, 2021 at 13:39)
Wow an another e-motor bike to go up and down trails multiple times and not do any trail work I guess if I had that much money to spend on a bike i would feel like i was privileged enough not to do trail day. I have never seen an e biker do trail work Oh ya I guess you need two jobs to buy the bike and have no time to do trail work on the trails you erode faster than a peddle bike.

Dustfarter (Nov 19, 2021 at 0:31)
Oh please. People who dig dig and people who don't dig don't dig. I dig because I love it and enjoy seeing people stoked on my builds. My e-bike sees more dig days than any other bike because I can get there faster and dig longer.

TrailFeatures (Nov 22, 2021 at 8:39)
@Dustfarter: Most fulltime trail builders love ebikes for this very reason. Carry more and go farther when there are no fire roads.

But hey... Why let that get in the way of a tired argument that people learned to recite from internet trolls?
Post a Comment