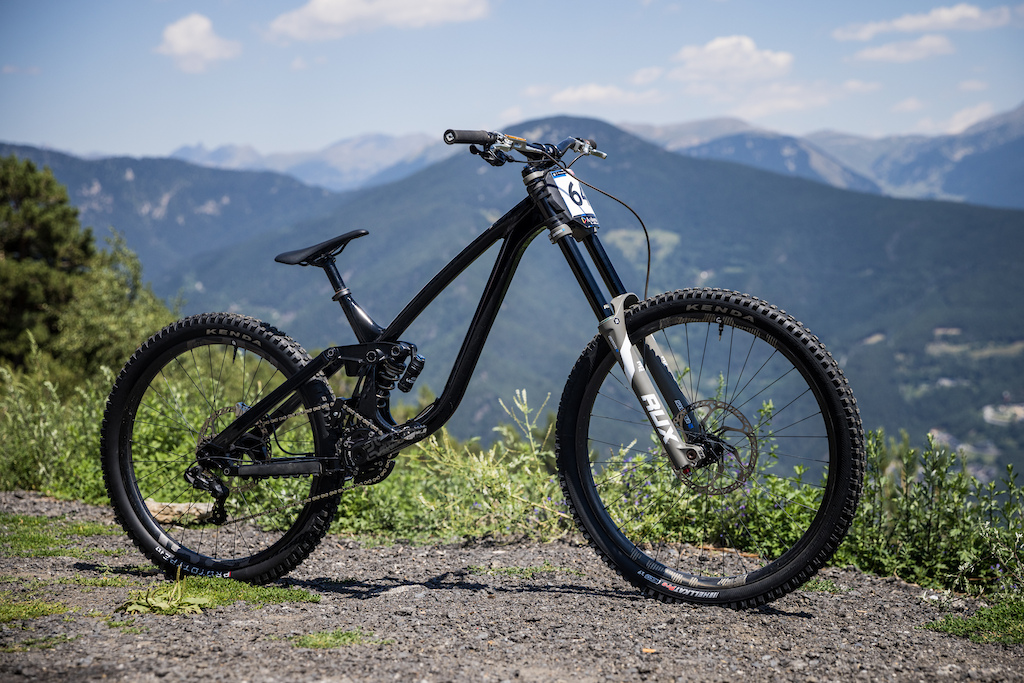 Halfway through the World Cup season marks a tipping point where teams start to pull out all the stops to play catch up or stay on top. The NS Bikes UR Team has brought along their new secret weapon: a prototype Fuzz with a six-bar suspension design, similar to what Commencal is using on their Supreme V5. NS Bikes is calling this linkage system a "floating high pivot design" and it provides 203mm of travel and is built around a dedicated mixed wheel setup. Team members Kye A'Hearn and George Brannigan will be unleashing the bike on the blazingly fast Andorra World Cup track this weekend since they feel it's a beneficial place to test the bike to its full capacity.

The prototype bike appears similar to their current Fuzz, in its stealthy black veil, until you take a closer look and what's going on behind the seat tube. Deviating from their classic four-bar suspension system, they've added a short link between the main triangle and the chainstay, while keeping the pivot near the rear axle. A bridge connects from that short link near the bottom bracket to the middle pivot of the upper rocker arm. Interrupting the upper chainline between the cassette and the front ring is an idler that hangs from that rate controlling bridge. On that bridge, there are slots to move the idler vertically to tune the influence of the chain on the suspension. You might also notice that they are still opting to use the O-Chain device to reduce the pedal kickback, a component that is now widely used in both downhill and enduro racing. 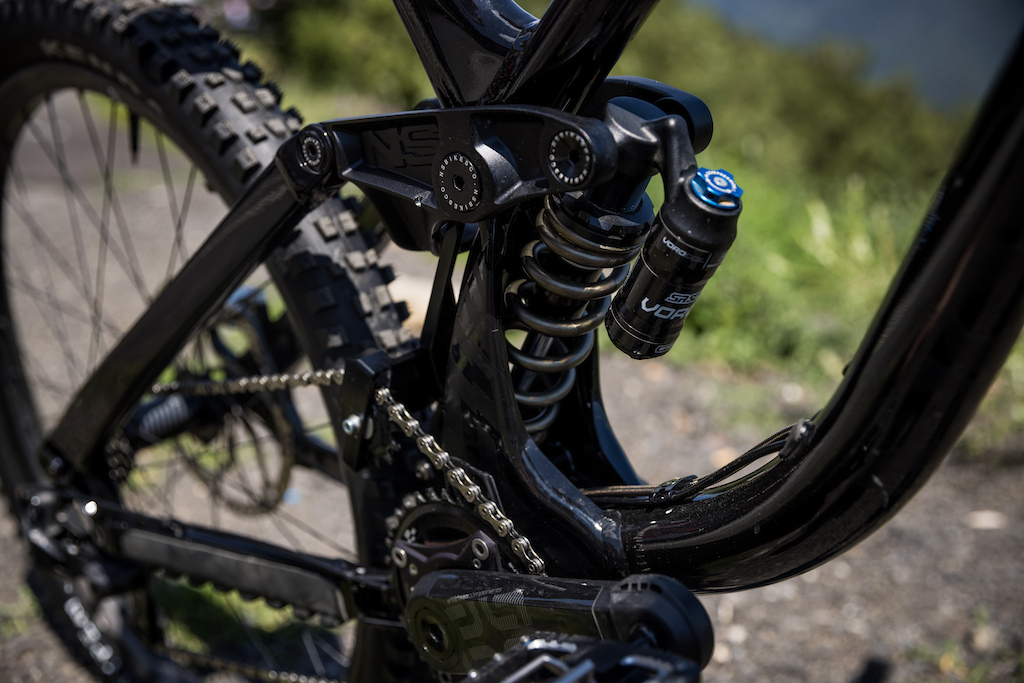 An idler goes hand in hand with any high pivot bike to control the amount of chain growth. 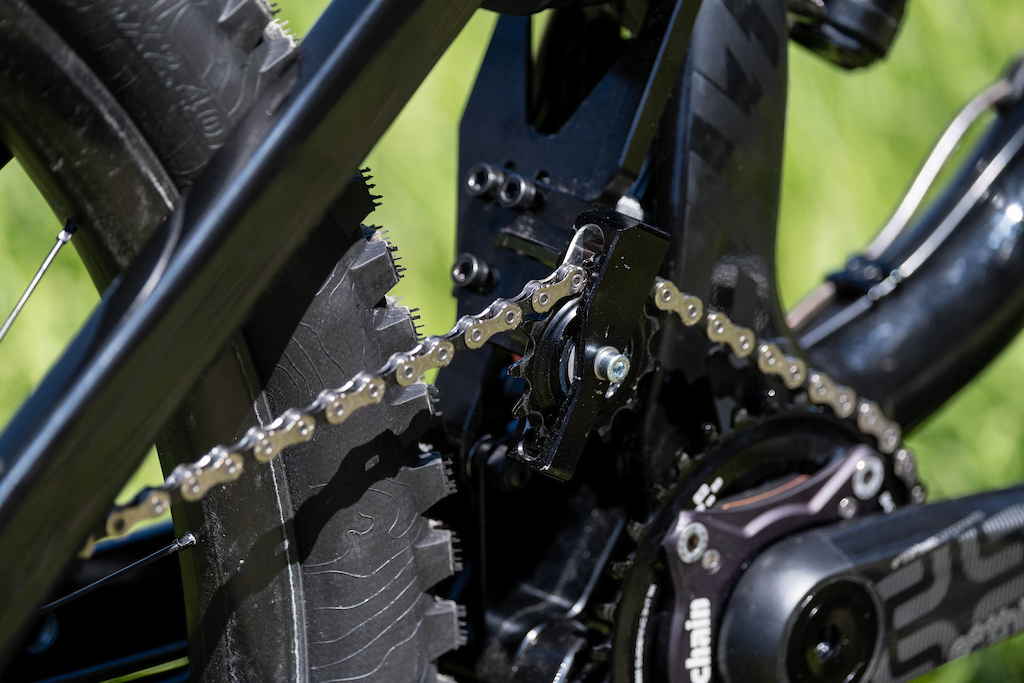 The angle of the dangle. 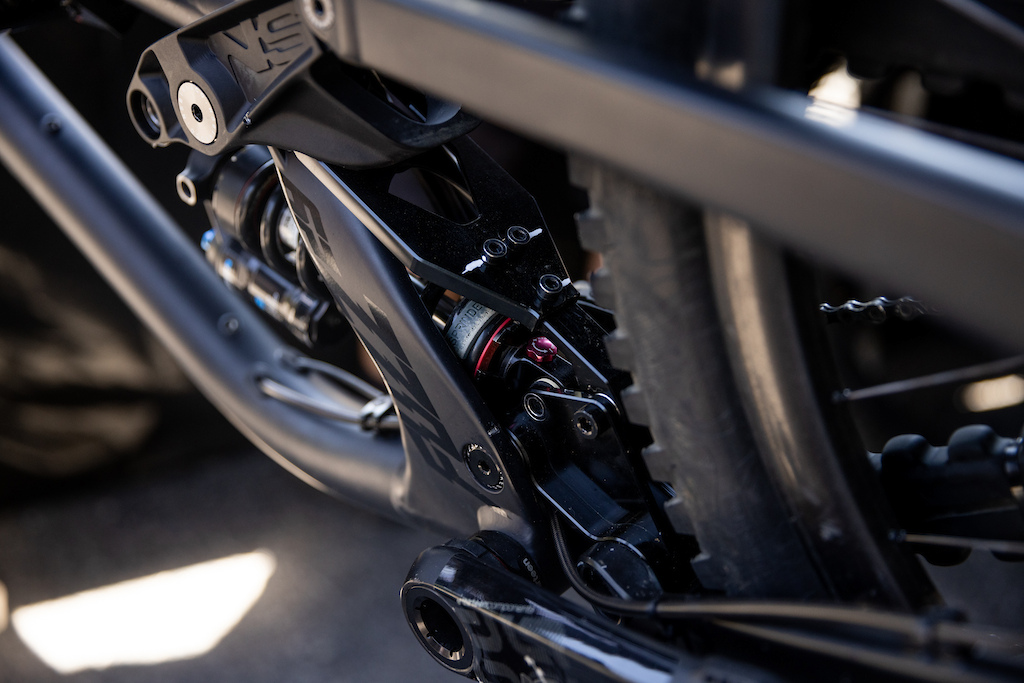 A better look at that rate controlling bridge that connects the two links. 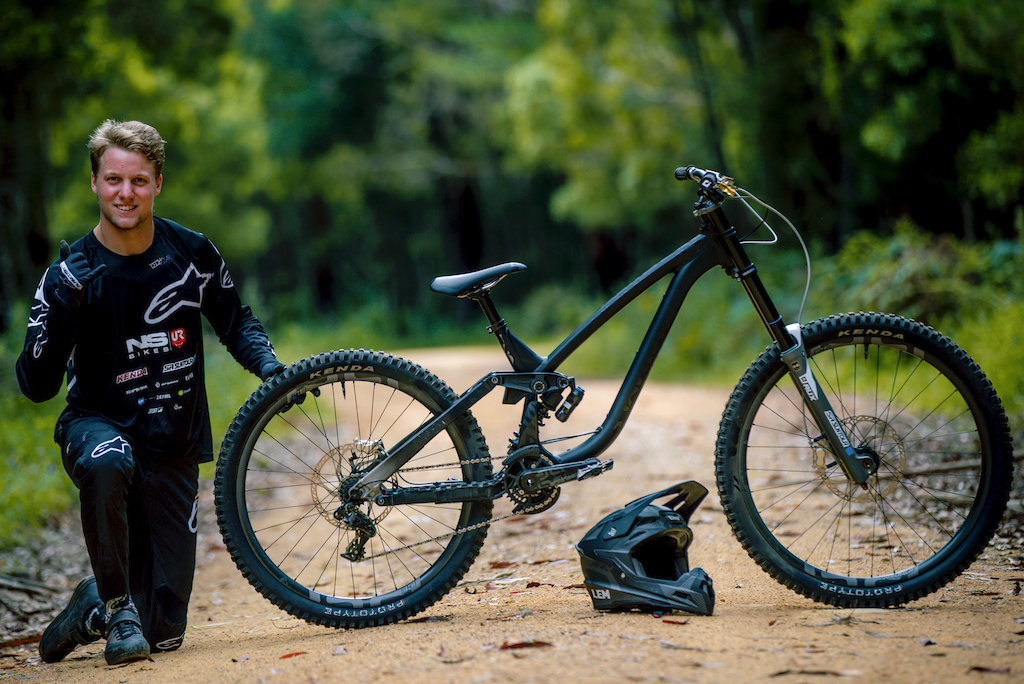 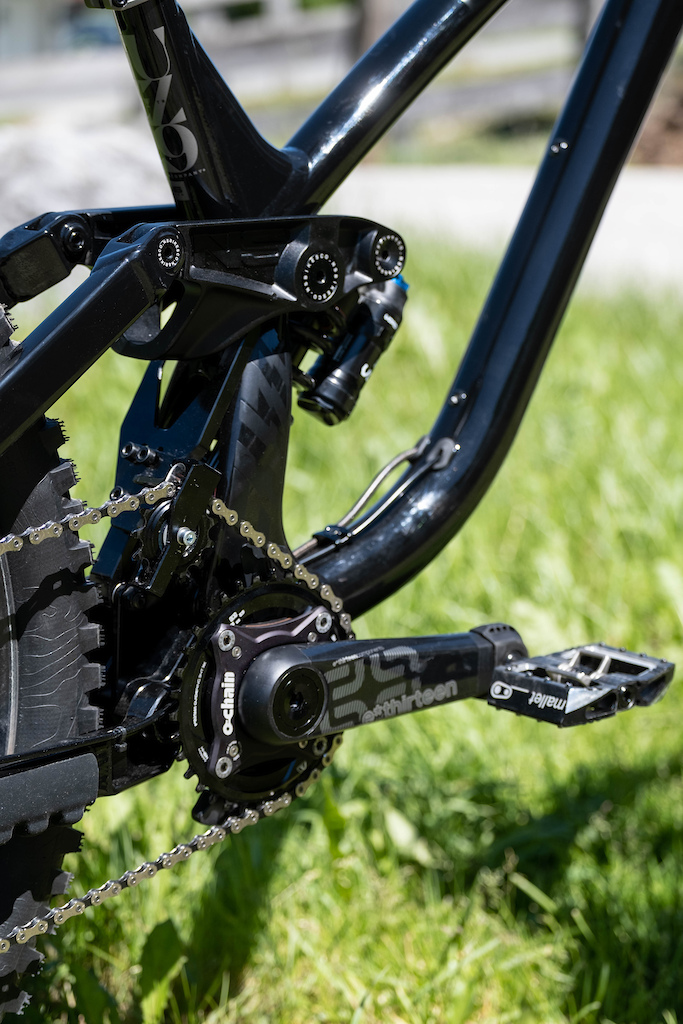 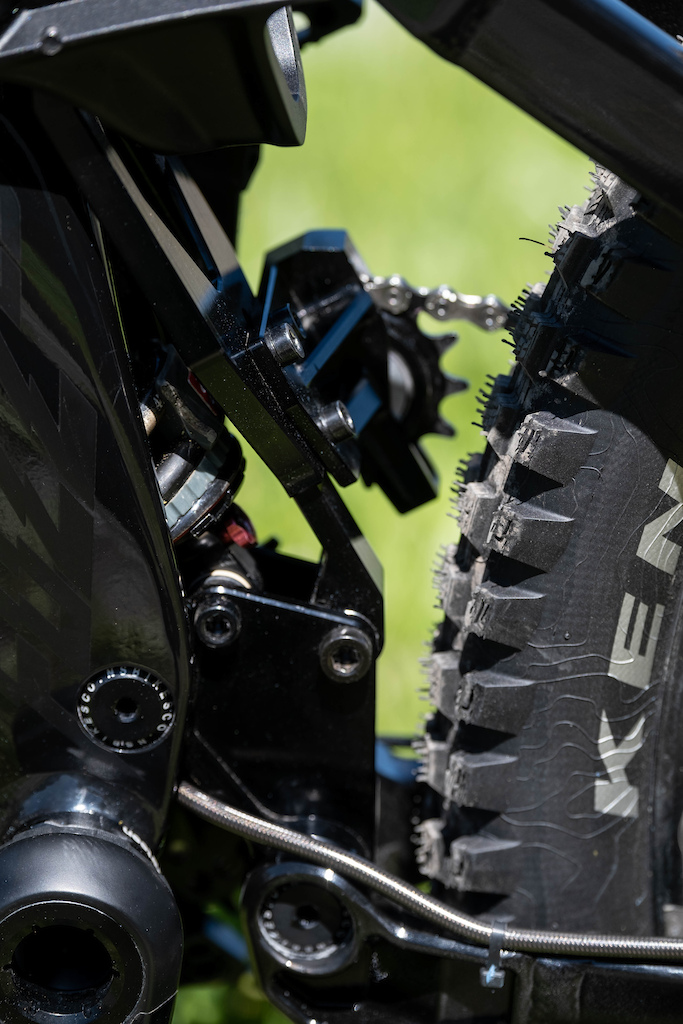 its like the ones they used to ride in the olden days......even some of the cables are on the outside!

duncanstrohnd (Jul 14, 2022 at 13:52)
They added a few more bar widths on the bike, so when you hit a tight section, you just move your hands to a narrower bar. Smart.

SeanC1 (Jul 14, 2022 at 22:37)
you can actually order them from the Suntour USA website. Some of them are very good and also easy to work on and maintain.

Linc (Jul 14, 2022 at 17:12)
Nice to see something new from NS. Have really been wondering about the current NS Fuzz DH bike. Both Kye and GB were top guys on previous teams. Both really struggling with results on the current frame/suspension, it seems.

Afterschoolsports (Jul 14, 2022 at 11:09)
If the idler isn’t good enough and it needs an O Chain, something really isn’t working well on the bike.

Mattysville (Jul 14, 2022 at 14:00)
@naptime: it came about when everyone decided they needed 100+ point of engagement on their shiny hubs and all of a sudden every little bump created kickback.

Chippps (Jul 14, 2022 at 12:22)
In a 6 bar I believe the extra members are generally used to further modify the stroke usually in the last part of the travel. If you look at the suspension motion of the Yeti 6-bar e-bike, you can tell a little better how it can work. There is an inflection point in travel after which the additional linkage comes into play and ramps the progression so it feels more bottomless at the end of the travel.

emarquar (Jul 14, 2022 at 14:09)
So I played around with commencal's in a linkage software a while back, so I can't be incredibly specific off the top of my head, but:

With the 6-bar the lower and upper links are now coupled and very small tweaks to where that middle link is placed can have major impacts on the progression and shape of the leverage curve - you can tune in all sorts of curves that would normally need totally different linkage designs. Also, because of this tunability, frame designers also can exert more control over the anti-rise and anti-squat curves - they're less coupled to the design of the leverage curve. Like, with a standard horst link design, increasing progression or increasing rearward axle path or lowering antisquat all have predicable consequences, and you're just trying to pick the best set of trade offs to achieve the feel you want. With a six-bar, it seems to my less-than-professional eye, there are fewer trade offs that need to be made.

boozed (Jul 14, 2022 at 16:26)
It gives the designer more control over the shape of the anti-squat and anti-rise curves and they can change more dramatically through the suspension's travel.

In some cases (e.g. Yeti, Polygon) it's done because there's now a motor where you'd normally put a pivot.

southoftheborder (Jul 14, 2022 at 18:14)
Nope, they took Felt's Equilink from the start of the century and changed the rear pivot from the seatstays to the chainstays.

JamesR2026 (Jul 14, 2022 at 18:13)
It might look similar from the drive side but it's a totally different suspension system and layout, not just an idler bunged on. Look at all the photos, not just the first one.
Below threshold threads are hidden

mattbeer (Jul 14, 2022 at 11:04)
@justinfoil "Spotted" is the tag line of Pinkbike's articles that feature a bike in the prototype stages being actively ridden, whether that's seen on the trails/track or provided to us.

Still got that all encompassing "Reviews & Tech" tag despite being definitely not a review.