Mar 19, 2012 at 5:21
by Matt Wragg
Share
Tweet
Enduro pinner, beer connoisseur and facial hair enthusiast, Mark Weir is a bit of a legend by all accounts. We collared him at the Cannondale team camp in Finale Ligure, Northern Italy, to take a look at his Cannondale Jekyll enduro race bike. He's not the kind of guy who takes notes on the precise angle of his headtube, how much his bike weighs or what the tyre pressures are - he prefers to get out and ride hard. Talking to him after, he admitted that last year he built his bike and thrashed it until he started feeling guilty enough to strip and service it many months later... 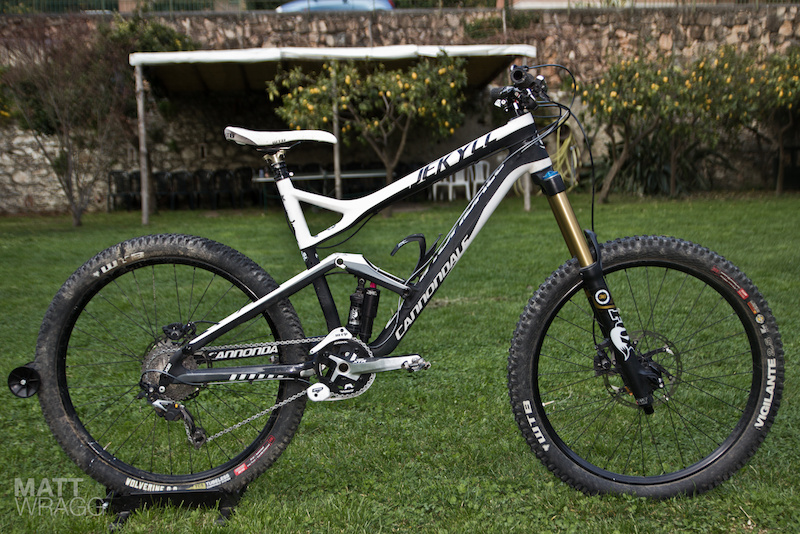 This is his carbon Jekyll for racing this year. Cannondale is very proud of the how stiff they have made the linkage, with big 15mm axles all round and that big piece of carbon over the top keeping everything in check. Mark describes it as the only bike he's ridden that is so stiff that it oversteers.

At the heart of the bike is the unique Dyad shock. Built in partnership with Fox, Cannondale has a raft of proprietary technology tucked in there. This one on Mark's bike is a prototype based on the slightly longer stroke shock found on the Jekyll's bigger, more descent-orientated brother, the Claymore. This gives his bike "slightly more" travel than the 150mm these bikes usually have. With the top-down view of the shock, you can see the separate rebound adjusters, as the shock has two modes: one for climbing and one for descending, that can be set separately.

Up-front Mark runs a big 180mm Fox 36 fork. Although it outmatches the rear travel by 30mm (with the stock shock, anyhow) he doesn't find that the bike feels unbalanced. Most important of all is the head angle. For the speeds that he likes to attain, the Jekyll is a little bit steep, so the big fork stretches it out nicely. Cannondale is currently working on an Angleset for the frame with Cane Creek, but it is not available yet, and he does say that if he could get the angle he wanted, he would prefer to run a shorter fork. Inside is a coil and the RC2 damper, weight doesn't bother him much, but damping out on the trail is everything. What you can't see is that his 36 has Fox's 2013 internals, the main difference being an air-assist in the spring leg. 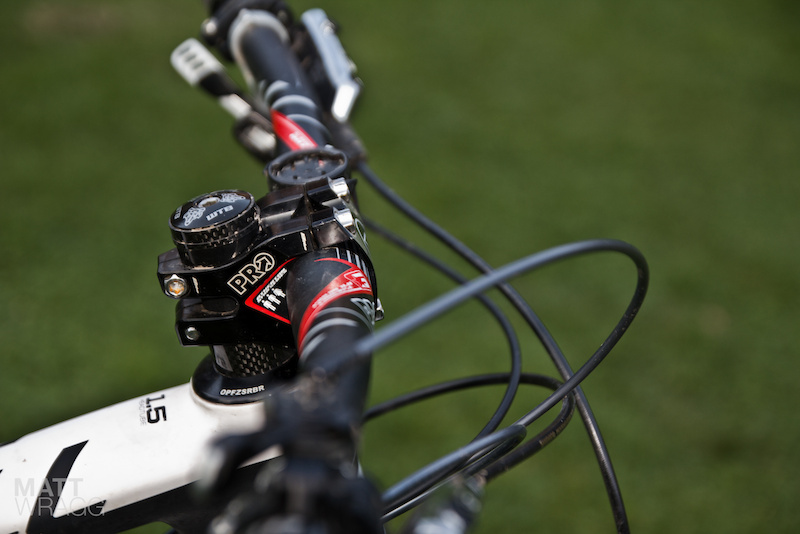 After talking to Fabien Barel on the Trans Provence last year, Mark is trying out his idea of a bigger frame and a tiny stem to help him feel more inside the bike, rather than on it. Although when you meet him you kind of assume he's a big guy (he's got that kind of presence) he is actually only 5'9" tall. With this setup he has gone up from a medium to a large frame with a 40mm stem to keep the length down. He's not 100% yet, but it doesn't seem to have slowed him down... 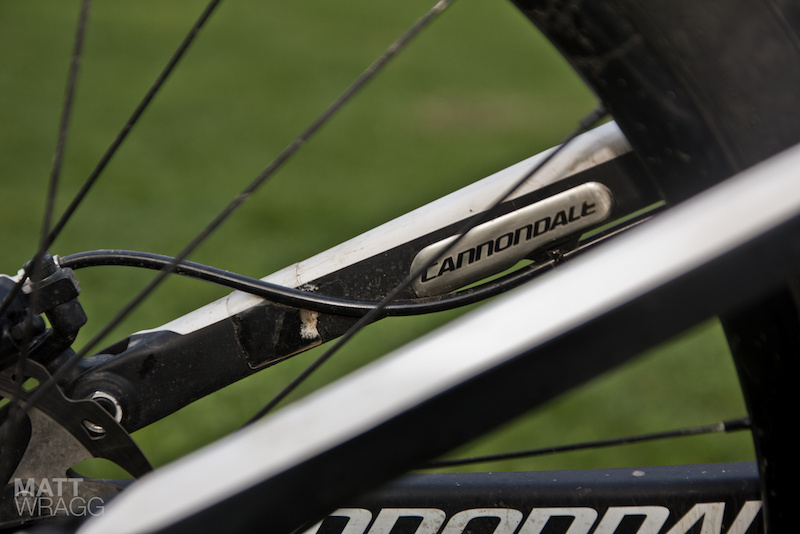 One of the reasons Mark is so happy on Cannondale: that little metal plate there was added by Cannondale after Mark fedback to them that the cable rub there was causing problems with the frame. 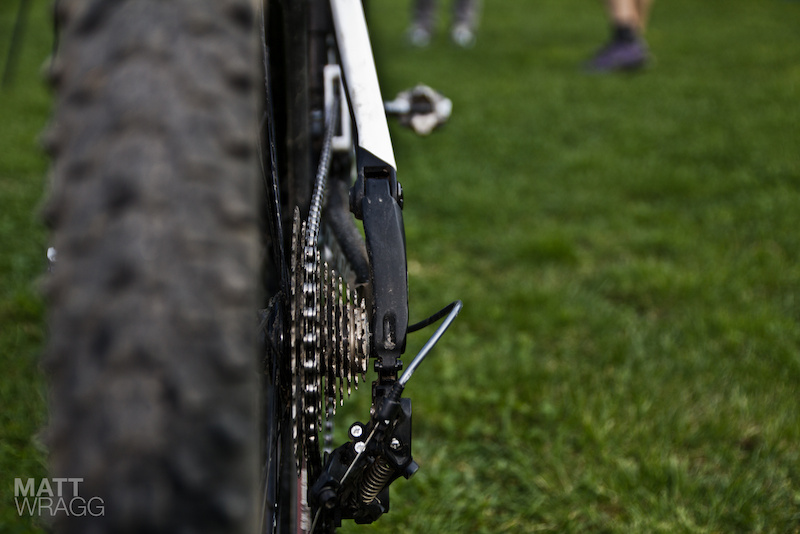 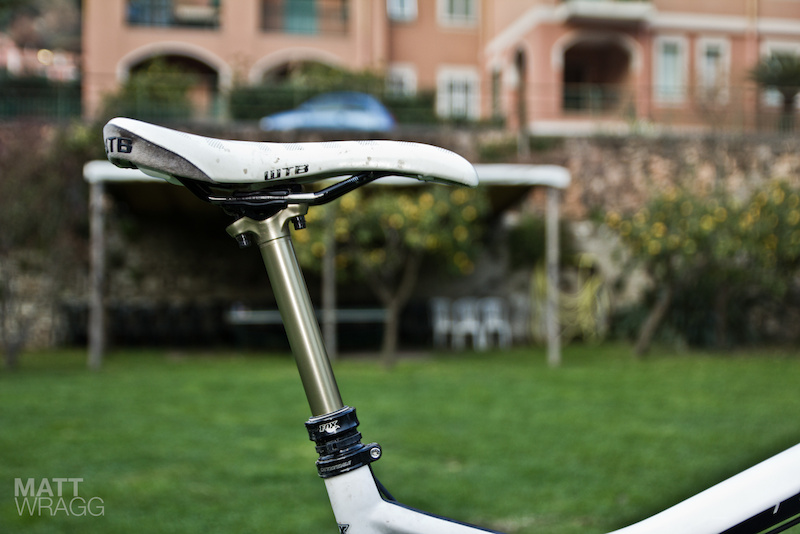 Mark is one of the lucky few to have got their hands on Fox's DOSS height-adjust seatpost. 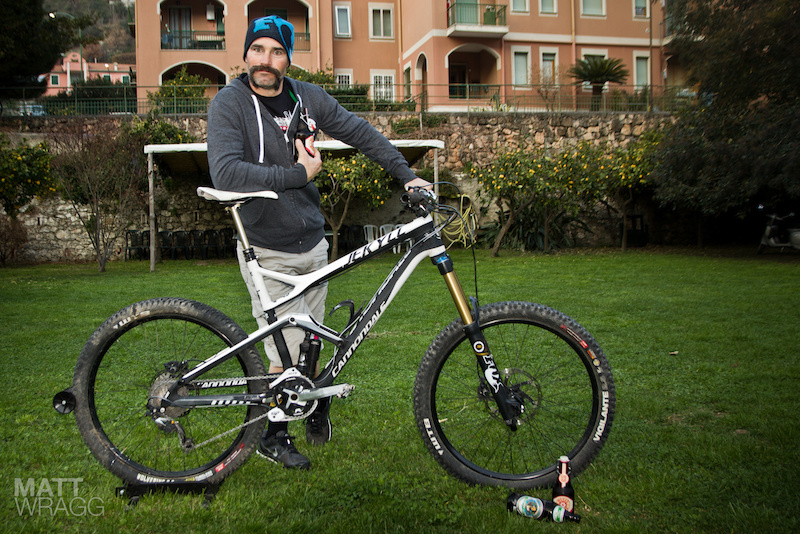 "Yeah, I want everybody to think - that guy's weird."

EddyDave (May 6, 2012 at 5:04)
I own a 2012 Jekyll 4. Seriously amazing bike too. Silly stiff! And fast.... It's faster than me, which does occasionally cause a few issues between us. But we generally manage to work out relationship problems with a good old beasting.

EddyDave (May 7, 2012 at 5:38)
I have discovered over many years of grooming different styles of facial hair that I am better suited to a dirty moustache gained by riding in the extreme weather conditions of the UK. And by extreme I mean wet. Wet makes mud. Mud makes me dirty.

neilcarnegie (May 6, 2012 at 1:38)
Funny article... opens with "he is not the kind of guy to take notes on the precise angle of his headtube" - before spending the rest of it going through all the tweaks he's made to the bike ans setup to get the exactly the head angle (and they're building an angleset for him..) and ride he wants out of the thing.

Snfoilhat (May 6, 2012 at 9:39)
@gserrato Look at the difference in 'reach' of one frame and the next size up; subtract that difference from the stem as a starting point.

RaleighVoid (May 6, 2012 at 9:39)
depends how much of an increase in size the frame is, at the end of the day you wanna be comfortable on the bike

JameyP (May 9, 2012 at 8:12)
If you want to see what changing stem length and rise does to reach and height, here's a sweet little website that does all the calculations for you: www.brightspoke.com/t/bike-stem-calculator.html

And, for the record, I run a larger frame with a shorter stem...definitely the way to go for aggressive riding.

wake-n-rake (May 6, 2012 at 13:45)
"One of the reasons Mark is so happy on Cannondale: that little metal plate there was added by Cannondale after Mark fedback to them that the cable rub there was causing problems with the frame." Why is it in the wrong place?!

grizzlyatom (May 7, 2012 at 19:34)
I wasn't sold on the look until I saw one in person. The beauty of this bike is best appreciated when you're standing over it. I have yet to see another bike that sports a top tube that is as wide or wider than a 1.5" headtube and a downtube that dwarfs a water bottle. This entire frame is beefier than a T bone steak. I found myself making moto noises with my mouth when I rode it.

FreddyBear (May 6, 2012 at 3:52)
My Claymore 1 has taken some brutal hits and it never let me down. You may not like the looks of it, but the stifness of the frame and the brilliant Fox Dyad shock will make you grin so much that you will naturally grow a handlebar mustache, just to accentuate the grin. That is, of course, if you are old enough to grow a mustache.

koochdog (May 10, 2012 at 12:22)
Cool bike. looks like he is sporting the Shimano Shadow Plus rear deraileur. cool. XTR cranks.
But 180mm for Enduro racing?? Wow man, and a 1x10. Imagine the climbs? Tough sledding, but then again, he's a pro.
I ride a Scott Genius which is a similar bike. I've tried the Jekyl. Nice ride too for sure. But I like the Genius Twinlock controls way better as they control the rear suspension 100% better than the Jekyl/fox shock. I too couldn't get it to work properly. Kind of a messy setup overall.
Scott Genius >>>>> Jekyl. No doubt. Oh burn!

I can't say that this would work for everyone. As I pointed out to some friends, I'm 200lbs and accustomed to riding aggressively at the controls. Left over from my motorcycle days I suppose. I bring it up because I don't know if it would work with some one that is more slight and less aggressive.

Did not like it at all, in the end i changed to a rz onetwenty and rode the pico del tauro 3000 vertical feet and pico de las nieves 4500 vertical feet trails faster and in better control.

The adjustable rear travel is meaningless, minimal impact on pedalling (sitting) performance. 32 mm talas is a waste of aluminum, impossible to hit the sweet spot between suitable LSC, and plushness, the 36 talas eats bumps much better, and it`s easier to adjust out brake dive without performance sacrifices. Spent a lot of time setting up the rear suspension, never got it to be plush for extended descents without being silly-soft for pedalling, nowhere near a Horst link, ABP, or VPP bike. The rear end always felt kinda "dead".

My 5cents: -Missed attempt at making a light DH-focused trailbike, an XC-racers alibi for being a mountain biker, looks good in the garage

EddyDave (May 10, 2012 at 14:11)
Can't comment on the performance of the 32 as I am running the RS Sektor. But in regards to the rear sus. Not really sure how you failed to find the advantage of the rear suspension design on this. If set up right the short (90mm) offers a great pedalling platform for the climbs and smooth bits of trail. Then the descend mode is perfectly capable of taking whatever you throw at it.

But if you didn't get on with it, fair enough. Just seems to me like a setup issue.

airsoftesneeto (May 6, 2012 at 0:08)
i really hope he does well this season, it does seem he has fallen off the pace. but man happy cinco de mustache weir

WAKIdesigns (May 6, 2012 at 2:10)
Eee try first to get to his pace then complain... For sports where "fans" have expert opinions on athletes' performance go for football and Nascar

flowyridestilltherestofmylife (May 6, 2012 at 3:17)
The only thing missing are WTB Weirwolf`s. And good idea with the beer. Haha

orcello (May 6, 2012 at 3:24)
I'm all for having your own identity and differentiating yourself from everybody else but damm... There is nothing aesthetically pleasing about Cannondale bikes. The Jekyll is no exception. I'm sure it works great but the only eye poping piece in the pic is the beer and the stash!

theperfectline (May 6, 2012 at 4:23)
gotta say, I thought the complete opposite. This bike looks dam sweet!

sniggled (May 6, 2012 at 5:30)
Those shocks do blow up and it's a bummer when it does happen, it's not like you can swap another shock in to keep you going like you can with most other bikes.

But as I'm not I'll agree that IF it did blow up, you're a little screwed. However technically both shocks would need to blow for you to be totally screwed. So there's always a spare?

seraph (May 6, 2012 at 22:37)
You're missing my point. I was alluding to the fact that Weir used to ride for SC on a Nomad C. His bike looked a lot better back then. Also I would never ride a Cannondale.

domminator (May 8, 2012 at 13:30)
I actually own a carbon nomad and have properly thrashed it, so yes i would say ive ridden a carbon nomad. Also ive spent a good amount of time on a jekyll too and the jekyll is like the carbon v-10 of trailbikes its just cheating.