Feb 9, 2014 at 5:09
by Matt Wragg
Tweet
If we say to you: aggressive, flowy and aerial, with a very unique riding style, does it mean anything to you? Now if we add that his video filmed in Whistler Bike Park (Canada) ranked 7th among the most viewed videos of 2013 on Pinkbike, do you guess who this new recruit is?

No more suspense, it’s now official: Remy METAILLER will ride for COMMENCAL in 2014! 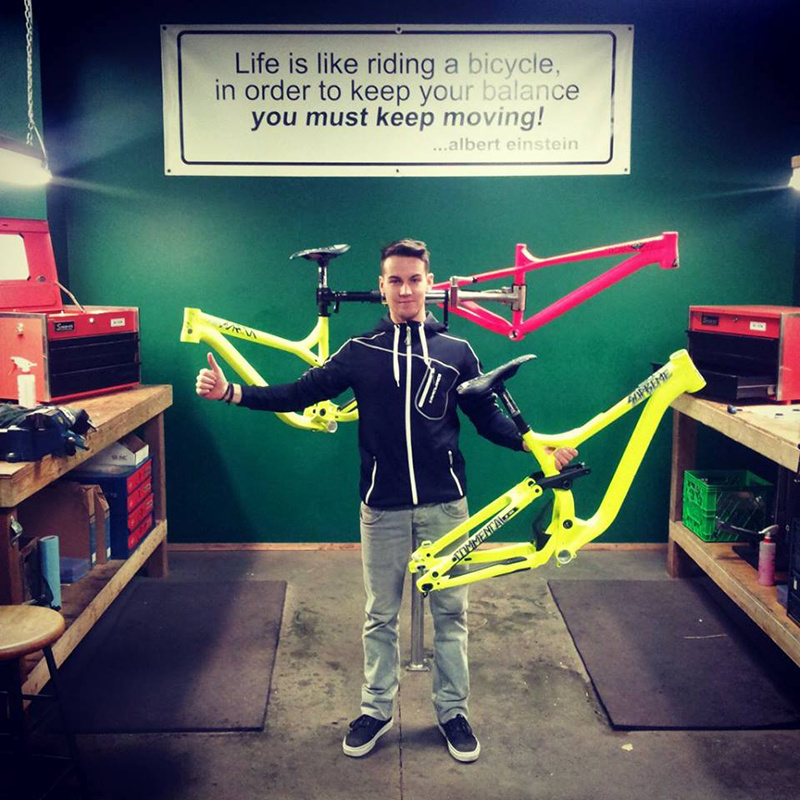 There was no debate at COMMENCAL’s. In one video and one video only, we understood very quickly he needed to ride on our bikes! The “Flying Frenchy” knows how to get himself talked about, so we can’t wait to see him sending whips all around the world! Originally from France, Remy fell in love with British Columbia where he is living for a part of the year. As a fervent follower of Urban DH, he will attend the first round of the City Downhill World Tour in Valparaiso, Chile next February 23rd. Ultimately, he is planning on entering the North-American rounds of the UCI World Cup circuit next August, where he will be joining a certain Faustin FIGARET…

The words of the person concerned:

“I'm super stoked to ride for Commençal! The perception I have of Commençal, as an innovative and outstanding company, is very much in alignment with my plans. It was very natural to partner with them. From the very start, the people I have met from the company have been very helpful and supportive of me. The bikes from Commençal are known to be reliable, fast and fun and that's what drew me to the company. I'm really looking forward to riding DH with the Supreme and also Enduro with the Meta AM 650b this year. With Commençal behind me, you will see more of me at the Whistler Bike Park and also at select downhill races throughout North and South America. I'm also very excited about sharing my riding with you in the many photos and videos I'll be working on this season.”

Follow him on www.facebook.com/remymetailler and instagram @remymetailler
If you haven't seen Remy in action, check him out here:

Good for him. If I were Commencal, I would play out this sponsorship differently than the typical sponsorship because Remy is so unique. He made a name for himself riding a bike park like no one else has, not from competition and results. So rather than send him to a few expensive WC DH and Urban DH races where his style and creativity will be diminished in favor of results, why not send him and a video crew on a world bike park tour? Have him visit each big name bike park for a week or so and just film him destroying it -- sending big, creative lines and throwing down style on every feature -- just like his video edits. I would rather watch video edits of that than see an occasional picture of him in race results. Plus, I suspect that most bike parks will jump at the opportunity for publicity and give him and the crew some lodging and access kickbacks in exchange for a high-profile video edit. So from a cost perspective, I cannot imagine many bike park trips would be any more expensive than WC and Urban DH trips. Just thought I'd throw that out there since a sponsorship formula like that has never been done and Remy seems like the perfect candidate for it.

fabdemaere (Feb 9, 2014 at 9:00) (Below Threshold)
They are playing this sponsorship differently, Commencal clearly said that they would be focusing a lot on production of media content.
@cretin82 Max Commencal is the official team manager

rogerwaters (Feb 9, 2014 at 9:45)
I agree, pro skiers have done things like this and they have worked out great and got a ton of people super stoked.

the-mountainbart-experience (Feb 9, 2014 at 9:59)
I would just like to add that I'm pretty sure it has been done with the coastal crew..

coot83 (Feb 9, 2014 at 10:03)
I agree with you Jabbs, that quote is genius in explaining the opportunity here. Im always on the lookout for Remy material now...Shred hard, send hard.

awethentic-life (Feb 12, 2014 at 20:26)
technically, in a trackstand you are never standing still, but rather making micro-movements forward and backward

bcbud (Feb 9, 2014 at 10:06)
Remy actually did race in whistler. He dominated the phat Wednesday races and did well at crankworx. So he not only put out bagel videos but he has the results to be a contender on the WC if he puts the time in. Plus he's French they have some fast bastards. Well done sir.

ChachiArcola (Feb 9, 2014 at 7:15)
I was really hoping for Giant after his last vid with him just destroying the Glory! Good job though Remy! You're a shredder like no other!

leftCoastBurn (Feb 9, 2014 at 8:39)
Congrats man!! Commencal is a sik brand. Never ridden one but they are the best looking bikes out there imo. Been quite a few commys poppin up around the so cal trails these days

SKMTB849 (Feb 9, 2014 at 9:27)
Honestly, any sponsor would be so lucky to have Remy because he rides so uniquely and he goes so hard. He is proof that any bike can withstand the most severe beating.