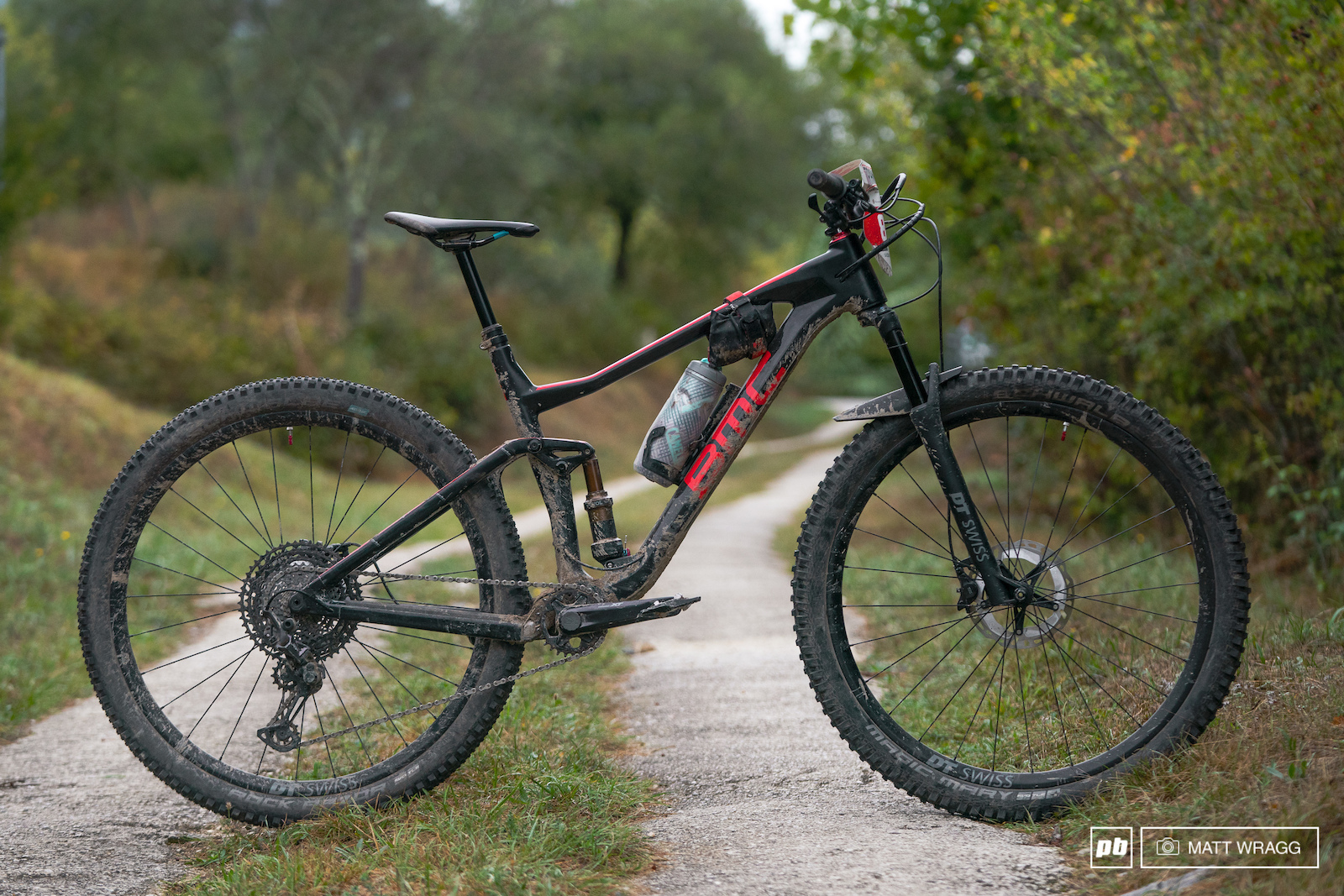 Mary Moncorge's
BMC Agonist
Bike Check
Sunday was not a good day for Mary Moncorge. A teacher and former enduro and e-MTB racer, she set the Trans V as her bike challenge for 2020. The weekend started on a high note with victory in the prologue on Saturday. Sunday morning started well, but as she went into the first climb something felt wrong, her legs were weak and she just couldn't hold the pace she knew she could in training. After she passed the second time check and began to head into the long, brutal climb to Col de Porte she started to run a fever and was forced to abandon before she reached the village of Loda on the lower slopes of the mountain (she saw a doctor Monday morning and is currently waiting for her COVID test results) 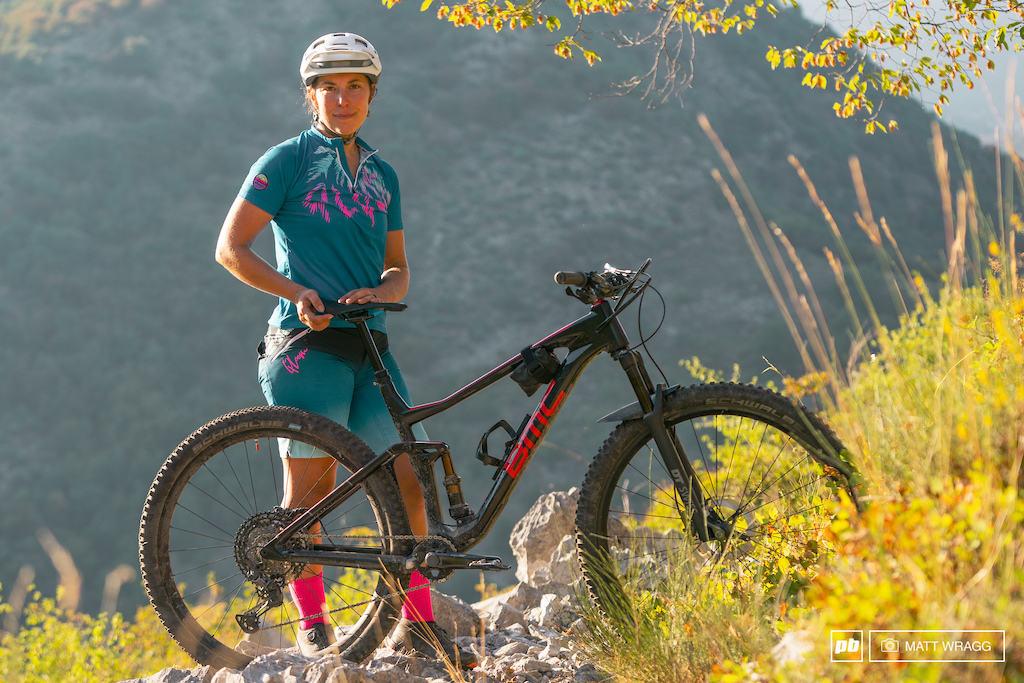 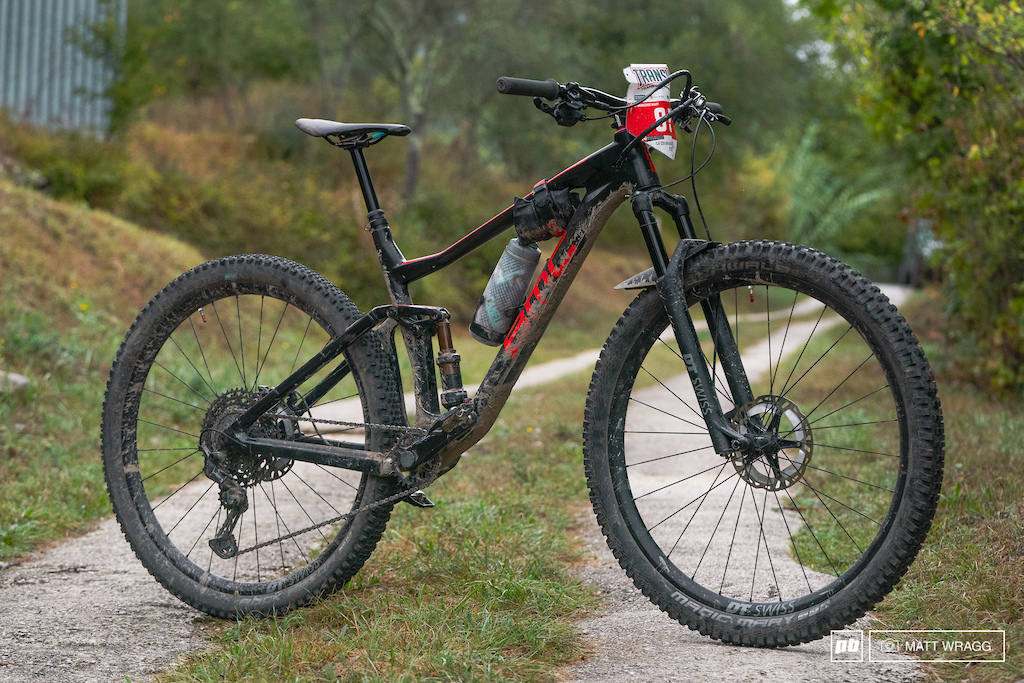 Describing herself as having a long torso and tiny legs, Mary went for the large frame to give her a reach of 450mm. Finding a bike to fit is something she struggles with - she doesn't buy into the idea that women need shorter reaches than men and would go longer than this if she could get a frame with a seat tube short enough for her. 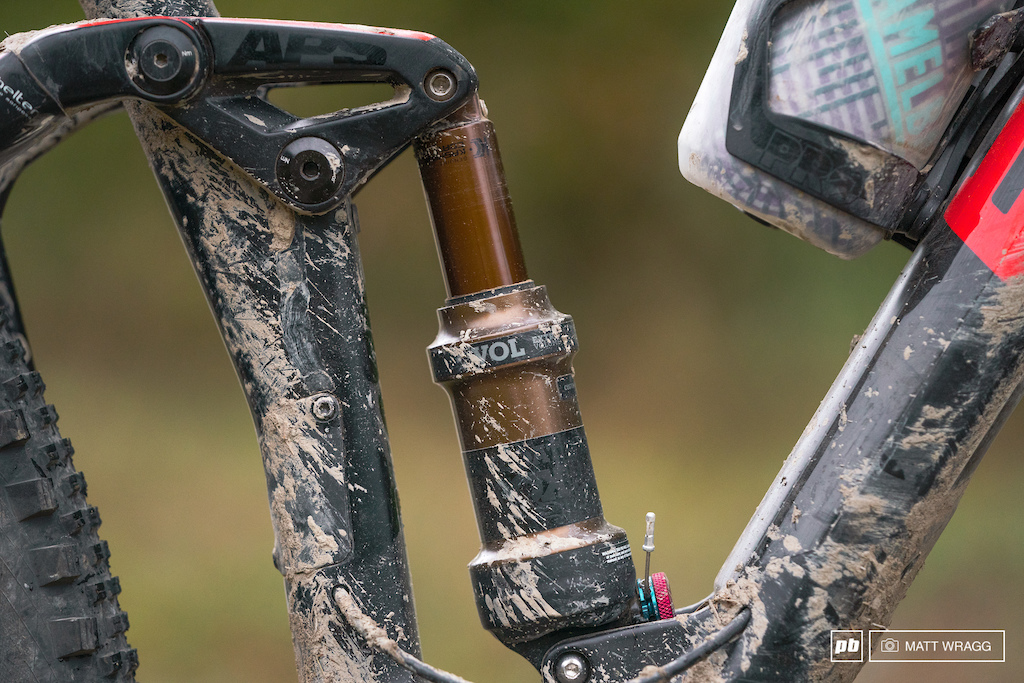 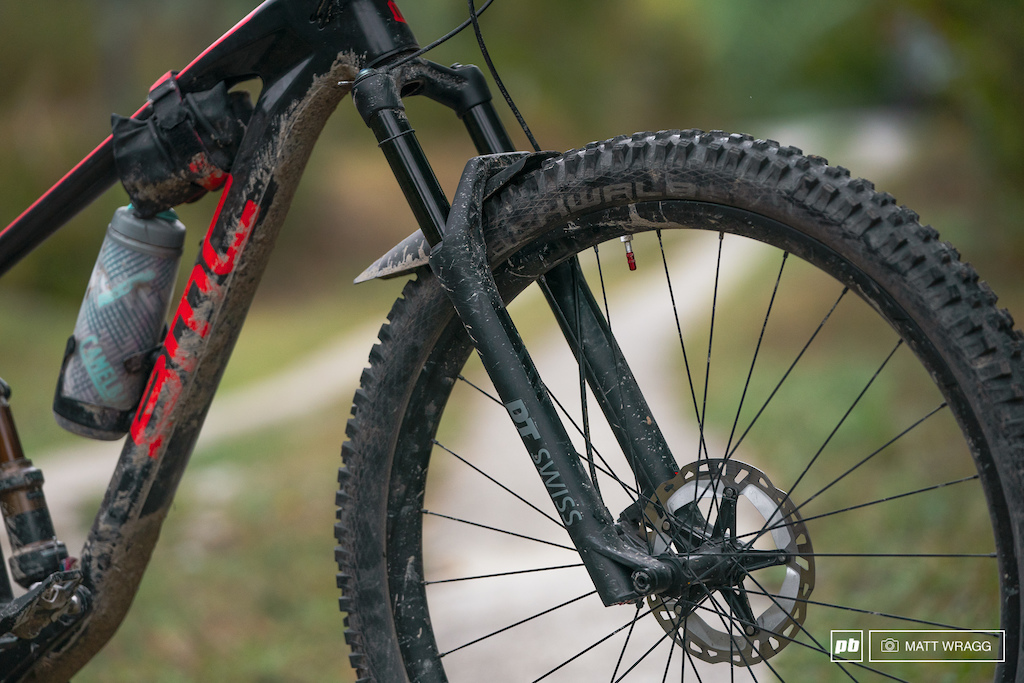 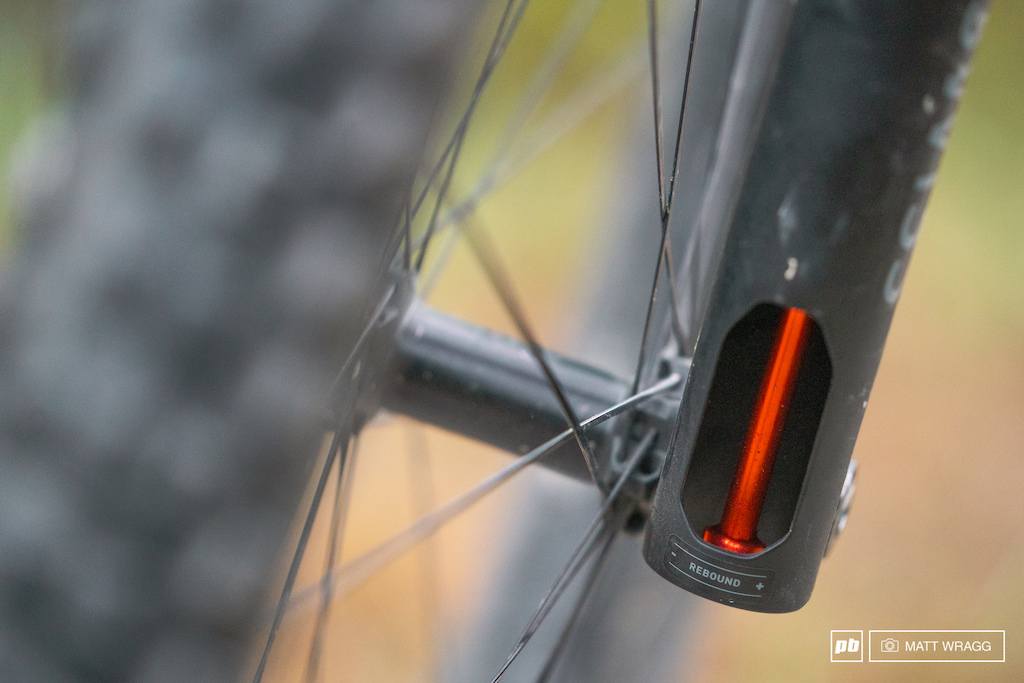 While from the outside the DT Swiss F232 may not look as wild as the Fox Stepcast forks, when you look closely at the details it becomes apparent that they are at least as ruthless in pursuit of saving grams. Mary has been going back and forth between this and the burlier F535, but chose the F232 for this race to save weight, although she admits that she is on the limit of this fork in this style of racing as it is a harder ride than the F535 and she has to muscle it to stay on top of it. She recommends that heavier or more aggressive riders would probably need to go up to something a bit more robust. 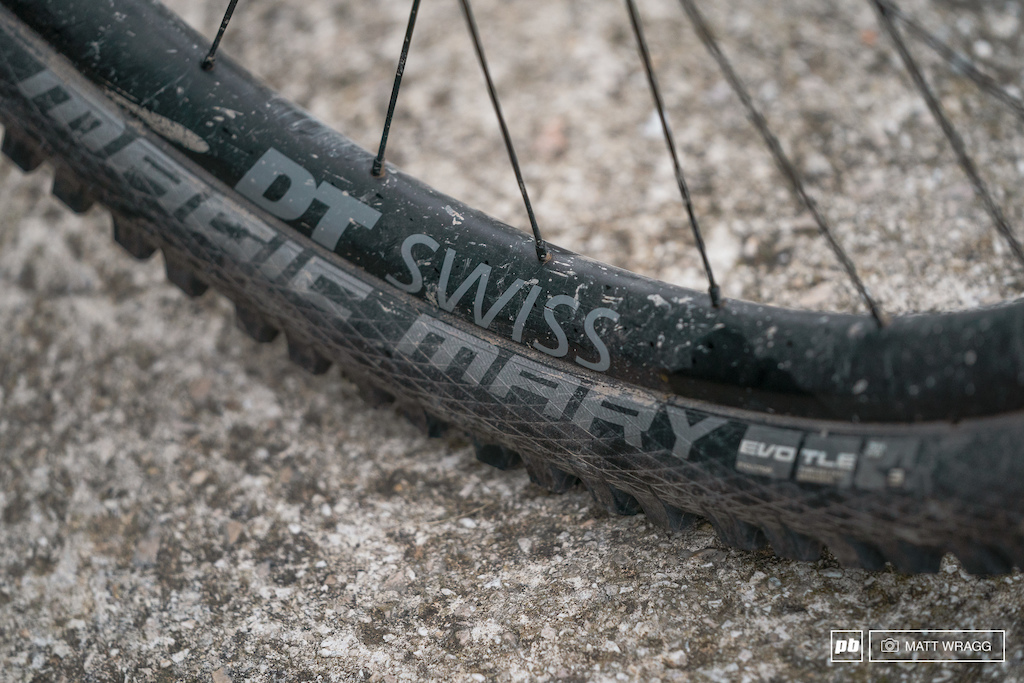 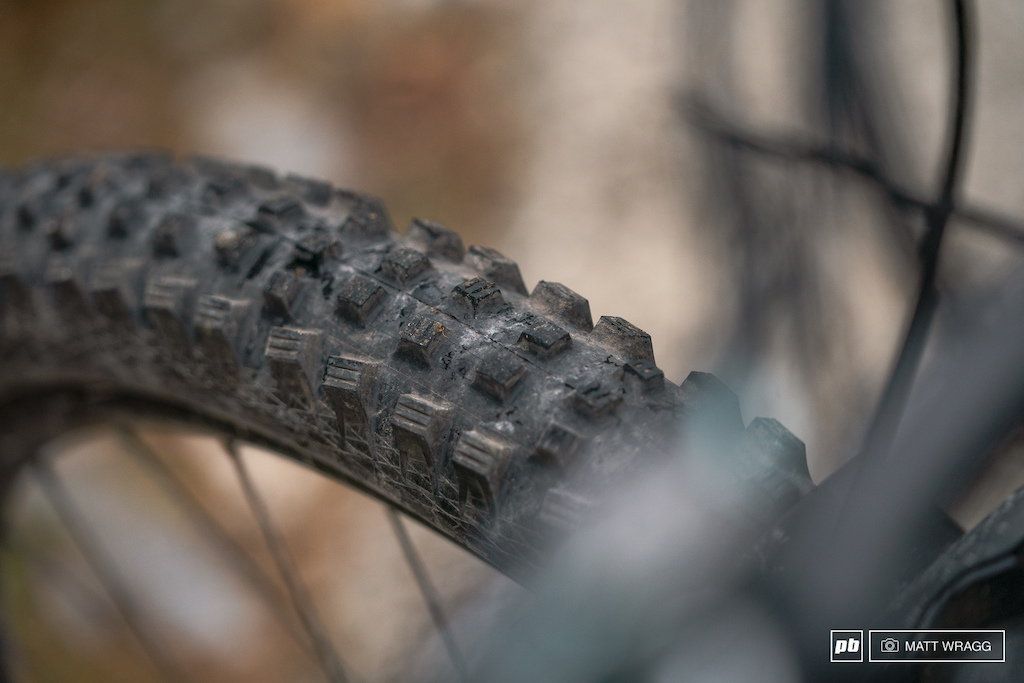 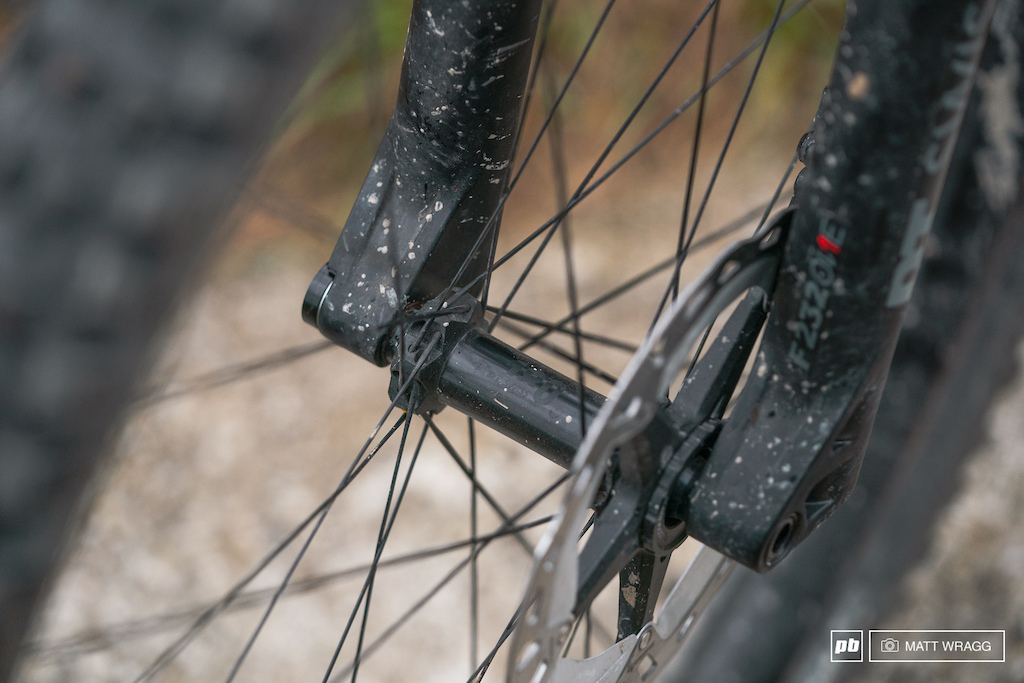 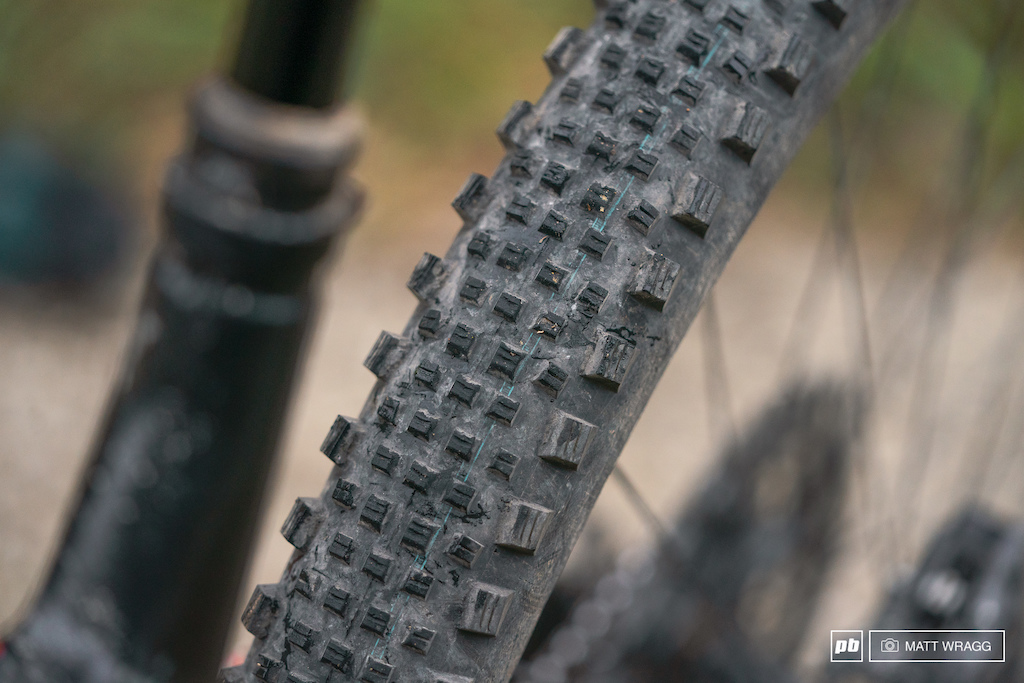 DT Swiss' updated carbon XRC 1200s are her choice of wheels - these are their XC race package, with a 30mm inner width and the ultra-fancy ceramic-bearinged hubs. They are shod with Schwalbe's Magic Mary and Rock Razor tyres, both in 2.35 in Snakeskin casing. This is an old tyre that is no longer in production - Schwalbe now only make these tyres in their heavier Super Trail casing, but for a race like this she found herself wanting more tread than an XC tyre could offer. At the rear Mary runs an Effetto Mariposa Tyre Defender rim strip for extra security. 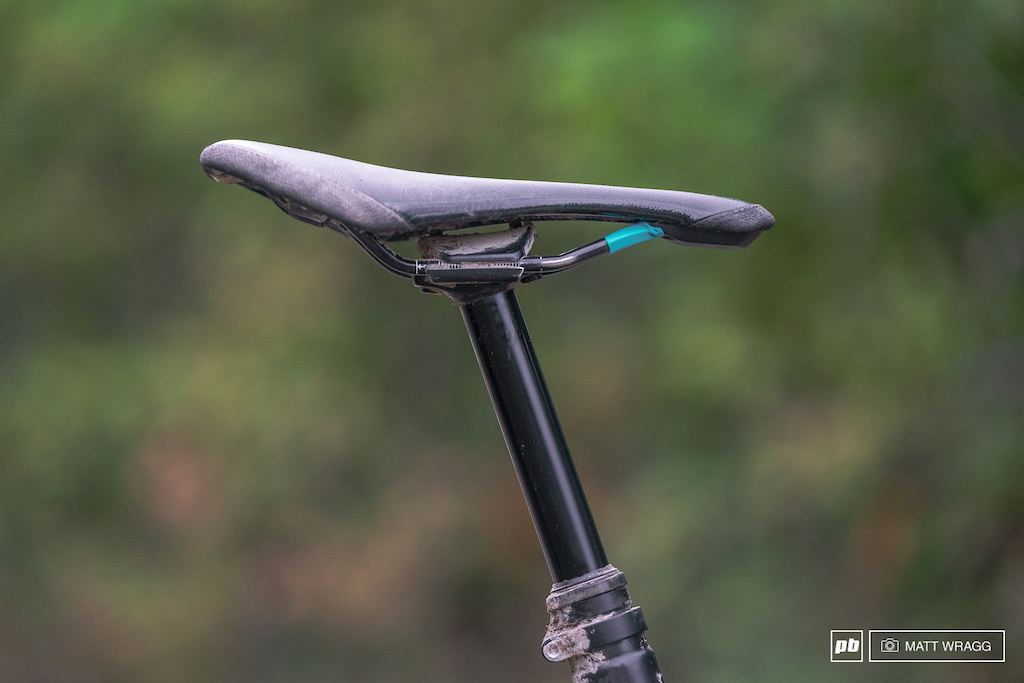 As a Shimano athlete, Mary initially built this bike with their Koryak Dropper post in 120mm, but the stack height on the post was too high for her to run it at full extension, so she switched it out for a One Up v2 - the ultra-low stack height on this post means she can get 140mm of drop in there and help keep her Shimano Pro saddle out of the way when things get ugly. 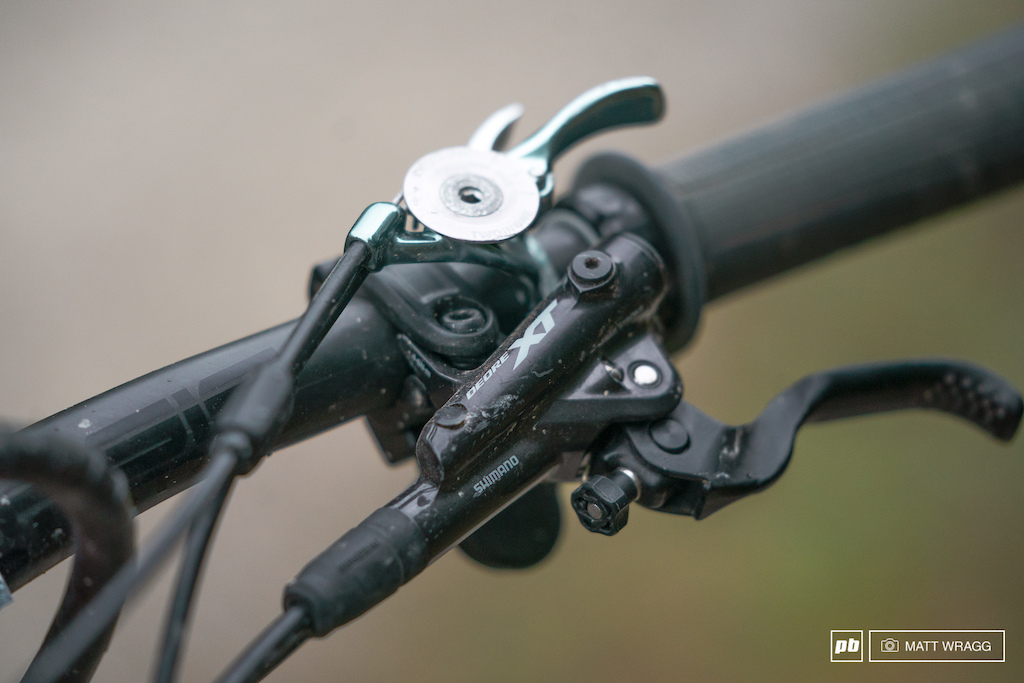 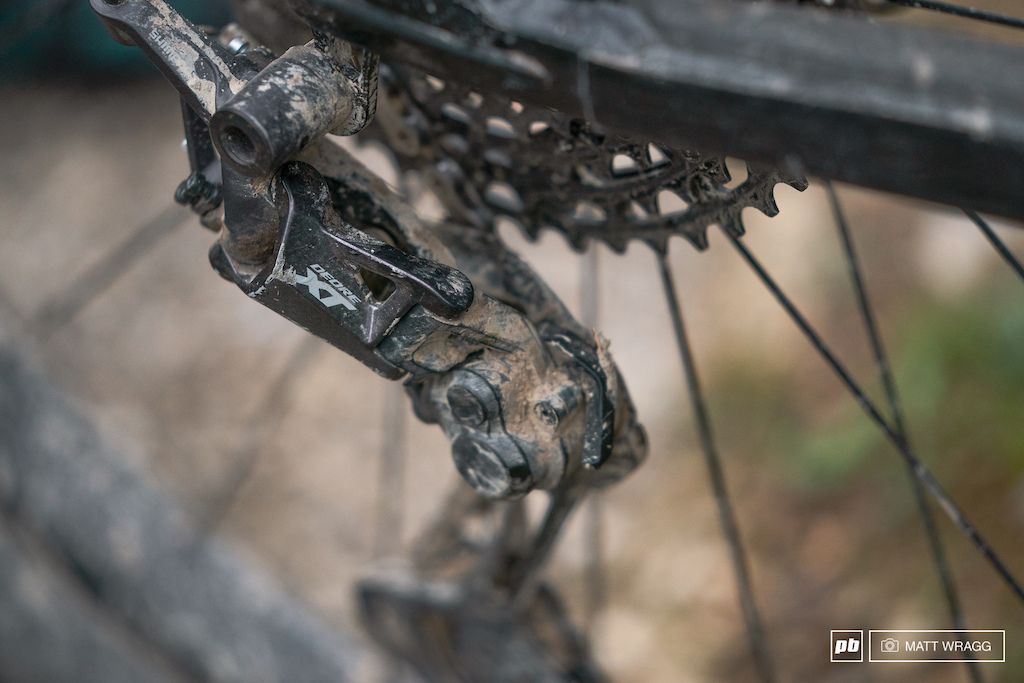 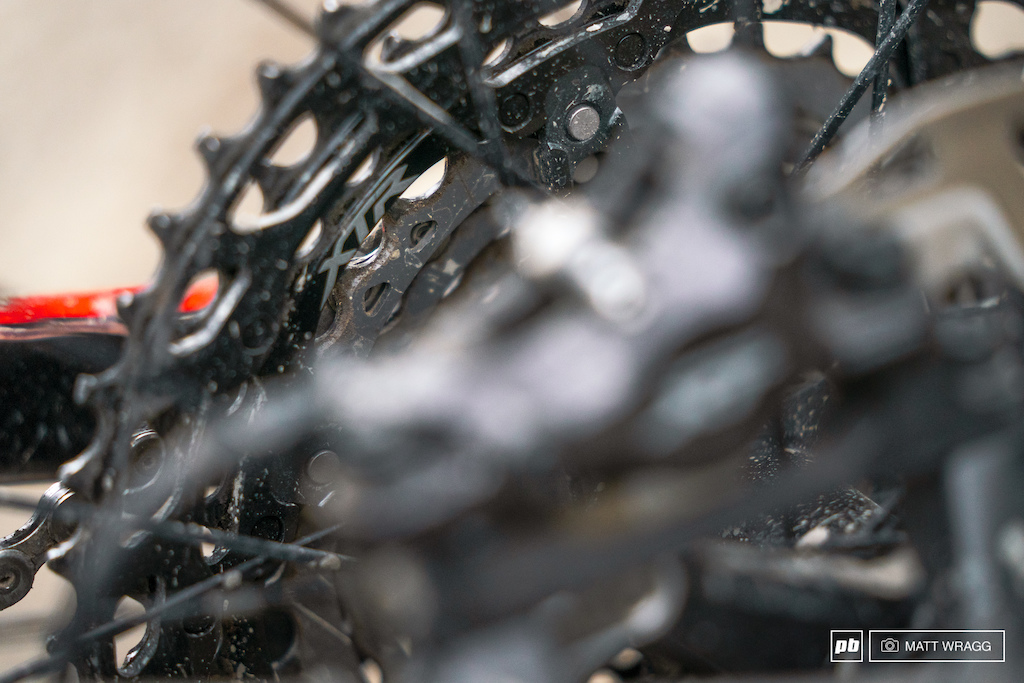 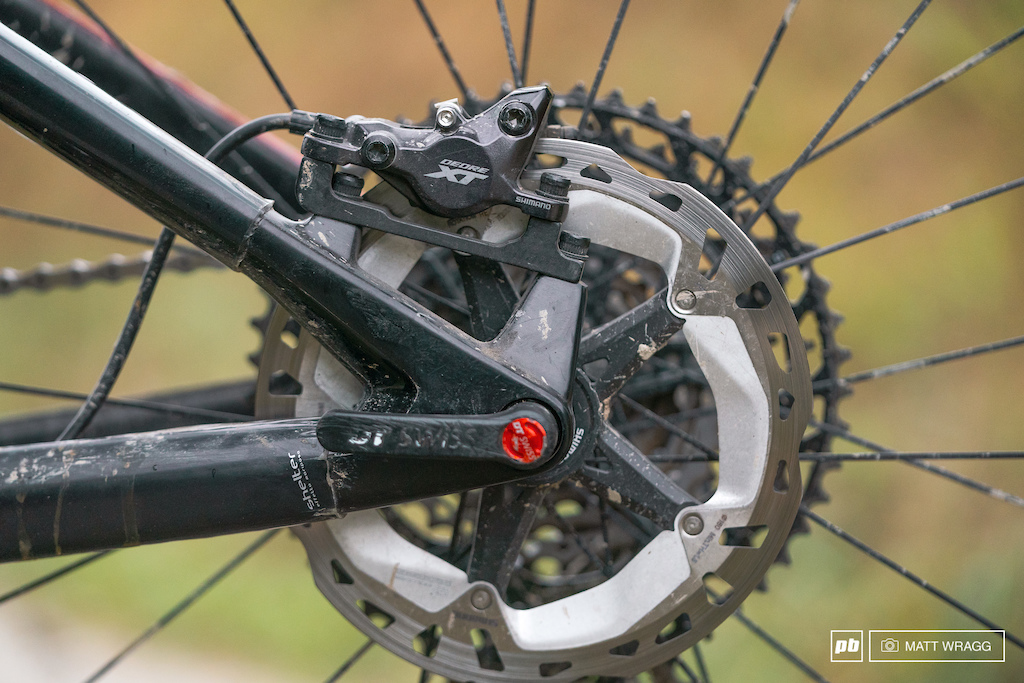 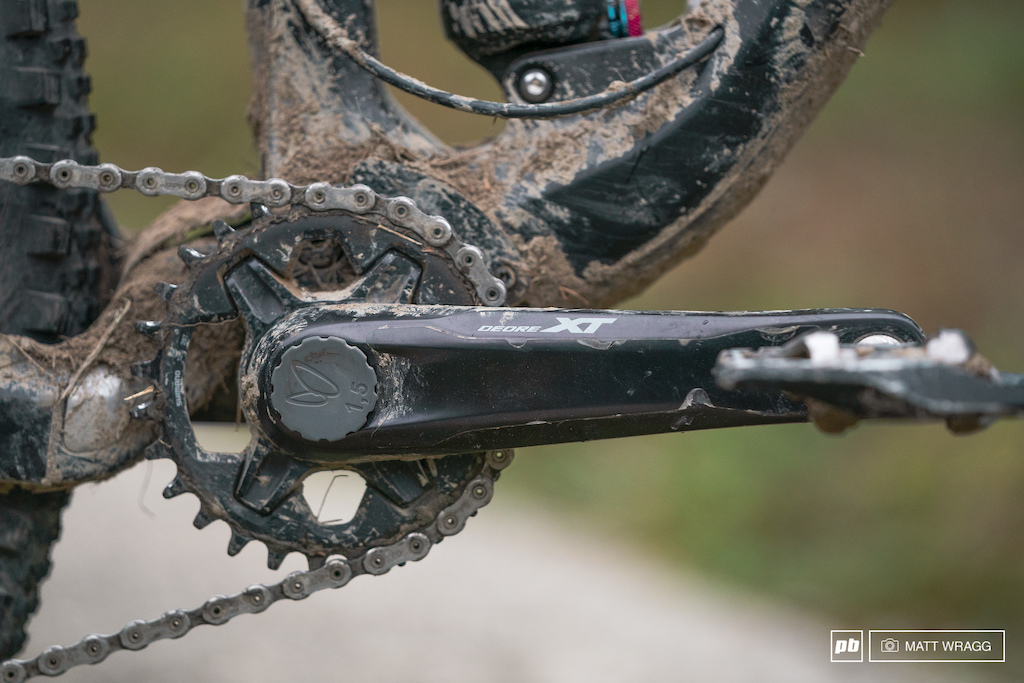 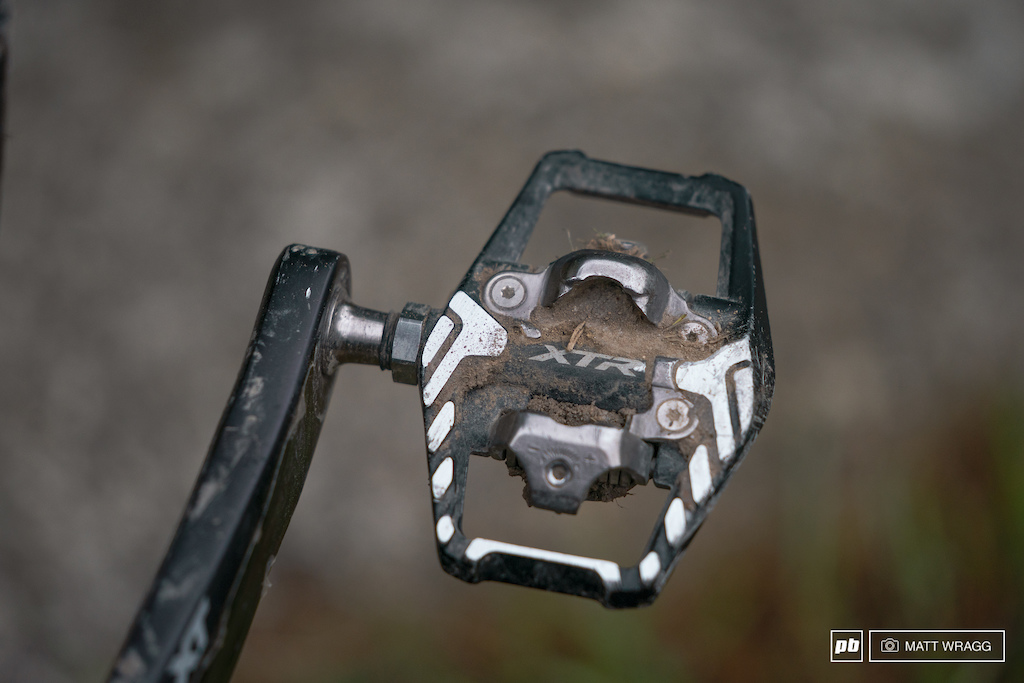 Mary runs XT two-piston brakes, but boosts the rear rotor up to 180mm as they handle heat build up better and provide slightly more precise control than the 160mm rotors most brands spec on their bikes - her Agonist is designed to run a 140mm rear rotor so she had to source a 40mm adapter (most DH adapters are 43mm). Her drivetrain is an almost entirely XT affair, with a 10-51t cassette and a 28t ring. Because of her short legs, she went for 165mm cranks with the optional narrower Q-factor that she feels help her put the power down more effectively. The two exceptions to XT are the cassette as XTR is a significant weight saving over XT and the pedals because Shimano sent her XTR instead of XT and the only thing to do in that situation is say "thank you." 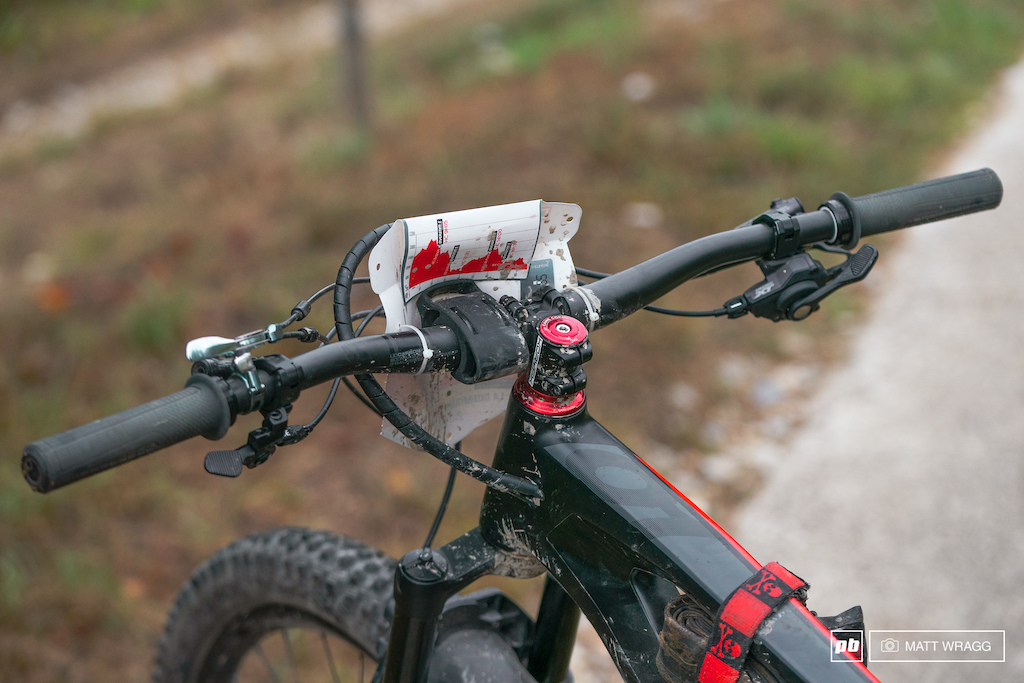 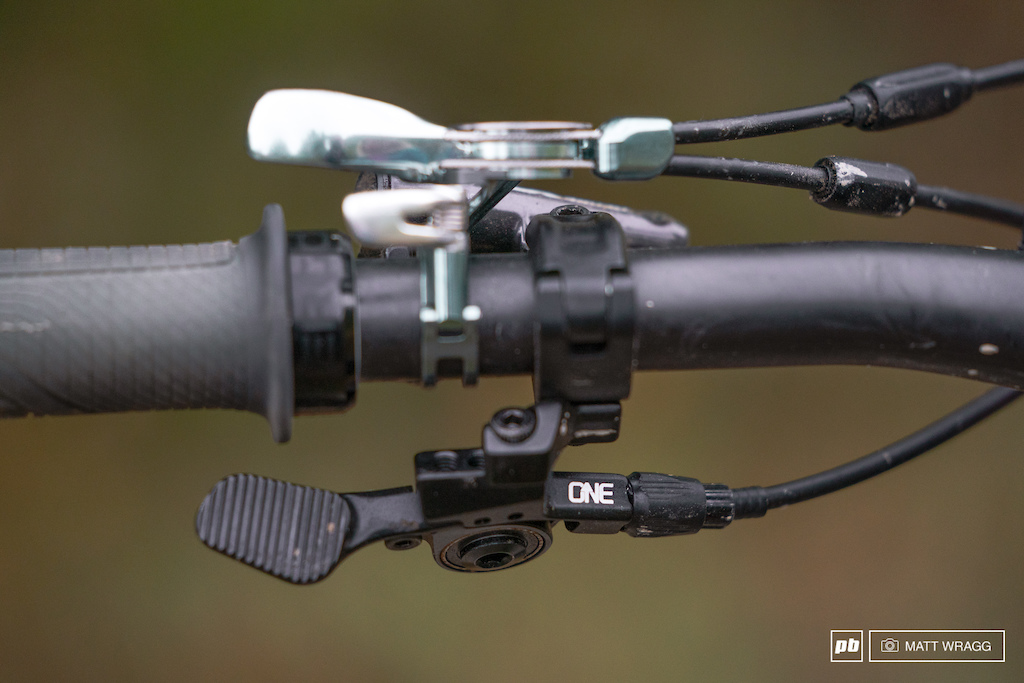 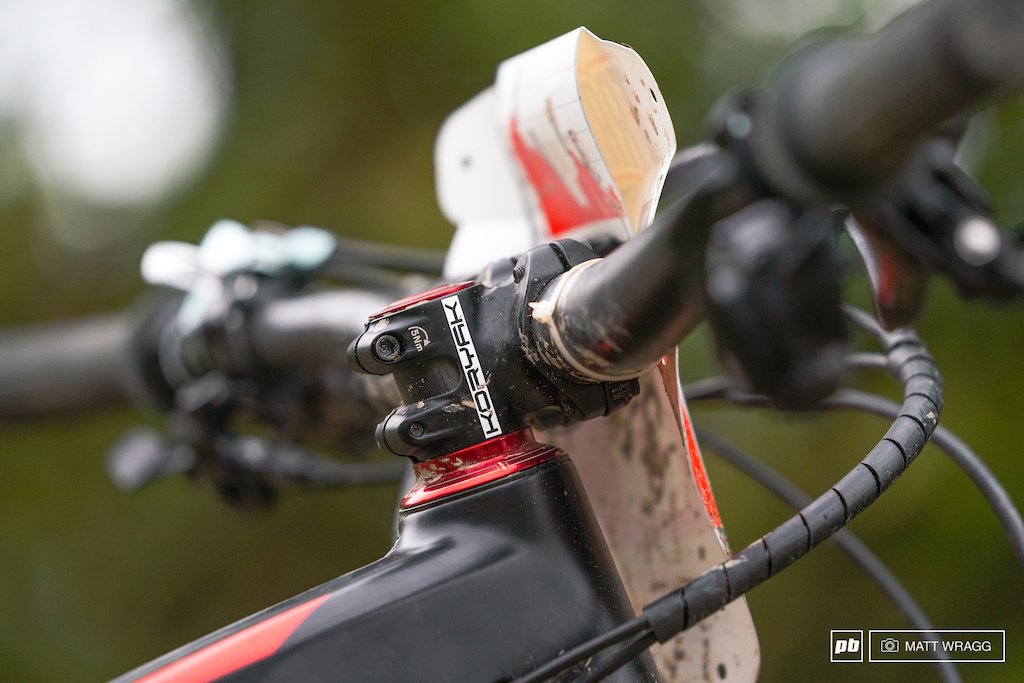 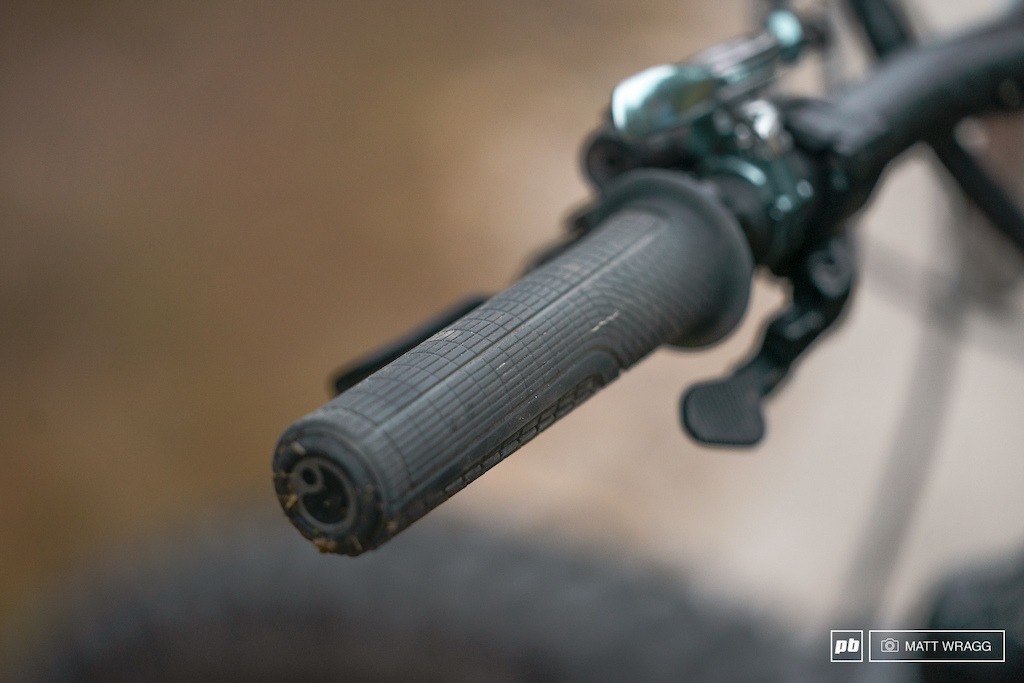 The cockpit is a Shimano Tharsis carbon bar in 20mm rise, cut to 760mm and paired to a 40mm Koryak stem. On the left-hand side of the bar is her dropper remote and above a dual DT Swiss 3 position remote for both the fork and shock. A set of Ergons GD1 grips in slim with factory rubber finish off her cockpit as she finds them to be good in the wet without gloves. 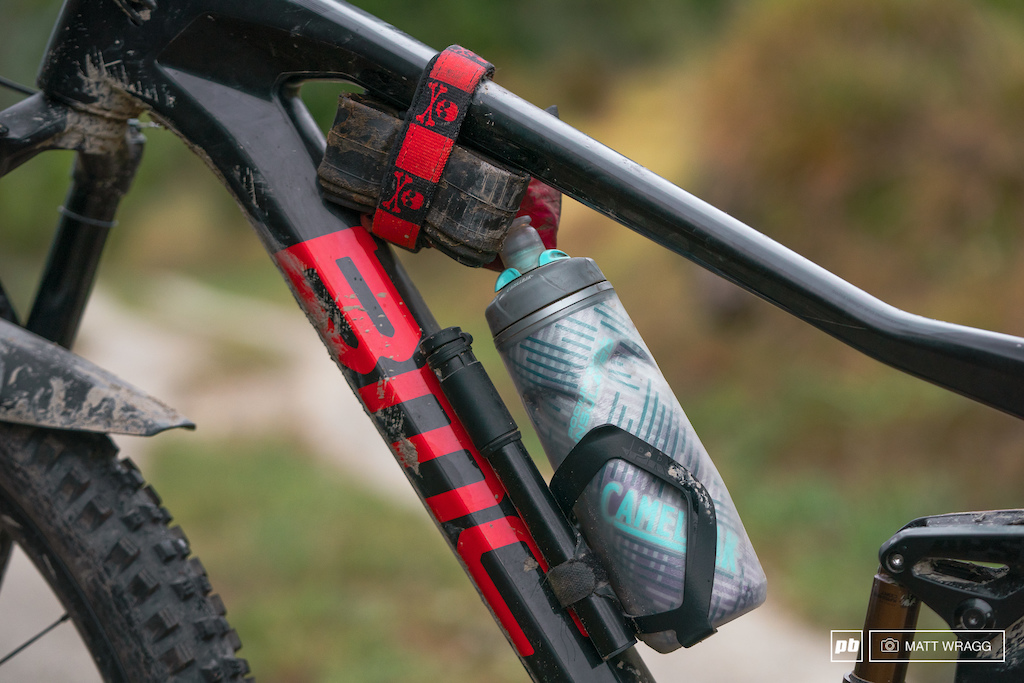 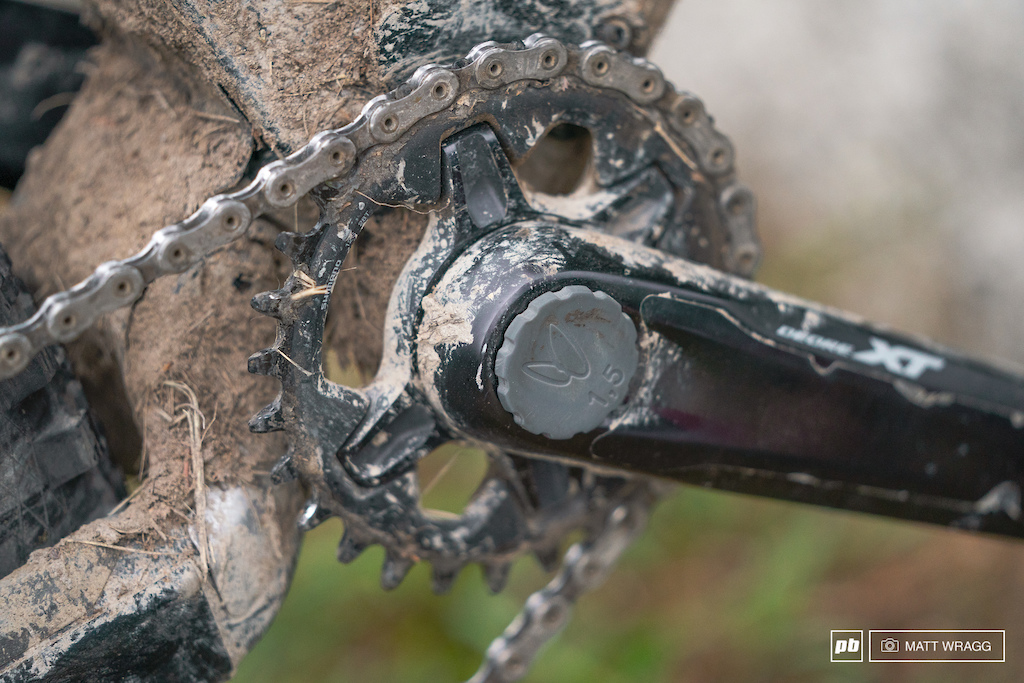 Finally all the storage - with tools and tube on the toptube, a pump on the bottle cage and Effetto Mariposa tyre plugs mounted in the crank.

Tweet
Must Read This Week
The SwitchGrade Will Allow Riders to Change Their Saddle Angle on the Fly
60740 views
Pinkbike Poll: How Important Are Water Bottles?
54735 views
The 20 Top Pinkbike Comments of 2020
52675 views
Throwback Thursday: The 12 Best Saves of 2020
51734 views
Colorado-Based Myth Cycles Releases the Zodiac: A US Made Steel, Single-Pivot, Full Suspension 29er
50988 views
Opinion: How True is the 'Dudes Who Shred' vs 'YouTubers' Meme?
46957 views
[Updated] Remy Morton Injures Both Of His Arms in Crash on Dream Track
44113 views
Check Out: Carbon Tire Levers, Flat Pedal Shoes, New Mini-Tools, & More
43964 views

pbayne29 (Sep 22, 2020 at 9:49)
Please keep the privateer bike checks coming. So much more relevant to most of the readers. I do like the full bling of a sponsored rider, but the choices and compromises here are much more informative to amateur racers. Would love to see it for pure XC and enduro too.

mtb-journal (Sep 23, 2020 at 2:33)
@marymoncorge: Very interesting and thoughful. Also the fact that she would go even longer on the reach :-) Well done and get well!

FloImSchnee (Sep 22, 2020 at 12:13)
Re: "and would go longer than this if she could get a frame with a seat tube short enough for her."
Well, the Agonist hasn't exactly short seat tubes.

frigoa (Sep 25, 2020 at 10:17)
Love this. I ride an Agonist too. Great bike. Has made me a believer in a dual lockout. Question about the customizations. Looks like a different headset. Cane Creek? Why the change? Curious because I've been considering an angle adjusting headset. I don't mind the 69.5 angle but I wonder how it would ride a little more slack.

Hopefully the tests are negative and you're healthy!!

marymoncorge Plus (Sep 22, 2020 at 10:25)
@nagaredama: thanks. Fingers crossed. My students are teenagers, so they are little plague pits

madmon (Sep 22, 2020 at 13:14)
Magic Mary and Rock Razor was my 26" combo on my Mojo and my Nomad for 5 years. I love that pairing I used them for my jamaica tours they worked well. Now Im on Ardent or Racing Ralph rear and Magic Mary/Minion fronts.

mtb-journal (Sep 23, 2020 at 2:36)
I am surprised you can run XRC wheels on these rocks/in these downhills. I would love to try such a light wheel set once but I am sure they would brake unter my 85 kilo immediately.

marymoncorge Plus (Sep 23, 2020 at 3:36)
I run the wheels with burlier tires than what they were meant to be run with (2.35 in snakeskin) and I added a tire insert and increased the usual pressure in the rear to protect it a little more. Same goes as the fork: I am pretty sure I could get away with it as I am lighter than most man and I do not smash through stuff but I definitely pushed through the limits of what it was originally designed for

madmon (Sep 22, 2020 at 9:54)
great thread I do love the idea of the bike build and it is strikingly beautiful. Can you tell member about the shifters the pic looks like an old Shimano thumb shifter

dldewar (Sep 22, 2020 at 12:13)
Not sure about the bag/spare tube placement - I would have put it towards the seat tube on the top tube so it does not interfere with the bottle.

Foxy87 (Sep 22, 2020 at 13:22)
@marymoncorge interesting option for reartire. Do you have enough grip on the steep gravel climbs with a semi slick on the back?

marymoncorge Plus (Sep 22, 2020 at 23:25)
Works great for the area, just need to find the correct pressure for grip and not puncturing. I ride gravel year round to commute on G-One Allround and no problem

marymoncorge Plus (Sep 22, 2020 at 9:37)
Yea, as Matt said: tiny legs / long torso. I like a bike with a long reach but the seat tube height has always been a problem until I found a dropper post with the smallest stack height.

GlassGuy (Sep 22, 2020 at 9:12)
From the thumbnail image at first glance I thought the number plate was a cup holder...and I got excited

techride (Sep 23, 2020 at 15:41)
@mattwragg: I guess not, having only owned rockshox air suspension. The format of the article implies we're being told the quantity of tokens. As an outsider looking in, it looks as though someone were so picky they shaved off 5% of a token to hit the sweet spot.