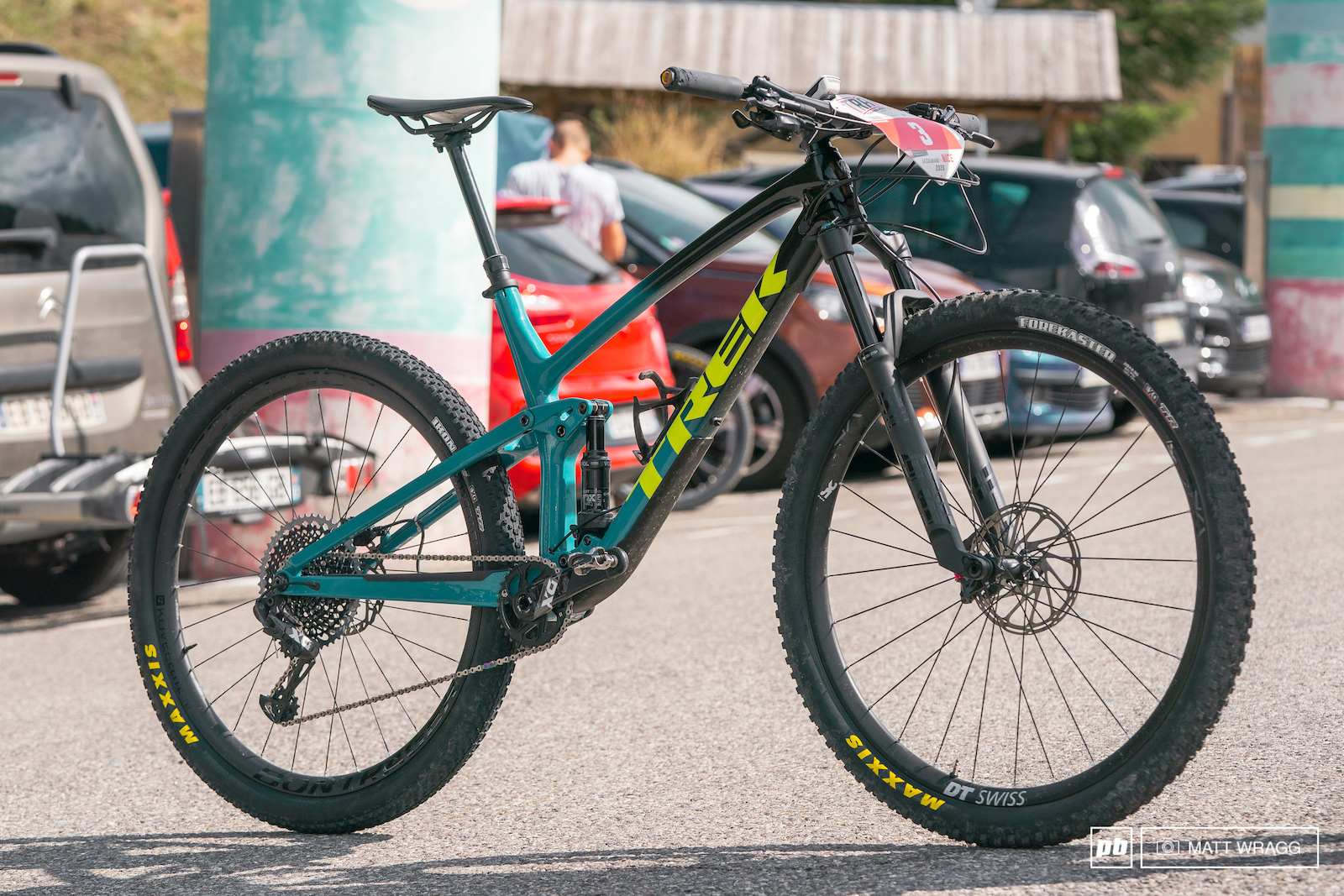 Maxime Folco's
Trek Top Fuel
Bike Check
If any one rider sums up the spirit of the Trans Vesubienne, it might just be Maxime Folco. A lifelong resident of the region, he grew up riding and racing on these kind of trails and 2020 marked his 9th time racing the Trans V.

Maxime isn't just here to make up the numbers, he has been second more times than he would like to count but has never managed to make that final step on the podium. For the last couple of years he had a small deal with Lapierre to race the e-MTB class, but for this year he is back on his regular mountain bike as with no sponsor commitments he prefers it to an e-MTB.

He admits that he has no interest in chasing sponsors again and doesn't like social media - he just wants to ride his bike fast. It's very much a blue collar affair, there is no factory suspension or electronic wizardry aboard his bike - just a mix of parts he had already and OE gear. This year he was pushed down to fourth as he admits he has struggled to train properly since being locked down in New Zealand earlier this year (he was working there when the pandemic hit). 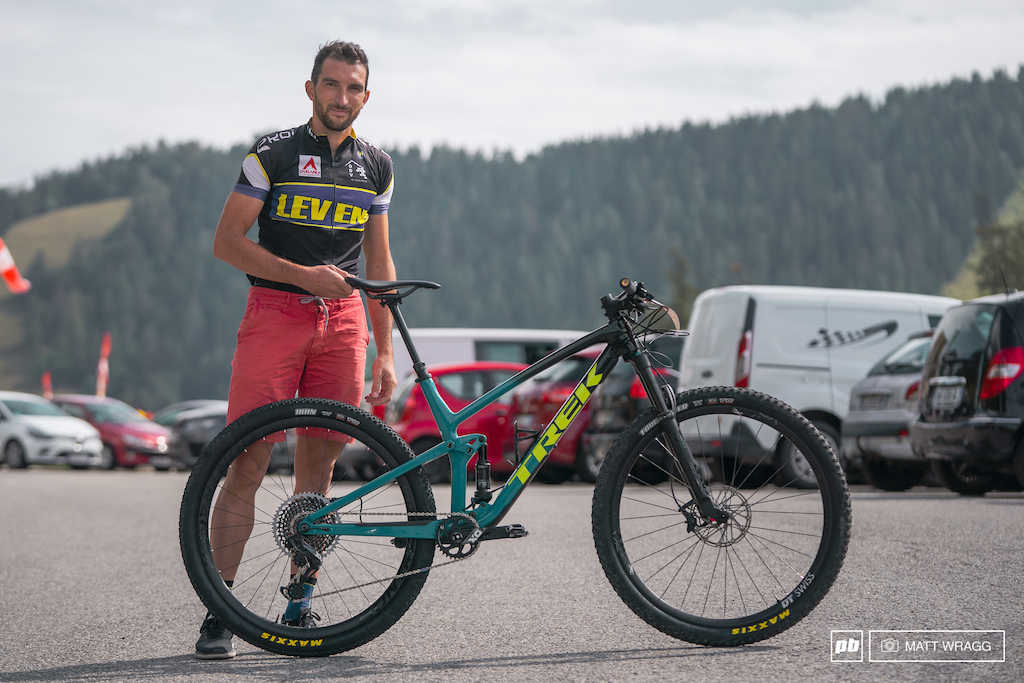 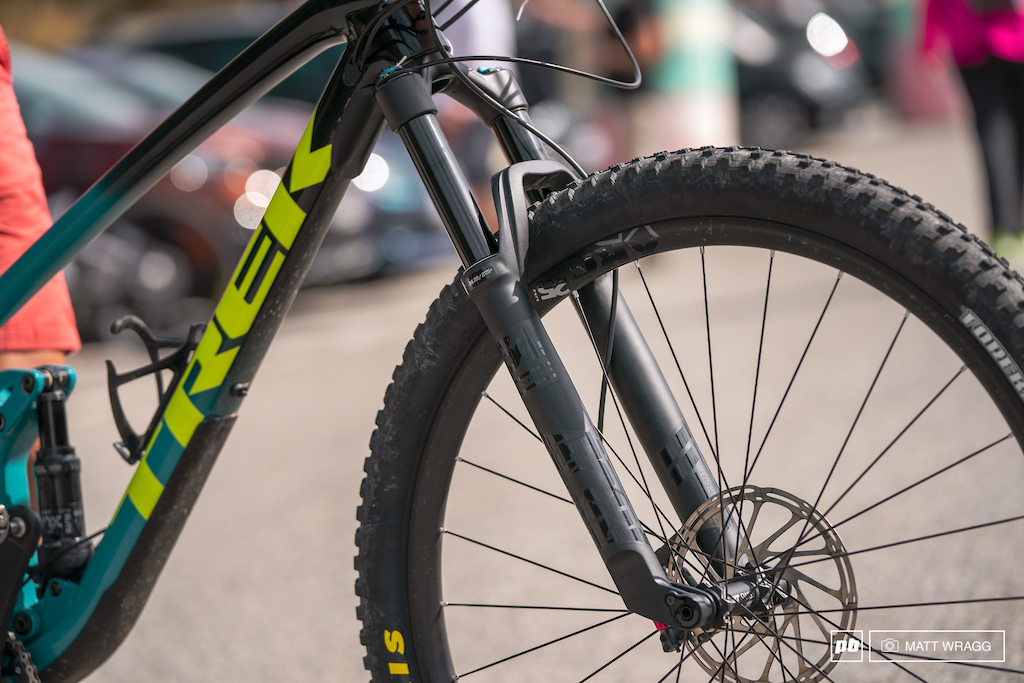 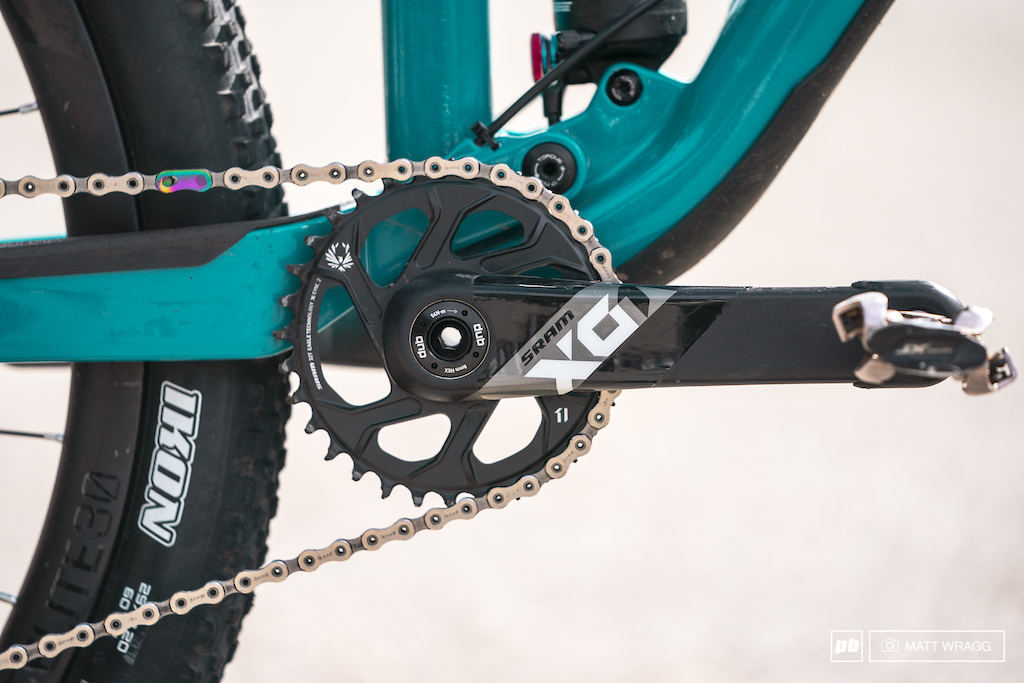 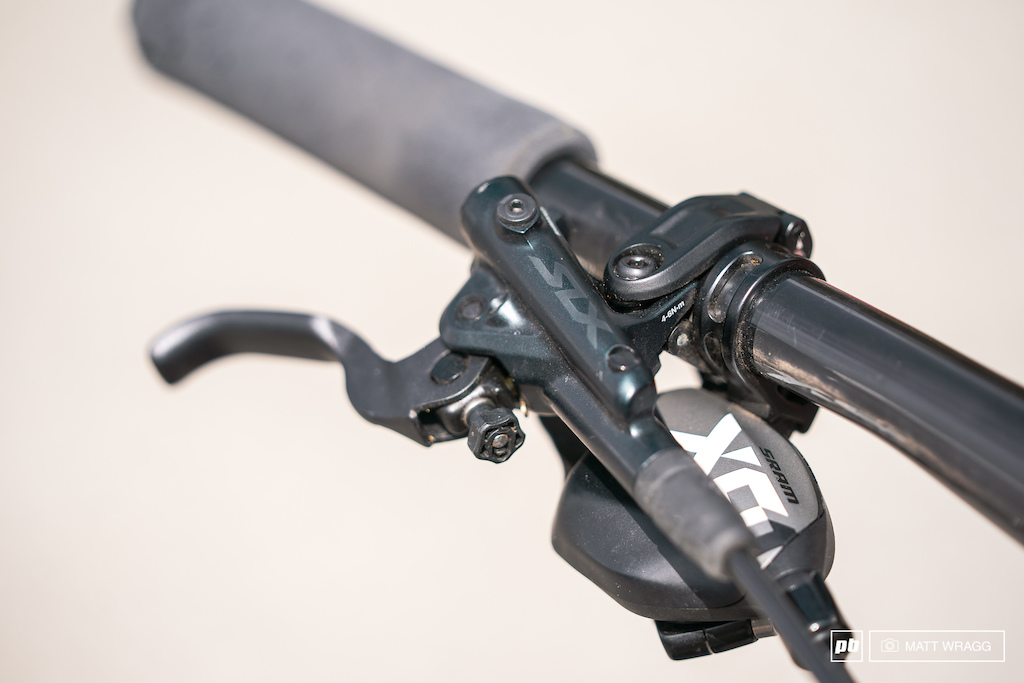 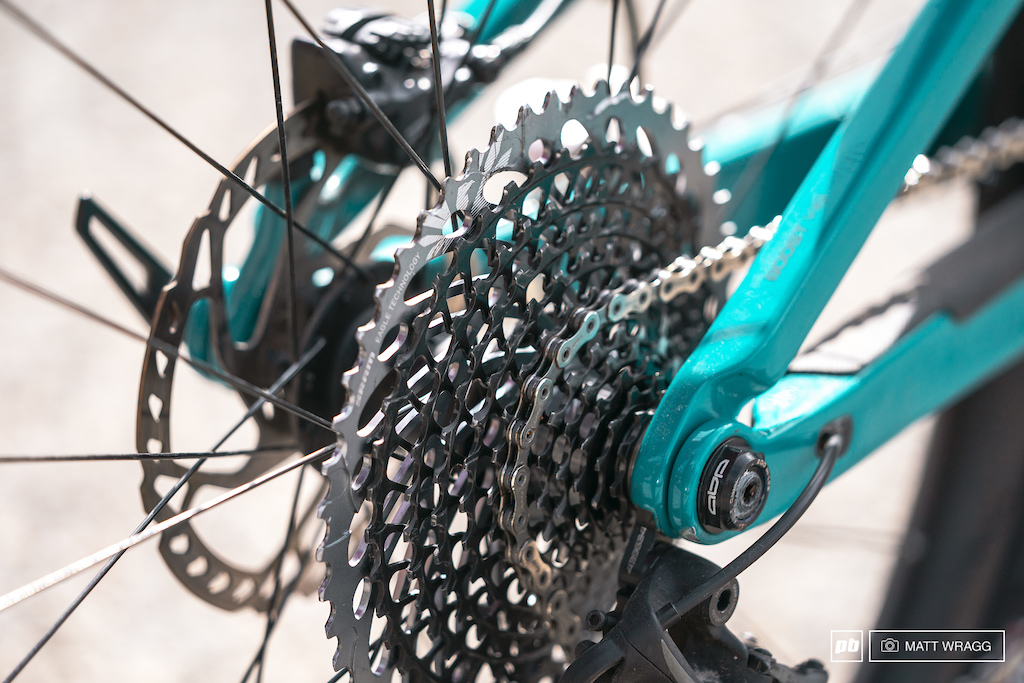 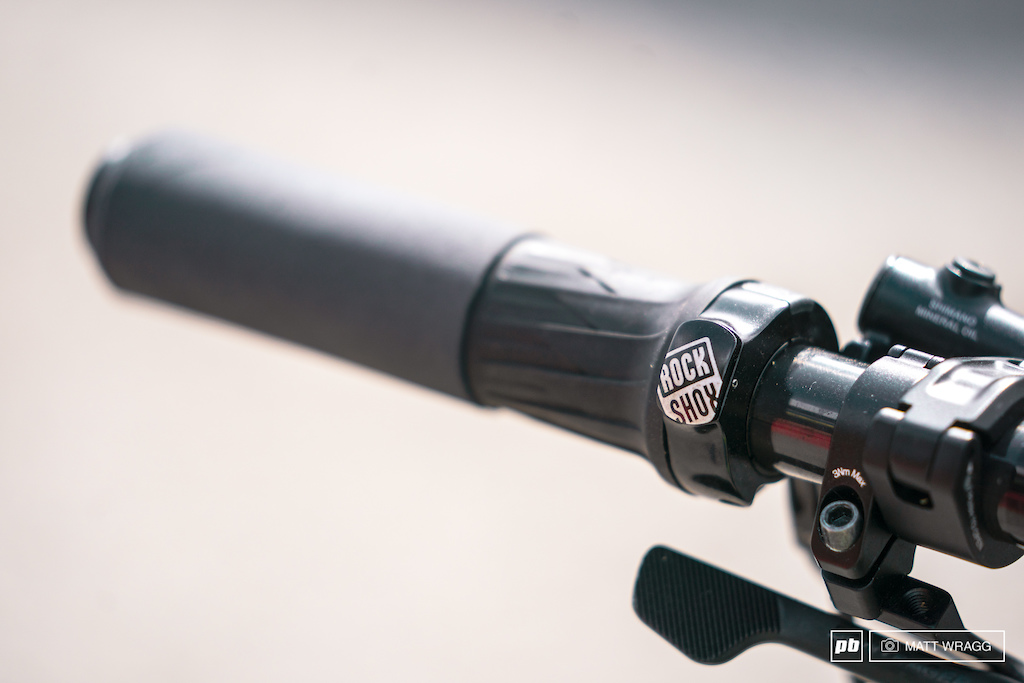 The SRAM GX Eagle groupset that the bike arrived with was switched out for a lighter X01 version - including the 10-50t cassette, which is a fairly significant weight saving, while the SLX brakes just worked so he didn't feel the need to change them. The Fox suspension is paired to a RockShox twist shifter to actuate the lockouts - both front and rear are paired together at the shifter. 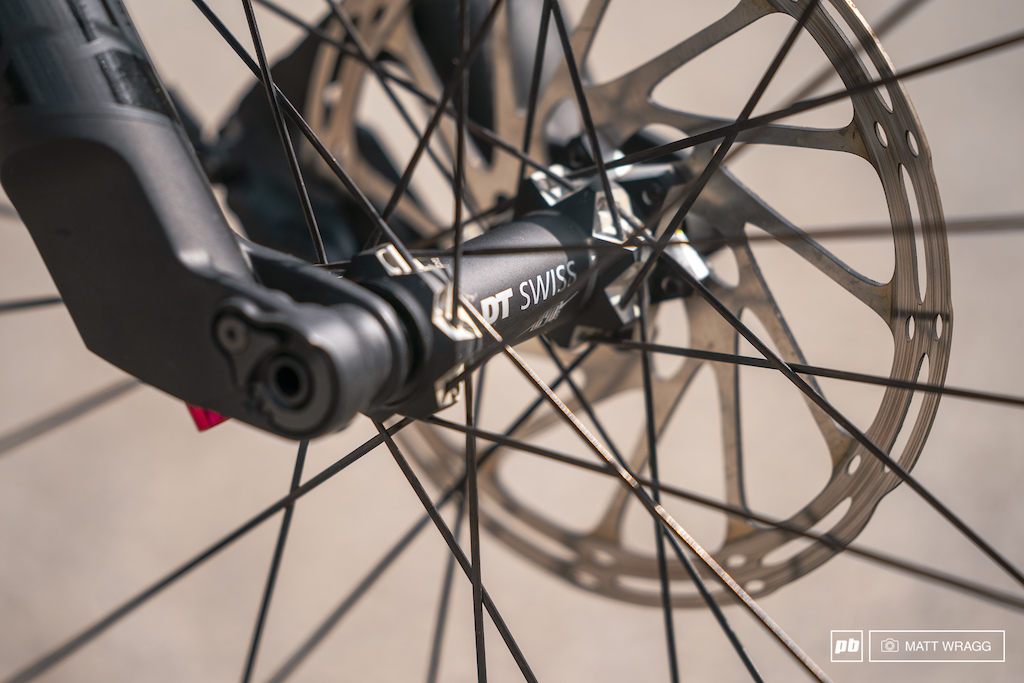 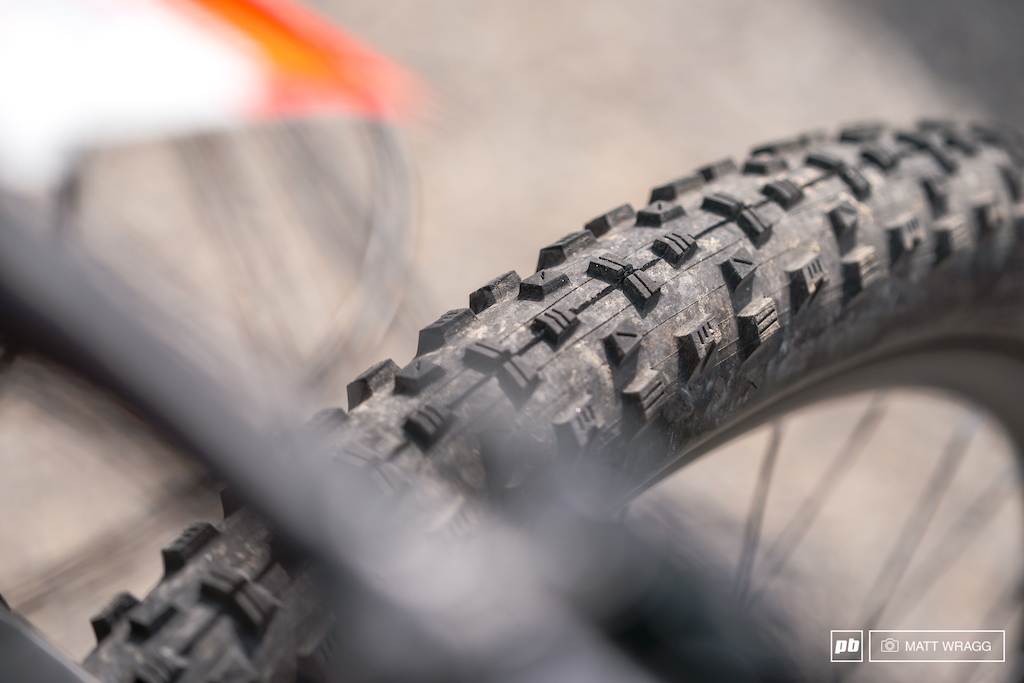 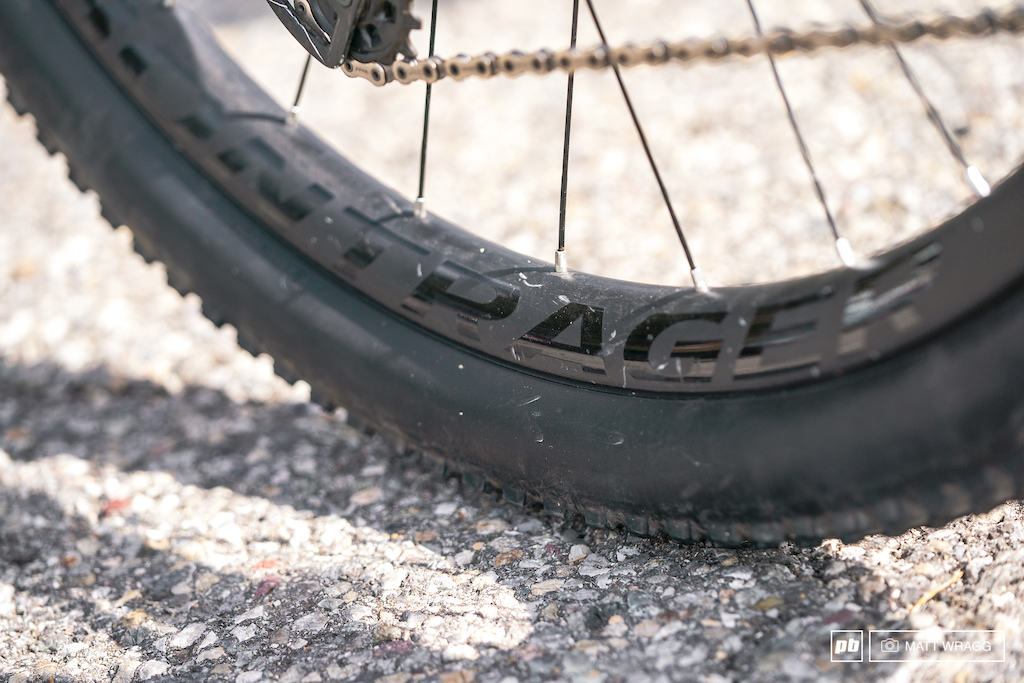 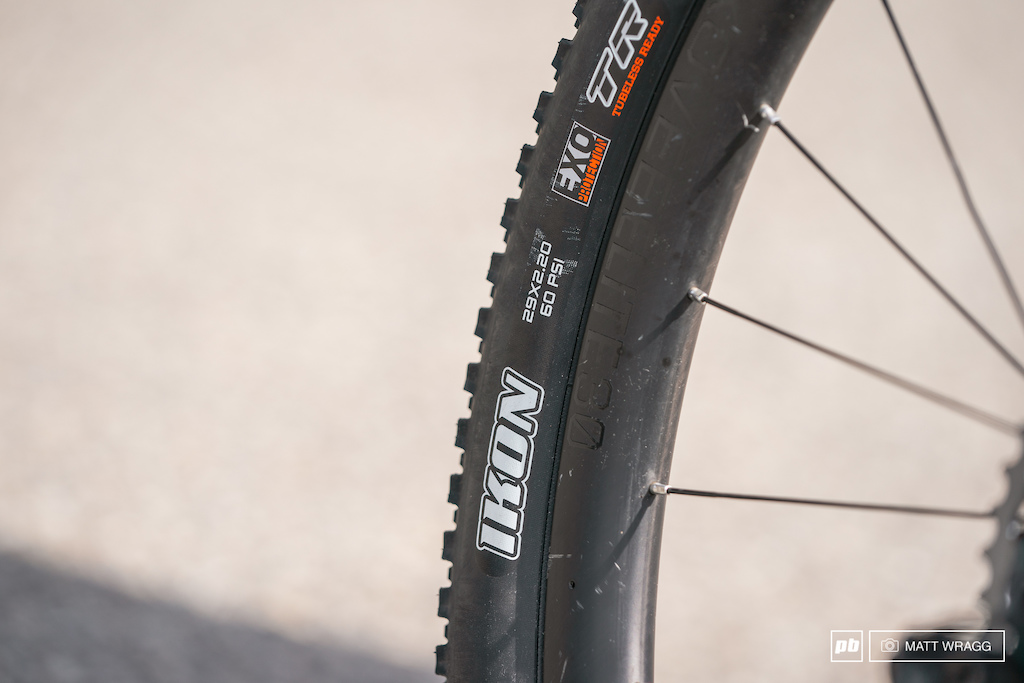 The wheels are a bit of a mix and match affair - on the front he is running his DT Swiss XRC 1200 from last year in 25 inner width, while at the back he has the Bontrager OE carbon wheel, although he also has his XRC 1200 with a slightly burlier tyre for the rear in the prologue as there is not too much climbing in it and he doesn't want to have to mess about changing tyres in the evening. He says he prefers the profile of the 30mm rim, it gives better comfort and puncture protection, but the OE wheels are heavier, hence keeping the front wheel. Inside the tyres there is nothing special, just standard sealant and no inserts, on race day he relies on sensible pressures to keep him rolling. They are shod with a Maxxis Forekaster on the front and a fast-rolling Ikon on the rear for race day. 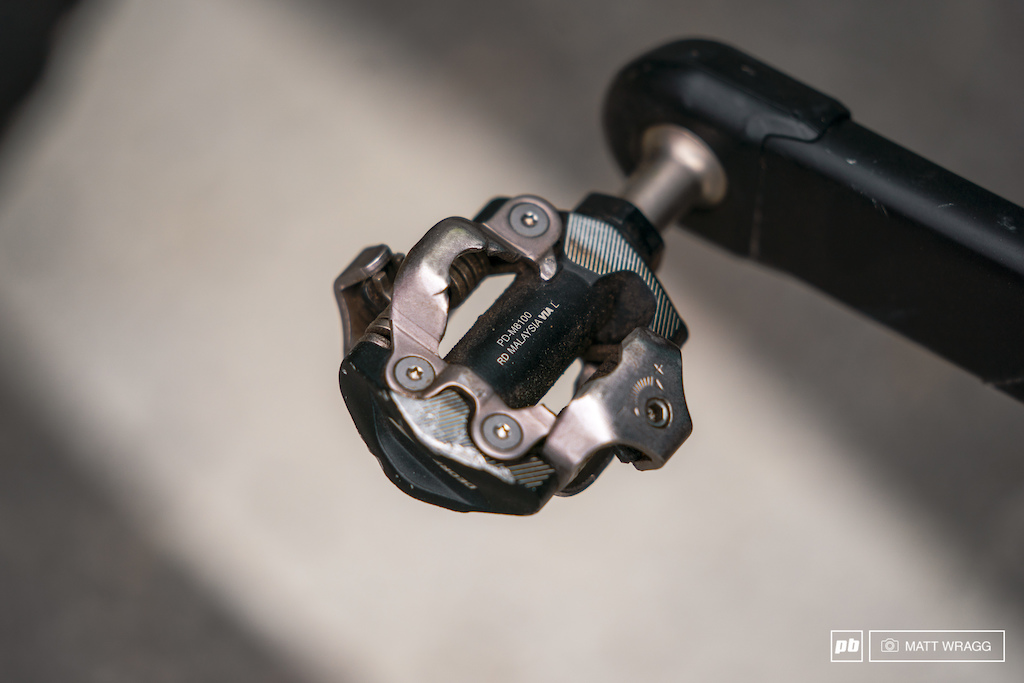 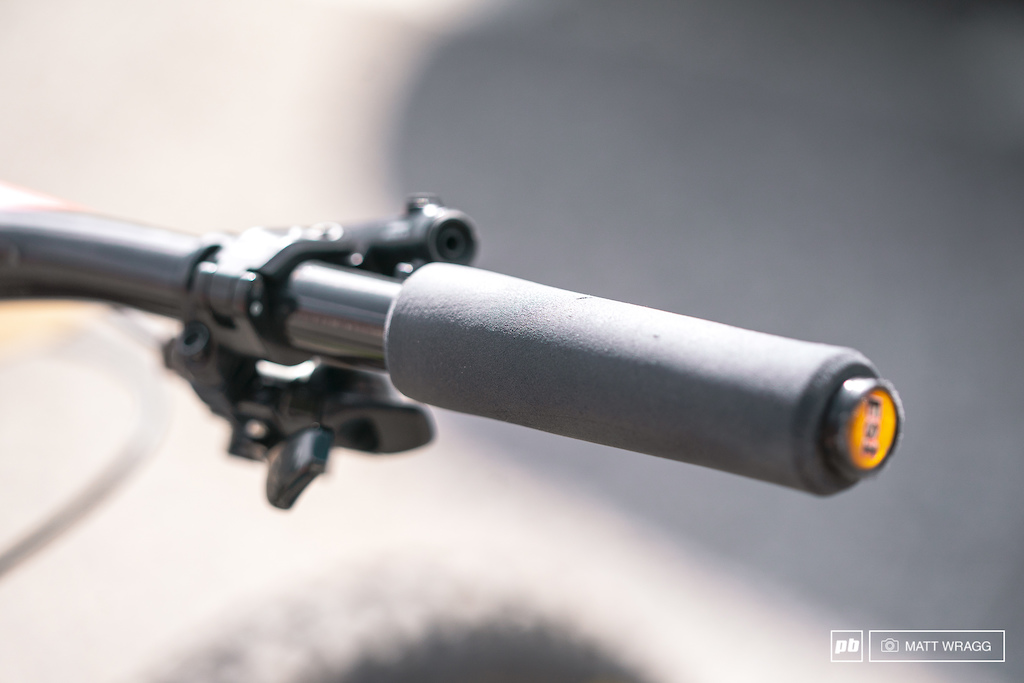 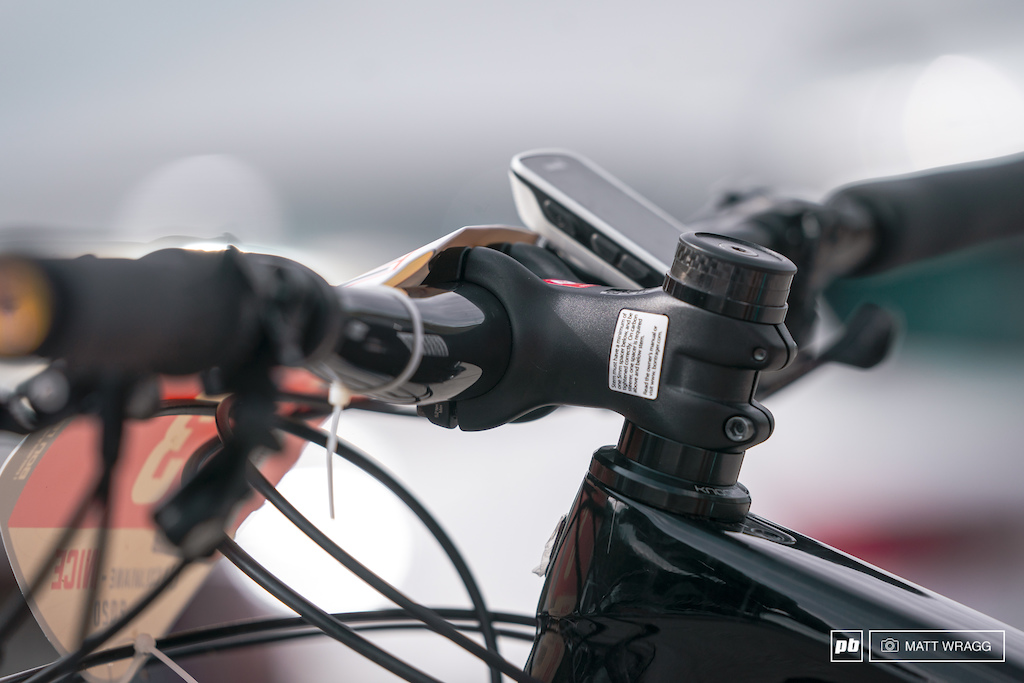 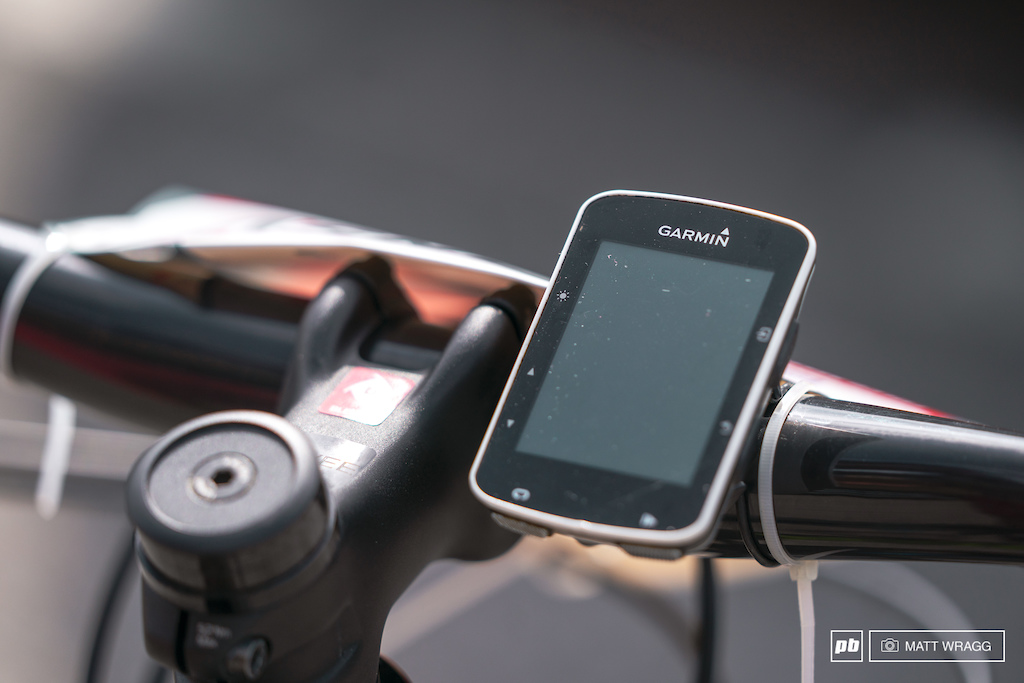 What is there to say about Shimano's XT pedals? Solid, reliable. The cockpit is the OE Bontrager carbon bar and 60mm stem that came stock with the bike, just with the stem flipped upside down to get weight on the front for climbing. ESI's foam grips are light, comfortable and cheap - ideal for a blue collar build. Maxime likes to have his Garmin in front of him when racing - he likes to have the climbing metres showing so can gauge how far into the race he is and how much harder he can push if he needs to.

Tweet
Must Read This Week
The SwitchGrade Will Allow Riders to Change Their Saddle Angle on the Fly
60660 views
Pinkbike Poll: How Important Are Water Bottles?
54622 views
The 20 Top Pinkbike Comments of 2020
52513 views
Throwback Thursday: The 12 Best Saves of 2020
51543 views
Colorado-Based Myth Cycles Releases the Zodiac: A US Made Steel, Single-Pivot, Full Suspension 29er
49748 views
Opinion: How True is the 'Dudes Who Shred' vs 'YouTubers' Meme?
45244 views
[Updated] Remy Morton Injures Both Of His Arms in Crash on Dream Track
44067 views
Check Out: Carbon Tire Levers, Flat Pedal Shoes, New Mini-Tools, & More
43905 views

BenTheSwabian (Sep 22, 2020 at 12:09)
"He admits that he has no interest in chasing sponsors again and doesn't like social media - he just wants to ride his bike fast."

That's a stand-up guy right there.

Jbq (Sep 22, 2020 at 14:51) (Below Threshold)
Not really,
it was said that he prefers to ride a mountainbike as a privateer. I´m sure riding e-bikes as a privateer is a lot more cost intense and complex on the tech side.

noplacelikeloam (Sep 22, 2020 at 12:19)
Shimano XTR product managers in shock as the world learns that SLX brakes and XT pedals are just fine for racing after all.

bman33 (Sep 22, 2020 at 13:29)
I can cook with average knives and do just fine. However, when I use professional chef quality knives, I can feel the difference and appreciate it. Does the job get done either way? Sure does.... However, having the nice kit is noticeable.

HairyLegs (Sep 23, 2020 at 1:05)
@bman33: or you can just learn to sharpen your everage quality knives properly and enjoy a sharp know while creating a fantastic meal

mrpfp (Sep 22, 2020 at 14:17)
It has a cable drivetrain and analog dropper. Everyone knows that’s peasant shxt. Dude probably has an Ozark Trail cooler too.

My bike was built just 1 month before this race, so not a lot of time for building a dreambike but just a suitable bike for the "transvesubienne" .
Of course the pressure on the back is about 185 Psi and not 105. I like low pressure in the fork 65-70 Psi not more.
Finally, with the bad weather during the night, I put a maxxis ardent on the back wheel.
At first I want use the Ikon because for the first year the end part of the race was very flat with gravel road and road on almost 20 km and I managed to ride as fast as possible. but I undesrtand that isn't the most suitable tire.

linds0r (Sep 22, 2020 at 14:42)
Are we sure all the pressure numbers are correct? Just wanting a little clarity for those of us running the same bike/setup.

Maybe he like his suspension super soft and his tires super hard?

makripper (Sep 22, 2020 at 16:32)
Not sure how pinkbike gets the conversions wrong every single time. It's pretty impressive actually

two-one (Sep 22, 2020 at 22:30)
The Transvesubienne is a brutal race, it's the only marathon i ever started that i couldn't finish. Most downhills are suitable for an enduro race, while the climbs and hike-a-bike sections are steep and unforgiving, and the weather always starts bearing down in you at that height in May...

Snowrydr01 (Sep 22, 2020 at 13:11)
slx brakes, regular exo casing rear, no inserts! I feel like there has got to be a bell curve graph somewhere with skill and parts durability requirements.

gherz (Sep 23, 2020 at 17:16)
Really like articles like this. I got to learn about a new race and it's really interesting to see what real people without sponsorships use. Good one!

optimumnotmaximum (Sep 24, 2020 at 1:56)
If you look at whats fastest up and down, probably yes, if you look at "fun" maybe but probably not. Yesterday i rode a bike with fast rolling tires (Vittoria Mezcal) for the first time in years. Man was i fast on my standardlap and man was i terrified as it started to rain.

How do your know if the pounds, kilos, or both are wrong?

twopoint6khz (Sep 22, 2020 at 13:06)
@hllclmbr: I can tell what he weighs by looking at him. My previous career was as a carnival weight-guesser

just6979 (Sep 22, 2020 at 13:34)
Mentioned he uses "sensible pressures". For a long race like this, sensible basically means enough to not destroy the tires in the next X days. Have to sacrifice some traction and comfort and little rolling resistance, but worth it to not have to boot a tire in the middle of nowhere. Sure, maybe could go lower with an insert to reduce the volume a bunch, but 26 isn't insane. It's not like he's running mid 30s as was the norm like 15 years ago.

optimumnotmaximum (Sep 23, 2020 at 7:21)
I would never race that ikon on such a race. Such an underdamped scetchy tire - and the best, it does not even roll that fast.

So did you put stickers on your bike and removed the branding on your car, as it would be "marketing"?