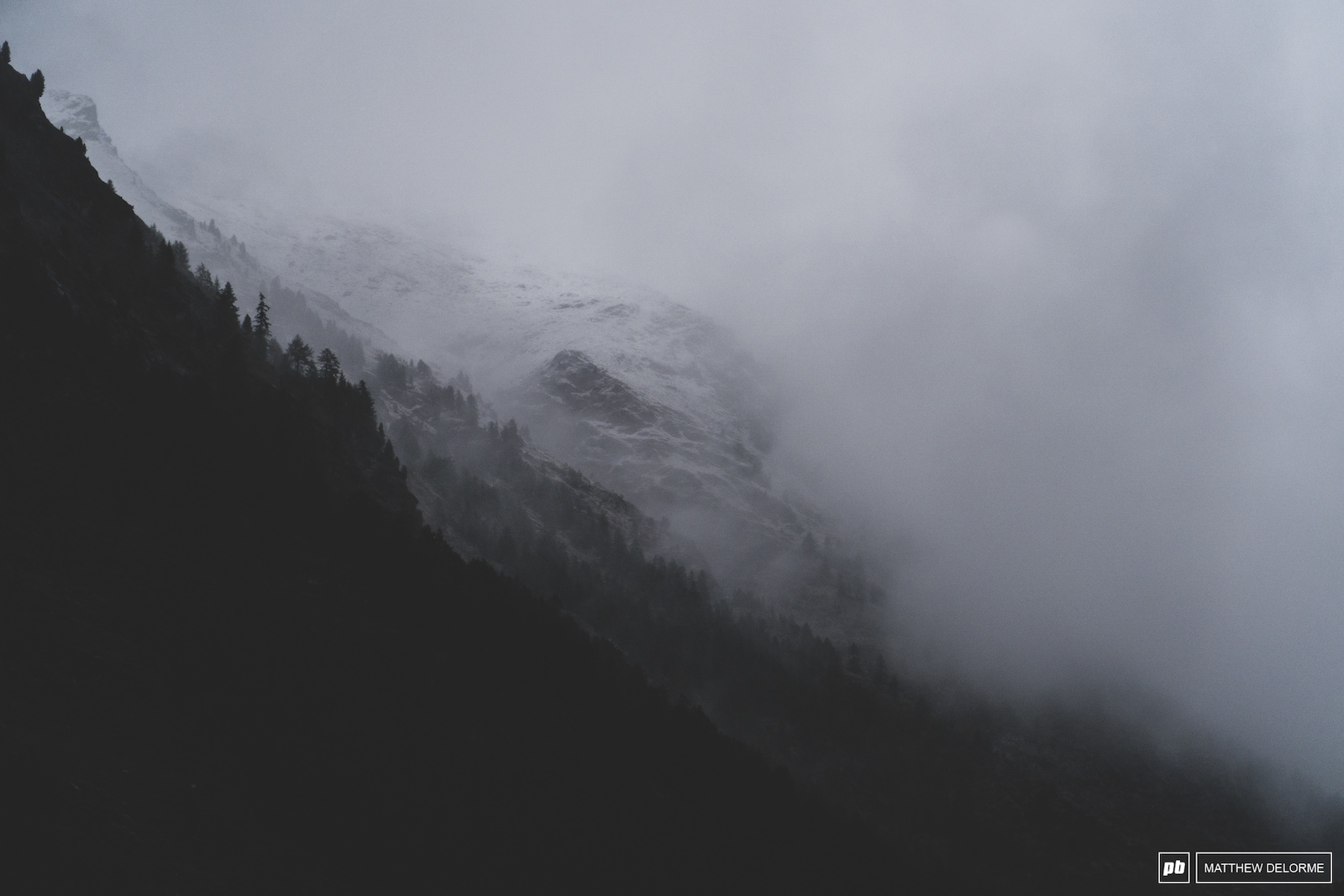 Photo Epic
Teetering On The Edge
EWS Round one, Zermatt, Switzerland
Photography by Matthew DeLorme
2020 must have an awfully large box of wrenches. For the EWS crew it has to feel like 2020 has thrown a never-ending supply of them into the works at every turn. Today was no different, yet once again, they moved forward and pulled off the first international MTB race of the season with grace and honor. The day started with heavy rain and thunder, and an incredibly low cloud ceiling, which meant no helicopter medic support. Then came the delays as they moved to sort things out. One hour, then near two hours. Stage three was cut, which left the second half of stage four as stage one, and stage two as the second and final stage of the day because the snow level had started to drop down to where it could easily be seen from the pits. Things definitely seemed to be teetering on the edge of unraveling. The updates from the EWS crew were coming in at a rapid pace. When it had been decided that the riders could safely race the green light was given by Chris Ball and the Trail Love Crew, the EWS got underway.

When riders reached the top of the funicular to liaise to stage one, the snow was coming down. Temps in the pits had been 5° C. Despite the heavy morning rain, stage one seemed to have significantly more grip than it did the day before. The conditions didn't make for the fast-paced racing we saw last year in Zermatt. It was more a game of stay smooth and keep the tires on the ground. At least until the flow trail. By the time we headed into stage two, the clouds were starting to break, and everyone was thankful it was no longer coming down in buckets

Jesse Melamed took the win on stage one and a third on stage two to come out on top for the day. Martin Maes took second, and Theo Galy took third for the men. Isabeau Courdurier once again proved utterly dominant with two stage wins, Morgane Charre took second, and Ella Conolly had a breakout ride to take third in the pro-women. It wasn't what everyone had in mind for the first big international MTB race of the season, but it was pulled off without major incident, and that is a huge win in these strange times. International MTB has a chance to move forward in the age of COVID, the EWS just did an incredible job in proving so. And now as we all dry out, we look forward to hopefully warmer and drier times in Finale, especially since most of the teams are headed directly there tomorrow. It's time to warm our bones. 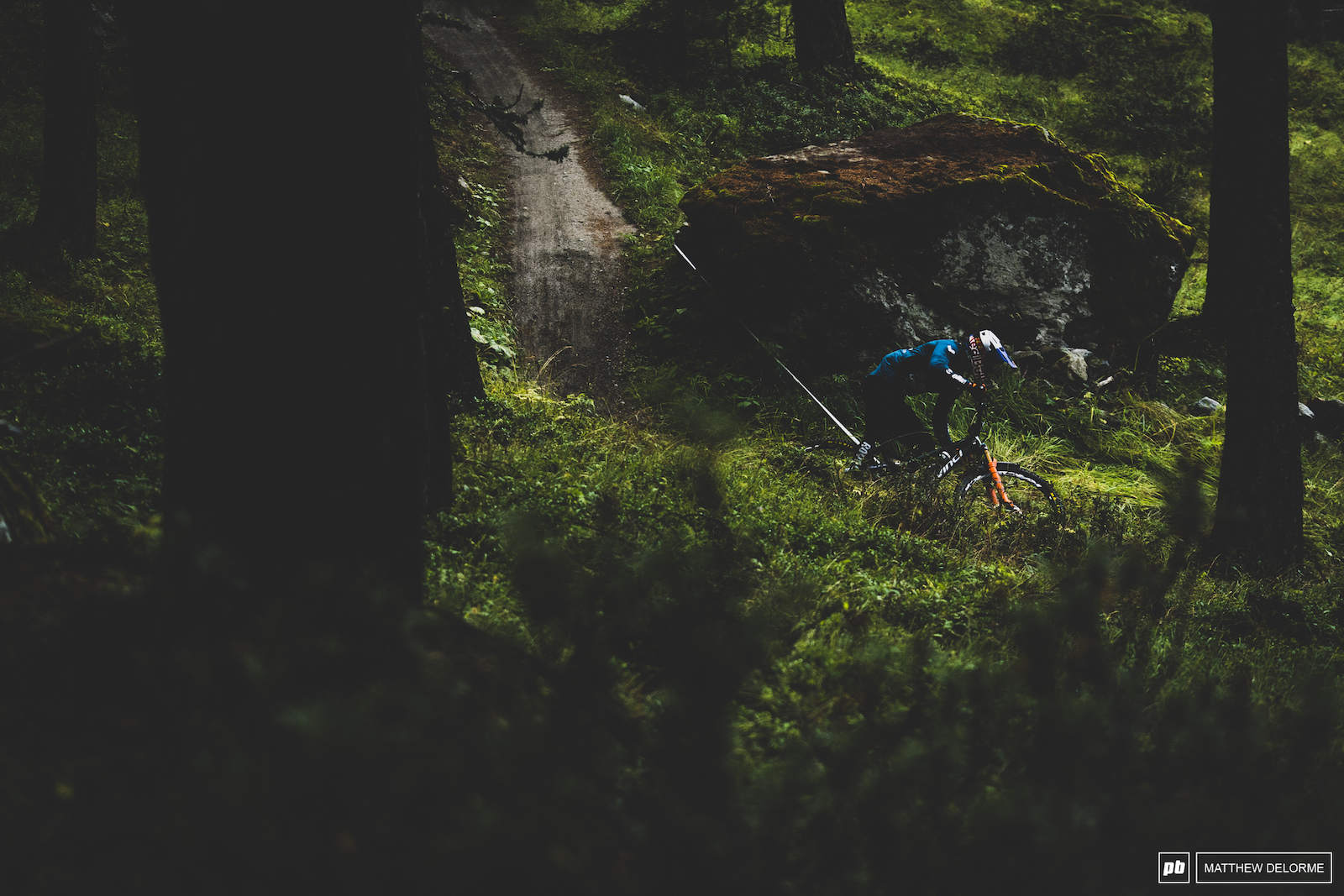 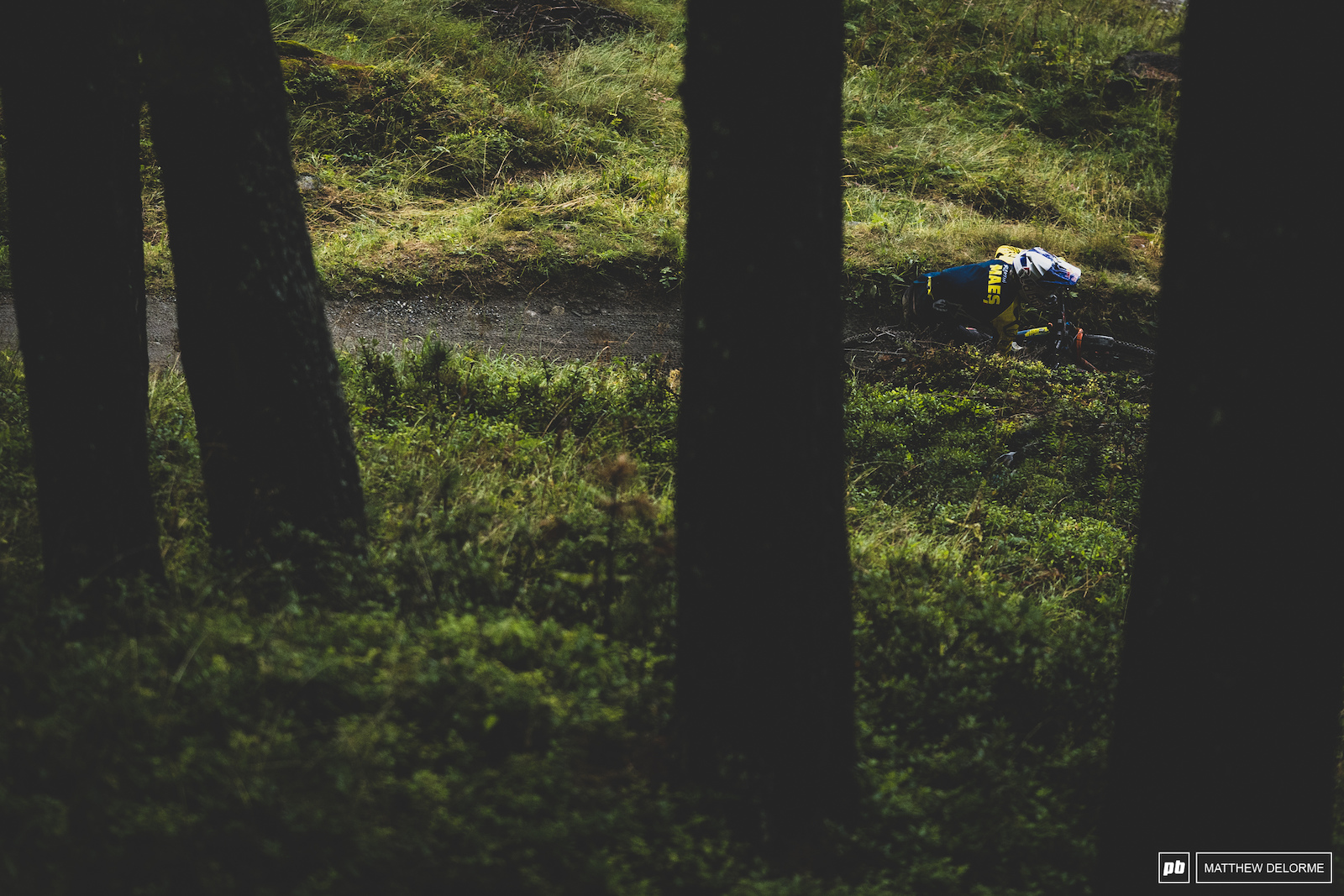 Martin Maes took fourth on stage one and first on stage two to take second for the day. 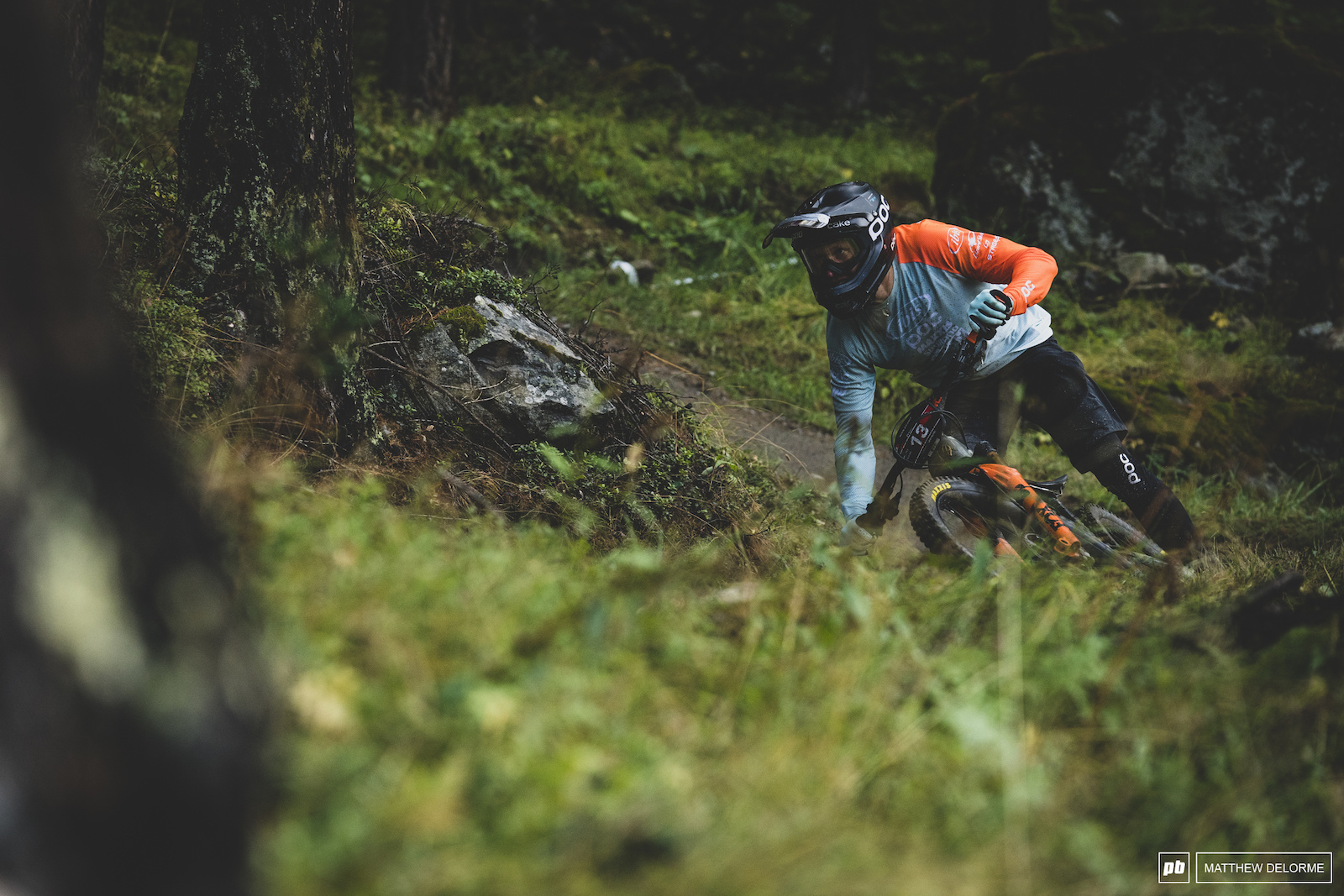 Robin Wallner took second on stage one and finished the day in sixth. 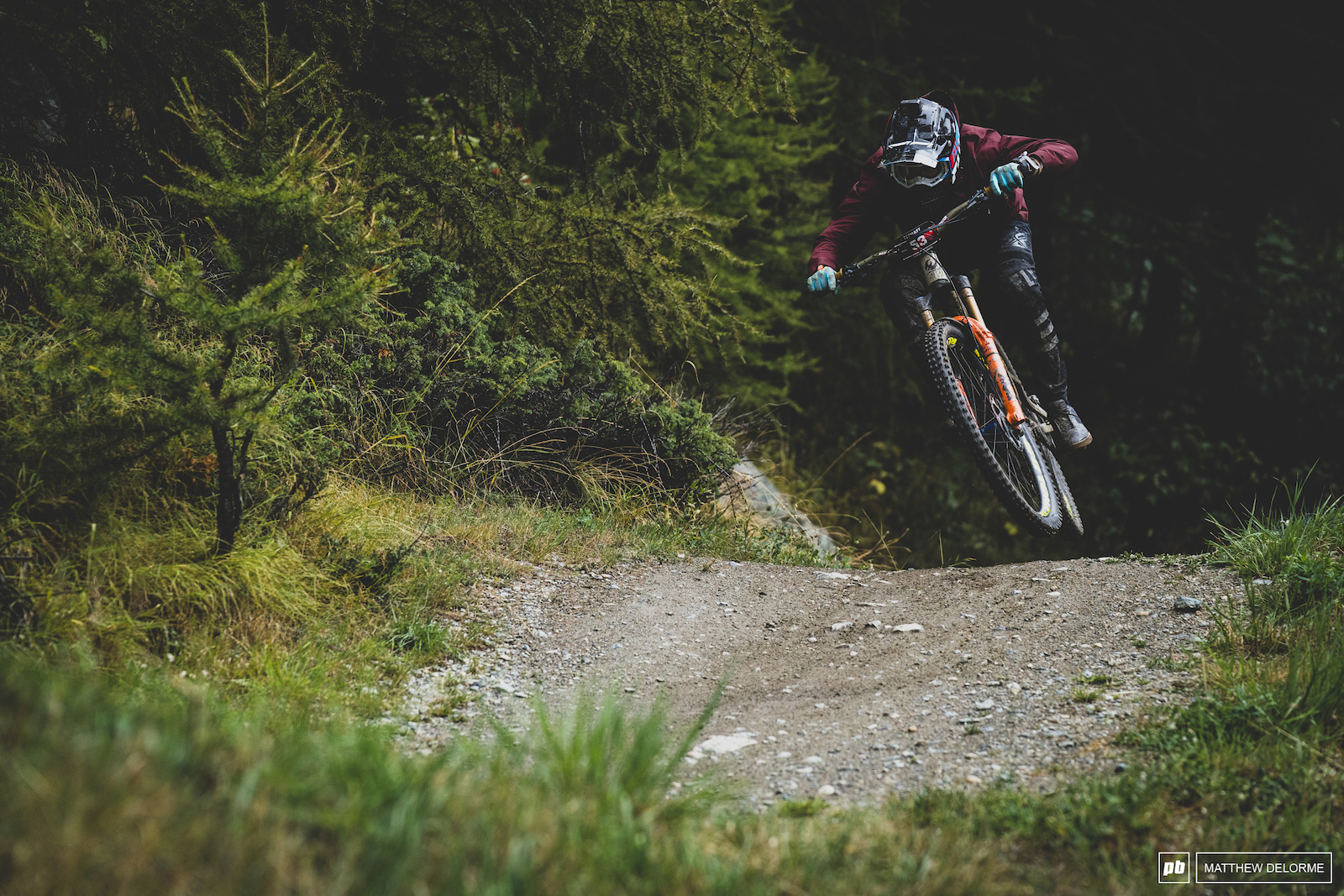 Bernard Kerr finished just inside the top 20 at 19th. 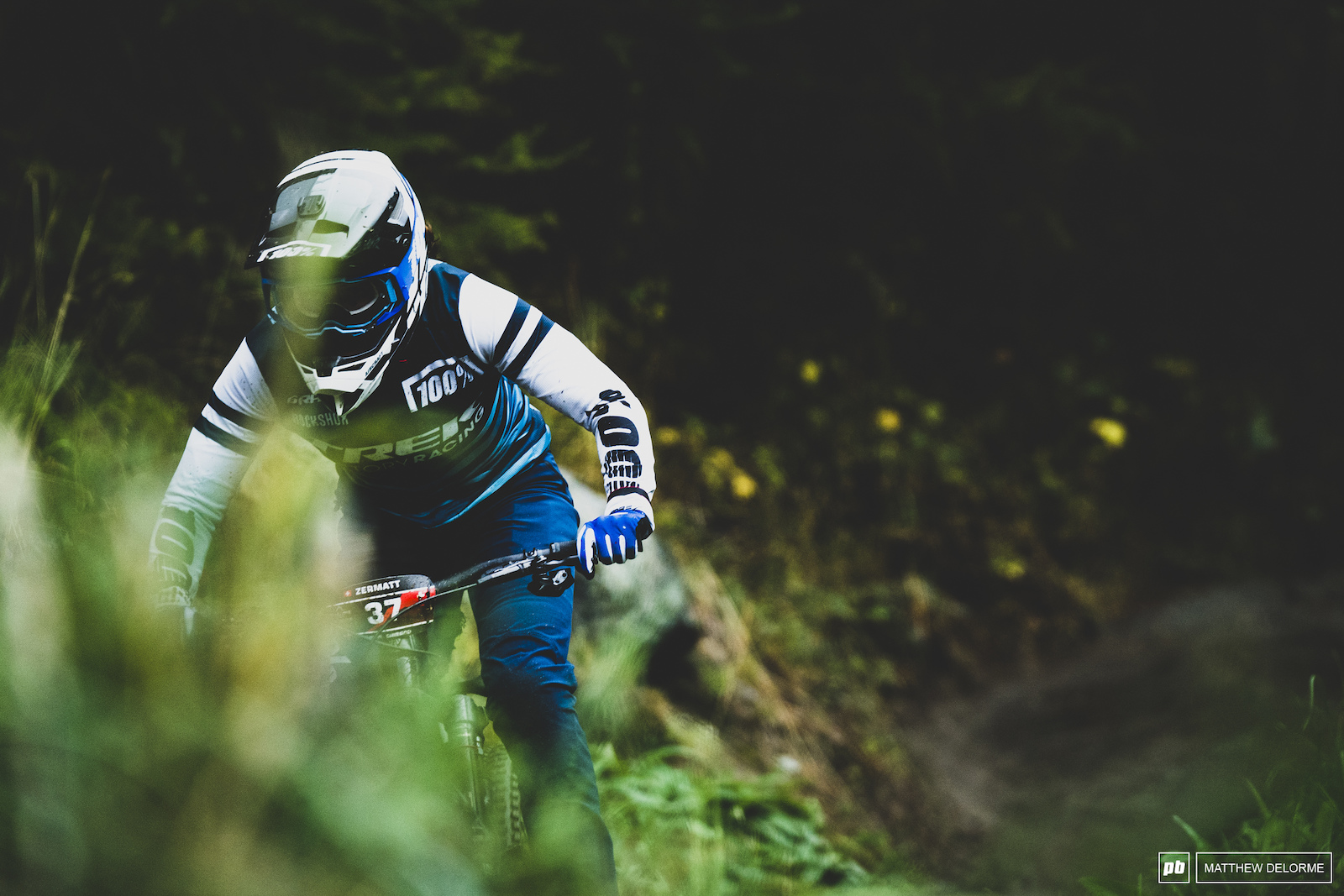 Katy Winton took fifth for the women and will be looking to get back on the podium in Finale. 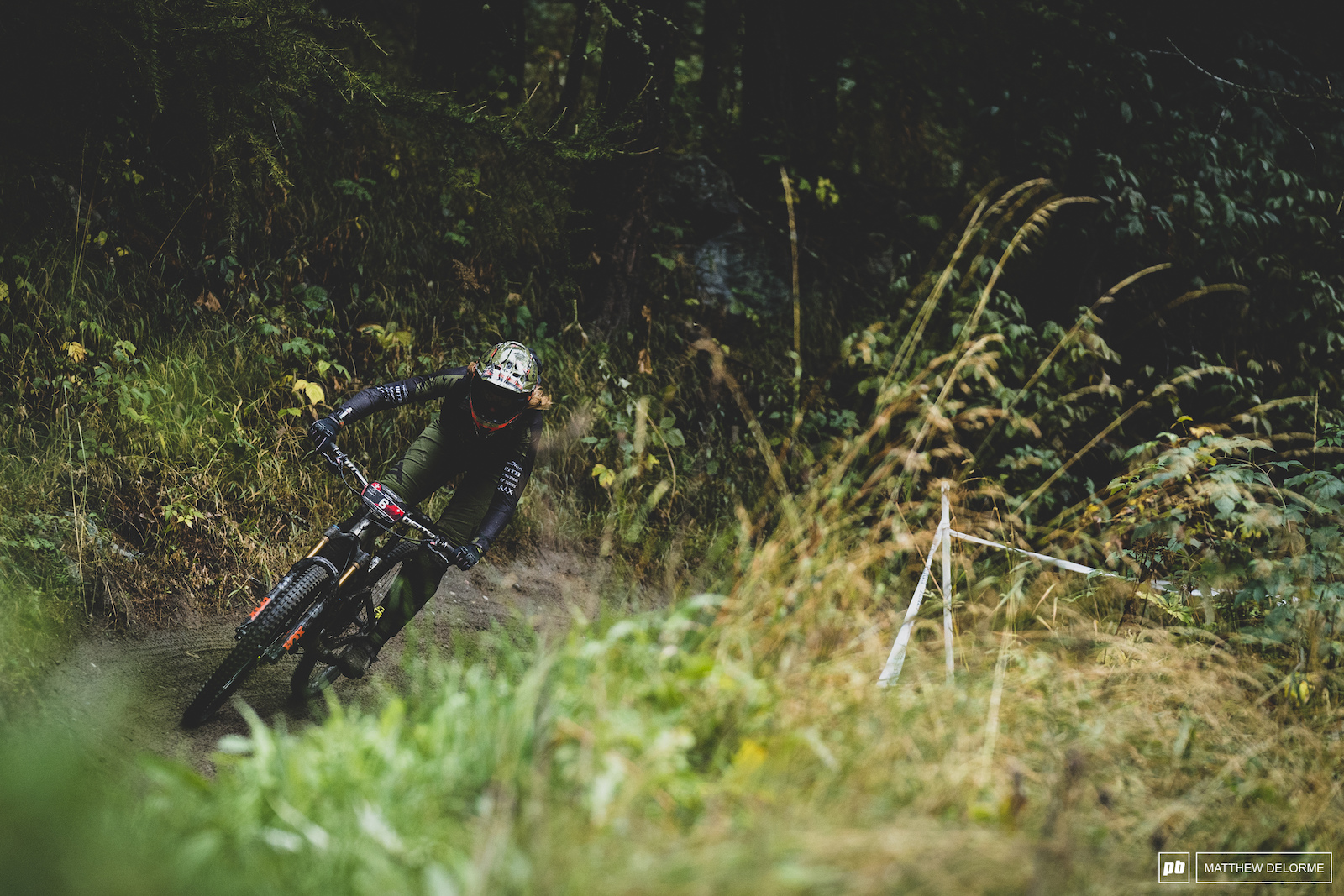 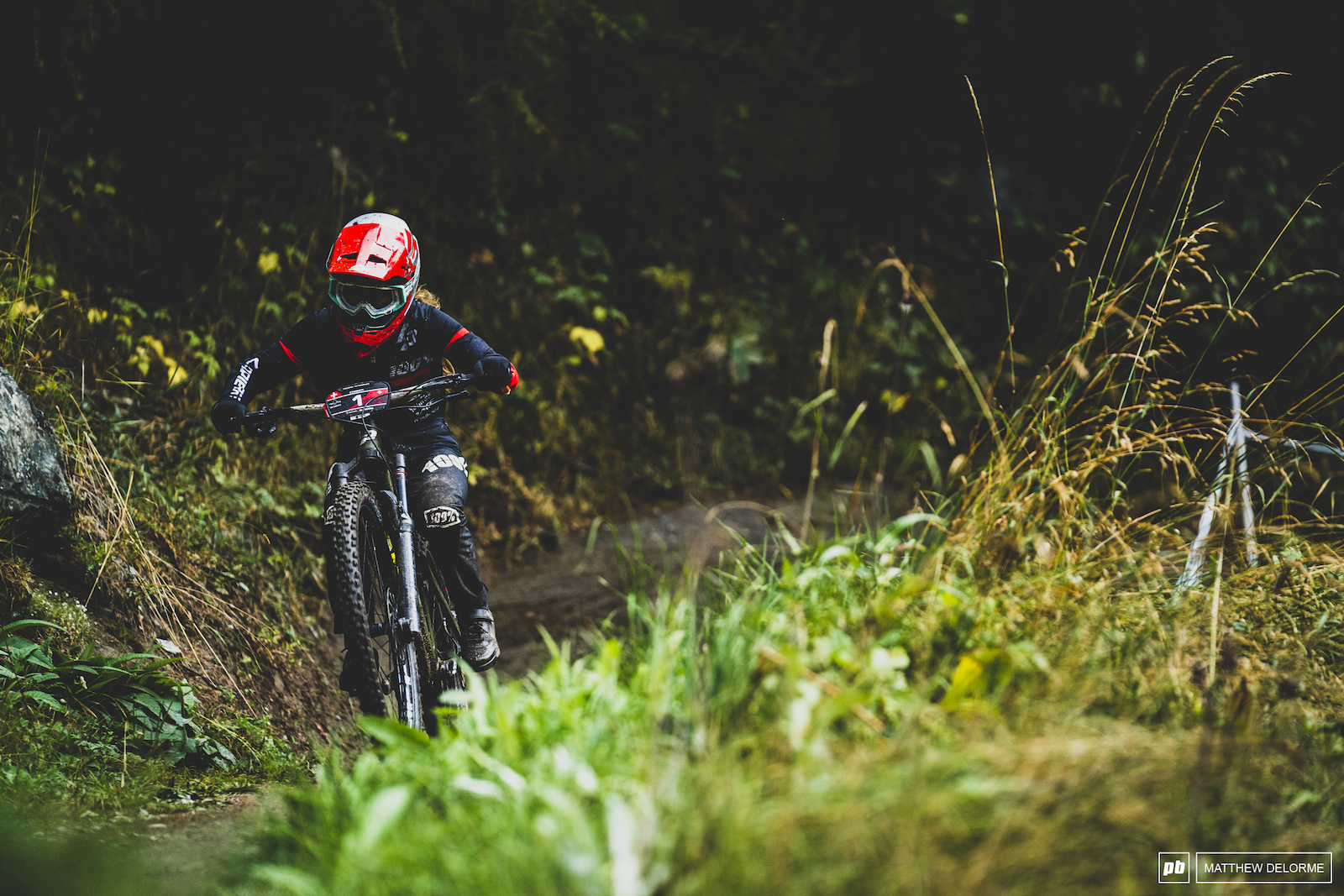 Isabeau took two stage wins and the win for the day. 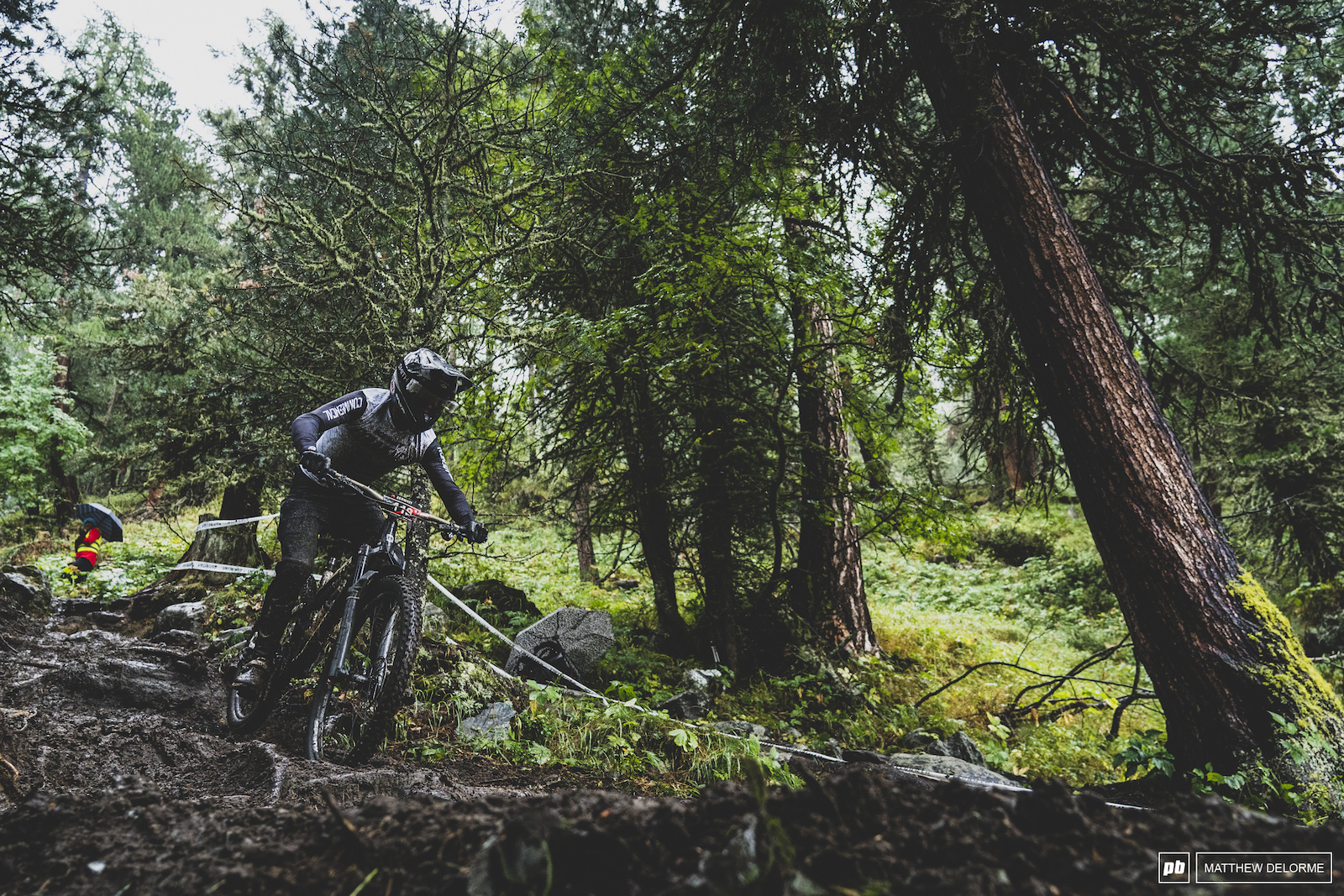 Antoine Vidal takes the win for U21 men. 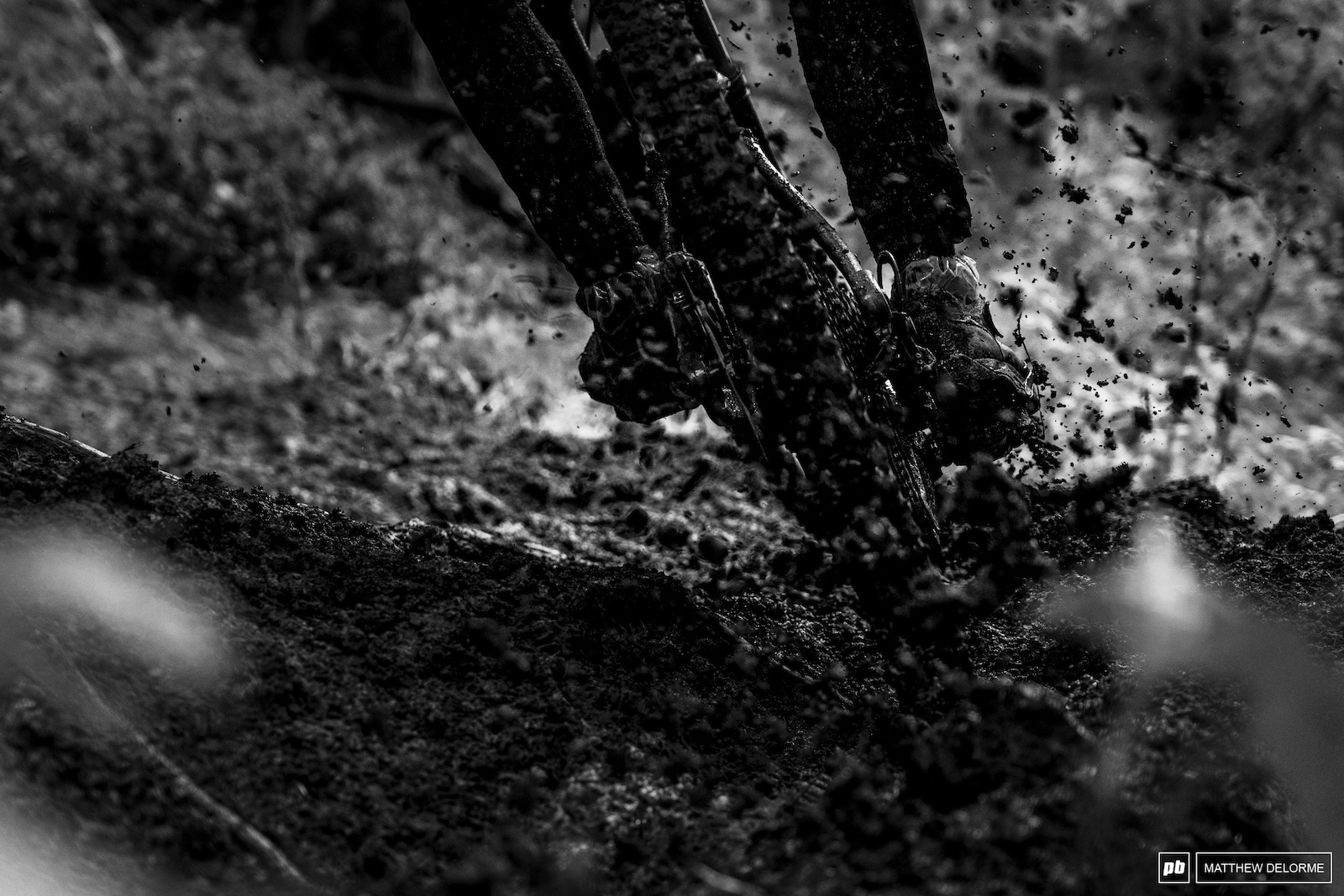 The mud was flying on lower stage one. 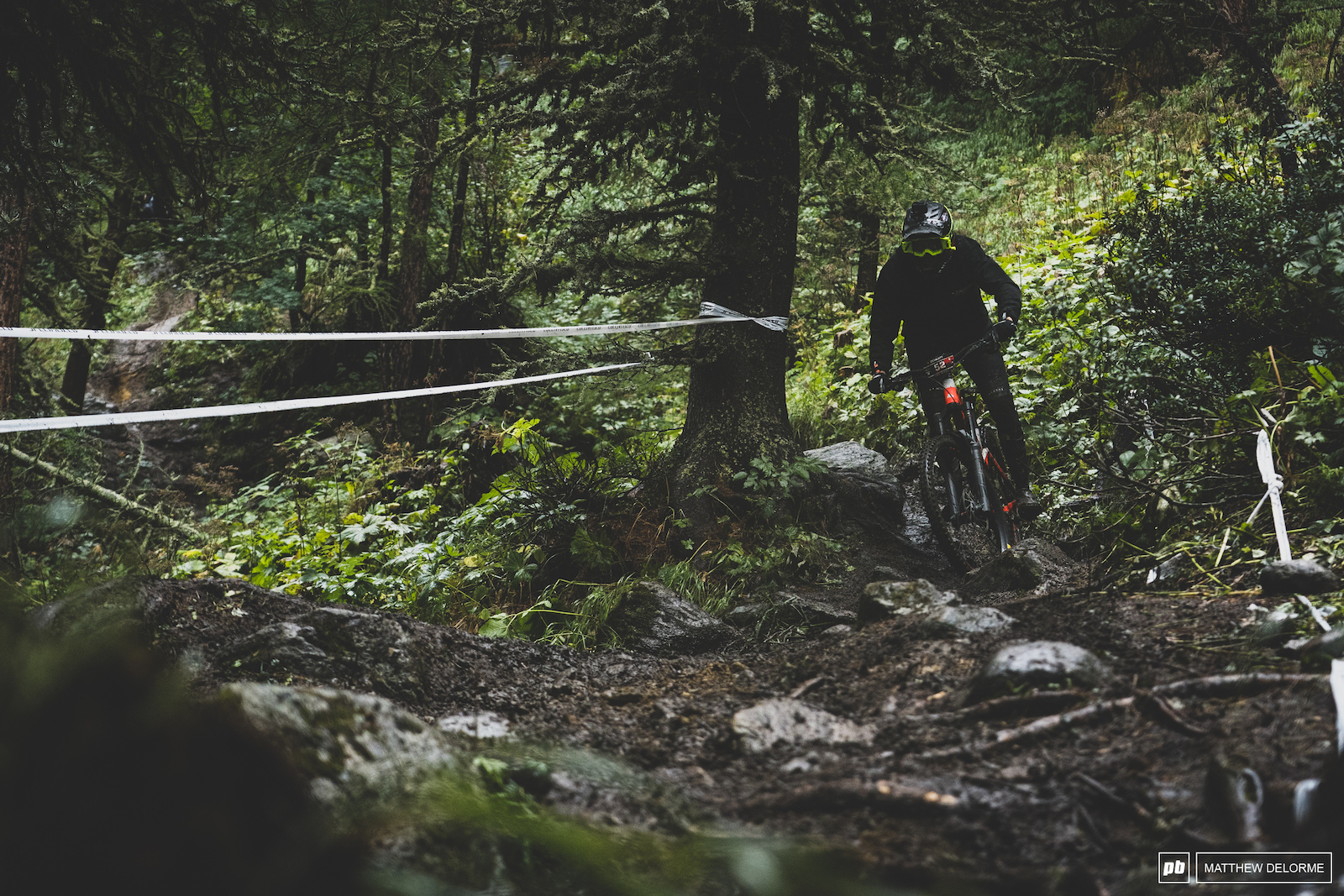 Jack Moir had a hell of a day and took fourth place with two fifth-place stage finishes. 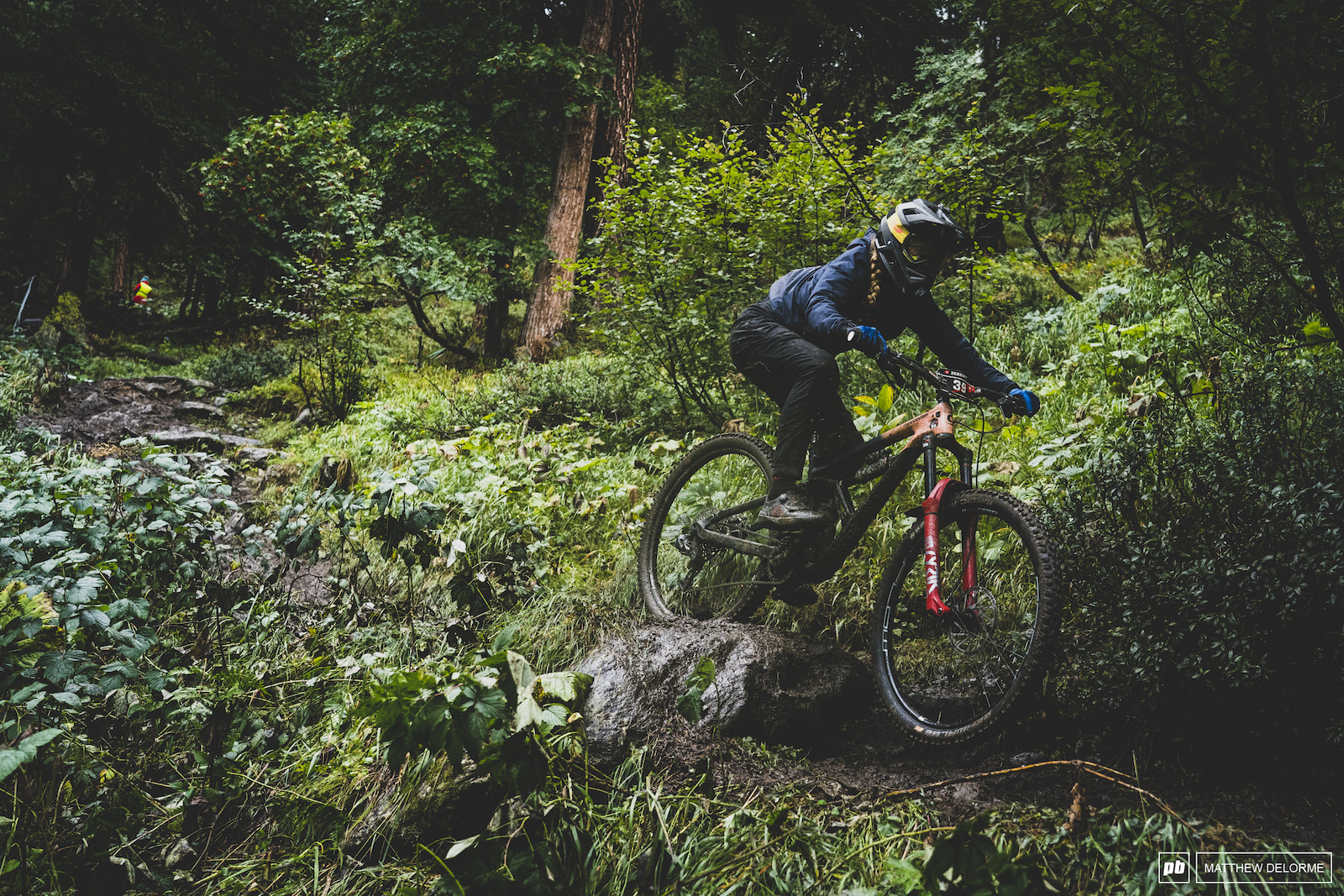 Ella Conolly on her way to third place in a breakout ride. 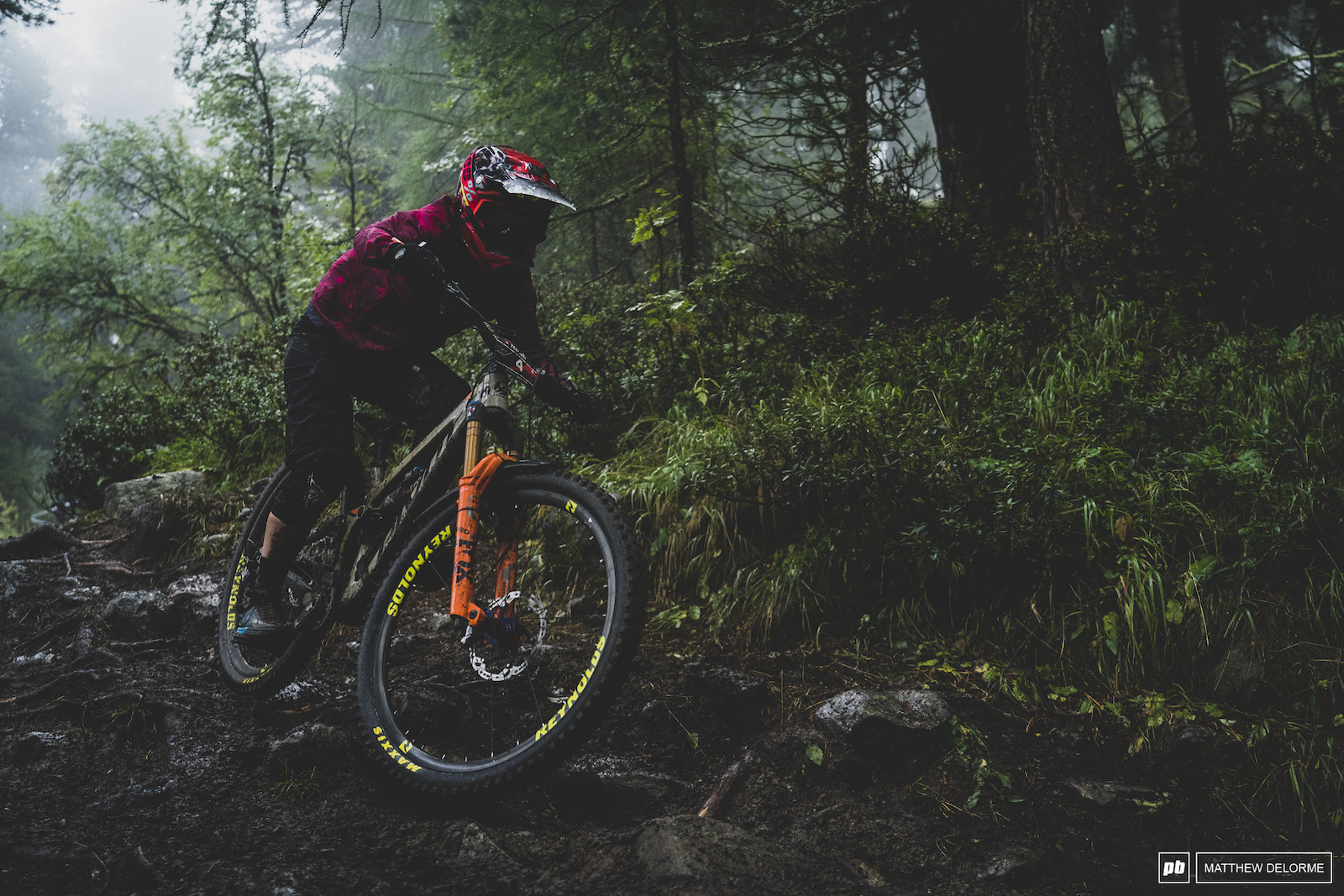 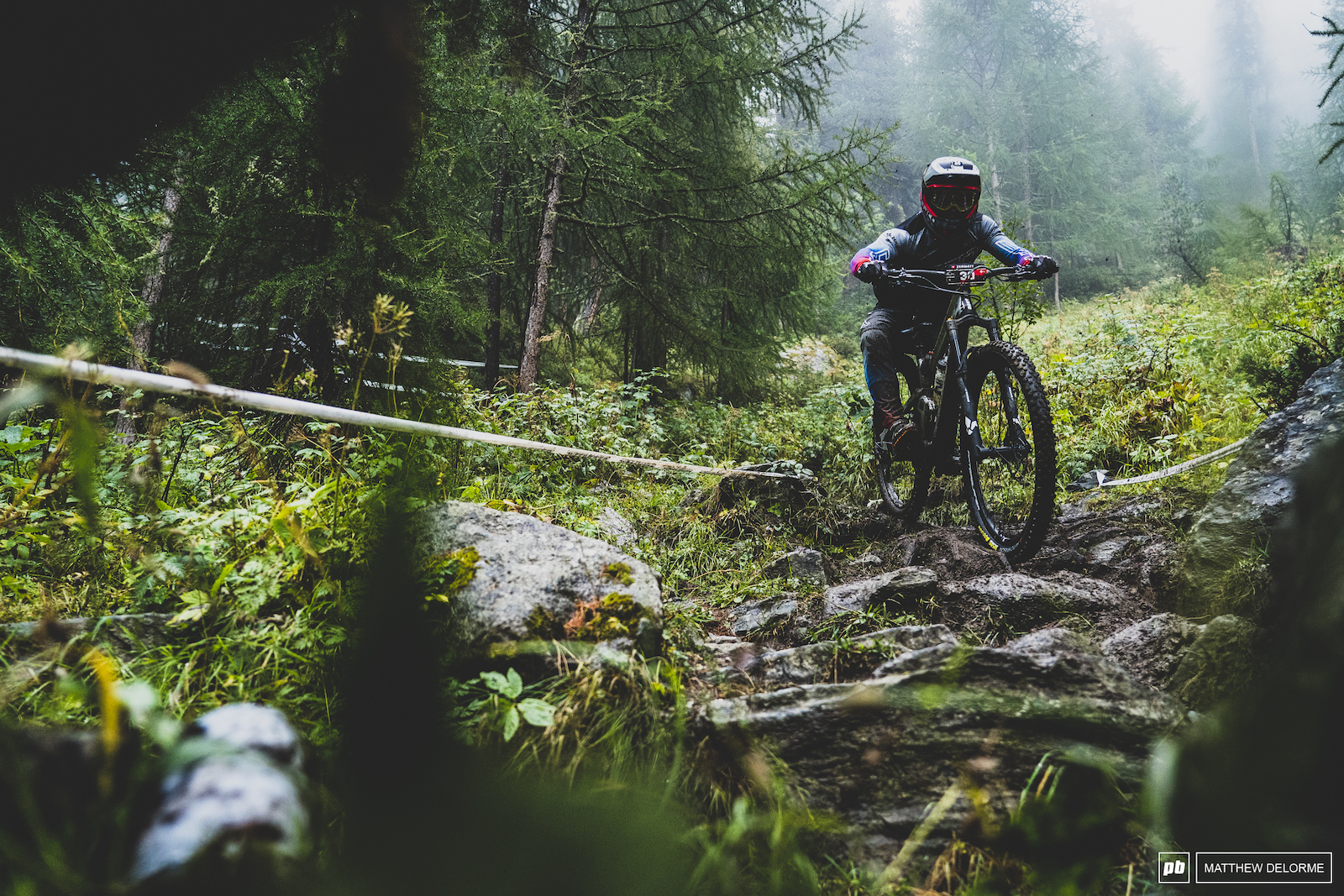 Theo Galy took seventh on stage one and second on stage two for a third-place finish. 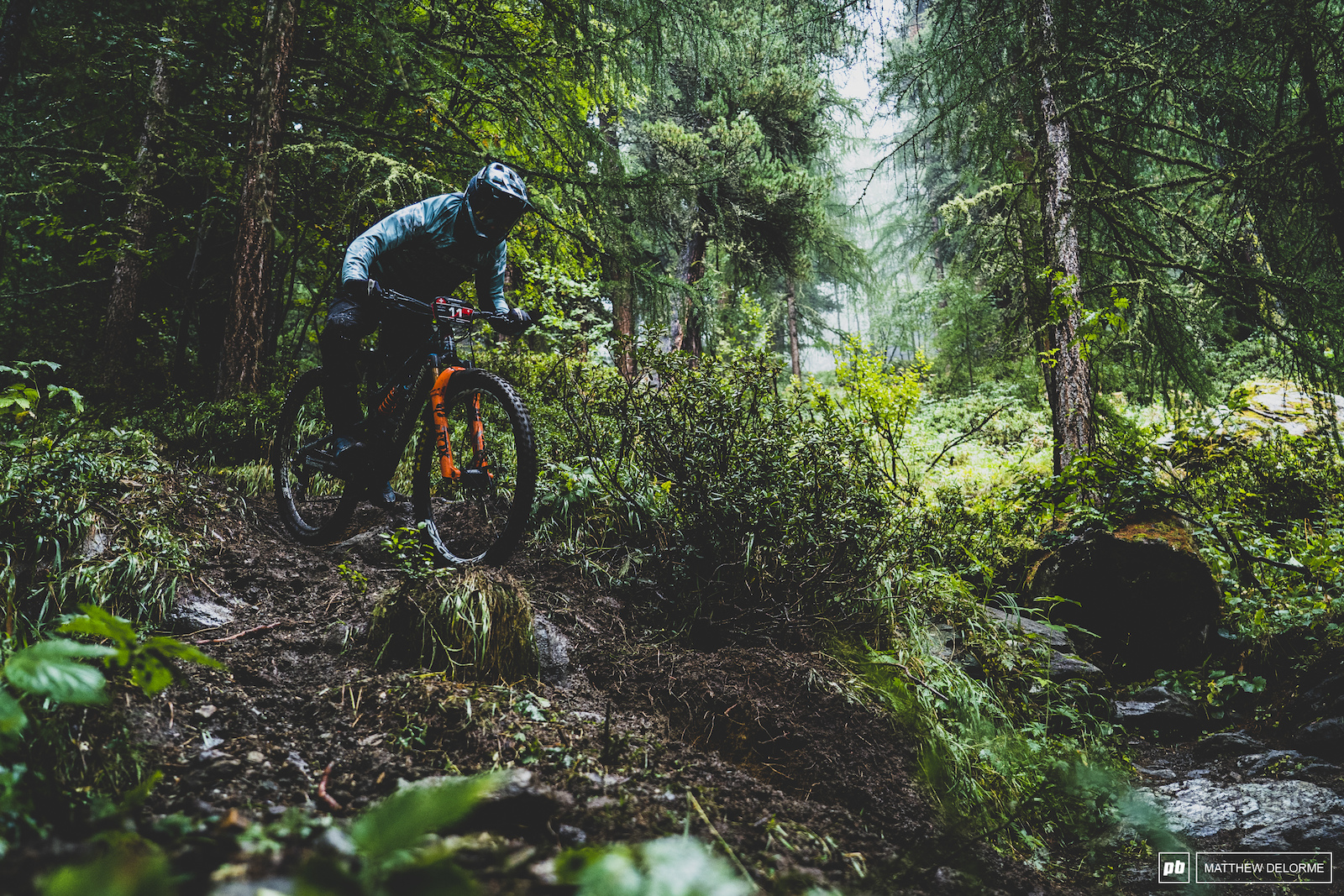 Jesse Melamed had one hell of a day and took the win. 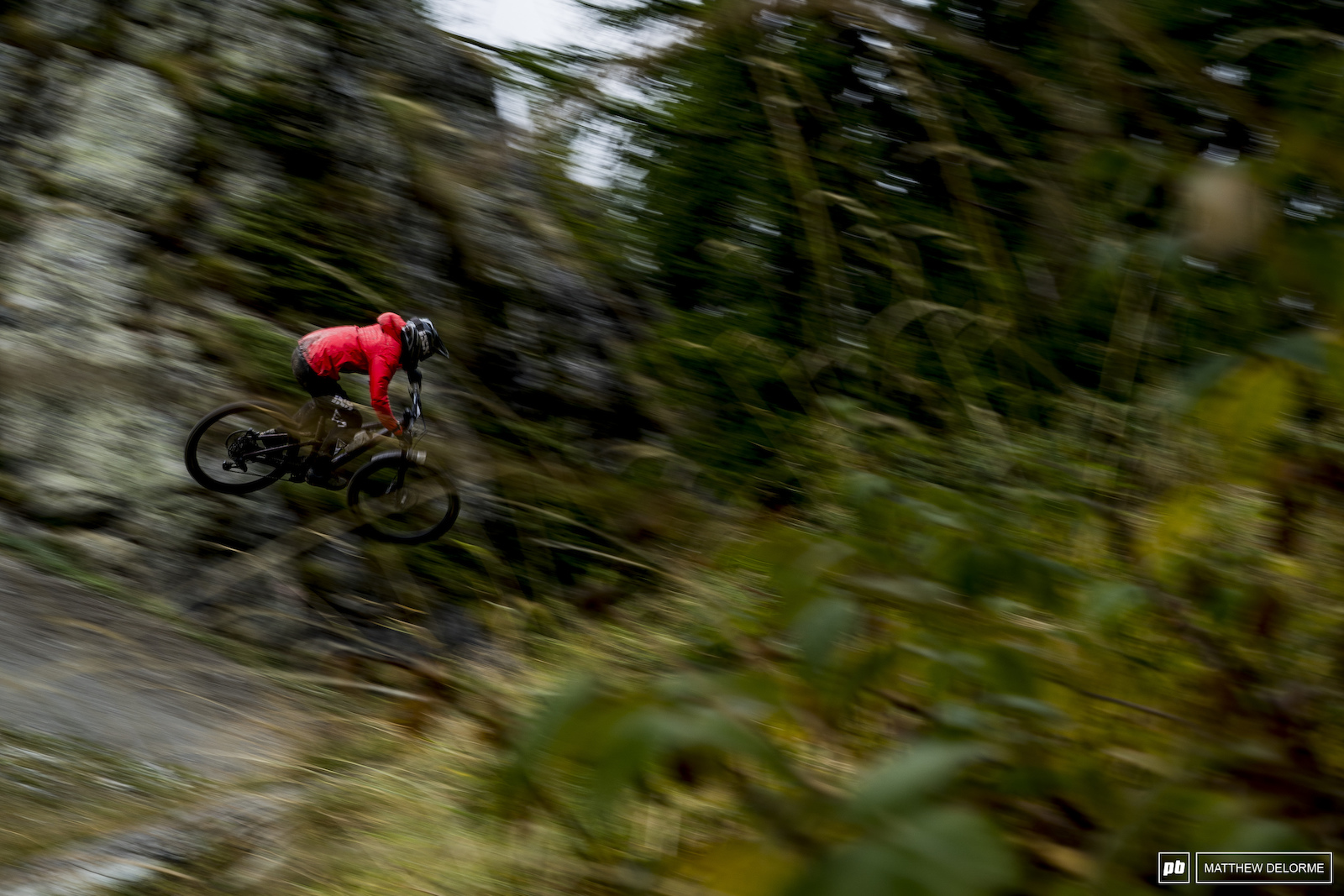 As the clouds cleared, the lower stage two started to dry out and roll faster. 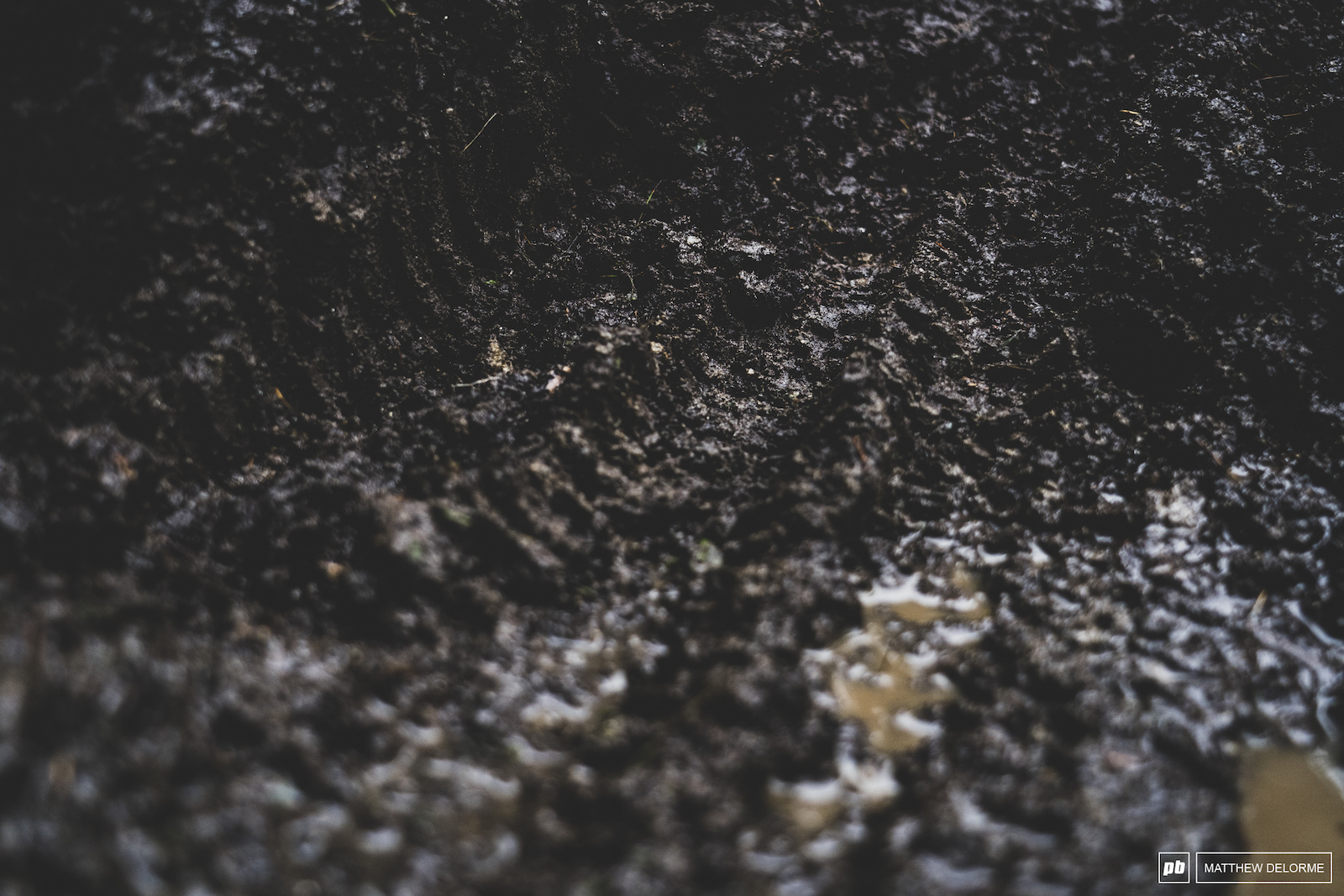 Them ruts got deep. 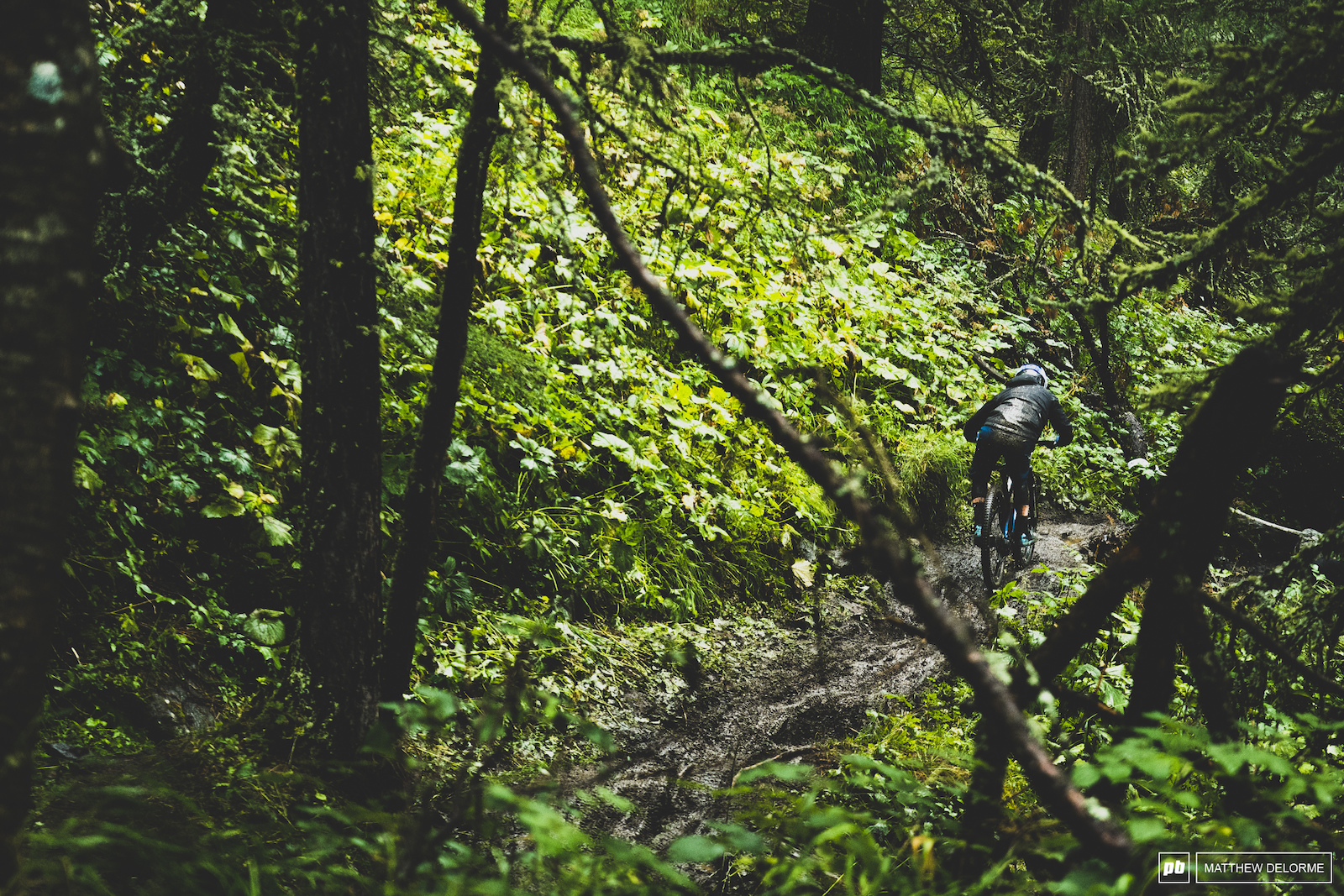 Hattie Harnden took first for the U21 women. 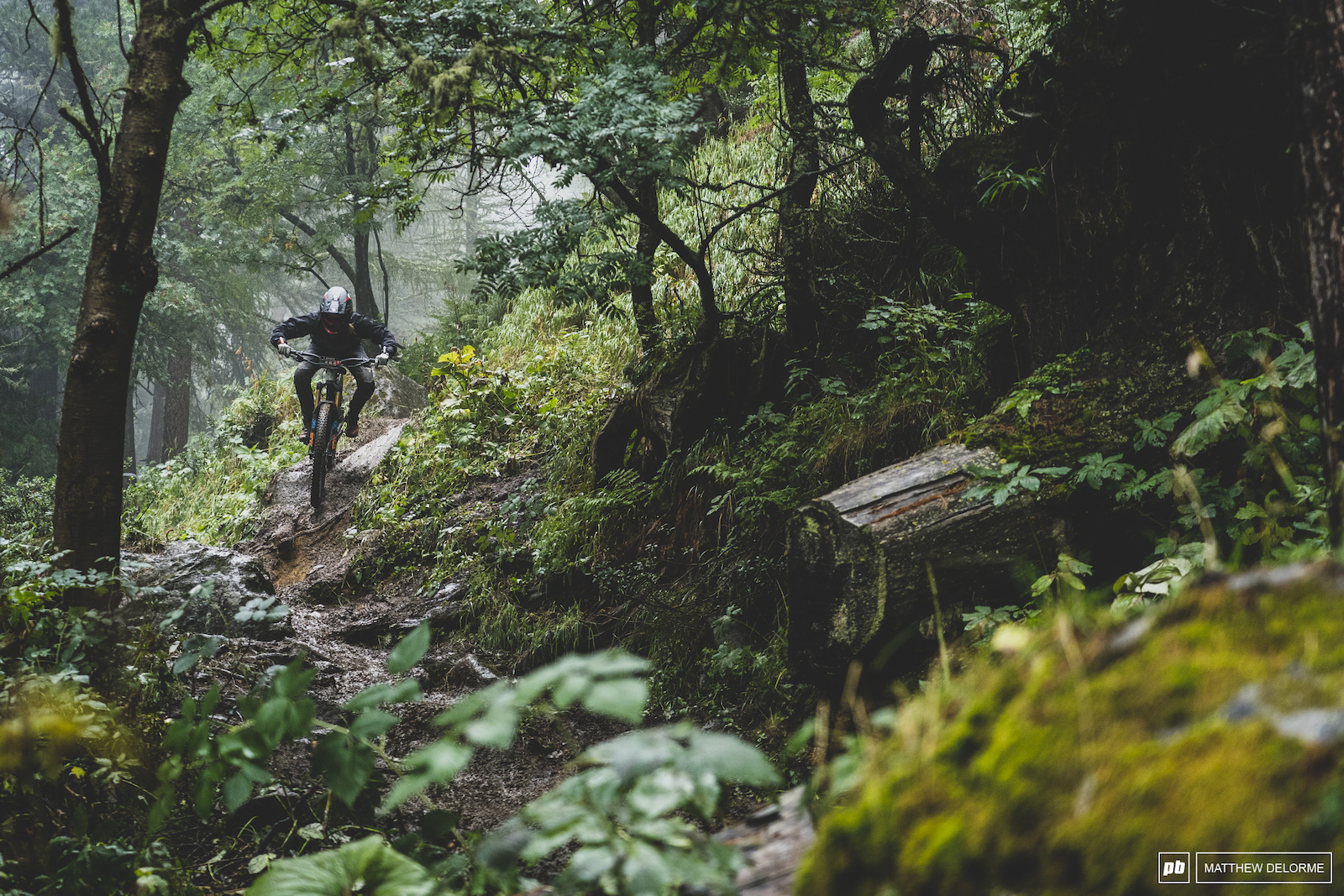 Stage one was a physically brutal stage. Mud, rocks and polished roots were like a minefield for the riders. 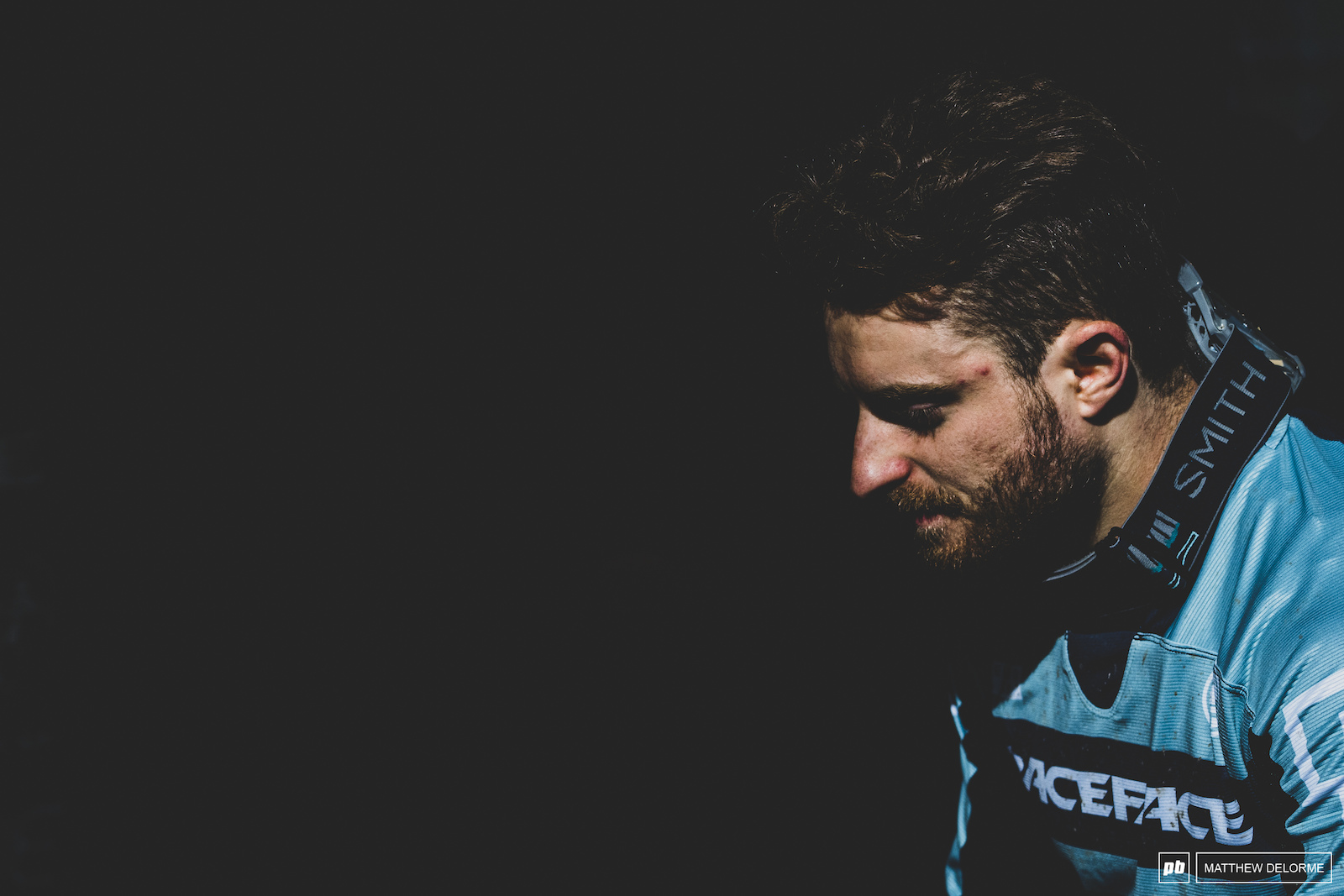 Jesse Melamed stayed on his bike and took the win today. The fast Canadian has always been on the knifes edge, today he held his line. 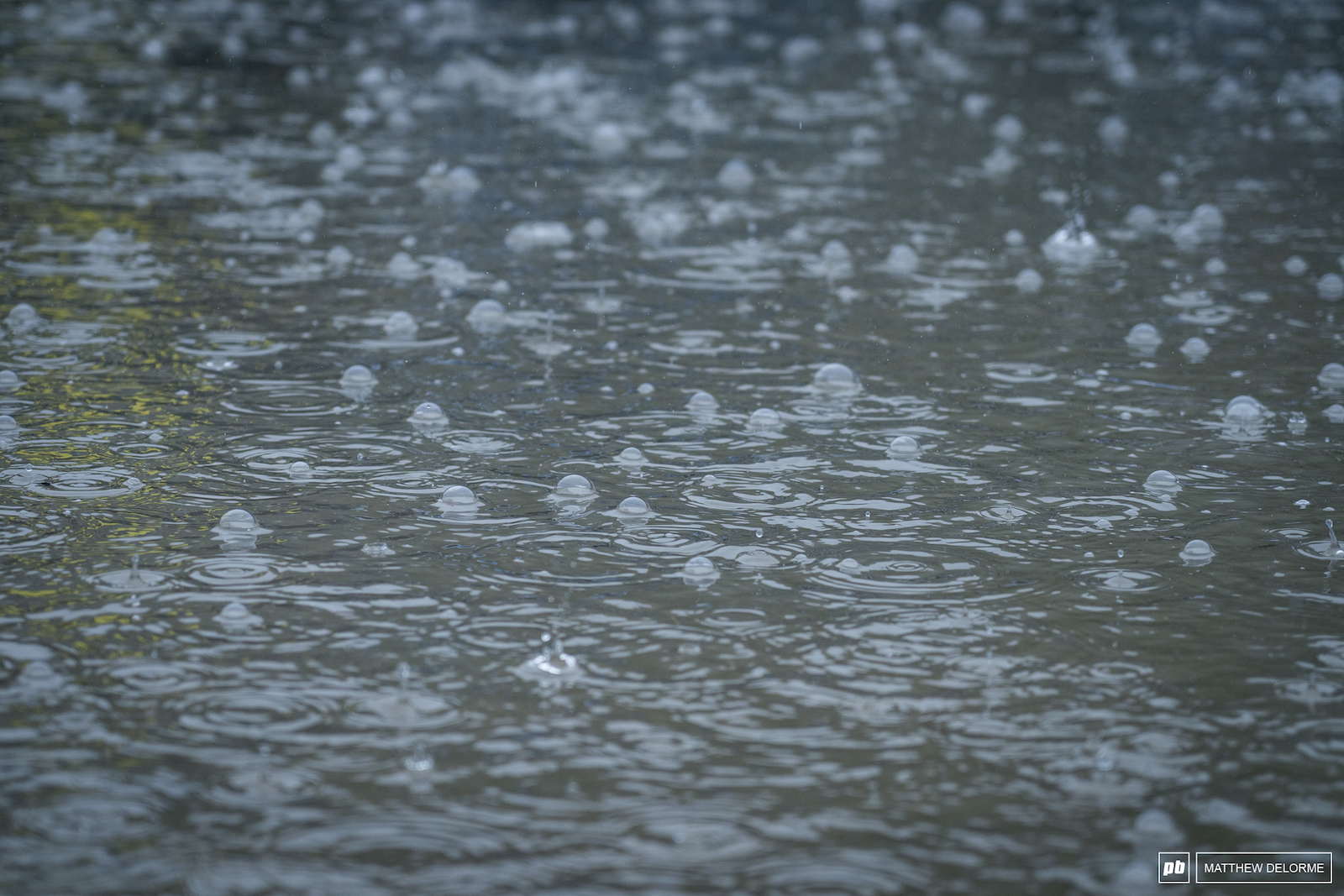 It felt like it would never let up. The weather has wreaked havoc on round one, but try hard as it did, it didn't win. 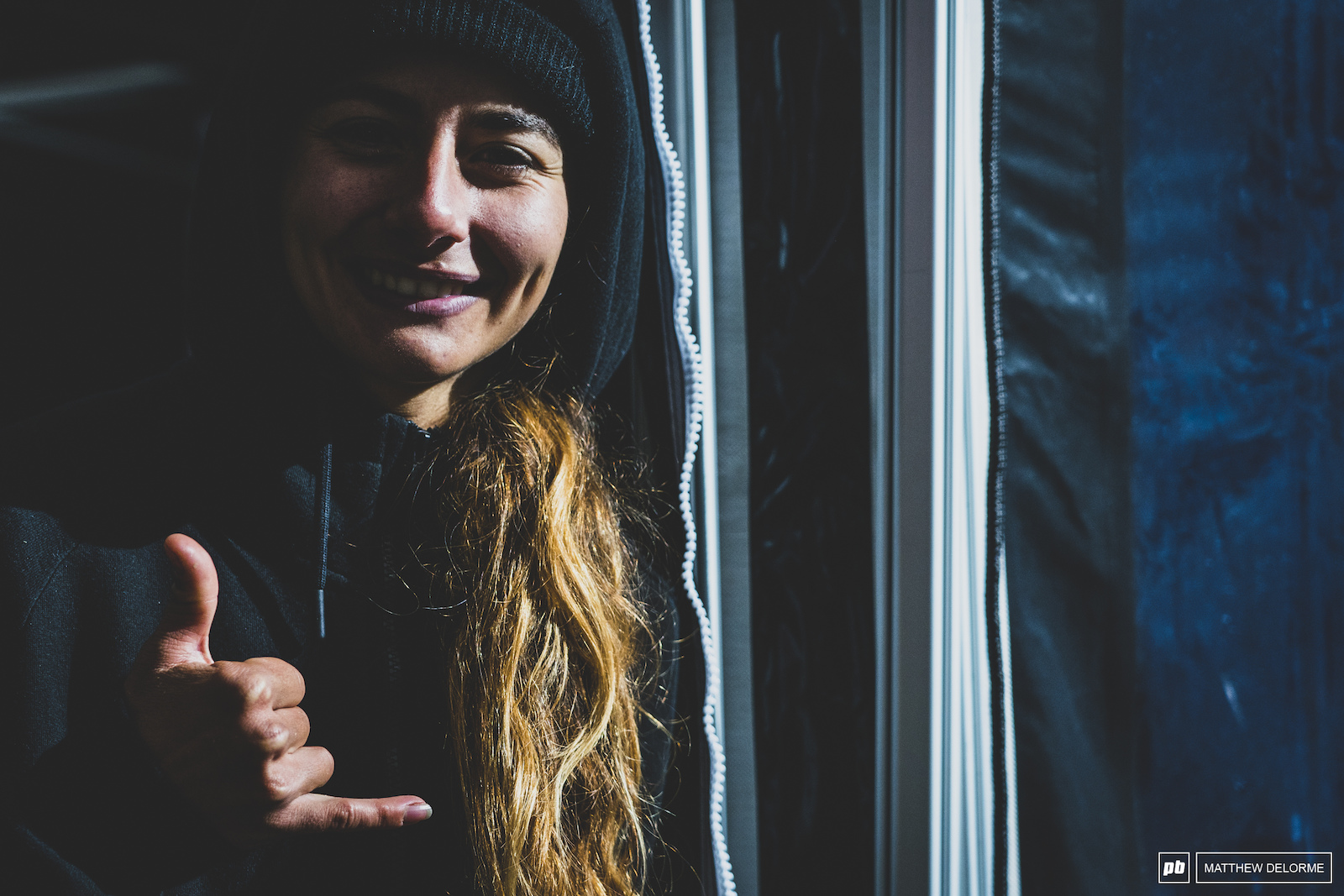 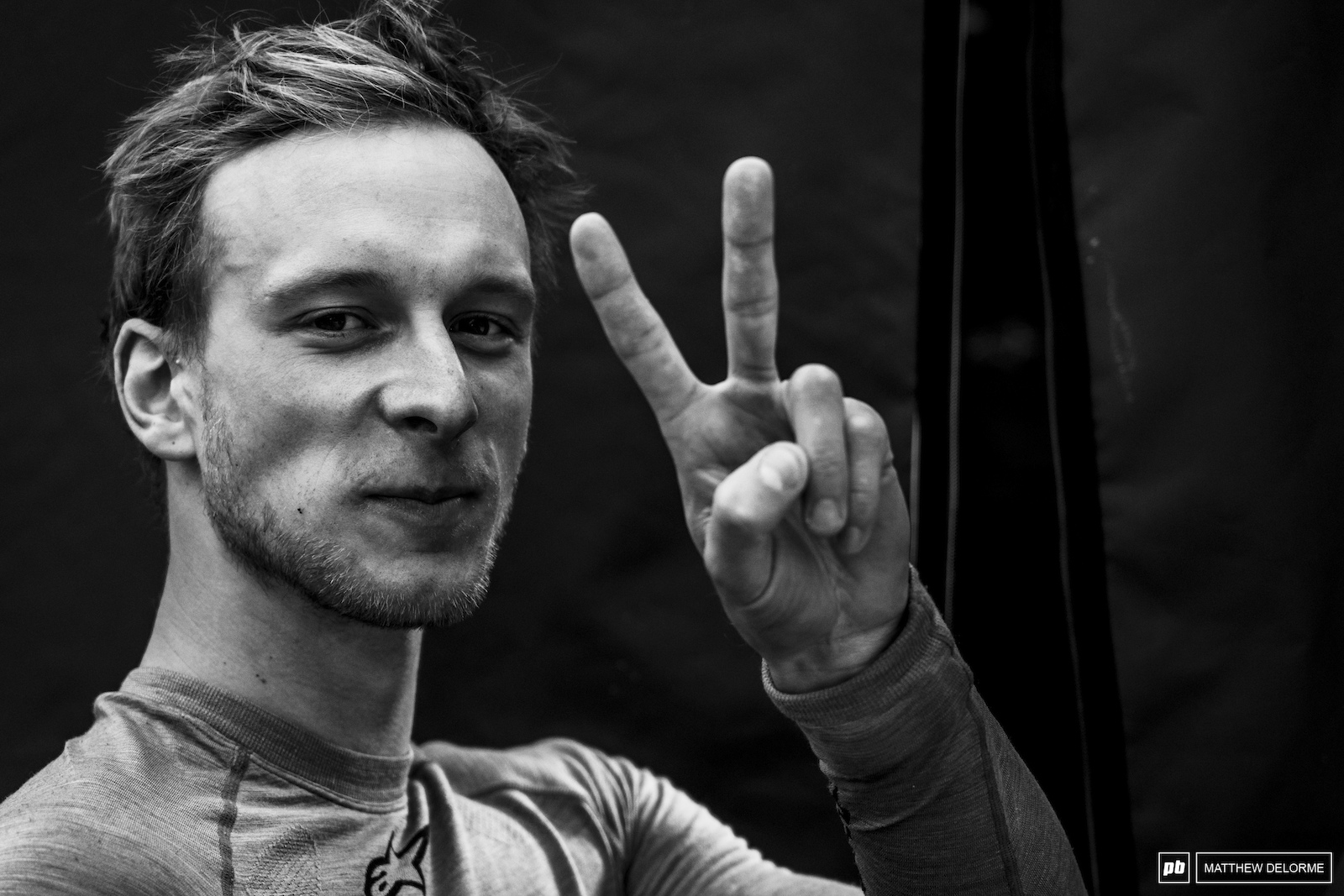 Second for Martin Maes, he could very well be the man to beat in Finale. 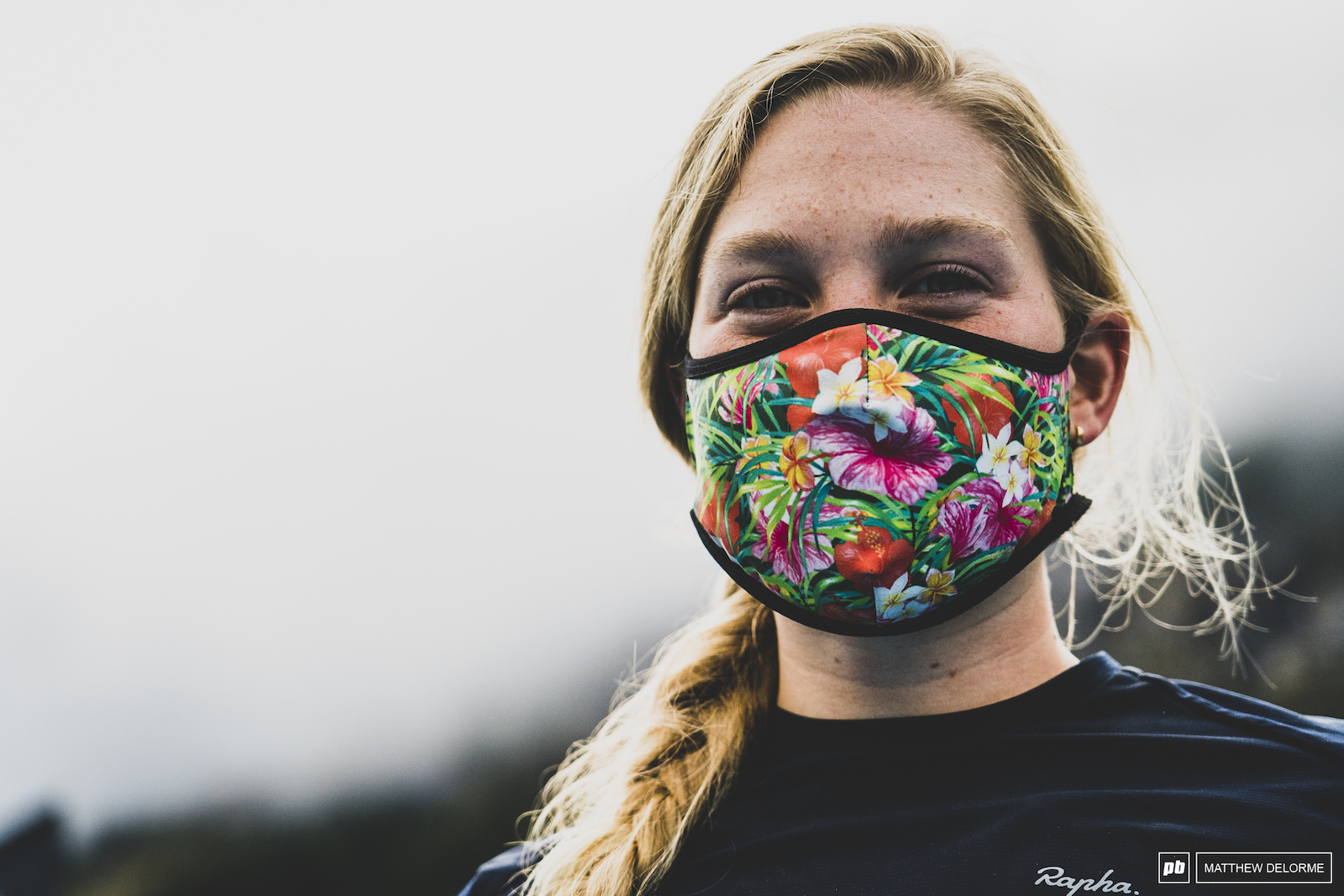 We assure you Ella Conolly is smiling after her third-place finish. 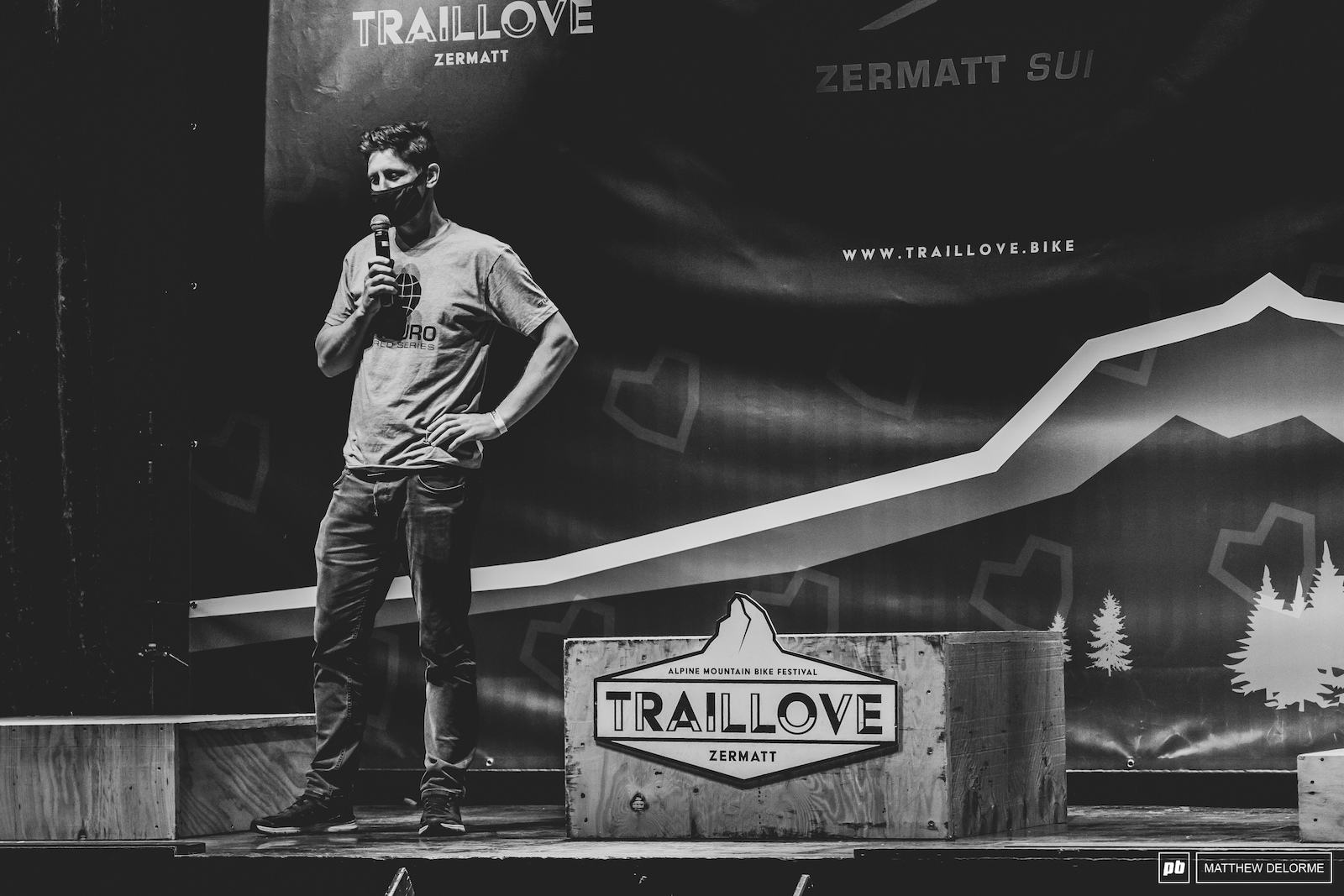 To say 2020 has been challenging for Chris Ball is an understatement. As he spoke tonight, he was humble, a bit emotional, and hopefully proud of what he and the EWS staff have accomplished here. 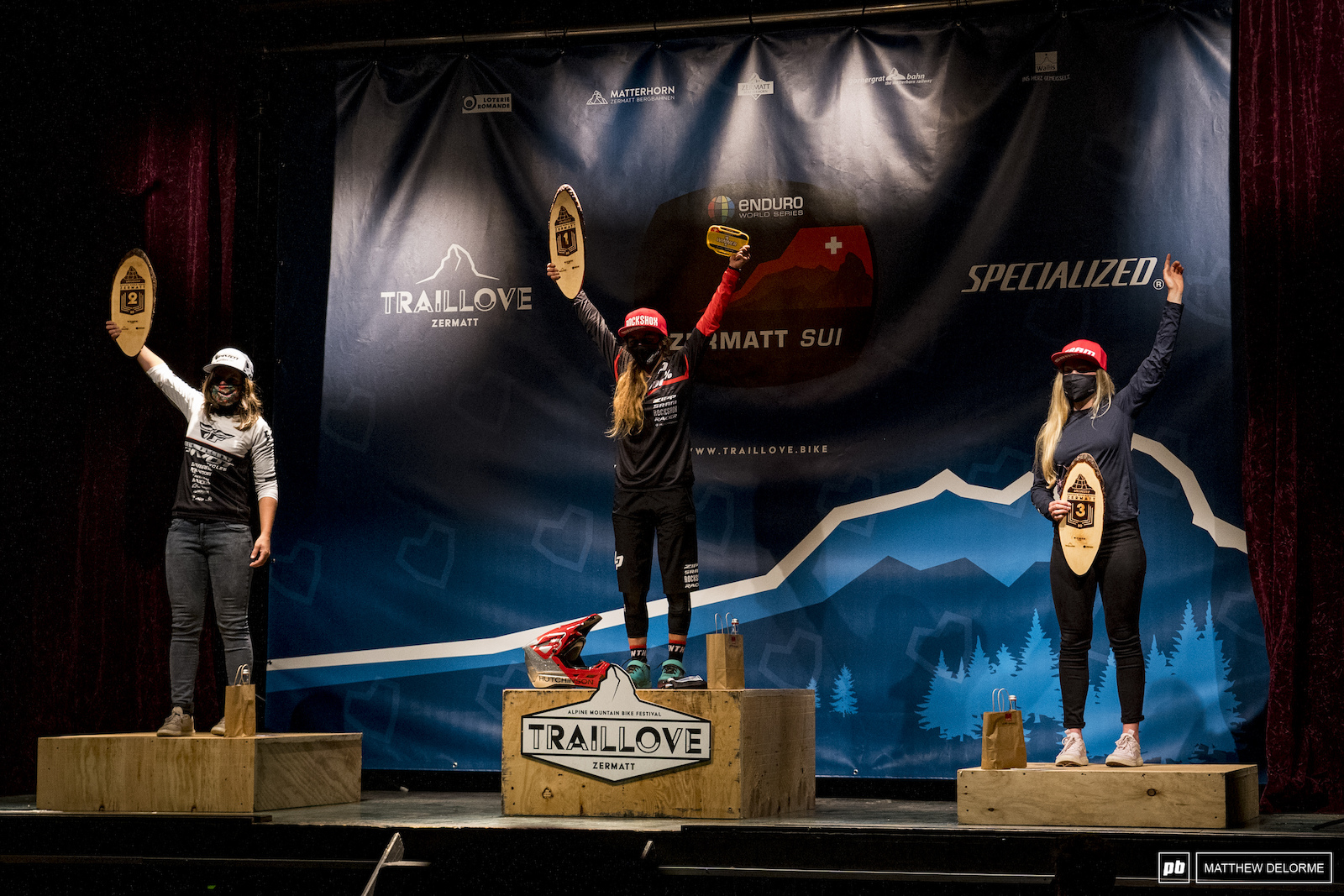 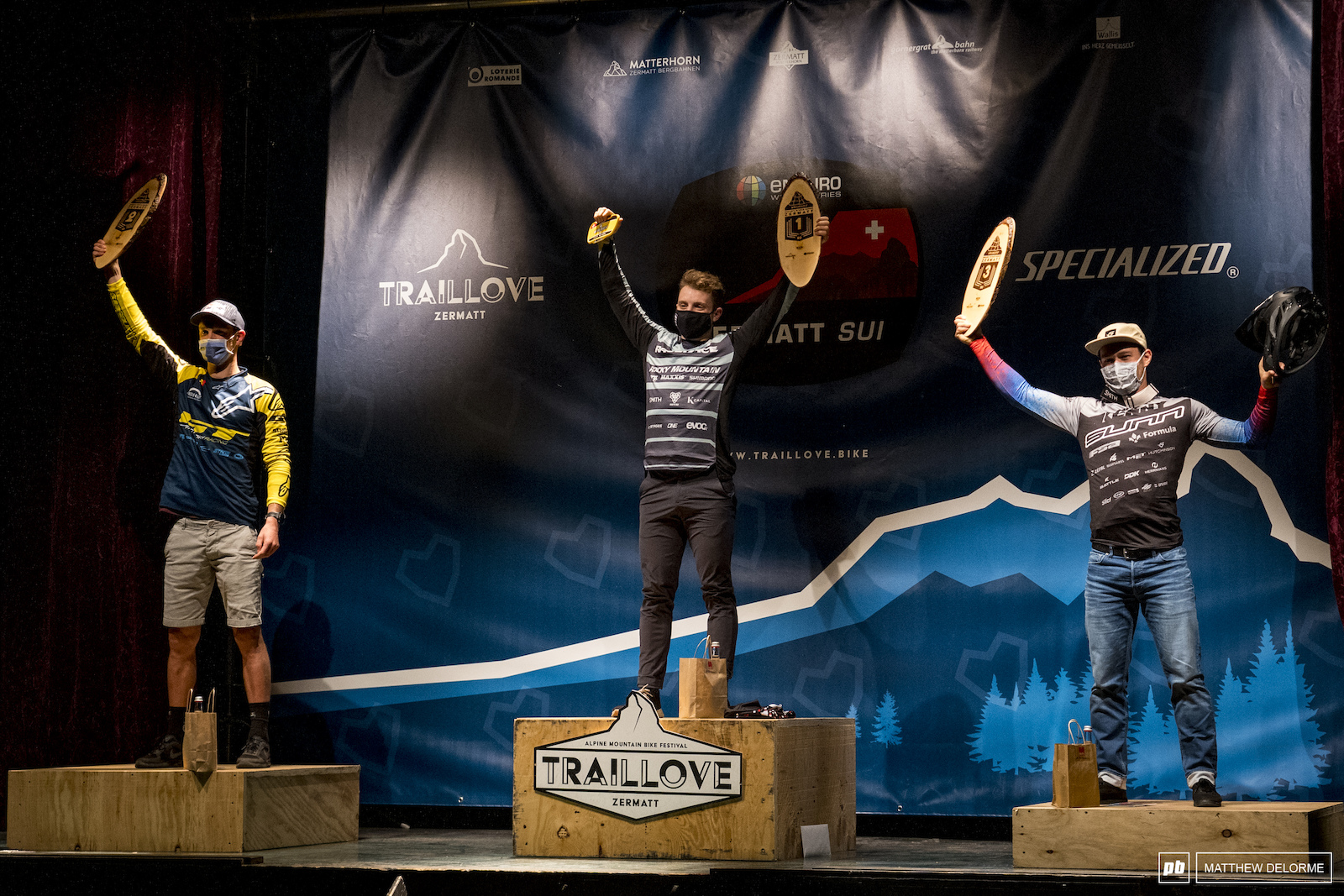 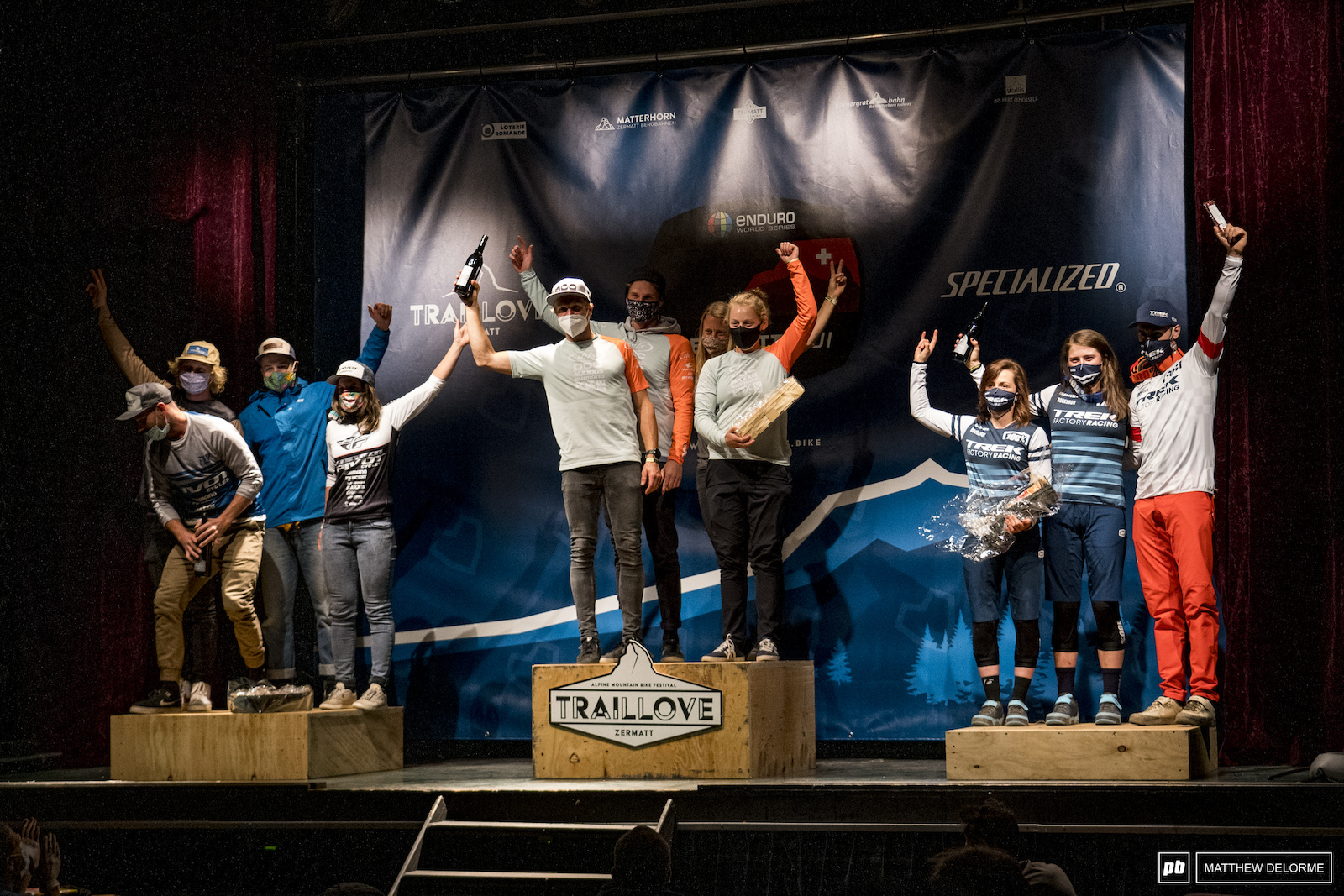 IMeasureStuff (Aug 30, 2020 at 19:34)
After seeing the recent video on PB of Ella Conolly ripping it up in the highlands mud and wet it's no surprise to see her on the podium in these conditions.

dirtyburger (Aug 31, 2020 at 0:00)
Absolutely loved the coverage, looked like hard yakka out there! But... Please tell me I'm not the only one that finds the last photo a bit... You know... Logically inconsistent with the symbolism of the extra space between the... Damn it's hard to even write. Fuck it, I don't care anyway. Congrats to all the riders and everyone else involved!

Carapau (Aug 30, 2020 at 16:37)
Congratulations to all of you! Funny that there are pictures of all the TOP5 except José Borges, who is third in the E-EWS and then comes to the EWS to be in fifth!

I think it deserved at least one photo or reference!

eugenux (Aug 30, 2020 at 23:29) (Below Threshold)
I think you are confusing mtb-ing with electric bike riding. Please get your facts straight. Thx in advance.

BTW it would have been really informative and interesting to have his feedback about the differences he feels riding both bikes at the top level... Where the ebikes are still lacking or vice versa.. Sad journalism is so predictive...

Have you electric bike worshipers, even after such a long-long time, still have problems in understanding that electric bike riding is not mtb-ing.
Mountain biking - something you do on a mountain, on a bike...which you propel it by gravity or by the power of your own legs.
Riding something with a motor can be whatever all of you want it to be, bar mtb-ing. Call it whatever you want you want but, call it what it is. What it is not, is mtb-ing.
Cheers guys.
As for the downvoters, I do hope your better halfs are pleased with the electrics you bring into your households.

No, that is more mtb-ing, as it is done on a bike designed to be used on a mountain. Even though my affection for DH is close to zero, the activity of riding a DH bike is a million times more mtb-ing then riding an electric would be.

Again, if it hard to understand.
Mountain biking = riding a bike on a mountaing using ones own power/strength/force.

Of course, you are entitled to your own opinion and you may or you may not agree with the one I have but, IMO, as long as any type of motor is involved, that is not mtb-ing anymore.

If you are lazy enough, not fit enough or have a disability/physical problem or you are simply old...theeeen...you have no place on blue/red/black/etc runs or on natural hiking trails. It endengers you and everyone else on the mountains. That means, you can be wherever on the mountain you want, just not on the trails.
Or alternativelly, electrics should come with a license and license test; can you push it up-hill with no motor for 300 meters. Can you carry it for 100?, do you have basic mtb-ing skills?, can you pedal a fire road 10 kms, with 350 meters of elevation in less than 30 minutes?, basically, can mtb without a motor?, if not, then you have no place on the mountain as, I have said, you endanger yourself as well as others.
Most ppl don't realize that, on a mountain, you only need to make a mistake once; it can be your last. This can happen to everyone but, ppl who have the training and experience on their side, tend to understand it better.
The little mid-aged butterflies, with money in their accounts and a "to do hobby list", really..really don't belong on full suspension moped in mtb trails.

Whipperman (Aug 31, 2020 at 10:04)
I have the impression that Jose Borges is always absent from the photo epics. I believe there was a feud between him and wym masters that ruled him out of the cool guys club.

onyerleft (Aug 30, 2020 at 15:09)
Pretty insane to see EWS racers riding with a hooded jacket. Might as well be riding with a sail behind you.