$4950 USD
This is a 2017 Yeti SB5.5 Turq frame (the nice one) and Turquoise color with the X01 build kit on it. The bike has been amazing and has been professionally maintained over the last year since I bought it. The fork and shock have both been serviced recently at a shop as well as a full tune up and new brake pads. I have loved riding this bike but at 5'10" on the large size the bike feels a bit big for me in some situations so I want to sell it to swap frame sizes. Handling wise this bike is incredible, I was blown away by how nimble it is for a long travel 29'er and how confidence inspiring it is at higher speeds. I added a bashguide from oneUp and the steerer tube has been threaded for the oneUp EDC. There are only a few small scratches on the frame as it has been ding taped from the start. Asking $5200 Specifications Rear Shock: Fox Float X Fork Fox: 36 Factory Headset: Cane Creek 40 Cassette: SRAM 1295 Eagle 10-50t Crankarms: SRAM X01 carbon Bottom Bracket: SRAM GXP BB92 Rear Derailleur: SRAM X01 Eagle Chain: SRAM Eagle XX1 Gold Handlebar: Yeti Carbon 800mm Stem: Race Face Turbine 50mm Grips: ODI Elite Flow Wheelset: DT Swiss 350 w/XM481 Boost Tires: F: Maxxis Minion DHF 2.5 EXO, R: Maxxis Aggressor EXO 2.3 Seat: Yeti / WTB Custom Seatpost: Fox Transfer, 150mm drop Chain Guide: OneUp Bash Guide

$4000 USD
It's that time of the year again, I need a new bike and need to get rid of this one. This bike has been awesome, it climbs amazing but has no problems spending days at the resorts. I also have to realize that this bike is for my riding style about 10 years ago, I am not as rad as I thought I was. Time for a bike with a little less travel for me. I have less than a full season on this bike, I got it last year at the end of May and it hasn't seen much time since it started to snow. The bike also just got a winter tune up and has the suspension professionally serviced. It got new pads and chain no more than 5 rides ago. The cassette is also the upgraded to the X01 XG-1195 from the stock XG-1180 towards the end of the season due to some creaking coming from the cassette. Spec is as follows: 2016 Yeti SB6c XO1 Green Large Fork: Fox 36 Factory Fit 4 Shock: Fox Float X Factory Headset: Cane Creek 40 44X56MM Internal Crankset: Race Face Turbine 30t BB: Race Face BB92 Rear Der: SRAM X01 1X11 Shifters: SRAM X01 1X11 Cassette: SRAM XO1 / 10-42T (Upgraded) Chain: SRAM 1130 / 11 Spd (New) Wheels: DT Swiss 350 W/EX471 Boost Front Tire: Maxxis Minion DHF 3c 2.5 / Tubeless Rear Tire: Maxxis High Roller II 2.3 / Tubeless Brakes: SRAM Guide RSC (New pads) Rotors: SRAM Centreline 180F/180R Handlebar: Easton Havoc Carbon 35x800mm Stem: Easton Havoc 35x50mm Grips: Easton 33mm Blk Lock-on Saddle: Yeti / WTB Custom Seatpost: SRAM Reverb

$4000 USD
This is 2015 Intense Tracer T275c with the XO1 Pro build kit. Color is the naked carbon. Size is large. It's that time of the year and a new bike is needed for the season. This bike retails for $6400. The bike can be sold with the pictured Fox 36 RC2 or the stock Rock Shox Pike RCT3, both forks are 160mm travel. This bike has just been professionally serviced, including a full tune up and suspension service. Build is as follows. Frame: 2015 Intense Tracer T275c with a Rock Shox Monarch Plus Fork: Fox 36 RC2 or Rock Shox Pike RCT3 Wheel Set: Stans Flow EX with 3.30 HD hubs with Maxxis High Roller 2 2.3 tires Drivetrain: SRAM XO1 1x11 with 10-42t cassette and 30t Chromag ring or 32t SRAM ring Brakes: Shimano XT with 180 rotors front and rear Seatpost: Rock Shox Reverb 31.6 x 420 with 125mm drop just replaced by SRAM with WTB Volt saddle Stem/Bar: Raceface Atlas bar with Renthal 50mm stem 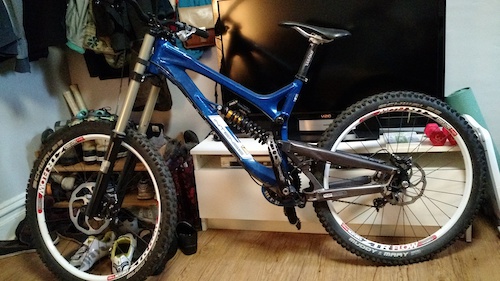 mdye daniellebaker's article
Sep 29, 2014 at 7:20
Sep 29, 2014
Red Bull Rampage 2014: Wil White
Who would want to sponsor a rider who has no regard for authority, ie the Fish and Wildlife Service. I think that most of us have trespassed at least once, I have ridden the same trail in SD where he got cited for trespassing but most people aren't dumb enough to build major trail features on public land reserved for wildlife. To think that just because you can build it means that you should just shows how mistakenly entitled some people feel. Mountain biking to me is about getting out into the mountains, not building a freeride park in the middle of the city of San Diego. If I had the ability to sponsor a rider it certainly wouldn't be a rider like Will White.