There was a time when mountain bikers would do damn near anything to peel weight off their bikes. Racers were some of the worst offenders. Drilling holes in frames was not uncommon. Nor was it unknown to run 2 or 3 rotor bolts. One slightly clueless professional XC racer even went so far as to remove the springs from his SPD pedals just before toeing the line for national champs only to discover that those paltry 12 grams actually DID have a purpose: upon their removal he could no longer clip out. Ooops! Colin Bailey recalled a teammate so OCD about bike weight that he’d file his chain ring bolt heads square. Crowning glory? Matt DeLorme once observed an XC racer weighing cleat bolts in an effort to shave grams. Cleat bolts? Seriously?

Why the weight obsession? Simple: a light weight bike accelerates quicker—key when coming out of a corner, and they climb easier than a boat anchor… basically they allow you to dance through the woods vs. suffering a slog. But in more black and white terms, a lighter bike is a recipe for racing success—even for DH—and that attitude trickled down to the masses.

But do these sorts of weight savings shenanigans have a place any longer? Maybe. Maybe not. As a couple of World Cup XC racers once told me, a weight difference of 2 lbs. (1100 grams) doesn’t detract from performance over the course of a two hour or less race. And looking at the numbers, a top shelf SRAM drivetrain/brakes set up has a scant 68g weight leg up on Shimano’s top shelf offering. But those 68 grams really don’t matter when it comes to racing your bike at the elite level for the simple reason that if you’re sponsored by either SRAM or Shimano, you can’t opt to run random lightweight gizmos unless you want to lose the money paying your salary. But the vast majority of mountain bikers aren’t bound to those kinds of sponsorship constraints, creating a perfect breeding ground for the modern weight weenie to flourish. And fluorishing they are! I know of multiple individuals with spreadsheets documenting every gram on their bike. 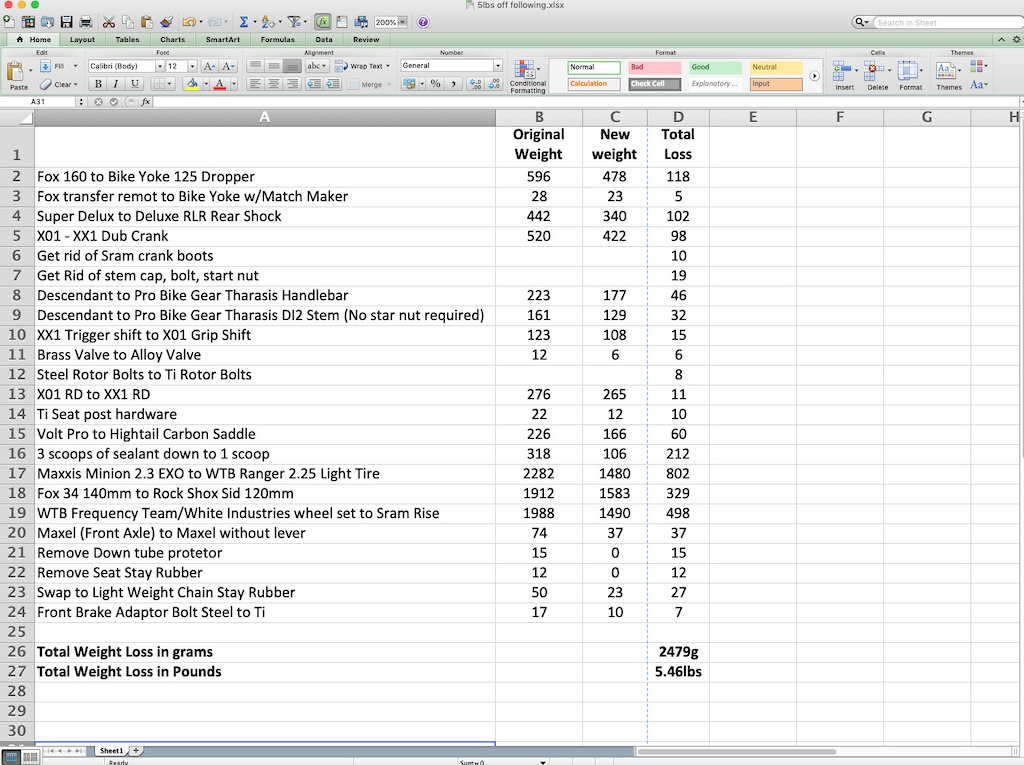 So if the gloves are off, where CAN the modern day weight weenie peel off the grams? Bouncing this question off a few long time industry types who know a thing or two about shaving grams—Chris Mathis (long time Luna/Clifbar wrench) Nathan Riddle (compulsive tinkerer and enduro racer), Geoff Kabush (XC racing honch and an early 1x adaptor before 1x officially existed), Colin Bailey (former DH racer and now Giant Off Road wrench), and Doug Dalton (long time industry wizard)—turned up the following: foam grips, judicious use of titanium bolts and carbon bits, lighter weight, lower spoke carbon rimmed wheels, lighter weight tires (manufacturing variations mean identical tires can vary in weight by as much as +/- 5%; weighing tires to find the light ones can save you 80-100 grams), and those same random feather weight gizmos guaranteed to tank your sponsorship deals if you’re a World Cup honch sponsored by SRAM or Shimano. Things like Trickstuff Piccola brakes (323.6 grams), Ashima ai2 160 rotors (73 g each), and Crank Brothers Eggbeater 11 pedals (179 grams).

To put this into perspective, say you’re rocking it with a reasonably svelte trail bike—a 26 lb. carbon 29er with 120 mm of travel—kitted out in either full XTR or XX1, trail pedals like Time Speciale 8 pedals, an alloy cockpit with lock on grips, a titanium railed saddle, and 2.4 tires. For bling sake, we’ll call out Chris King hubs mated to Stans Arch MK4 rim with 32 spokes. Swapping to E-Thirteen XCX Cranks, a full carbon cockpit (including Enve carbon M6 V2 50mm stem (94g) dressed in Trickstuff Piccola brakes/ai2 rotors with ti caliper and rotor bolts, MCFK carbon open saddle, foam grips, lighter weight but identical tires, identical hub design but a 28 spoke count with alloy nipples laced to high dollar carbon rims, and Eggbeater 11s will see you peeling off roughly 1440 grams, or 3.17 lbs. Ditch your 150mm dropper post for a rigid, lightweight carbon one and shave off another 350 g/12.35 oz. (.77lb). All in we’re talking a total weight savings of about 1790 g/3.93 lb. And I can already see you plotting where to shed the remaining 32 grams to make it an even 4lbs (hint: run lean on tire sealant).

These are rough numbers—there are a lot of variables at play here. Nor have we even discussed swapping forks, etc. But this diet will cost you a pretty penny: $6k USD or so. Personally, for that kind of money I can easily go on a diet to peel off 4 lbs. But other than these simple, but expensive, weight savings, short of going full @dangerholm, you’ve peeled off about as much weight as is realistically practical. And you could certainly peel off more weight if you want to spend more money or are willing to remove things like your crank boots, swap out your 2.4 rubber for something skinnier, etc.

But is there a performance benefit in peeling off all that weight? Maybe “Yes!” if you’re that rare privateer racer on the XC World Cup circuit, but probably “Nope!” if you’re Joe Schmoe—unless you’re a weight weenie. And if you are? Then you’ll swear until you’re blue in the face that your light bike is better. But is it really? I would argue that it's purpose built simply to be a light bike, and not to perform better.

What about going the other way and adding weight in the name of a performance benefit? Keep in mind, 20 years ago, short of doping, shaving bike weight WAS the easiest performance advantage one could get. But nowadays one need look no further than the use of a dropper post: the World Cup XC race courses are technical enough now that adding that 350-ish gram penalty is almost the norm—it’s that much of a game changer. So where else does it make sense to add weight to even a simple trail bike to gain performance for everyday riding? I put this question to my informal panel and they came up with the following: brakes, hand guards, dropper post (duh), and tire inserts.

Brakes: the old saying is, "brakes just slow you down”. But how they slow you down is kind of important. Power, without modulation is useless. The simplest way to get better modulation is to use a larger rotor. The move from a 160 rotor to a 180 rotor will add roughly 24 g per wheel, regardless of rotor manufacturer, plus 20 or so g for a brake caliper adaptor. Jumping from 180 to a 203 will add roughly another 30 g per wheel, but about the same amount of weight for a brake caliper adaptor. Total weight increase? Roughly 70-80 g. Still craving more power? Jumping from a two pot to a four pot brake set will add roughly another 110 g.

Hand guards: somewhat debatable, and it depends largely on where and how you ride… But modern mountain bikes can be leaned over a fair bit more when cornering vs. their old 26” counterparts, which can lead to the odd branch unexpectedly grabbing your brakes and/or whipping your knuckles. Doug Dalton uses hand guards for exactly that reason. Plus they help minimize airflow over one’s hands—useful for keeping the digits functional when riding longer descents in chilly temperatures. A set of Sendhit Nock guards will add 167 g to your bike. The Nuke Proof Sam Hill AVS guards are lighter at 123 g, but don’t offer quite as much protection.

Dropper Post: Nothing to see here. Move along. Plus 350 grams.

Tires Inserts: wheels are arguably the worst place to add weight to your bike, but nothing can ruin a race or a ride quicker than a flat tire. A double down or similar casing will add 240 or so grams to each wheel while offering a fair bit of flat protection without the weight penalty of a full DH casing. But a lot of riders are going with a tire insert instead of a beefier tire. It’s adding about the same weight to your wheels and lends a certain “Hulk Smash!” attitude to line choice, but from a performance perspective there is some definitive science in favor of using a tire insert. Think of your tire as a component of suspension: the air in that tire is the spring. A spring without a damper will just pinball off everything. Adding an insert is basically adding that missing damper. This effectively makes your tires a more functional as a
component of your suspension by helping to reduce impact force from big hits, as well as providing greater sidewall support for harder cornering without burping or squirming. More importantly, inserts also allow the use of 2-3 less psi for not only more grip but actually faster travel due to the increased ground hugging ability—a concept known as “theory based vibration absorption”. Review after review essentially tells us the use of an insert is a game changer, even for those of us mere mortals who aren’t racing. My guess is that tire inserts will soon be as much the norm in the XC race pits as the dropper post for the simple reason that it offers a competitive advantage with a minimal weight penalty. Rumor has it Trek, Scott, Primaflor and a few others are already using inserts for exactly that reason.

So let’s do some math. Let’s take that same svelte 26 lb trail bike. Let’s say it already has a dropper post and four piston brakes with 180 rotors. Adding 203 rotors to a bike like that isn’t really necessary or practical—many trail frames/forks won’t take a 203 rotor. But adding the AVS hand guards and an XC Cush Core to the mix will only add 423 g—just under a pound—and cost you a paltry $225. From a “control” perspective for adding weight for a performance to an all mountain or enduro sled where 203 rotors will fit, adding those, hand guards, and Cush Core Pros will only increase your bike’s overall weight by 723 g/1.55 lbs for an almost unarguable performance advantage (hand guards being debatable). Feeling portly with that 1.55 lb weight gain? Forking over an extra $180 USD for a carbon bar can reduce that added weight to roughly 600 grams—1.3 lbs. Not a hand guard fan? Minus 123-167 grams for a net gain of a pound, plus or minus for roughly $500 USD.

Bottom line? A minimal diet for your bike plus some sensible performance upgrades can alter your riding experience for the better without breaking the bank. That goes way further in my book than spending six grand or more to brag about how light your bike is. The weight weenie is dead! Long live the weight weenie!