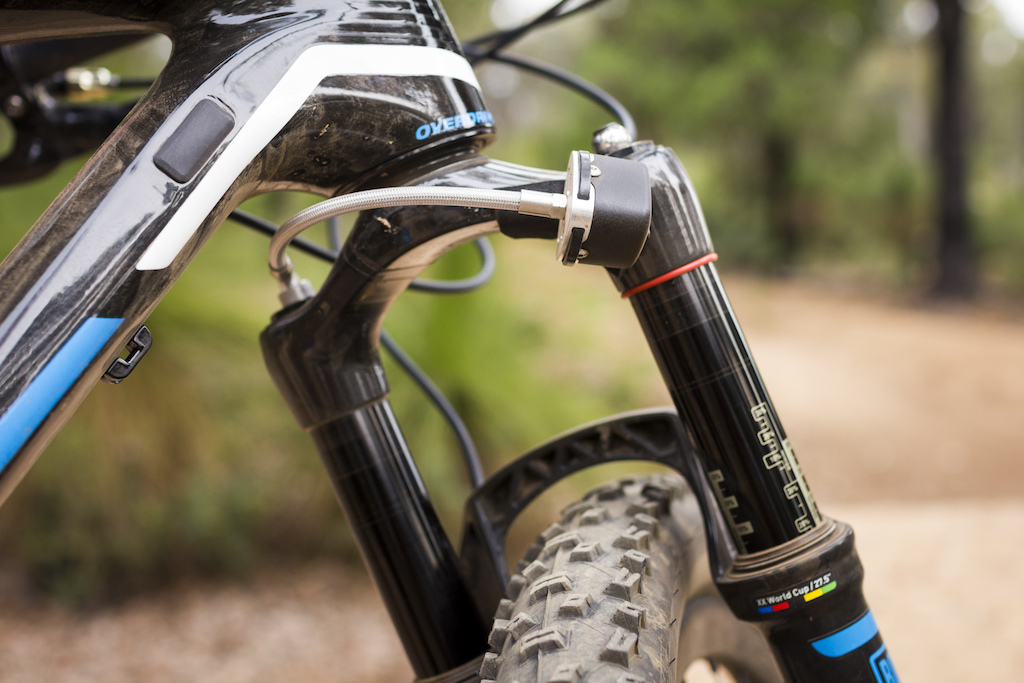 Dusty Dynamics, a small Australian company focused on suspension tuning, have a new product poised to hit the market that's aimed at bringing suspension data acquisition to the masses. Rather than requiring the installation of telescoping rods and complicated wiring, the Shock Wiz is a small device designed specifically for air sprung suspension that mounts onto a fork or shock's Shrader valve.

Once it's calibrated, the device works by monitoring the changing pressure inside the fork or shock's air chamber, which is an indication of how much travel is being used. With this data, the device can tell how often the suspension bottoms out, how quickly it's rebounding, and whether or not it's exhibiting any undesirable behavior, such as packing up. 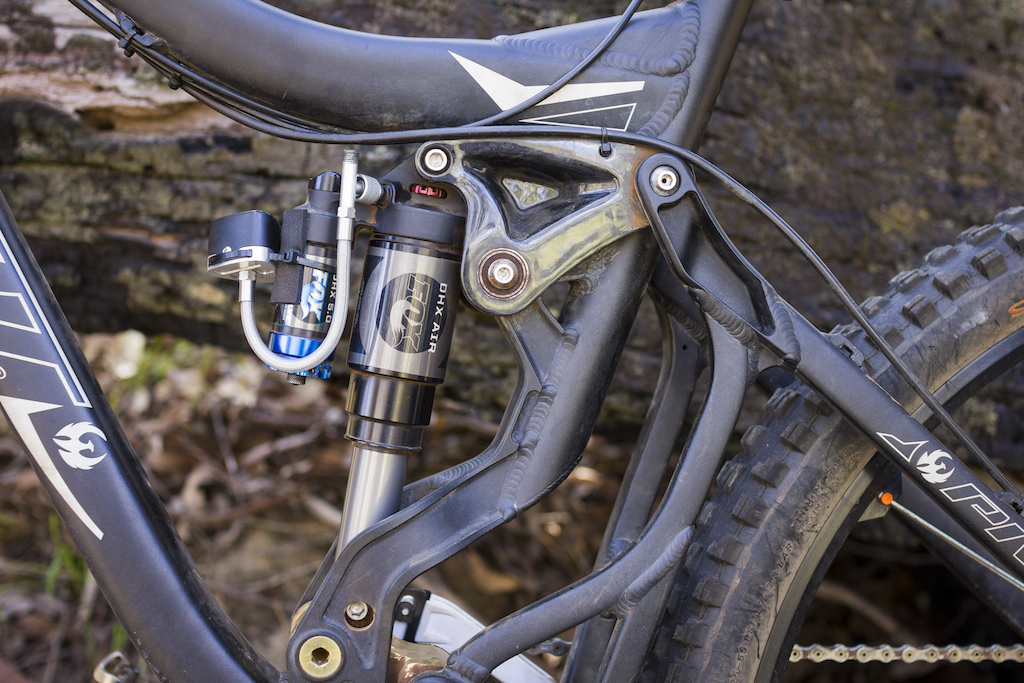 At the end of a ride the data is transmitted via Bluetooth to either a phone or tablet, where an app displays the information that was gathered, along with tuning suggestions based on which mode (XC, AM, or DH) the rider selects. The ShockWiz also features a jump timer that lets riders know how much time they spent airborne. Dusty Dynamics' goal was to make the device as user friendly as possible, and according to the company's director, Nigel Wade, “This device will enable riders of all levels and disciplines to obtain the most from their bikes, regardless of whether they have any suspension tuning knowledge or not.”

For many riders, glancing at the rubber o-ring on their fork stanchion is the only data acquisition they're interested in, but it's easy to see how this device could be useful for riders curious about the specifics of their suspension's behavior, another tool to help eke out even more performance from a fork or shock.

The app allows riders to calibrate the unit, monitor the shock's status, as well as view suggested setting changes.
The final price is expected to be $239 USD for a single unit or $449 for two, but lower pricing will initially be offered as part of the company's upcoming Kickstarter campaign, with the units expected to ship by early 2016.

pinnityafairy (Jun 6, 2015 at 7:07) (Below Threshold)
Have similar stuff on a race car. Some times all that data leads to one big pile that takes weeks to figure through. I think it is more so for tech people who like numbers. Also if you cant figure out what else to buy to keep up with the Joneses. This just might be it. I believe no one can tune better than the rider.

swamper1 (Jun 5, 2015 at 12:37)
This is some new innovation that will be welcomed by the masses. IMO this is way more useful, even if it is just a tool, than the plus wheel sizes being shoved down our throats. Hopefully the price will come down with time!

bikeeagle (Jun 5, 2015 at 12:50)
Quite interesting. Not so much for the regular rider, but if you own a bike shop, that could just be the extra service to keep your customers happy. Or, if you like to have that little extra for your tool-box.

therealtylerdurden (Jun 5, 2015 at 12:53)
This is badass! Doesn't seem like too obnoxious of an asking price, either!

groghunter (Jun 5, 2015 at 12:46)
I'm guessing these have reduced accuracy in exchange for lower cost, similar to running 1 sided power meter instead of 2. That said, probably more than accurate enough for anybody who doesn't have access to the stuff they use in the WC.

groghunter (Jun 5, 2015 at 13:06)
If I ran a shop, I'd buy a couple for bike setups & rental. advertise it as something the other shops don't have. Makes more sense to me like that than as something every rider buys.

groghunter (Jun 5, 2015 at 13:10)
That said, I think a day will come when everybody uses this, because eventually, I think shocks will come with data sensors integrated. Once you're doing electronic compression on the fly, the sensors needed to get this point aren't much more trouble to integrate.

groghunter (Jun 5, 2015 at 14:00)
They're not telling you how to fix the problem, rather, what the shock is doing. What's causing it to do those things, like reduced shock volume, or oil density, aren't relevant to it's accuracy, as it's just measuring what they do. Where I think it will sacrifice accuracy is that it isn't measuring shaft speed directly, it's inferring it from how quickly or slowly the pressure in the air spring changes. Even then, accuracy would probably be within a click or two of optimal, at worst.

fefillo (Jun 29, 2015 at 7:03)
But with this data, you can add or remove bottomless tokens, change oil and clicker setting all you want and then be able to compare pressure ramp up charts against one another, to hopefully try to understand how each of this changes directly affect your tuning and suspension performance. Which you can't now.

delusional (Jun 5, 2015 at 12:54)
Very cool! Be interested to see if the two devices can be synchronized to give feedback on the overall setup of the bike, rather than analysing f+r in isolation. Presumably it's logging time with every event. So, if it's not there already, as long as the two devices have a synchronized clock it could be software thing that can be added at a later date.

In fact synchronization with Strava data could make this even more exciting!

Two ShockWiz delivered to your door.
Tune your shock and fork simultaneously.

HaydenBeck (Jun 5, 2015 at 14:54)
Article about a tool designed for suspension preformance and everybody welcomes it and is civil about the high cost, but if this were an article about a drivetrain component or tire system people would complain about the price no matter what it was. Pinkbike is a crazy group of people... But I love it!

RichardScottDesign (Jun 6, 2015 at 3:58)
I know what you mean, but this seems really well priced for what it brings to the party. that definitely helps.

ermoldaker (Jun 6, 2015 at 11:33)
At leas this has some actual value to it (as in cost of manufacture) rather than a chain ring that cost $3 to produce and is sold for $70. We've reprofiled the teeth a bit but only because we think 'it looks right' this way - now give me all your money.

Who cares, I've still backed it !

rpowell6061 (Jun 5, 2015 at 21:06)
It would be nice if they added an aux pressure port to the data logger box so you can adjust pressure without having to unhook the device. Also I wonder how much pressure drop you would get hooking it up to a rear shock that has 200psi. The hose looks long but I haven't gone through boyles law on it.

mojoriders (Jun 6, 2015 at 12:55)
I like this idea. My girlfriend rides. And its hard to set up her bikes because she is riding them not me. So yes u watch the ride. U watch Whe the front and back is doing, set sag and check all the things u can. But I. The end. The settings are not the easy to adjust. So this is a good tool to help get it closer to perfect.

petjosh (Jun 5, 2015 at 13:15)
This would be a great tool for bike shops to help people set up the suspension on their new bikes properly. Very cool gadget.

EastCoastDHer (Jun 5, 2015 at 14:37)
Oh. Cute. Picorico did this earlier stateside. Alot faster. For any suspension not just air. And you get live data. With charts.

mrprometheus (Jun 5, 2015 at 15:01)
picorico.io does take a different approach and is open source. Hopefully we can have a kit in the same price point if you don't want to build one yourself. That would be a few months away at best however. Good to see some compelling products entering this space.

ryanjohnson86 (Jun 5, 2015 at 16:57)
Setting up suspension by trial and error is the most annoying thing ever. This would be awesome to use!

nomadrider10 (Jun 5, 2015 at 14:18)
Seems like a useful tool, my concern is that, though it might indicate what your suspension is doing, and make suggestions on what adjustments to make, I'm not sure all suspension even has enough external adjustment, or even the quality of dampening to achieve those results... I could be wrong though

groghunter (Jun 5, 2015 at 14:48)
Well, at least you'll know that's what's going on, instead of just thinking you're crazy. Should be able to notice the increased pressure from a hot shock, too, so if you need a piggyback, you'll know.

Edit: maybe this is the beginning to the other post: what is the next step in suspension design? pre-programed shock settings calibrated and selected via smartphone.

It does seem cool, but I want my bike to be more like Dukes of Hazard, not HAL 9000. Just sayin'

Weekev (Jun 5, 2015 at 13:35)
I guess it depends how you look at it. I was thinking the opposite. Elite riders would have a more advanced system and also know what they're doing regarding setups (along with their mechanics). But your average rider probably doesn't have the same knowledge or experience and would benefit greatly from the data. I think it would come in handy for both general trail riding (to see if your base setting are in the ball park needed for that type of trail), or for specific courses (say like doing a day on the WC course at Fort Bill).

dancingwhale (Jun 5, 2015 at 12:55)
This is awesome. Will definitely be getting one of these to use and whore out to my buddies.

beeboo (Jun 6, 2015 at 20:49)
Sounds really cool! I'd be curious to try one out just to know how my bikes are tracking the ground. For the people who love to tinker around with their adjustments, this will be a big hit!

rpowell6061 (Jun 6, 2015 at 22:02)
The accelerometer on the iphone6 is incredibly impressive. I wonder if you can just make an app that does the same thingas this but without dedicated hardware. And it would be measuring at the handlebar which will give more useful information than just what the shock is doing. $20 for an app would be better than $250.

oregonryder (Jun 19, 2015 at 13:47)
Would be a great device to rent from your LBS to help set up the suspension on your new bike or new shock/fork. I dont see using it every day though. Just once or twice to check things out, then remember your settings.

piranah (Jun 5, 2015 at 14:34)
Looks super useful. However, the hook up for the front shock looks like its just waiting to be sheered off on the first crash

groghunter (Jun 5, 2015 at 14:50)
There's probably some suspension designs that wouldn't play well with something sticking out of the air valve while riding, either.

Roachie (Jun 5, 2015 at 16:17)
This would work really well in conjunction with this app: www.app-uncture.com/bike-setup.html

metalmike (Jun 5, 2015 at 20:04)
This is great for a pro-am team and the privateer racers. just chip in and every one can use it to dial in suspension during practice.

pinnityafairy (Jun 7, 2015 at 9:19)
MTB is all about simplicity and enjoying my time on the ride. Take all your electric gadgets and put them on a E-bike please.

wanleggedwinston (Jun 7, 2015 at 10:14)
how does it know the difference between the amount of time spent airborn and manualing/ doing a stoppie

BrianK24 (Jun 5, 2015 at 22:43)
Leave the nerdy tech stuff for the road. Just have fun on the mountain. Power meters ruined road cycling for me. Just have fun