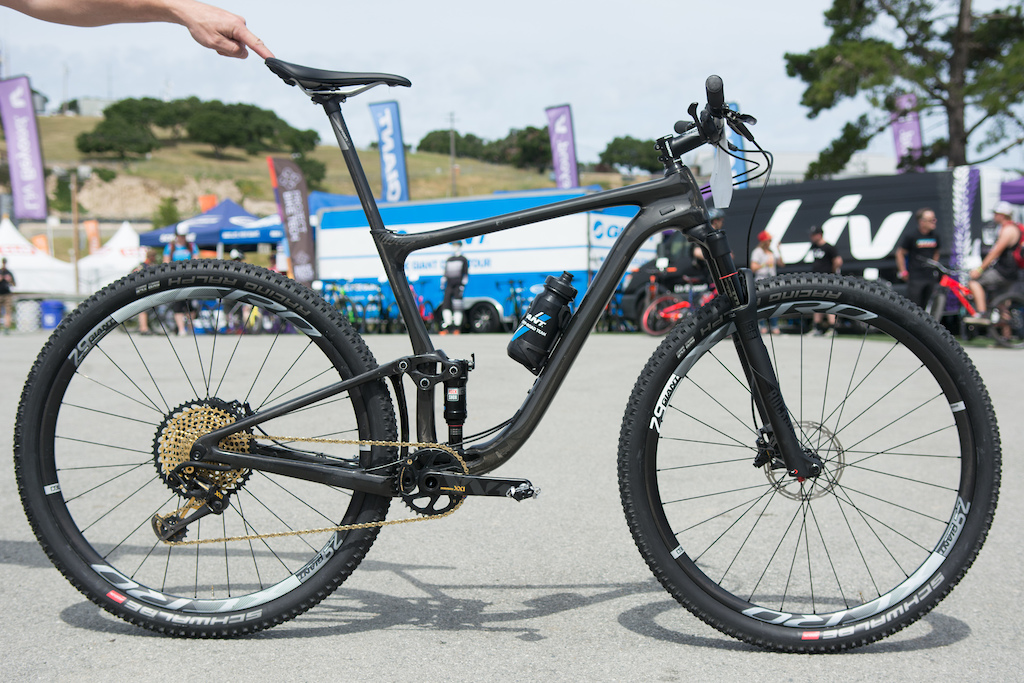 Back in 2014 Giant made the decision to fully embrace the 27.5” wheelsize, save for a few select models, in the process eliminating the Anthem SL, their purebred race whip, from the lineup. After a three year absence the Anthem 29 is set to return, and Carl Decker showed up ready to race at the Sea Otter Classic aboard an early version of the bike. The final details are still being kept under wraps, but Giant did say that the bike has 90mm of rear travel and a 100mm up front, and a full carbon frame. 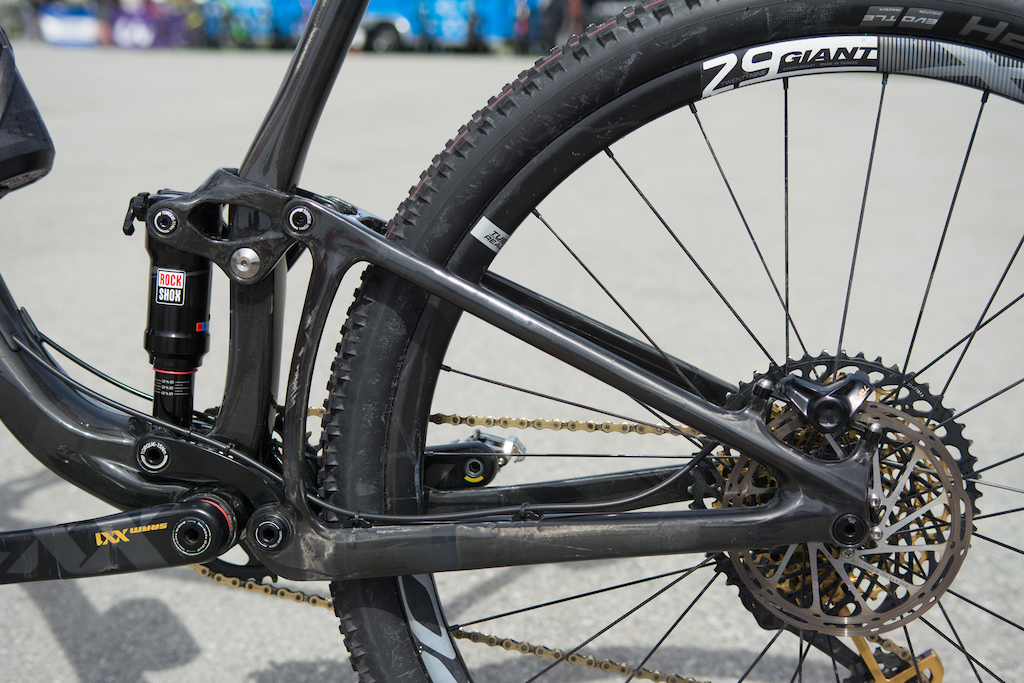 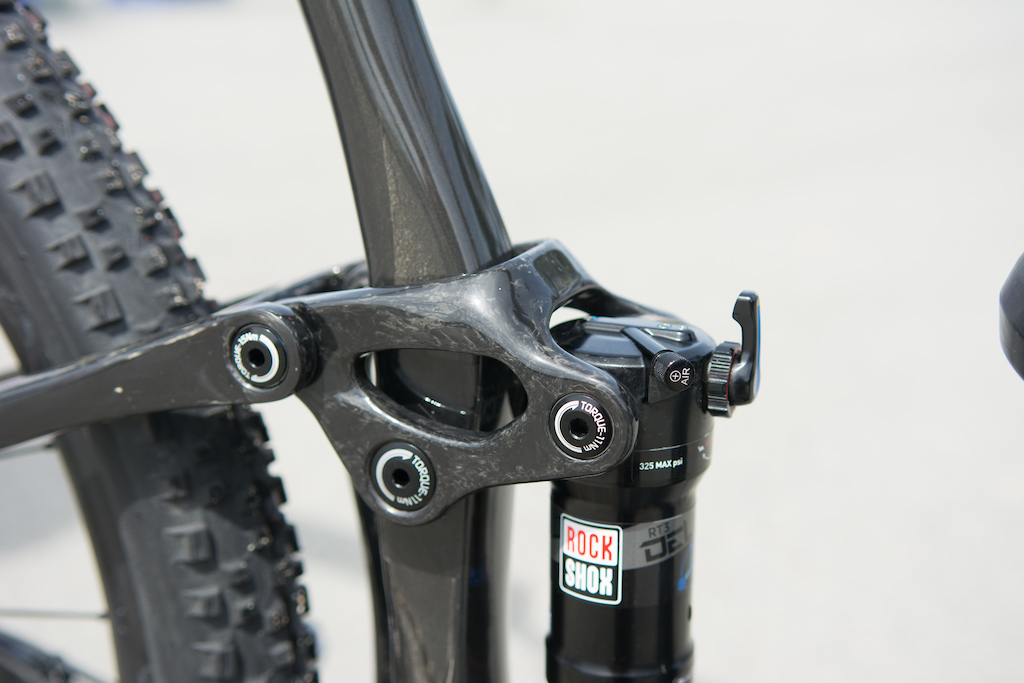 
We're starting to see more and more XC racers experiment with dropper posts, typically ultra-light options with a scant 40 or 60mm of travel, but the Anthem was designed with a rigid seat post in mind. That's not to say you can't run a dropper – you can, but it'll need to measure 27.2mm, which isn't as common of a size. Full details about the Anthem should be announced in June, with availability beginning sometime in the fall. 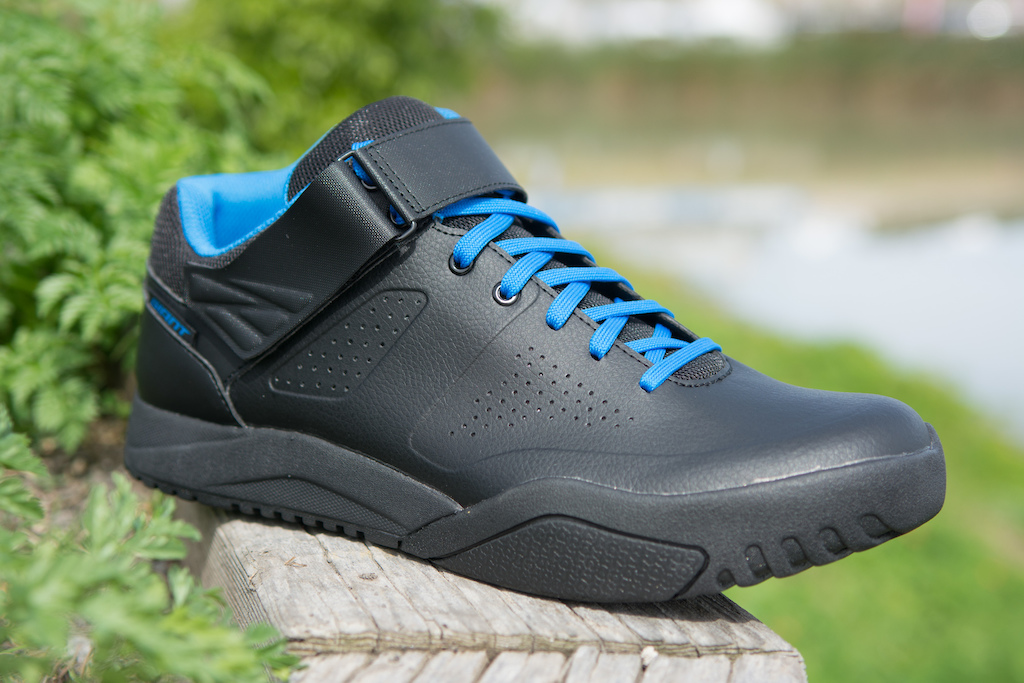 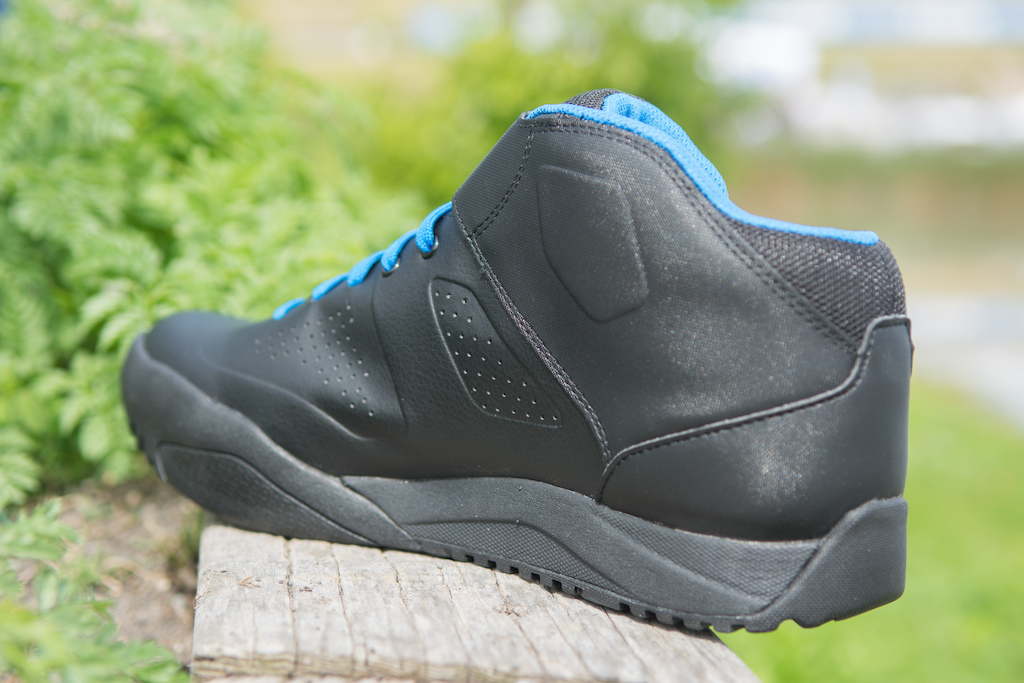 On the other side of the spectrum of riding styles, Giant has two new shoes in the works aimed at all-mountain and DH riders. Along with the the typical goal of finding the right balance of comfort and sole stiffness, Giant is working to make the shoes as water resistant and quick drying as possible. Nobody likes to have shoes that weigh twice as much after a few laps in the rain, which is why hydrophobic materials are used wherever possible. According to Giant's Jeff Schneider, the weight of the DH shoe only changed by 30 grams after it was soaked in water. 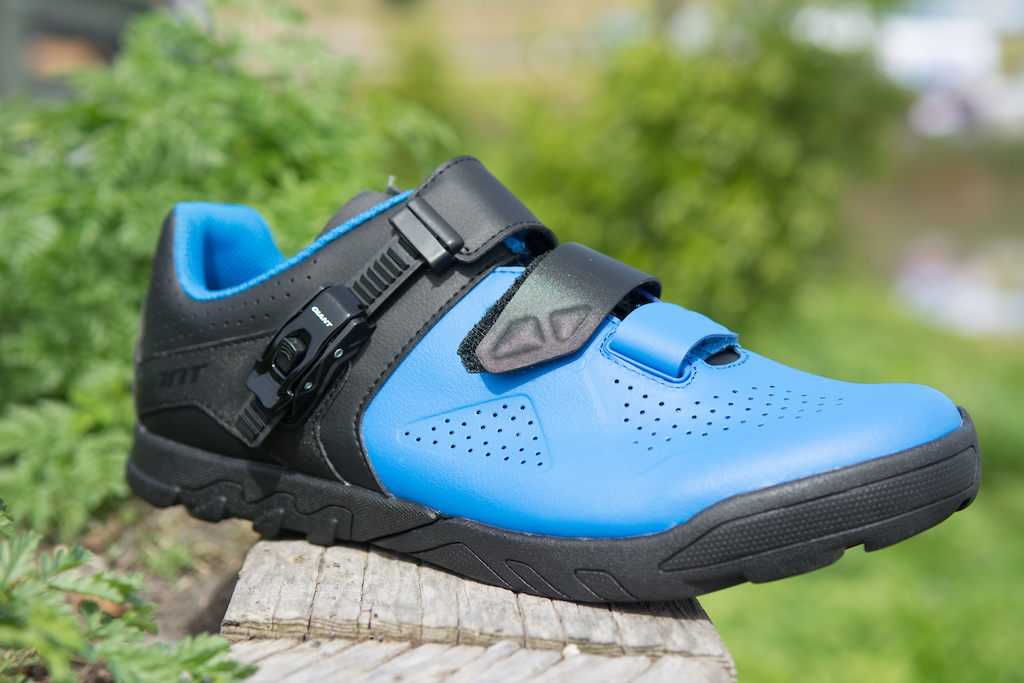 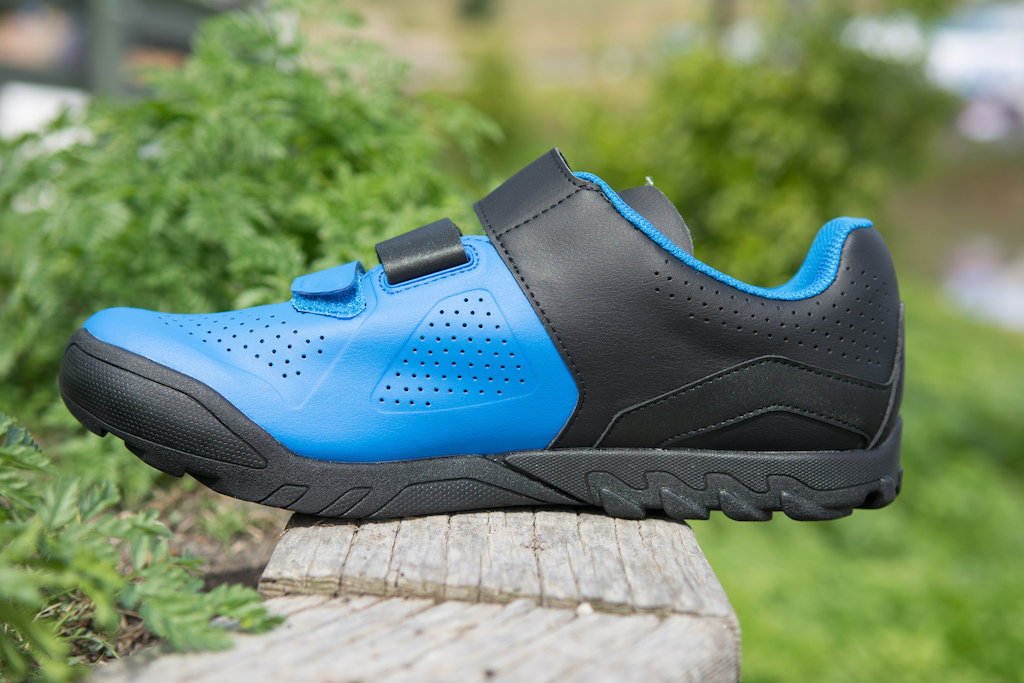 The DH shoe is a lace-up affair, with a velcro strap over the top of the foot, and an asymmetric cuff for extra ankle bone protection. The all-mountain version currently uses two velcro straps and a ratcheting upper strap, but the final design isn't set in stone – Giant may tweak it a little bit before the official unveiling later this year. Both models are designed for use with clipless pedals, but a low top flat pedal version may end up being added to the mix.


Visit the high-res gallery for more images from this article.

J-Fletch (Apr 23, 2017 at 6:06)
Haha, yeah. The first pair could seriously pass as basketball shoes. Though I am a die-hard 5.10 fan, I love how Giant designed the ankle support. The rising arch along the inside to help prevent you from folding your ankle abnormally...pretty unique, pretty cool.

@Clarkeh just meeting the demands of the market is exactly what they're doing. Which is fine. Just pretty funny after all the articles, with diagrams, graphs, charts about how they're the only ones onto it. what is interesting here is the carbon rear end, that's neat and brings a little bit of excitement to the brand.

At least they're able to admit when they're wrong, I suppose.

OzarkBike (Apr 24, 2017 at 8:08)
@headshot: How are they eating their words? Giant never stopped selling 29ers. Why all the comments about Giant quitting 29? The only bike that went away was the Trance 29er. 2 models of Giant Anthem 29 is still in the 2017 catalog. They also introduced 6 new 29er hardtails last year for the 2017 season. Giant is simply updating the current Anthem 29 to full carbon and Boost, metric, etc.

headshot (Apr 24, 2017 at 8:12)
@OzarkBike: I never said they stopped. I think its more about the hype with which they promoted their 27.5 offerings which the press and pundits took to be an indication of which way Giant saw the wheel size wind blowing. It seems the wind is changeable...

tomcreber (Apr 24, 2017 at 10:16)
@OzarkBike: They pretty openly condemned 29ers for a few years, they even stopped making the xtc advanced in 29, which was pretty much THE bike in their range that needed to be 29

The pendulum is swinging back to 29 this year it seems, with lots of enduro and trail bikes on wagon wheels. As an engineer that works in product development, I laugh at how this is going down and try not to hate.

bonfire (Apr 24, 2017 at 15:48)
@cajohnst: I agree. Super funny stuff. It is this article with the graphs and charts and so many words that I'm referencing in my first comment.

mikekazimer Mod Plus (Apr 24, 2017 at 15:54)
@cajohnst: You and me both. When that article came out I remember thinking this line from Giant was especially funny: "Bikes with 27.5-inch wheels displayed some of the best characteristics of 26 and 29-inch wheels—but without the compromises associated with each."

They're years behind at this point with a brand new Trek Top Fuel, Cannondale Scalpel, Scott Spark all coming out in the last year or two. Though this makes sense with their expanded UCI XC team since there was no way those guys were going to run hardtails all year...

The chain stays look a bit shorter maybe about 435-440mm and the head angle is a bit slacker than the older 29er Anthem.
Will be interesting to see the weight and final angles. But why did they reduce the rear travel?

bvwilliams (Apr 22, 2017 at 17:08)
Looks like this one goes more true XC to leave room in the lineup for a modern short travel trailbike

wildbill14 (Apr 22, 2017 at 19:19)
To keep the chainstay length shorter on the Meastro suspension and several other suspension designs, they have to shorten the travel without modifying the seat tube too much. Glad to see they are finally filling in that XC gap that has been missing for awhile.

anthony3vans (Apr 22, 2017 at 15:13)
Shoes look like shimanos, but in a good way.. what's with the nutcracker top tube? Kinda thought it would run two bottles with that roadie-esque stand over.

foxinsocks (Apr 23, 2017 at 21:23)
Welcome back giant 29er! The old one was a blast to ride, and actually converted a 29er hater like myself. Not many 29er designs were introduced so relatively early and stayed unchanged for 5-6 years, and that says a lot! The 27.5 version was far from reaching its' older brother's performance and reputation. So i say - welcome back!

fossleaf (Apr 22, 2017 at 16:48)
Keep the all mountain shoes with the ratchet and velcro please. I'd like another option that isn't moving towards boa or laces.

tlestrell (Apr 22, 2017 at 16:14)
Funny that, I had an old Alu Anthem 29er for a few years, and now I'm on a 29er Anthem Advanced since a year and a half, but I've never had any issues with frames cracking. I did have two of the 27.5 Anthem Advanced in between, and the first one of them cracked in that area... I also ran the new 2017 Anthem 27.5 for a little while, but to me that just simply did not an XC race bike, as it was too slack, too heavy and seemed to lack the small bump compliance that's been so great with the other Anthems. Hopefully this is the bees knees!

iamamodel (Apr 22, 2017 at 21:33)
@OzarkBike: many people cracked theirs and they didn't know because they didn't know where to look. Many blamed the creaking on the press fit BB. Have a look for a vertical line on the seat tube behind the shock. Have a look for cracked paint around where the rocker pivot inserts into the seat tube. There are few people on earth who have had as many Giant mtbs as me, so, again, but I would be the biggest knob to let anyone buy one without warning you of the problems Giant won't tell you about. Downvote me for trying to help out complete strangers.

Fix-the-Spade (Apr 22, 2017 at 14:54)
This a bike for people with calves more than twice as big as their biceps. It has just enough travel to keep the wheels gripping while they put down more Watts than an entire herd of Flymos.

wildbill14 (Apr 22, 2017 at 19:27)
I see major improvement over the older Anthem. The older anthem had the longest chainstays in the industry at 18.2 inches (462mm) and this looks to be more in line with the latest designs with 17 inch (432mm) chainstays. Also I imagine the HT angle is closer to 70 degrees or slacker over the 71 degree of the older frame. The older Anthem felt like you were pulling a trailer around with those chainstays.