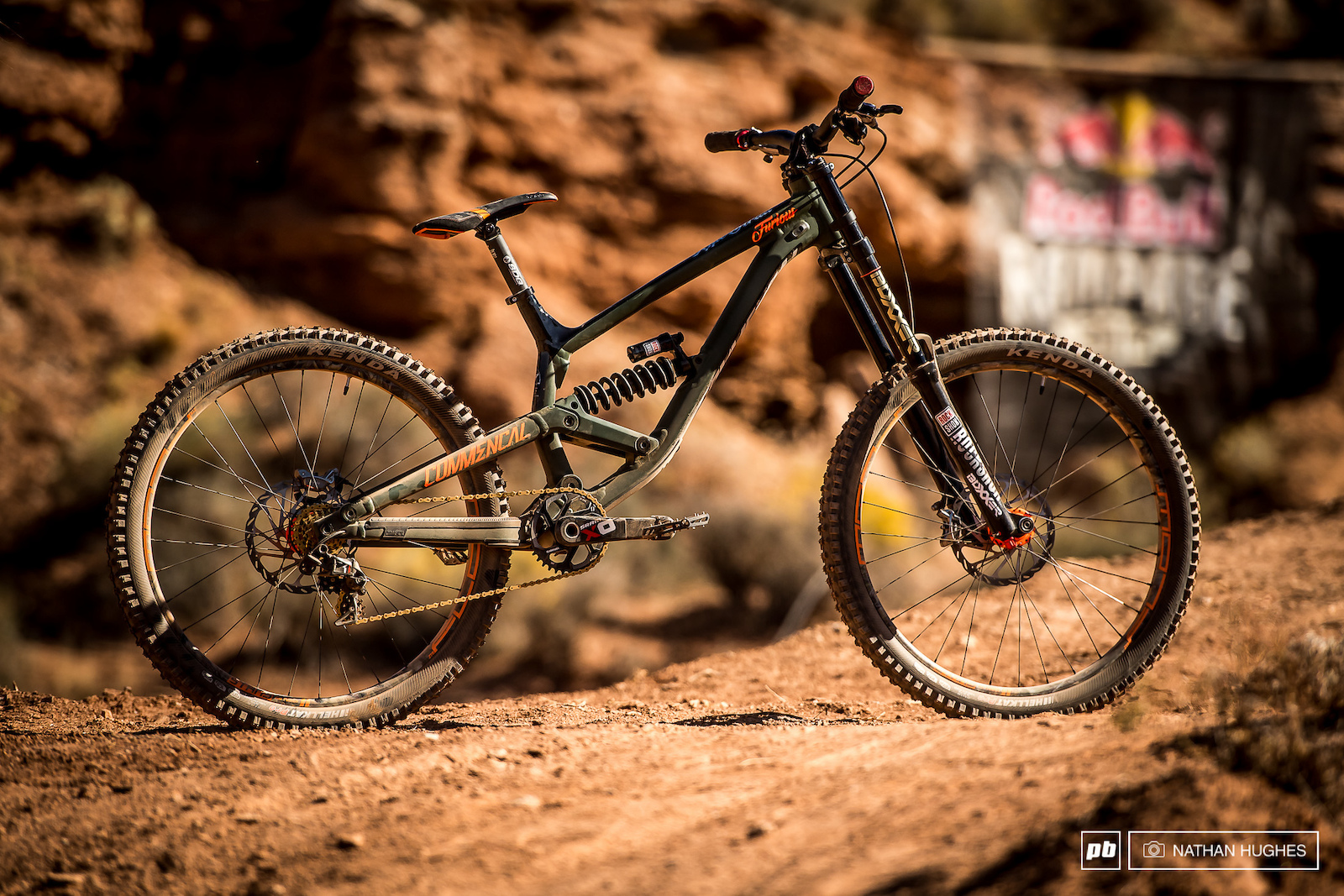 Kyle Strait's no stranger to competing at the Red Bull Rampage - in fact, he's been at every single one since the event began back in 2001, when he rolled up as a 14-year-old grom. His impressive streak has been punctuated by two wins, in 2004 and 2013, and if anyone has what it takes to deliver the mix of technical riding and slopestyle trickery that the modern Rampage demands, it's Kyle. 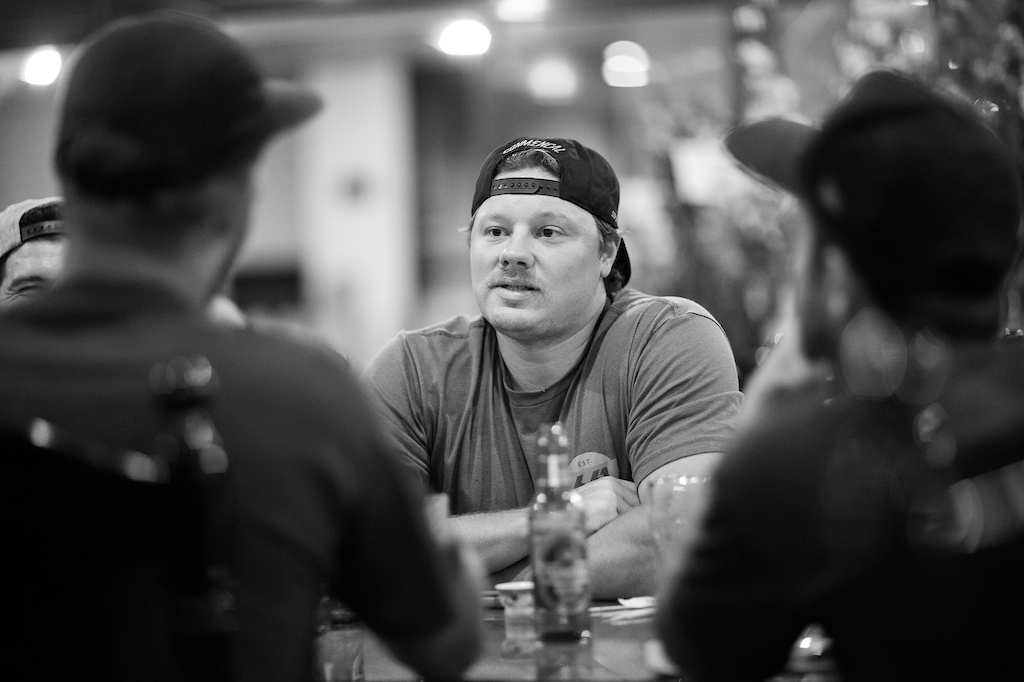 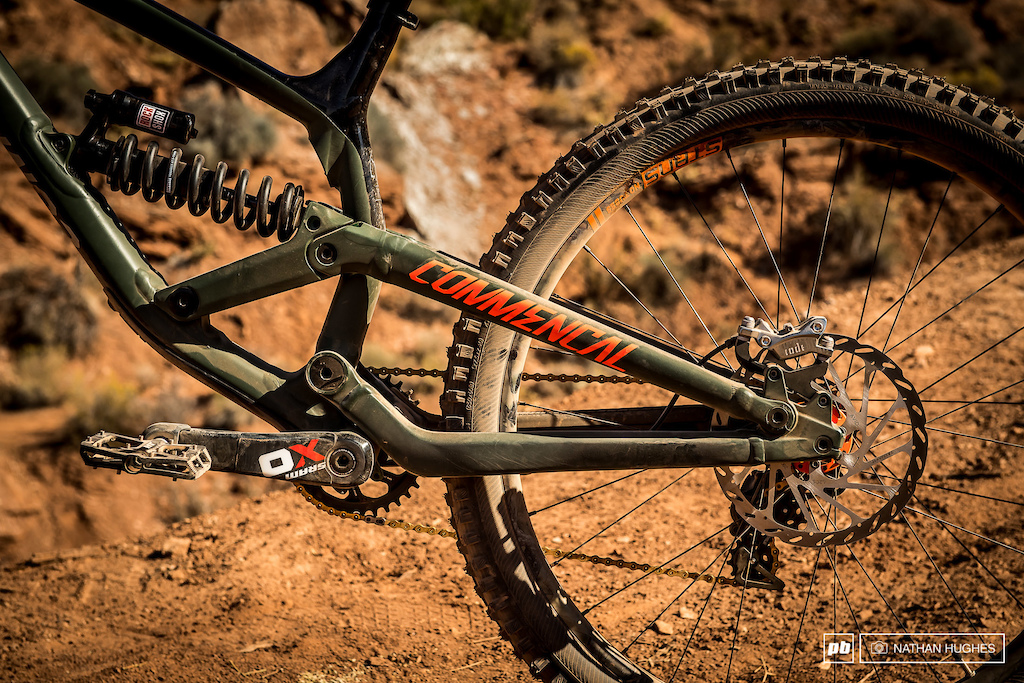 With so many Rampage appearances under his belt, Kyle knows exactly how to set up his suspension for the monster hucks and steep, loose chutes that make the terrain surrounding Virgin, Utah, so unique. Kyle's built like a linebacker, and it's it's almost as easy to imagine him moving refrigerators or tossing bales of hay as it is to envision him throwing big suicide no-handers. For that reason, his bike setup would be much too stiff for most riders, but it's perfectly tuned for his weight and riding style. There's a 600 lb/in spring out back, and up front the RockShox Boxxer is set up with 105 psi and 5 tokens.


The frame itself has also been customized with an additional brace on the swingarm in order to add the stiffness and stability that'll be required when Kyle drops into the massive straightline he has lined up from the very top of the venue. 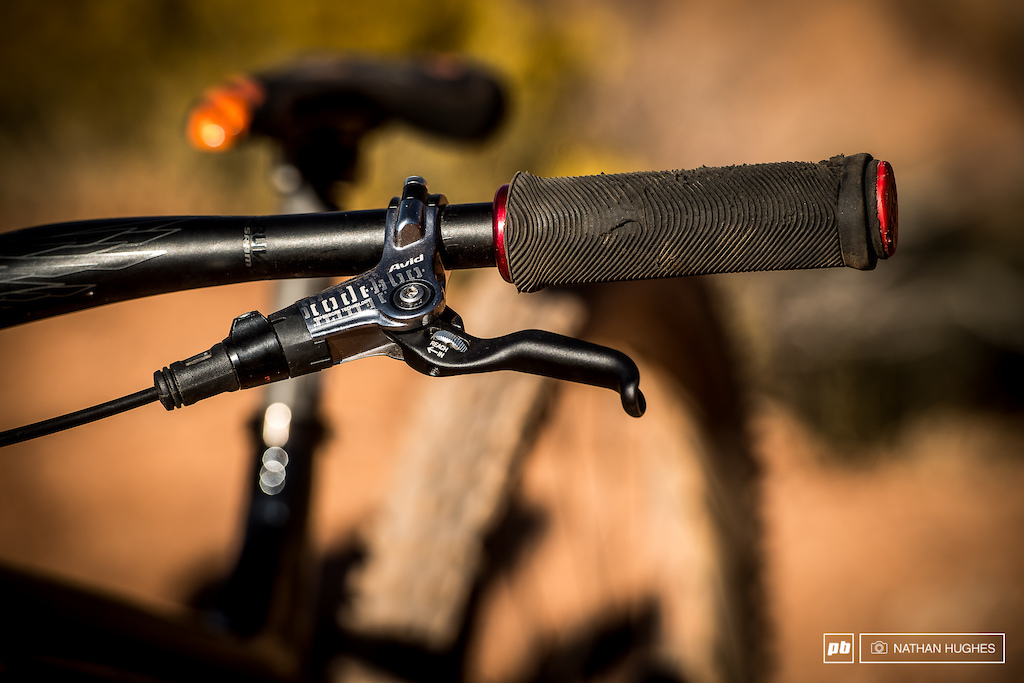 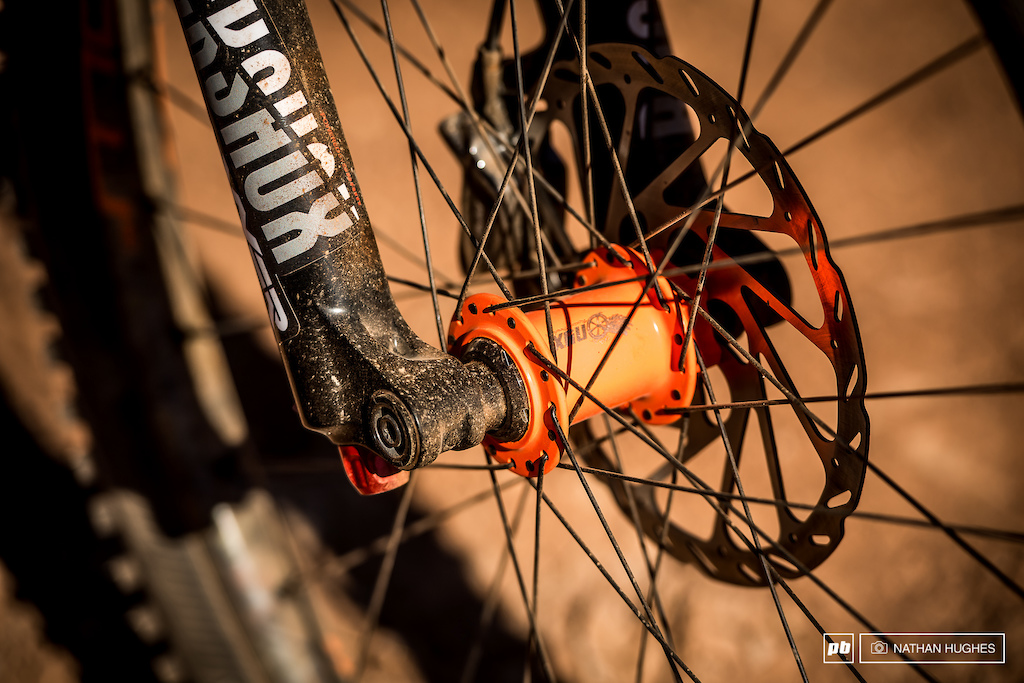 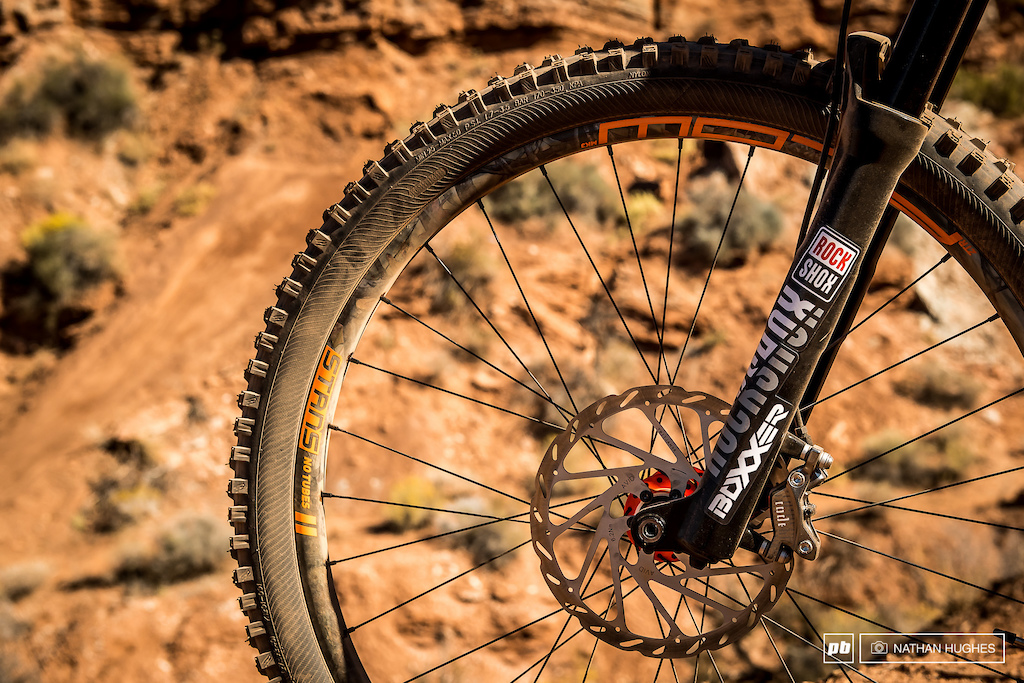 Blaze orange Onyx hubs are laced up to Stans rims that have been customized with a RealTree camouflage pattern.

Kyle has switched over to a tubeless tire setup this year, with Kenda's new Hellkat rubber mounted up front and back. The front's inflated to 40 psi, and the back to 45 psi. 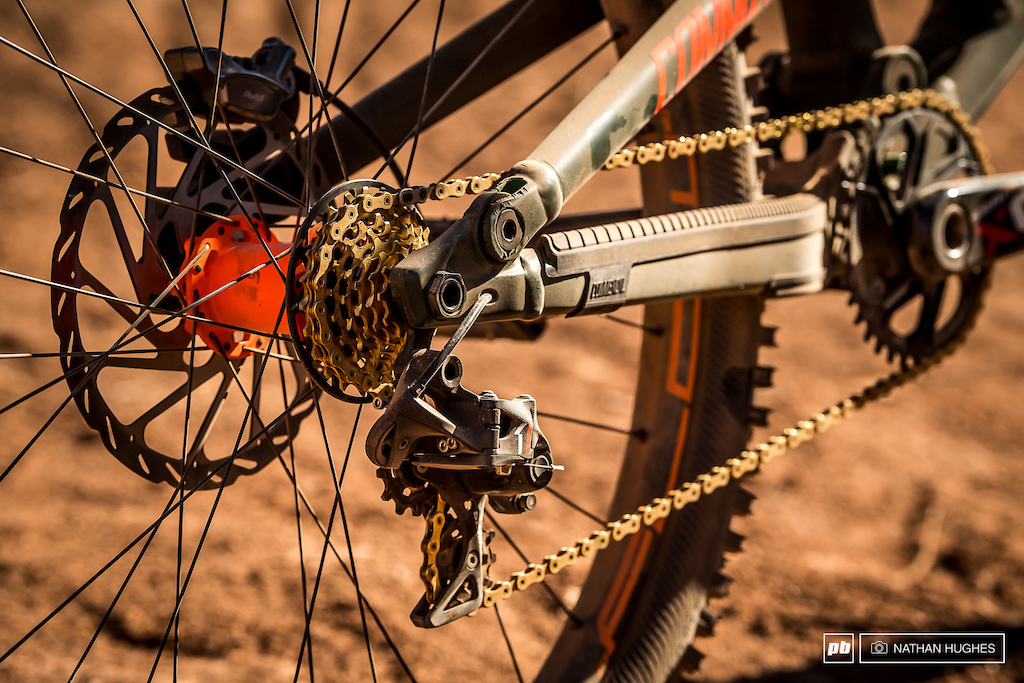 There's a minimal amount of pedaling in Kyle's line, but when it's time to turn the cranks a gold SRAM X01 7-speed drivetrain will be waiting. 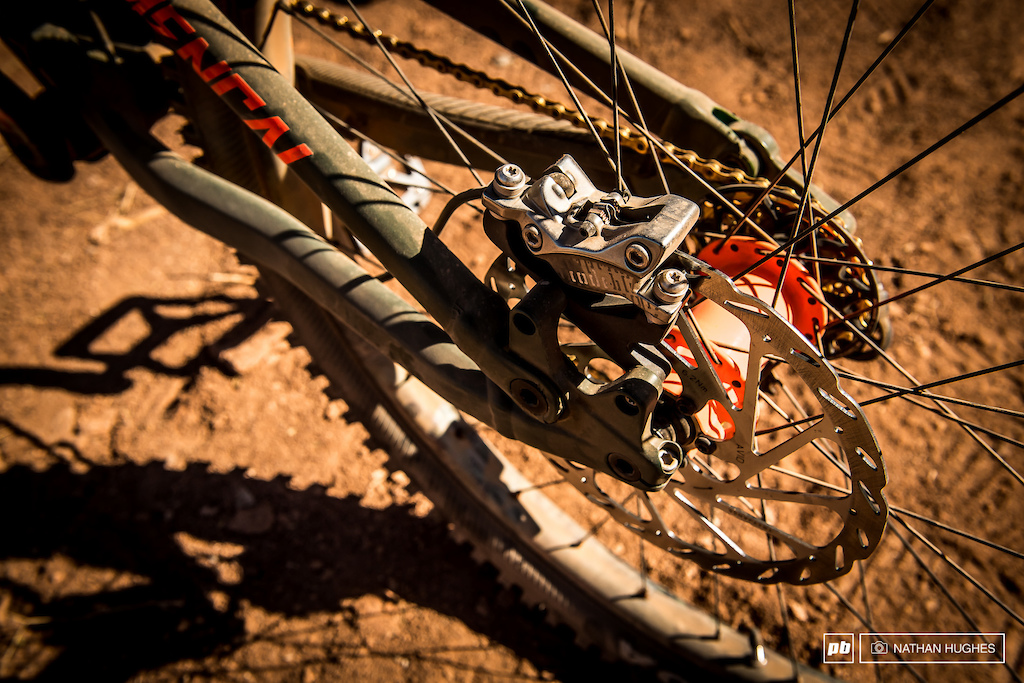 The previous generation Avid Code brakes have been installed to help keep Lyle from breaking the sound barrier. 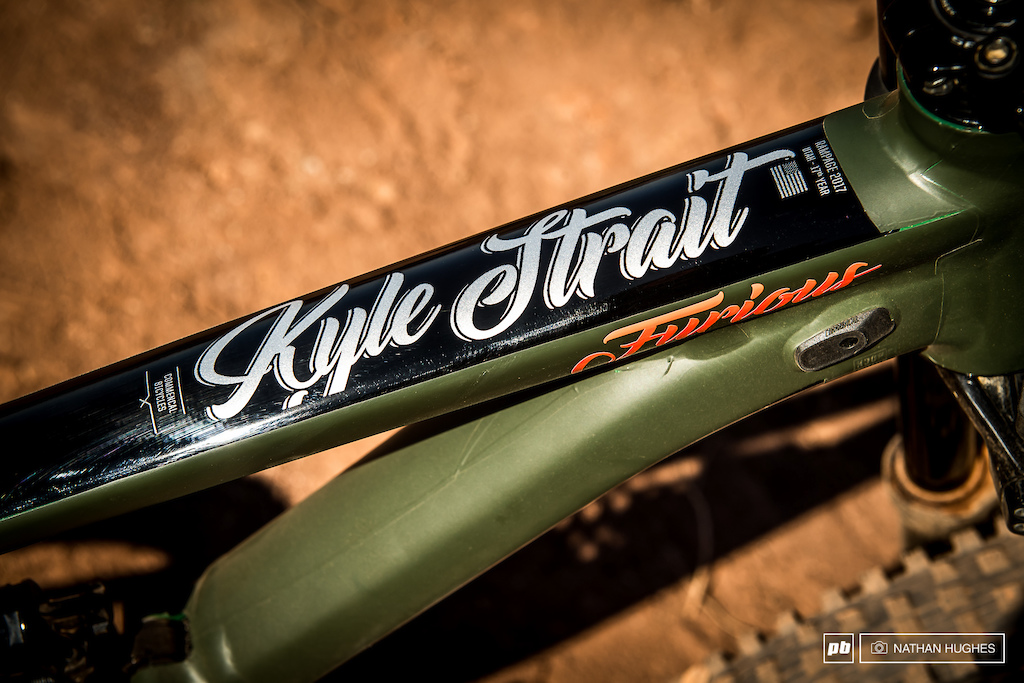 JamesOliver (Nov 3, 2017 at 3:21)
There's a brace on the seat stays connecting the two sides together before the seat tube, there's a photo in the album where you can just see it.

abennett219 (Oct 26, 2017 at 12:25)
It's more so he doesn't rip his tires off the rim if he lands a bit skewed off of one of those massive drops and so it doesn't squirm around under compression on the kickers.

SonofBovril (Oct 31, 2017 at 5:07)
Many Slopestyle guys ride pressures like that on their slopestyle bikes even.

AdustytrunkMonkey (Oct 26, 2017 at 11:54)
Sweet build! That's why I continue to use Stan's Flow rims... If they can hold up to Rampage, then they can hold up my amateur ass! No need for me to buy into this carbon rim craze!

fercho25 (Oct 26, 2017 at 12:29) (Below Threshold)
you do realize pro athetes break shit all the time, specially rims they obviously dont post about it on instagram. and they can use any brand because breaking it means it does not come out of their pockets.

Rucker10 (Oct 26, 2017 at 12:40)
@fercho25: What's your point man? Dude is obviously saying that if the rims can survive a run down the Rampage course without folding over it can probably survive whatever he's doing. Surviving a single run at that extreme is probably a pretty good baseline for all of us mortals I would think.

phalley (Oct 26, 2017 at 15:23)
Got some Stan's Flows. The front tacoed in 3 months, the rear is beyond truing at the end of the season and I had to bend the rim flanges back into place to get the tire bead to seat after a day in the bike park. Going back to DT Swiss.

I’ve had Flows and if I ran them that firm I wouldn’t have had all the flat spots I got but traction would have been shite. I’ve got nothing against them tho.

Would like to see more of this. Pro setup for such an extreme event is a curious thing.

Some would say Kyle may get free rims so what the hell. But a free rim that breaks isn’t doing anyone favors. I’m surprised a Flow is run under such a gnarly and big rider for an event like this but damn Kyle knows better than us.

phalley (Oct 26, 2017 at 15:59)
@Rucker10: I built them. I also built my DT rims, and after an initial re-tension I haven't had to touch them for 6 months. Same hubs, same method, same spokes, same bike, same rider. Flows deflect under impacts like they're supposed to, they just don't always return back to shape.

bmxRC009 (Oct 27, 2017 at 5:34)
@phalley: Same story for me, more dents and bends in MK3 than anything I've ever rode. The real kicker, due to the low profile, is they don't just get a small ding in the bead on a hard hit, the whole damn thing bends and flat spots! I'm not saying some of those aren't my fault for riding too fast on a trail I don't know, but seriously a rim should not bend that easily. 25psi front, 28psi back

fercho25 (Oct 26, 2017 at 12:32) (Below Threshold)
what I dont get is that he has been doing that for years. sensus should make him some gigantic ones just for him rampage is without a doubt the biggest piece of advertisement they get all year.

robdpzero (Oct 30, 2017 at 14:53)
@fercho25: yeah i would have thought the same, 10 years is a long time, maybe sensus thought there wasn’t a market for fatter grips. problem is getting enough circumference without it being annoyingly heavy. superstar did wide grips. gangster sh*t gets +43 wow..,

Otago (Oct 26, 2017 at 13:07)
@Bomadics: Foil covering an entire bike frame must an exercise in frustration. Why wouldn't you just paint it? Does it ever turn out well?

Can't remember who it belonged to, but someone this summer had a demo 8 wrapped in a bunch of photos, looked amazing.

Bomadics (Oct 26, 2017 at 14:03)
@Otago: Yes for sure, for two examples search Dean Tenant's bikes, I did not wrap them a shop in Victoria did, but they are both excellent, one frame appeared in Higher Calling 2

I have done a few partials as sponsorship, and one for my son, there are always seams, but hiding them well is the key!

My Son's old bike, a partial wrap to hide all the original colours, we went all black and blue, the black is satin, and the blue is all gloss
www.pinkbike.com/photo/13341096

Kyle's Commencal is also a partial wrap, the black is left original and it looks like they covered up a green metallic flake with the matte. The ideal wrap will hide the seams underneath or in welds and joints.

On my Instagram feed there is a Santa Cruz V-10 I did for a local ripper I sponsor with all the turquoise taken out with orange and black, then customised the wheels and shock, added clear paint protection film to the forks, downtube, chainstays, all rub spots and cranks too.
www.instagram.com/p/BSTtopKDVl4/?taken-by=designsnanaimo

polarproton (Oct 26, 2017 at 21:50)
@Otago: I got to talk with a painter when I wanted to custom paint my single speed. He was the commissioned painter for the HD shop and was doing helmets as well, stunning work.

Basically, the guy said that painting a bike frame is a nightmare. The tubing being so thin makes the paint very prone to drip/move before drying, ruining the design. Helmets are overall easier in that they feature larger curvature radius. Another thing he told me and that I wasn't expecting was that there was a lot of loss in the painting of a frame. Since tubes are thin, you lose a lot of paint by going over them, rather than an helmet and gas tank.

All in all, I believe wrap is the best answer for complex yet repetitive patterns cost and time wise.

Bomadics (Oct 27, 2017 at 11:18)
@polarproton: Actually I got a frame powder coated a while back and it was very cost effective, and stronger than paint. It was about $150.00 to get it sandblasted and powder coated. Way cheaper than it would be to wrap.

For complex patterns though, yes wrapping would be cheaper than a custom paint job.

polarproton (Oct 27, 2017 at 12:09)
@Bomadics: Yes, I was talking about parterns//drawing.
I eventually got my frame painted by a car painter. A slightly tweaked British Racing Green and got away for ~100$. The guy did a lovely job!

knoxharrington (Oct 26, 2017 at 17:41)
It continues to amaze me that so many (all?) complete bikes are spec’d with super thin grips. If someone buys a XL complete bike, it comes with paper thin grips, and said customer will have knuckle pain like K(L)yle. A smart bike company would spec grips on complete bikes that are proportionate to the size of the bike.

jaycubzz (Oct 26, 2017 at 15:41)
I yelled hi to him on the chair at crankworx this year while he was scouting the dual slalom course, he looked around confused for a second, then looked up and waved. made me feel warm and fuzzy inside

Bigernmcracken (Oct 26, 2017 at 13:14)
Kyle is the guy that shows up to ride when its light out. After the sun goes down and the Natty lights come out is when you meet Lyle.

brycepiwek (Oct 26, 2017 at 11:58)
It would be awesome to know rider weights as well for these bike checks to make better sense of the suspension settings. Especially extreme riding situations like rampage.

And why is he running the old Codes? Are the new ones not any good after reading all these reviews raving about them???

mayha49 (Oct 26, 2017 at 12:18)
He just did an adult jumping camp at Highland Bike Park. My friend took the course and was blown away by his effortless and incredible skill.

el-booto (Oct 27, 2017 at 1:32)
i approve, looks strait outta the Bass Pro catalog
@COMMENCALbicycles, can we get this added to the options on the a la carte range?

geethatsucks (Oct 31, 2017 at 4:31)
Adjusting grip sizing according to the size of your hand seems too logical for someone playing tennis and golf...

sino428 (Oct 26, 2017 at 12:26)
Its really not that crazy. Look at the lines they ride. They are very gnarly in terms is how big, steep, and fast it is, but they are relatively smooth and buffed out. They aren't hitting any roots or rock gardens out there. With clutch derailleurs and narrow wide chain rings its more than enough.