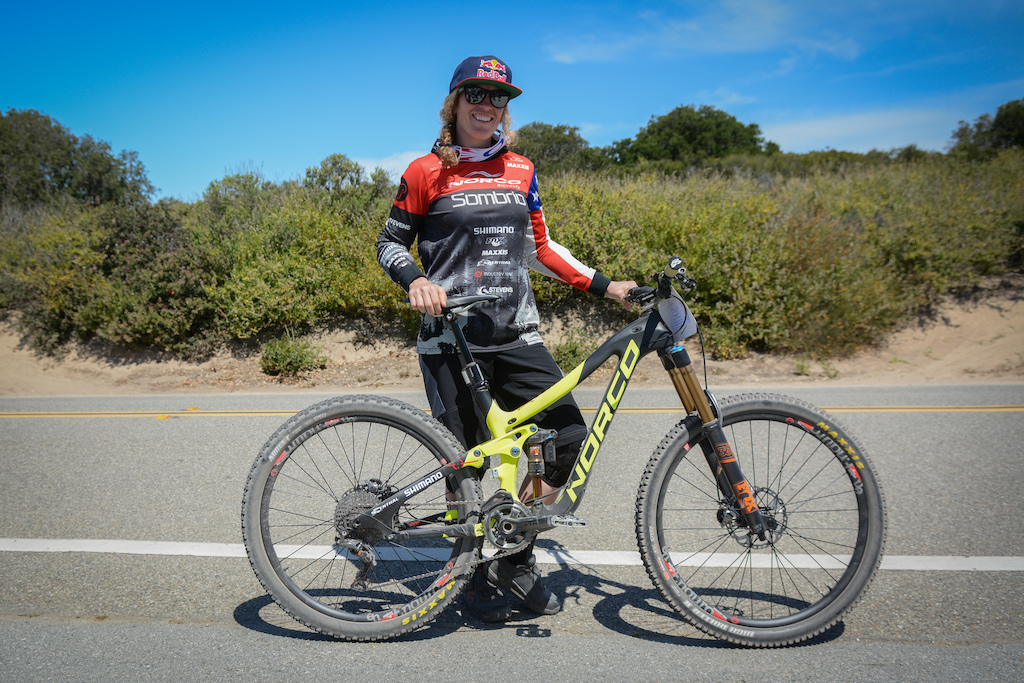 The day after winning the dual slalom, Jill Kintner took the top spot in the pro women's downhill to cap off a successful weekend of racing. The Sea Otter course doesn't exactly qualify as a true DH track, which is why most riders opt for shorter travel set ups. Jill won aboard her carbon Norco Range that's decked out with the latest suspension from FOX, a Shimano XTR drivetrain and brakes, and Industry 9 wheels. 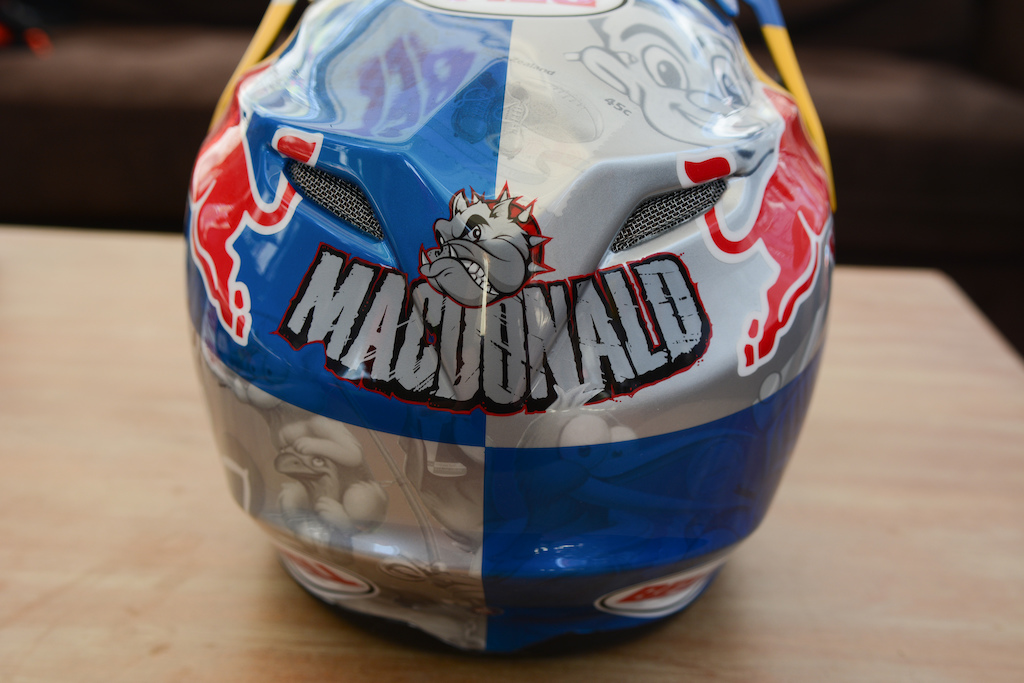 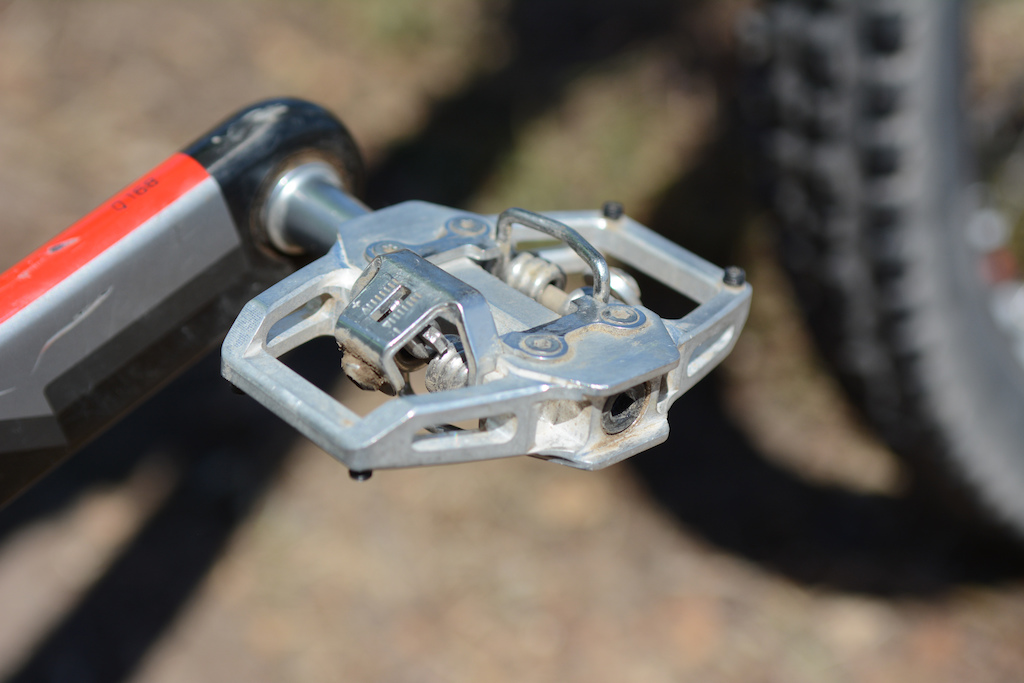 Several athletes, including Brian Lopes, were aboard a prototype clipless pedal from HT this week. The clip-in mechanism looks similar to that of the X1, but with a more low profile platform, and two adjustable pins at the front of the pedal. 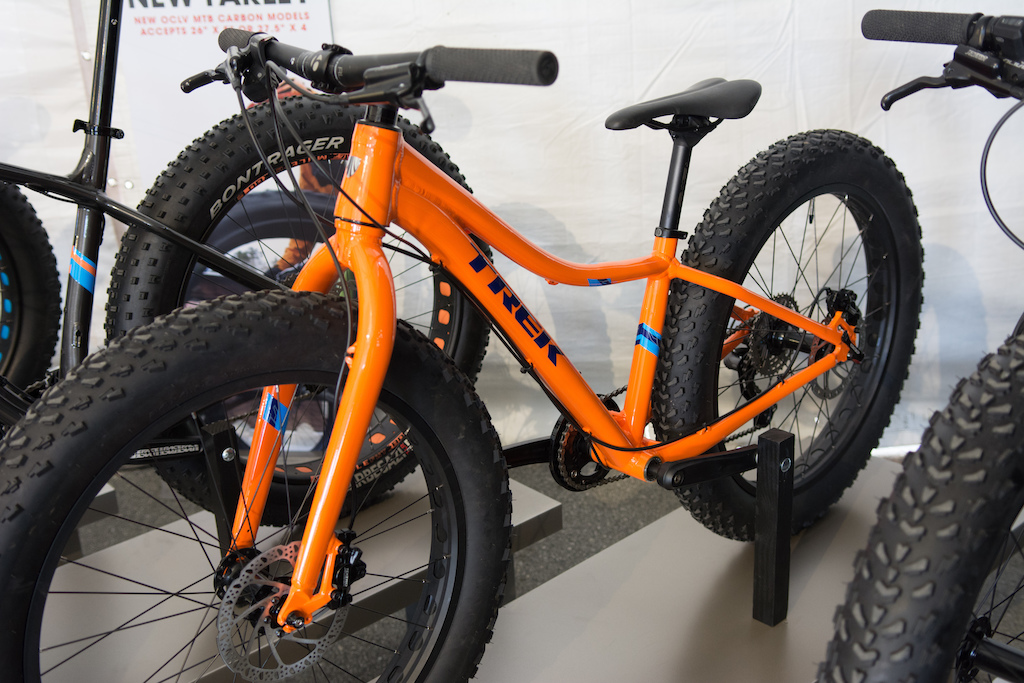 What kid doesn't love monster trucks? That's the thinking behind the junior version of Trek's Farley fat bike, which uses 24" wheels to fit smaller riders, and includes niceties like an aluminum frame, disc brakes, and a 1x9 drivetrain. 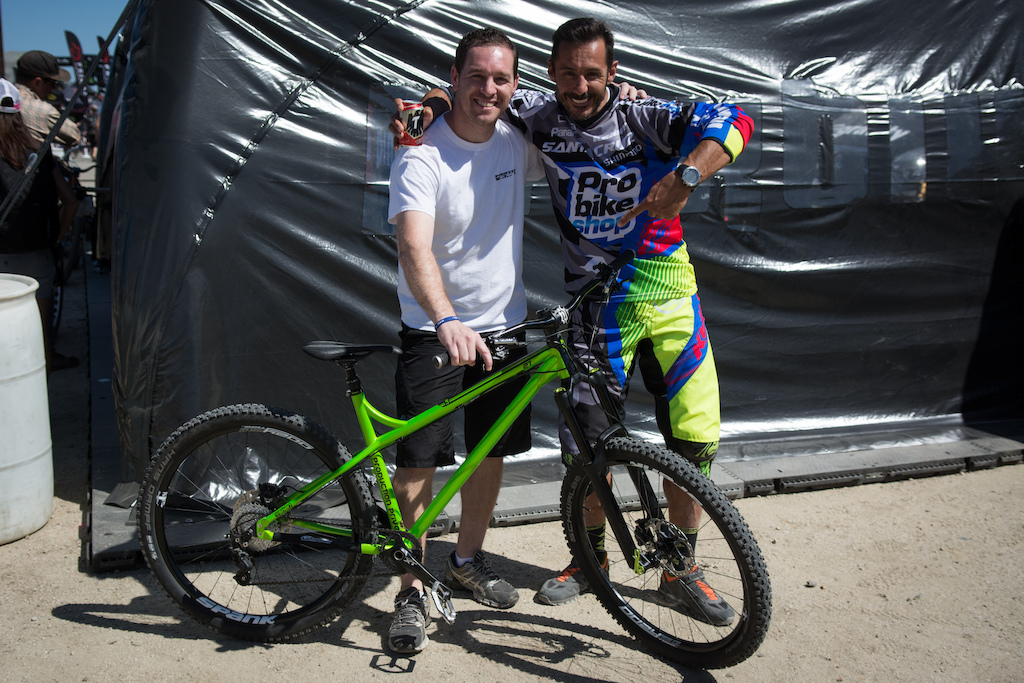 Cedric Gracia is part owner of Production Privee, the Andorran company best known for their steel hardtails, and he was on hand with Marc Caselllana of Prestige MTB. Prestige recently announced they will be the US distributor for the brand, making it easier for Americans to get their hands on bikes like the 27.5" Shan Diamond shown above. 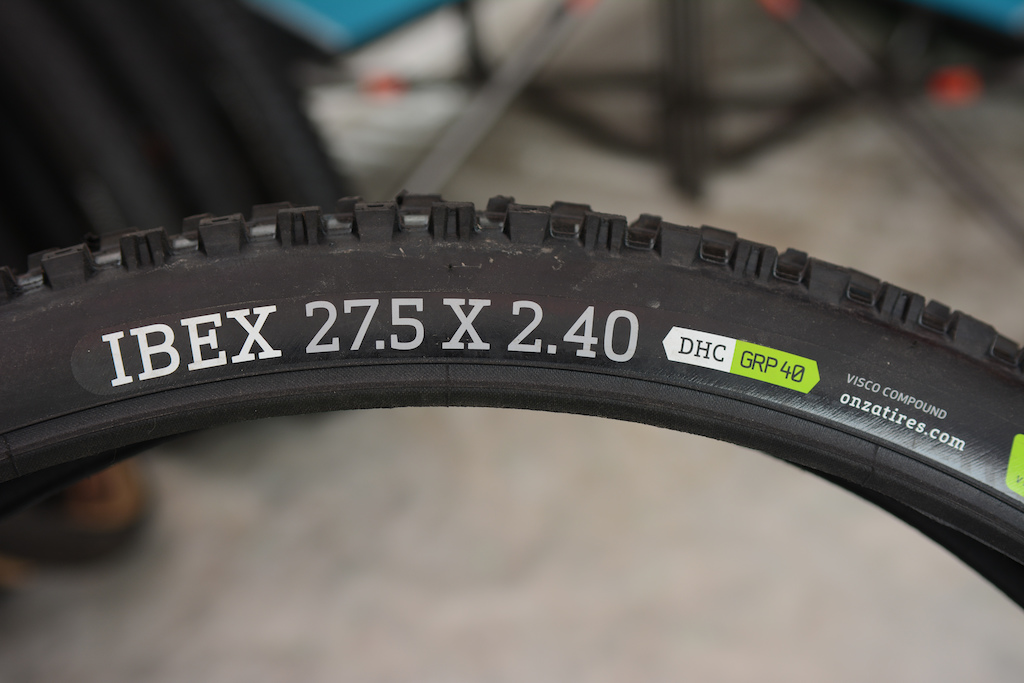 Onza has a new rubber called GRP40 that they'll first be using on their wire bead DH tires, with plans to make it an option on their folding bead tires in the near future. It's a soft, slow rebounding 40 duromoter compound that's meant to be super sticky on for extra grip in wet conditions. 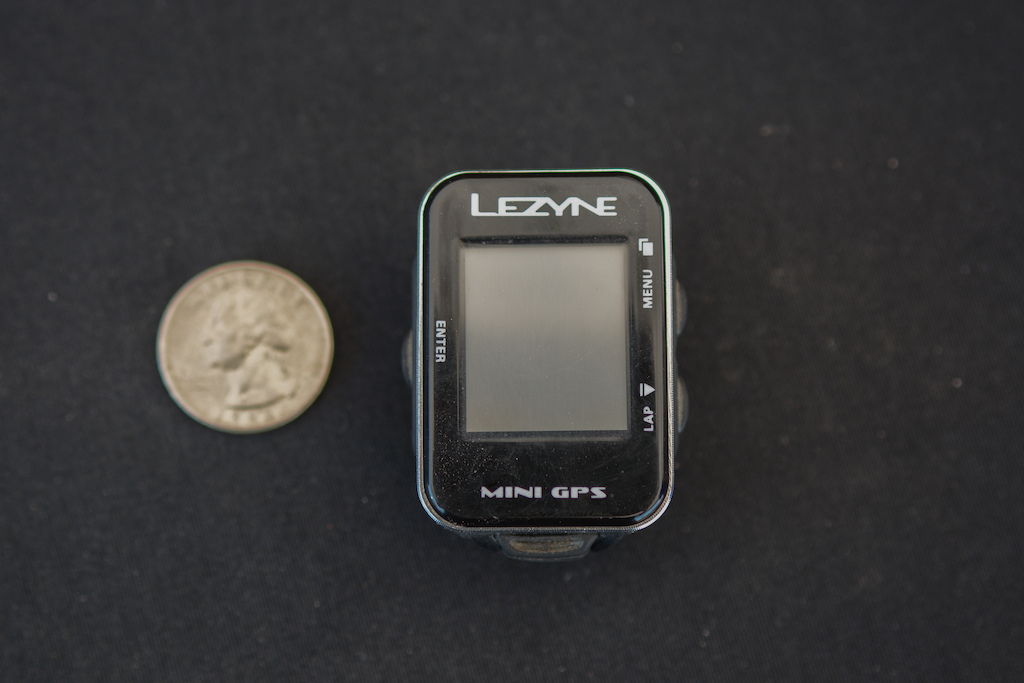 Lezyne announced their new line of GPS computers at the Taipei Cycle Show, and had the full line on hand at Sea Otter. The Mini is the smallest unit, weighing only 30 grams with a claimed 10 hour run time. In addition to recording GPS data, the computer can display time, distance, speed, and elevation. MSRP: $139.99 USD. 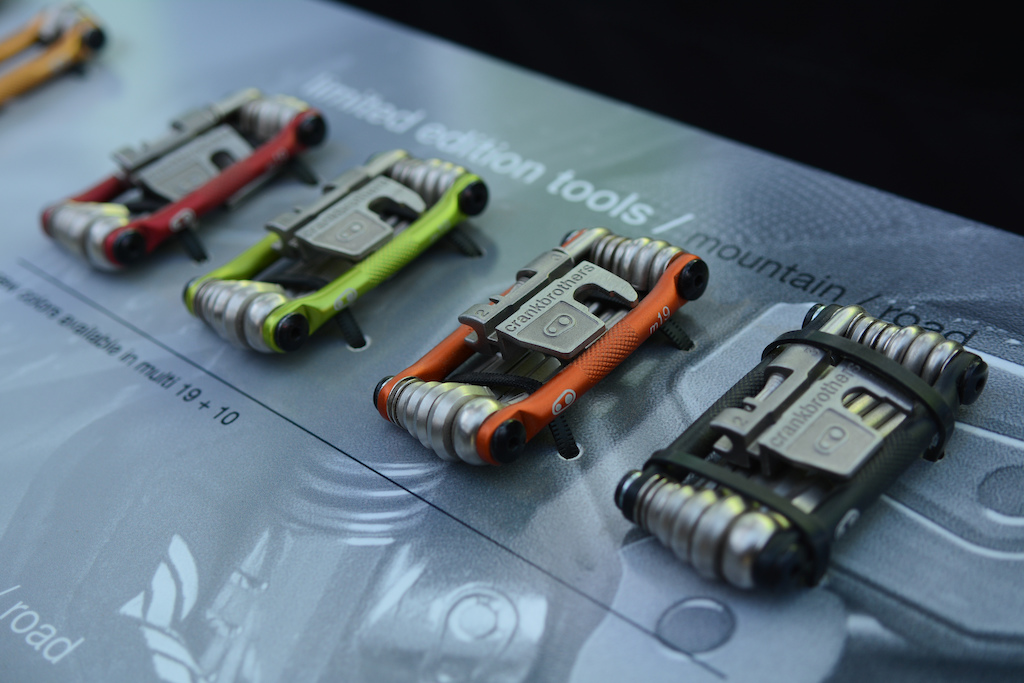 Crank Brothers has a few limited edition colors of their m19 and m10 multitools tools for riders looking to add a splash of color to their pack. 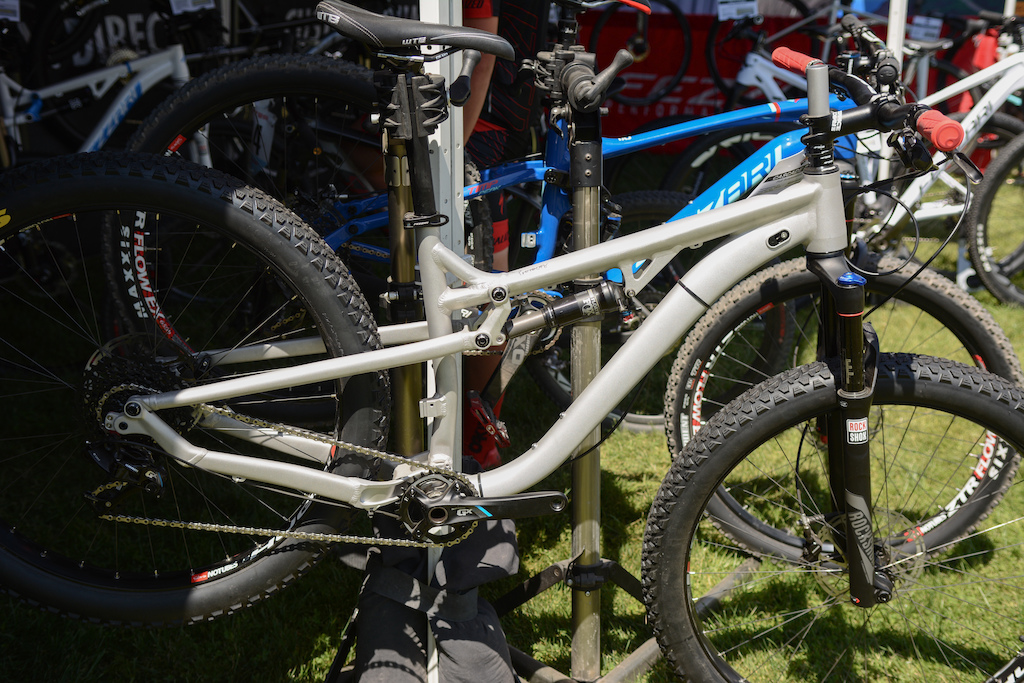 27.5+ hardtails were the big story as this year's Sea Otter, but a few companies had full suspension models out as well, including the 110mm Cascade Peak from Fezarri. 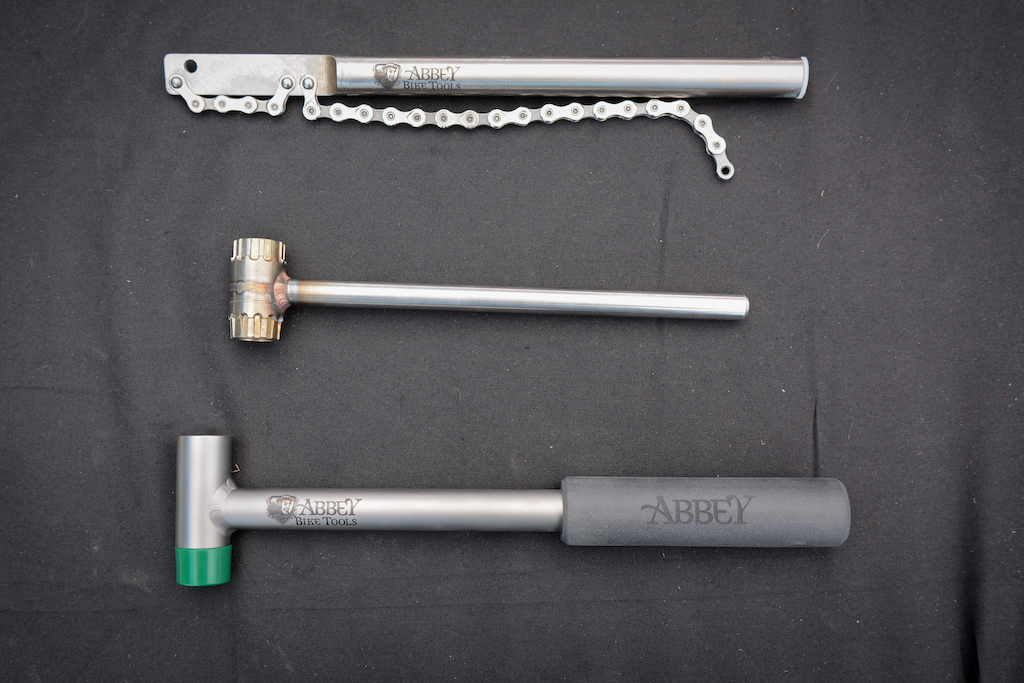 The simple elegance of Abbey Tools stainless steel chain whip ($45) and Crombie cassette tool ($50) caught my eye, but it was the titanium hammer that really made me drool. I know, no one really needs a $185 ti hammer, but as soon as I picked it up I was smitten. It's only 265 grams, but has enough heft that it'd be perfect for tapping in bearings or other bike related jobs. Based in Bend, Oregon, all of Abbey Tools' products are made in the United States. 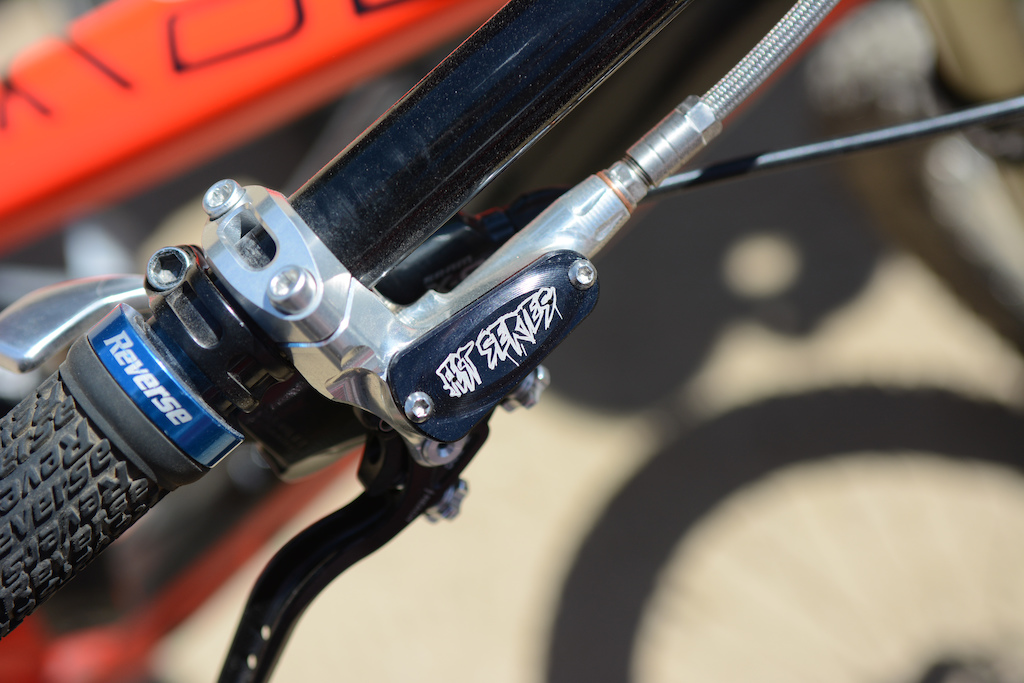 Who's ready for some serious hucking? The first stop of the Fest Series kicks off in Santa Cruz, California, and the big guns are starting to roll into town, including Nico Vink with his custom Hope brake levers.

Nico's Scott Gambler probably racks up more air miles in a season than most riders accumulate in a lifetime. 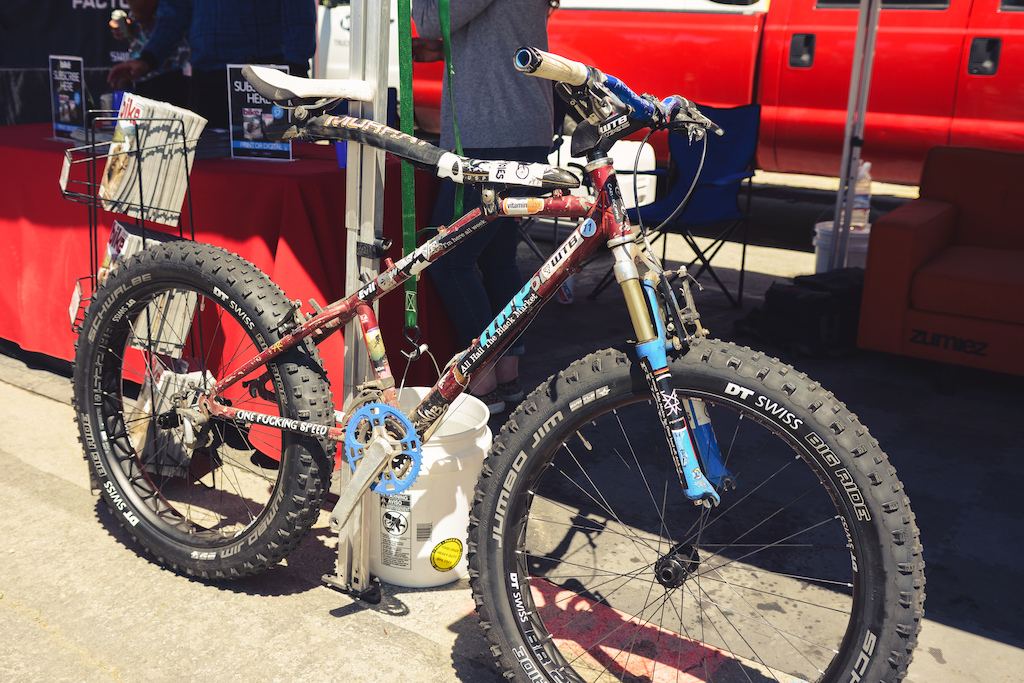 Bike Magazine's Sh*tbike has led a hard and grueling life, including being lit on fire and launched from a catapult, but somehow it seems to always show up at Sea Otter. This year it was trying to fit in with all the plus size weirdness, but it looks like there may have been some compatibility issues...

Be sure to check out all of our Sea Otter Classic images in this gallery.

Then you can spend the rest of parts or other tools, right!

njhop (Apr 19, 2015 at 19:02)
everyones perception of value is different, some would totally spend that much on tools.

likeittacky (Apr 19, 2015 at 19:18)
what if the hammer was a gift because you have been building homes for rich task-masters for 20 years and it's light weight is like Codeine for your joints. Knowing others pain without seeing the ailment.

powderturns (Apr 19, 2015 at 19:22)
i love the class warfare that exists in mountain biking. if you make more than $XX/year, please go yachting instead...

AviMoore (Apr 19, 2015 at 20:34)
^exactly. Companies will of course only produce a product if they think it will sell. Yes, the prices of many things in our mtb world are rediculous. If you cant afford it or you think its rediculous, so be it and move on with your day. Buy things you can afford, because wether you want to believe it or not, they do exist. There are people out there who will buy this stuff. So what, who cares. We all are happy riding our bikes no matter what price in the end.

codypup (Apr 19, 2015 at 20:45)
Best laugh out loud comment of the year. Sometimes the point of making something is just because you can, not because anyone needs it.

shirk-007 (Apr 19, 2015 at 20:49)
The hammer is produced for traveling pro mechanics. They fly to many of the races and need to check their tool kit. Most all of the Abey tools are designed specifically to address issues for working pro mechanics (mostly on the Pro Road tour).

codypup (Apr 19, 2015 at 20:54)
I still say they made it cuz they could, like a gold plated frame or a Dart Vader DH helmet. As cyclists, we're not exactly focused on what we "need" as much as what we "want" no one ever got rich in the bike industry selling people what they need

WAKIdesigns (Apr 19, 2015 at 23:18)
Hahaha, first comment made my day. Now seriously, it should be made out of UD carbon with one titanium end and ESI grip to hold it.

Veloscente (Apr 20, 2015 at 1:12)
Apologists making earnest pitches for a "reduced mass" hammer - you KILL me.
Making a hammer out of Ti does *not* make it a "travel" hammer."
Hammer function = mass. A 285g steel hammer would be identical in packing mass & performance.
A fool is easily parted with his money...

WAKIdesigns (Apr 20, 2015 at 4:25)
A travel hammer, yes, for psychopaths with attachment to their tools of torture and murder, but want to travel comfortably on short and long distances, just for sake of travelling or to create less traceable murder patterns. New for 2016, exchangeable end fittings including our award winning eye picker and finger splitter.

This is german quality for the next 1k years.

deadtime (Apr 20, 2015 at 8:26)
There must not be any professional carpenters who read these comments. My brother has a $200 hammer, I think it's ti. My Red Wing boots cost $320. If I have to use it for 8-10 hours every day I work I don't give a f*#k how much it costs. Having a hammer like that just for bikes isn't outrageous either. Im still using some of my Dad's tools from the 60's, because he didn't get the cheap shit.

Veloscente (Apr 20, 2015 at 14:55)
Sorry deadtime, dead wrong on Ti for hammers & most other tools: if you hit steel nails w/ a Ti hammer it will gouge the sh*t out of it. Ti is halfway between steel & aluminum on density, and it is more susceptible to shear-forces than steel, which makes it LESS durable than steel for the vast majority of toolmaking applications.
No one with a clue will dispute that professional-grade tools cost more than the consumer-grade stuff, quality materials & precision machining cost more.
There is a reason, however, why they use rust-prone TOOL-STEEL for pro-grade tools, and not stainless or Ti: even Abbey's stainless cassette lockring tool will wear faster than my tool-steel version.
Simple materials-science.

deadtime (Apr 20, 2015 at 19:11)
C'mon dude, only the shaft is ti. Does that make more sense? I've used it and it makes a huge difference. He has 3, all in different weights and he swears by them. Ultra precision and one swing nail drops all day, so he says.

Hbay (Apr 20, 2015 at 19:20)
Whats with everyones hate for a $185 hammer? Any good experienced mechanic knows the value of high quality tools. Tools are a long term investment as a good tool will often outlast its owner, a good bike part on the other hand..

megaold (Apr 22, 2015 at 8:20)
Check out Stiletto titanium hammers with replaceable faces. Lots of pro carpenters use them. The benefits of a light hammer with the durability of a tool steel striking face.

deeeight (Apr 19, 2015 at 17:09) (Below Threshold)
Actually its already been said by some famous people... Dave Turner for one. He showed up to Sea Otter with his personal one.

lennyandcarl (Apr 19, 2015 at 17:47)
Maybe the government will regulate sales and advertising of 27.5+. I mean after Schwarzenegger went public riding that fat bike, its open season.

paulclarke (Apr 19, 2015 at 21:22) (Below Threshold)
Cigarettes were first sold commercially in the mid 1800's when science was almost nothing. Now we have computers (or common sense) to say bigger wheels roll over sh*t better. If you don't want to see 26" go bye bye than you a hipster who wants to stand out while using old technology with disadvantages over new.

Nukeproof40 (Apr 19, 2015 at 17:27)
So went riding today and counted six fat bikes, yes I'm in Michigan. But the snow is long gone! Oh yeah it would seem rolling resistance goes out the friggen window. Just saying! And I ride a 26", thank you very much.

deadtime (Apr 20, 2015 at 8:39)
In Chicago area fatties are gaining fast. Every year at my trails (Oswego) there are more and more. Some are new riders but most are long-time riders anywhere from late 20's to 50's who already have sweet rides. Some of these bikes are in the $6k range.
Along with the 29ers the fatties are changing my trails. The sharp corners are now all blown out, the lips of trails that had been fine for years are now being pummeled. What was once a rock-fest is now a smoothed out trail. I'm not really complaining, I'm just noticing that the fatties are having a huge effect on trail width and trail character. (And the guy on the fatty is always breathing the hardest, just sayin')

Iamwarthog (Apr 19, 2015 at 21:04)
Because it already had the suspension fork on it, before it was "Sh*tbike", when they decided to dust it off and put it back in service for the Sh*tbike challenge.

losmarauder (Apr 19, 2015 at 17:15)
I was unaware that there were enough smaller sized folk riding sand, and snow, to profit on a 24" fat tire. But thats why I ride, and don't design bike line-ups. Hope the tires are still available a few years from now that jump on board.

bradhuber (Apr 19, 2015 at 17:23)
How bout trek starts making a decent 1x drivetrain kids bike before they start pumping out a fat bike for kids...

WayneParsons (Apr 19, 2015 at 20:29)
I wonder if anyone noticed NONE of the people actually racing use plus size tires.

"No, they all sold out by the first day!"

utahspines (Apr 19, 2015 at 21:03)
@WayneParsons who said they were for racing? They were built for comfort and traction, just like something else plus sized....

$300 hammer paid for by lunch time

fatwomenarehardertokidnap (Apr 19, 2015 at 23:13)
Bike magazines S*itbike is hanging out for a Girvin Flexstem