Jun 28, 2010 at 10:06
by Mike Levy
Tweet
Leogang, Austria, June 27th 2010 – The Out Of Bounds mountain bike freeride festival hosted the 5th anniversary of the 26TRIX dirt jump contest. 60 riders from 17 countries rocked the dirt line located next to Bikepark Leogang’s gondola station to get a junk of the overall prize purse of 10,000 Euros. Cameron McCaul (USA/1st), Brandon Semenuk (CAN/2nd), Martin Soderstrom (SWE/3rd), Sam Pilgrim (GBR/4th) and Yannick Granieri (FRA/5th) took the most points for the FMB World Tour due to the “Gold Event” status of the 26TRIX. 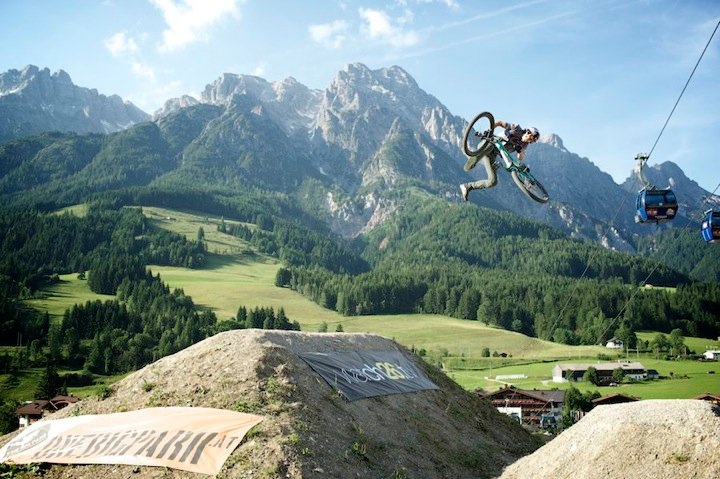 The slope was crowded on Saturday late afternoon, when the finals were about to be kicked off. The riders showed that they know a lot about competition tactics, showing their biggest tricks only during the finals. Not any of the big banger tricks had been seen in the training sessions before.


It was the Canadian Brandon Semenuk, who led after the first of two runs. He pulled a tailwhip at the first step up jump, a 360 at the step down, as well as an opposite 360 at the hip, to shoot into the “Airtime Line” (first double 11 meters distance, second 8 meters) and going big with a backflip x-up one foot and a truck driver at these two big doubles. The finished this run with a tailwhip before the last turn and a flipwhip and the finishing jump. Not an easy job for the competitors to beat this one of its kind clean run. Swedish young gun Martin Soderstrom, who crashed in his first run, put everything he got in the second one: Backflipping the step up, barspin at the step down, 360 table top at the hip, tailwhip and 360 no hander at the ““Airtime Line” followed by a no hander and a double tailwhip. But it was Cameron McCaul who proved to have the best combination of style and tricks this weekend: Backflip, barspin and tailwhip in the first section, Tailwhip and frontflip on the two biggest doubles, as well as a tailwhip and flipwhip at the end – all very clean and with extremely high amplitude. Brandon tried to get back on first position of the ranking by showing a run packed with 360s, regular and opposite, backflip x-up one footer, tailwhips, a 360 tailwhip and a flipwhip, but unfortunately slipped the pedal once and ended on second place, with only one point behind Cam. 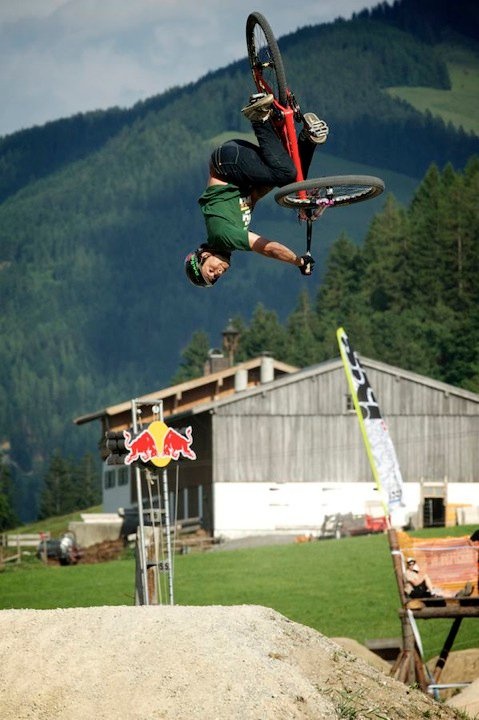 Other highlights of the finals were: Sam Pilgrim’s runs packed with backflip no handers and x-up one foots, 360 whips and flipwhips, as well as Yannick Granieri’s inverted 360 on the Airtime Line. American Kona Clump Team rider Paul Basagoitia pulled a huge superman seatgrab as well as a nice backflip x-up one foot and a flipwhip, ending on 6th place. His Spanish team colleague Andreu Lacondeguy’s riding was wild, but inspiring: he looked like the fastest and most stylish guy on the jumps all weekend, but didn’t trick the smaller jumps: his biggest moves were a backflip nohand over the step-up, backflip, superman at he last jump. The crowd screamed out loud when he pulled a trick that was something in between a backflip and a 360 flatspin, which was just huge (7th place for him). Also Amir Kabbani from Germany, who ended on 8th position, showed a great performance with backflip x-ups, 360 tailwhips and flipwhips. Sam Reynolds might have also been on the podium with his backlip at the first huge double followed by a frontflip on the second. But he messed up with the rest of his run, and landed on the 13th place. Cam’s brother, Tyler McCaul got a very special prize for the best trick of the weekend – a 360 down side whip at the last jump. Bikepark Leogang managing director Kornel Grundner handed him over 26 cans of the “TRIXX” beer from Eastern Europe, sponsored by filmer Ryys. Thanks a lot for joining and bringing the well-named beer. 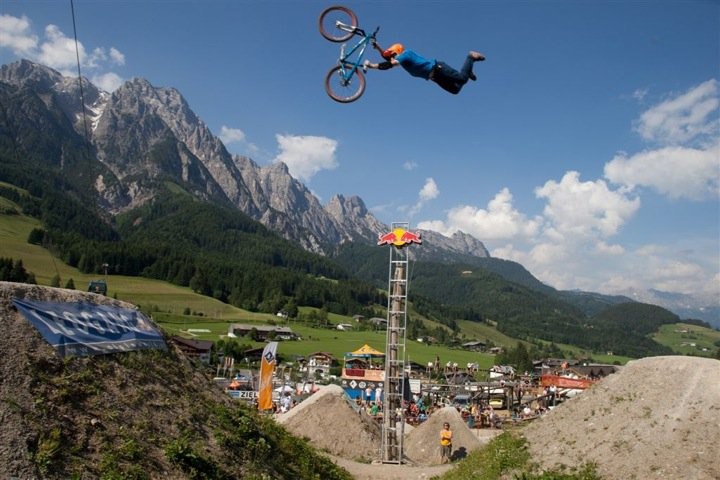 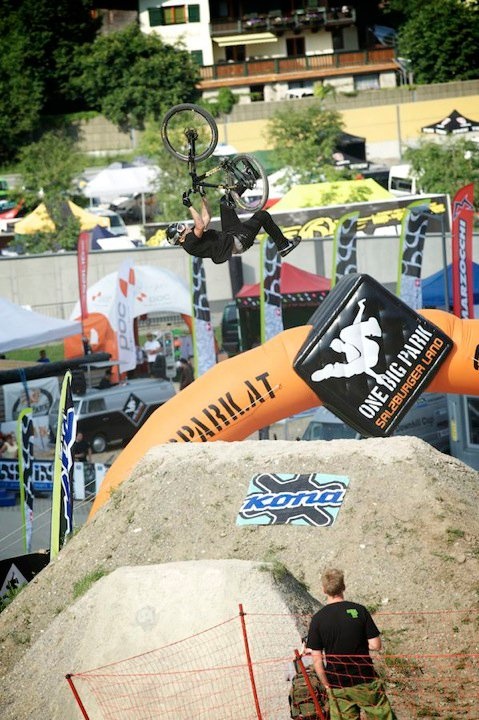 The riders were partying hard on the official 26TRIX after contest night at the Eventhall Leogang. Thanks to Bikepark Leogang, Kona, One Big Park and Saalfelden Leogang, the 26TRIX proved again to be one of the most important dirt jump contests worldwide. Watch out for the full report of the Out Of Bounds Festival including also an iXS European Downhill Cup and the iXS FourX Race, soon.

For further information about the Bikepark Leogang, its events for 2010 and the variety of available trails, please visit: www.bikepark-leogang.com

trekiscool (Jun 29, 2010 at 18:06)
um yea cam and ty are brothers they dont really have a history of winning major events though

PLEASE WATCH THE VIDEO BEFORE YOU PROP ME (+,-) YOU HAVE TO SEE FOR YOURSELF, I KNOW I PROBABLY SPELT HIS NAME WRONG BUT YOU KNOW WHO I AM TALKING ABOUT LOL