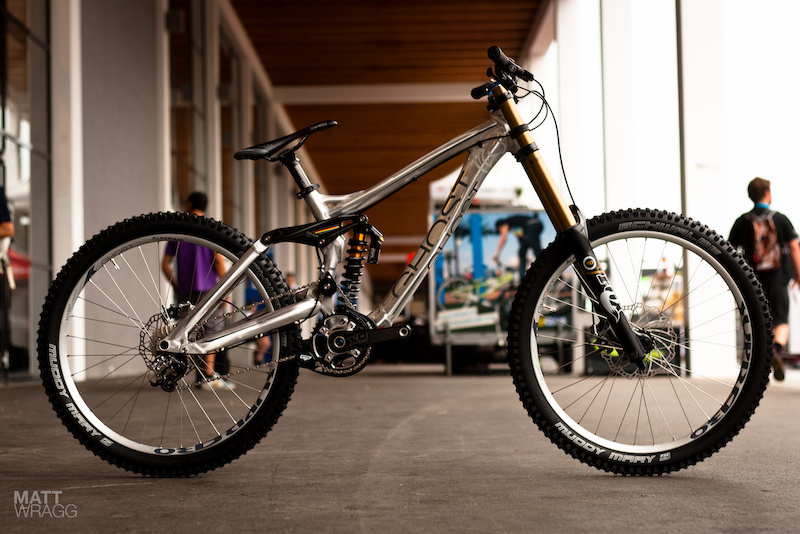 Why go to all that trouble when it would be easier to simply locate the main pivot a few inches lower and inline with the top of the chain ring? It's all about allowing the rear wheel to move out of the way of bumps as easily as possible, a trait that is greatly helped by employing a relatively rearward axle path (through at least part of the travel) that allows the rear wheel to move back and away rather than having to travel in a more upwards fashion. The idler wheel allows Ghost to design a bike that takes this approach to the extreme, but without the negative drivetrain feedback that would otherwise render the bike a dud - removing the idler and would not only result in a hell of a lot of noise (the chain would make contact with the chainstay), but it would also greatly stiffen the suspension under pedalling loads while forcing it jack up through its travel. But with the idler in place the bike likely pedals quite neutrally regardless of the pivot location.

2013 sees Ghost make two notable changes to the Downhill frame, one weight related and one intended to increase the bike' efficiency. They have managed to remove approximately 600 grams, that's 1.3lbs, from the frame, with most of the reduction down to a re-working of the forged, one-piece bottom bracket/ISCG-05/lower shock mount unit. On top of that, they have greatly reduced chain tension as well. The bike's idler wheel layout requires an MRP chain guide with a custom wide-spread boomerang to postion the upper and lower sliders in the correct orientation, with the 2013 version utilizing an even wider slider positioning that brings chain tension figures down to a more normal region. 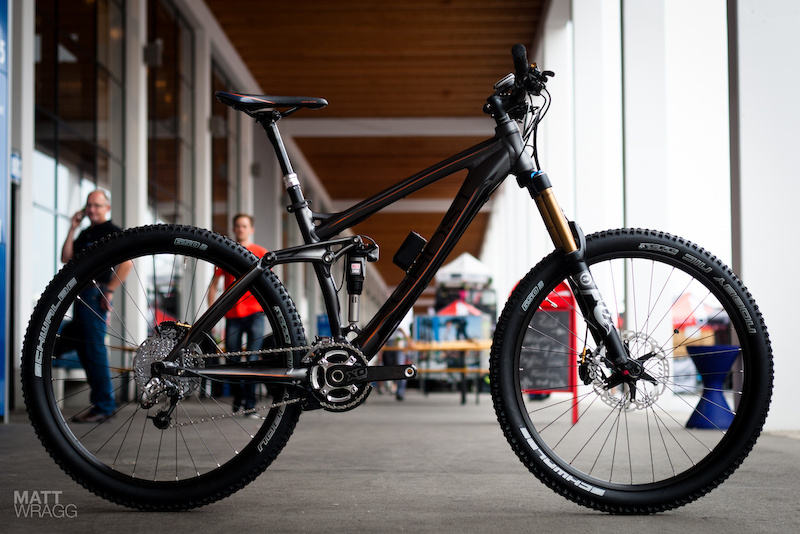 The 'E:i' designation at the end of the Cagua 6591's name refers to the bike's RockShox Monarch E:i rear shock. What exactly is going on, and why is there a battery bolted to the bike's down tube? The E:i system is all about anticipating bump forces at the rear wheel before the impact actually happens. A small capsule attached to the Monarch hides a tiny servo motor that alters the shock's compression damping between locked out and completely open within 0.01 of a second. But the real trickery is actually found elsewhere of the bike, though, with sensors hidden within the bottom bracket shell reading if the bike is being pedalled or if it is coasting. These sensors, teamed up with accelerometers located on the stem cap and the fork lowers, read the severity of impacts at the front wheel and tell the Monarch shock what is about to happen. We've ridden the E:i system, albeit on another brand's bike, and were happily surprised with how well it performed. 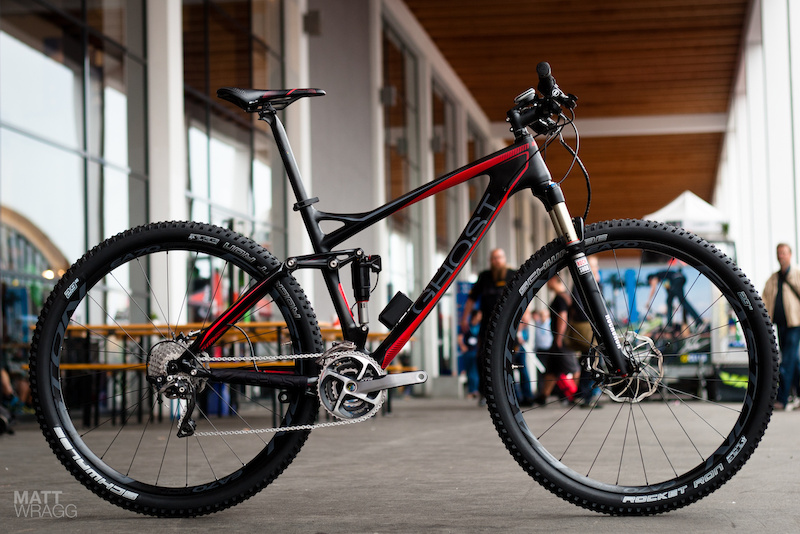 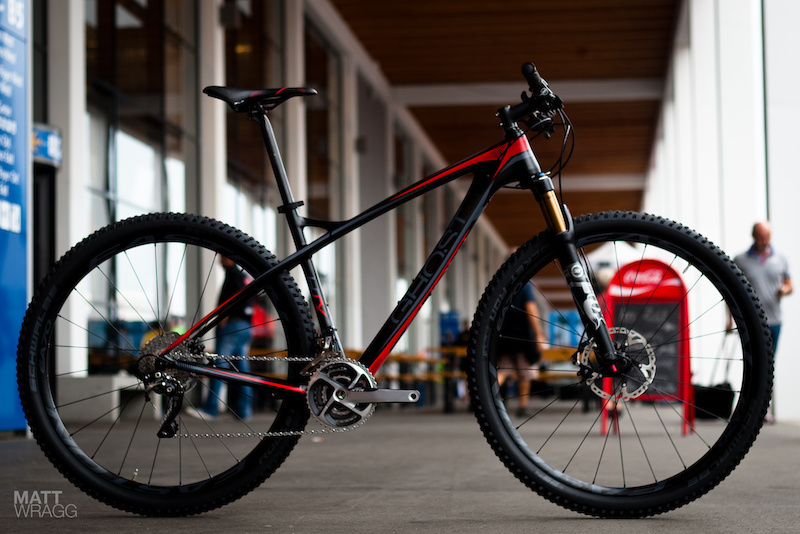 HTX Lector 2990
Looking for big wheels but less travel? Want to do some cross-country racing, or maybe just crush your riding buddies on the climbs? No, it likely won't pull at most riders' heart strings here on Pinkbike as much as the Downhill 9000 or Cagua 6591 E:i, but the sporty looking HTX Lector 2990 certainly has a place. There is quite a bit going on with its carbon fiber frame, including a nifty system that allows for both internal and external cable routing - but without the empty cable bosses when running the lines inside - as well a degree of flex tuned into the bike in a search for rider comfort. Rear suspension it is not, but it might be enough to take the edge off during a long ride or race.

fullyloaded (Aug 31, 2012 at 4:22)
I love the carbon fiber rocker arm and the upper chain guide wich helps while pedaling!

finnrambo (Aug 31, 2012 at 13:01)
I love the look of that bare metal, I think the old cagua has it to looked like a legend until i saw the completely different frame design

NoSkidMarks (Aug 31, 2012 at 4:11)
The 9000 looks brilliant, but so do the others.
Sure looks like a crack running from the rear axle on the 9000 in the close up. Right through the edge of the weld. Probably not, but sure looks like it. I think it's just be a weld on a weld with a shadow.
If I didn't have a Zerode, I'd consider buying a 9000 for sure.
Good on them for doing 650b, I think it will be a good evolution, but we'll see. Hope they're as fun as 26", but just eat stuff up a bit more. Hopefully this will encourage some more rugged tracks, but 29ers certainly didn't help, the tracks just got lame, for the lame bikes they are. 650Bs quicker steering and shorter stays will hopefully encourage more fun tracks that single speed and 29ers have DESTROYED, yes DESTROYED, damn you.

hamncheez (Aug 31, 2012 at 9:00)
I HAVE A QUESTION. So, I've never ridden one of these high pivot bikes, but the theory makes sense. Like having a more raked out fork. But if this is true, then how does Gwin ('Merica!) kill it so badly on a relatively low single pivot bike? The VPPs and DWs do have quite a bit of rearward travel, and they don't need an idler (except Canefield Bros).

Also, when does that Horst link patent finally die?

smike (Aug 31, 2012 at 13:33)
Gwin kills it because he's an amazing rider, no matter what bike he is riding. And that 9.9 he's on is no slouch of a bike either. The bike as a whole is more than the suspension design. And the winning machine named Gwin is more than his bike.

bikeddict (Aug 31, 2012 at 3:54)
i had a northshore 800 for 3 years and hammered it! its still alive and kicking. it was an awesome bike even now the suspension feels parallel to bikes twice as expensive. i couldn't even fathom how good the 9000 feels like.

saso (Sep 1, 2012 at 3:11)
I have the 2011 northshore and its sweet the rear suspension jusr eats anything the faster you go the better it preforms

racerfacer (Aug 31, 2012 at 8:29)
I race cross country and pedal around a 6" bike, but I find myself leaving the shock open all the time. I want the shock to be open on small dips and undulations on climbs and flats, the kinds that buck you on a hardtail or gobble up your wheels. I've never ridden a Specialized Brain, or this electronic system, but it would be interesting to see if they are sensitive enough to pick that stuff up.

muska10 (Sep 3, 2012 at 3:35)
I have a Ghost DH and it´s by far the most impressive Downhill bike I´ve ridden.
It´s a dream bike and few people know it exists.
1 year so far riding this beast with a lot of races and some crashes in he mix, and it looks as good as day one, and it´s one of the strongest and stiffest frames I know...

That DH 9000 looks like a killer bike,man i want to ride one.

How are the bikes keep standing btw... ?

MalcolmXL (Aug 31, 2012 at 4:47)
good idea to take a frame that is contantly making troubles (breaking rear ends) and shave of some more weight of it... no comment on that...

mazze (Aug 31, 2012 at 6:48)
Do you have a picture of a broken rear end of a Ghost DH bike?
Personally I've never seen one and google doesn't seem to find one either... Apart from that, the weight saving was shaved off of the front triangle and carbon rocker arm.. not the rear end.

MalcolmXL (Aug 31, 2012 at 8:48)
I have seen one with my own eyes, know of a racer who had numerous broken rearends in one season, and of a bikeshop with massive amounts of broken costumer frames coming back... so i am pretty sure wwhat i am talking about...

saso (Sep 1, 2012 at 3:18)
I work in a bikeshop with ghost bikes and a club that has ghost bikes and the crosscountry guys are not easy on the bikes nether our dh racers but so far no broken frames... Just a few paint problems on the dh bikes

I was a proto test rider for k9.

My friend owns a ghost.

It is a shockingly bad attempt at rearward travel.
the only real difference is the chainstay pivot by the dropout, instead of a lower link behind the bb.


And of course the k9 has a 15cdv6 front end. And one piece linkages. And seam welded stays. And adjustable head angle. And adjustable pedal feedback. And adjustable wheelbase. And custom tuned shock and fork. And xylon (Teflon) paint.
But the overall design screams rip off.
Without any of the details.

tobiusmaximum (May 2, 2014 at 5:15)
Fair enough. Well of the people I've asked about k9s, most said they're hard to set up and weird to ride. And so far all I've picked up is praise for the ghost 'shocking attempt'. But if you were a test rider you probably have some loyalty to them. With so many designs about today, unless it's a legal issue level copy then it's not a rip off in my book, you've even admitted its pretty different by saying its a shocking attempt. Have you ever thought, maybe they weren't attempting to copy anything?

oldmanDan (May 2, 2014 at 9:18)
The thing is, the guys from ghost apparently spoke to Luis about the rearward travel thing a while before their frame came out and showed interest in the design and how its idler negates chain growth. All they could do to replicate the design without copying it was to move the cs pivot to the rear end. This hinders the rearward travel slightly meaning it rides more like other bikes. The k9 however uses slightly boutique materials and production methods instead of an alu front end. As for setup, if you bought it from k9 it will have been tuned and valved for your weight and riding style, with a comprehensive guide to adjustments for differing conditions. This was standard! The only weird thing about a k9 is there is so much rearward travel, they are hard to wheelie when you first get on one, but give it a day and you won't notice. What you will notice though is the sheer speed it carries through really rough sections, and with the neutral chain growth throughout the travel you can pedal through rough bits without any pedal kickbacks. They never caught on though due to recession and the huge costs of running a team! Imho I do have some loyalty as Luis is a good friend, but having ridden carbon demos, Turner Dhr, intense, nukeproof, and loads of other more recent high spec frames, my k9 still feels the most stable at high speed

tobiusmaximum (May 2, 2014 at 9:46)
Another fair comment. Do you think I'd regret getting the ghost then? In fairness, my main reason for getting it is the large, at 1230mm is longer than most but not as long as the large 1240mm summum. (I'm siz foot four but still a it concerned about getting a freight train length bike like the summum. It's only really for southern England and Wales.) but I just heard its a good bike too.

oldmanDan (May 2, 2014 at 10:43)
The ghost IS a good bike! My friend wanted a large, got sent a medium, but kept it as it is longer than most med frames. If you are tall, the size should be fine, and the ride won't be too odd feeling when you get on it. You will notice the rearward travel, and how it keeps speed though. get one, they look cool and like my k9 you won't see many about like the demo, session, glory etc..