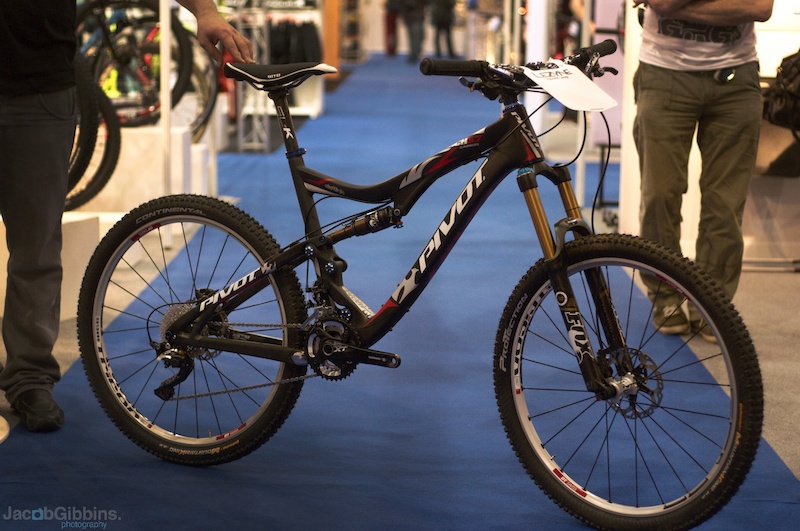 Pivot's new 5.7 Carbon has the same 145mm (5.7'') of travel as their aluminum version, but shaves roughly 200 grams thanks to the switch in frame material. Total frame weight sits at a claimed 5.2lbs. Tech notes include the bike's tapered headtube and 12x142mm thru-axle rear, as well as some very nice frame protection in the form of molded rubber sections on the downtube and chainstay. 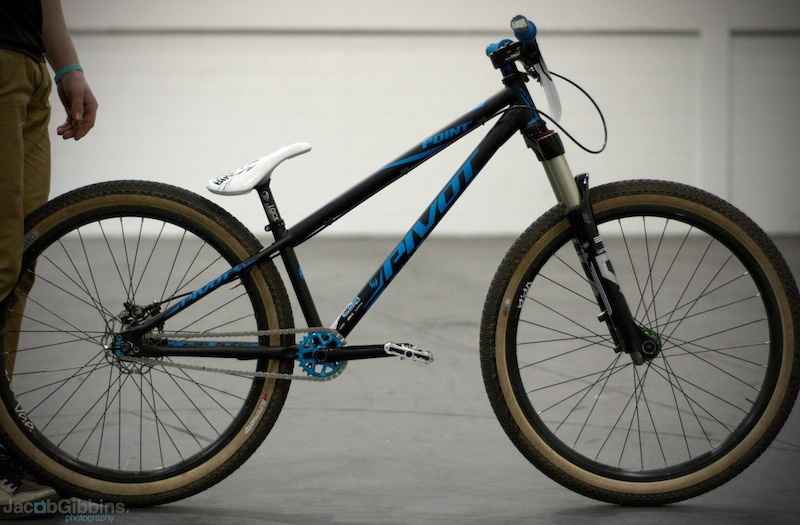 Pivot was also showing off their Point chromoly steel hardtail, a super clean looking bike that features a tapered headtube and interchangeable dropouts that allow you to fit a number of different axle options. It's shown with a single speed setup. 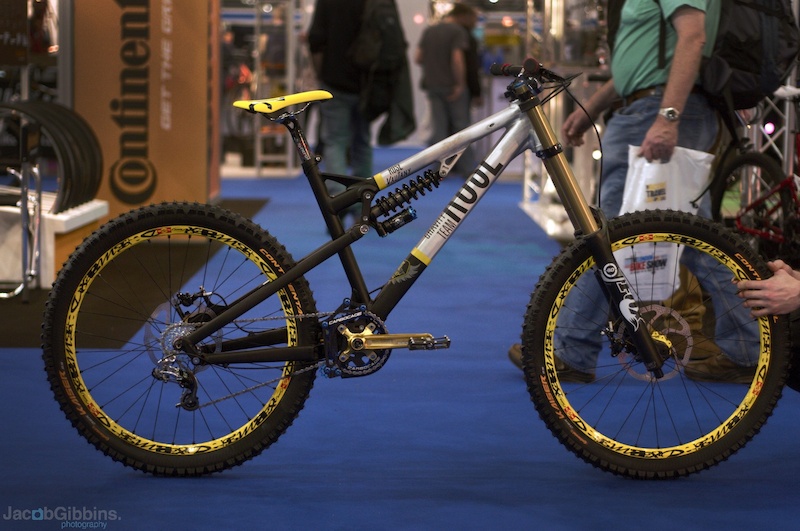 The Rose Beefcake is sporting updated geo, including a 64 degree head angle that should make it much more DH friendly. The bike shown above uses the race team's spec, including the mega exotic Carbocage chain guide. 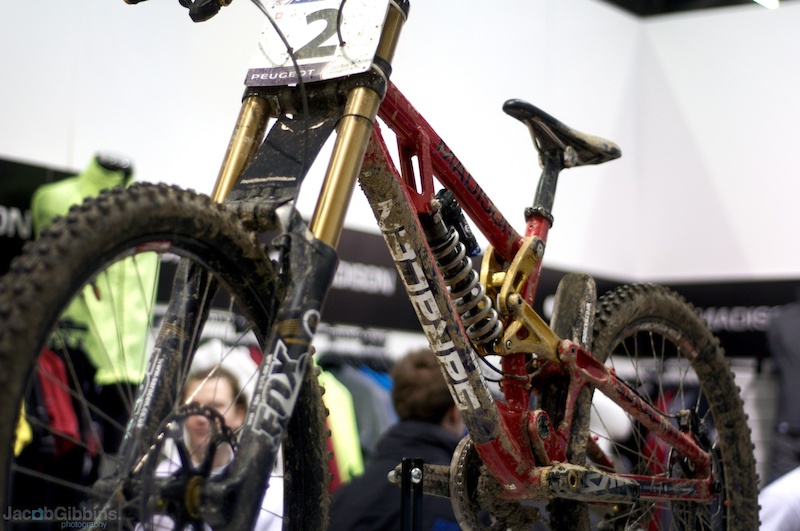 Saracen had Manon Carpenter's Myst on display, the very bike that she rode to her 2011 Junior Downhill World Champs win. 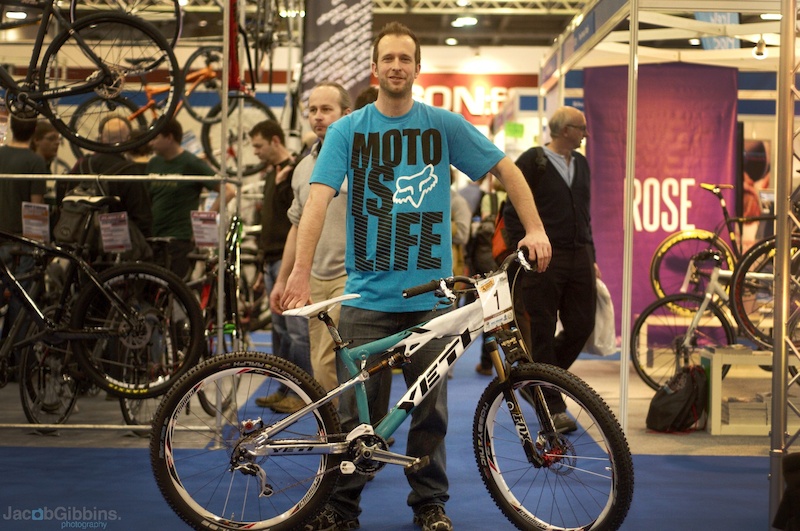 Scott Beaumont is now going to be going to 4X and dual battles for Yeti. 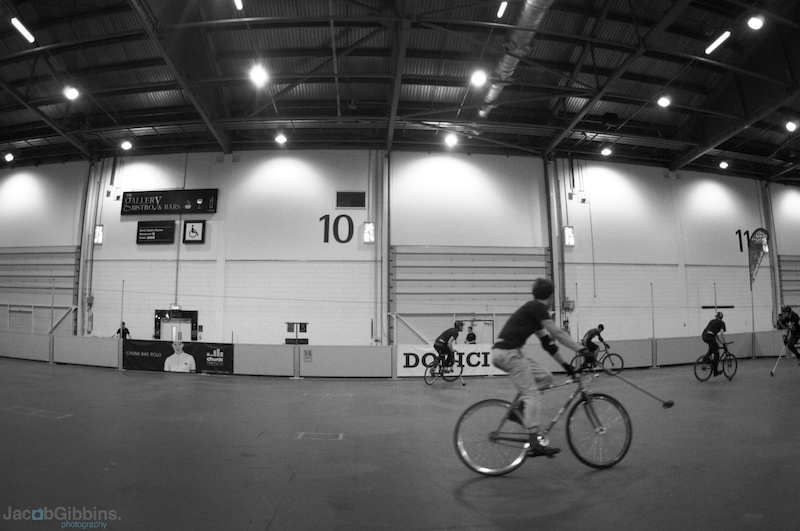 Bike polo game in session at the London Bike Show. 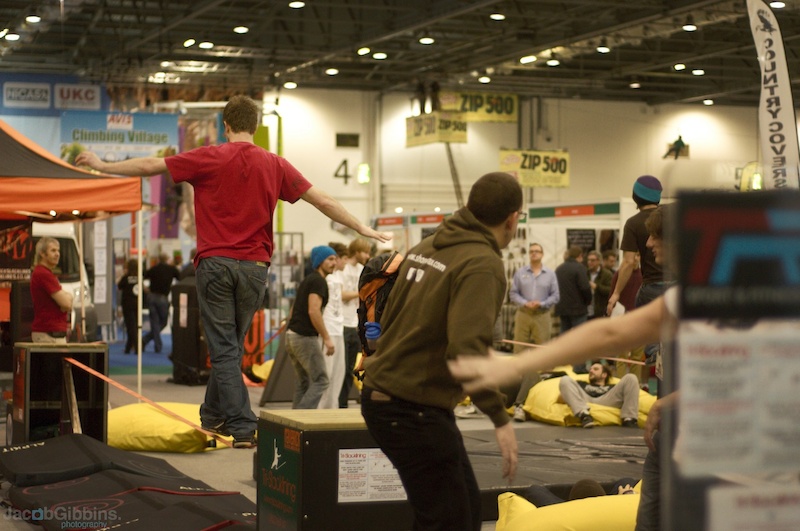 There was also a slackline setup for people to test themselves on. There was plenty of carnage to be seen, as you can imagine. 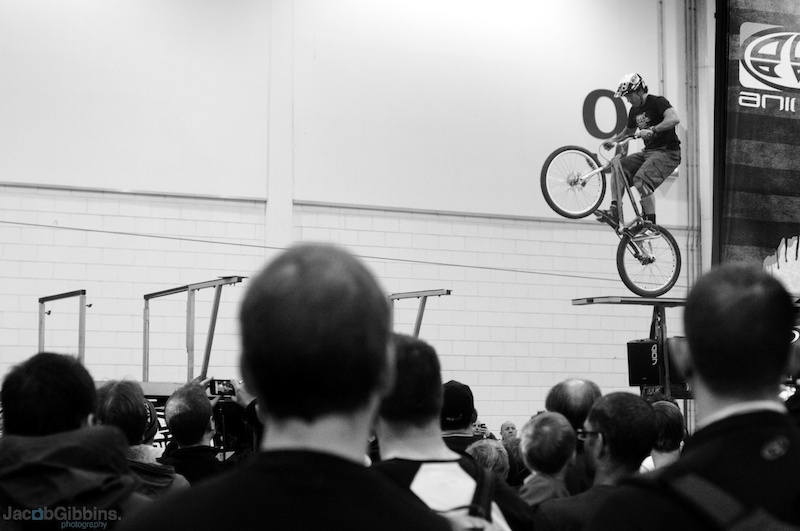 This trials demo had many onlookers' eyes glued to what was happening. 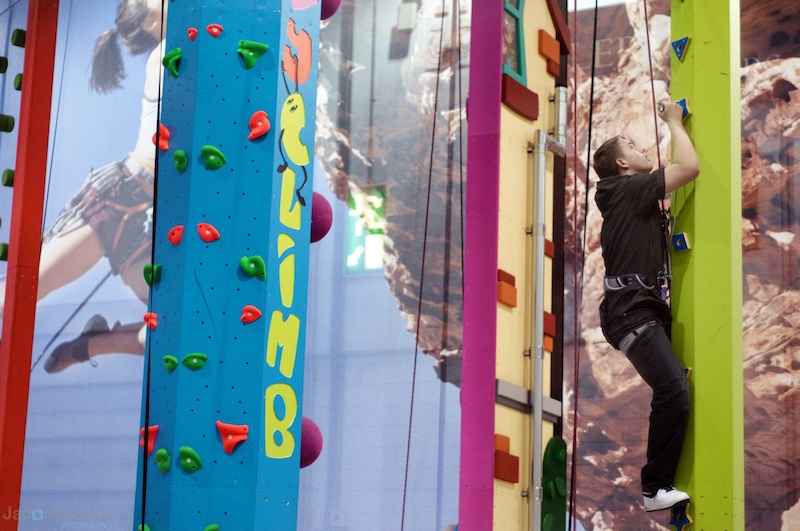 The fine folks at Interbike need one of these for next year's show, although that might seriously effect the amount of coverage that you all get to see. 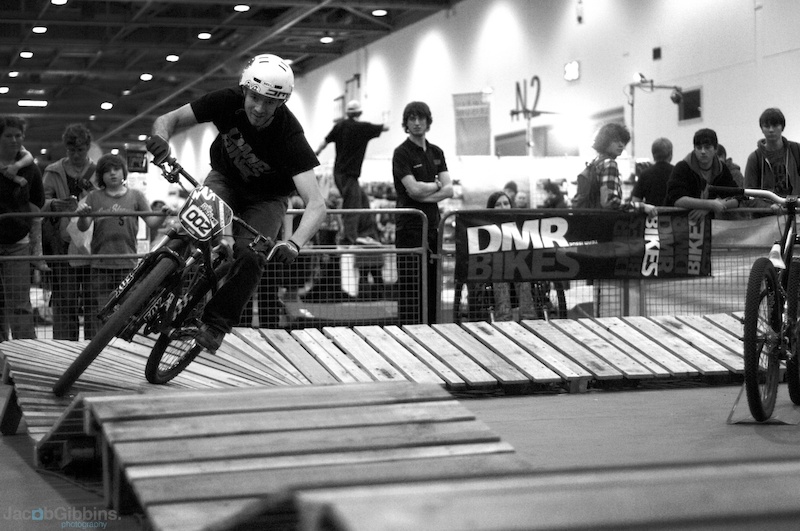 Riders were absolutely pinning it on the wooden pump track, splinters be dammed. 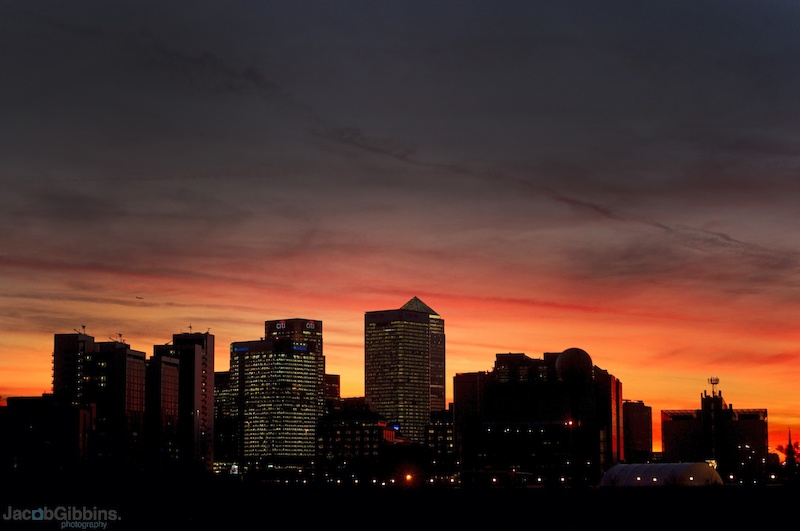 Stay tuned for more from the London Bike Show!

Downhill340 (Jan 13, 2012 at 14:34)
I dont know how Id ever go to one of these shows. Id never leave , I would want Everything. But great job on people setting up these to get their bikes and also the sport out there.

WonderAnt10 (Jan 15, 2012 at 7:27)
Same here! I went to look for new products for my shop I work at and my boss had nearly pull me out. I was completely overwhelmed with the amount of products that were there and just wanted to ride everything. I was there from the minute it opened, and only left and hour or so after it was suppose to be finished. I just hung out with the guys at the Giant booth to talk a bit more about there bikes and thing this have coming in for 2012.

domino0 (Jan 13, 2012 at 14:48)
Remember that Pivot are a leading, high valued, prestigious brand like Yeti, consider that cheap considering the ALLOY Yeti SB66 costs £1999 - hate to imagine the price of the carbon one...

deeeight Plus (Jan 13, 2012 at 15:27)
Well then you need to clean out your ears because they really are in the same category, if not better. Also comparing a direct to consumer brand (like YT or Airborne) without any LBS support to a brand that only sells thru an LBS (like pivot and yeti) is pointless. They're not even in the same category.

deeeight Plus (Jan 14, 2012 at 6:44)
Also these are high end american brands you're talking about... the prices at the london bike show include the import charges to get them to jolly ol' england. A Niner Air9 HARDTAIL carbon frame is £1699, so yes I would see a full suspension carbon frame
for only £400 more as a very competitive price.

wilsonm73 (Jan 14, 2012 at 9:36)
You're right they are expensive but there are some good cheaper alternatives if this doesn't fit your budget: Specialized, Commencal, Trek, Giant, and many other EU brands have good bikes in carbon as well for less. SC, Intense, Yeti, Pivot as high end boutique makers have a niche market and struggle to make it affordable with import taxes/duties and EU sales taxes. I lived in Germany and sales tax is a whopping 19% there. So a $2600 Nomad C just became around $3220 with the sales tax of 19%. They are expensive here in the US too. $2600 plus tax for a carbon Nomad is a lot of money no matter how you slice it. I have decided to wait till carbon becomes the new aluminum to buy when the prices come down.

phdotd (Jan 15, 2012 at 12:46)
i think pivots are great, i will always be a dual link suspension fan and will always ride only VPP or DW links, I ride an intense an older 6.6 and test rode the aluminium Pivot Mach 5.7 and thought it was fantastic, i'ld buy one, if i had the money which i don't so i won't, but the Intense carbine is in the same bracket, it seems that if you want a carbon all mountain ride you're going to pay, the bike industry controlling it again.

deeeight Plus (Jan 15, 2012 at 14:09)
Technically all horst-link 4-bars are also virtual pivot points... as are ellsworth ICTs, Rocky Mountain's Smoothlink & ETS link, the virtue link from Felt, and the Whyte Quad-Link that Marin also licenses among many others. They all call them something different, usually something trademarked, but essentially they all do the same thing. Having a long linkage like a Horst/FSR/ICT 4-bar or a short one like DW or SC/Intense VPP doesn't change the principal at work.

wilsonm73 (Jan 15, 2012 at 16:33)
Your right at one level. The biggest difference between the VPP and the others is the counter rotating links. It's why the SB 66 is close to violating SC's patents. Most of the other bikes you mention have parallel links. But the idea is similar in that the pivot point is adjusted by the linkage for a optimum performance.

deeeight Plus (Jan 15, 2012 at 19:39)
Yes but its also the axle path, the actual Outland VPP patent which SC bought had a very specfic axle path to chain torque relationship explained in the patent description. As long as the SB66 doesn't follow the same axle path relationship, its not violating the VPP patent.

wilsonm73 (Jan 16, 2012 at 10:45)
I think its more complex than that. The axle path is not the only thing SC bought the patent for. I think there are probably other parts of the design the patented as well. I don't think they'd be putting up a lawsuit if they didn't believe there was some sort of infringement. That's not the kind of company SC is. They're not like Specialized just out to put everyone under their thumb. I think we'll see what the California court has to say before jumping to any conclusions. Its too bad I like SC and Yeti.

rustybones (Jan 14, 2012 at 11:49)
Jesus. That bloke on the video said "errm" so many times it made my ass pinch up. Was like listening to John Major... selling something he knew fick all about!!

Eyon (Jan 13, 2012 at 16:36)
I gotta disagree Plonka, London is one of my favourite cities in the world, and certainly one of the most beautiful! Scotland does beat it though, so long as we're talking the cairngorms rather than my home town of paisley!

EuanBisset145 (Jan 14, 2012 at 2:36)
haha 'gloomy rainy weather' I don't get this stereo type of the weather in britain being so bad, yes we get a good share of rain but we also get a lot of really good weather too. In november there was dust flying at some of my local trails.

rorywood (Jan 14, 2012 at 11:18)
woops misunderstanding....i meant it as in scotland is like that quite often....although lately its been horrible i agree

hampsteadbandit (Jan 14, 2012 at 11:58)
my buddy went and said the show was crap - really tiny compared to the "proper" bike show in the UK - it was a sideshow to the "Boat Show" taking place next to it, which was massive in comparison

the UK's biggest 2 brands Specialized and Trek were not there - he called Specialized to ask why and they said "its a waste of time for us, its not a proper bike show!"


the pump track "challenge" was hilarious - but like previous DMR Pump Track Challenge rounds, BMX riders were banned, as they would have handed the MTB riders asses to them on a plate

charleyboy14 (Jan 14, 2012 at 15:31)
From a person who was there the show was poor, but the pumptrack challenge was the tits, and bmxers wern't banned 20inch wheels where so if they where so good why didnt they rock some big wheels and prove it

I've been riding BMX and MTBs for 20+ years plus, and have ridden both wheel sizes extensively on pump tracks

you cannot hope to keep up with 20" wheels on a pump track if you are riding 24" or 26" wheels (ever watched the insane speed of BMX racing?) which is why they were banned from the DMR pumptrack series

Liggster (Jan 15, 2012 at 16:10)
That guy sounded clueless with his knowledge about the Pivot frame... Perhaps he was a random by-stander roped in to say something :-)

MarcHenry (Jan 15, 2012 at 8:59)
Why are Rose using an "exotic" Carbocage. Have they not heard of Csixx? Best chain guide you can get. Lighter, stronger, quieter and smoother than anything else out there

louie15 (Jan 18, 2012 at 3:19)
Well very much enjoyed racing on the pumptrack with the pros, it was much more fun than the cycle show and way less road shit.

deeeight Plus (Jan 14, 2012 at 6:47)
Different countries have different import duties, taxes, etc. You cannot compare prices simply by exchange rate values. Hope hubs and brakes are made in the UK and are ridiculously cheap there but in canada the stuff is way more expensive. If you look at Hope products in the USA, they cost more than chris king. But in the UK, its the other way around. In canada, CK components at wholesale are higher than the retail prices for the stuff in the USA (if you simply compare exchange rates of currencies).