Florian Vogel will be racing on Focus' brand new, 100mm-travel O1E cross-country weapon during this weekend's World Championship event in Nove Mesto, Czech Republic. The last time racers were here was the opening stop of the 2015 calendar, and it was an all-out battle for the win between Kulhavy and Schurter that saw Florian finish in fourth behind Julien Absalon. Flo was riding a then-prototype Focus hardtail, but it looks like the Swiss racer has decided to take a different approach in 2016. 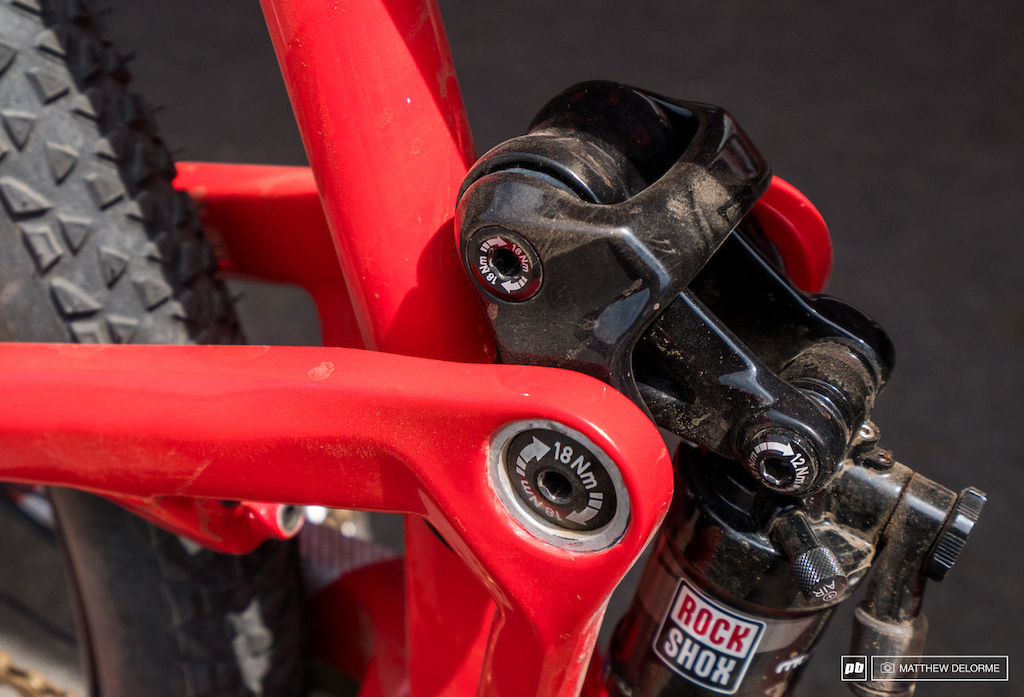 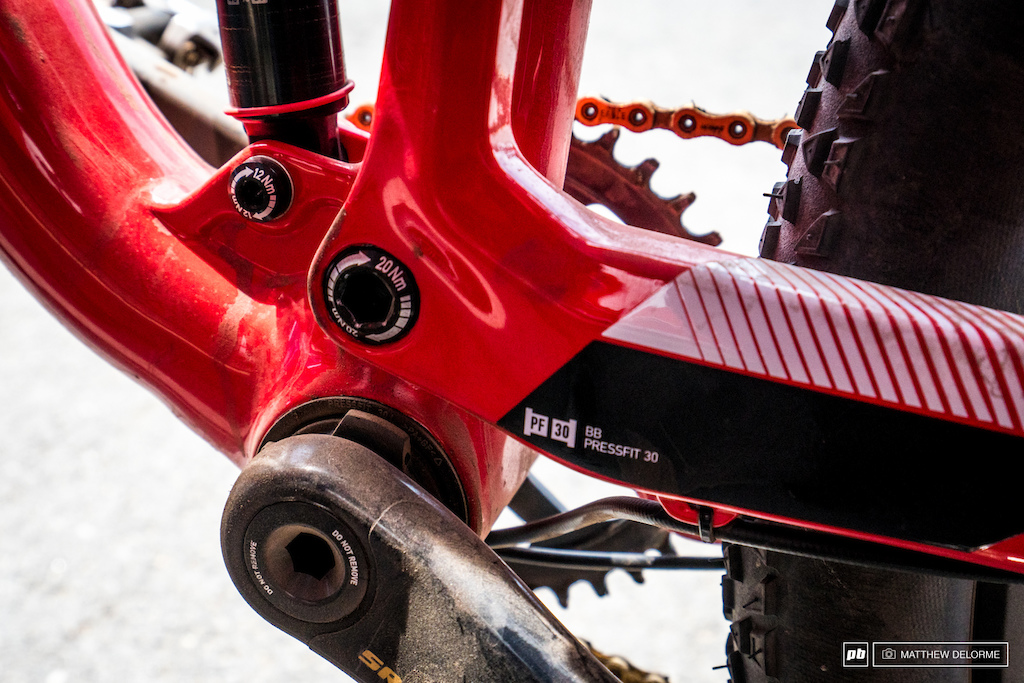 
The 29'' wheeled O1E employs Focus' new F.O.L.D rear suspension design that, while odd sounding, stands for 'Focus Optimized Linkage Design.' Yes, the nomenclature does refer to the action of the bike's two short links that activate the shock, but talking about folding and lightweight racing bicycles in the same sentence does seem like an odd marketing strategy, doesn't it?. Anyways, Focus claims that the bike's travel can be viewed as two phases: along the first phase of travel, the system is said to be regressive to create a sensitive beginning stroke that can absorb small bumps while increasing traction. Then, once the bike enters the second, deeper phase of its travel, it ramps up to keep you from clanging off the bottom of the shock's stroke. The shock also receives a custom tune to help all of this.

The Focus team is a SRAM-sponsored outfit, so Flo's bike is sporting a Monarch XX shock to control the 100mm of travel, and the new SID is up front. Both can be locked out by pushing the single XLoc Sprint button on the handlebar, something Vogel will no doubt be doing for the race's start and any time he'll be hammering out of the saddle.

And like all top cross-country racers, his handlebar height is lower than most riders would ever feel comfortable using, and is compensating for the 29" wheels - it's all about keeping the front-end down while hammering, quick handling, and the most powerful position for an hour and a half of all out effort. 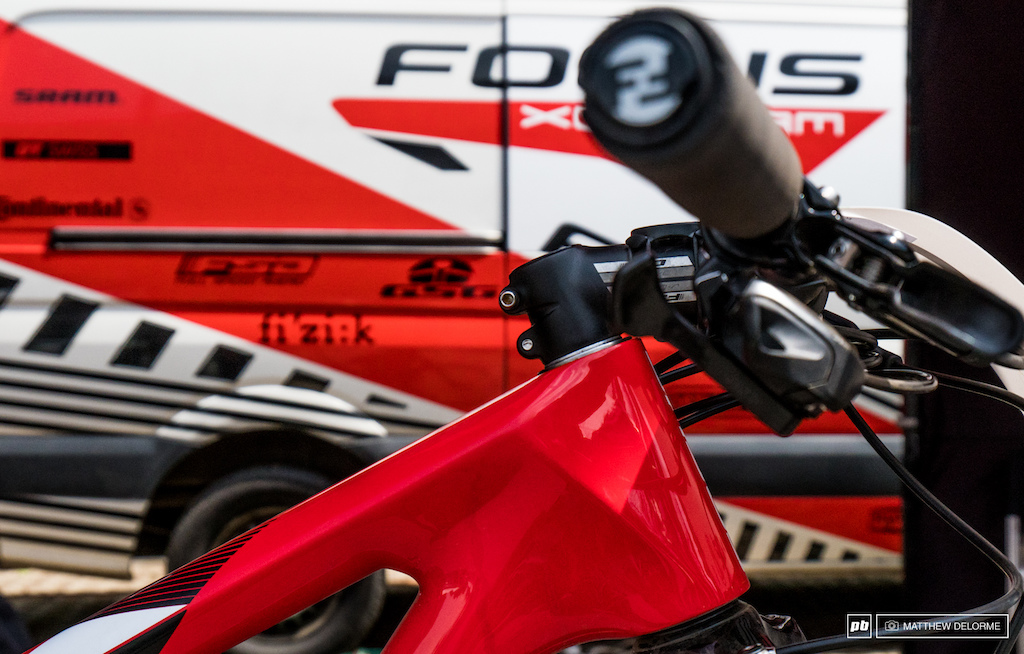 Headset top caps are for slow people who don't have personal mechanics, right?

Flo is also another top cross-country racer who's begun to use a dropper seatpost when he believes that it's worthwhile, and that's apparently the case on the Nove Mesto course. These guys don't need the saddle drop that most of us prefer, however, so he's using KS' LEV Carbon (carbon outer tube, carbon head, carbon remote) that would usually offer 65mm of travel. However, Vogel has had the upper part of the post's stanchion wrapped with tape to keep it from ever using full travel, an arguably ghetto but effective solution that appears to limit the LEV Carbon to roughly 30mm of stroke.

Why would he do this? Vogel says that with this setup he can still pedal efficiently when the seat is lowered and he's sitting, meaning that he might not have to raise or lower it as much as he would if it offered full travel. One less thing to think about when he's pinned, I'd imagine.

gabbatron (Jun 30, 2016 at 20:01)
@richierocket: I enjoyed without weights. Not everything is about weight as you can clearly see he has gone for the heavier 12 speed eagle and dropper post.

grgsmith (Jul 2, 2016 at 8:23)
I assume they are contractually obligated to use Eagle (which I'm sure is awesome but depending on how flat a course is might be heavier with no advantage)

xcracinguy (Aug 3, 2016 at 20:08)
@grgsmith: Its an advantage for Florian . With a wider range cassette, he is able to run a larger chainring up front which gives him greater top end speed. He may prefer to turn a larger chainring when its faster terrain. Schurter is doing that same thing. Schurter's mechanic even said he may run a 40T up front for some races.The larger size cassette makes up a bit for the added size of the chainring.

Every time "pinned" is used or a bike is called a "weapon" i take a shot. It's going tl be a rough summer with the Olympics

slimboyjim (Jul 1, 2016 at 0:34)
Does that include the comments sections, because that bike looks pinned, pinned, pinned, and definately a weapon, if you can describe a pinned bike as a weapon... Hopefully you read REAL slow...

WAKIdesigns (Jul 1, 2016 at 2:54)
I will be doing that with Downhill practice reports and captions including "pinned all day" and "come the race day"

kev1n (Jun 30, 2016 at 14:11)
wonder if you can apply this suspension to longer travel models with more progression built in, I like the idea of it. Pretty much a short linkage gambler so to speak, all they have to do is raise that main pivot!

neologisticzand (Jul 1, 2016 at 10:02)
@AGR97: "Vogel says that with this setup he can still pedal efficiently when the seat is lowered and he's sitting, meaning that he might not have to raise or lower it as much as he would if it offered full travel."

Sshredder (Jul 1, 2016 at 9:09)
Nice looking bike. Like a fast Ferrari. The huge Frisbee hanging out back looks out of place.

jkreger (Jun 30, 2016 at 21:01)
What am I missing here? Why are these xc racers who are using dropper posts modifying them to have less travel? I would thing that if the travel is there, use it.

cunning-linguist (Jun 30, 2016 at 13:52)
@wingguy: because the top cap seals in aliens that can attack you when riding. Don't want your throat slit by aliens do you!

LeDuke (Jun 30, 2016 at 15:24)
@groghunter: I'm guessing it's about getting himself into the optimal position, rather than weight.