Sep 30, 2008 at 23:19
by Mike Levy
Tweet
The Quake 7.9 is Marin's big travel freeride bike that is versatile enough to pedal to the goods if you need to. With it's unique Quad Link 2.0 suspension and a full Saint parts kit the 7.9 deserves a closer look!

Watch the HD Video inside and get to know the Quake 7.9!Marin Quake 7.9

Marin's long travel machine strikes an imposing stance when you first lay eyes on it. With a super solid and burly looking swingarm, a 1.5" headtube, and finished in dark gray anodizing, the 7.9 looks like it's traveled back from the future to kick some ass and take some names. Earlier we looked at Marin's Wolf Trail 6.8, now it's time took have a gander at it's long travel brother. 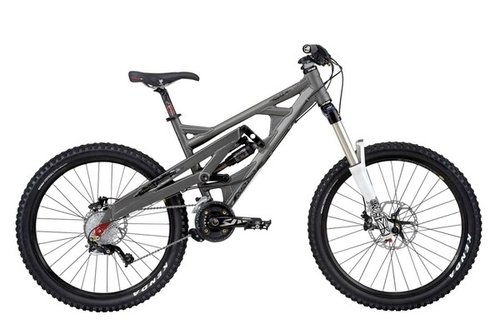 The Quake 7.9 is a deep bike, get to know it better by watching the video!
At the heart of the Quake is its Quad Link 2.0 suspension. A 4-bar linkage system originally designed by a former F1 genius, Quad Link is used throughout Marin's full suspension line-up and can be manipulated to work with shorter travel rigs like the 4" Alchemist, up to the 6.7" Quake that we're checking out here. Using two short links lets Marin keep the rear end stiff while enabling them to tune both the shock rate and wheel path. 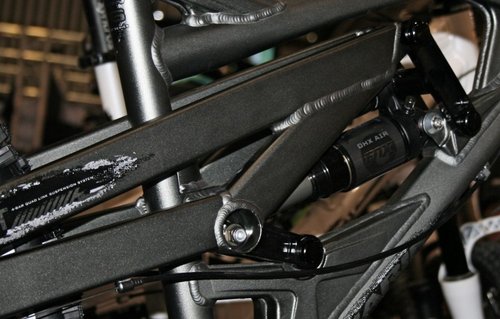 Just how competent is the Quad Link design? Shaums March took his first World Master's Championship win aboard the 6.7" Quake, and repeated the win in '07 aboard a prototype DH sled that also used the Quad Link system. He recently returned home from the '08 edition with a silver medal, good work Shaums!


At the opposite end of the swingarm sits Marin's Modular Rear Dropout System. 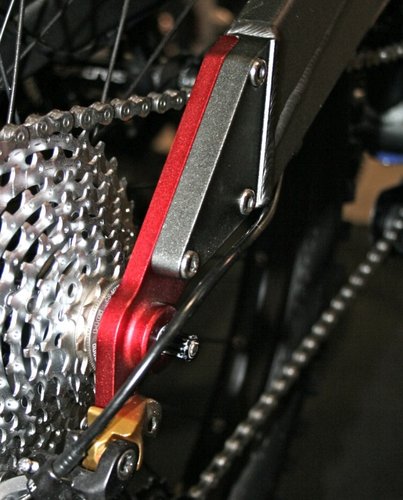 This just makes too much sense. Replaceable dropout's on both sides of the swingarm let you choose between a 12/150 mm rear MAXLE if you are want the best in strength, or the 135 mm QR version let's you run a lighter and faster wheelset. 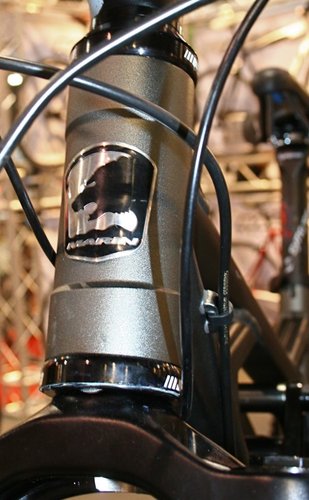 
With the Quake's capable suspension and robust frame Marin chose wisely and spec'd the 7.9 to the tit's with a full Saint groupo. The new Saint Shadow derailleur is a sight to behold and looks like it would survive a nuclear attack. Complete with CenterLock rotor's and Saint Servo Wave brakes the build kit really tells you what the bike is meant for. 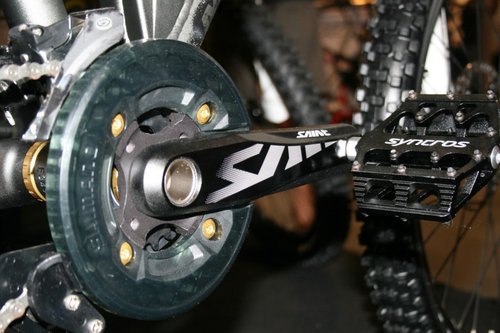 Matching graphics on the Syncros bar, stem, and post work great with the Quake's anodized silver finish. It's all in the details...

Check out the Quake 7.9, it's little bro the 7.8, and the rest of the Marin lineup at Marinbikes.com

commandojohn (Oct 4, 2008 at 12:15)
i never liked marins set up but the parts like the saint cranks and rockshock forks n synchros bar are lush

ceff (Oct 4, 2008 at 13:30)
Very true. The only thing I dont agree on would be that they put a fox dhx air in back so why not put a totem solo air in front? It would definitly complete the bike.

scrider (Oct 4, 2008 at 16:54)
I have been riding the quake series for the pat 4 years built up as a racing bike and I can asure you that this bike is as capable to handle and tackle any dh race tracks. Keep in mind that it's primary purpose is a^Playbike that is capable of riding up the hill to tackle your favourite dh trail or bike park. The bike g's out super nicely, travels flawlessly through it's travel, its super stable at high speed and nimble in the air so you can throw it around anyway you like. Try it before judging it. It totally outperforms a vast majority of similar purpose bikes. Loo for the DH SLED that will come out soon. IT'S GOING TO BE INSANE !!!

nightmareterror (Oct 4, 2008 at 14:42)
I'm sure they wouldn't market a bike that was very poor in construction, it looks like it can take some heavy abuse. I'd ride that. I'd ride the hell out of it.

stills68 (Oct 4, 2008 at 17:49)
all you that judge this bike on looks.... grow up. i ride a quake and it climbs anything and will take any dh you throw at it. the only downfall is that it is a little heavy but with the right part choice they can be alot lighter. so like scrider said, try it be judging it.

johnb1988 (Oct 4, 2008 at 19:36)
I also have been riding the Quake for the past race season, I have had no problems what so ever with this bike. So don't judge it on looks before you ride it, it has the most sensitive rear end out of any downhill rig I have felt.

Luseboy (Oct 5, 2008 at 13:51)
I acctually demoed a 2008 model. I rode it, hoping I would like it, since I live in marin, but it just didn't have anything goin for it, except the parts. honestly, my 5.5" trail bike is more fun, and feels more like a FR bike too. I do think that a little geometery change would really make that bike shine, but for now, it's just another bike.

*Luseboy* this bike is very hit or miss. When trying to set mine up I was not sure I would like it at all. The air shock was very difficult to find the sweet spot on, and always seemed to be too soft or too firm,
BUT once you get it dialed in the bike is awesome. I absolutely love mine, the only problem I have had is again the paint, and the Totem Solo air (which I still love).

viatch (Oct 4, 2008 at 12:36)
wow that dude has to be the most truthfull no BS PM there is in the bike industry. i like his honesty and strightforward talk unlike most other bike companies all they worry about is trying to sell bikes(specialized)

stubb (Mar 7, 2009 at 13:40)
well got to say i like mine and its cool watchin a vid about it with a coffee with mine sat right next to me , black one as well though the white was my first choice, it is a little lardy but ill swap some bits thru the year , still pedals really well though , good bike

teamrocket (Oct 4, 2008 at 12:15)
marin needs to put some money into aesthetic r&d, their bikes look bulky... heavy and ugly is a bad combination

) and it feels soooo nice.

teamrocket (Oct 4, 2008 at 15:59)
why not flare the top of the down tube instead of all those silly weld patterns webbing the top tube to the down? it seems a bit asinine

halfdermath (Oct 4, 2008 at 12:37)
nothing but talking about how important a light bike is and he never gives a weight..

sethius (Oct 4, 2008 at 19:22)
luke ya sound like the kinda guy who buys all the latest fluro hype colours but doesnt give a shit about anything else. i think thats called a Posers world. IM glad marin have kept it low key not stupid over the top graphics. Appeals to more mature riders probably who have been the down the weight/all looks lane...

will be chasing one of these myself since the US dollar has dropped for us aussies.

luke-miller (Oct 8, 2008 at 12:04)
i dont ride flouro bikes. i ride a simple matte red hardtail, and i think marin needs to do some work on the look of their full suspensions.

jazzboy (Oct 4, 2008 at 16:09)
I think only Haro has worse graphics. Unfortunate because both seem to be quality product.

herbst (Feb 17, 2009 at 8:04)
looks like someone made a frame and decided to throw a bunch of metal onto it, little to bulky and heavy looking