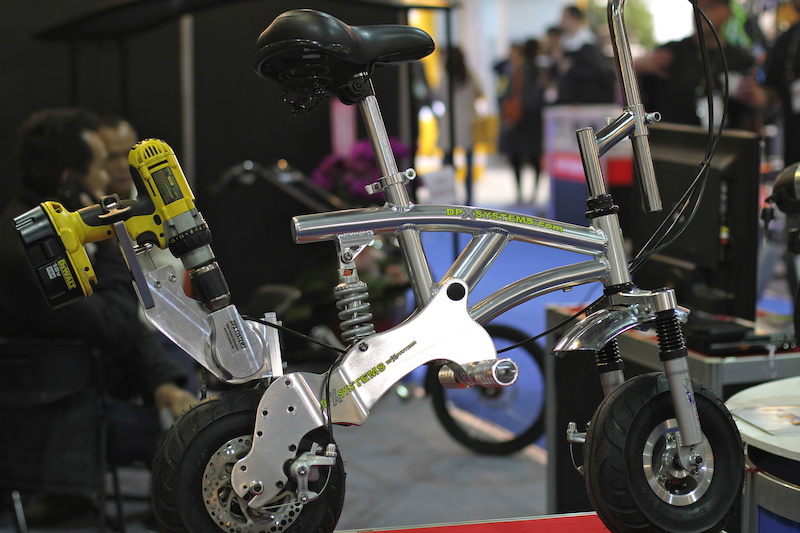 Are you looking to combine your electric drill and pit bike fetish into one questionable activity? If that sounds good to you, DPX Systems might have exactly what you're looking for... if you're looking for an electric drill powered pit bike, that is. The pint sized "bike" doesn't depend on pedal power - there is actually nothing in the way cranks or pedals - but rather a cordless drill that is mounted over the back with a clever adjustable setup that can accommodate a number of different models. DPX System came up with a nifty cable operated trigger that controls the drill's speed, letting you choose to either screw slowly or screw fast, and the tiny bike is hopefully brought to a stop by the world's tiniest disc brakes. What else is there to say but to drill home the fact that this machine has bored a hole in current cycling technology. 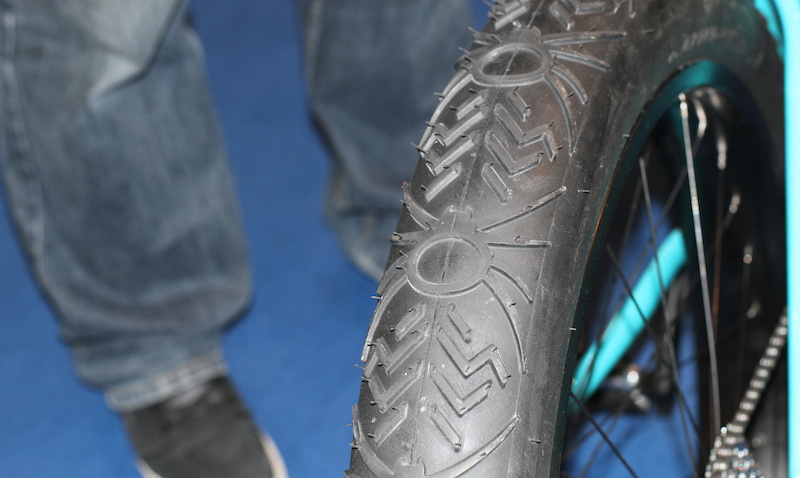 Spiderman can climb up the side of a building with ease, so any arguments about the concept of having a giant spider-shaped lug across the top of a tire not making sense are completely invalid.

We asked the nice people at Joe's No-Flats if they knew or ever heard of Stan, but they said that name didn't ring a bell with them. Their No-Flat system was demonstrated by turning what looked to be roughly fifty screws (maybe that used the DeWalt off of the Drill Bike?) into a tire that, when looked at a little closer, turned out to be solid rather then setup with any of Joe's sealant.

Have you ever wanted to learn how to ride a unicycle but don't have the time to commit to such a serious endeavour? No, we haven't either, but one smart company was showing off a contraption that acted as a set of training wheels by allowing you to have to depend on balance up until a point when the wheeled base keeps the unicycle from shooting out from underneath you and taking out innocent bystanders while you fall directly onto your face. In case you thought that said company was looking out for your safety, they also had a strange little three wheeled machine that you can "pedal" around thanks to the wheels being attached by tiny offset cranks. In fact, the cranks are to about the same scale as the disc brake setup on the Drill Bike. 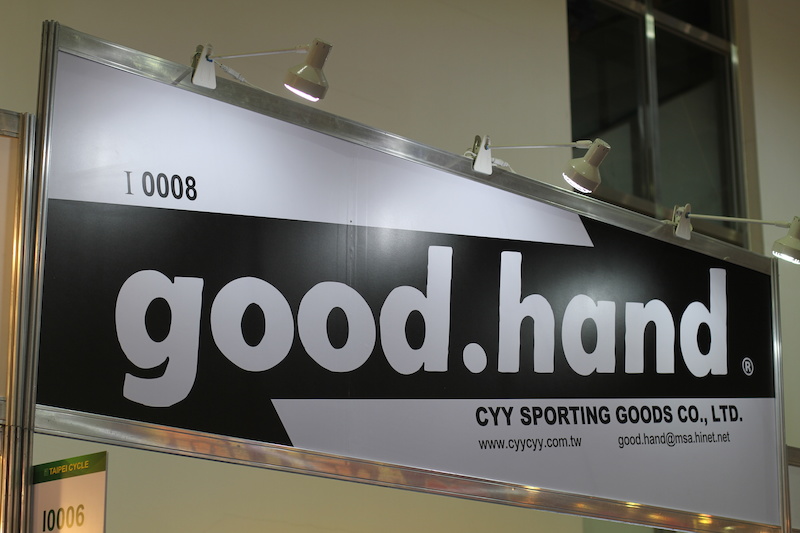 We have been trying to find a good hand in Taipei for quite awhile but have only experienced bad hands this week. That changed when we found Good.Hand.

What does a giant cardboard cutout of an anteater and a fake ant colony that could easily be mistaken for something else have to do with bikes? We're not sure, but apparently the ants that live in the colony like stems because there seems to be one nearly hidden about two thirds of the way up from the bottom. Maybe the worker ants brought the stem back home to appease the queen ant's wishes?

Can you put a name to any of the partly finished items pictured above? 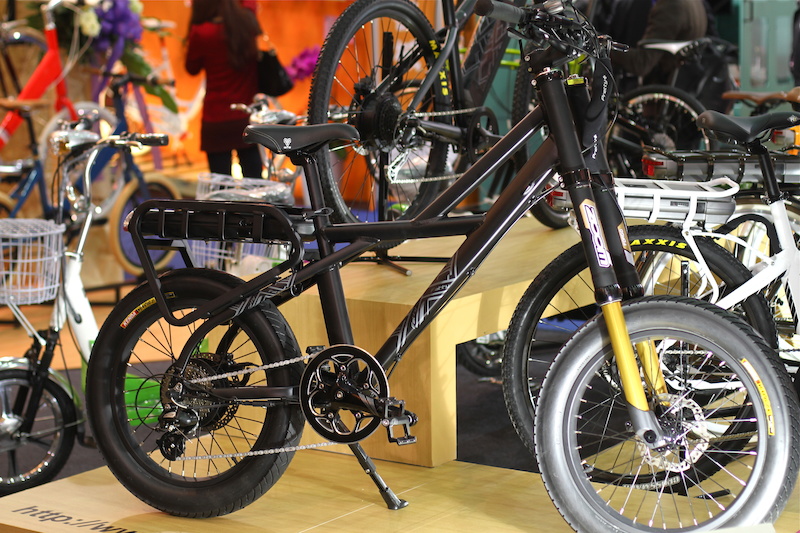 This twenty inch wheeled, electric urban downhill bike is likely a look into the future of what we'll be seeing at the Red Bull Valparaiso Cerro Abajo event over the next few years. It's called evolution, and you can't stop it. 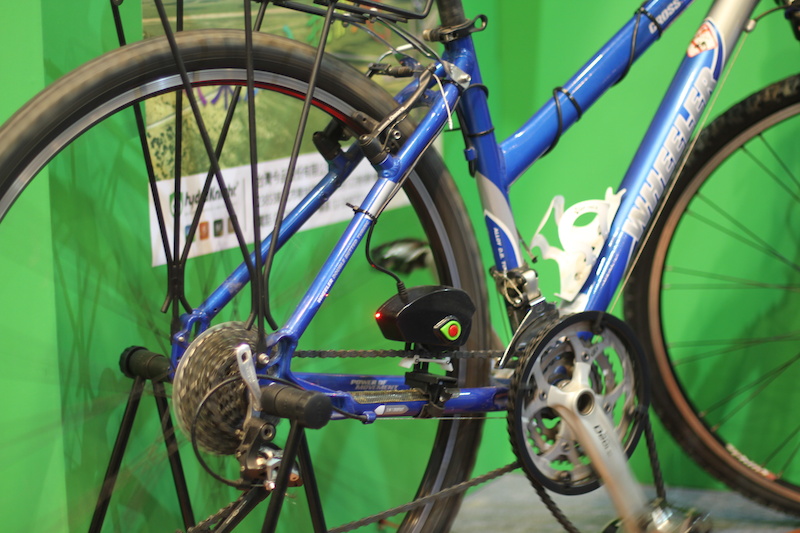 Electric bikes are everywhere at the show, with downhill bikes, freeride bikes, cross-country bikes, and even fat bikes getting the battery treatment. Most of these use a large battery and obvious motor setup that has them looking more like the offspring of an Errector Set, a department store bike, a bottle of cheap red wine, and maybe a faulty condom. The little power assist unit pictured above is much smaller and lighter, and actually pulls the chain through its body in order to provide drive. No word on if it is strong enough to allow riders to pull 200ft long power wheelies, but we suspect not. We'll hold off of testing one until it can do exactly that. All jokes aside, the little black box is actually a generator for the bike's lights.

Charge262 (Mar 7, 2014 at 5:19)
I'm using Joe's sealant at the moment as it's what we had in the shop. It's actually surprisingly good. If you ignore the knock off name, its actually good value, well working stuff.

BeardlessMarinRider (Mar 7, 2014 at 8:07)
Joe's has been around almost as long as Stans if not longer. At least been in the public eye for similar times. Not sure why seeing the name is so surprising...

chrisclifford (Mar 7, 2014 at 12:41)
I'm sure Joe's works fine, but they could have put a little more effort into choosing a different name

north-shore-bike-shop (Mar 7, 2014 at 12:59)
Yeah what chrisclifford said. It's just funny how close the name and graphics are and the story about how they said we don't know anyone by that name that got the lolz. Plenty of room in that market and I actually like the sound of more particles in the sealant for a more permanent solution. I have always found that the Stan's "scabs" can call out and you have your hole again. It's usually just a solution to finish your day/trip and you're off to the shop for a new tire.

Joe here might have just the solution. It's joe's solution to the Stan's solution!

BeardlessMarinRider (Mar 7, 2014 at 13:30)
Joes started as inner tube/ rim strips products even before sealant was widely used though didn't it? Not sure but it rings a bell.

thepwnstar39 (Mar 8, 2014 at 19:15)
I'm sure the Joe's fluid works great @Charge262, probably because the fluid is a copy of the Stan's product also.
If someone copied a Honda Civic and made a re-branded replica, I'm sure it would be just as good as a genuine Honda version. But you'd be stealing someone else's idea instead of innovating your own and contributing to the bike community. It's insulting to the company that put in the hard work and time to develop the original product, especially when Joe's is doing hokey stuff like the solid tire display and generously ripping off the Stan's logo. Bummer, but definitely not the first or last time this garbage will happen.

Charge262 (Mar 9, 2014 at 3:44)
Joe's has been on the market longer than Stans as far as I'm aware. Also, of you actually used the two you would be aware that they are not similar at all. Stans is much thicker. Don't know who pit the Bernice up your arse but no I think Stans are doing just fine, even with Joe's around.

hampsteadbandit (Mar 9, 2014 at 13:17)
Sorry charge, Stan's was doing good business with tubeless conversions years before joes came to market. We were importing Stan's 8 years before joes was launched, and stan's was in USA before we started importing.

reverend (Mar 7, 2014 at 18:49)
I like that the cutting chain is still attached. Makes trail clearing a breeze, and as for that @$$ who cut across you at that last intersection...

WAKIdesigns (Mar 7, 2014 at 2:32)
Matzocchi tyre was a personalized version of Nokian NBX which was just as worthless

WayneParsons (Mar 7, 2014 at 6:53)
those spider tires look like something Tioga would produce for the mountain bike market.

Odyssey Barefoot tires for BMX Freestyle bikes. I never owned a pair, but my brother and some friends did. They wore quickly and were prone to flats. But they were fun, and didn't perform too badly when they were new.

RatHunter83 (Mar 7, 2014 at 9:14)
Groghunter-yes they were normal lug size but cornering feel was horrible. Think about taking a corner and only the lower points of the "M" digging in and getting traction. And they weren't tall lugs either,at least mine wasn't.

groghunter (Mar 7, 2014 at 9:28)
Yea, that don't sound too good. Also with those pointy lower corners on the M, they probably couldn't make the lugs too tall, or they would have ripped off in the first ride.

demery86 (Mar 7, 2014 at 1:40)
I don't get it, why if your at a bike show with loads of weird pimping contraptions would you fit your electronic drive system to a total shi**er, doesn't exactly attract the eye..

WAKIdesigns (Mar 7, 2014 at 1:19)
At first I thought that it was a "smart" chain guide, so good and reliable that it could render the narrow wide chain rings useless...

fracasnoxteam (Mar 7, 2014 at 3:06)
No! Absolutely not! It's an original patented product from Trekialized and made by Steevy "Wave Deagle" Jobs san.

ridesmoothbro (Mar 7, 2014 at 3:16)
Kind of surprised that this show gets a bunch of attention even though it is well known that there may be some "infringement" going on each year. Yea I see that there is real innovation from real companies but still....

mattibart (Mar 7, 2014 at 15:19)
Ive got a job designing at a big uk bikeshow at the nec and were taking it a level above Taipei by having a huge pile of elephant shit with a chainring stuk in it and a new brand of cycle called specializts

auzzy-man (Mar 7, 2014 at 8:40)
First ride with that electric motor assist and it'll break off, guaranteed. What a bunch of shit

tkrug (Mar 7, 2014 at 7:48)
Probably out of frame driving the cranks to demonstrate that the little black box gizmo is indeed generating power for the lights.