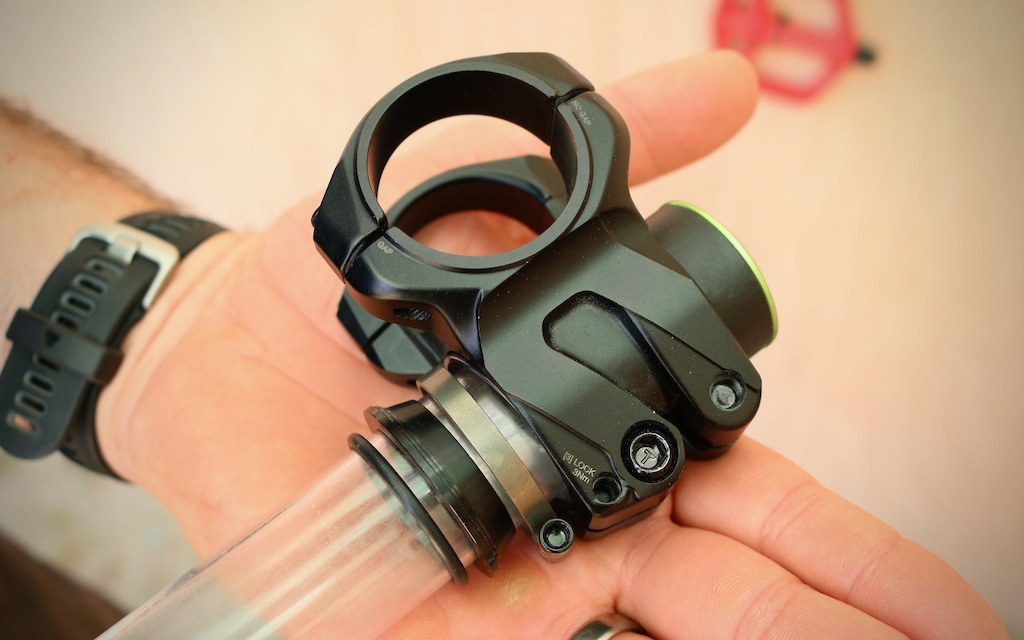 Leave it to the guys at OneUp to show something clever. I already looked at their new EDC stem earlier today on a video, but let's check out how it works and why it might make a lot of sense. The idea is to skip having to smash a star nut down into your steerer tube or, if you use their EDC tool, to not have to cut threads into its steerer's inner wall.

It's simple in how it works: There's a threaded collar trapped under the stem (it's invisible when installed) and a conical washer that goes under it but on top of your headset. When you tighten the collar's screw, it pushes the conical washer down to take up extra room and compress everything.

When you install the stem, you push it down by hand; then you should only need to take up a few millimeters with OneUp's preloading washers. Threading the inside of a steerer tube isn't a big deal, but you know suspension companies aren't a fan of that move. Now you don't need to do that to carry an EDC tool inside your steerer. There's an extra bolt to tighten with this design, but you're also losing the star nut and its preload bolt. 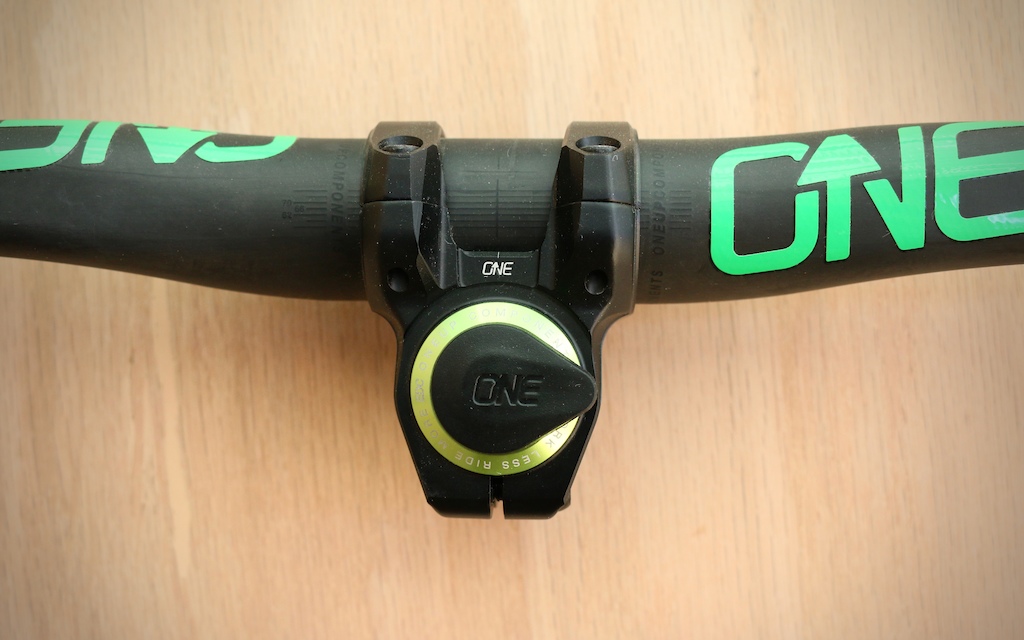 Now you don't need to thread the inside of your steerer tube to carry OneUp's EDC tool. 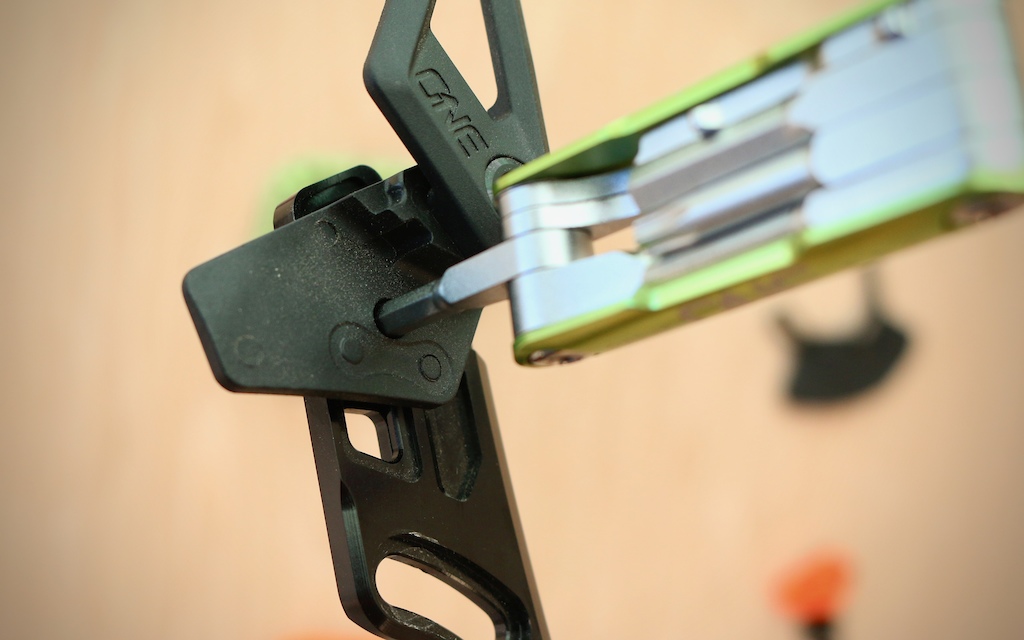 All you need to do is lower the slider until the 4mm hex key touches the top of the chain. Tighten the bolt and then it should be bang-on at the right height.
OneUp has also tweaked its chain guides to make setup as easy as possible. The upper slider has the image of a chain link molded into it to help you set it to the correct height, but it's even more of a no-brainer. When you put your 4mm hex key through the slider to snug up the bolt, all you need to do is lower the slider down until the hex key is resting on top of the chain, then you tighten the bolt and it should be in the best spot and not rub on anything. Pretty clever. 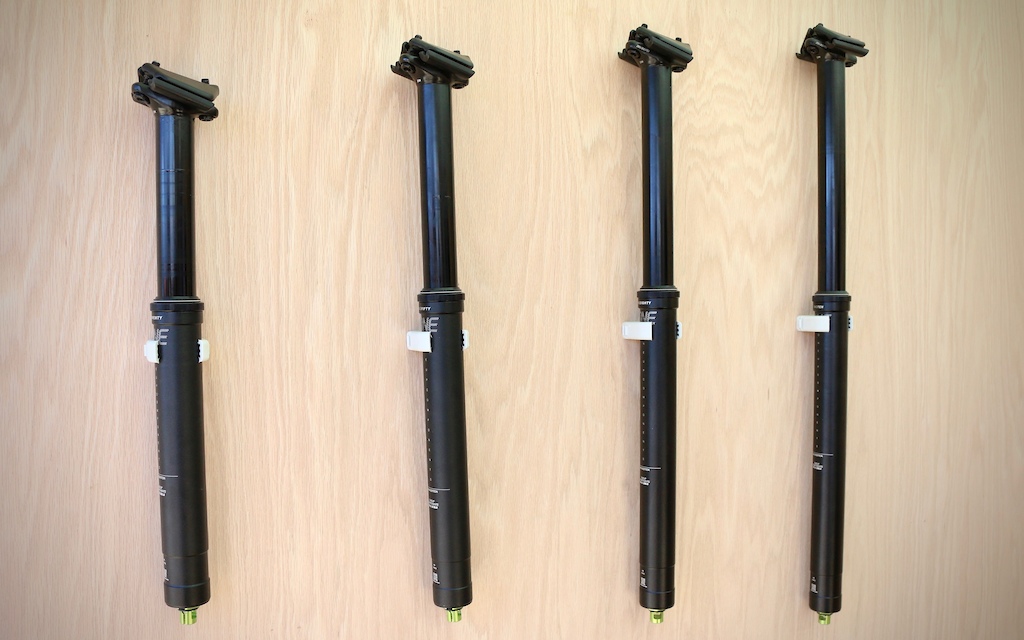 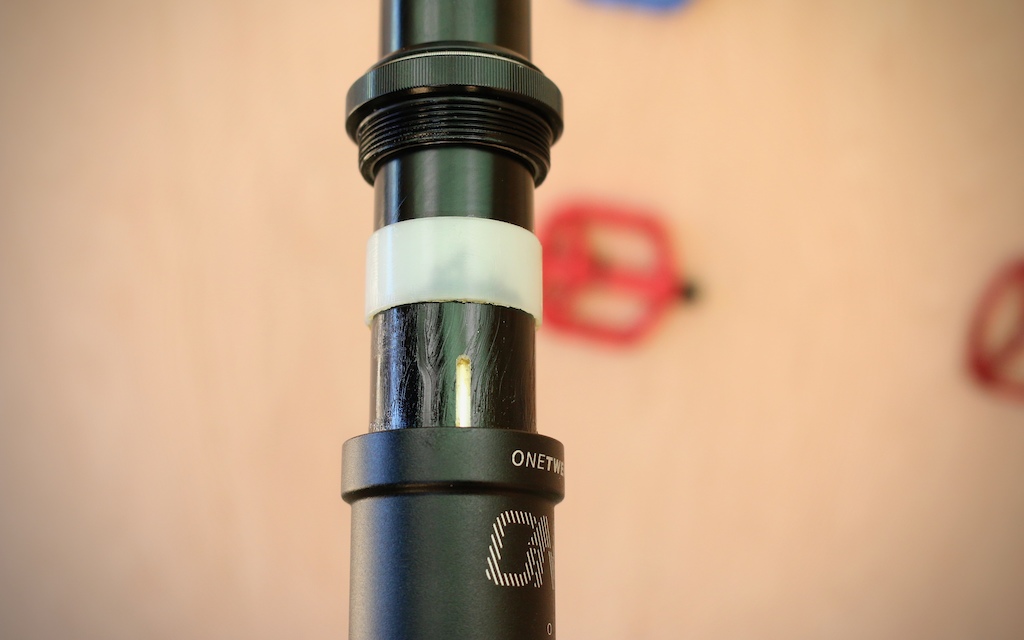 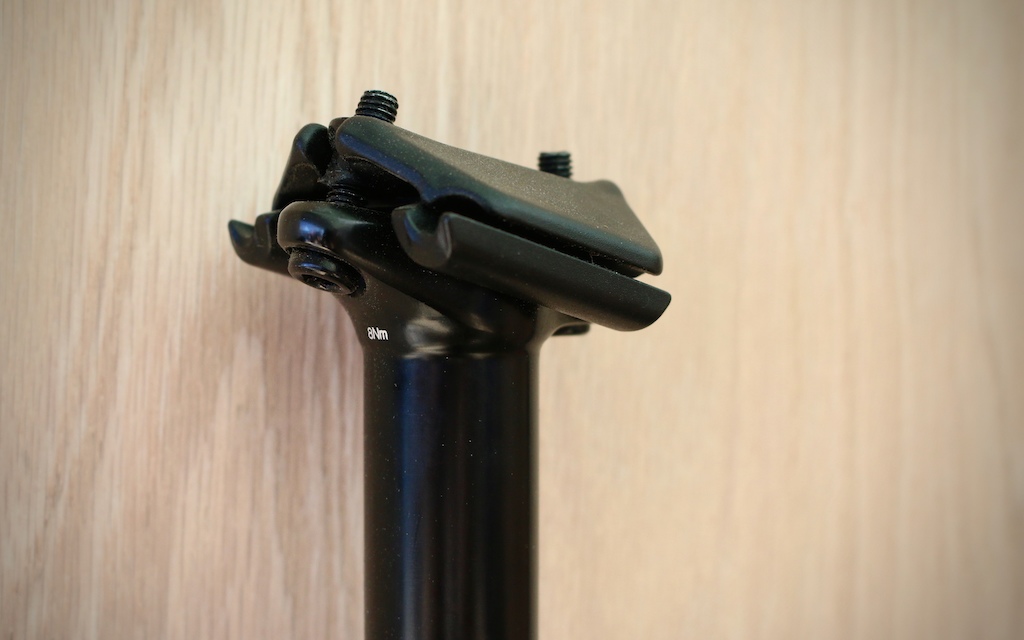 OneUp's dropper post has been getting a lot of positive feedback - I've had a 175mm version for months and it's been trouble-free - but they've made some notable changes to the design for 2019. Internally, it uses the same cartridge and activation system, but they've managed to take a bunch of height out of the design (22mm of the 150mm model) so that riders can get as much drop as possible. That came from a lower stack height clamp and seal head.

The plastic shim system that you used to change the travel is gone, too, with that job now being done by adding extra anti-rotation pins into the slots. There's less adjustment range now, but it looks like a more robust layout. 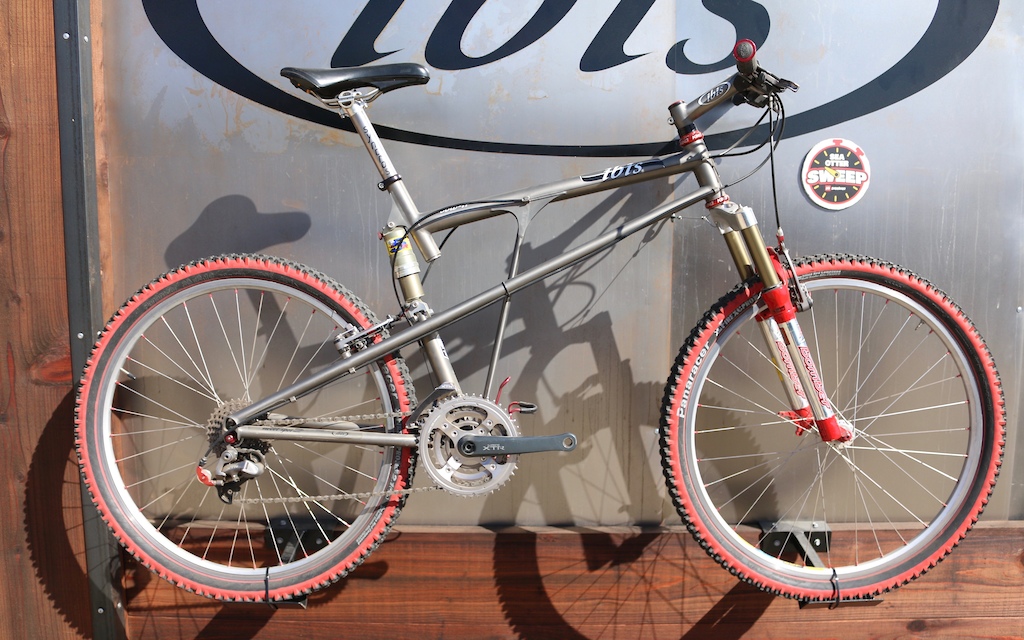 All the titanium, none of the pivots. The 120mm-travel Ibis Bow-Ti is still the stuff that dreams are made of.

Ibis has been releasing fresh bikes non-stop over the last few years, but it was their titanium Bow-Ti from the 1990s that stopped me in my tracks at Otter. I wasn't the only one, either, with a constant stream of people putting on the brakes to stare. The bike came from the mind of John Castellano, and the pivotless titanium frame offered 120mm of travel and cost $3,500 USD. Those were huge numbers back in the 1990s, by the way. We make jokes about URT (unified rear triangle) bikes these days, but this stuff was the thing of dreams when it debuted and it still is for a lot of riders. 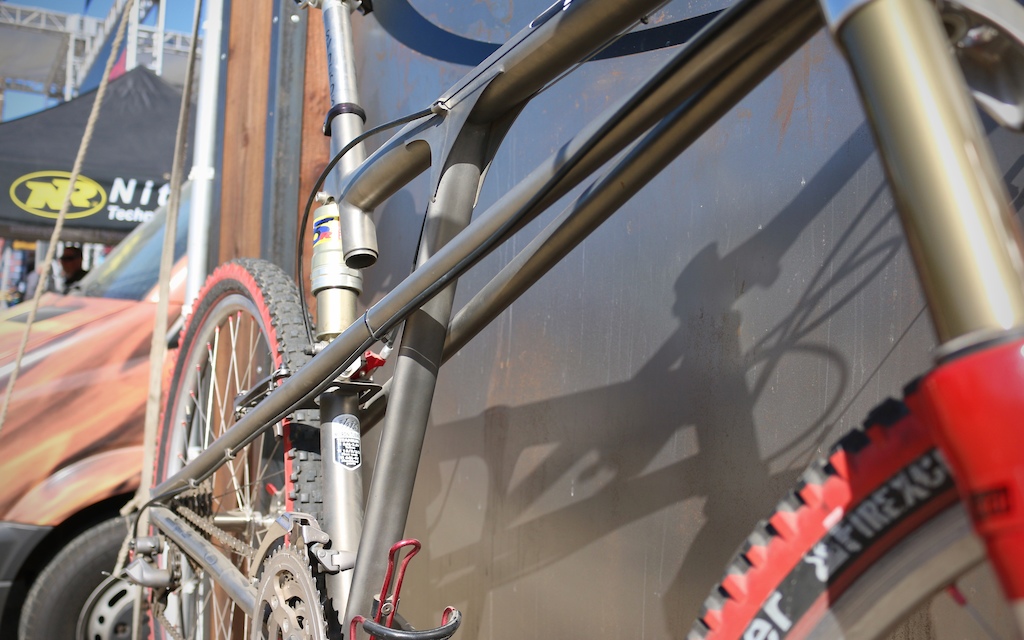 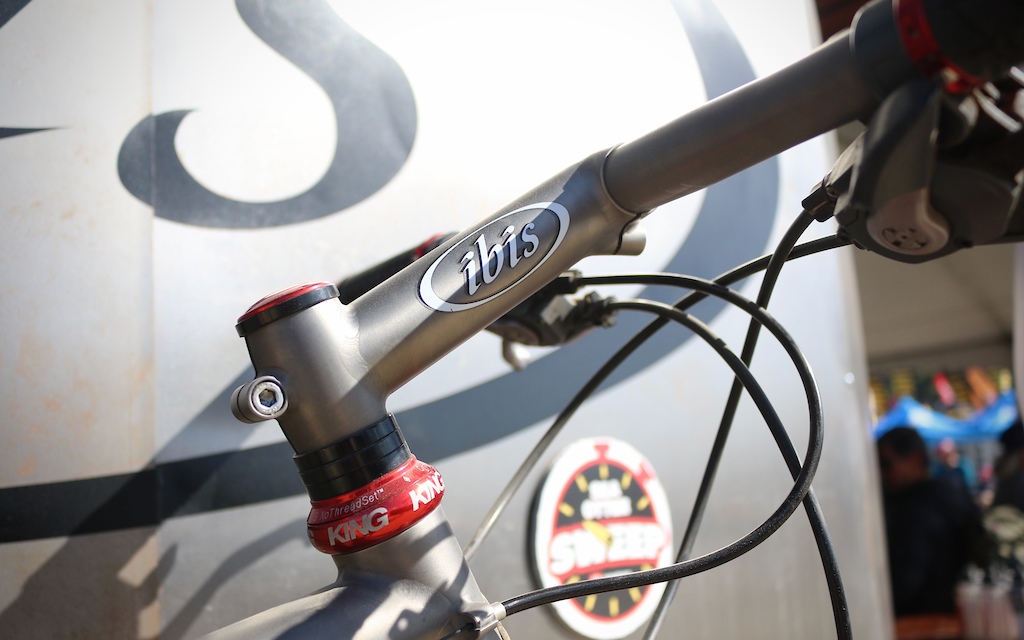 The titanium tubes were designed to flex vertically but be rigid enough laterally. 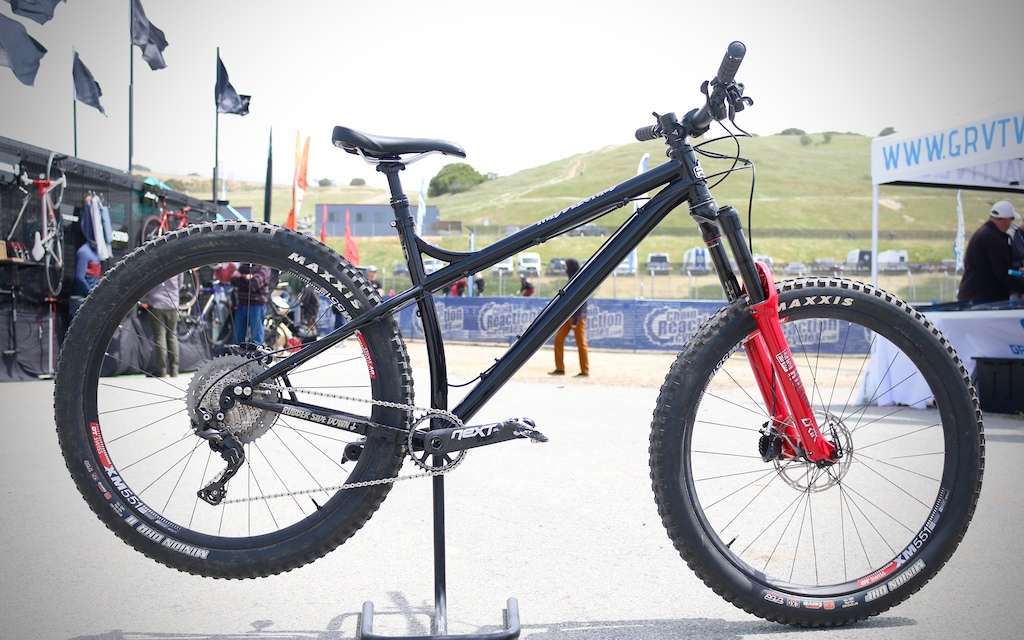 More titanium, this time from RSD, but very different geometry compared to the Bow-Ti. Think enduro without rear suspension.

I'm a bit conflicted about the painted titanium, but RSD's MiddleChild is a looker regardless. They've been doing the steel MiddleChild for a while now, and word is that this Taiwanese-made 3AL 2.5V titanium version weighs 5.2lb, or nearly 2lb less than its steel brother. It's only going to be made in limited quantities, though, so don't dillydally if you're in the market for an exotic, enduro-friendly hardtail. You'll also need $2,199 USD.

They've used adjustable dropouts to get the correct geometry for both 29'' and 27.5+ wheels, and the front-end sits at 64.5-degrees with a 140mm-travel fork installed. It has a steep 74-degree seat tube, and the large-sized frame gets a 465mm reach as well, so it's definitely on the forward-thinking side of things, rear suspension or not. 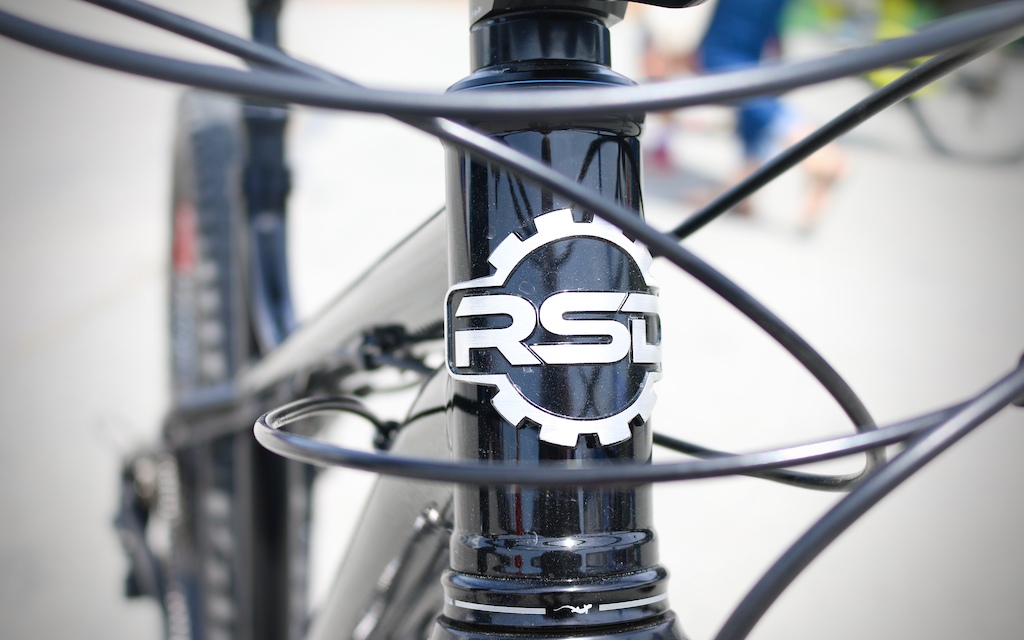 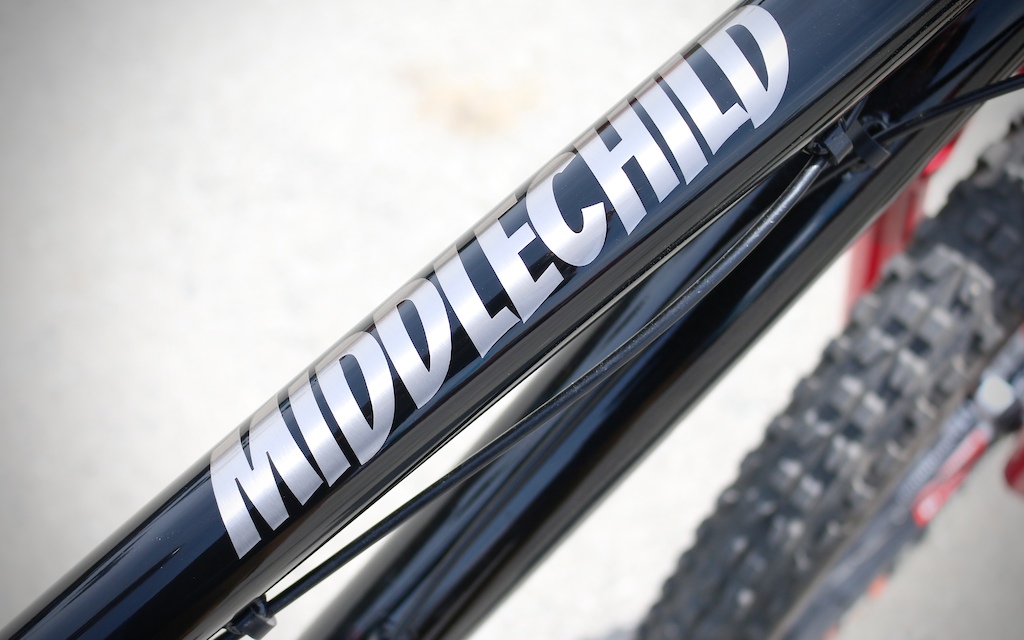 The black paint is lasered off the frame to reveal the titanium underneath.

savagelake (Apr 13, 2019 at 16:32)
my exact thoughts. and fix the spades comment makes me think of the original video for that song. if anybody here has not seen it, do urself a disservice and google it.

rezrov (Apr 13, 2019 at 21:24)
@FrantikLex: You mean in the one spot where they etched out Middlechild in that Indiana Jones font? To each their own

RSD-Bikes Plus (Apr 14, 2019 at 8:05)
We made quite a few raw Ti frames in the past and while we love the look of Raw Ti, we wanted to do something different for this frame, hence why we painted it but left out of the raw ti underneath the logos

mixmastamikal (Apr 13, 2019 at 14:48) (Below Threshold)
Compared to the one up threaded top cap it is incredibly sloppy.

I get ya though. I'd rather run a threaded steerer than the new stem. The design is a bit fussy for me.

tobiusmaximum (Apr 14, 2019 at 0:34)
i think Alan Watts has a whole bit about star nuts and the beauty of the inevitable struggle of life.

pinnityafairy (Apr 15, 2019 at 6:47)
@SonofBovril: because this industry wants you to be able to use nothing you already own go out and spend all your money to buy the new stuff it's no better than the old stuff this is the bicycle industry

slabhardcheese (Apr 15, 2019 at 10:10)
@sonofbovril: because the stem is what captures the actual multi-tool. Unless you want to add an extra part into the mix, it’s simpler to add it into the stem.

@oldtech
Not sure what the complaint is in this instance. No special tools. Want their edc? Hide it in their pump and attach it to literally any bottle cage. Want the integration, it works with your existing steerer and headset which both remain unmodified.

pinnityafairy (Apr 16, 2019 at 6:39)
@slabhardcheese: my complaint is just at the industry as a whole constantly changing sizes and standards. Nothing directed towards this product specifically. I would just love it if once you invested money in several of the same products the company would support it with service products for a minimum of five years. Seems every time you try to use a warranty in this industry lately on a product that is more than 12 months old the warranty is completely freaking worthless. They will either replace it with something that does not fit or just give you BS sob story that there's nothing available. Let's not even get into the part about wear and tear service items. I just think everything should be serviceable for at least three to five years after it is purchased. Nothing like purchasing a 2017 bike in 2018 new and a year later there's nothing available to fix it right.

thesharkman (Apr 13, 2019 at 16:11)
OneUp has done the unthinkable with their product line and pricing... they've actually left no doors open for legit trolling. Maybe the first company in the bike industry to pull that off.

oldfut (Apr 13, 2019 at 15:56)
Spent a year riding behind a bow-ti. Jesus did that thing flex like a sumbitch. Never seen a bike move in so many planes at once. It was pretty cool though.

BobbyHillbomb (Apr 13, 2019 at 14:43)
At least this stem solves my problem of having to track down hideous hollow stem caps/star nuts so I can barspin my trail bike.

thesharkman (Apr 13, 2019 at 19:57)
And the reason people live with it is because we age enough in that time span to where it doesn't matter to us by then. The younger generation will pay the inflated prices because it's all they'll know. The rich get richer and the poor get older.

jddallager (Apr 13, 2019 at 16:05)
Titanium is beautiful without makeup. Why add an extra processing step or two to cover up ... then remove the paint (for the logo and brand) ...the titanium? Costs more and adds to the esthetics. Oh, there ya go!!

PHeller (Apr 14, 2019 at 7:13)
Pretty crazy that for the same $2200 as that titanium frame produced in Tiawan, you can have a carbon full-suspension frame manufactured in Colorado by Guerrilla Gravity.

Ive always like RSD but their value drops after you leave the aluminum models.

I remember when I first saw the prices of some custom USA made steel frames and was aghast at the pricing, but $2000 for a full custom 4lbs-6lbs steel WaltWorks doesn't sound so bad anymore.

mgs781HD (Apr 13, 2019 at 14:35)
Seems like you could just use the collar off the EDC stem to use your(a) conventional stem and get the same effect to tighten the headset. Sort of like an adjustable spacer.

estelja (Apr 13, 2019 at 15:19)
Or just get this Problem Solvers adjustable headset spacer: problemsolversbike.com/products/headset/adjustable_spacer_-_6547

shoplife (Apr 13, 2019 at 20:54)
I have a custom painted TI hardtail. Scratched the hell out of it in the first month. Worst decision I ever made for a finish. Titanium can be sanded and polished making it look new....paint just gets ruined.

FatTonyNJ (Apr 13, 2019 at 15:41)
Creamed my riding shorts over that Ibis. I bought a Catamount because I wanted an URT, but could not afford that one. Regretted it.

kevmocal (Apr 13, 2019 at 17:32)
Still have my old Catamount built up with 1995 XTR and a Judy SL. Swapped the parts in off an old Schwinn Sweet Spot (also from the mind of Castellano) when the pivot bushings finally wore out and I couldn't find a replacement...

Every once in while I'll throw a leg over it and can't believe how far the bikes have come...

stiingya (Apr 13, 2019 at 19:50)
They should have done a lot more lasering the paint off. Titanium showing beneath is awesome, but moar!!

FrantikLex Plus (Apr 13, 2019 at 21:06)
It's a rowdy frame, therefore it needs to be solid and stiff, and not ride like a noodle. custom yoke and adjustable dropouts

mixmastamikal (Apr 13, 2019 at 14:47)
I agree, I have it on multiple bikes now, even my DH bike and just swap the tool to whatever I am riding and it is just a better system irregardless of the convience the tool provides.

mixmastamikal (Apr 13, 2019 at 19:31)
@bart882: it is truly an archaic method compared to threading the steer tube. People are hating on my comments stating this but its the truth whether people like it or not.

thesharkman (Apr 13, 2019 at 16:16)
Dear Google, not everyone has the aptitude to seek you out but it doesn't change that they still seek answers. Please help @buggyr333 with "RSD Middlechild steel frame weight".... size large: 6lbs, 14oz.

Buggyr333 (Apr 13, 2019 at 20:34)
I guess I overestimated the people's intelligence and ability to infer what I meant. But hey, this is the internet after all.
Below threshold threads are hidden

aceface17 (Apr 13, 2019 at 14:16)
I love oneups products, I have some pedals and a seatpost. but I cant help but feel that they have made a very simple product (stem) unessecarily complicated..
Post a Comment