We're only a few hours deep into the first day of Eurobike's 2017 show and it's already obvious that there's not a whole lot to be seen here that hasn't already been shown, a few hundred e-bikes aside. Something did catch my eye at the Scott booth, however, with a sliced up Genius that was attracting quite a crowd of oglers. There's something about cutting a component in half that seems to get our attention, probably because it's a chance to get a view that we'd never otherwise see without throwing away a few thousand dollars of our own money.

Taking a close look at this cutaway Genius reveals a few things. You can see where Scott has used additional layers of carbon - look up at the head tube area, and especially around the headset bearing bore. It's also a chance to see the frame's cable routing and Di2 battery storage in action. No word on the total weight savings of cutting a frame and shock in half, but it's probably substantial... and unsafe. But it sure is neat to look at. 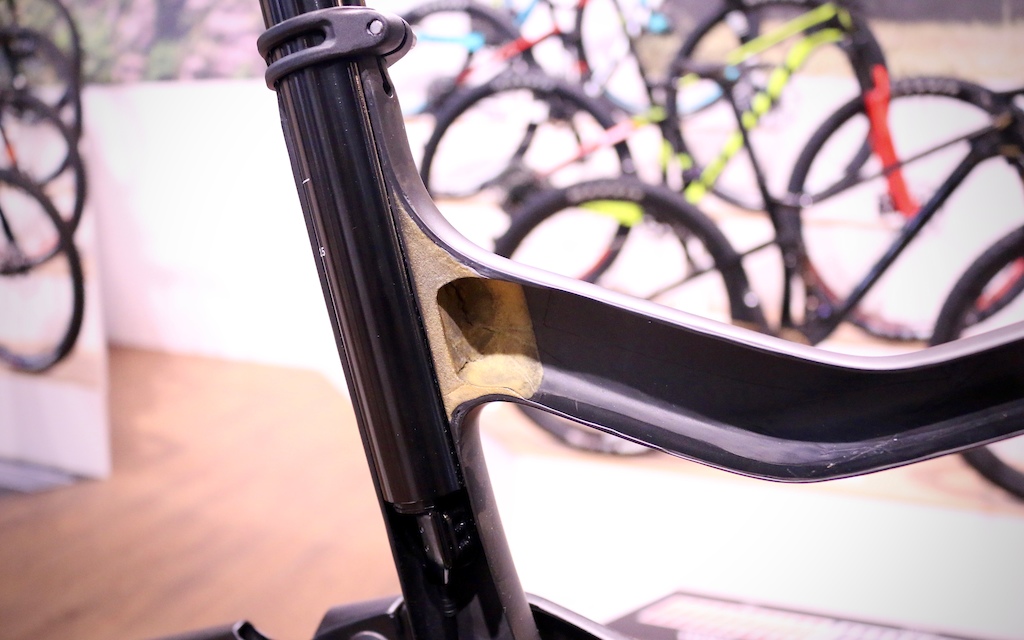 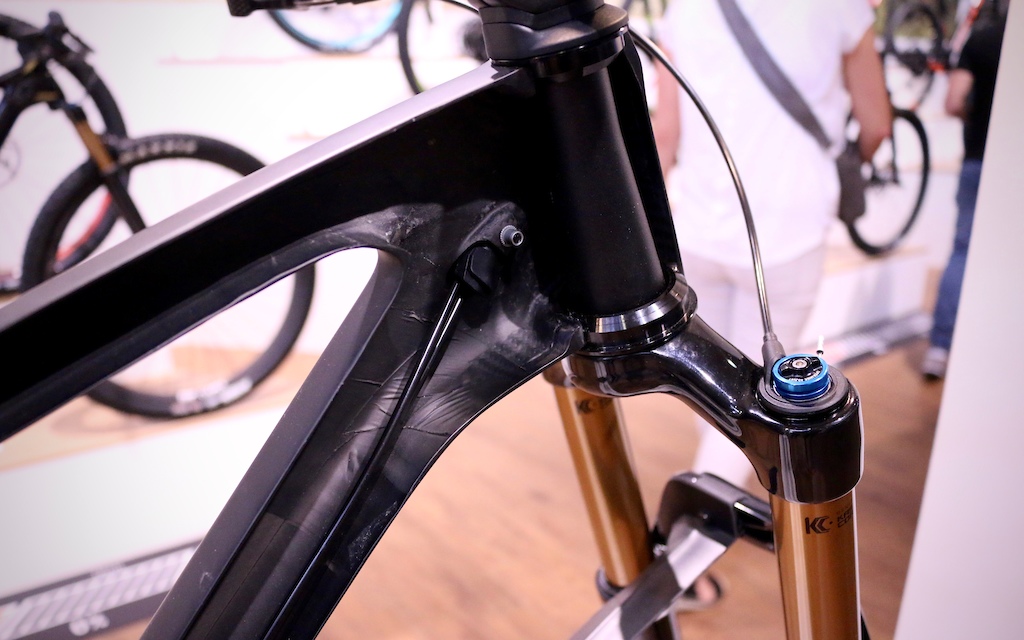 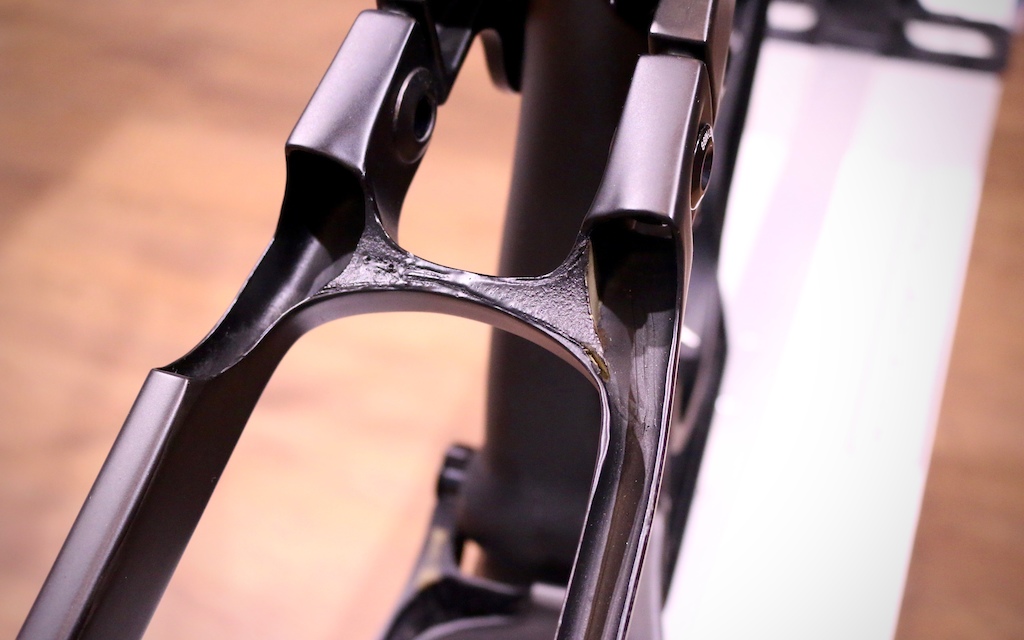 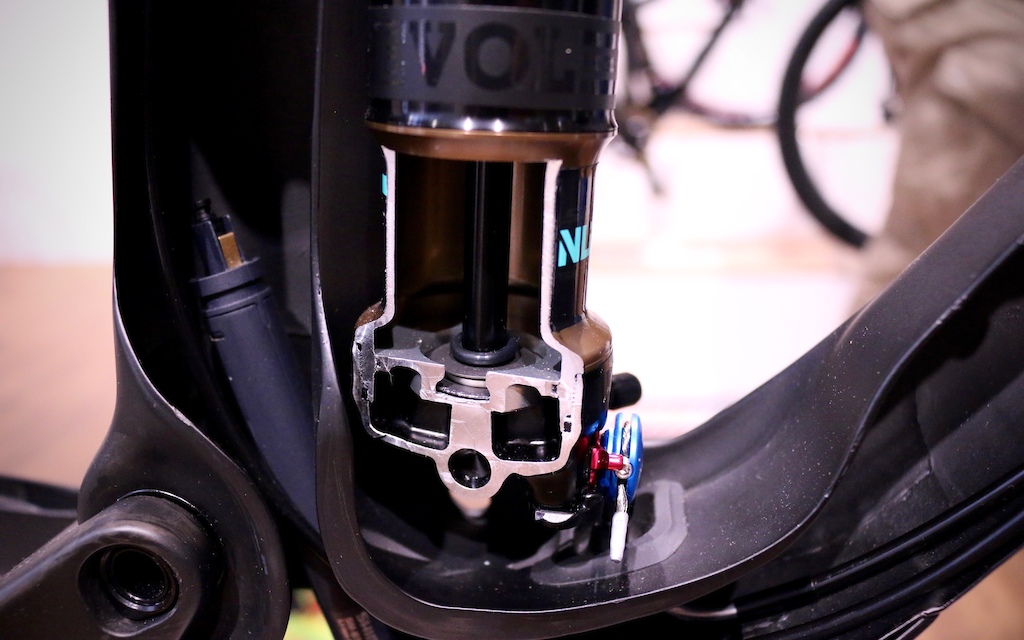 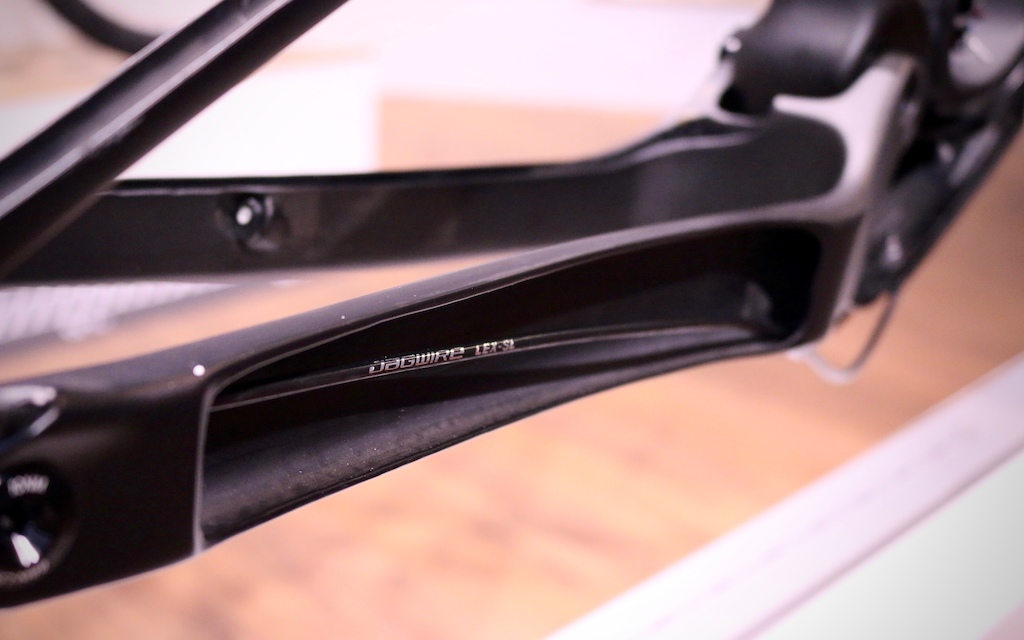 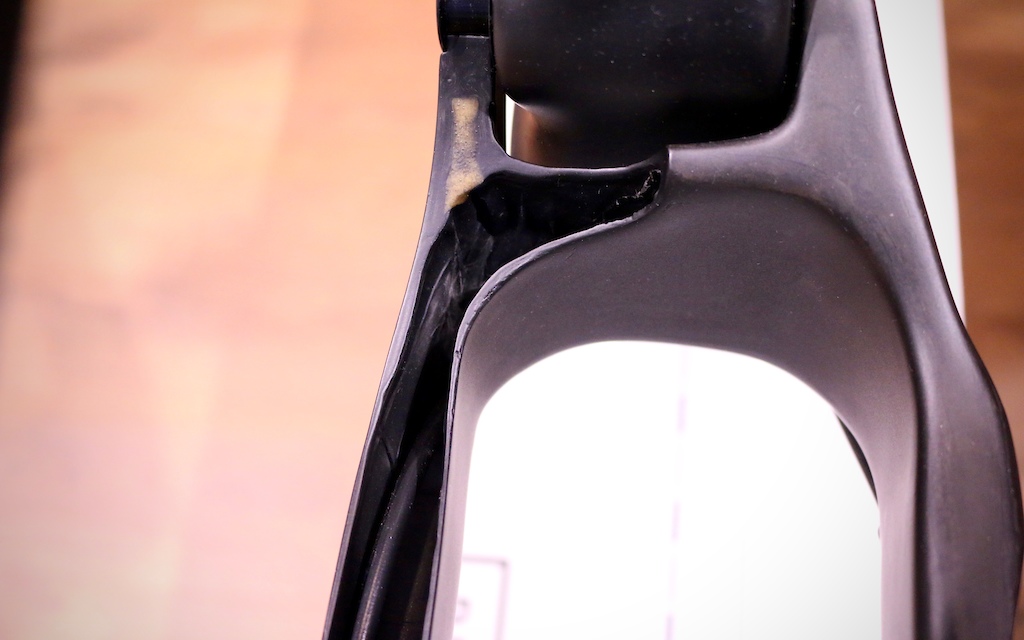 richierocket (Aug 30, 2017 at 15:11)
That's cutting it pretty close when considering the weight to strength ratio.

sledMXer (Aug 30, 2017 at 8:05)
I want to know, or better yet, see how they cut this stuff in half and not have ragged edges, etc. I've seen some motorcycle components cut showing the internals, and am always amazed at how they can do it and have the cuts so perfect and straight. It isn't some monkey with a dremel, that's for sure.

vinay (Aug 30, 2017 at 9:09)
They probably need the dremel after the cutting. It's all carbon, no aramid so it is actually doable do cut it and then polish. Unlike aramid or a carbon-aramid hybrid. It would only get all fluffy. Those Fein type tools do a great job too at cutting laminates.

Poulsbojohnny (Aug 30, 2017 at 8:22)
Looks less like extra carbon build up and more like some other material has been placed in the areas of reinforcement. It isn't carbon. Looks like some sort of resin mix. This isn't necessarily a bad thing. The extra material will prevent flexing and compression by filling the void.

twozerosix (Aug 30, 2017 at 9:34)
You talking about the seat tube/top tube junction? I was wondering about that brown gunk.

thom (Aug 30, 2017 at 13:27)
that's usually an epoxy fairing material designed to increase the radius of the tube joint. Reducing the radius in those locations reduces the stress concentration in those areas. Consequently, the layup is probably easier as well.

trialsracer (Aug 30, 2017 at 12:52)
Wow, this looks so much better than the carbon cutaways from ten years ago. I know this is an obvious statement, but all I can think about looking at that frame is "holy shit our carbon manufacturing has really leveled up"

WAKIdesigns (Aug 30, 2017 at 4:54)
I would to hear what Raoul Luescher would have to say about this. That seat stay bridge doesn't look like something to show off with pride

MTBLegend92 (Aug 30, 2017 at 8:03)
Exactly what I was thinking. I think the seatstay bridge has some sort of filler to give it shape, which is why it looks rough, there do seem to be quite a few wrinkles near the headtube junction though.

@MTBLegend92 - I didn't mean the foam filler I meant inconsistencies in wall thickness which are not just about more material in certain places it looks like lots of resin where it shouldn't be.

MTBLegend92 (Aug 30, 2017 at 20:51)
@kanasasa: Go troll somewhere else. Waki literally said he'd be interested in what the opinion of someone who IS a carbon expert, with over 25 years of composite manufacturing experience, would be on the inside of this frame. Just because you don't know what you are looking at doesn't mean nobody does.

rabidmonkfish (Aug 30, 2017 at 5:16)
how much will these be (the complete bikes) been waiting a while but haven't seen anything so far..... mostly interested in the second from top model.