Looking after a legion of racers, from the top professionals who need shock re-valves to amateurs who are just asking for a set of brake pads, requires quite an investment on wheels that needs to be able to show up at different venues all over North America. For SRAM, this called for a custom Freightliner truck and trailer that serves as home base for their race mechanics at cross-country, downhill, enduro, and slope events all over North America.

Last weekend saw Big Red make an appearance at round five of the Enduro World Series in Aspen, Colorado, before starting its journey up into Canada to another famous ski resort that you may have heard of before: Whistler. As you might expect, a unit this large isn't just a plug-and-play sort of thing when the team does arrive at a new venue, with it taking most of the day to set up, which is the job of Evan Warner, John Dawson, Chuck Perryman, Keaton Ward, and whoever else is on hand.

Inside the truck, you'll find bits and pieces for every single SRAM and RockShox product that might ever need servicing, from the smallest bearing to entire shocks, forks, and wheels - remember that the guys in this truck have to be just as prepared for a professional cross-country racer in need as they do for an amateur slope rider. In other words, it's a rolling warehouse, but Evan and co. also do enough custom work that a small lathe is also on hand that's used to manufacture one-off shock hardware or anything else that isn't readily available. Suspension service, both routine maintenance and custom valving, is also done in the truck, and there's even a portable hand dyno, built using an old BoXXer chassis for a leverage-providing handle, to double check shock bleeds. 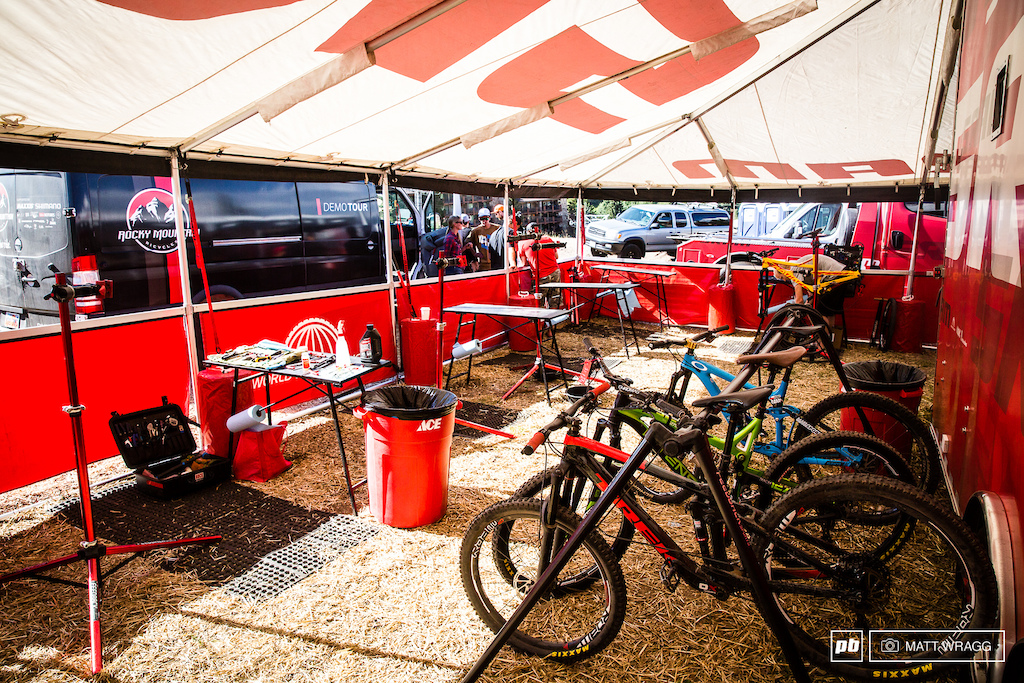 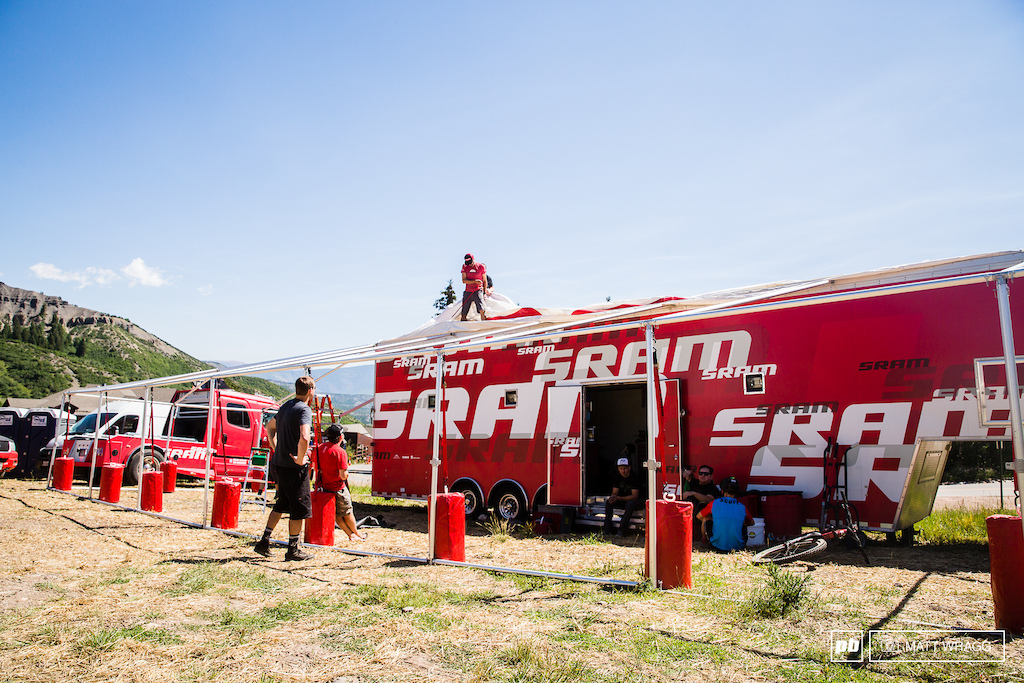 Setup can take most of the day, but it's a refuge from the sun or rain once it's completed.

You better have a red shirt on or be a sponsored athlete if you're in here. 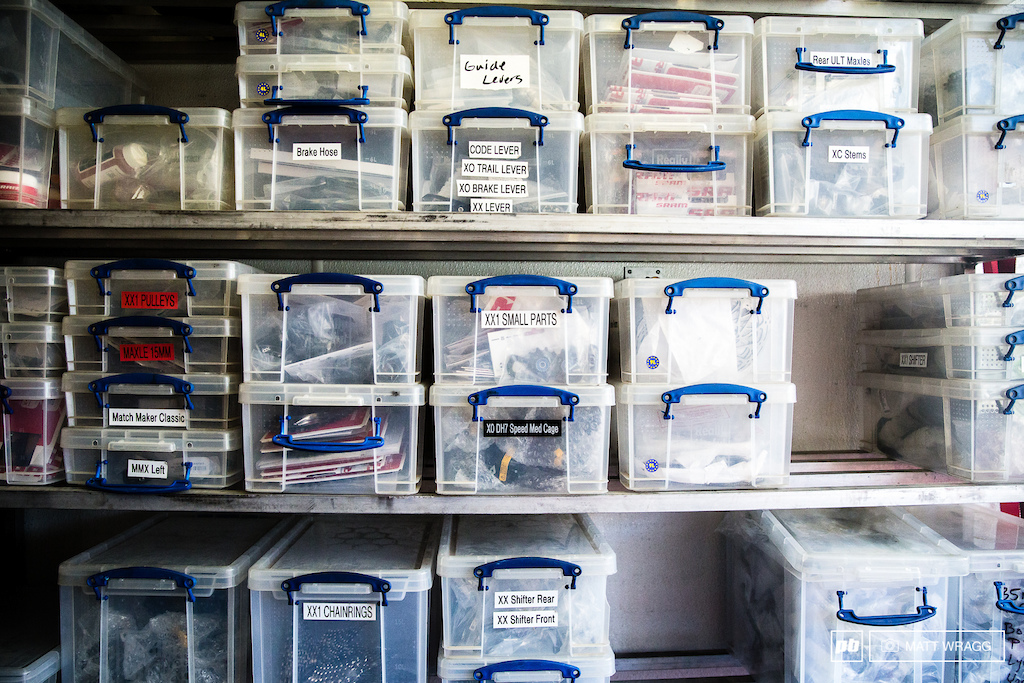 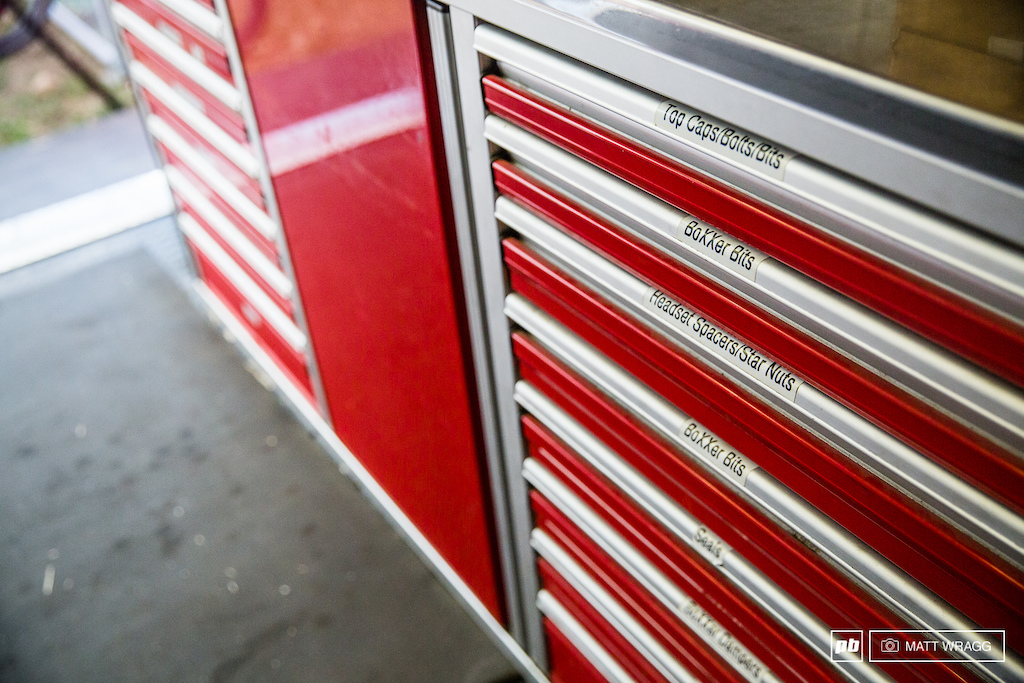 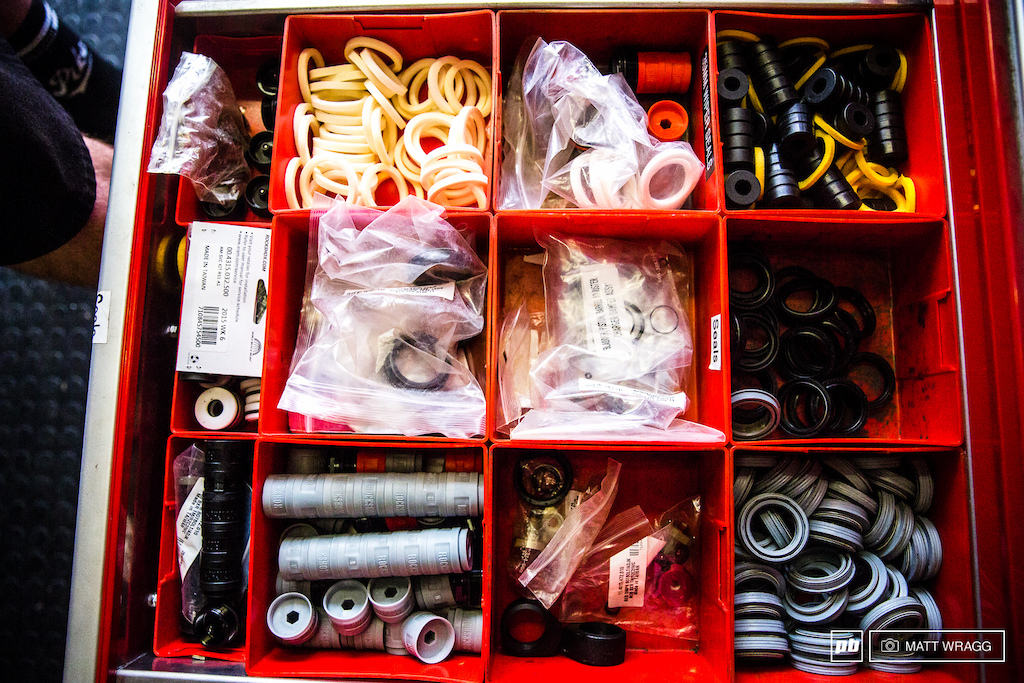 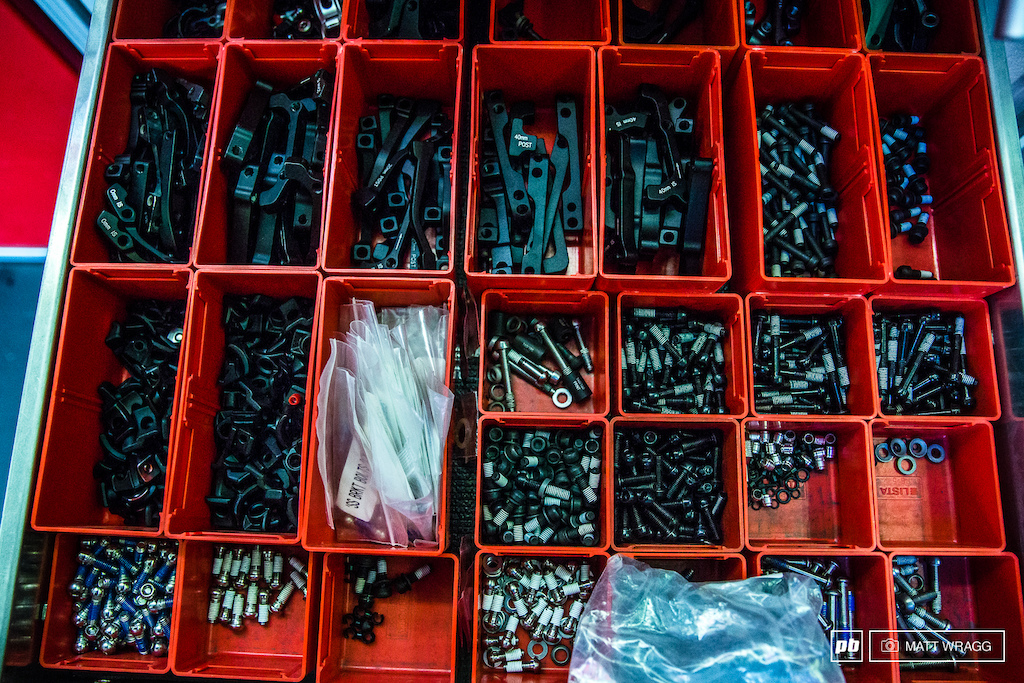 Need an M4 bolt, one foam ring for your 32mm BoXXer, and a MatchMaker X clamp? You've come to the right place.

''I've bored this out twice and it's still too big,'' I said the last time I used one of these. Yeah, I don't think they'd let me play with it. 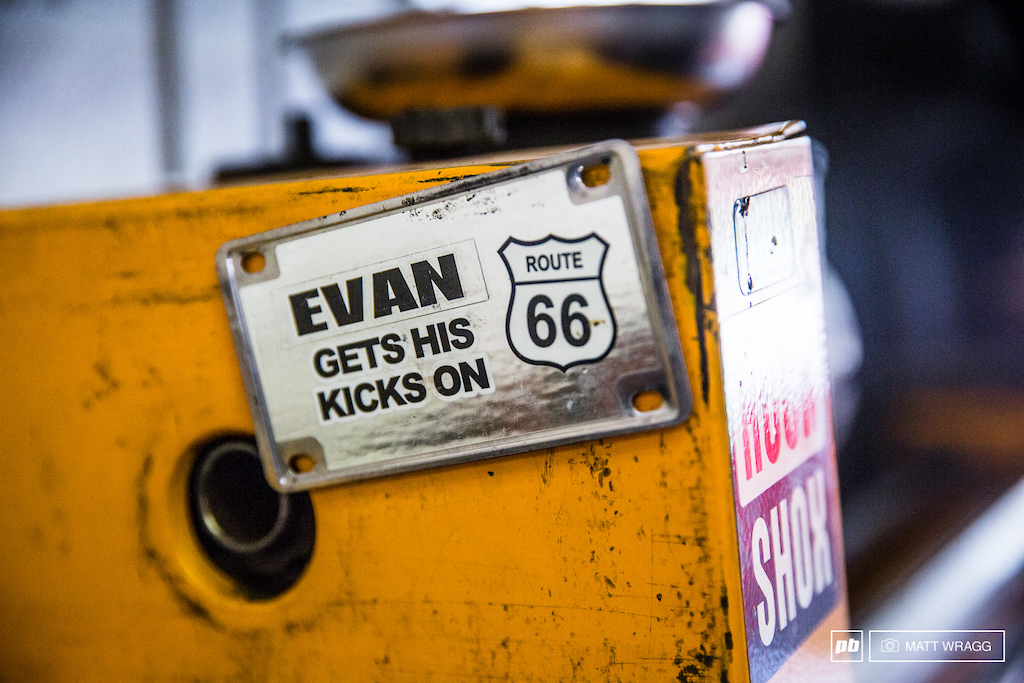 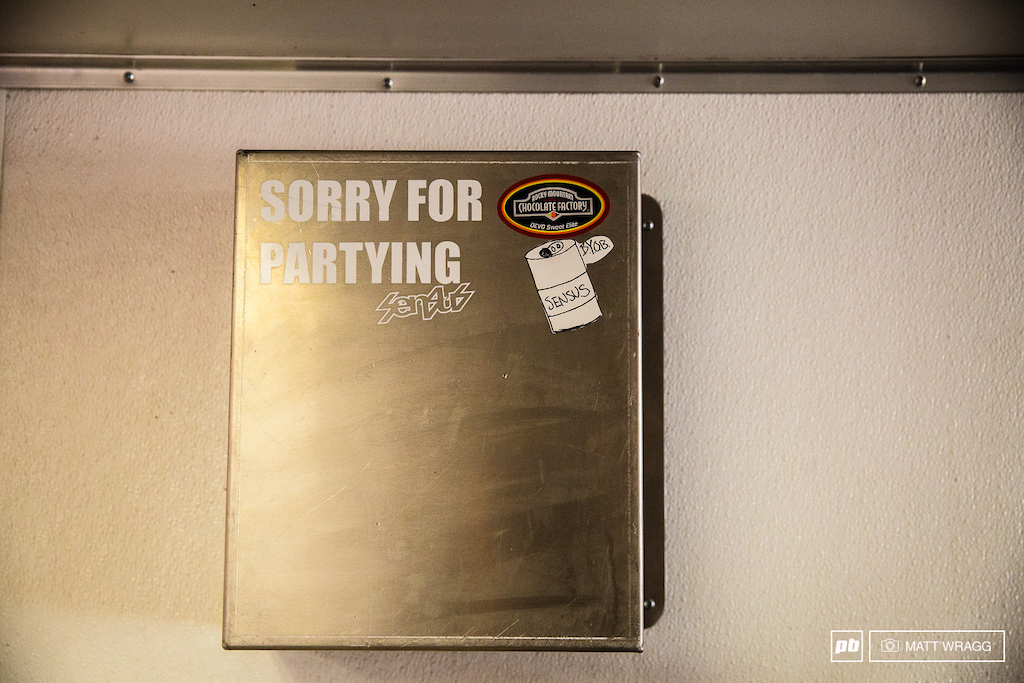 This hand dyno was made to check that shock bleeds are free of air. Yes, that's a BoXXer being used as a handle. 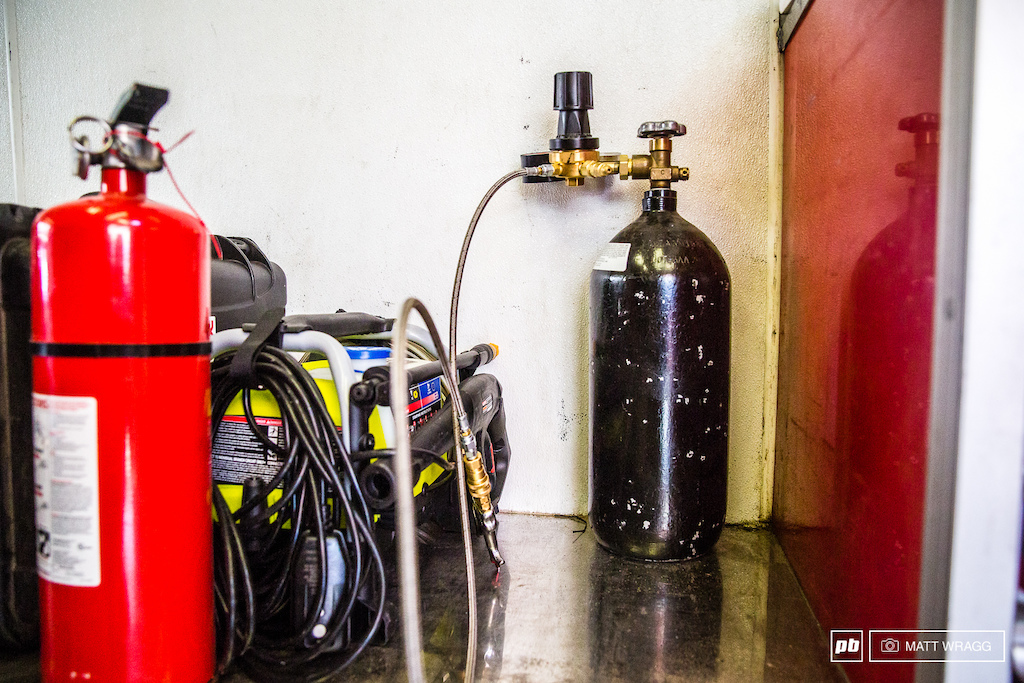 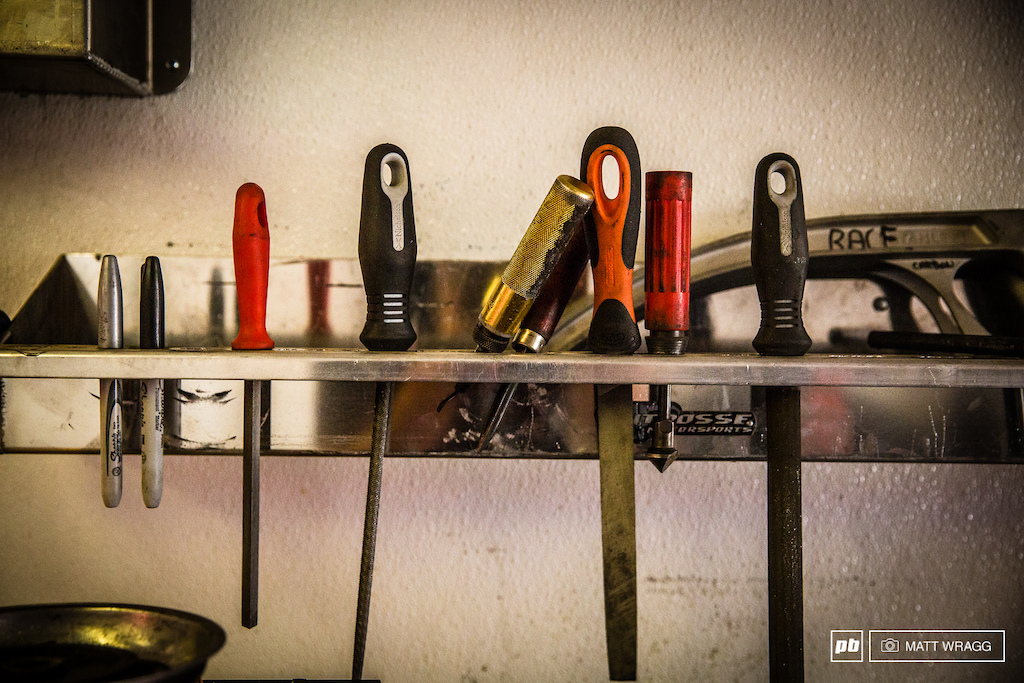 A nitrogen tank and every hand tool under the sun can be found in the trailer. 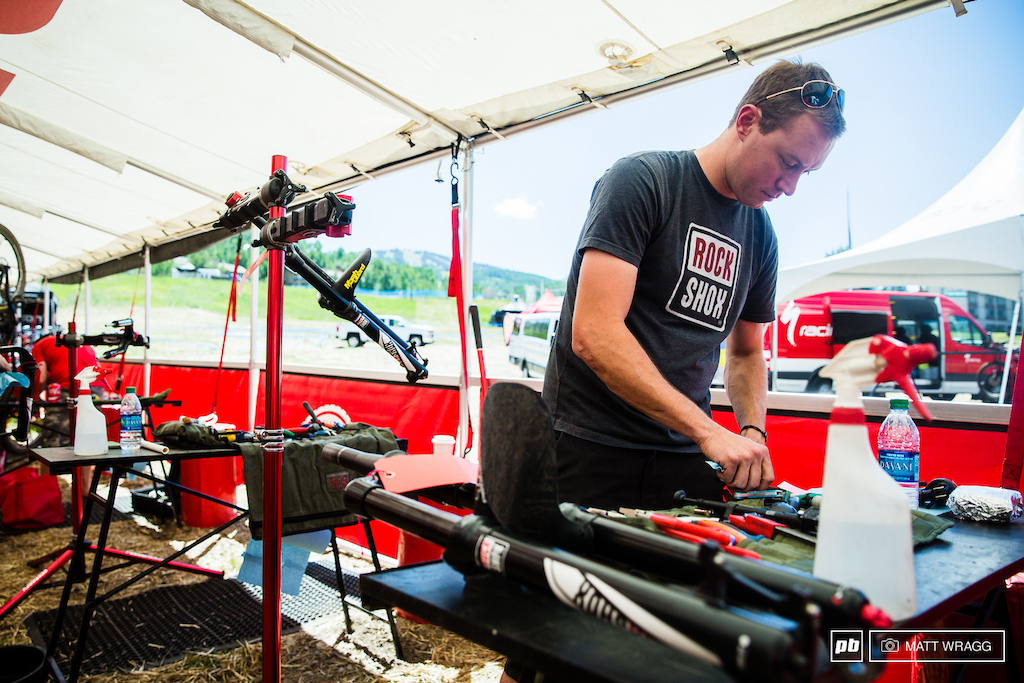 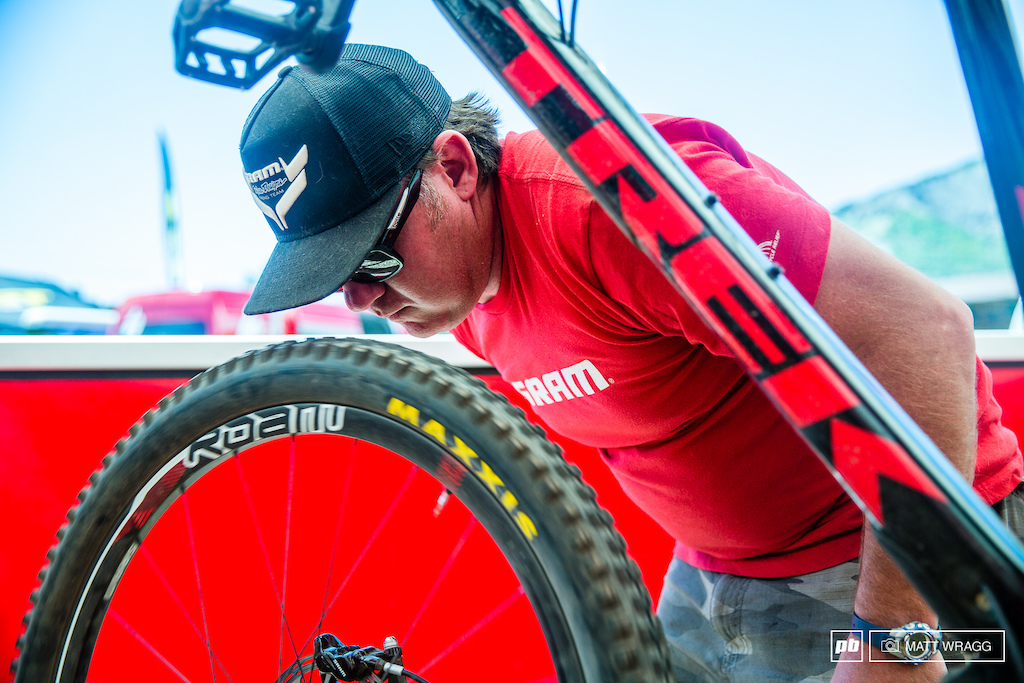 Need some emergency work done in a crunch? Rumor has it that bringing a small bottle of whiskey can speed things up.

rocky-mtn-gman (Aug 2, 2016 at 13:21)
@racecase: i raced an enduro in vail, bunged my bike up but finished. took my bike over afterwards with a few ice cold coors and these guys got my shit back in order in no time. really laid back and i got to meet this awesome old local guy by the name of "frenchie" who was an absolute riot. guy had to be nearing 80 and did the vail outlier enduro...sidetracking here but yeah these sram guys are totally cool guys who do awesome work and this rig they have set-up is pretty badass too.

salespunk (Aug 2, 2016 at 13:58)
Fox is obviously a much smaller operation compared to Sram, but I have gotten great support from them at multiple events including full tear downs/rebuilds etc and I am not a sponsored rider.

Don't get me wrong, Sram is fantastic and I have used them a bunch, but their support is no different than Shimano and others.

Bobby12many (Aug 2, 2016 at 15:14)
Kudos to those at SRAM who handle the bordercrossing documents for this team. Taking inventory of, classifying, and declaring all of those small parts and remaining compliant with US/MX/CA regulations is no easy task.

the11firm (Aug 2, 2016 at 16:10)
Needed a thru axle this weekend after I managed to snap mine in half during practice on Friday. Needless to say, it only coast me a six pack!! Was flirting with the idea of a 36 and an X2 for my next bike but after this weekend, I'll be a loyal rockshox customer. Thanks for helping out an amateur at his first EWS

Adam455 (Aug 3, 2016 at 0:24)
Wish Shimano took a leaf out of Srams book in terms of helping people out. At the DH world cup in Lourdes the big Shimano trucks were useless unless your a fully sponsored rider. We had an issue on a team riders brand new saint brakes where they would pump up when the lever was pulled a couple times in quick succession. All we got was a condescending 'you dont know how to bleed it'. They tried to fix it and made the issue worse but refused to warranty the brake. And this wasnt your casual weekend racer, this was a professional factory team with elite riders in the top 15 for men and top 5 for women.

Whats-Next (Aug 3, 2016 at 7:01)
If that happens on new brakes try putting a few drops of mineral oil on the pistons, of course remove the pads. At first when looking at the brakes it won't seem like the piston is sticking with the pads still in but if they ever so slightly stick it will cause the pump up feel.

I suppose if we all put our coins in a community jar though??

mb23 (Aug 3, 2016 at 2:37)
Had my reverb bled by this truck at Finale EWS last year after falling and ripping the hose out. Grumpiest, rudest most belittling mechanic i've ever met, but had to sit back and take it to get my reverb fixed

The UK SRAM tent at all the races on the other hand, amazing service!

jamesurfer (Aug 4, 2016 at 1:17)
I raced at Finale last year as well. You must have caught them on an off day as they were super helpful with me. Only advice I would give, never ever, ever turn up with a dirty bike!! Thats goes for your LBS as well. Thats one easy way to piss them off before they've even looked at your bike :-)

Vander1point0 (Aug 2, 2016 at 15:24)
Am I the only one that noticed the truck in the first picture is a Freightliner and not a Peterbilt.