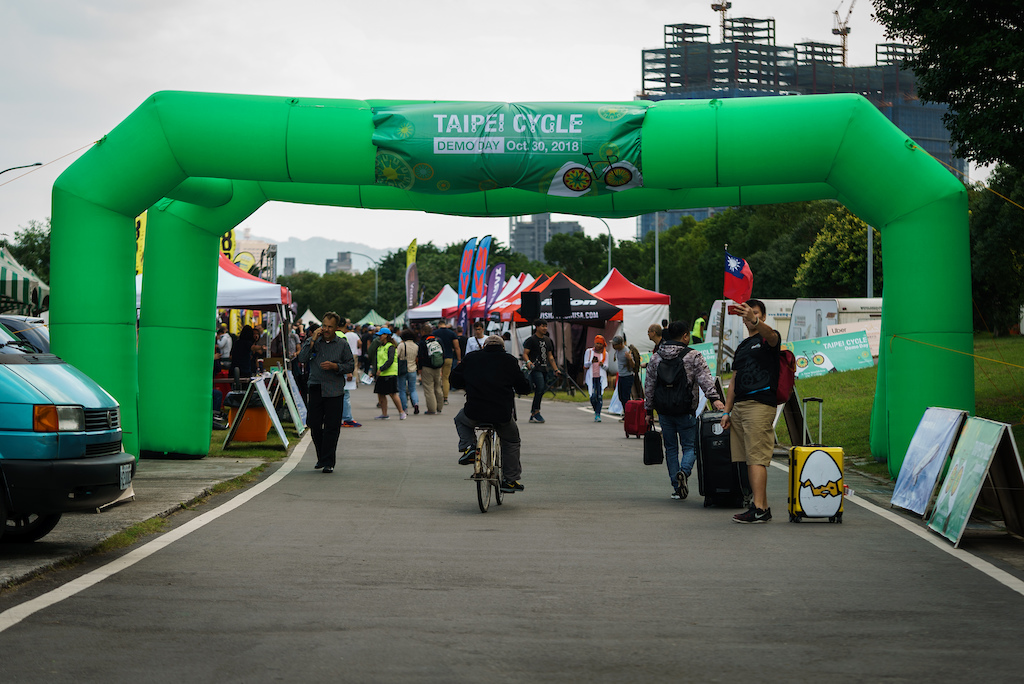 When I was younger, I couldn't wait for the Interbike special issue to show up on the shelves of my local grocery store, which is exactly where I would plant myself while mom went off and picked up the important things that kids don't need to think about. To me, all of the important things were either anodized, made of titanium, or had a load of speed holes drilled in it. That was a very different time, and also a very different time for trade shows. Back then they thrived, and not even more than seven or eight years ago you could pretty much guarantee there'd be something wild, something never before seen, or some reason to run through the halls like an idiot.

The two big shows these days, Interbike and Eurobike, are still around, and although the former is looking more like a wake than a celebration, and the latter is getting quieter, neither will be disappearing anytime soon. What's largely gone are the days of seeing new products, which makes complete sense... I mean, if you had a product to debut, why would you do it at a show where it has to compete with a zillion other plus-sized tires or the fifty different dropper posts that all use the same inexpensive cartridge and cable actuation? Yawn.

But thank the good lord for the Taipei Cycle Show.

The 2018 Taipei Cycle Show kicked off yesterday with their own outdoor demo. Sort of. Held at a campsite of sorts in the heart of Taipei, and apparently having something to do with the 'Camping Association of the Republic of China,' which sure sounds like a hoot, their outdoor demo made Reno's look like a massive event. But what it lacked in size, it more than makes up for in kookiness. And you know who likes kooky stuff? Me. And hopefully you as well. 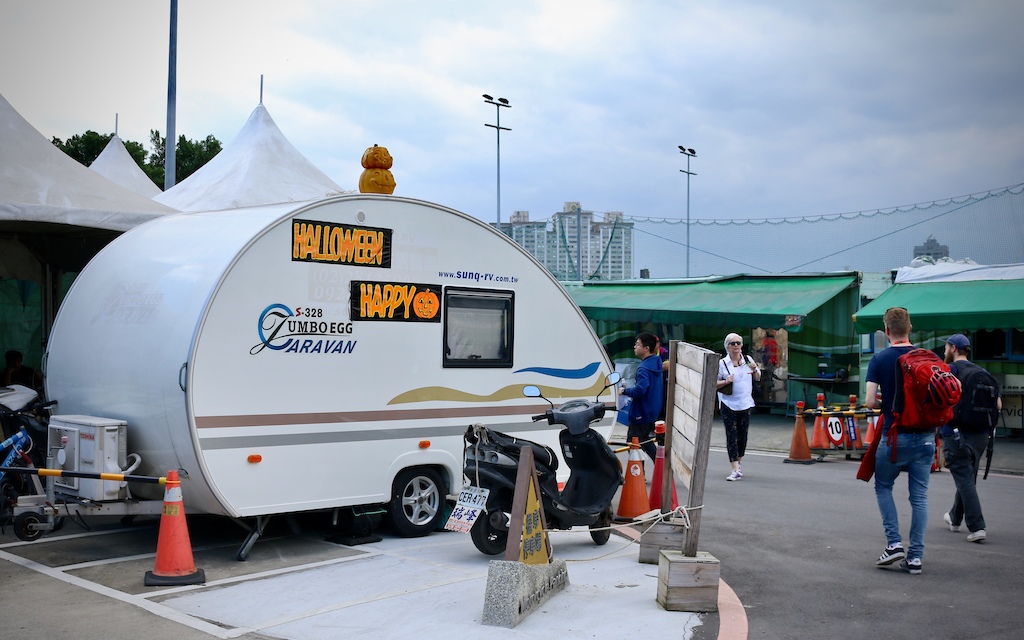 Camping in Taiwan, and especially in the middle of Taipei, a city of 2.6 million people, is a little different than what I picture a camping trip to look like. Probably fewer animals, too, but at least you can Uber to your fave restaurant. 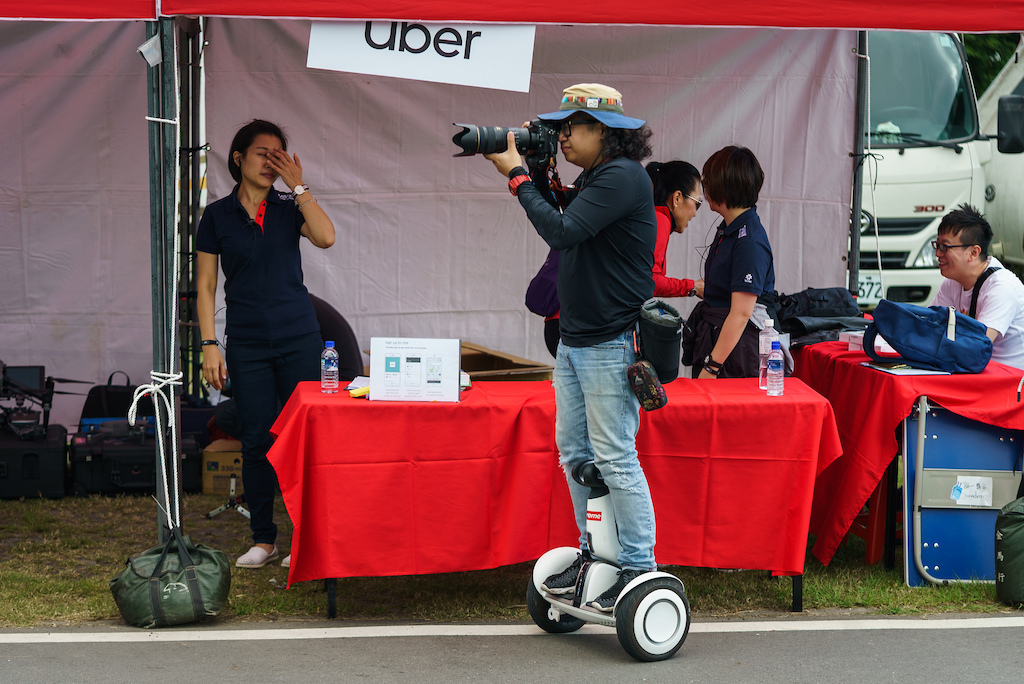 And here I've been using my feet to get around shows like a dumbass, unlike this hypebeast who's obviously got his program dialed. 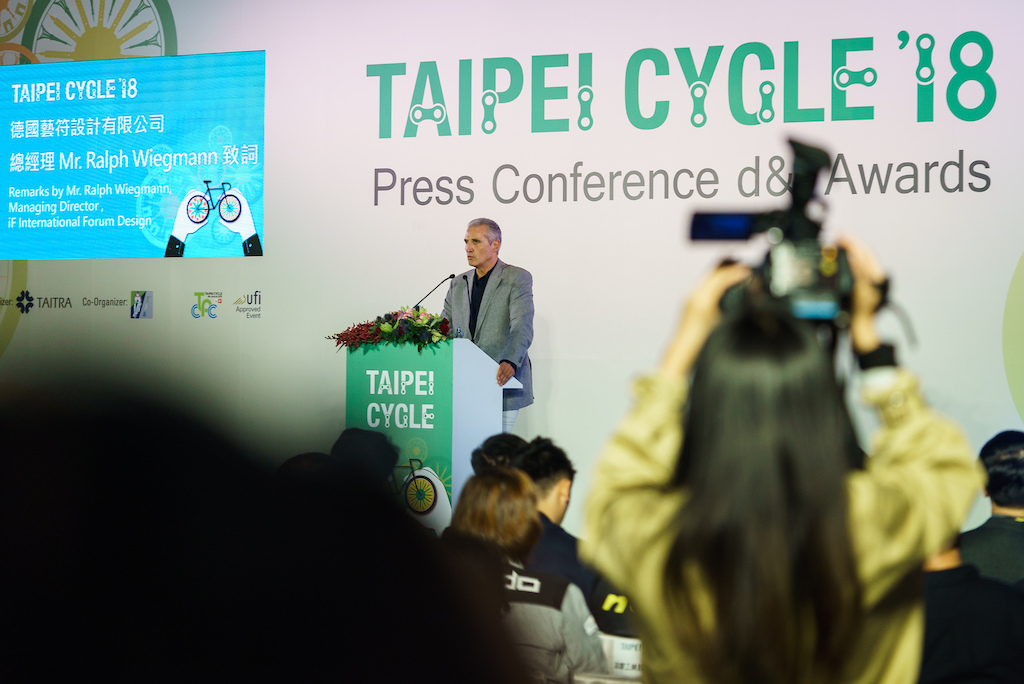 The Taipei show is a big deal. So big, in fact, that Mr. Ralph Wiegmann himself was there for the awards ceremony and press conference. 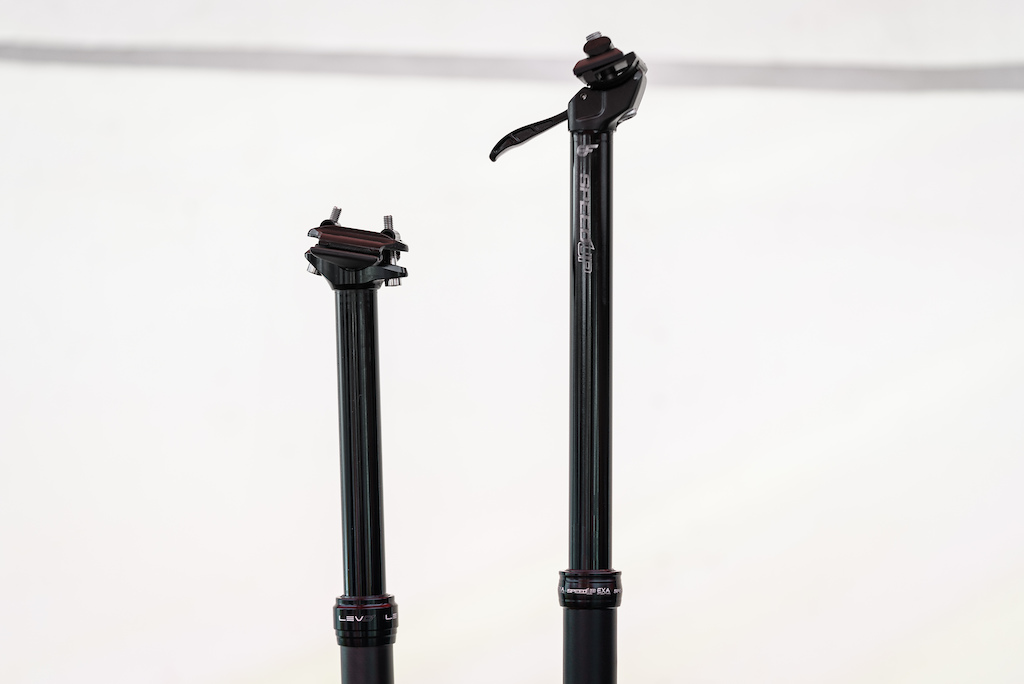 While I could've listened to Ralph's dulcet tones for hours, there actually were a few products to check out as well. KS had this 200mm dropper post in their booth that looks ready for action, but it's intended for folding city bikes that have very short seat tubes. Internally, it's very similar to their standard droppers, but with more material to account for the extra leverage and a beefier and longer outer tube. 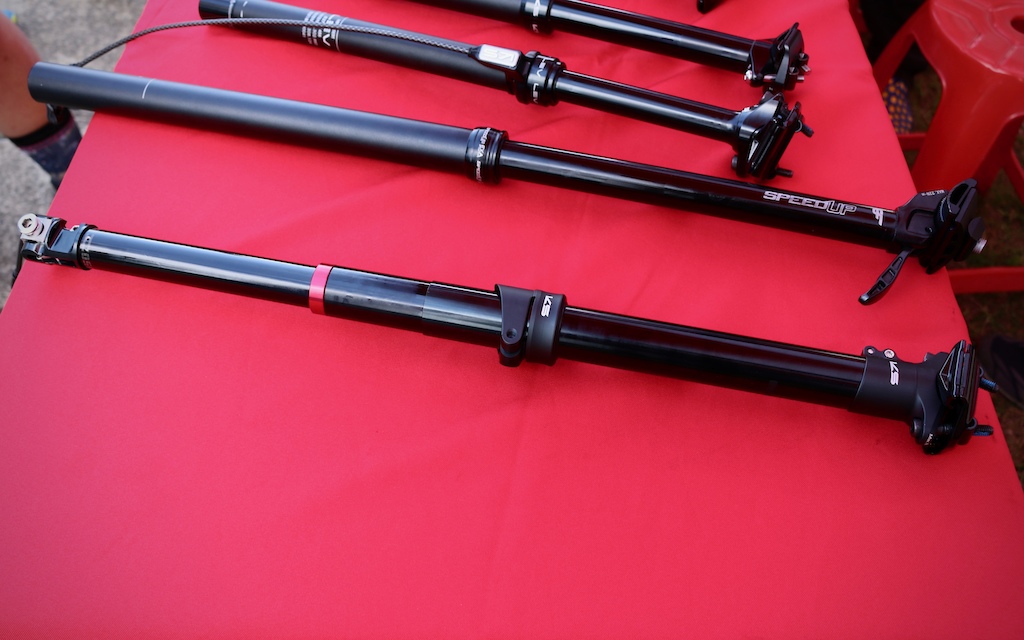 You know the Bold Cycles Linkin Trail and its integrated KS dropper post? Here it is out of the bike. 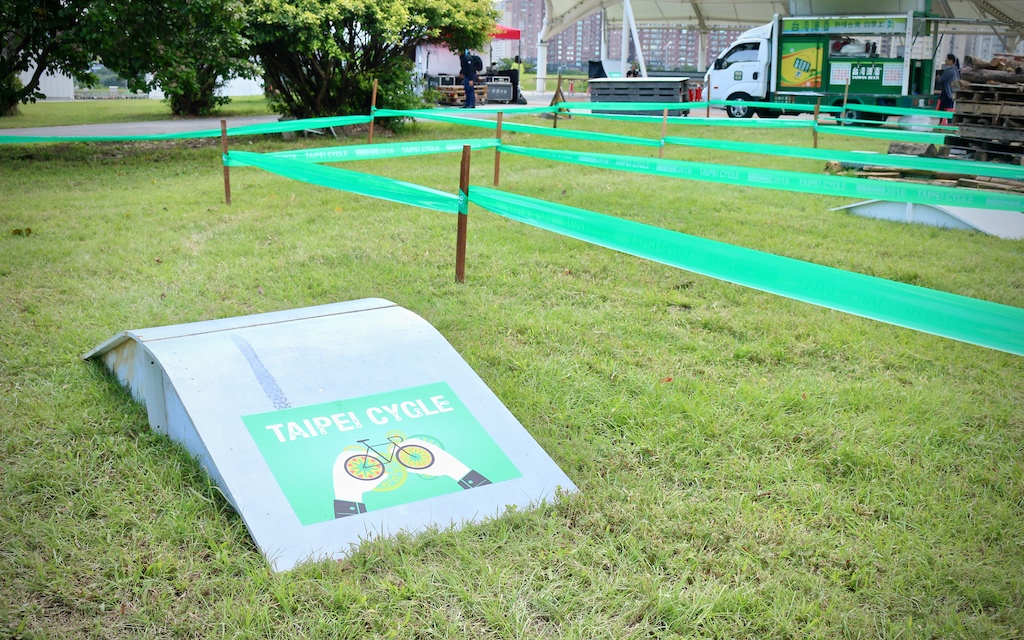 The show's outdoor demo area was, er, grassy. But they did have these slippery little bumps everywhere that made setting a new course record on an electric scooter quite difficult. To be fair, the focus of the outdoor demo was on city bikes, and especially city bikes with motors, so there was no need for real singletrack. 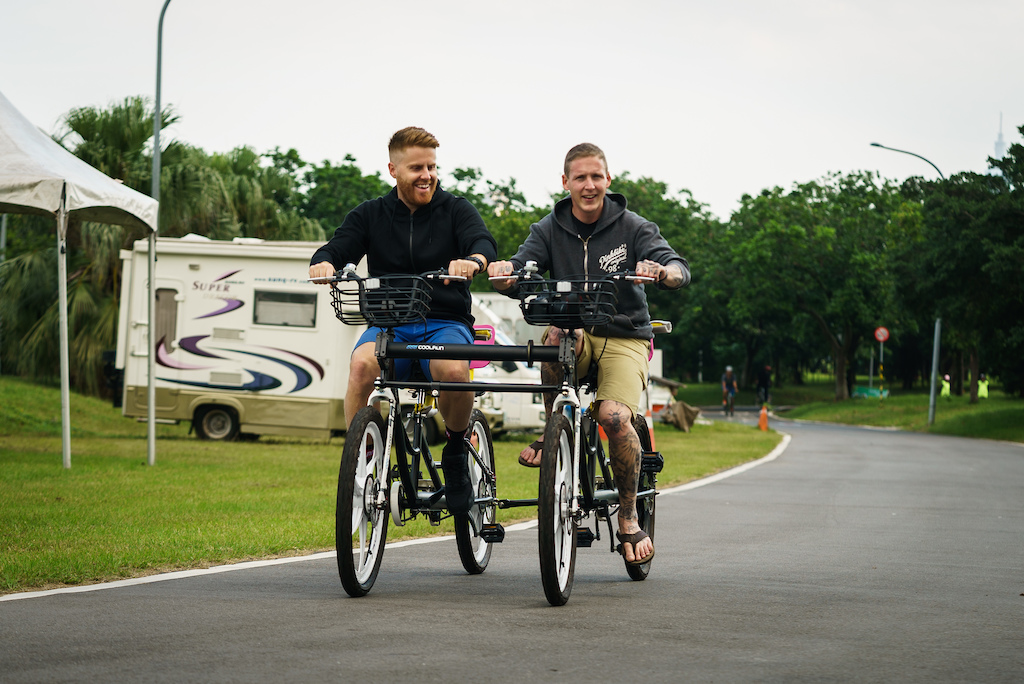 Sure, we might have nearly flipped this four-person bike at the roundabout, and I may have dropped and then ran over my phone, but this contraption did prove that sharing steering duties makes about as much sense as sharing chewing duties at dinner: Fun for a bit, but then it just gets awkward. 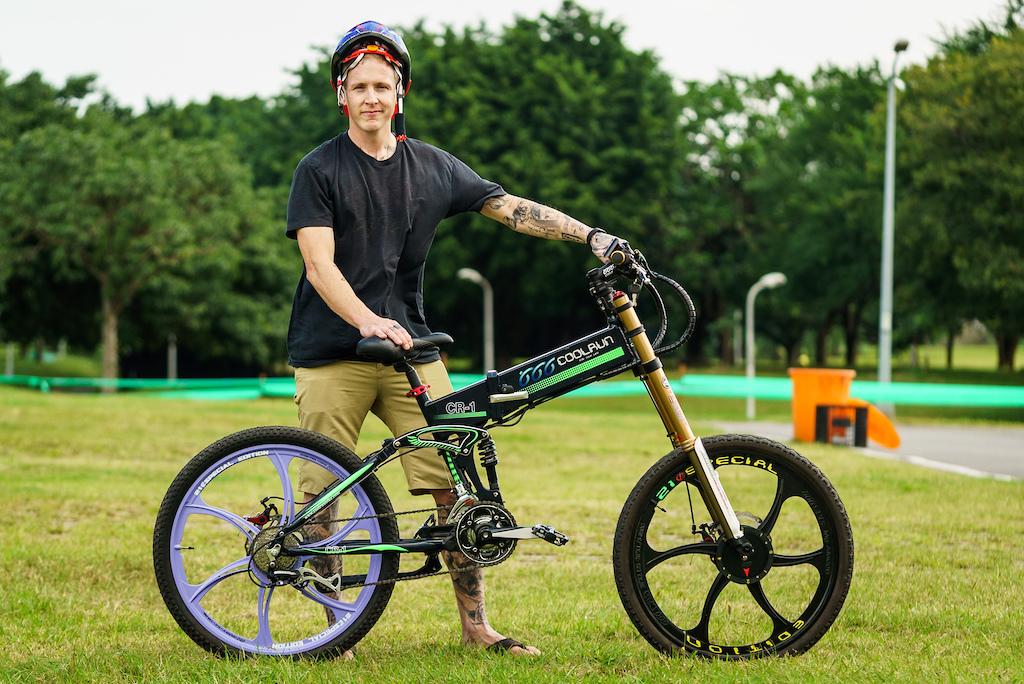 Speaking of awkward, it was super weird when this electric downhill bike (????) had its front brake caliper rattle off while I was trying to ride it up a set of stairs. My bad.
Okay, so there wasn't much to see at the outdoor demo beyond "bikes" with motors and two goofs hooning around on a four-person contraption. It was slim pickings today, but we're heading into the halls of the Nanjing International Exhibition Center tomorrow for the first proper day of the show, so stay tuned for plenty of anodized bits, a bunch of titanium, and plenty of things with speed holes. Maybe.

johannensc (Oct 30, 2018 at 12:23)
"KS had this 200mm dropper post in their booth that looks ready for action, but it's intended for folding city bikes that have very short seat tubes"

These guys really know whats up!! Ive been wanting to huck my Brompton off all the loading docks on my commute, but my 150mm drop seatpost is not confidence inspiring enough to chunder my way through the g-out!!

kopaczus (Oct 30, 2018 at 13:56)
Well you're not taking into consideration that some people might have a usage scenario for that. I see myself running it on my Cannondale Hooligan.

Please tell me you got the flight for free on points?! Because it seems this trip was a massive waste of time and money haha.

showmethemountains (Oct 30, 2018 at 14:21)
Or it's a great way to go on vacation to the eastern Asian islands and use this detour to get at least part of your travel costs covered or written off

rideitall-bmx-dh-road-unicycle (Nov 1, 2018 at 13:53)
@showmethemountains: well duh.... I'm saying why is Pink or whoever sponsored the trip paying for this haha

POWP (Oct 30, 2018 at 22:00)
I was there. TBH, the offroad test track is not really that bad, but I'll call it CX. It does have two or three steep climbs which are suitable for E-MTBs.
==
Among those 2.6 millions of residents in Taipei, I would guess less than 1,000 of them ride offroad. That is also why it is tough for us to get a proper MTB park or route to demo real MTBs.
We make bikes, but only a few people ride them.

TimBigHitFSRII (Oct 30, 2018 at 16:28)
Please give that side by side bike to Jackson Davis and Dave Mcmillan, the world needs to see this

sledMXer (Oct 30, 2018 at 21:15)
So THAT’S where my old Stratos forks went to! CoolRun took over distribution! I also see their cutting edge technology of running just a couple of coils on the shock to save weight! As the wine cooler ad guys used to say - “Brilliant!”

WAKIdesigns (Oct 31, 2018 at 3:40)
@mikelevy: you aren't fooling anybody I can see your calves and cheeks. You lost some pounds. Too much volume. You need to build some meat along the spine, around shoulders and scapulas like Richie. After all it is the bulk up season! What the hell man! We already lost Kazimer to roadie science! His skinny members, his Eagle and no strive for acceleration.

trails801 (Oct 30, 2018 at 12:22)
I'm not sure they used the proper Eagle Drive train installation instructions...Check out that rear mech on that DH rig. Have them bring it by and I'll get it sorted out for them.

optimumnotmaximum (Oct 31, 2018 at 0:34)
i have to convince my dentist friend to buy a bold with daves linkage fork and that ks dropper- full integrated stealthmonster

el-greffe (Oct 31, 2018 at 8:27)
Is there 29er fat tire version of this electric folding DH bike? And I certainly don’t want to open pandora’s Box but will it be boost or non boost?

Outnbout (Oct 31, 2018 at 23:01)
21 special edition rims and cable actuated disc brakes. Might have to sell some more plasma to make sure this is in reach come springtime.

BenPea (Oct 30, 2018 at 16:44)
You should hear what I nearly replied to @IamTheDogEzra
Fortunately PB is far too progressive for that kind of comment.
#respectforallnations