The Pinkbike Podcast: Episode 151 - F1's Valtteri Bottas on How Bikes Make Him a Better Racer & Dealing with Pressure 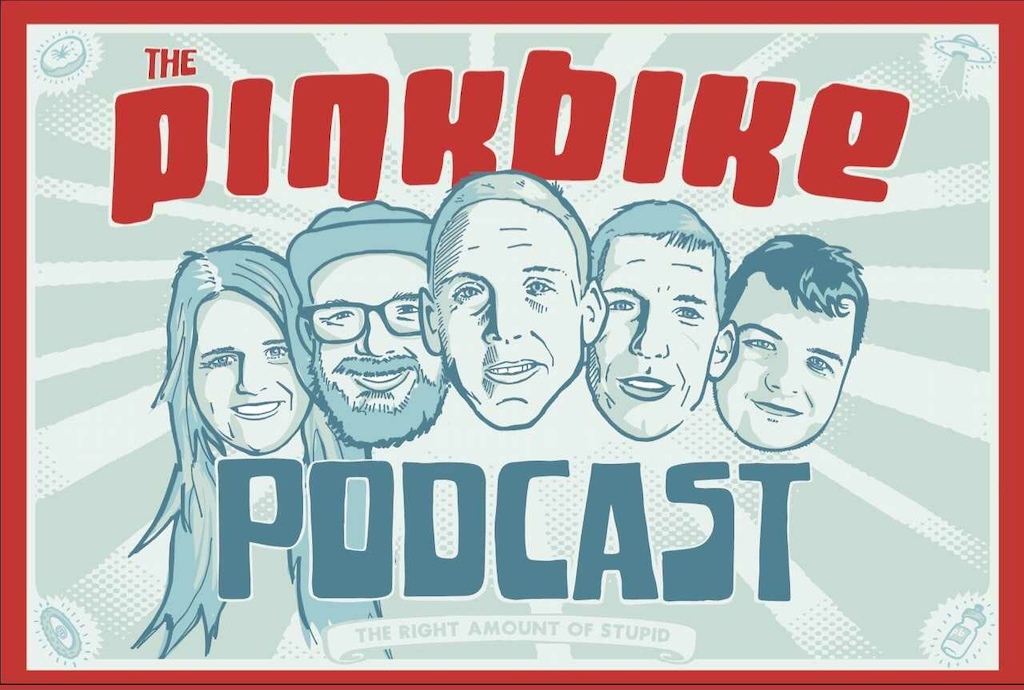 How about something a little off-topic-ish? Alfa Romeo F1 Team Orlen Formula One driver Valtteri Bottas spends many of his weekends inside a 1,000-horsepower race car while chasing tenths of seconds on tracks around the world, but he's also a dedicated cyclist who spends many of his off-days chasing PRs and KOMs on his gravel bike. Tiffany Cromwell races the UCI Women’s World Tour for Canyon / SRAM and has bagged wins at the Giro and Classics, and also represented Australia at the 2020 Olympic Games in Tokyo. Amy Charity is a retired pro racer who co-founded the SBT GRVL event in Steamboat Springs, Colorado, and together with Valtteri and Tiffany, is putting in the FNLD GRVL in Lahti, Finland, next June. If you think you can keep up with Valtteri on two wheels, FNLD GRVL offers three different length rides to choose from, including the 177km 'Midnight Sun' course with nearly 3,000 meters of climbing.

Today's episode sees Valtteri explain why bikes have become so important to him and how they help him be a better F1 driver, why he's always been so good at the pressure cooker that is qualifying, and which of his teammates would make the best - and worst - riding partner. We also get into what he's learned from Tiffany, how the current generation of cars compares to previous formulas, different driving styles, and the race car of his dreams. Tiffany explains the ins and outs of professional road racing, why it's important to keep things fresh, and what she's learned from F1 to be a better bike racer.

Which current or former F1 driver would you like to go for a ride with and why?

THE PINKBIKE PODCAST // EPISODE 151 - F1'S VALTTERI BOTTAS ON HOW BIKES MAKE HIM A BETTER RACER & DEALING WITH PRESSURE
November 10th, 2022

What's more uncomfortable: pulling five Gs in a braking zone or your ass after a five-hour ride?

Featuring a rotating cast of the editorial team and other guests, the Pinkbike podcast is a weekly update on all the latest stories from around the world of mountain biking, as well as some frank discussion about tech, racing, and everything in between.

Subscribe to the podcast via your preferred service (Apple, Spotify, RSS, LibSyn, etc.), or visit the Pinkbike Podcast tag page for the complete list of episodes.

husstler (Nov 10, 2022 at 7:08)
Seriously? You managed to get Valtteri Bottas on the podcast?!? Wow. I hope he was compensated for his time in Quinney Pants (those ridiculous POC things).

Benjamin97 (Nov 10, 2022 at 8:40)
@jmhills: There isnt a single team racing in F1 that isnt competitive....uncompetitive people never even get to the race track.

bikeflog (Nov 10, 2022 at 18:03) (Below Threshold)
@mikelevy: I'm sorry as soon as I heard Valtteri Bottas' disrespectful "intro" I wasn't really interested in what he had to say. Athlete's on their way DOWN should be more humble.

Imagine having your every word and action scrutinized online by loads of people who may or may not be taking things out of context?! That'd be no fun.

On the way down? What F1 season have you been watching?

bikeflog (Nov 10, 2022 at 18:14) (Below Threshold)
@mikelevy: OK, I hear you, I don't follow F1 but do top tier drivers drive for 2nd tier teams (other than for lucrative contracts). It was an assumption on my part. Keep up the good work.

mybaben (Nov 10, 2022 at 20:37)
@Narro2: He's done a good job overall! They should do pretty well next season. But I'm really looking forward to seeing what's going to happen with Fernando at AM!!

Narro2 (Nov 11, 2022 at 8:02)
@mybaben: yeah, i am looking foward to that too, hopefully they finally unlock that car, talking about Aston Martin, have you seen Lance's face expressions recently, it seems like he is no longer having fun, wonder if he is disappointed overall, you know, not being a top driver, accepting reality.

mybaben (Nov 11, 2022 at 19:05)
@Narro2: LOL. Yeah, I'm just not a fan. He seems like such a spoiled rich boy. I hope McLaren can fix their car too! The 2021 was so much better and better looking. They changed the tint of the mango this season and I didn't like it. Lando is so great and if he had a car he would kill it. I'm spacing out on who he's racing with next season...crap.

DizzyNinja (Nov 10, 2022 at 7:17)
There seems to be a direct correlation to the decrease of his performance and the increase of headset routing

arghana (Nov 10, 2022 at 8:54)
Total Fanboy interview both Tiffany Cromwell and Valteri Bottas are favourites. 325-350 FTP for a guy like Bottas is amazing. He doesn't look like a big guy, so that's amazing. I was glued to this interview.

PawnSacrifice (Nov 13, 2022 at 2:59)
Sounds mad, I had a similar reaction. I think because of what they do, obstensibly a lot of sitting down, the fitness of a modern F1 driver goes under the radar. Also, credit to Levy for getting so much out of Bottas, not a known talker.

stringaling (Nov 10, 2022 at 8:30)
Did he already know what Pinkbike was about ? Is it difficult to get someone outside of the industry on the podcast for a website that looks like... well what it is.. Is the pitch - Pinkbike - it's kind of big if your into mountain biking - just don't look at the website.

powderhoundbrr (Nov 10, 2022 at 9:05)
I imagine that being on the Pinkbike Podcast has allowed Valtteri to finally check off the last must do on his life goals list. He can now retire next year fully fulfilled.

mikelevy Mod (Nov 10, 2022 at 9:27)
He did mention that being on the Pinkpod was just under winning an F1 championship on his to-do list.

TaytonR (Nov 10, 2022 at 9:42)
@mikelevy: I believe it was above the Championship. Only one F1 driver has ever been on the Podcast. Lots of drivers have won the championship.

pockets-the-coyote (Nov 10, 2022 at 7:53)
So glad that Mike Iforgothissurname has done so well on this series and continues to keep things creative! Good work Levy

Pretty apparent what a serious competitor he is from general discussion. I.e. "Do you use a power meter?" He seemed nearly insulted! Reading between the lines, to be competitive at that level you need to pay attention to every detail.

Also--reading the comments, two things become apparent: First, bikers that don't follow F1 don't really get it. Bottas as washed up? WTF. Second, before you think Bottas is a nut you need to visit Finland/meet some Finns to understand their humor.

mikelevy Mod (Nov 10, 2022 at 9:26)
Not gonna lie, pretty neat to have an actual F1 driver on Pinkbike. I've been obsessed with F1 for decades. I don't get that fussed about anyone, but it's been such a crazy ride... from what we were doing 12 or 13 years ago to now having Valtteri come on to chat about bikes

alexridesbikes-13 (Nov 10, 2022 at 11:50)
I already loved the Pinkpod, but this is next level! Never thought I'd see this, props guys and really awesome to hear Valtteri talk about bikes!

maddcow (Nov 13, 2022 at 9:30)
I love how Mike was trying to pretend this episode is about bikes for the first 15 minutes and then gave up. Good job, I bet talking with one of the top F1 drivers was high on your bucket list!

Interesting insight about his mental approach to quali vs the race, kinda like XC/Enduro vs DH I guess.

dsimmons12 (Nov 14, 2022 at 11:47)
I was hoping this podcast would happen!!! I saw Tiffany and Valtteri recently at the BWR Kansas race. Didn't approach them, but seemed like super nice people out there having fun on bikes! Great podcast @mikelevy, keep it up man.

Narro2 (Nov 10, 2022 at 8:54)
i follow these guys on Strava, the bikes they been riding this last week have been terrible, they must've been rental walmart bikes, why couldnt Canyon ship some bikes to South America?

iduckett (Nov 14, 2022 at 3:23)
I was also wondering if Valtteri ever tried Mountain Biking. I know Mark Webber was into it (or was at one point)... @mikelevy - here's another podcast idea!

605endurbro (Nov 10, 2022 at 16:50)
Is anyone gonna talk about Outside making all Trailforks early adopters get an outside+ membership? Way to pad the numbers and fill up the junk mailbox

flaflow (Nov 11, 2022 at 7:32)
The US is full of people following international sports. Not just MotoGP, Rally and F1, tennis, futbol too. F1's recent efforts to grow the US fanbase aside, it's not new. I understand you're from a small place, but maybe redouble your efforts to open your mind pal.

iduckett (Nov 11, 2022 at 8:36)
Starting watching F1 in 2006 - lets recall some moments since then. Massa's fuel hose fire in Singapore, Hamilton outrunning Timo in Brazil to the line, Vettels stunning wet race win in a Toro Rosso, Multi-21, Webber going to the moon in Valencia, Alonso Leava da space, Felipe - Fernando is faster than you, Jenson's wet race last minute pass FTW on Seb in Canada, Grosjean "first lap nutcase" shoving Alonso into Hamilton and almost beheading him, preempting moves towards HALO, Shumacher's Mercedes pole lap in Monaco (then penalized), Maldonado's first and only win, Grosjean chasing Seb for 2nd at Nurburgring, Kimi's classic leave me alone I know what I'm doing, Bruno Senna in a lotus and williams, Karun Chandok in HRT, Danny and Verstappen duking it out at redbull, Seb spinning the ferrari FTL, "Kyvat the Torpedo". I could go all day but need to go back to work.

Narro2 (Nov 11, 2022 at 8:45)
@mikaeljc you got any problem with that?? just started watching the sport last year pal, my wife and I were bored on a weekend we put the "surprise me" option on Netflix and it was Drive to Survive, we liked Daniels attitude, loved Lewis' personality and got hooked on F1 since then.

ps: My daughters cheer for Fernando and Esteban just because their cars are pink.

whiteryanc (Nov 10, 2022 at 13:50)
Oh man, this is 100% mothership (Outside) intervention invading an otherwise great podcast feed. Love you guys, but have to call out how ridiculous this is. Didn't think Outside owned SBT...but the Outside.io site is certainly getting money for advertising/sponsored content. www.outside.io