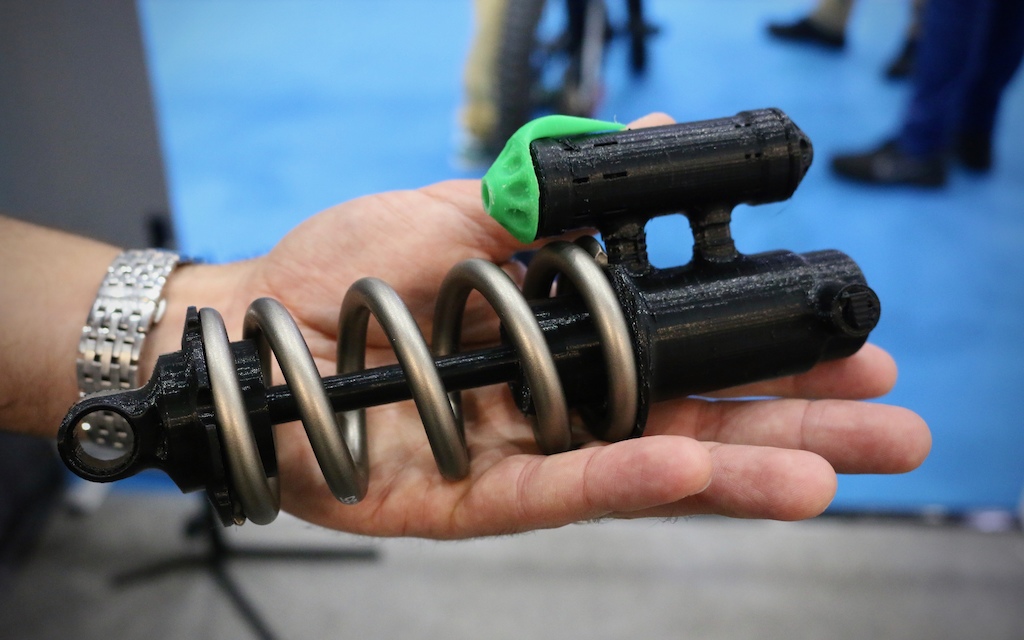 Motion Engineering says that their shock's main piston ''disconnects'' above a certain frequency.

Matthieu Alfano, the engineer behind Motion Engineering, doesn't do things like everyone else, with their 170mm-travel linkage fork employing a single carbon leaf spring, carbon legs, and a thru-shaft damper of their own design that doesn't need an IFP or bladder to do its job. The result is fork that might scare people off with its looks, but Alfano also claims that it's the only one on the market with true anti-dive abilities due to where he's placed the pivot points. Physics and stuff.

Motion has been working on something a bit more traditional looking, though, at least on the outside. The Flow EVO shock's internals are in the process of being patented and Alfano didn't want to go too deep with an explanation quite yet, and all they had in their booth was a rough-looking 3D-printed model, but it sounds like there are some neat things happening inside of it.

First, let's take a look at what we do know. Both bottom-out and top-out will be controlled hydraulically rather than by bumpers or springs, with position-sensitive valves at each end of the stroke that use oil displacement to slow down the action. 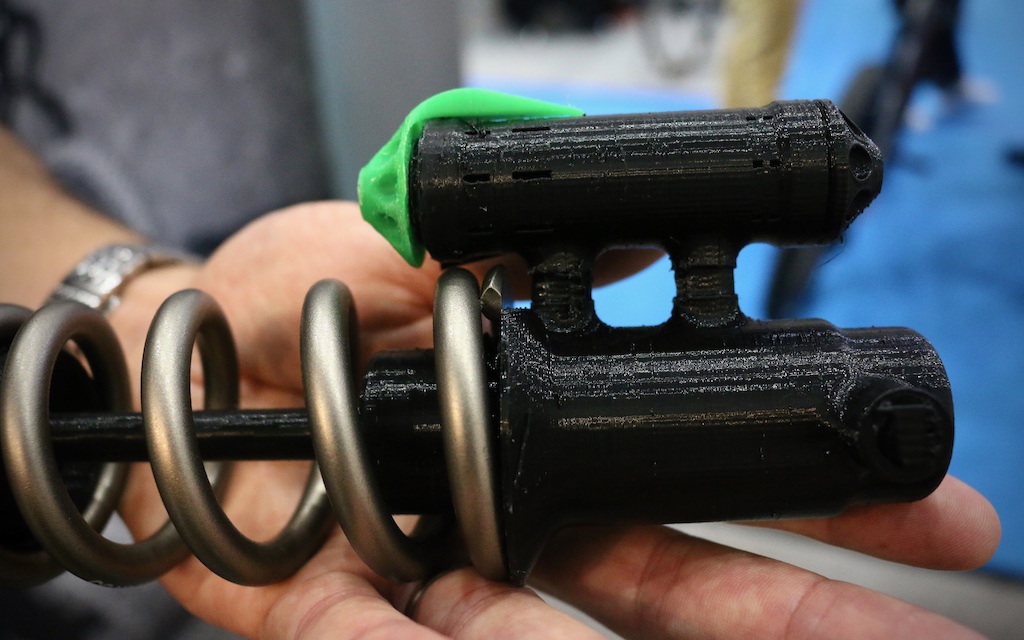 The 3D-printing is rough, but Motion do have functioning prototypes.
Alfano didn't have one apart to show, but it's something that's been put to use in the motorbike world and some mountain bike stuff as well (Manitou's HBO system, as well as Fox's older dampers), and it makes for bottom-out control that's independent of other settings.

Things get a little murkier when we get to something that Motion Engineering refers to as the High-Frequency Filtering piston. ''Oil has a mass and therefore opposes a resistance under motion,'' Alfano explains in their tech sheet, and the higher the shaft speeds, the more this can affect the suspension action. But get this: ''Above a certain frequency, the piston is disconnected and doesn't transmit any more oil movement,'' with Motion saying that this keeps high-frequencies from being transmitted to the bike and rider. Basically, the claim is that this allows them to separate impact forces that require damping from much smaller, high-frequency hits where you might want your suspension to be as open and free feeling as possible.

The advantage, I'm told, are considerable gains in comfort and traction. 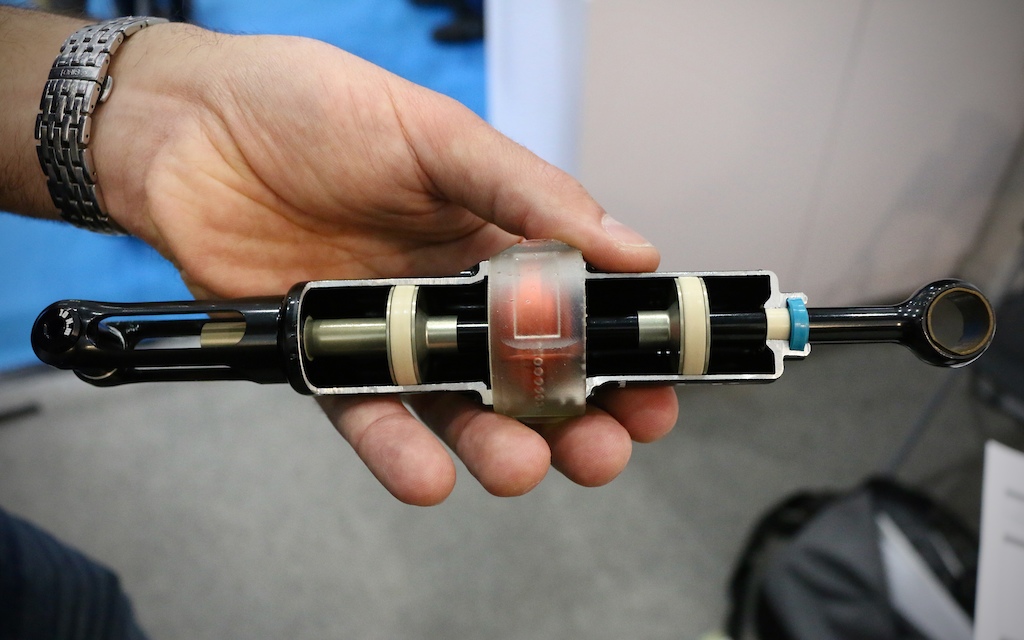 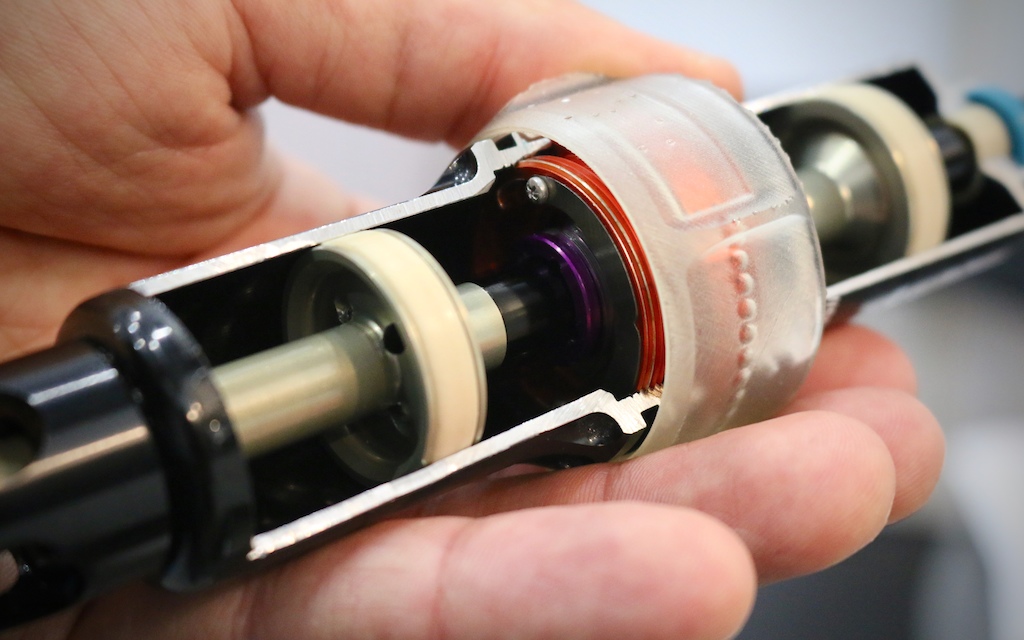 What does it look like? No idea, but Alfano did let slip that there are no shims on the main piston like you'd usually see, with the damping circuits being located in the piggyback like a twin-tube system. And check how the piggyback is connected to the body in two places; oil flows through one passage during compression, and then out through the other during rebound.

Adjustments will include three-position compression and the usual low-speed rebound dial. The shock with be available by this coming summer and Motion will be offering it in all the usual sizes and trunnion mounting as well.

WAKIdesigns (Mar 29, 2019 at 1:44)
"Motion Engineering says that their shock's main piston ''disconnects'' above a certain frequency" - is this a recall announcement? I am confused

TheDoctoRR (Mar 29, 2019 at 10:38)
It’s actually a novel new way to manufacture and market bike parts. Instead of spending $5 on a shock that stops working when you need it most, you can now spend hundreds! It’s not unlike a lot of current bike parts that crap out on you, however, in this case they are up front about it!

cueTIP (Mar 29, 2019 at 6:32)
@faul: For a visual proof of concept rather than a functional part I don't know why they used a FDM printer anyways. A SLA would have been a much better option IMO, not as strong but much better looking.

fluider (Mar 29, 2019 at 13:43)
Motion Ride is actually starting up Pre-Orders campaign for this shock since April 15th !!! Which means, it's production ready, and we can await some magazie reviews in the near future.

cmacca (Mar 29, 2019 at 12:44)
Sounds like they've essentially created a physical low-pass filter in a shock? You could theoretically feel much less trail chatter at high speeds. Pretty interesting stuff and if it works as he says it does then it has potential to be a big deal.

ak-77 (Mar 30, 2019 at 12:49)
I guess you could make a low pass filter by putting a spring in series with the shock. Like by making the shaft compressible. You'd end up with a short length of undamped travel that filters out the buzz. Kind of like what tires do, they are also springs in series with the suspension. Hard to tell how that works out in practice. I guess by carefully tuning the stroke and some light damping you could get very good small bump compliance.

mikelevy Mod Plus (Mar 29, 2019 at 1:23)
@mtbikeaddict: These puns never dampen my enthusiasm for the PB comment section. Keep 'em coming.

WAKIdesigns (Mar 29, 2019 at 5:22)
@ridintrials: He just made sure the whole enterprise won't be double shafted by some amateur

yeti-monster (Mar 30, 2019 at 1:10)
Completely the opposite. Brain locked out until you hit something, then it would open fully about 1 second after you needed it to.

bananowy (Apr 3, 2019 at 3:46)
@themountain: No, the guy above literally explained the difference to you. The goals are opposite. Brain locks out most times and should open up when needed. This new shock will be fully open and fast rebounding (zero damping, just spring) on small chatter and then firm up (engage damping) when it hits larger stuff. The exact opposite of the Brain.