Whether you have ridden Perry Park Birmingham, the Manchester indoor cycling centre SX track or watched the London 2012 Olympics BMX, judging by the design and flow there’s little doubt that the architects of these epic constructions know how to shape dirt!

C&K Contractors are renowned for building world-class tracks. Clark, Kent and Woodrow Bridgett have grown up riding bikes and shaping dirt, refining their skills into evermore elaborate and sophisticated courses. But it was in their folk’s back garden that they got a taste for digging.

I’d seen a few snaps and heard many tales about where these guys honed their craft - namely the Bridgett’s backyard, so I was stoked to get an invitation to Jane and Peter’s home to check out the infamous C&K Compound! 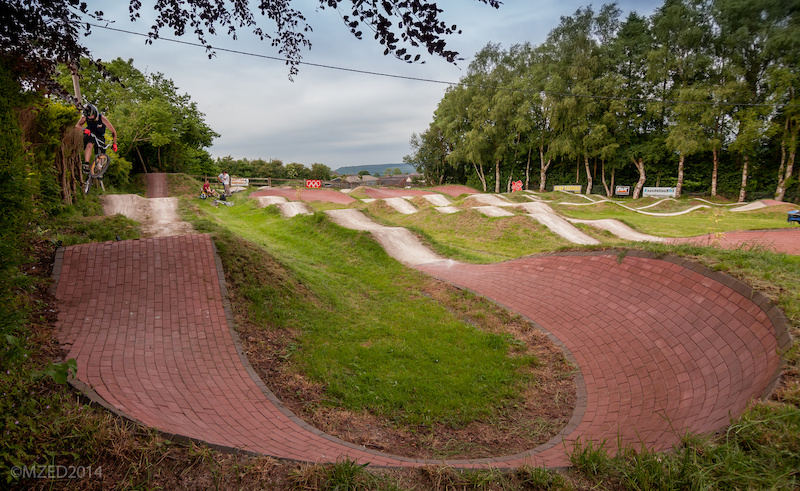 Driving down an idyllic country lane I was greeted by Woodrow in front of the family’s neat Californian style bungalow. As Woodrow led me around the back I was confronted by what can only be described as the dream backyard, the sheer scale of the construction immediately struck me as well as those notorious, immaculately paved berms! Without a doubt the most intriguing feature. I remember thinking “Woodrow’s folks must be super cool” and I certainly wasn’t mistaken.

The highlight of the afternoon was spending time with Jane and Peter; this is a couple you want at your party! Charismatic, sharp, funny and no bullshit, both were super hospitable and incredibly generous with their time and knowledge. Unfortunately Clark was only around briefly but it was great to meet him and hear about the various incarnations of the yard, it’s been everything from a football pitch to massive sets of doubles and every variation possible in-between.

As riders started filtering into the yard I knew I was in for a treat, it didn’t take long before things got interesting! Joey Gough’s speed and style never fails to impress and witnessing Antony Tuffs’ tripling rollers that simply looked impossible was an eye opener! Some mega fast and close trains were going down and riders were boosting crazy air from features that simply shouldn’t throw you that high!

It was a shame that I only had an afternoon behind the lens, as there is enough interest and characters at C&K’s to make a feature film. It was a privilege to have spent an afternoon with such rad people at such an awesome location; I hope you enjoy the edit as much as I enjoyed my time at the Compound.

There's one berm in particular that's getting washed out over winter and is too awkward to cover with a tarp, and so long as the berm has already had a chance to bed in properly you'd think bricks should hold their shape pretty well. Love it!

hampsteadbandit (Jul 14, 2014 at 1:24)
I've spent years building skateparks and bike parks and C&K have got their sh*t totally dialled - mad props to their crew

hellhound089 (Jul 14, 2014 at 4:36)
Of course I'm no dirt jumper but doesn't dirt hold your traction in the corners, a smoth brick is more likely to be slippery I guess once you've riden them for a while you don't notice any more

its a fair point

generally house brick has an abrasive surface which will provide a good level of traction for any modern tire compound, if you rub your hand against a brick wall you will get a nasty graze for sure

it would only be glazed bricks or tiling that would be lethally slippy!

perkyp (Jul 14, 2014 at 8:48)
They are paving bricks not house bricks, alot smoother but still have plenty of grip. Would be more like carpet burns if you bail onto them

Pavers are pretty coarse, so grip should be fine, plus since they're thinner, they'd be cheaper than house bricks if you had to buy them. No-one has crashed on the berms (yet ;-) ), so not too fussed about that, and I thought it was more the angle of the berm that holds your line?

Probably a good idea to use a bed of paving sand to set them in place, keep the gaps as small as possible and then finish off with paveset or pavelock which sets like a gel after you sweep it into the gaps and then wet it. Like I said before, I'd only do it after a berm has had a chance to settle in, has had plenty of riders on it, and has gone through a few rain cycles.

I really like the attention to detail these guys have gone to, the outer layer of pavers is a different colour and not cut, instead they've cut the second last layer to fill in. Looks very clean, proper craftsmen!

dv8416 (Jul 14, 2014 at 4:22)
My only criteria for buying a house is backyard large enough for a pump track and a deck for myself and my buddies - after seeing this I think i will just buy a farm

aljoburr (Jul 14, 2014 at 5:16)
Great too see good tracks getting build, Just how it should be If I was going to build my own house, It would have transition for walls