$720 GBP
For sale my girlfriends mountain bike. It’s a large transition bandit 26”. We bought the bike about 5 years ago and to be fair she’s hardly rode it. It had all the frame bearings changed 2-3 rides ago. I’d say the bike would suit anyone under 6ft its a large but not very big at all so probs like most mediums. I’m unsure of the year but I think it could be 2011/12 Spec: X fusion vengeance forks Fox RP23 shock Hope pro 2 hubs on mavic rims Xtr cranks Avid xo brakes, xo shitfter 10spd Reverb seatpost Superstar bars Ragley stem. Would make a good bike for someone, very lively poppy bike that’s a total ripper on trail centres. Good condition, only blemish is a dent in the downtube but this doesn’t affect the performance in any way. Get in touch if you are interested. Based in the north east but I’m often in Cumbria visiting family. Thanks Barry 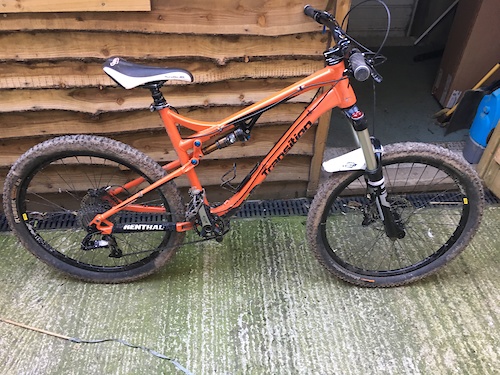 $30 GBP
Came off a nomad v4, hardly used so in excellent condition. 150mm in length. I also have the 500lbs spring so get in touch if you want both.

$30 GBP
Came off a nomad v4 500lbs spring hardly used and in excellent condition. I also have a 450lbs spring so get in touch if you want both. Both springs are 150mm in length