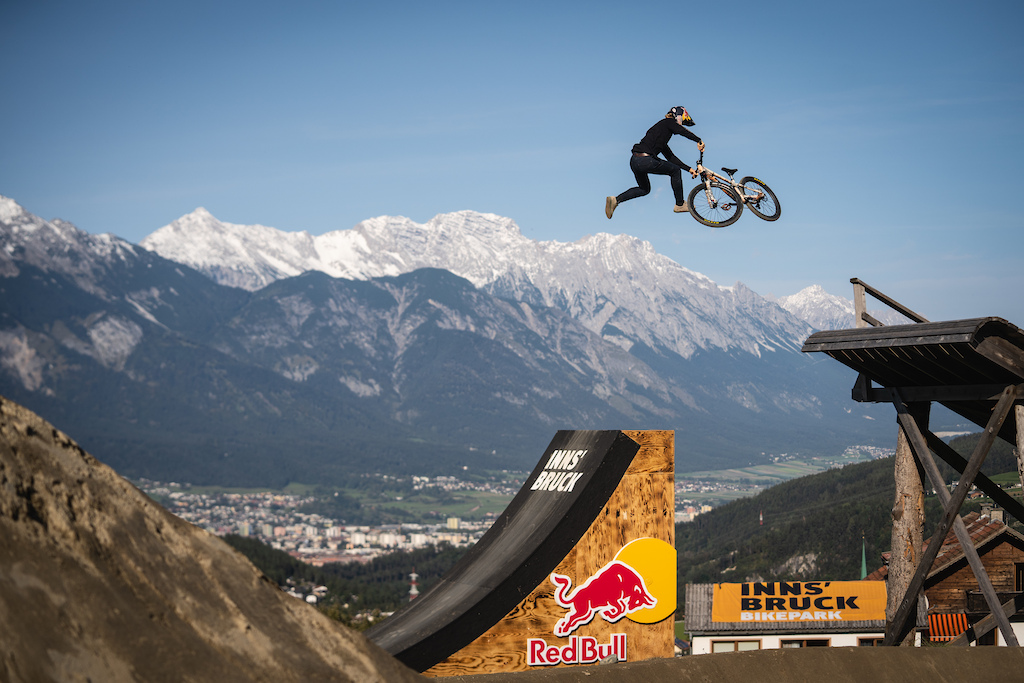 Johansson, the reigning King of Innsbruck Slopestyle. Photo: Kike Abelleira
It's been a long time coming. The first Crankworx FMBA Slopestyle World Championship contest since March 2020 is set to launch in one month.

June 16-20, Crankworx Innsbruck will bring the action to the world live on Red Bull TV. Saturday, June 19, all eyes will be on Slopestyle.

For riders, that means chill backyard sessions are starting to get next-level. New tricks are getting dialed while new setups are being put to the test. Custom paint jobs are being unveiled. Travel plans are getting locked in.

Backyard sessions, and Instagram feeds, are going off.
For fans of freeride, the countdown is on...

Today, the list of invited riders who’ll be competing in the Crankworx Innsbruck Slopestyle was released.

Ready to drop in from the top of the start ramp will be:

Alternates on deck will be Timothé Bringer (FRA) and Tom Isted (GBR). 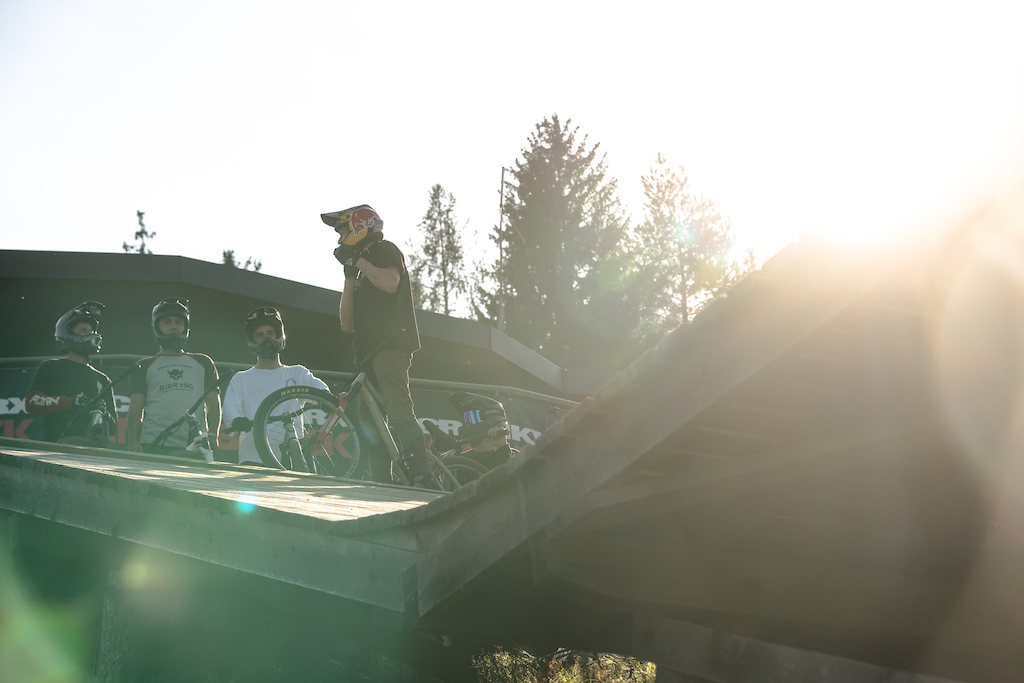 Putting the band back together... Photo: Kike Abelleira
One to watch will be the Swedish phenom who’s won the last three Crankworx Slopestyle contests. And while Emil Johansson has now won every Crankworx Slopestyle contest there is to win, the full roster of competitors was not in Innsbruck to challenge him in 2020, most notably two-time event winner Nicholi Rogatkin. Due to the travel restrictions in place at the time the event was sanctioned as a gold-level event, instead of the usual diamond-level associated with SWC events.

A win in Innsbruck this year would bring the Red Bull rider the full pull of diamond-level Crankworx Slopestyle wins.


Brandon Semenuk once said the young Swede was on track to be “unstoppable.”

The course that awaits riders is one with four years of history behind it. Johansson is its most recent conqueror, preceded by Brett Rheeder (2019) and Rogatkin (2018 and 2017).

With Rogatkin and his countrymen back in the mix, this year’s contest will feature the deepest field of American riders to hit the Crankworx Slopestyle scene in recent memory. This includes the SWC debut of Garret Mechem. Mechem earns his spot on the invited rider list as the 2020 Red Bull Rookie of the Year.


Mechem has competed and podiumed in other disciplines at Crankworx, but never Slopestyle. 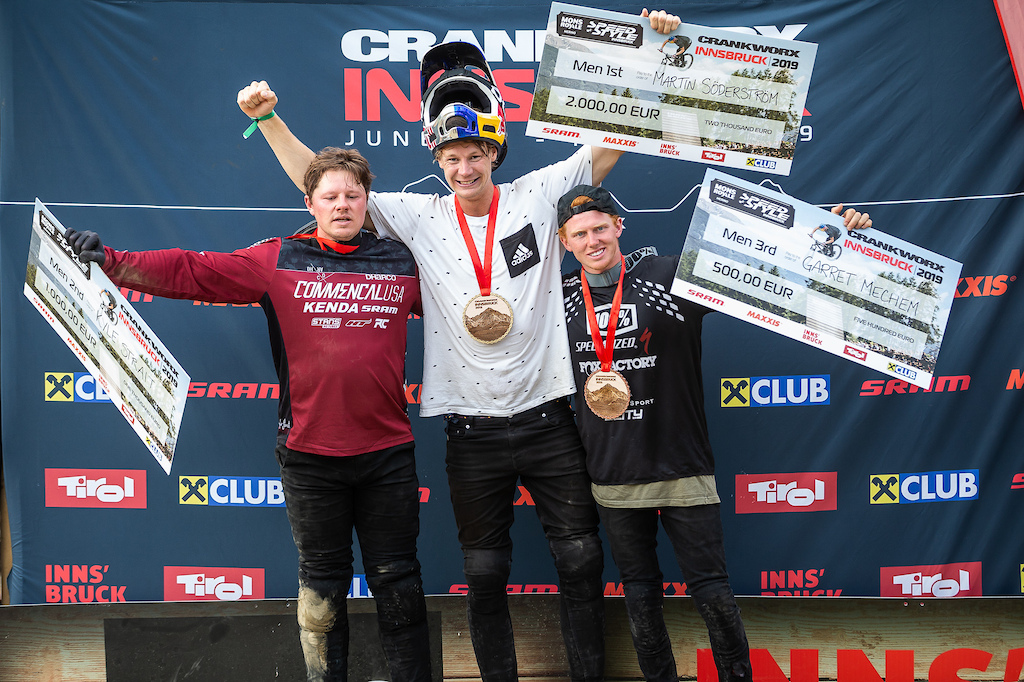 Mechem (right) has a long list of Crankworx competitions under his belt, include podiums in Speed & Style, but this will be his first time competing at this level of Slopestyle. Photo: Fraser Britton
All the action from the Crankworx Innsbruck Slopestyle will be live on Red Bull TV. In total, five events will be broadcast live over the four days of the festival.

A list of invited riders set to take on the Official European Whip-Off Championships presented by POC will also be released, with highlights of the event available after the champs have been crowned.

Full schedule and details for all live events to come during Crankworx Innsbruck 2021: crankworx.com

jabblede (May 19, 2021 at 11:34)
Man if I was a @TransitionBikeCompany @YTIndustries @evocsports or one of the other fest founders sponsors I would be SO PISSED to find out that they were comming to such a horrible event that goes against the dedication to the art of riding bikes and building trails - things that are far more important than how many views or likes a video gets on social media. Man they are super lucky for the opportunity to put thier brands behind riders that don't stoop so low as to have an active media presence.

McArdle (May 20, 2021 at 13:25)
@officialcrankworx: Awesome can’t wait to not win this too, like all of the other Pinkbike comps I’ve entered

dualcrownscottspark (May 19, 2021 at 7:20)
@scott-townes: 17 riders doesn't seem like much, how are we supposed to get better riders when the field is so small?

scott-townes (May 19, 2021 at 7:27)
@dualcrownscottspark: You're welcome to look into how the FMB tour functions which has been around for years now.

PrincessBigWhip (May 19, 2021 at 7:28)
@dualcrownscottspark: It's more riders than usual for a slopestyle contest of this caliber. There's usually like 14 or 15.

plyawn (May 19, 2021 at 10:39)
@dualcrownscottspark: Pretty well defined formula of winning in the bronze => silver => gold events to gain points to qualify for a diamond event like this one. There's definitely a reason we see the same elite group at the top events, but everyone else can climb the ranks too.

dualcrownscottspark (May 19, 2021 at 16:16)
@mitch1616: can say I have never heard of a slopestyle event near me expect from at highland which is quite the drive.

adrennan (May 19, 2021 at 7:14)
@Joebohobo: following the semenuk formula for freeride success

manhattanprjkt83 (May 19, 2021 at 7:32)
@adrennan: he prob took up rally, his transformation into semenuk is almost complete.

hisroyalgooseness (May 19, 2021 at 8:14)
@manhattanprjkt83: I once called him Logan when he signed a cap for me a Crankworx, it was a weird time when I couldn't tell Rheeder from Peat or Norbratten from Strait. Anyway, he signed it and smiled. Nice fella, I wish him every success.

officialcrankworx (May 19, 2021 at 9:12)
Again with the fat fingers. But hey, Mad Max Fredriksson is a pretty sweet nickname.

rosemarywheel (May 19, 2021 at 20:05)
"And while Emil Johansson has now won every Crankworx Slopestyle contest there is to win, the full roster of competitors was not in Innsbruck to challenge him in 2020, most notably two-time event winner Nicholi Rogatkin"

Please, @officialCrankwork. We are all fans, we know the peeps riding, and we which are at the top/most popular. No need for this sensless drama. That ^ is pure fluff.

mudandgearspdx (May 19, 2021 at 13:13)
I think Garret Mechem is the only name I don't recognize! Even without Brett and Brandon it looks like a really strong field.

onemanarmy (May 19, 2021 at 22:35)
Learn it. The kids an animal. He's proven to be very competitive in other events already. Were it not for an ill advised double tail whip a couple years ago people would have been hearing about him even sooner.

Emilmtbhans (May 20, 2021 at 0:54)
Can`t wait to see what new bonkers trick Johansson has learned over the winter months

Farmernobike (May 19, 2021 at 11:54)
What's with the short rider list...? looks pretty lame if you ask me not really a proper competition when you don't invite all the top level athletes.

adrennan (May 19, 2021 at 7:15)
zink hasnt competed in slopestyle for years now. the tricks have gotten so spinny compared to his era

giantwhip (May 19, 2021 at 7:19)
Probably the fact they have to isolate before competing is a major drawback for the cost of going there and the winnings. It's non essential travel anyways

Joebohobo (May 19, 2021 at 7:23)
Semenuk only does Joyride & Rampage, Zink hasn't done slope comps for years, and apparently Rheeder isn't competing this year

adrennan (May 19, 2021 at 7:50)
slopestyle is going through the growing pains that ski slopestyle went through 10 years ago where it becomes spin it to win it.