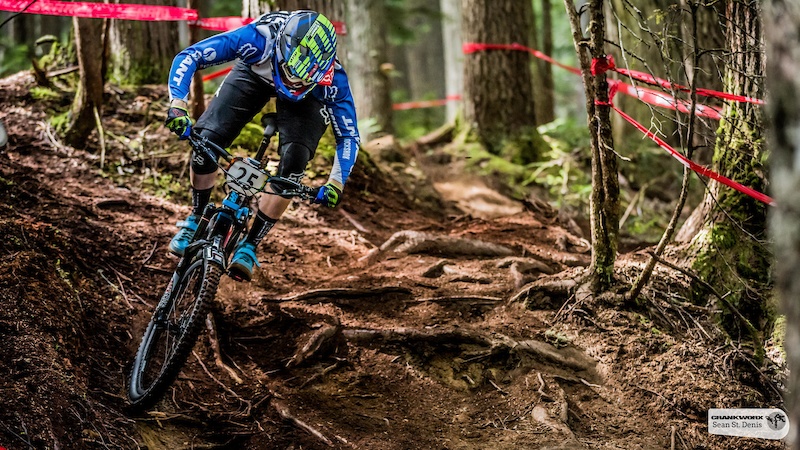 It's one of the most anticipated course releases of the season and it's coming to you all week. Crankworx is releasing the SRAM Canadian Open Enduro presented by Specialized, Round 6 of the Enduro World Series, in stages all week via Facebook, Pinkbike and Crankworx.com.

Sunday evening, Stages 2, 3 and 4 of the SRAM Canadian Open Enduro presented by Specialized were released, with Stage 5 to be released Tuesday evening and Stage 1 Wednesday evening. If you are racing, or planning where you are going to watch from, this is your queue. 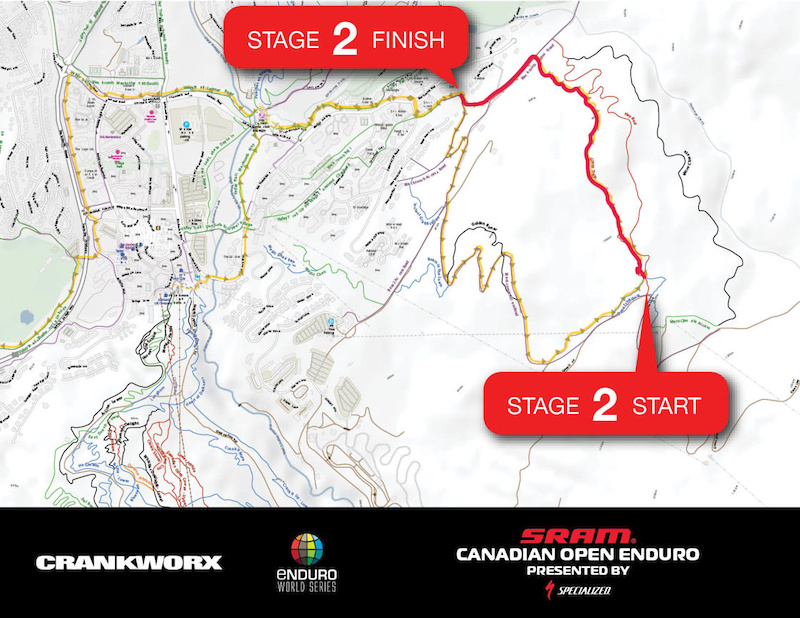 T2 – Up behind Snowberry Condos onto the Blackcomb Ski Out trails…. Heading up Blackcomb to…

Stage 2 – Crazy Train. Whistler Classic brought back to life a few years back for the infamous #Crankzilla EWS Race in Whistler. Since 2014, the track has undergone some rerouting to the upper section. The trail is running great, and has a few spots of pedaling mixed into what makes Whistler famous… loamy, rooty single track. 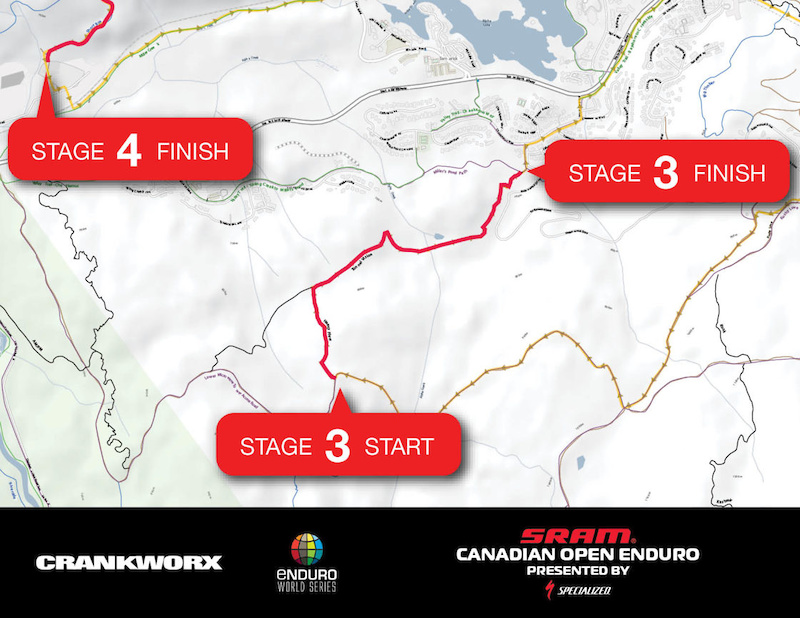 T3 – Takes you down the Valley Trail to Creekside. Up the Creekside Gondola, down Upper Dusty’s DH, along Love Canal to Kushy Love and onto the Lower Microwave Tower Access Road.

Stage 3 – Heavy Flow to Tunnel Vision. Heavy Flow is a lesser known trail on the lower West Side of Whistler Mountain. Heavy Flow lives up to its name in the sense that there is serious flow to be had if you can stay focused and on top of the bike as it drops through a series of steep and challenging sections... Become a passenger and you could end up in the woods. Heavy Flow deposits you into the middle of Tunnel Vision… easily the trail that is going to require the most pedal strokes in the 2016 SRAM Canadian Open Enduro. It finishes with some bermed up flow after a rebuild in 2015. Stage 3 will also be stage 2 of the SRAM Canadian Open Enduro Challenger presented by Camelbak. 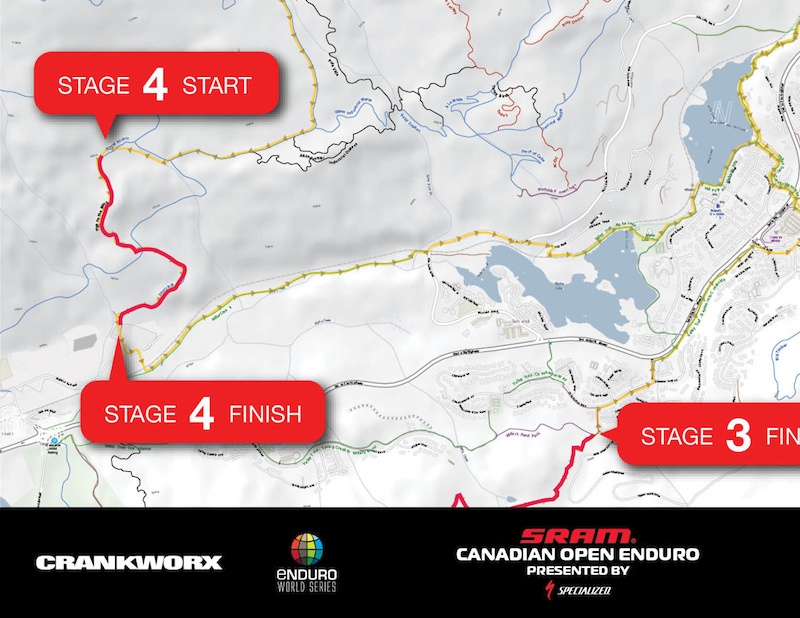 T4A – Brings you back to Creekside for a short lunch break.

T4B – From Creekside you’ll follow the Valley Trail towards Alta Lake coming out at Alta Lake Road, up Scotia Creek climb and onto Stonebridge Place road. Up Darwin’s to the Rainbow-Sproat Flank Trail heading south towards the start of…

Stage 4- Pigs on the Wing to Short Bus. These two trails don’t see nearly the traffic the rest of the Whistler Valley but expect that to change after this year. Both trails are mint at the moment and have all sorts of technical tricks to catch you up. Chutes, slick rock, loose and loam… it has it all. Short bus gets fast and rooty and finishes with low angle, loose, tight and narrow trail. The slogan here will be “Slow is new fast”.


Stay tuned for stages 1 and 5, being released later this week.

jaycubzz (Aug 8, 2016 at 13:20)
that doesnt even work. theyve had enduros long before trailriding and super D were known as enduro

EnduroManiac (Aug 8, 2016 at 13:53)
@jaycubzz: no it started about at the same time. Remember: you are not the center of the world. It's not cause you know enduro for five years that the sport is five years old. I know my wife for 7 years now. And you know what? She existed before! She's not seven years old!

Heres a specialized enduro from 2000. if you can link me to an MTB event called an enduro before 2000, you win.

this article states that enduro started in 2003. obviously one source isnt definitive, but I cant find any that say anything else.

This one says the first race called "enduro" was 2003.

EnduroManiac (Aug 9, 2016 at 0:18)
@jaycubzz: I confirm it's about the same time. Anyway I was referring to your "long before trailriding and super D were known as enduro". I actually know enduro for much longer (and I mean the MTB version, MX even longer) than I know what a trail or super D is. Your perspective is obviously your perspective. Nothing more.

BerrysBattle (Aug 9, 2016 at 2:39)
Come on guys! let's not worry about what company owns what trademark or brand and just enjoy the fact we get to ride bikes. We can leave the guys in suits to go over all the complications of trademarks and brands.......I'm pretty happy with that deal!

adrock-whistler (Aug 8, 2016 at 19:56)
Heavy Flow and Pigs are kinda of strange choices. My friend's built and maintain Heavy Flow and they had no idea the trail was being used until after the announcement. It's by no mean's their trail, but I thought they would have gotten the heads up.

paulmyork (Aug 8, 2016 at 20:38)
kind of makes me sad about pigs but trails are made to be ridden. I remember seeing the guys up there right when heavy flow was finished. seemed a little concerned about it being discovered ("toonie racers not allowed.." IIRC) but I am pretty sure they realize it is only a matter of time in Whistler.

s100mphplus (Aug 9, 2016 at 4:35)
Unless they own the land then there would be no reason to inform them, the organisers ask permission from landowners to use trails on their land. It's a bummer I know and your friends are going to be busy repairing them after they get smashed by the EWS event!

wilsonians (Aug 9, 2016 at 9:39)
I've never ridden pigs, but looking at that video and the lack of width and man-made features, I have a feeling that trail is gonna get destroyed and will be in need of a lot of help after hundred of EWS pros start crushing through there. Does EWS or other traveling circuits have any responsibility for trail maintenance after they just show up and rip through trails? If not, they should to some extent.

flipfantasia (Aug 9, 2016 at 13:05)
@ianswilson815: clearly you haven't, there are no wood features on the course itself, the one there is I don't think anyone actually rides anymore and will be taped outside the course. Crankworx has contributed tens of thousands of dollars to the valley trail network over the past 3 years and put effort and money back into them, at least here in whistler. I know the trail pretty well as I've been riding it for over 5 years, it'll be fine.

wilsonians (Aug 9, 2016 at 13:18)
@flipfantasia: Perfect! Just had no idea haha and it looks pretty narrow and not ridden heavily in that video so I was curious. Cheers

tiagofernandex (Aug 8, 2016 at 15:59)
I actually disagree. It looks like a ghost, i like to feel the feedback from the terrain.

jgottya1 (Aug 9, 2016 at 7:37)
I would love to have those trails close at hand. To all the locals, hopefully you realiza how lucky you are to have such epic single track. I know there are many more sections and mountains nearby but that is some sweet forest. I would rinse and repeat that all day until my arms fell off.

flipfantasia (Aug 8, 2016 at 13:28)
lower tunnel vision refurb was a worca trail night in June this year

shirk-007 (Aug 8, 2016 at 13:47)
Rude is going to slam a 5 minnute gap into everyone on the flat pedally section of Tunnel Vision. I am not looking forward to that in the Challenger course on Saturday. Props to WORCA on the trail work.

DMal (Aug 8, 2016 at 15:36)
These trails are running great. I happened to ride them all yesterday (unknowing that they were the race stages). That chute on Pigs will be exciting. We raced that trail in damp conditions during the Funduro a couple years ago and it was an absolute gong show.