Getting to Know Matt Jones

Arguably one of the most technically gifted dirt jumpers on the scene, talented Brit, Matt Jones is a rider who just loves to ride his bike. Heralding from the breeding ground of steeze that is the southeast of England (think Sam Reynolds, Bernard Kerr, Olly Wilkins, Brendan Fairclough, etc), Matt's rise into the elite ranks of slopestyle competition cemented itself this season, winning the Colorado Freeride Festival, beating many of the sport's heavy hitters in the process. And after a series of injuries and frustrating setbacks in recent years, Matt is now fighting fit with his eyes firmly on the prize... 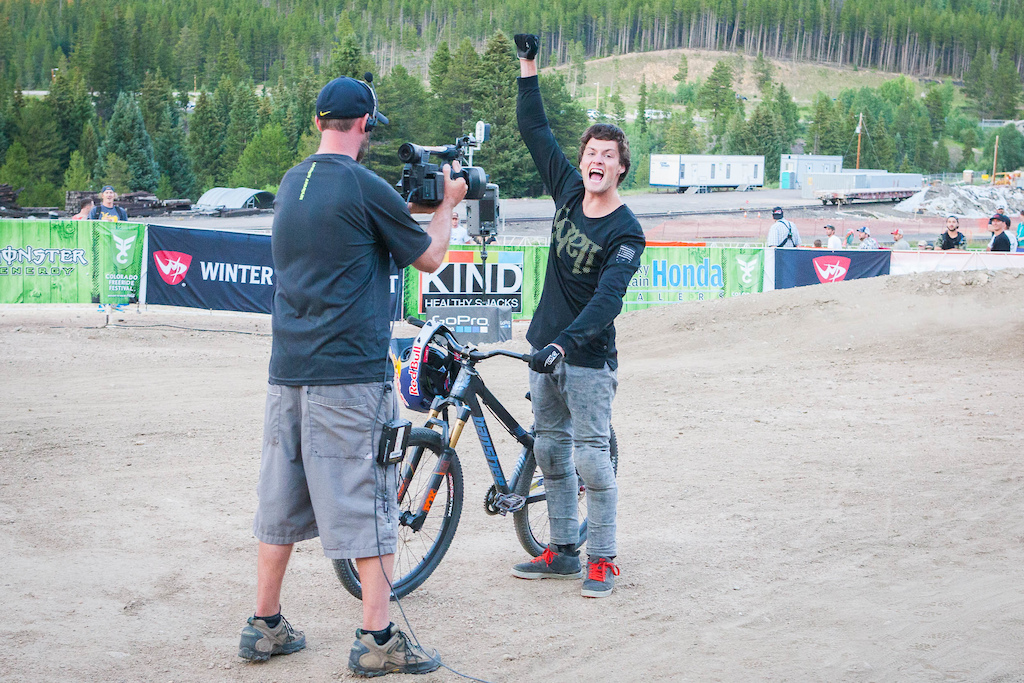 Who is Matt Jones?
Just a guy who got hooked on bike riding.

Where are you from and where do you live?
I grew up in Woburn, England and never really felt the need to get away from here so 21 years later and I’m still living in good old southeast England.

Who do you ride for?
I’ve got some new sponsors this year... I'm riding for Banshee Bikes, TSG, WD-40, Gusset Components, Ilabb and Royal Racing, as well as continuing my relationship with Red Bull, Halo Wheels, Five Ten and Fox. 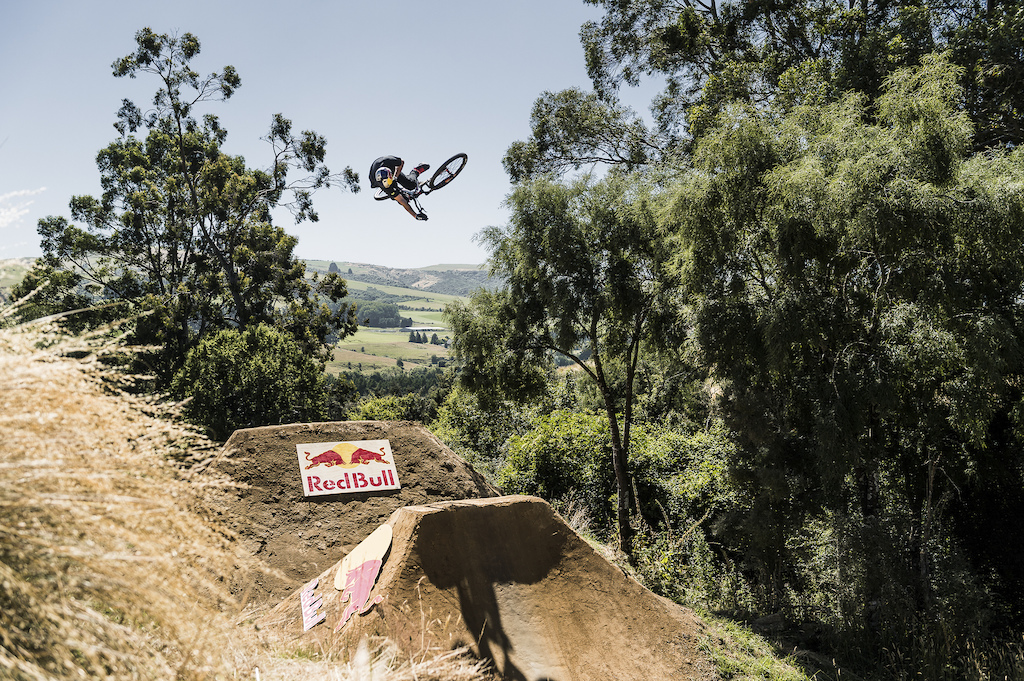 Where are you happiest?
I'd say mid-train through a set of dirt jumps in the heart of summer with a group of mates all screaming abuse at each other haha!

What’s been your favourite race/contest venue?
The highlight of the year is when I get out to Whistler - that place is unreal! I’m sure any British person thought the same thing when they gazed up at a mountain instead of a slippery hill...

Where are your favourite trails?
Jimmy Pratt’s trails in London, they’re immaculate and it never ceases to amaze me how much effort they’ve put into the building those trails.

What are your strengths?
I’m a big fan of doing my tricks on big jumps, so perhaps that?

What are your weaknesses?
Drivers who hog the middle lane...

What’s been your worst crash over the years?
The worst crashes have always been the pointless ones that catch you off guard... I broke my wrist pretty awkwardly in 2014 doing the same trick I’d been doing all day, typical! 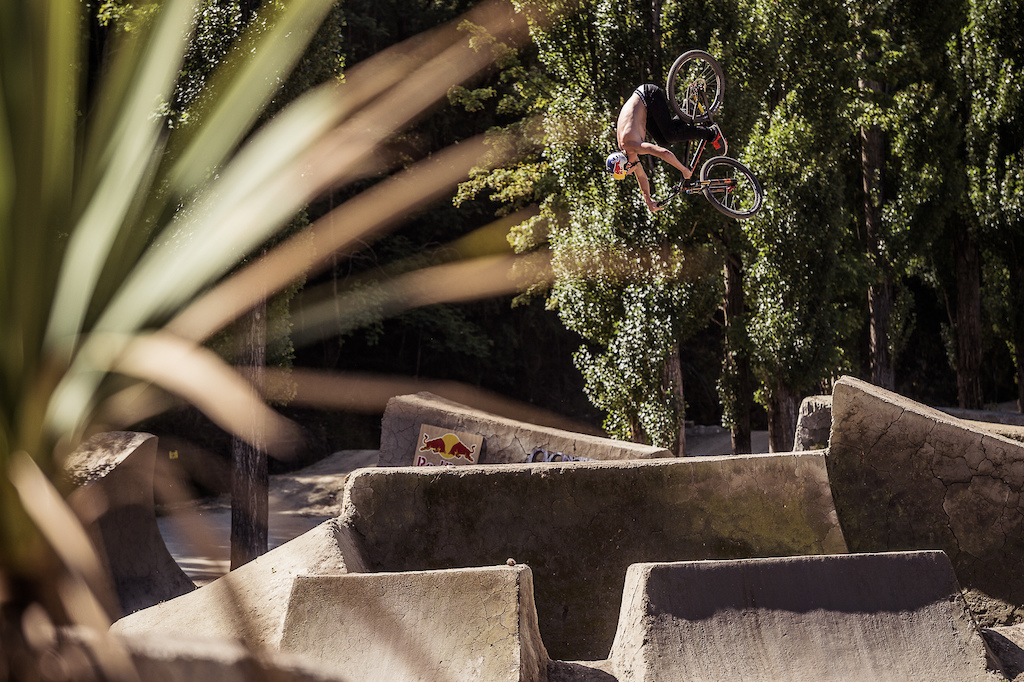 What’s been your luckiest escape?
Almost missing the entire landing on the final step down at X-Games. I still ate shit but the crash could have been a lot more savage.

Which bike from over the years, conjures up the best memories?
Probably my first rigid Identiti dirt jump bike. That 's where it all began with tricks. I bent the frame and rode it twisted for a year and loved every minute.

What bikes are you riding right now?
My Banshee Amp is the weapon of choice. 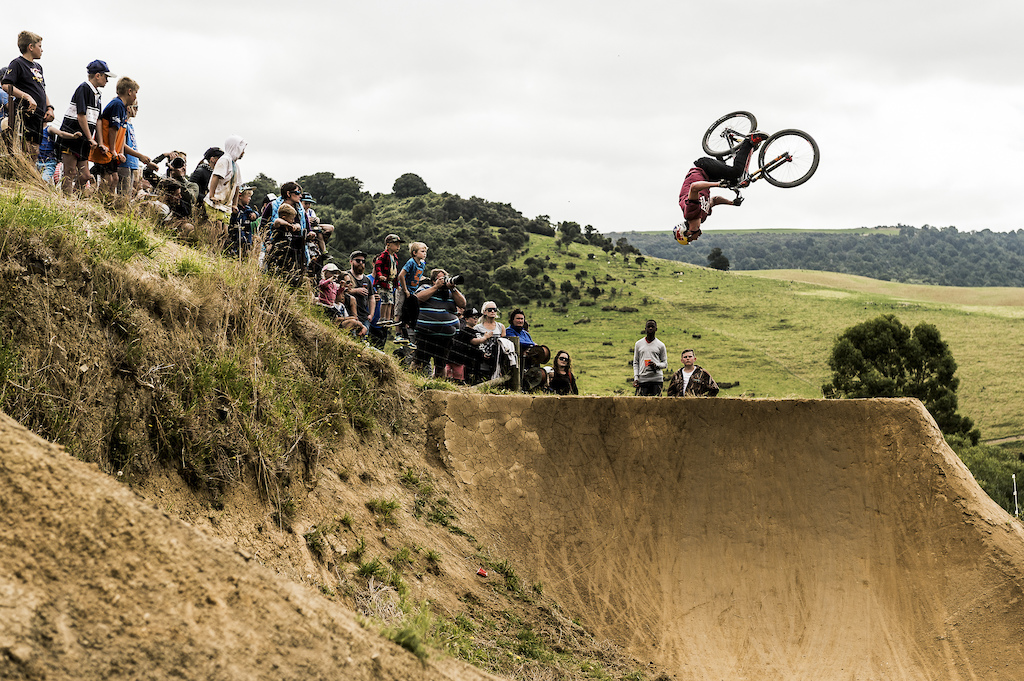 Who’s your favourite rider?
It has to be Brandon Semenuk, but my first ever idol is Glen Coe.

Who or what inspires you?
Anybody who is pushing their limits or finding new avenues to go down is a huge inspiration. What Dane Searls was pushing in BMX dirt was hugely inspiring... If you haven’t seen the Giants of Dirt videos, then check them out!

What do you enjoy doing away from bikes?
I’ve been dabbling in skating bowls which feels completely different to what I’m used to, so that’s been keeping my evenings busy lately. 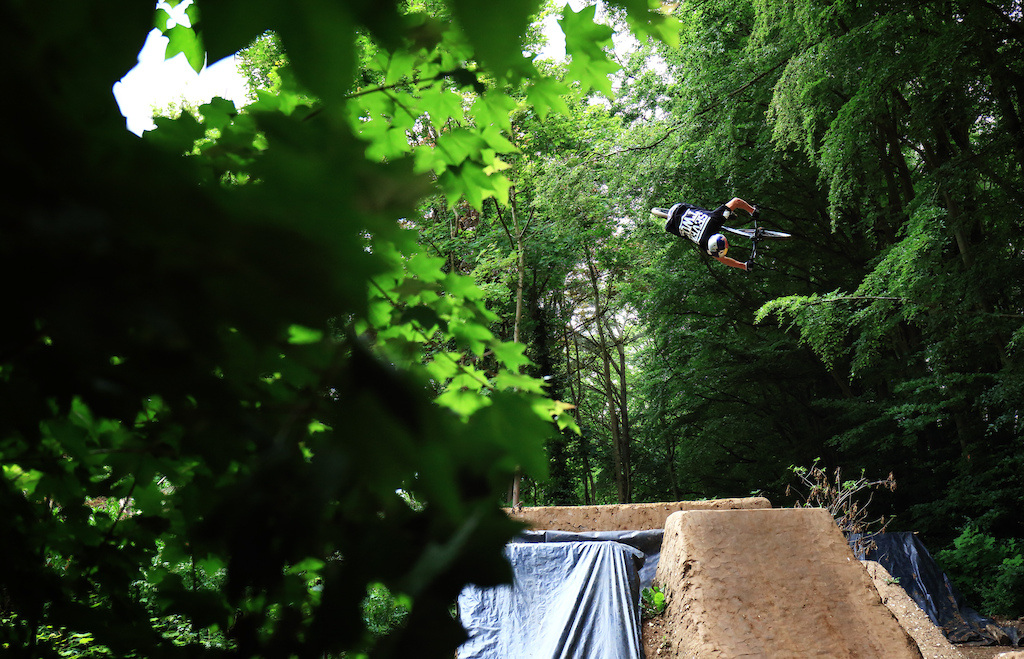 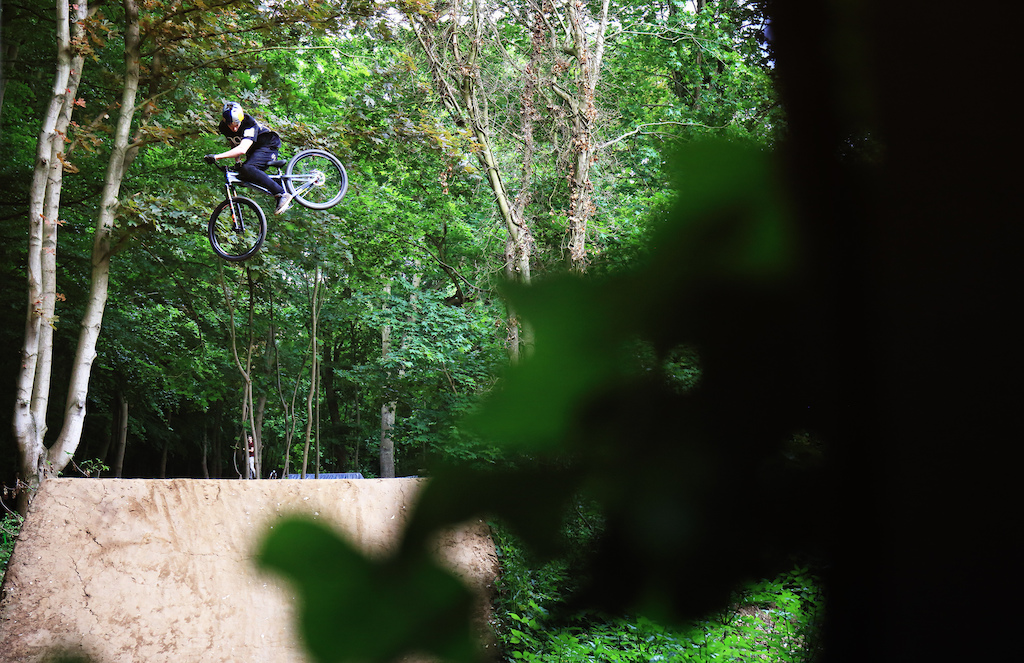 What are you listening to right now?
The wind and rain outside...

What’s your favourite TV show?
The hours I’ve spent watching Prison Break...makes it a no brainer.

What’s your favourite motto or saying?
In the words of Sam Pilgrim, "YOLO".

What grinds your gears?
Punctures on XC rides because I’m always that guy without a spare tube...

What makes you happy?
A combination of good weather, good jumps, and fun people to ride them with. 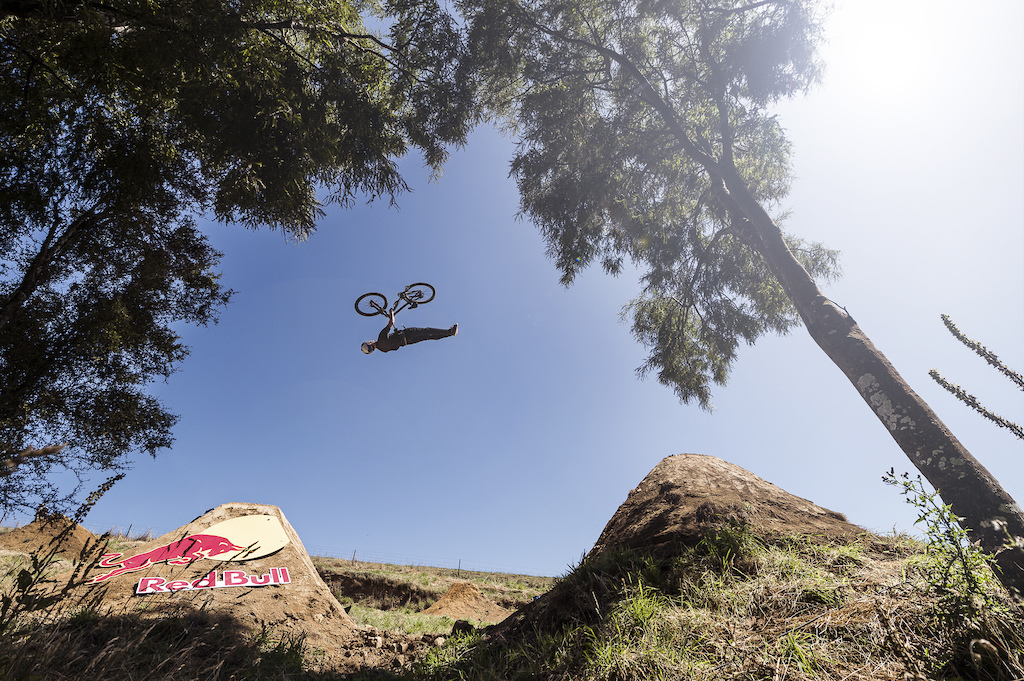 If you weren’t a pro mountain biker, what would you be doing?
I’d be being told "No sir, you’re not qualified to be an astronaut".

If you were in charge of the sport, what changes would you make?
I’d open events up to more riders, give more opportunity to younger riders to qualify for events and prove themselves. And I’d like to see more technical courses that bring out more rounded talent from a trails background. 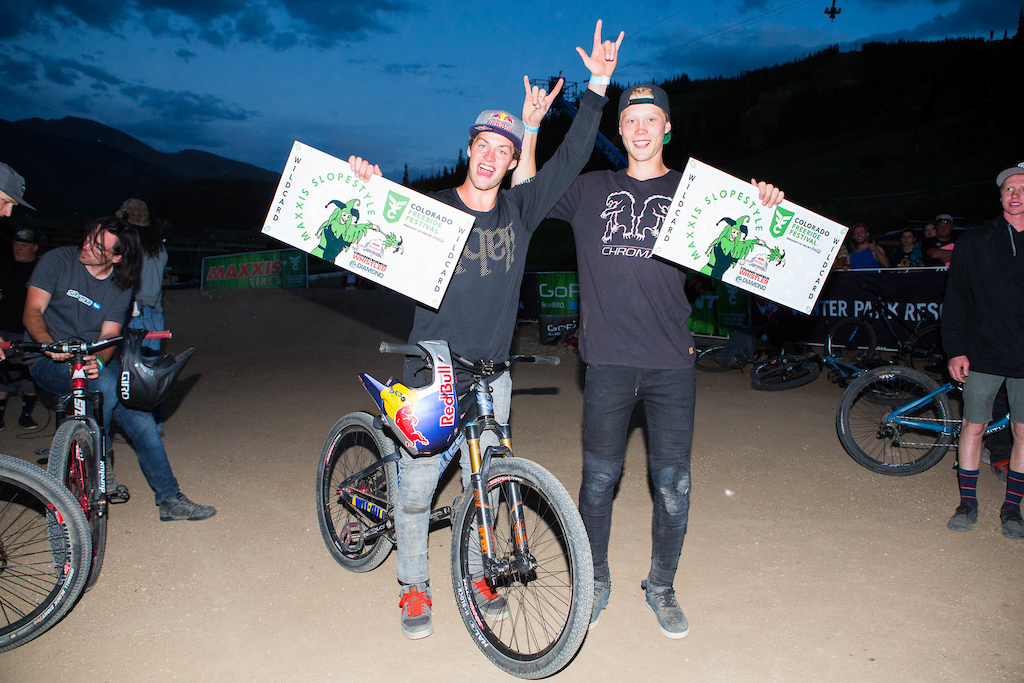 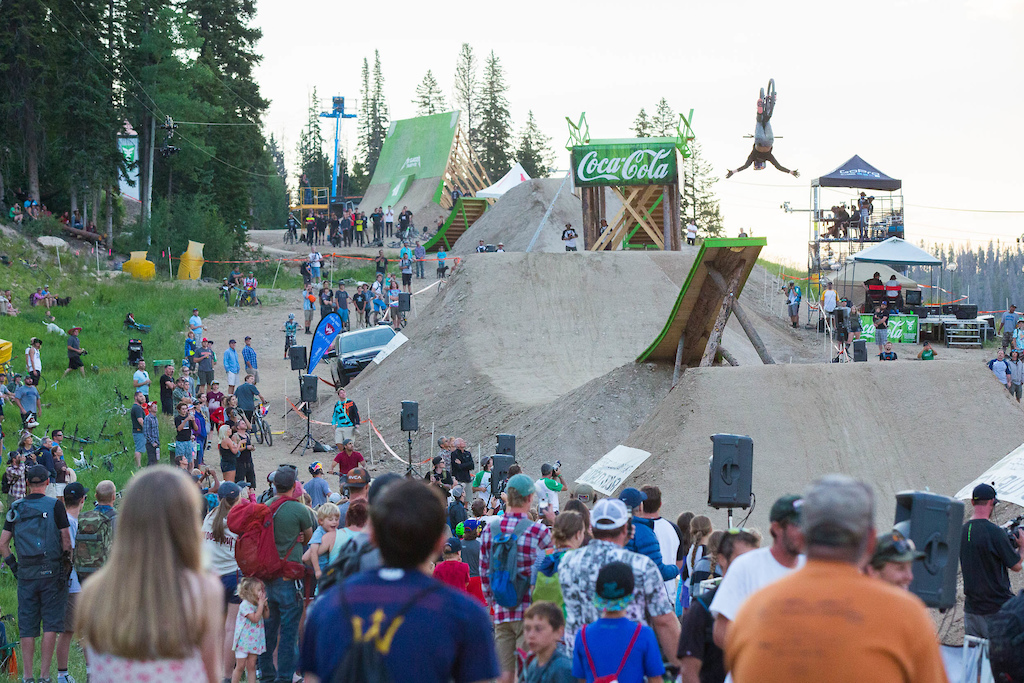 What does the future hold for Matt Jones?
My focus lies on the (FMB) World Tour and getting some podiums in the bigger contests. But I’d love to work on some filming projects in the future that are influential to people who ride but also those who haven’t discovered the fun of bikes yet.

map-guy (Oct 15, 2016 at 7:31)
What crappy timing to have your article sandwiched between red bull coverage...but that's ok, he can only stay off the radar for so long, it's inevitable. Also that Darkside is bangin!

woodtigerfish (Oct 15, 2016 at 8:50)
On the contrary I jumped at the chance to watch something different... I love big bike madness but my heart and passion is dirt jumping. Overall we need MORE DJ videos.!!!

Freerider-Dave (Oct 18, 2016 at 6:31)
Banshee Woo! Banshee need to get a Banshee rider into next year's Rampage. Banshee needs more exposure for the awesome company that they are. Look what happened to YT when they entered rampage they exploded and Capra orders are still on backorder now. Banshee are better than YT too.

and thx for giving me hints for about the right speed