Dec 29, 2010 at 12:41
by Paul Clarke
Share
Tweet
51 Comments
2010 was my first full year in the world of mountain bike photography. Living in the lower mainland of British Columbia proved it was not very difficult to meet up with some pretty amazing riders! This has been the most fun I've ever had taken photographs! 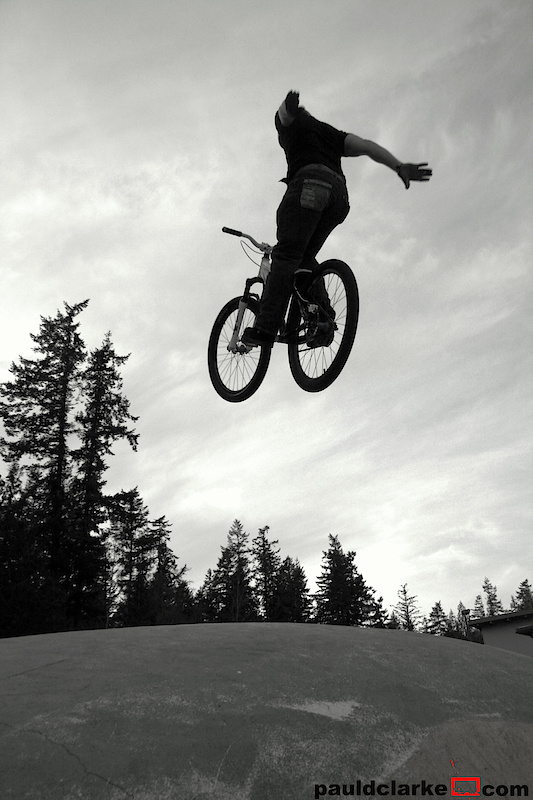 The year started off with meeting Frankie Vass. His street riding is like none other. 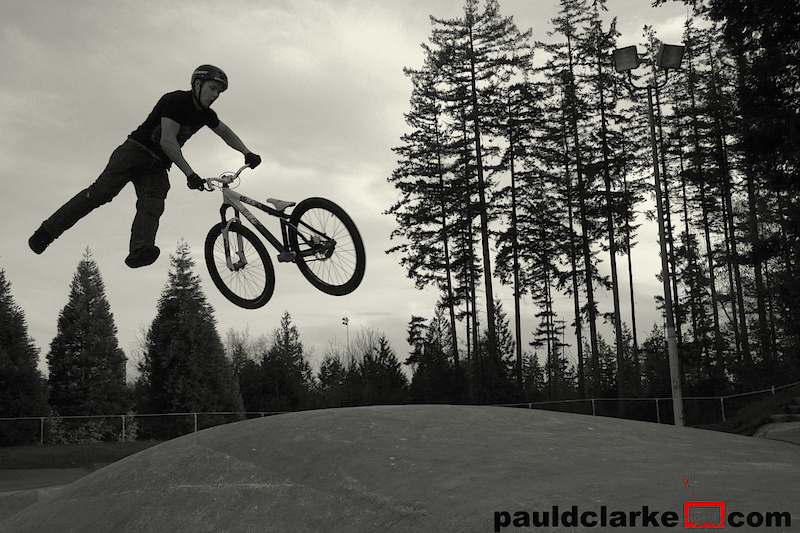 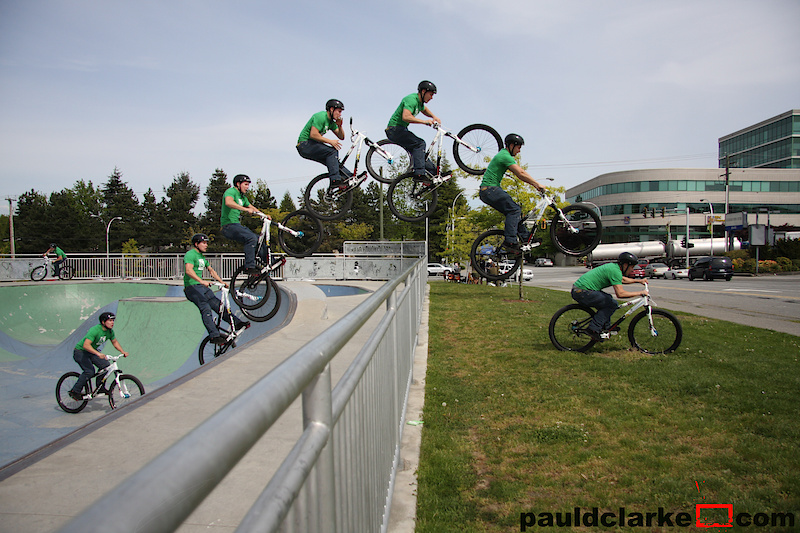 Bar spin out of the Guilford Bowl, Surrey B.C. 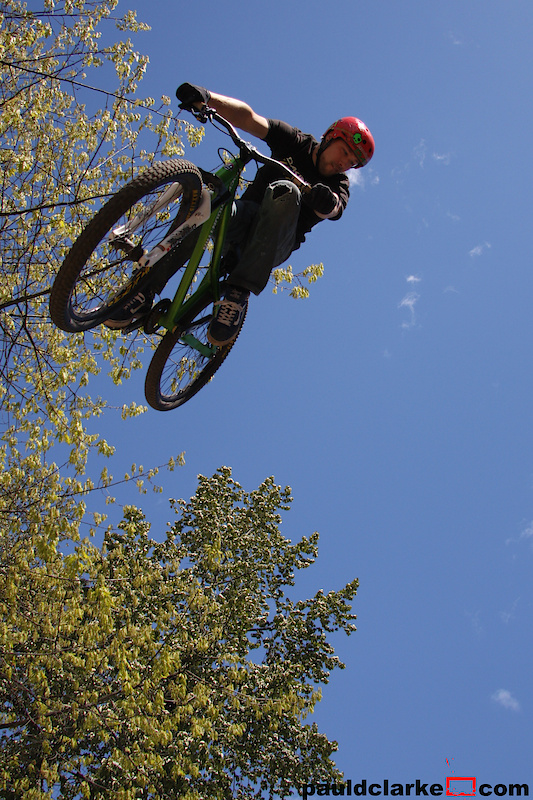 Gulevich doing a 3 off a DJ at John Henry Days in North Vancouver. Never seen anyone so relaxed in the air! 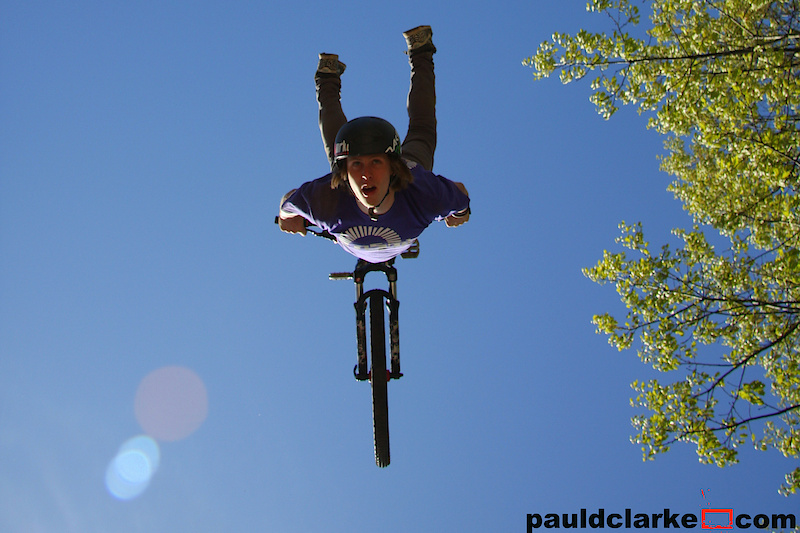 Favorite shot of the day goes to Justin Wyper doing a super flip! 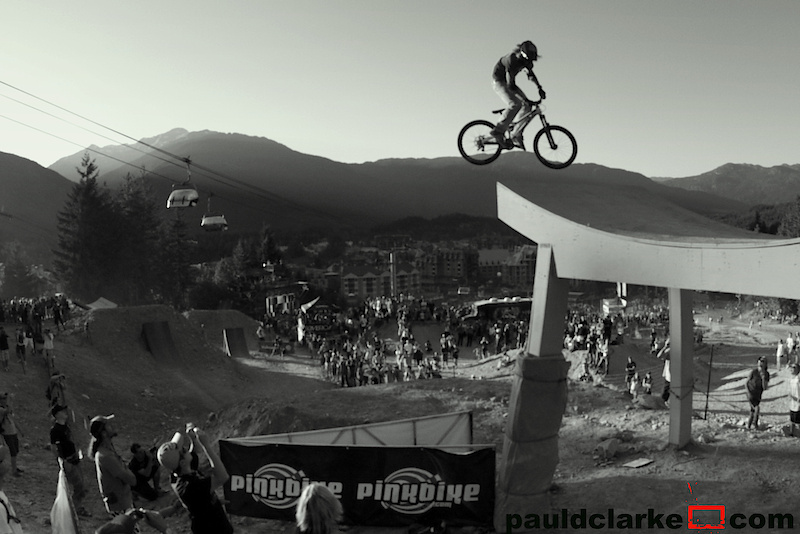 Off to Whistler for Kokanee Crankworx. During the competition Whistler has never been so busy in its history. 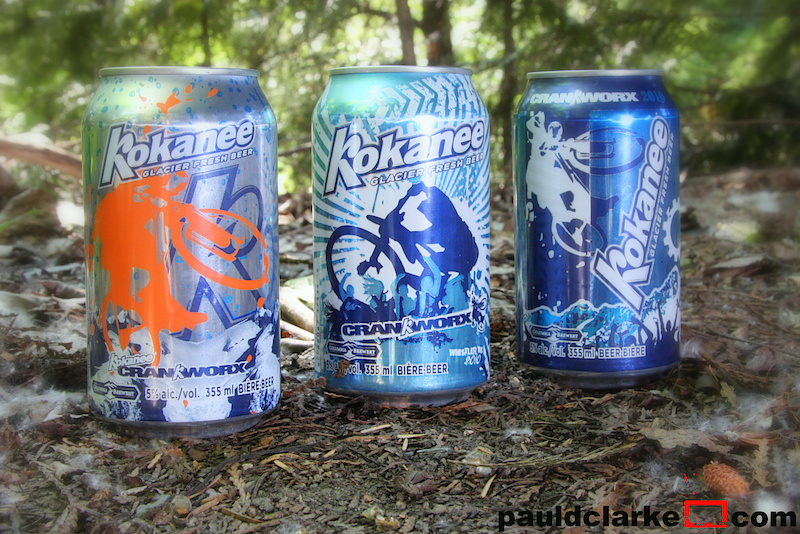 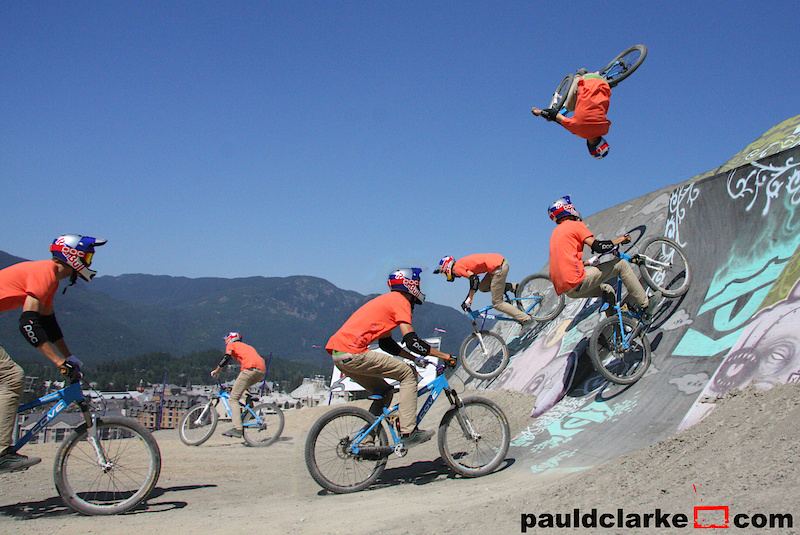 4 days before the end of the year gave me my 3rd P.O.D of 2010! Martin Soderstrom flairing the Race Face quarter during the morning practice. 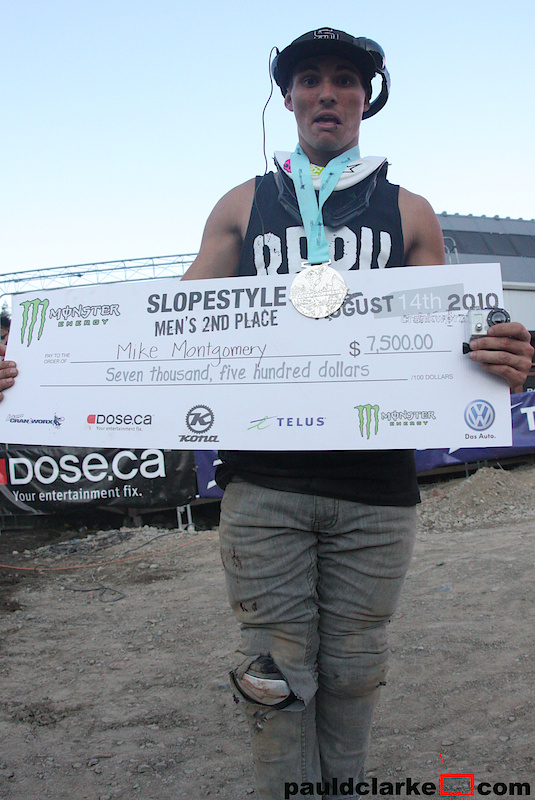 Mike Montgomery getting a WELL deserved 2nd spot on the podium. Looking like a sponsor's dream sporting his Skull Candies and GoPro HD cam in hand seconds after stepping down from the podium. 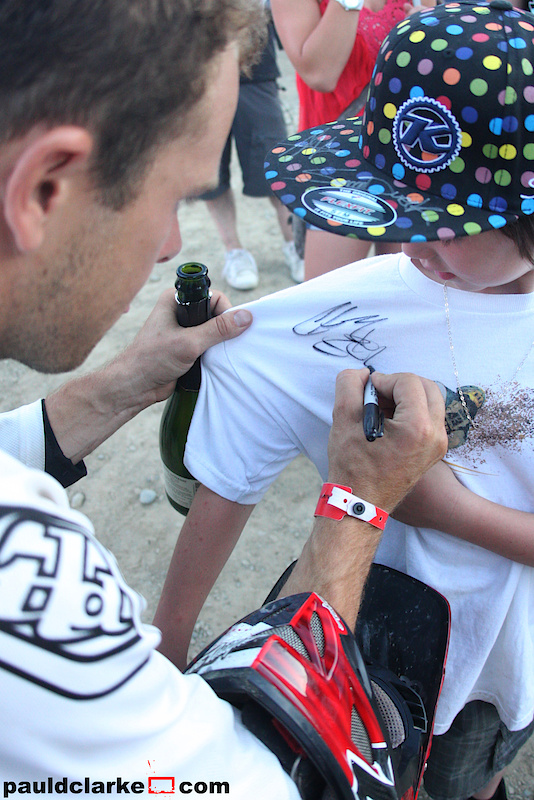 One of many autographs Zinc signed in the winner's circle. 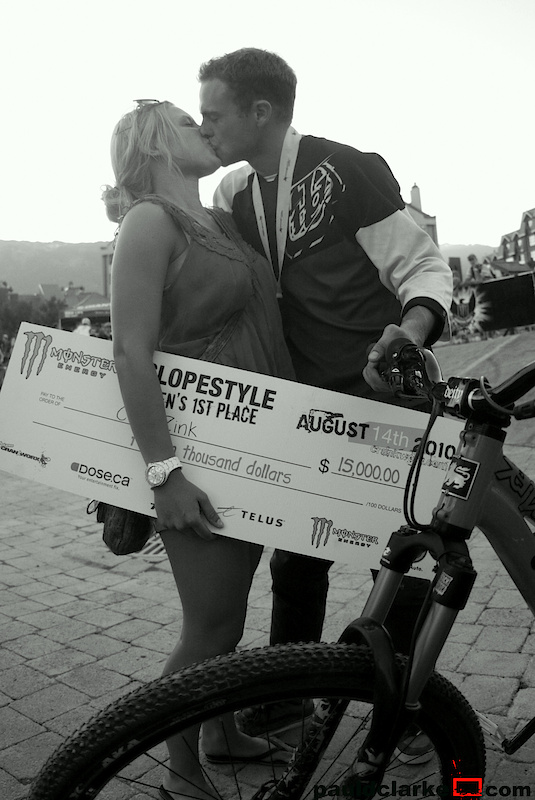 makonastinky (Dec 31, 2010 at 7:28)
of course she has all his money, its probably gonna go to redecorating or some bullshit in the house..

TORIBIO (Dec 31, 2010 at 4:31) (Below Threshold)
ouch that´s true! he has a black market sticker on his helmet!
I confused them because of the fork i thought he was riding x fusion

JumpbikeLife (Dec 31, 2010 at 11:06)
But Semenuk rides rockshox aswell not x fusion. I would say Your just digging yourself a deaper hole

TORIBIO (Jan 1, 2011 at 8:04)
jumpbikelife that is why i thougt it was semenuk because he is riding rockshox not x fusion i know that justin rides x fusion and semenuk rides rock shox so i twisted them...

JumpbikeLife (Jan 2, 2011 at 12:08)
Mate Justin rides what ever forks he wants to I just watched a video he was riding x fusion on his killswitch then on his downhill he was riding rockshox boxxers. and in a diffferent bike check video he had fox forks on his blk mrkt mob. these videos were all from 2010. so I think trying to decide who the rider is by the forks is incorrect, I have argyl3s on my dj bike. does that mean it could be me in that photo?

the point is that I´m wrong and now i know it, thank you now the photo is well named in my photogallery

and sorry for being that boring haha

paininc (Dec 31, 2010 at 8:29)
Congrats on your first full year...some nice photos there. Just curious how many photos you sold in your first year to magazines, websties, companies, etc...good for other aspiring photographers to have an idea.

paulclarke (Dec 31, 2010 at 8:50)
No magazines yet. In feb 2011 ive got a shot in mountain bike uk, which is being sold in canada now. I have two photos on ridetsg.com of a fourcross rider who lives in kamloops. And some shots on some blogs here and there. Hopefully lots more next year!

chrispilling (Dec 31, 2010 at 16:06)
hows that? you take the pic then you have the rights to the photograph. i took a shot at a redbull event, they wanted one of the shots for a pinkbike article, they had to pay me.

paulclarke (Dec 31, 2010 at 18:43)
I know... Lets not turn this into an immature but infamous pink bike argument. All i stated was that they dont legally have to pay you.

paininc (Dec 31, 2010 at 20:29)
Paul I don't think session416 is starting an immature argument. He does have a valid point that you own the rights to the photographs you take. He also has a valid point about not giving it away for free. A blog post on Pinkbike, and letting them use your photos for free in essential an advertisement for your photography isn't a bad thing. Allowing them to post an article on you and your favourite shots from 2010 from your portfolio, probably is going to get you more exposure than harm.

paininc (Dec 31, 2010 at 20:29)
But session416 has a point in that if a company wants your shots for advertising, magazine articles, websites, etc. they should be paying you. Giving away your work in such areas, really is just puts you in a position to be taken advantage of, and doesn't get you that much further ahead in the vast most cases. If you are serious about being a photographer it will be to your benefit to learn early on that giving away photos will never pay for your travel expenses, food, camera equipment, time, computers, photo editing software, etc.

paininc (Dec 31, 2010 at 20:29)
Some of the best advice I have seen comes from Maria Brophy an author who talks about the business of art, but her advice applies to creative fields such as photography."If a client doesn’t value your work, then you shouldn’t sell it to them cheap, or trade it, and definitely never give it away. Because in doing so, you devalue your work even more. And worse than that, you’ll devalue the work of all the other professional artists out there who care about the industry of art. If you value your work, then others will, too." She has a great blog at mariabrophy.com that deals with the business of art, but again can be applied to most creative professions.

While Harlan is a writer, just interject "photographer" for "writer" , his points are still very valid.
Second video is this are www.youtube.com/watch?v=R2a8TRSgzZY it is really funny when you put certain situations in a different context in the real world.

Again best of luck in 2011 dude, have fun doing your work, build a great portfolio, but bottom line is get paid. If you don't value your work nobody will. If you want to start making some money with your photography and don't know how I can point you to a sources where you will get paid and still build up your portfolio.

Eh, they legally do if they want to use your shot and you want to money for it. If they don't pay (when you want them to pay), and use your shot on the net in a blog, etc, they are stealing. It's that simple. If they don't take down your shot when you tell them to, they are violating copyright laws, and you can legally issue them a DCMA notice, which could get their site taken down (if they don't comply and remove the infraction) until they remove it.

Read up a bit on laws, and copyright so you know for the future. I wouldn't give out my stuff for free, especially if you want to make money from your work in the future. If you give it out for free, and they want another shot from you, don't except them to pay if you start charging for your work...

paulclarke (Jan 1, 2011 at 1:00)
of course, all i said was they dont need to if you dont care about it. legally they do not. if you want them to and they dont then yeah they are stealing obviously. ive got some pics on blogs cause i get my name out there. they didnt pay me. i didnt want them too. that is a smart thing to do. im starting out, it gets my name out there. never said a mag used my pic without payment...

Unhallowed (Dec 31, 2010 at 15:08)
Lucky lager is disgusting. And most german beer isn't great although there is a few that are pretty legit. I gotta say not many beers I have tasted in my travels has beaten Dead Frog Honey Brown. Good ol local award winner. And kokanee is just crap 'mainstream' beer.

Unhallowed (Dec 31, 2010 at 15:33)
Do not twist my words.
Never said bad. Just that MOST of it isn't "great". MOST Canadian beer isn't great either.
Obviously it's down to personal preference. And my personal preference has been stated.

Varaxis (Dec 31, 2010 at 23:29)
Bitburger is cheap and easy to drink in mass quantities and even Heineken has its good points and I don't complain at all. Not really stuck on one brand, but even I witnessed guys in Germany drinking Budweiser when I visited 4 years ago. What's up with that?

Free beer is the best.

Bambergator (Jan 1, 2011 at 10:47)
no american beer is better than german beer. trust me. I live in the capital of beer. Bamberg, 11 breweries. and over 200 in the villages around. you guys have no idea..., Becks, Bitburger is all shit. You have to try the little breweries in bavaria

Yes, LuckyLager is also shit. But it has no chemical additives like kokanee. In Germany beer consists only of water, hop, malt. Additives are forbidden as it should be!

z-man (Jan 1, 2011 at 10:58)
kokanee isn't American, its Canadian, get it right.
plus, here on the west coat we have a plethora of micro brewers, and a new beer to try every day, Canadian beer definatly does give German beer a huge run for their money. Everyone knows the best beer in the world is innis & gunn from scotland.
I was born in the Netherlands so i have to be proud of the great dutch beers, such as grolsch and 5 horses

chris-adam-media (Jan 1, 2011 at 14:11)
fuck me i love pinkbike, the only place where someone can showcase their photography and people argue about beer under it...

bikingnrugby (Dec 31, 2010 at 10:04)
Great year, nice pics. Anyone else rekon cam's girls is thinking shopping trip with that cheque in her hand

Way to rock it!

pd: the super flip is not from justin wyper is from brandon semenuk