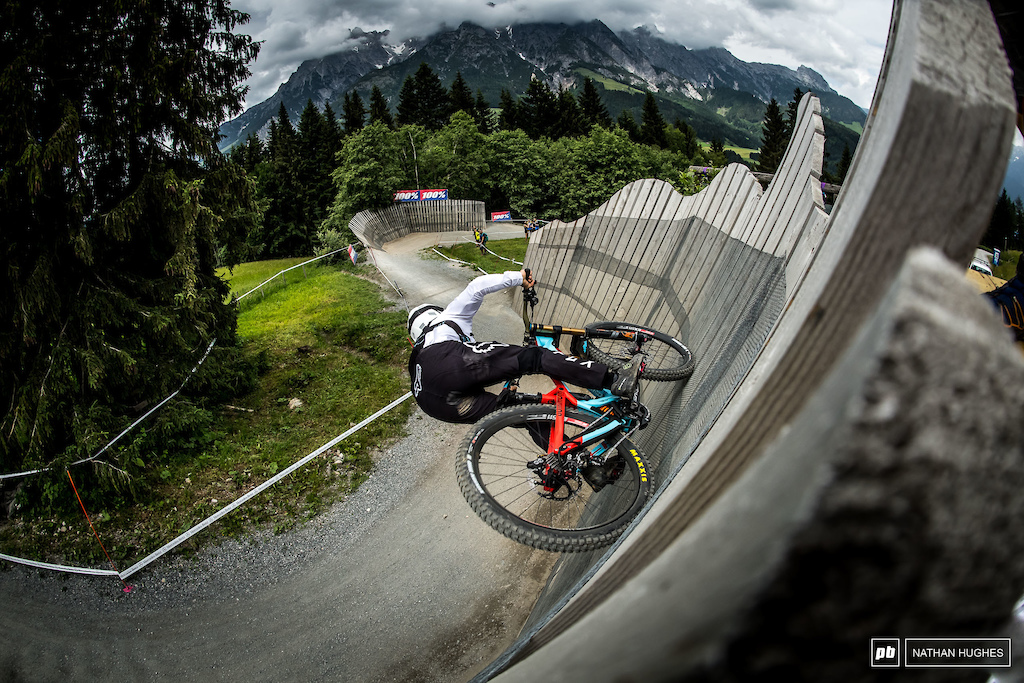 Another beautiful day in Leogang today for finals. Austria has stayed tame with the weather, much to the appreciation of riders.

It was an unlucky morning for top junior men's qualifier Thibaut Daprela who was up at all four splits but came in second behind Kye A’Hern by only 0.050 seconds. Vali Holl continued her domination of the junior women’s field, winning by a 15 second margin, tailed by Nastasia Gimenez and Ottilia Johansson Jones.

The women’s elite race welcomed Rachel Atherton back to the top of the podium, her first World Cup win so far this season. Myriam Nicole was on a killer race run, ahead of Rachel in the hot seat at the last split, but a mistake cost her the few tenths of a second that put her in 2nd when she crossed the line. Disaster struck for top qualifier Tahnee Seagrave, who had a run in with the tape mid race run, and appeared to have exited the course. While the final verdict was up in the air, she took third place on the podium, only to be disqualified seconds later by the UCI. With Tahnee out, Tracey Hannah moved up to take 3rd, just under 4 seconds off Rachel’s top time.

In men’s elite, Amaury Pierron took back to back World Cup wins with an incredible run and now leads in the overall. Luca Shaw gave him a run for his money. As the last man on the hill, he was up at the third split, but a crash in the woods took him out of the running. Aaron Gwin was going for the title of the first man to take the win at the same venue for four years in a row, but with a few mistakes at the bottom of the course, he took second instead. The top five was rounded out with Laurie Greenland in third, Troy Brosnan in fourth, and Loris Vergier in fifth.

On to Val Di Sole!

6:34am: Luca Shaw crashes. Amaury Pierron with the win for the second weekend in a row.

6:26am: Pierron takes Gwin's top spot away. Luca Shaw and Brook Macdonald left at the top.

5:57am: Aaron Gwin, on a mission to be the first man to win at the same venue four years in a row, has a few mistakes at the end but still pulls off a top spot finish with the top 10 left to go.

5:42am: A close call along the tape, before the wall rides, but Dakotah Norton takes the top spot so far by just under a second.

5:39am: Fastest to split one in qualifying, Reece Wilson is up by almost a second in his race run, but makes a mistake in the trees and loses time.

5:24am: Finn Iles washes out in the first off camber corner right out of the gate, losing too much time to crack the top spots.

5:22am: Dark clouds are rolling in at the top of the course.

5:20am: Men are on course, midway through the start list, Charlie Harrison is on the hot seat.

4:19am: Tahnee has officially been DQ'ed.

4:13am: Tahnee overshoots on the motorway and looks to have exited the course... She crosses the line in third.

4:10am: Last year's winner, Tahnee Seagrave is the last woman at the top.

3:57am: Myriam Nicole was up at the last split, but a mistake at the end cost her, and she takes the second spot.

(*All time is Pacific Time)

easyslorider (Jun 10, 2018 at 7:39)
I think Brendan was more stylish, but he wasn't really going for the race run like Blenky

enduroNZ (Jun 10, 2018 at 14:33) (Below Threshold)
Look great but does him no favours in terms of time. He probably lost a few seconds prancing about.

src248 (Jun 10, 2018 at 3:54)
Oh wow, they've actually done a fantastic job with the camera placement this race, they're almost all on the rough technical bits

NotNamed (Jun 10, 2018 at 4:38)
She is destroying it everywhere- Im really curious for her future carrere... She just kicks ass

Capitanbikes (Jun 10, 2018 at 6:43)
I take my hat off for Aaron Gwin with that incredible run even though his thumb was this located %

thegeologist (Jun 10, 2018 at 5:50)
Props to RedBull the Footage is really well planned. It makes you appreciate the technical sections and how fast they are going on the jumps!

erikkellison (Jun 10, 2018 at 9:43)
Did anyone else think the Pacific Islander at the last corner was hilarious?

mtb-journal (Jun 10, 2018 at 22:59)
We noticed that, too at FW. Never applied it correctly. Then he didn't use it a Leogang for a while so we thought maybe somebody told him. But then it came again. My wife suggested we play a drinking game, every time he says feasible, bottom's up. :-)

raging-hippo (Jun 10, 2018 at 4:28)
I wish UCI would apply time penalties instead of complete disqualifications. 99% of the run was fine and that should count for something. A 5 second penalty would be fair.

vid1998 (Jun 10, 2018 at 4:52)
There should be a difference between cutting and going off course. Like in motorsports if you go too wide and get off track you already loose time so there's no need for a penatly but if you cut a corner you get one.

RatHunter83 (Jun 10, 2018 at 6:59)
I think in this case a time penalty would be fair. She didn't intentionally go outside the track. If this was a tight, slow speed, woods section and she took out an inside corner that would be a different story.

Jamminator (Jun 10, 2018 at 13:52)
What time penalty do you propose? 5 seconds? 60 seconds? It would need to be a sizable time penalty, to where if a guy like Gwin went off course, they shouldn't be able to finish 25th even with the time penalty added, because that rewards them and punishes riders below who were maybe more cautious.

I say if off-course mishaps are limited to one or two top riders a season like we have now, I think the rules are pretty good as they stand. Introducing technical regulation is only going to make things more complicated.

stretchza (Jun 11, 2018 at 2:21)
not a time penalty..but some discretion is required. she gained nothing by going out..in fact she lost time. Maybe there shouldnt be so many poles on a straight like that, or that area should have been taped wider

The track is taped the same for everybody. There is no reason the track should be taped wider just because a few riders didn't manage to stay on course. That's part of the game.

atrokz (Jun 10, 2018 at 15:25)
@makripper: depends on rider. It isnt any slower or faster. Its about the rider feeling comfortable and being able to work with it. Theres a reason certain riders stuck w it after testing. For some it was slower.

spaceofades (Jun 10, 2018 at 18:12)
@applepie: Not like we're talking Orange here. Both quite good suspension designs (especially the commencal), single pivot be damned.

m1dg3t (Jun 10, 2018 at 12:33)
@Globu: She did an unplanned stoppie through one of the gnarliest sections! I don't know how she managed to stay on! She showed her excellent skill and poise riding that shizzle right out!

She's such a great person and an inspiration to many.

Jamminator (Jun 10, 2018 at 13:41)
Just checked her social media and there was nothing. Kind of mysterious, no comment about it anywhere. Probably some ridiculous UCI rule. Hope to see her back up in the top soon and representing the rainbow.

stretchza (Jun 11, 2018 at 3:06)
it was mentioned in the one segment of something i watched that last week the Syndicate guys almost missed their qualifying start time last week - I wonder if it was the same issue, except she missed it?

Jamminator (Jun 14, 2018 at 22:04)
I just realized she qualified 19th. Under the new rules this season, only the top 15 women run on Sunday (just like only top 60 men now go onto Sunday instead of previously top 80). She also was not a protected rider. That's why she didn't race Sunday.

Ryanfitz81 (Jun 10, 2018 at 8:30)
Those tech sections were exciting and outcomes so variable. The BMX section was filmed so well but it just felt like if someone carried speed into that section through the tech bit they stood half a chance and if they did not, well there was no way to recover any significant time anywhere beyond that. Thats what makes tech racing exciting and thank goodness they threw that new off camber in. Imagine the race without it?

styriabeef (Jun 10, 2018 at 11:17)
Why do they keep saying that Gwin lost time at the bottom?
What I saw almost every of the top 5 lost time to him or had the same time from the last split 2 the finish.
He - and later only Luca - was the only one to do the inside line before the finish table and again seemed to gain valuable time out of it.

src248 (Jun 10, 2018 at 15:04)
His rear wheel went off the track at the bottom of the steps, I don't think it cost a serious amount of time but it definitely wasn't perfect, he could have gone faster

opignonlibre (Jun 11, 2018 at 23:57)
I'd have to look back at the replay but I think there is a rule saying it is ok as long as you rejoin before the next pole holding the tape. On Seagrave's run you could clearly see she ran over 2 successive tape poles.

VZLNMTB (Jun 10, 2018 at 10:03)
man.. so bummed for Brooke.. it seems to me he's having mental strenght/pressure issues.. when they interviewd him before the race he looked soooo nervous..

kingfish666 (Jun 10, 2018 at 11:15)
I was having real problems with the stream on the redbull website. I downloaded the redbull tv app on my Xbox and no more issues.

Dropthedebt (Jun 10, 2018 at 4:26)
It's not about gaining an advantage, the rules say if you leave the course. The course is marked as the base of the poles which unfortunately Tahnee was outside of. Absolutely gutted for her but it would be the same for everyone.

AMGoran (Jun 10, 2018 at 4:37)
@Dropthedebt: But the rule is pointless because you don't go after if you leave the course on a place like that so whats the point of having the rule. Just because it the same for everyone it doesn't mean its good, that if denied to murder all cows then its the same for all cows but it is good?

I didn't say it a good rule, it's the same for all. At the start of the season everyone should know the rules and have read the rulebook.
Why should Tracey Hannah, or anyone else who stayed in the course, be placed lower when they stayed in the course and therefore inside the rules?
I'm gutted for Tahnee, she is in my Fantasy Team, but race rules are race rules and should apply.

Mfro (Jun 10, 2018 at 6:42)
Congratulations to Amaury. Magnificent run. Now they just need to change that bloody awful kit so that he stops looking like the fastest furniture removalist down the hill

Globu (Jun 10, 2018 at 7:17)
Well I actually think Commencal kit this year looks great, and definitely stands out from the rest. Isn't it what you'd ideally like from the kit? Plus, men and women in the same color makes for a good overall team look. Just IMO

CaliCol (Jun 11, 2018 at 19:14)
Haha don’t know how you got downvoted for that! The kit is horrible! Started to think he worked for a package delivery service!

hillman-hunter (Jun 10, 2018 at 8:04)
Shame for Tahnee, bigger shame that it would've been overturned on appeal if she was called Atherton..

smuggly (Jun 10, 2018 at 15:48)
People may have down voted you but you speak the truth, the the officals say some crap like because riding outside the poles didn't benefit her time no DQ.