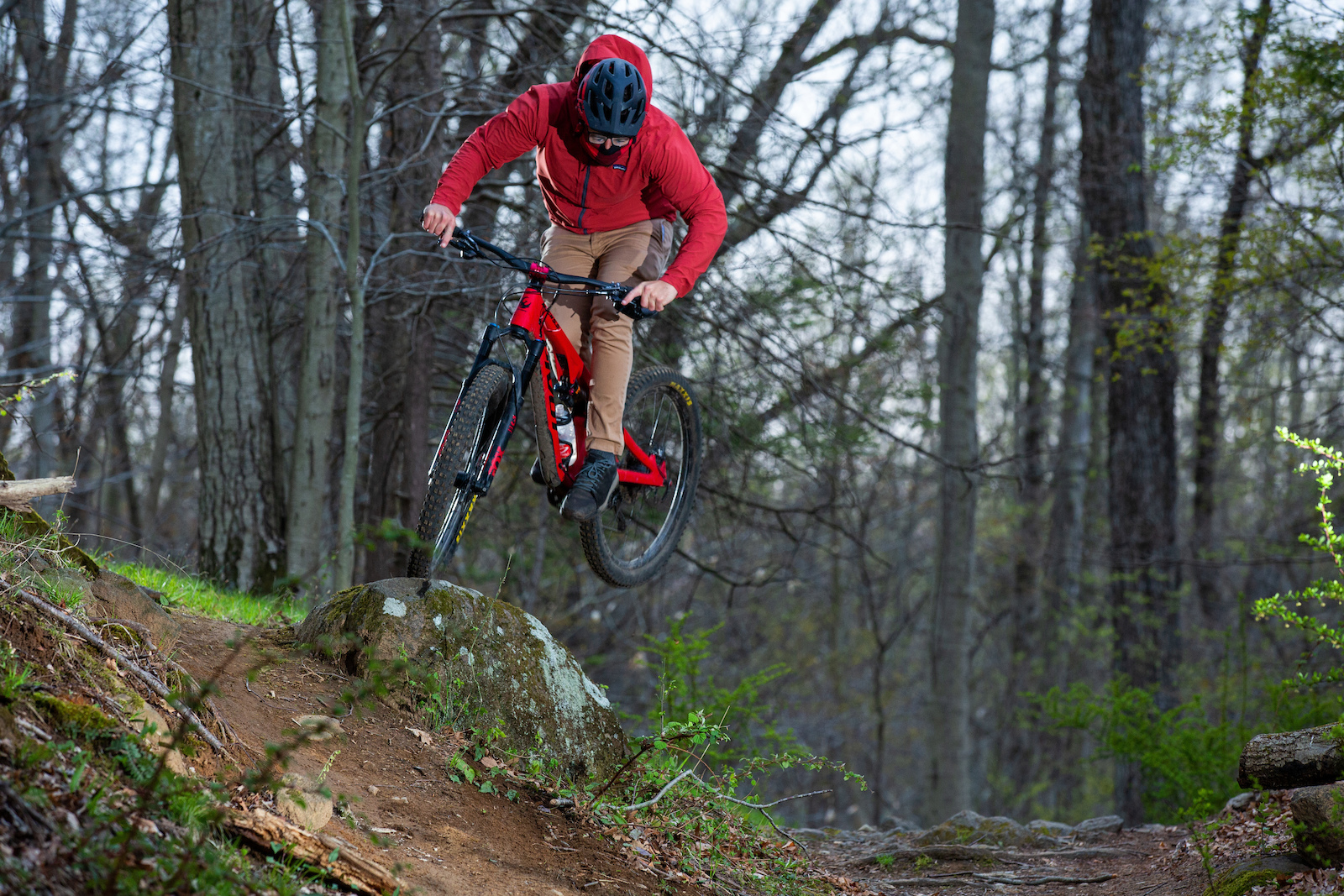 My wife told me that I should have raised my chin a little bit for this shot. I do not disagree.
Living in the the part of New York where the first confirmed case of COVID-19 virus was discovered earlier this year it’s pretty safe to say that things have been pretty weird. As a person who commutes into Manhattan via the same train line as that person(along with millions of others) made it a bit more real. There was an idea that this thing was going to be a bit bigger than anyone was letting on in the early days of it, but now here we are, New York City has been shut down since March 15th, the response and change in culture has been bigger than anyone anticipated with no end in sight. The extra time with my wife and kids has been great, the chance to ride bikes pretty much every day has been a great outlet to allow for some level of normalcy – and all of this extra time. I no longer stress out about time management and maximizing my days. Like many people I feel like I am in a bizarro world, work has dried up, there are only so many rainy day projects to take on. I find myself wasting a lot of time doing nothing, it’s refreshing, but has me afraid of losing focus, so it's time to get creative. 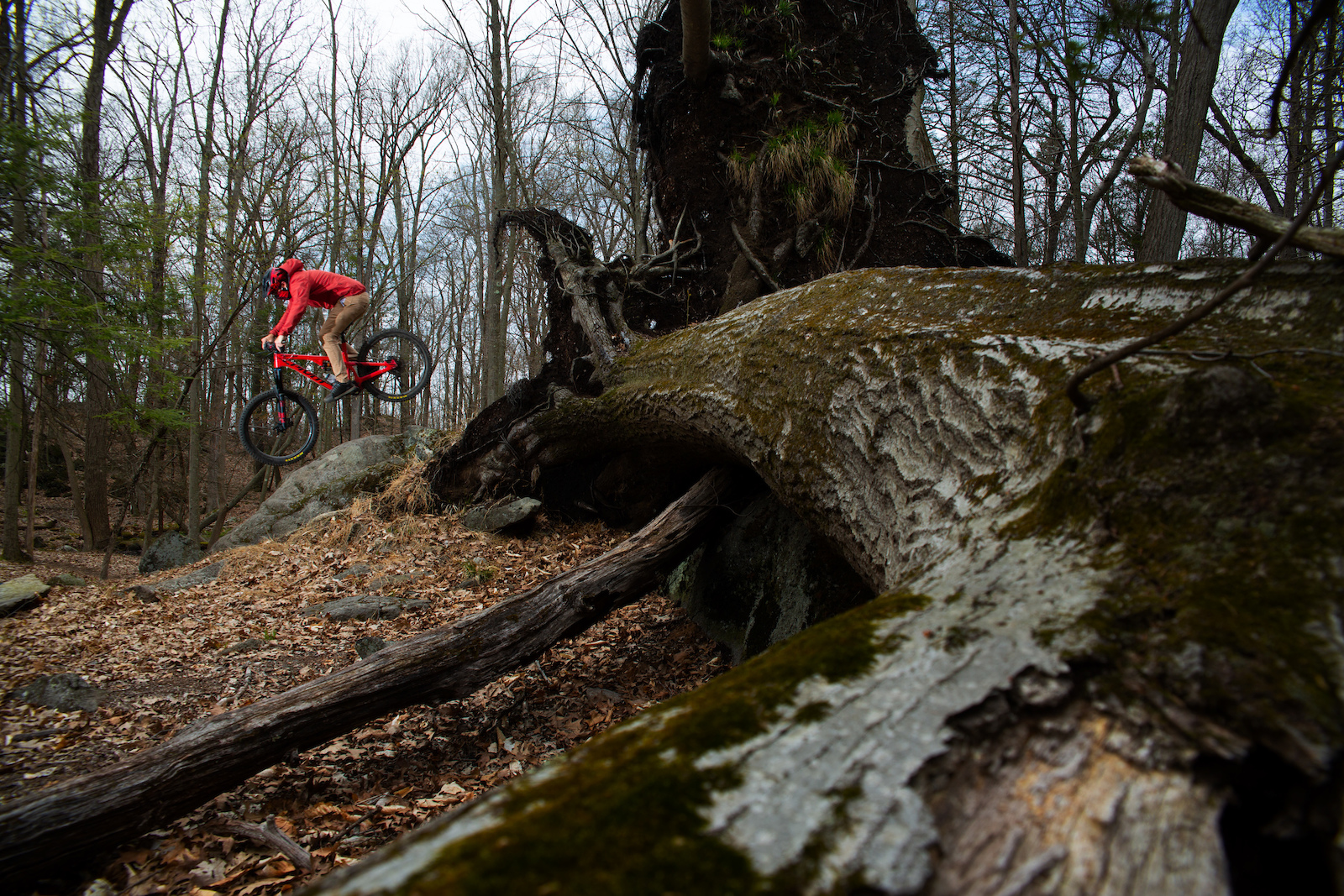 This tree fell about 2 years ago, 10 feet above it is the widow maker it took down with it.
So I assigned myself a project.

Create a collection of good riding photos. By yourself. In the woods. At the magic hours. Light them, shoot via remote trigger.

It took me a few gear tests before I got everything to click. It turned out I needed a couple of extra remotes to make everything work in unison, if I was running AXS things probably would have gone smoother, SRAM, if you're listening, can you program in some PocketWizard frequencies? The second time, there was a 20% chance of rain when I left the parking lot – 45 minutes later, after my lights were set up and everything was nice and spread out – a downpour began… At least I brought a beer with me for the hike back to the car. 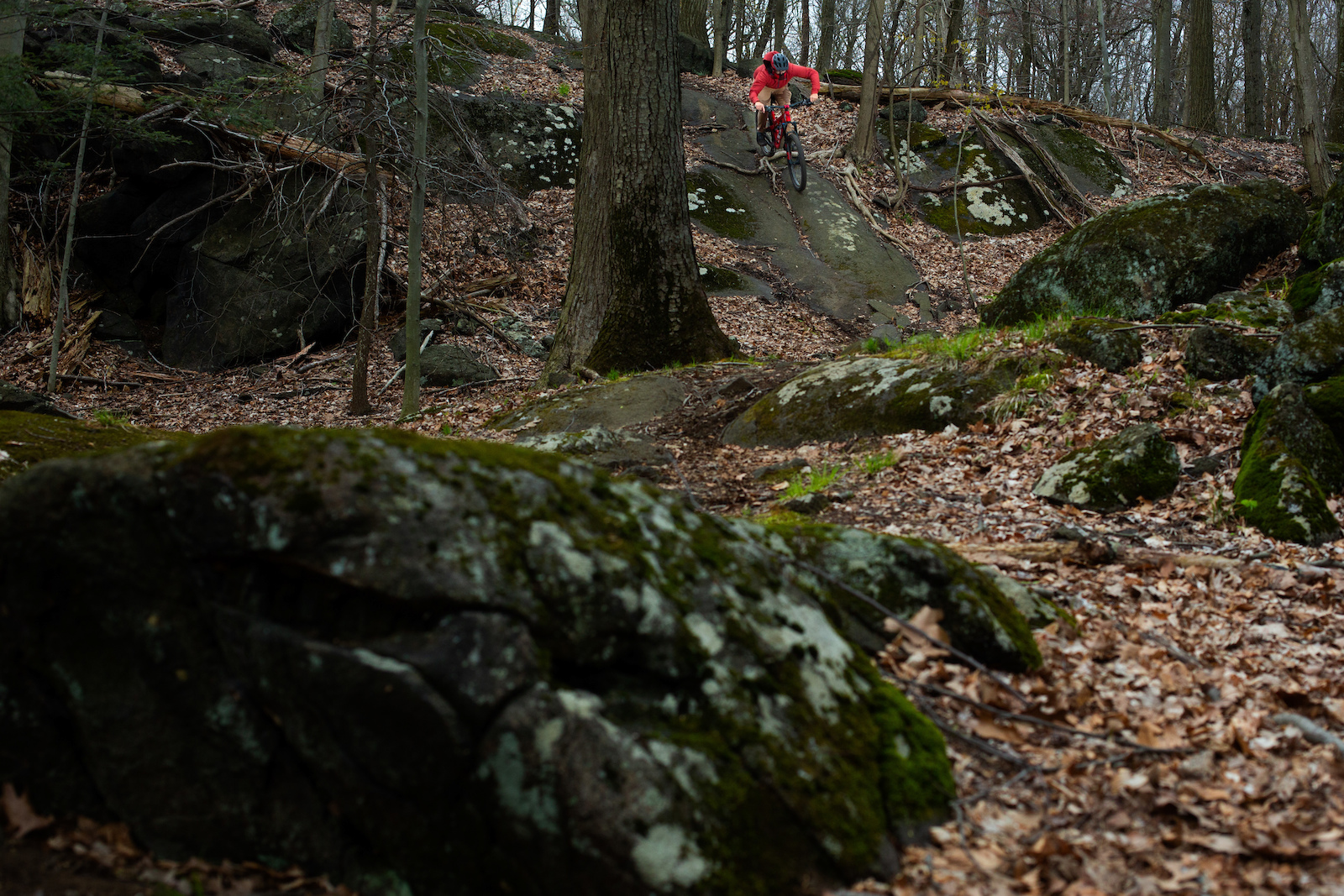 The Hudson Valley is a very unique world, it's under an hour from Manhattan but can live very rurally. It is also a place where glaciers left a bunch of rocks and trash hundreds of millions of years ago.
The third try was a charm, fresh batteries all around, a nice light cloud cover to keep the woods a bit dim, fresh off a cup of coffee at 6am, I got my first shot dialed in and done. I have shot with remote flashes plenty, but never a remote camera that I had to trigger at just the right moment by jamming my thumb into a button and hoping for the best. This was a new thing to learn and the curve was steep. After getting the first shot dialed, I went on and things went smoothly. I’ve been building a shot list in my head of cool stuff in the trails for months, finally, I had the chance to execute.

If you had asked me 2 months ago what I was planning on doing this April, it wouldn’t have been much. My winter travel was all wrapped up in early March, work is typically busy and life is hectic through Spring time, I would still carve out some early morning rides and hopefully plan a weekend somewhere in June. 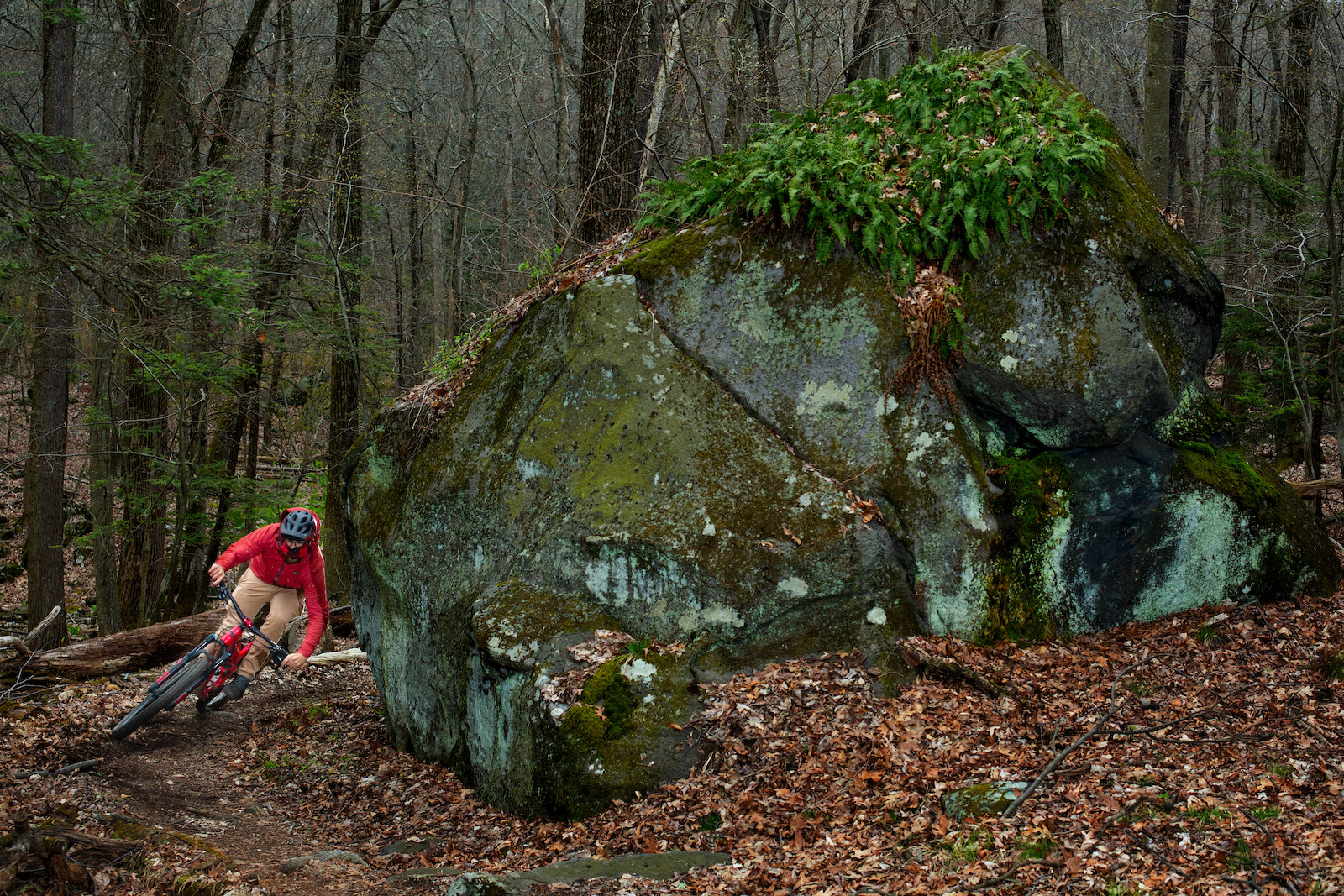 Alone in the woods. It's the place to be right now.

Instead we are self isolating, socially distancing, wearing masks, trying to avoid most human contact and not leaving the local area for an undefined amount of time. I feel bad for calling myself one of the lucky ones – out of work for an indefinite amount of time, but not really suffering. Life has improved for me and I have gotten to enjoy this leisurely lifestyle. I know that soon, it too will pass.

Times are weird, but we will get through this. Patience is necessary, trusting and knowing that things will get back to normal eventually is a good mindset to stay in. Taking less risks than normal as to not be a burden on our first responders is a must. A big shout out to the front line in the hospitals and everyone who is still working to help keep the world turning, without you, the rest of us would be screwed. Also a big shout out to my local shop Yorktown Cycles and all of the other shops out there that are working through these tough times, getting new people onto bikes, keeping everyone else rolling and getting creative with drop off/pickup services to help keep everyone safe. 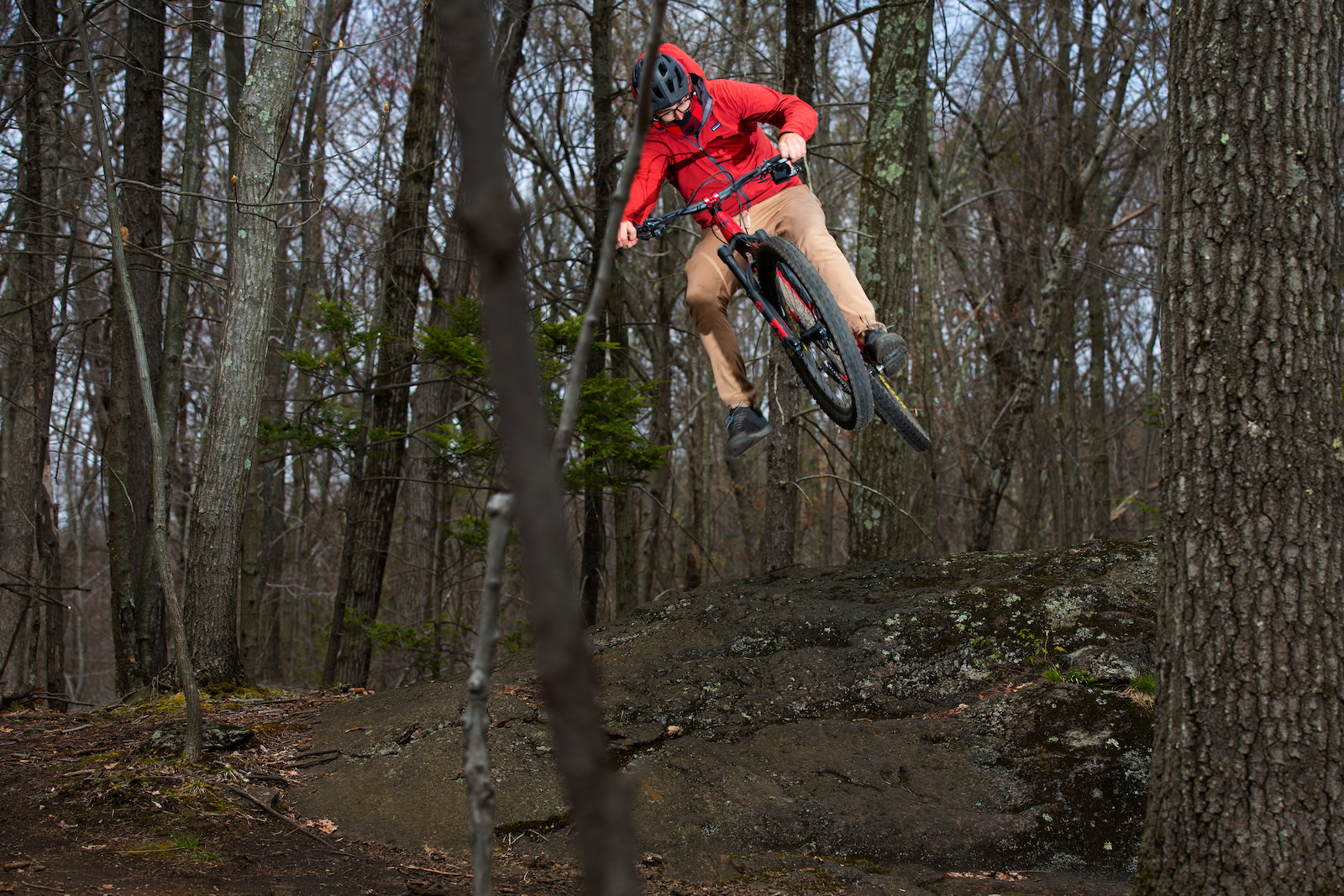 This was the spot I was most excited to shoot and do a steezy table. Instead I stomped out a fire and then quickly stop dropped and rolled. There are decent frames, but this one most accurately shows the difficulty in holding on while squeezing a remote in your left hand.
Just because work is put on hold for now doesn’t mean that the rest of life has to be. For some of us this can be the Summer of George. 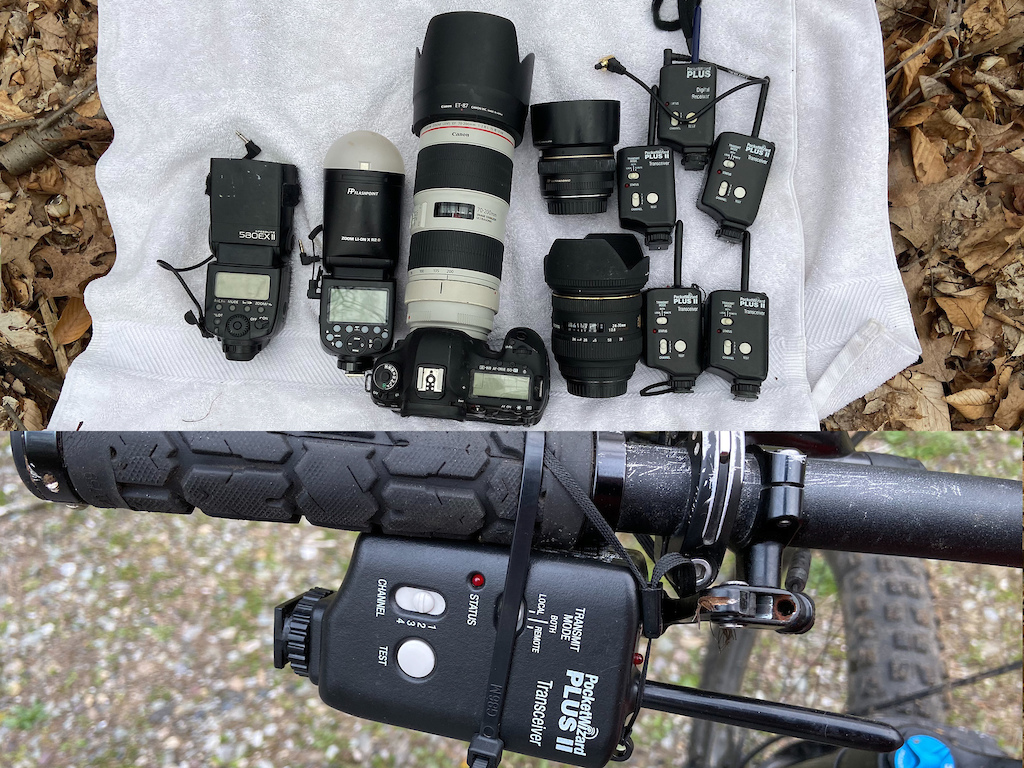 
About the Photographer
Patrick is a corporate photographer in NYC and has been a weekend warrior spending a disproportionate amount of free time riding bikes for the past 25 years. Though he rarely photographs anything bike related nowadays, he still likes to mix it in from time to time. He prefers Steel Reserve to fancy IPA's and endorses the use of pineapple on pizza.