September, the best time to ride!

Oct 8, 2010 at 22:06
by Jonny Coté
Share
Tweet
48 Comments
My goal for September was to ride my bike everyday. I've wanted to do that for a while now, but it's not that easy when you are working full time. The goal was to get in really good shape while having fun, as I can't stand going at the gym and pedaling on a bike that goes nowhere. It would take both of my bikes and all of my good friends to make it happen, but I was going to ride a LOT in September, or Epictember as I remember it now.

Read on,Maybe I should start by introducing myself as most people here don't know me. I'm Jonathan (but all my friends call me Jonny) and I'm from Québec city, but have been living in BC for about 4 years now. Being a snowboard freak I was supposed to come to BC for one winter ha ha, classic story I know, but I'm going to stay forever. I live in Kelowna, BC, where there's tons of good riding. I started riding during the summer of 2006 and have been hooked ever since.

Back to Epictember... here are the bikes that I've been riding on, first my 2008 Santa Cruz Bullit, setup fairly light at 33.8 pounds. That's pretty good for a 7" freeride bike. With a 32 tooth single chainring and a 11-34 cassette, it still climbs pretty good too. 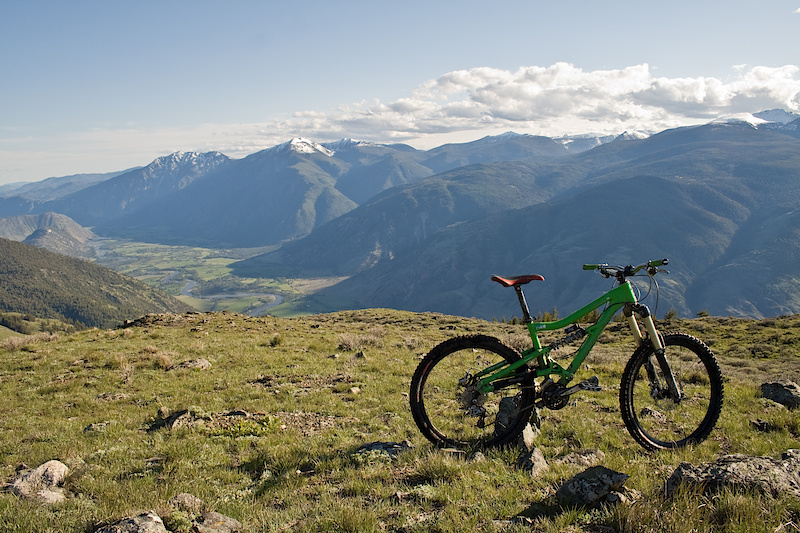 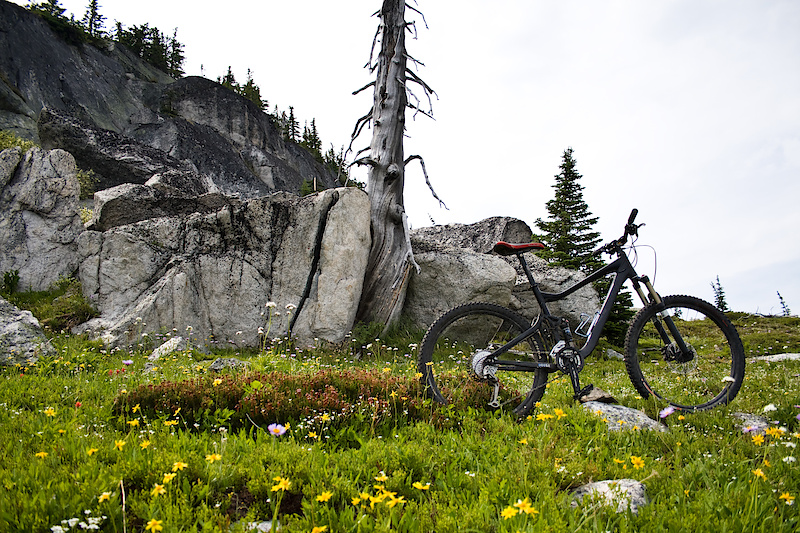 2008 Giant Trance X that I just bought this year.
Let's start at the beginning with September 1st, it's the Wednesday night toonie ride at Smith Creek with the mountain bike club (www.mtbco.ca). This is where I will be riding every second Wednesday night of the month. For 2$ you get a beer and a burger after the "xc race". Smith creek has to be the flowiest trail in the area, I'm glad that it's a pedal up because it would be blowing out by now if you could do shuttles. The next day I went riding by myself on PCB, a trail that I built in my front yard during the summer, it's not finished yet, but the lower half is good to go. It's a brake burner on a steep ridgeline through old growth forest, only 5 minutes down for now, but about an hour climbing up on the big bike. Friday night we shuttled Vapour at Crawford, it's my favorite trail in Kelowna. Vapour is a good 1/2 hr downhill from the top and a good mix of flow and rocks. I know the trail pretty damn well as I was training on it last year for the Super-D race organized by the local mtb club, I ended up in 3rd place last year and 5th place this year, not bad for a race with more than 80 riders. 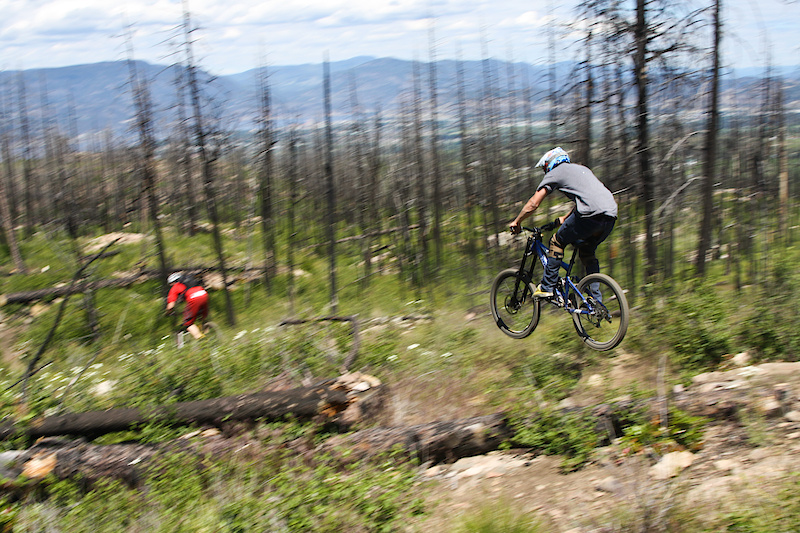 Vapour
Yeah finally a weekend and a good friend of mine came up from Victoria. Saturday we rode Vernon, Big Ed and Spankys, two long trails with some good vert. Starting with Big Ed, good loamy turns with a few steeps and you end up by the beach on Kalmalka lake. It's gotta be one of the best viewpoints in the north Okanagan. Spankys goes from Silverstar mtn resort right back to town if you want, we got caught in the rain, but it was still a good ride. 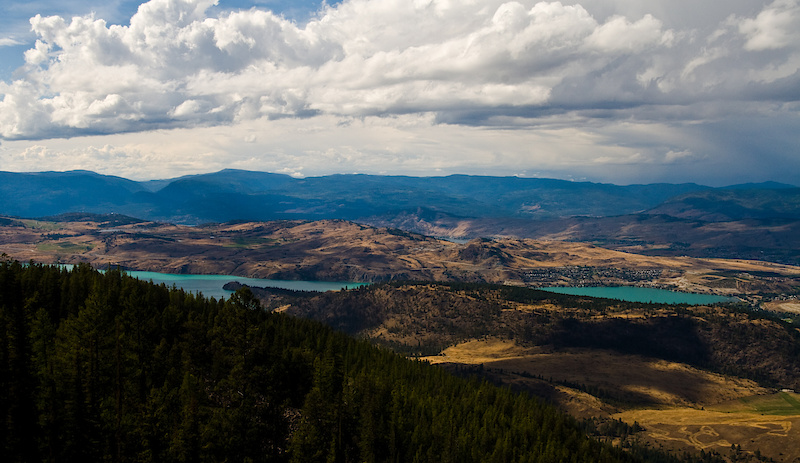 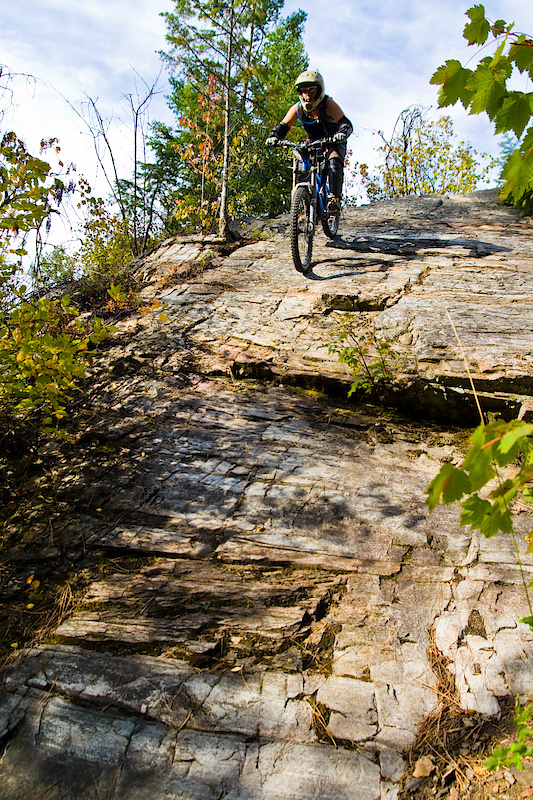 Sheila on a steep rock face in Vernon
Sunday we were off to Merritt, it's about an hour away and it probably the best place for a day trip with plenty of loam and steeps to rip. 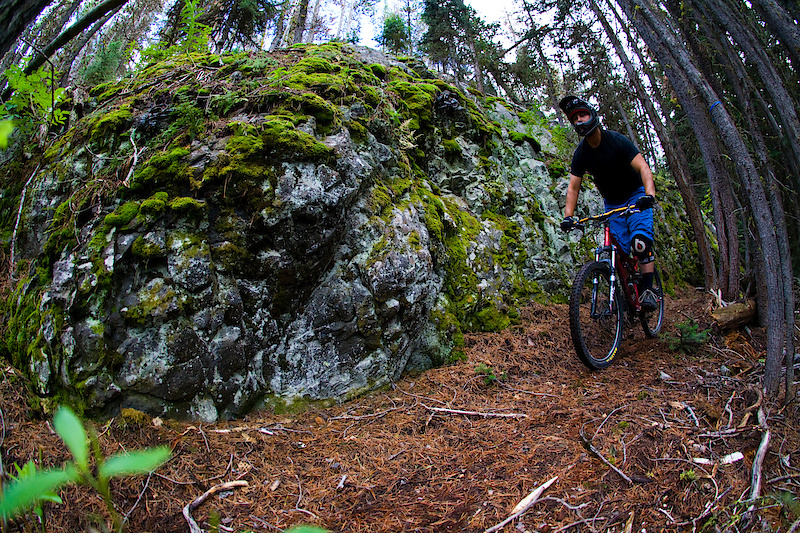 I know Brant likes loam, but who doesn't? 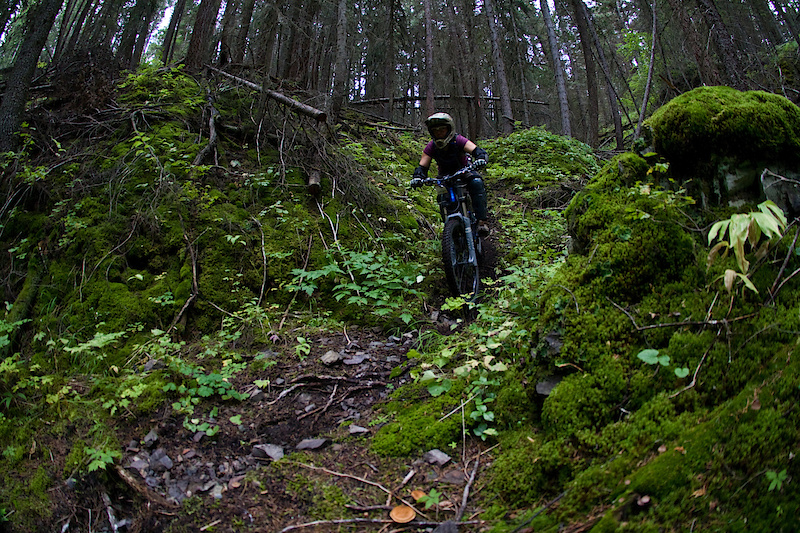 I can't believe it's so green in one of the driest parts of Canada. 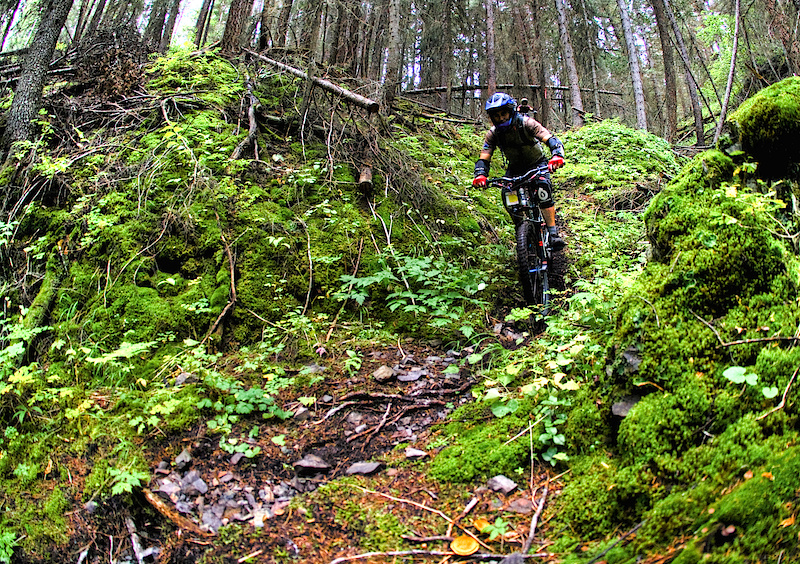 Being the September long weekend, we got Monday off! Shitload of vert that day for just one trail, over 6000' of vertical descent. Who knew we had big mountains in Kelowna, yes we do. I guess summer was on the way out as it snowed the night before: 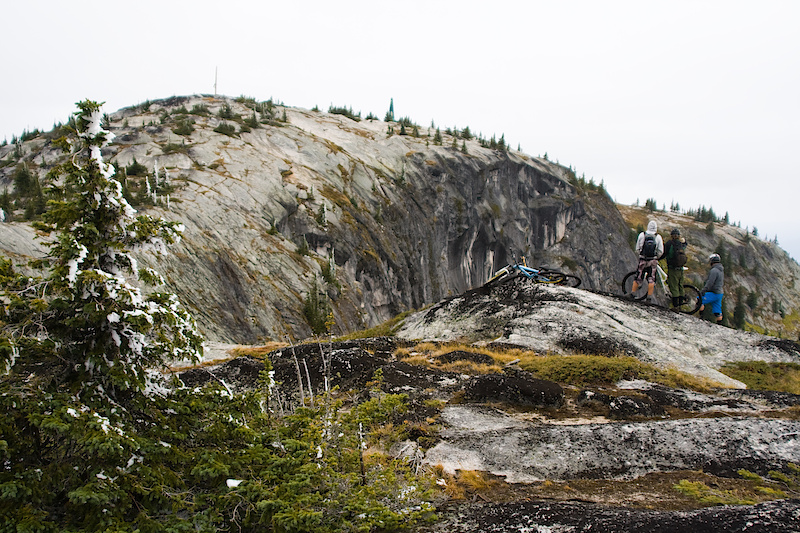 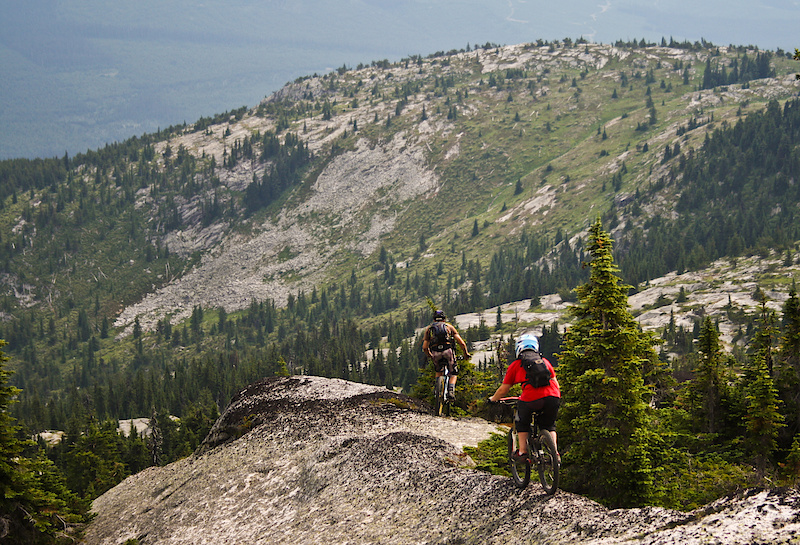 Here's Andrew and Greasy John at 2200 m above sea level on top of Little White
4 hours later, we were riding on an old hiking trail that had been destroyed by the big forest fire of 2003. Trees are covered with fire retardant, looks quite weird in there. 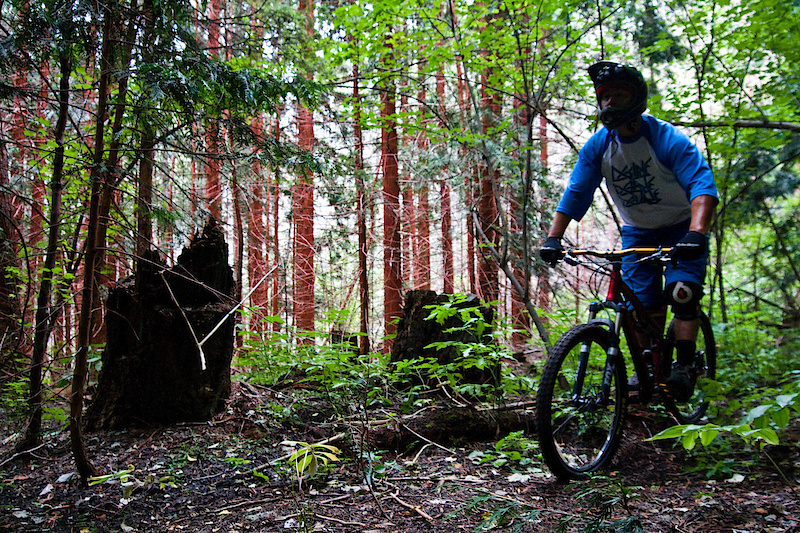 Second week:
Now back to work, tired after a long weekend. Tuesday night I rode by myself on PCB in the dark, in the rain with the Magicshine. No big deal, my roomate knew where I was - lol! Next day was an xc ride up to my favorite trail Vapour. Thursday night at Gillard with the guys from Union Cycle. Now that Silverstar was over with the extended Wednesday nights it was time to get the tradition going again. Locals usually get together every Thursday night to shuttle the hell out of Gillard, the biggest freeride trail network in the valley. No need for introduction, as you have all seen it in the movies (Roam, Barred for life, NWD and many more). Friday already and I had some good plans for the weekend. I'm left from work and headed to meet a friend in Salmon Arm. Me and Chris got to do a good ride before dark. 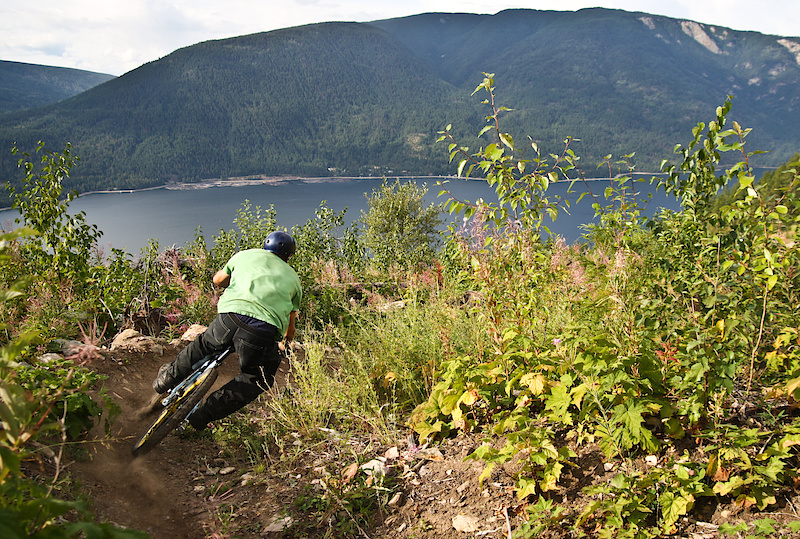 Can't remember the name of the trail, but it has so much flow that it puts Silverstar to shame. Just like the bike park, but singletrack without the crowd and brake bumps.
We got up early Saturday morning in Kamloops and went for a quick rip on Rio before meeting the rest of the crew at Sun Peaks. It rained over night, but was nice and sunny by the time we got there, couldn't ask for any better. Good day at the park and we hit Rio again on the way back home. Sunday we hooked up with Johnny Smoke from Bush Pilot Biking for a day trip in south Okanagan. 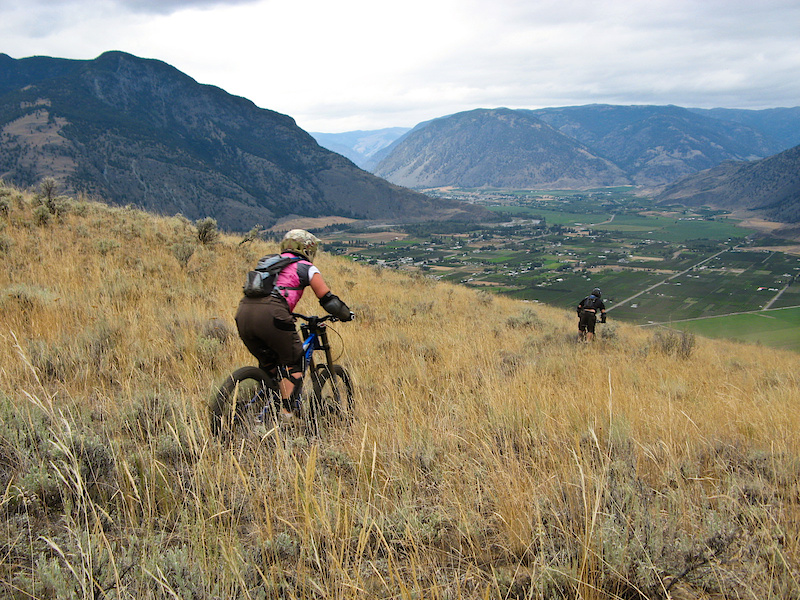 Smoke is the man, doesn't matter where you go he knows where the good stuff is. 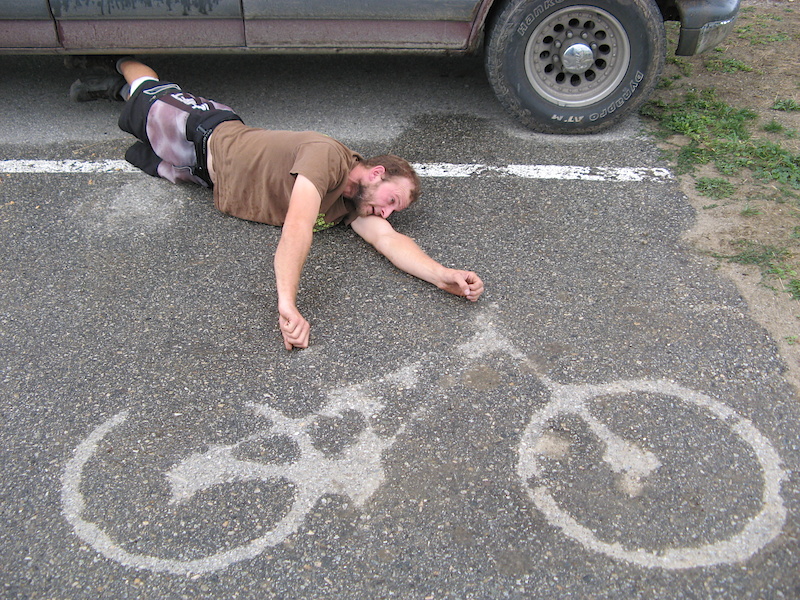 Third week:
Already halfway through September, this week was a good mix of PCB, Toonie ride and Gillard. Now the weekend was really poor weather like you almost never see in the Okanagan, rained almost all day Saturday, but I still went out to Crawford after the rain stopped. Sunday I decided to go to Silverstar for their last day of the season, I had to because I had a free pass that I wanted to use and it was going to be my first time at the local bike park this year. Of course it was wet and cold, but I still had fun ripping with Mark on his hardtail.


Fourth week:
I had a buddy out from the Kootenays, so I showed him around all week. It was good training as he only rides XC, we started Monday at Crawford to go ride Vapour again, the classic trail in Kelowna and everyone likes it. Next 2 days were spent riding on Knox mountain near downtown, where most people ride in the winter because of its low elevation. 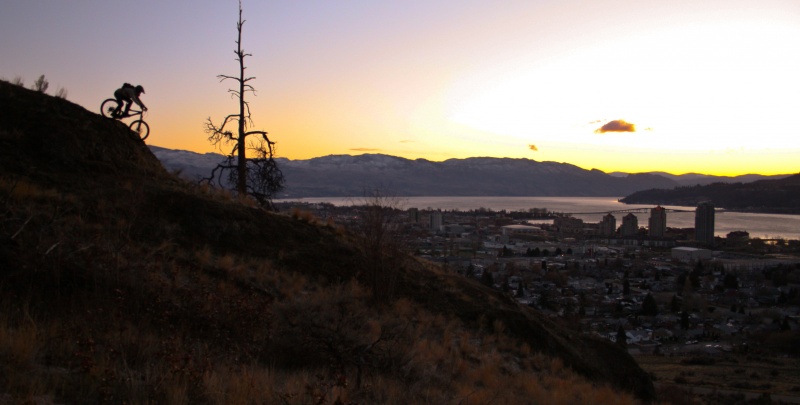 Knox is short, but really good, XC or DH there are trails for everyone.
I was supposed to go ride Keystone in Revelstoke on the weekend with my new friend, but it snowed and the trail was covered. Plans changed and I stayed in town all weekend to do some building/trail maintenance and riding at Gillard. It was already the end of the month, one last Toonie ride, summer is officially over now, but it feels like it just came back for a few more days as it was around 22-25 degrees that whole week. Went exploring in my back yard since I've only been staying here for a few months. Landlord told me that there was a lot of trails back there and I found some good singletrack that are perfect for xc loops. September 30th was the Thursday night ride at Gillard, it's getting dark early now, but I brought the light and did a good lap with Dale. I guess September is over, but Im not done yet. Postill after work on Friday since it's only a 5 min drive from work. October now and it's warm, Saturday morning and it's a spontaneous day trip, we're off the Revelstoke for the ride I was suppose to do the weekend before, oh yeah the snow is all gone at high elevation. 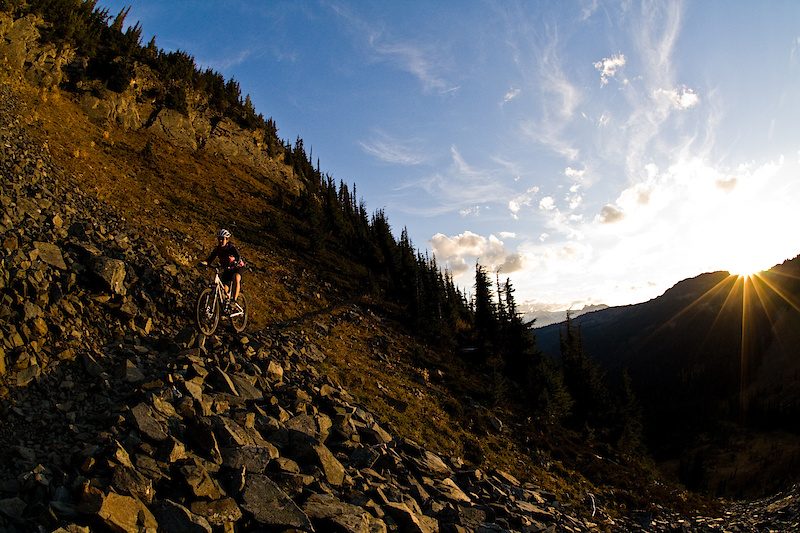 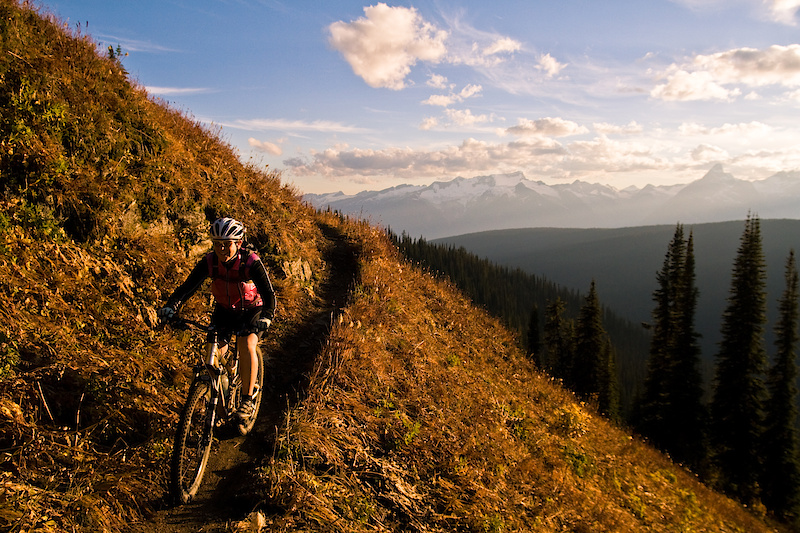 Right on top of the mountain, Sheila told me it was the right choice to move to BC from Ontario 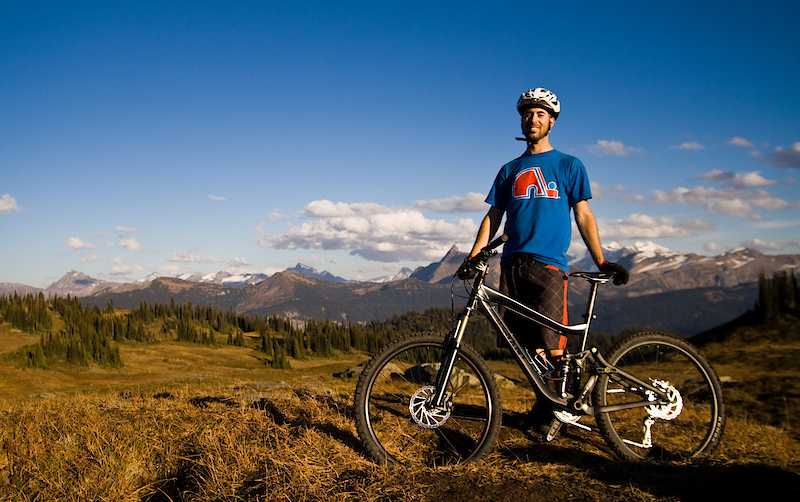 Here I am, all happy!
I ended up riding for 35 days in a row and I think that I deserve a good rest, now bring on the snow as I'm ready for a good winter with plenty of pow.

ianmctimoney (Oct 9, 2010 at 7:36)
nice jonny, i think you probably ride more than anyone i know. well done on 35 solid.BC is definetly the place for you.

jansenschouten (Oct 15, 2010 at 7:02)
I rode Keystone a few years ago in the summer, totally blew my mind....it's one of those trails you have to ride once in your life, same as Seven Summits

grandmastere (Oct 28, 2010 at 16:24)
I'd rather have excellent public spaces and health care and arts programs than watch a bunch of frenchmen choke in short-track speed skating. E.

russclark (Oct 15, 2010 at 0:21)
I really like this. Epictember is by far my favourite month, too! Really enjoyed reading it

smoke (Oct 15, 2010 at 6:51)
Thanks for the link! The only excuse you have for missing the Similkameen ride is Keystone. Nice work.