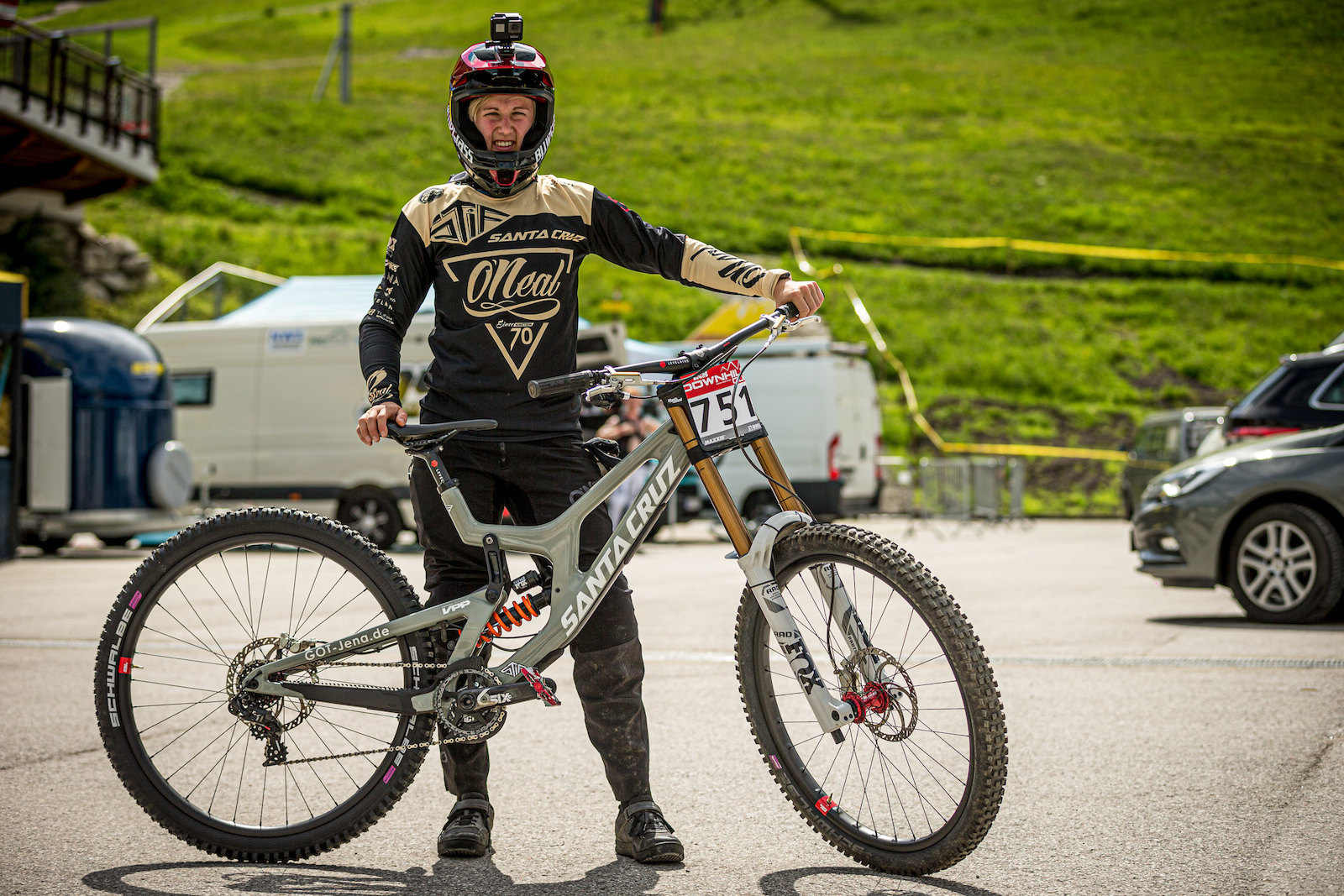 BIKE CHECK
Nina Hoffmann's
Santa Cruz V10
Photography by Leopold Hermann
After her successful 2019 campaign as a privateer that saw her finish fourth in the overall World Cup ranking while even being injured during the final stages of the season, everyone was expecting Nina Hoffmann to join a factory team for 2020.

Instead, she chose to tackle the racing season with her own UCI team, allowing her some more flexibility in her choice of sponsors and independence in general. Stif, the UK distributor for Santa Cruz bicycles is acting as her main sponsor, adding Reserve wheels to her Santa Cruz and Juliana frame deal.

Nina is also involved in prototype testing at Levelnine. With her current setup, she’s in detail giving feedback on the differences between the new 35mm clamp and her regular 31.8mm setup. Interestingly, to her, the wider clamp offers minimally better damping. 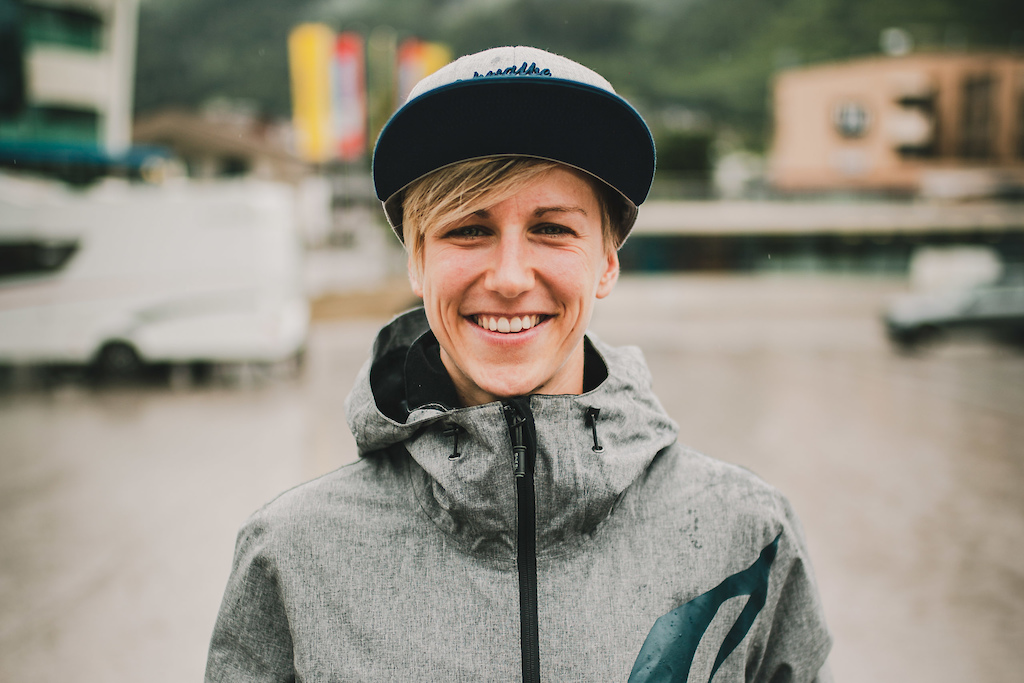 Nina Hoffmann // Nina Hoffmann Racing - Stif
Age: 23
Hometown: Jena, Germany
Height: 172 cm/5'8"
Weight: 68kg/149lbs.
Instagram: @nina.hfm96
Having worked on a base setup with Fox in Lousa, Hoffmann added another five percent of air pressure to her fork and stepped up to a stiffer spring in the rear after some additional testing. The added support helped her to feel more secure on the bike. Also, she’s running a quicker rebound setting compared to last season, allowing her to ride the bike more actively. 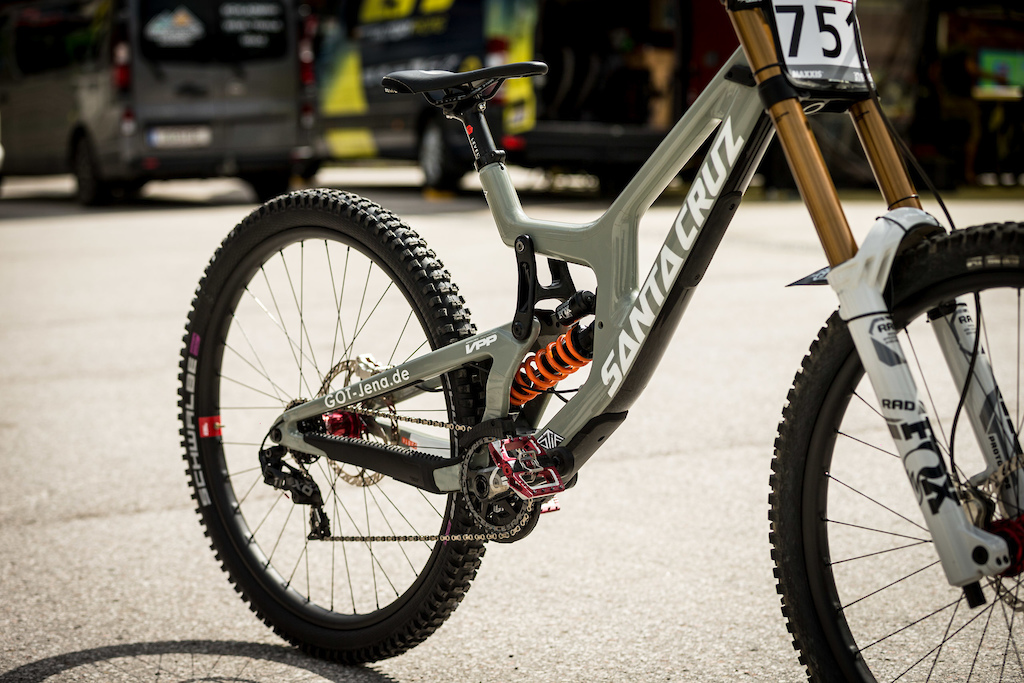 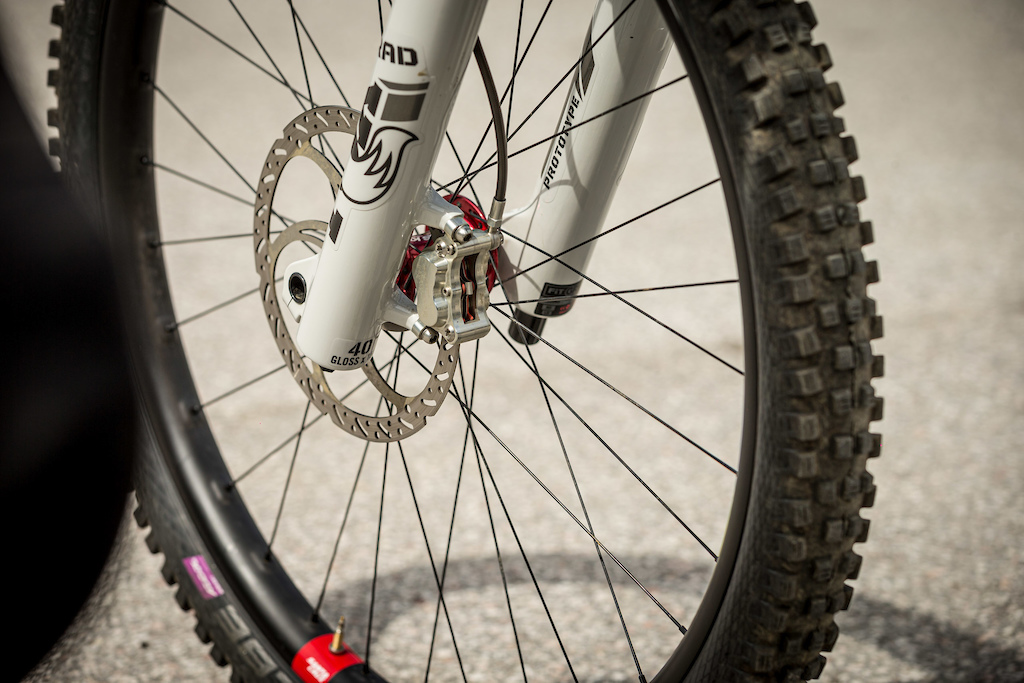 Five percent more air pressure for this season in the Fox 49 RAD fork with three tokens, sitting at 82psi now. 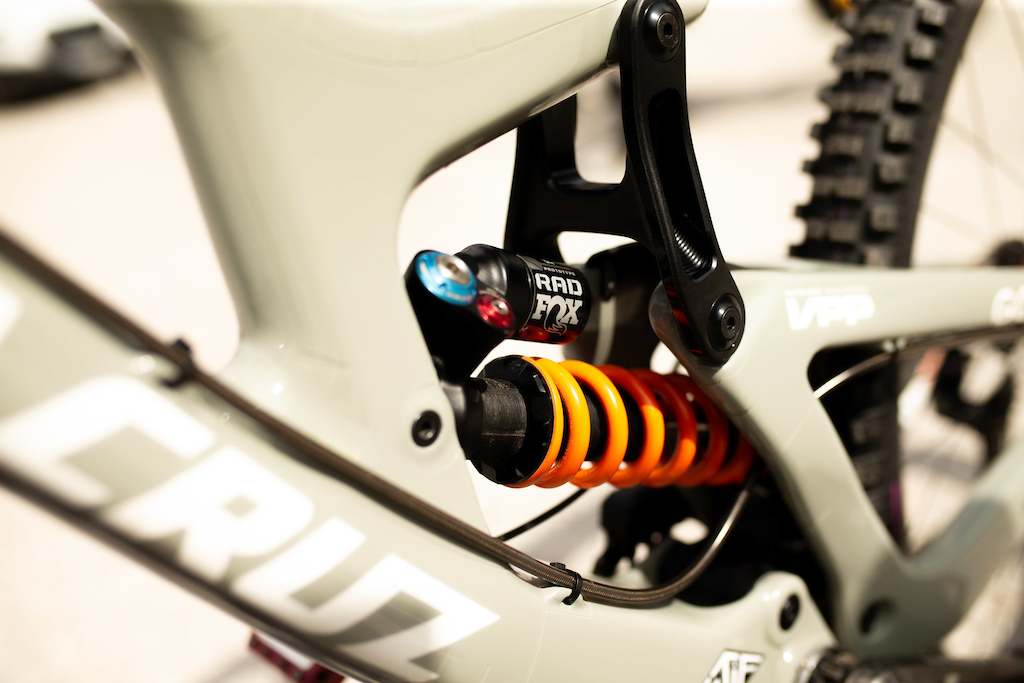 Stiffer 475 spring and a quicker rebound setting for this year’s setup. 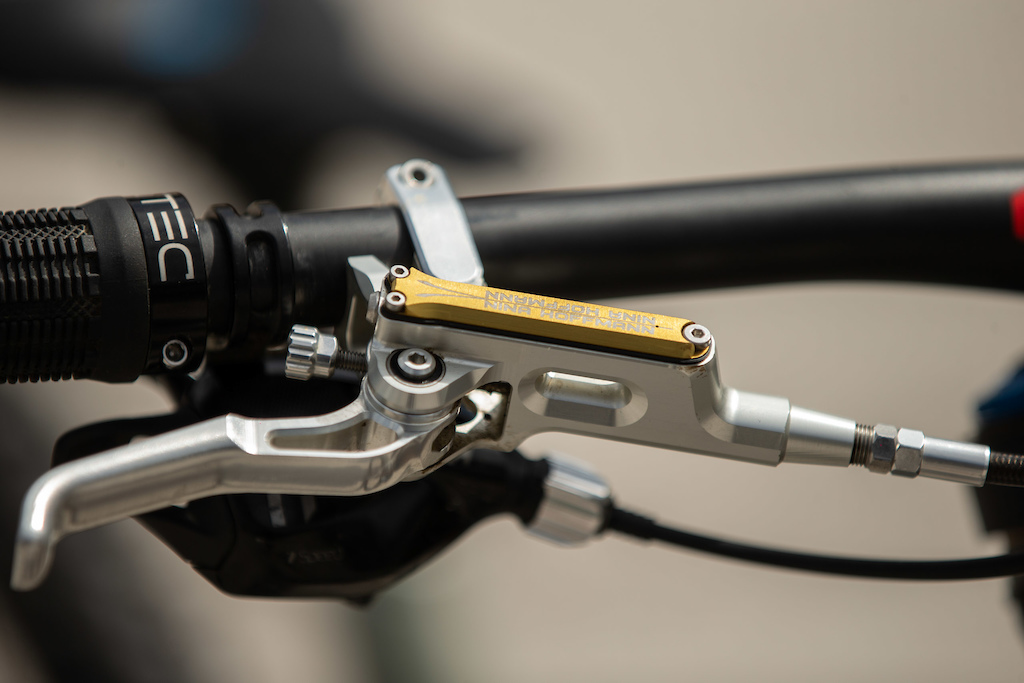 Nina got the custom Trickstuff Maxima at Worlds last year but wasn’t able to ride them since she had to cut her season short due to a shoulder injury. 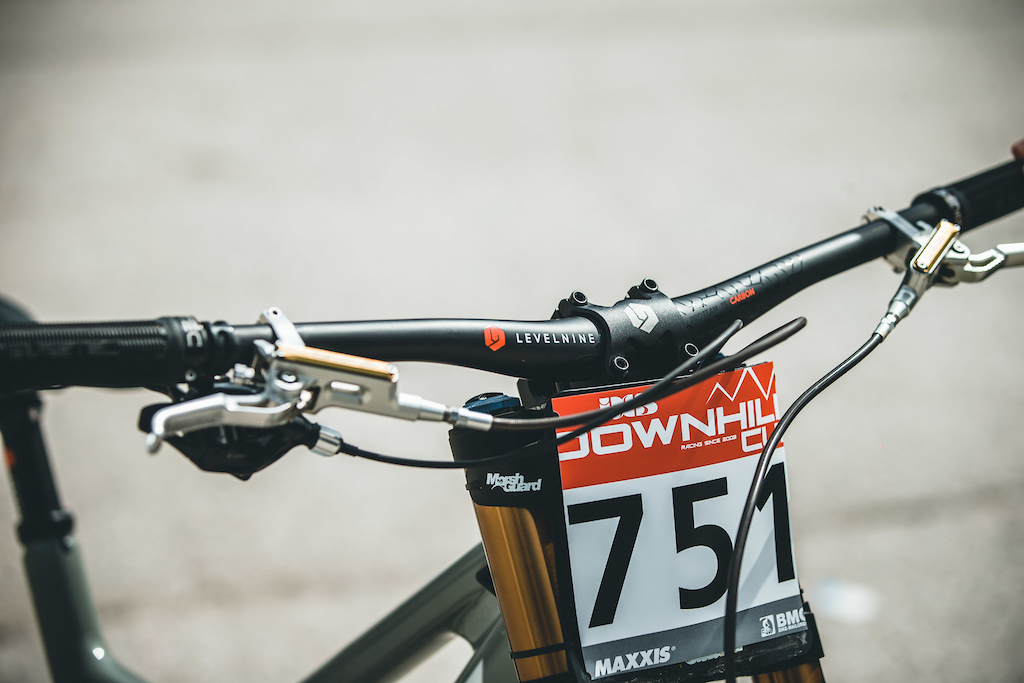 The Levelnine bar and stem that she’s riding are still in their late prototype stage. New is the 35mm clamp size. 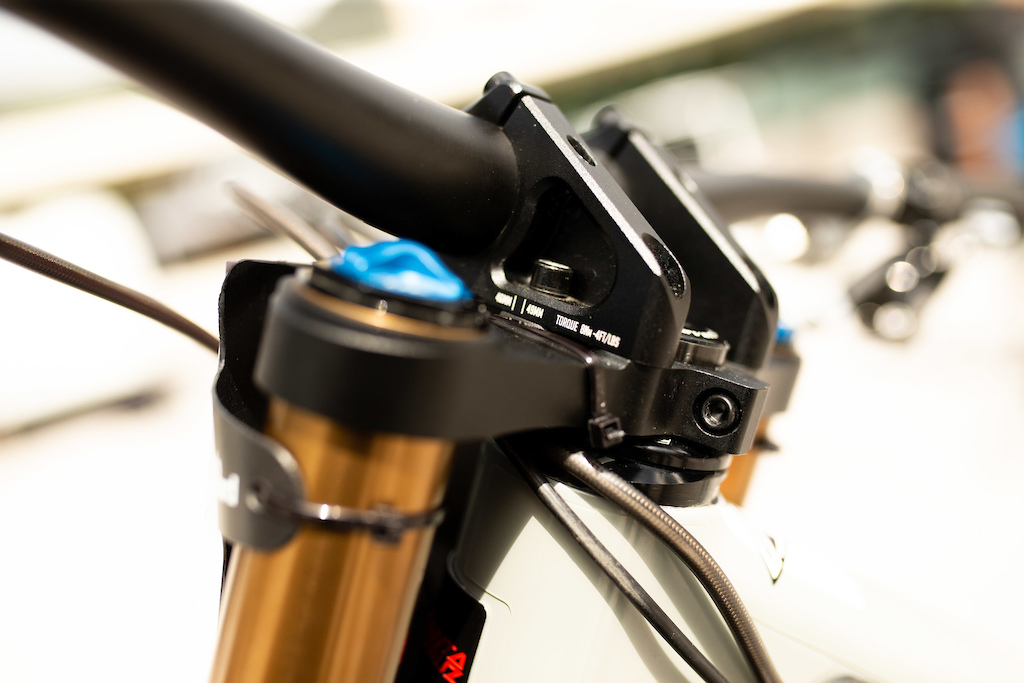 Nina is using the 49mm long setting but she could also bring it down to 46mm. Preferring a low cockpit, the new stem is not exactly to her liking but at steeper tracks like Schladming, it’s not a bad choice. 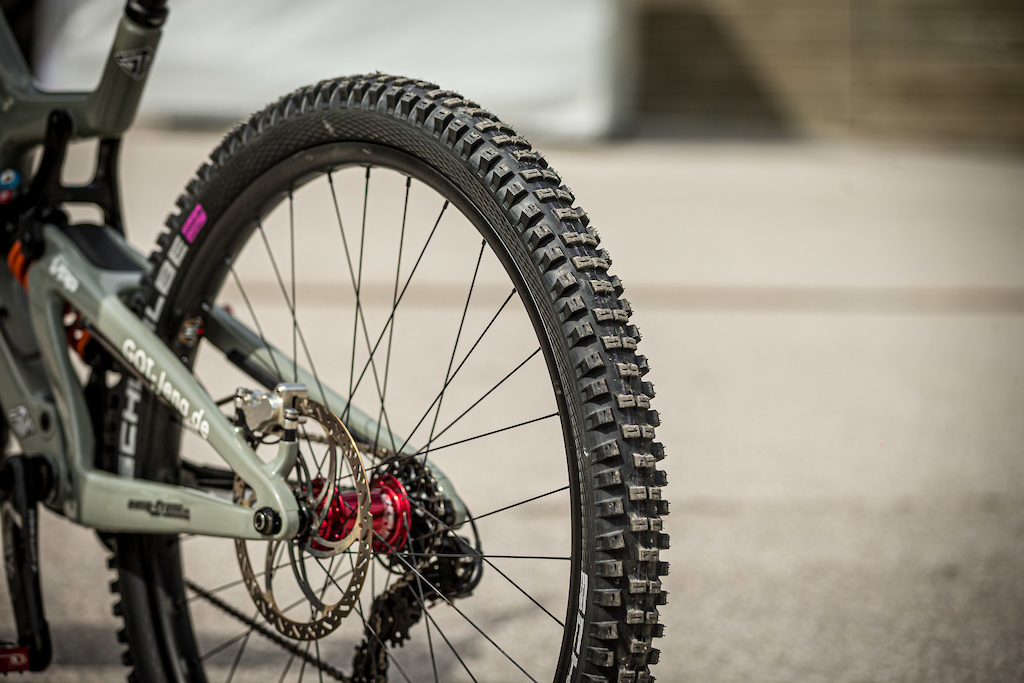 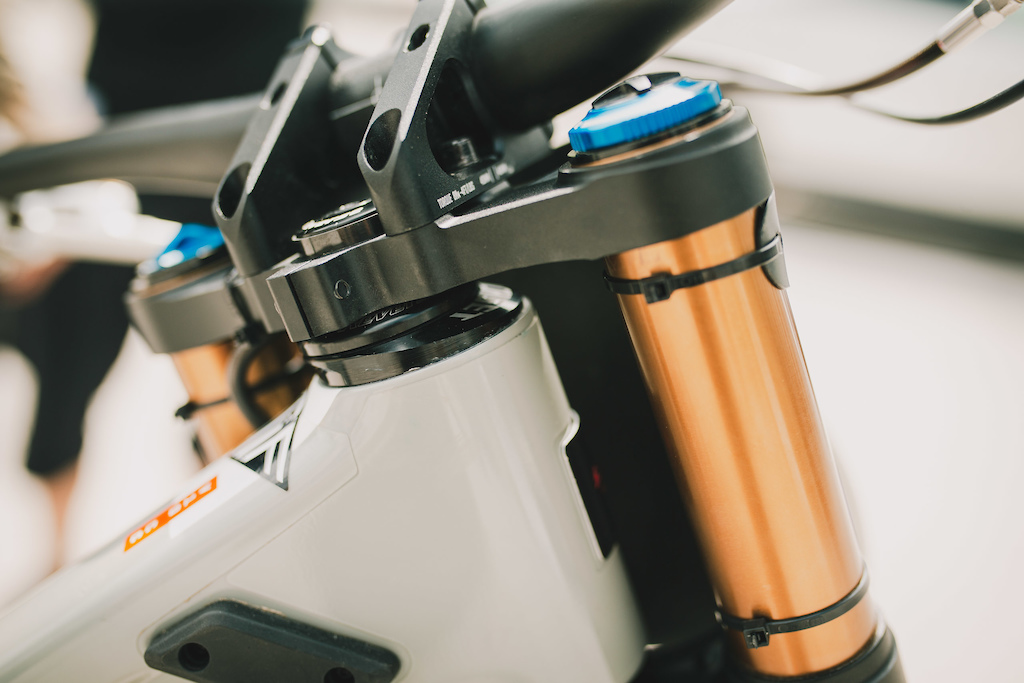 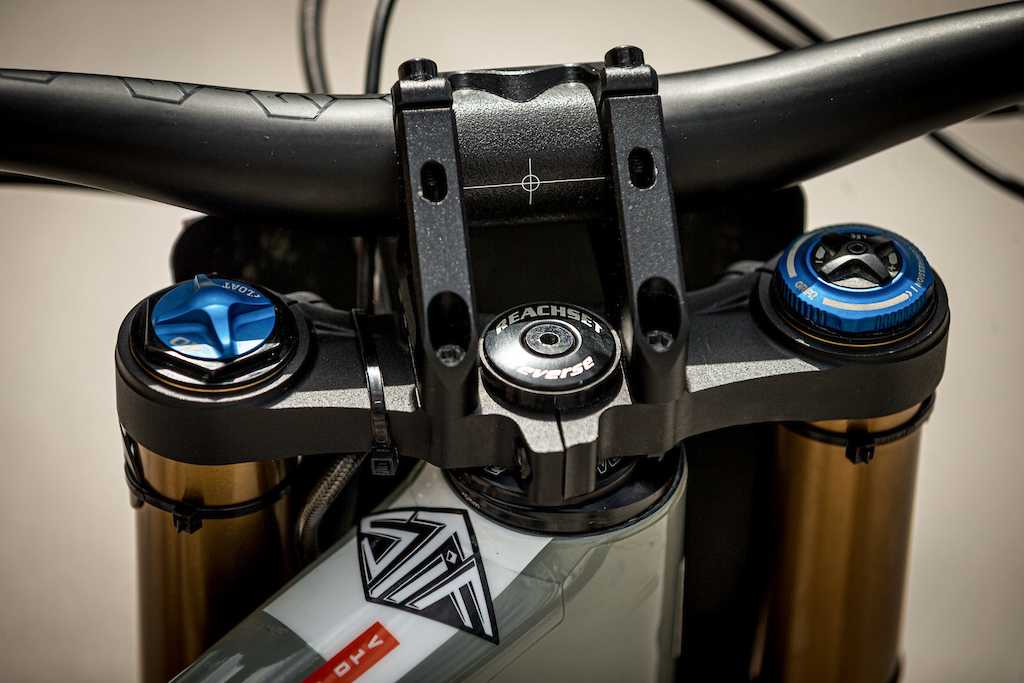 Nina is running a size large frame with a Reverse Reachset, shortening the reach by 6mm. 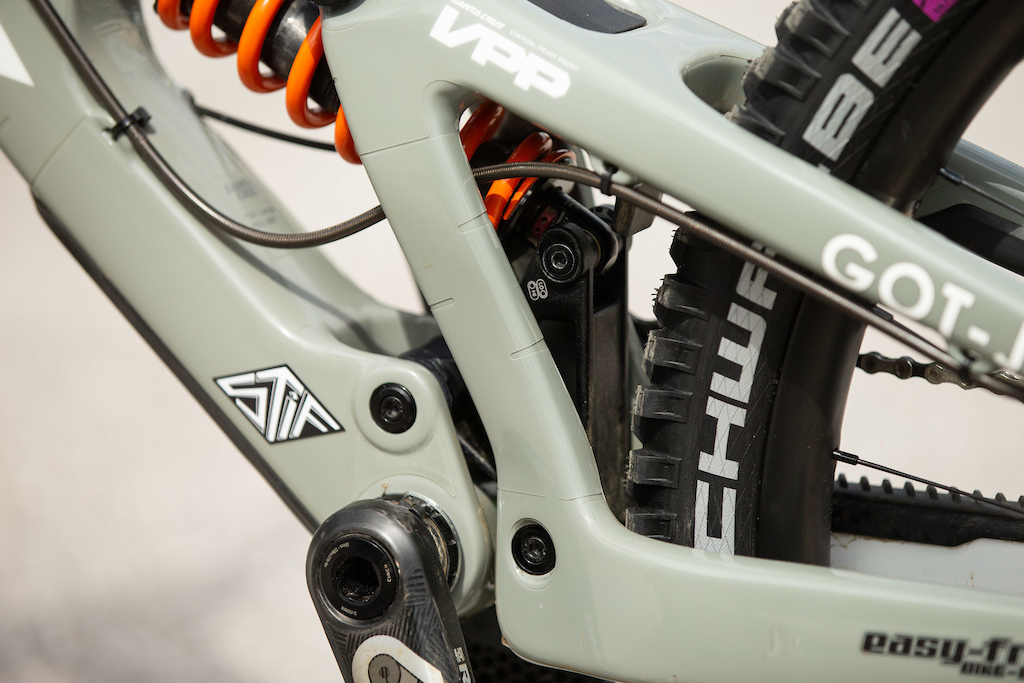 Nina’s base setup is running the geometry adjust on the low setting in combination with a shorter chainstay length. 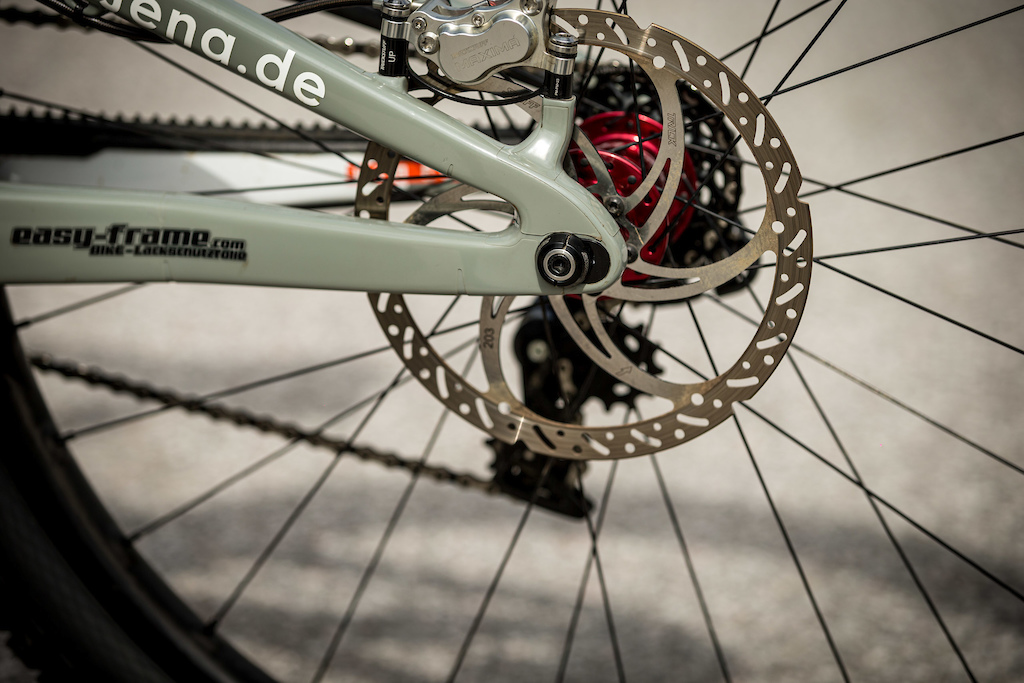 On tracks like Fort Williams or Mont-Sainte-Anne she thinks the longer chainstay will be the better option, although then she’s going to lift the bottom bracket with the flip chip, also turning the head angle slightly steeper to get it around corners better. 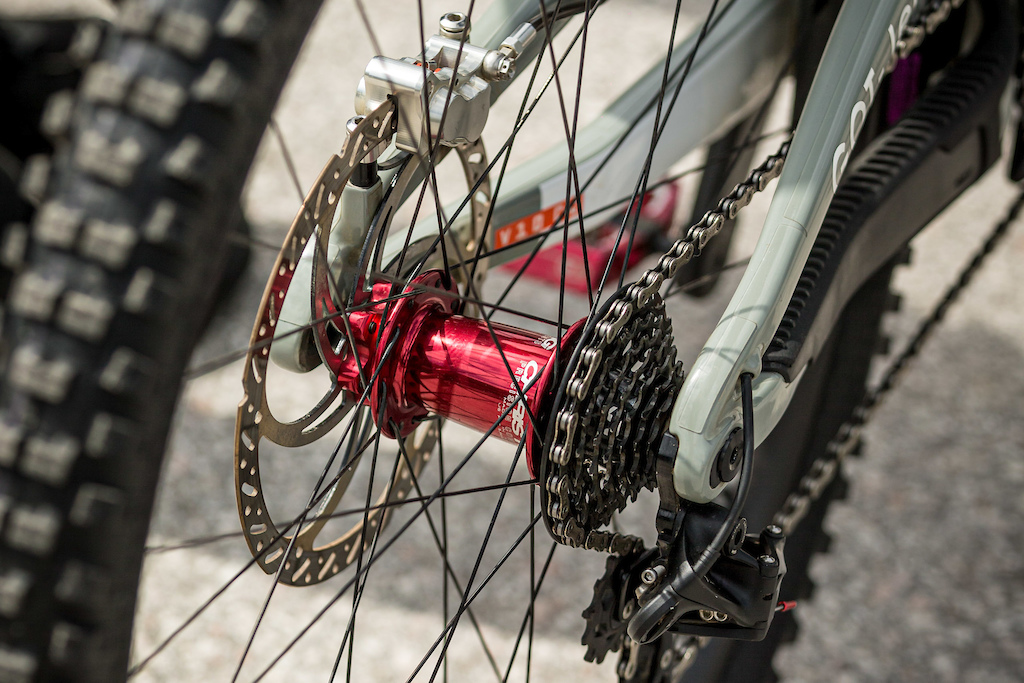 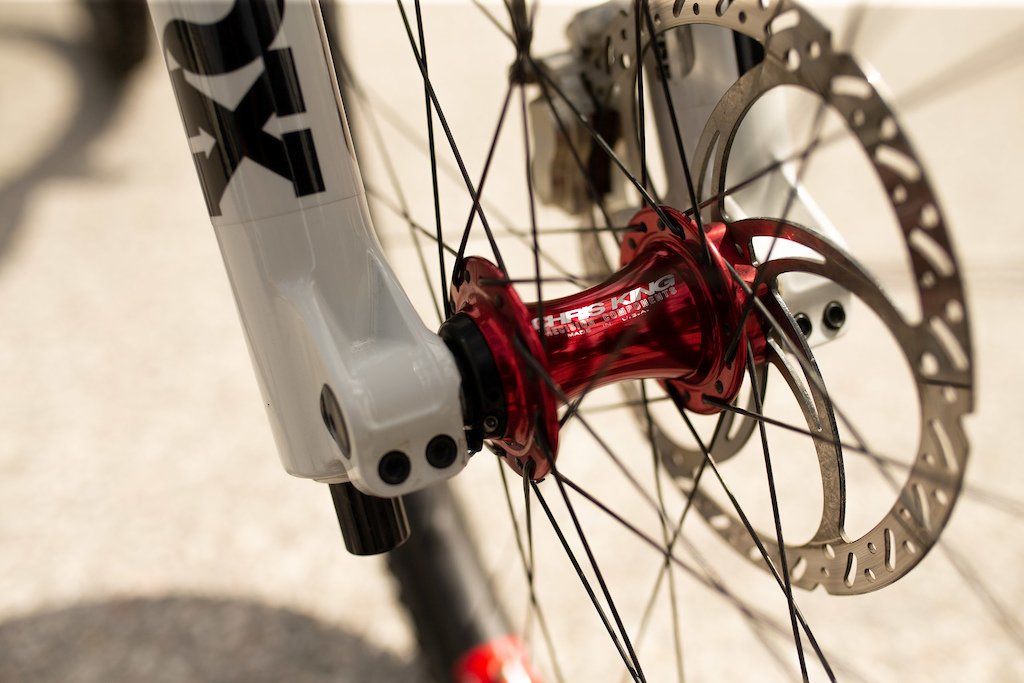 edeltoaster (Jul 7, 2020 at 0:27)
Stoked to follow the rapid progression of such a charismatic athlete. You made me watch Downhill. Go Nina! :-)

Also congrats on the success!

NinetySixBikes (Jul 7, 2020 at 2:59)
Because her results from previous season are erratic at best.
I love her personality and found a new appreciation for her after hearing her podcast, but the results are not there just yet. Emphasizing on the "yet"

Xayok (Jul 7, 2020 at 3:08) (Below Threshold)
She's never "been" on the syndicate. If you read above, she'd been a privateer before, Syndicate supported her a little bit, but she hadn't had a contract.

bananowy (Jul 7, 2020 at 5:24)
@NinetySixBikes: on the other hand you could at least partially attribute the inconsistency to her being a privateer last season. The good ones prove that the speed is there and maybe with the right support she'll be able to dig deep into that speed more often than not. But I don't even race so I'm just speculating.

NinetySixBikes (Jul 7, 2020 at 5:52)
@bananowy: There's bound to be some disadvantage in not being a full time racer compared to the other racers. But let's not forget that she's a late bloomer in the sport, she wasn't spoon-fed at the age of 4 like some of her competitors. Makes me like her even more.

bananowy (Jul 7, 2020 at 6:09)
@NinetySixBikes: True that. Seems like she's more 'self-made' than most in several ways. Impressive and def not easy.

Jimmy0 (Jul 7, 2020 at 8:20)
There was an interview I think here on pb as well as the downtime podcast and she said she "had offers" but decided to run her own program so she can do what she wants

EliasBluhm (Jul 7, 2020 at 22:00) (Below Threshold)
It’s because of the costs to bring a women into the team like different rooms toilets And so on

On another note, on those 2021 Commencals there are a couple other new Schwalbe bits. Nobby Nic finally gets a soft compound version and less flimsy casing. There's a new 'supertrail' casing that's probably between snakeskin and SG, something like EXO+ at Maxxis.

Mattysville (Jul 7, 2020 at 6:06)
@bananowy: I've been running a Mary up front and Hans Dampf in the back on my trail bike all spring and its a great combo. My new Norco Aurum HSP came with Assegai's and i'm not impressed... Luckily the team I ride for has a deal with Schwalbe so i'm going with the Mary/Hans combo on that too until it starts getting wet in the fall then I'll probably go Mary/Mary.

bananowy (Jul 7, 2020 at 6:35)
@Mattysville: Agreed, Mary up front is the tits for most types of bike, game changer. I just put a HD SG on the back and very happy so far. It's my first HD II and a completely different story to the old one that was a bit of a flop. I had a Nobby Nic on the back but got tired (hehe) of flats and didn't love the harder compound. The new supertrail soft version should be great for trailbikes because the NN tread is good, only was let down by the lack of more aggressive options.

That Betty though. The perfect rear for MM front on softer trails? Should clear better than HD with fewer knobs and the cornering feel will be closer with that side tread.

suspended-flesh (Jul 7, 2020 at 16:13)
@Mattysville: Hans D isn't much help when the going gets rough. Tried a Mary/Hans on the enduro bike and quickly went back to M/M. Then to M Wild Enduro Gum-X which were very difficult to wear out. Next will be M22s. Back to Michelins after many years away in Maxxis and Schwalbeland

bikefuturist (Jul 7, 2020 at 2:46)
interesting she aint using 27 rear tyre, given much taller syndicate male riders are!

SonofBovril (Jul 7, 2020 at 2:19)
GOT-jena.de seems to do custom machining and painting, wonder if we will see some custom links and paint jobs on Nina's bike this year?

livlief (Jul 7, 2020 at 5:38)
Not sure what's the late prototype stage on the stem and bar considering that's the exact adjustable 35mm stem already used on the Pivot Phoenix 29 for the last year or so. Either way, I like that you can access and adjust the forward mounting bolts through the stem without removing the bar like some other adjustable reach stems out there.

bananowy (Jul 7, 2020 at 1:55)
It's the new Big Betty (as seen on new Commencal bikes) and I'm not sure where the hell the guys above me see a DHR lookalike there. It's very clearly Hans Dampf centre tread without the transition knobs, plus a Mary-esque (though smaller) side tread, sort of like on the Rock Razor. But yeah every tyre "lOoKs LiKe a MaXxIs" is the new "looks like a session" I guess...

bananowy (Jul 7, 2020 at 2:18)
@Trudeez: Haha yeah indeed, and any other mtb tyre that doesn't have weirdly angled knobs

Though I just looked at the Kaiser and it is closer to that than the DHR actually. Except for Schwalbe's angled, more rectangular side knobs and differently alternating centre (narrow-wide-narrow vs narrow-wide-wide-narrow).

christiaan (Jul 7, 2020 at 7:57)
Wait what?!?! Finally the magic mary ultra soft is finally available in Super Gravity? Since when?

ORTOGONAL555 (Jul 8, 2020 at 2:37)
It's aleays being available. I've being using it since the addix conpounds were released a few years ago

seismicninja (Jul 7, 2020 at 2:22)
Not that it matters but I ride a size bigger than I am "supposed to" and I much prefer the more spacious feel.

DocT (Jul 7, 2020 at 2:24)
I was wondering the same. What am I supposed to ride with a 6´3 frame, then? Some seem to be rather a passenger than rider on their rig but that's probably just the impression of dimensions. Nice sled, though!

NickBosshard (Jul 7, 2020 at 3:05)
@DocT: Lots of pros ride at least a size up from what would be considered the "correct" size for their height. At the speeds they are going, it probably helps quite a bit to have a longer bike if you can manage it.

Twenty6ers4life (Jul 8, 2020 at 8:48)
She’s on a large, but runs the chainstays in the short and low position as well as the “reverse reachset” headset which reduces the reach by 6mm. So it’s probably between a medium and large with this setup? Still seems big though.