What’s better than being locked in the house with nothing to do and loads of free time? Being locked in the house and shooting a sick Trials bike edit! That’s what the last four weeks have been like in Fabio Wibmer’s household in Innsbruck, Austria. In Home Office, the Austrian Bike- and YouTube star takes us around his house in true Wibmer fashion - sprinkled with a serious dose of creativity: 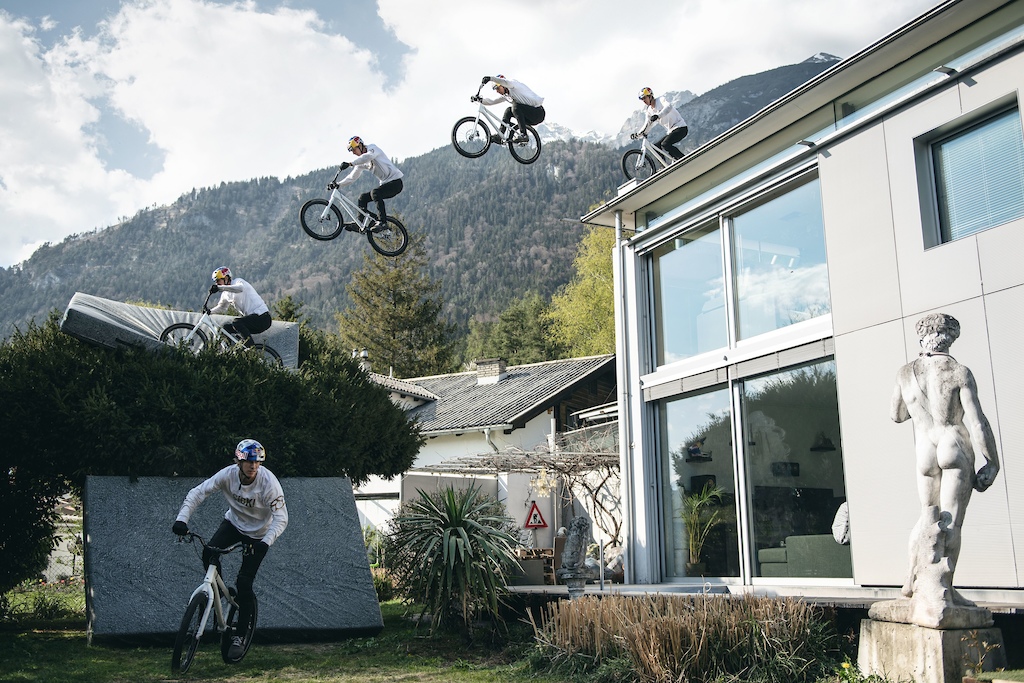 Right from the start of the five minute action-packed edit it becomes clear that Fabio Wibmer’s life isn’t complete if he’s not on a bike. Doing chores without a bike clearly doesn’t entertain the Austrian, and nobody comes to his living room signing session – so he plans his creative escape from lockdown boredom – of course using his bike. From the get-go, Fabio goes big with a jump from his roof and from there on in, it’s boredom no longer. Jumping on and over homemade obstacles, balancing on household items and using his laundry machine for far more than it’s intended, Fabio cruises around the house, annoying his roommates while he’s having the time of his life. 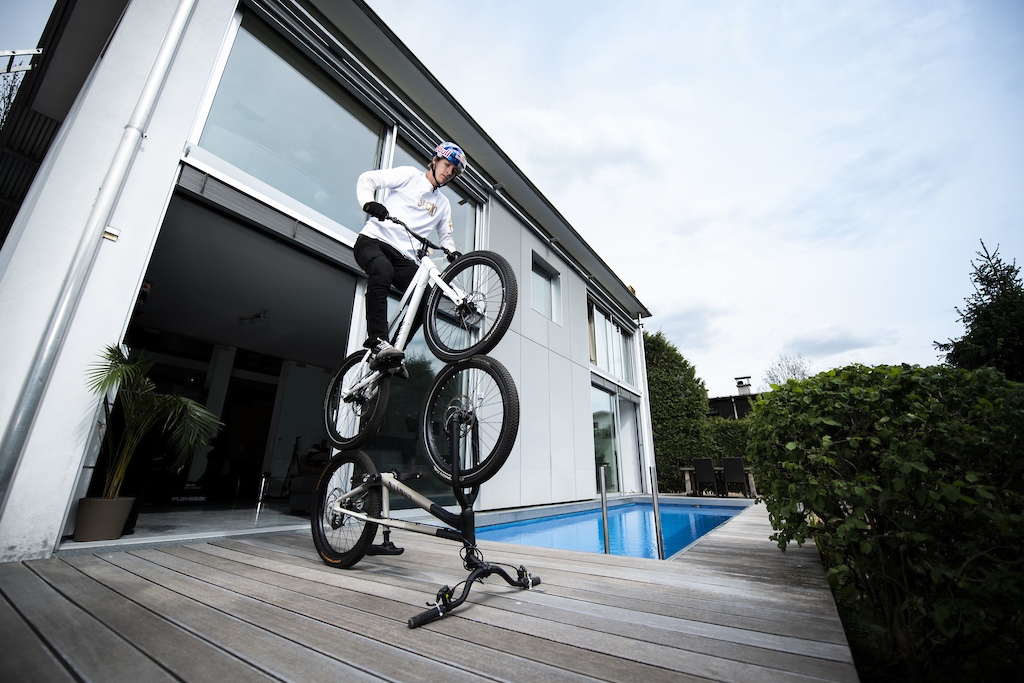 He doesn’t only annoy his roommates though – he helps them with the laundry or keeps his friends’ company during lunch and the afternoon yoga session. Taking a leaf out of the Dude Perfect book, he also takes out the trash, plays a bit of basketball and shoots some darts. As if that wasn’t enough, Fabio puts his balance to the ultimate test – riding over plenty of obstacles, including a seesaw and his second trials-bike, and let’s not forget about the bag-jump, the trampoline and the pool. The cherry on top is the "Pit Stoppie" - a nose manual, where Fabio rolls his loose rear wheel against a wall and then mounts it back on his bike, without ever leaving his pedals. 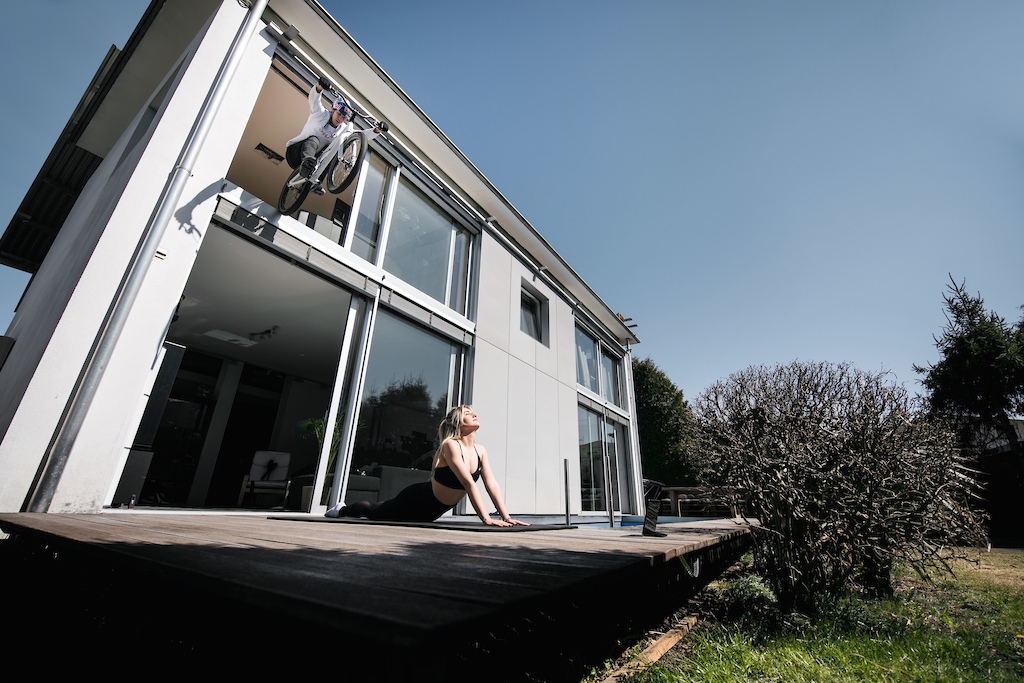 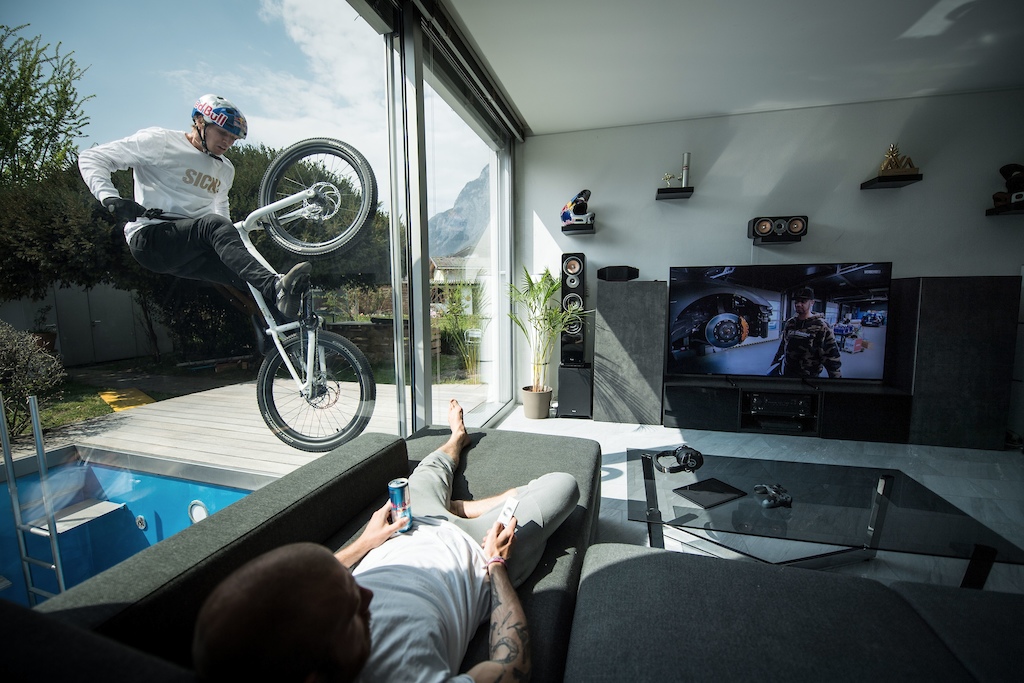 Home Office was shot in Fabio’s house in Innsbruck over the last four weeks and shooting it was everything but easy. “We knew we wouldn’t be allowed to leave the house for a while, without really knowing how long, but we wanted to put something together which would let people take their mind off of things, to not think about what’s going on in the world, even if just for five minutes – to put a smile on their face,” says the 24-year-old Austrian. 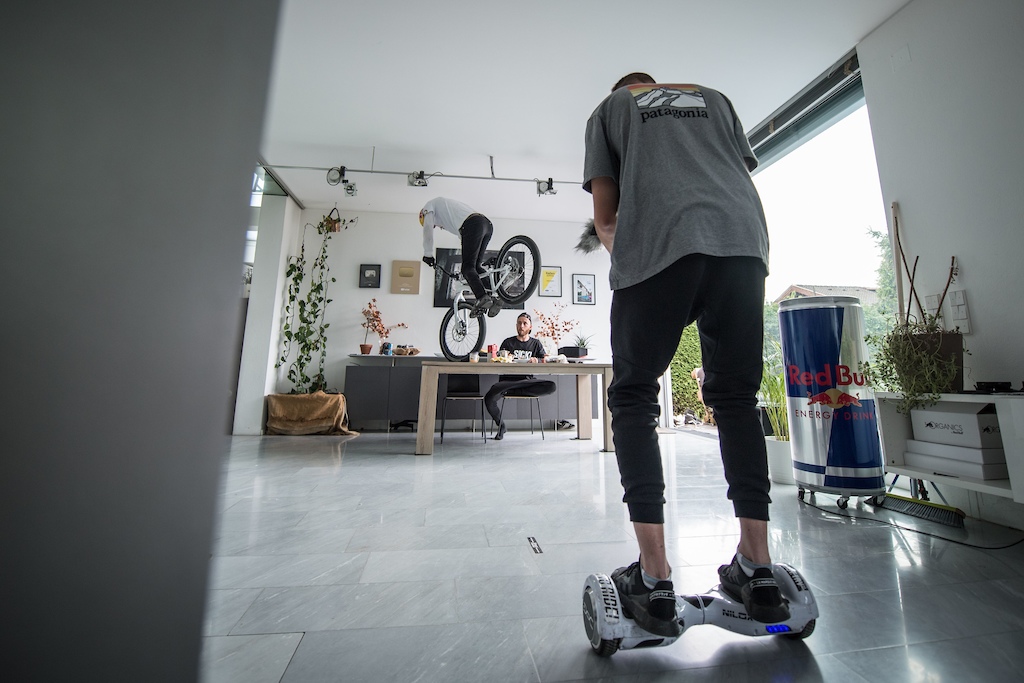 “At the same time, we of course wanted to make sure we didn’t take unnecessary risks or show anything dangerous – it was extremely important not to get hurt, we wanted to avoid that at all costs. This is why we had to get creative with what we had. As we could only shoot in the house and in the garden, we needed to plan everything, try everything, to see what would and what would not work. For some of the tricks, we needed more than 600 tries. The Dude Perfect guys would give us a big thumbs up.” 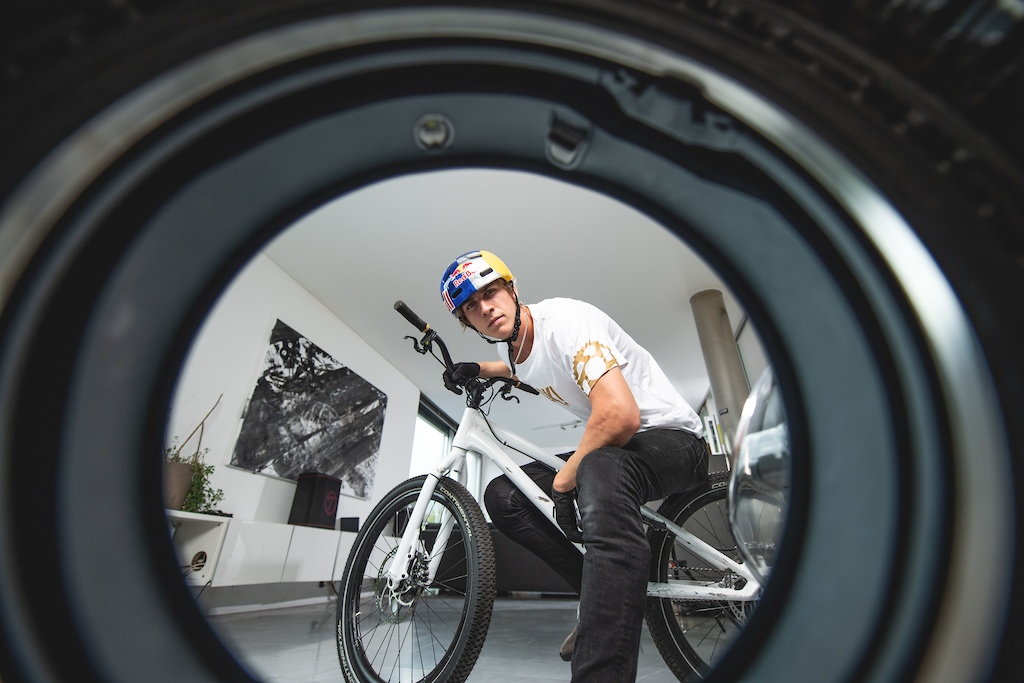 More information about how Home Office was made and the work that went into it can be seen on www.redbull.com/fabioshomeoffice in a special 20-minute Behind-the-Scenes feature.

timlake (May 5, 2020 at 5:56)
when this lockdown is finished, do you think we can have Danny Mac and Fabio in a big city and a huge game of B.I.K.E? Maybe Red Bull's insurance wouldn't cover it.

RowdyAirTime (May 5, 2020 at 8:49)
Danny vs Fabio, now that would be something... I'm sure Danny has been many people's favourite trials rider for a long time, as no doubt he's the trials master. DMac definitely has more experience and probably better balance, but Fabio has bigger balls and can really send it, riding different types of bikes. They are both a lot of fun to watch and make great entertaining videos. Yes, there's some Danny Mac influence in Fabio's riding, but I'm sure this would apply to any top trials rider...Keep up the good work Fabio, you videos rock!

GnarAZ (May 5, 2020 at 22:24)
@RowdyAirTime: agree. I have always been a Danny fan but feel like Fabios trials skills closing the gap rapidly and he has versatility and a sendy riding style that puts him in a league of his own.

swenzowski (May 6, 2020 at 4:40)
Oh hells yeah, I would love to see where their styles overlap and where each of their limits are. I'm sure both of them could pull some weird shit that the other can't do.

neimbc (May 5, 2020 at 6:00)
Very original and entertaining. His balance to balls ratio is unbelievable.

friendlyfoe (May 5, 2020 at 12:40)
A number of those tricks were either created or at least popularized by Danny that you see here, like the front flip onto the cardboard boxes. This is the first video of Fabio's that I would actually say is on the same level as Danny's, and he did it in lockdown!

But I do have to laugh a bit when he says they ''didn’t take unnecessary risks or show anything dangerous – it was extremely important not to get hurt, we wanted to avoid that at all costs''.....and then he flips off the top of the house into a pad laying on the tree.

after traveling and seeing pros not make a lot of $$$$ it makes me stoked to see mtb athletes financially successful (cedric, gwin, fabio, gee, etc...)

"how do you make a million dollars in racing? Start with two million."

it a joke that (almost) no one gets rich racing.

bikeybikeybikebike (May 5, 2020 at 7:54)
He jumped off the roof at least 4 times in this video alone. I'm betting he didn't go a week living in that house before he jumped off the first time.

mireksuchomel (May 5, 2020 at 5:26)
I'm starting to like this lockdown period for bringing such a creative opportunities. Love it!

rodeostu (May 5, 2020 at 9:10)
I like the detaching / reattaching wheels bit. Reminds me of some of Daewon Song's videos, where he'd do something similar with skateboard wheels (such as removing or installing a wheel mid-ollie).

Mac1987 (May 5, 2020 at 14:26)
That's awesome. You can achieve so much and have so much fun when being creative. Being grounded as an adult because of a virus doesn't mean you have to watch TV all day! (Me: reading PinkBike and bingewatching Netflix all day...)

nurseben (May 5, 2020 at 10:55)
So I just got myself a 20" mod, started playing with it, and all I got to say is the kind of riding these guys are doing is even more mind blowing after trying simple tricks. Seriously, if you've never tried to ride backwards, just do it, f'ing hard and these guys do it likes it's not a thing!

fast-n-loose-podcast (May 5, 2020 at 6:17)
The Banksy of the MTB world has dropped another masterpiece! The creativity this crew brings is unreal!

SirWonky (May 5, 2020 at 11:49)
Probably the first person to ever fakie wall tap a plate glass window. Would make a great stress test product promo for the manufacturer

Jordanh604 (May 5, 2020 at 11:40)
I noticed there was not a brake rotor in the detached wheel shot, and tape on the floor in the last scene marking out his positions.

Anyone notice anything else throughout the vid? Not down playing this amazing vid at all. Just cool to notice little things like that.

aljoburr Plus (May 5, 2020 at 9:22)
So is that an Inspired with Canyon stickers on it?
Would be great to have trampoline & an Air bag in back garden right now!

GnarAZ (May 5, 2020 at 22:27)
Replayed that scene suspecting it would be called foul for sexism, was more of a friendly upper chest tap.

oldmanhucking (May 5, 2020 at 18:47)
Fabios creativity never ceases to amaze, let alone his riding ability. Truly blessed to just be able to watch this stuff

gossman (May 7, 2020 at 12:02)
So fun and entertaining! The imagination and skill is ridiculous!! I was giggling the whole time

CSharp (May 8, 2020 at 13:23)
Incredible stuff even if it took several takes to get it right! Those fluke shots with one take are amazing!

mtbmaniatv Plus (May 5, 2020 at 8:02)
If your roommates don't appreciate that, you need new roommates! Legend

k2rider1964 (May 5, 2020 at 10:55)
So enlighten me PB editorial staff....how is it that you can continually post and promote videos like this while at the same time having a highlighted banner a the top of your page with BOLD lettering telling people this is not the time to put unnecessary risks that will stress the health systems, finishing off by telling people "DO NOT take risks".

FWIW, I like the videos as much as the next guy and think the riding is incredible. I just despise hypocrisy.

Jordanh604 (May 5, 2020 at 11:37)
Because Fabio jumping off his roof is different that thousands of average citizens jumping off their roof. Kind of like a professional driver doing 100mph + and me driving 100mph +

cunning-linguist (May 7, 2020 at 6:43)
@watchtower: Apparently it is extra cool and grown up to have absolutely zero sexuality or drive and ignore the most natural things in the world.