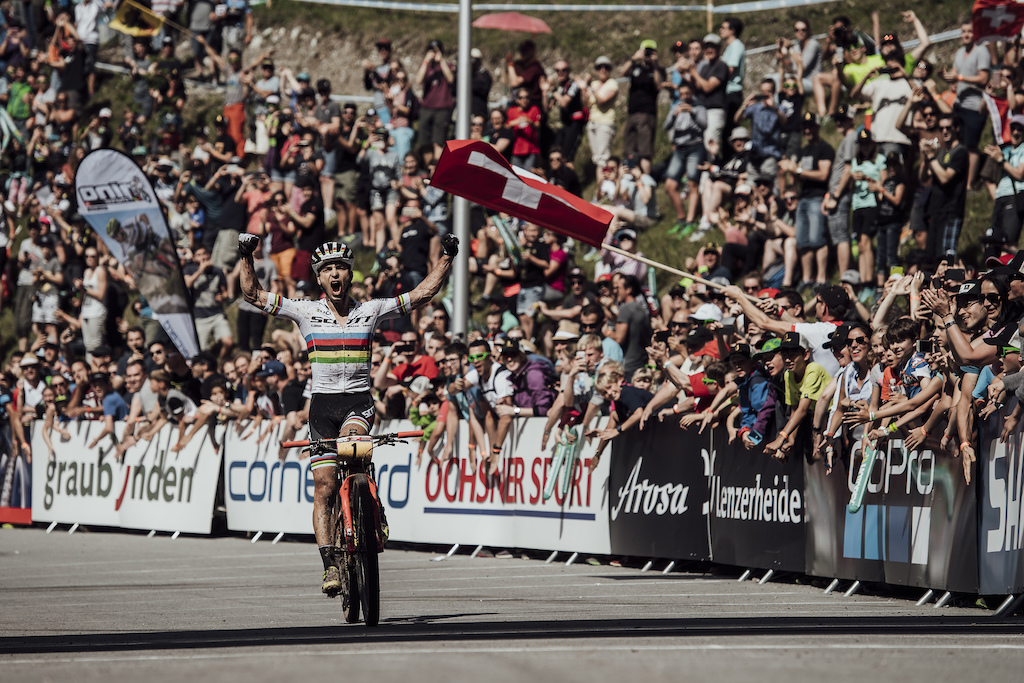 Everything is set for the grand finale of this year’s Downhill and Cross-Country race season at the UCI Mountain Bike World Championships presented by Mercedes Benz this weekend. On Saturday and Sunday, all past race results count for nothing. Only the results from this weekend will determine who wins the fight for the coveted Rainbow Jersey and the title of World Champion. Can Swiss Cross-Country stars Jolanda Neff and Nino Schurter defend their respective titles in front of their home crowd? Will the title in the Men’s Downhill go to a Frenchman once again, or will the old guard in form of Aaron Gwin (USA) and Greg Minnaar (RSA) strike back after an unlucky season? Will the title in the Women’s Downhill be decided between the two Brits, Rachel Atherton and Tahnée Seagrave, or will we see another surprise victor like last year? 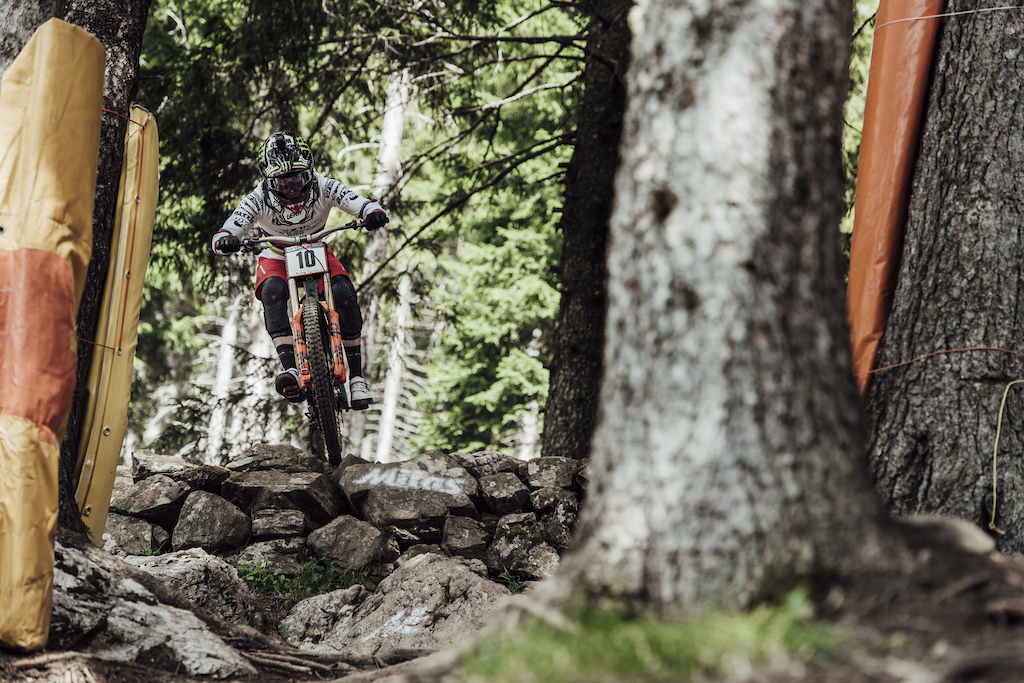 After three World Cups over the past three years, the 4.2km-long “STRAIGHTline” in Lenzerheide will now host a World Championship for the first time. Not everything is the same though as the high-speed track will greet the athletes with a brand-new section in the woods in the lower third of the track. After an intense and exciting World Cup season, the competition in the Men’s Downhill is as fierce as it has ever been. Next to the young, yet extremely strong, roster of Frenchmen like World Cup Overall Champion Amaury Pierron, reigning World Champion Loic Bruni and young gun Loris Vergier, who have all won at least one World Cup this year, all eyes will be on the old guard. Both Greg Minnaar (RSA) and Aaron Gwin (USA) were sidelined with injuries for much of the World Cup season and once healthy again, have shifted all their focus specifically on the race in Lenzerheide. Especially Aaron Gwin, who has dominated the sport in recent years, won 17 World Cup races and five of the last seven World Cup Overall titles, will be eager to win the Rainbow Jersey, a feat that has eluded him thus far. Other red-hot favorites include two-time World Champion Danny Hart (GBR), Enduro star Martin Maes (BEL), who sensationally won the last World Cup of the year in La Bresse just over a week ago, young American Luca Shaw, Brook Macdonald (NZL), Troy Brosnan (AUS) and Laurie Greenland (GBR). 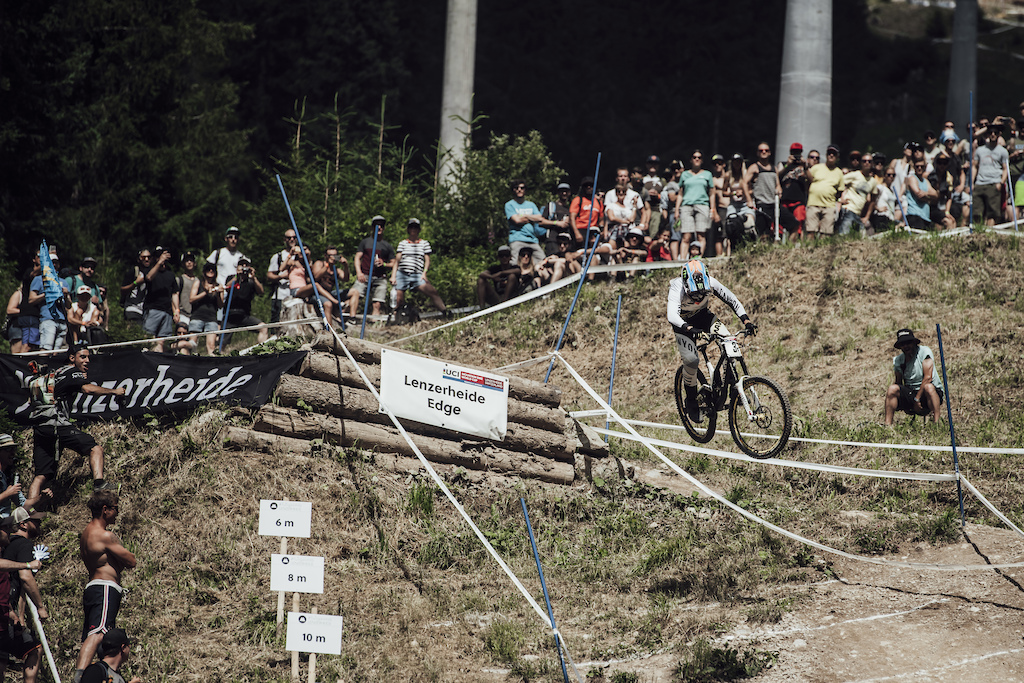 The women’s field saw a fierce battle between the two Brits Rachel Atherton and Tahnée Seagrave during the last few weeks of the World Cup season. Both will travel to Lenzerheide as clear-cut favorites for the title, but last year’s World Cup Overall winner Myriam Nicole (FRA) will likely be fully recovered from her mid-season injury and bring the fight to the two Brits. The surprise victory of Miranda Miller at last year’s World Championships also proved the point that anything can happen in the biggest single race of the year, which means that only one thing is certain: the racing in Lenzerheide is guaranteed to be hard fought and exciting. 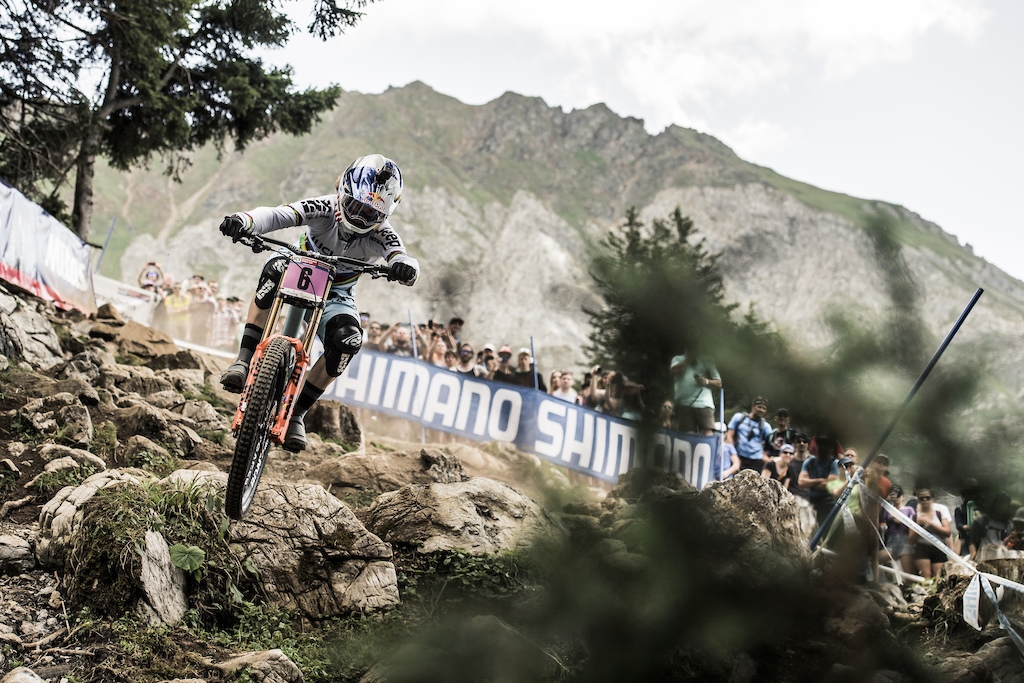 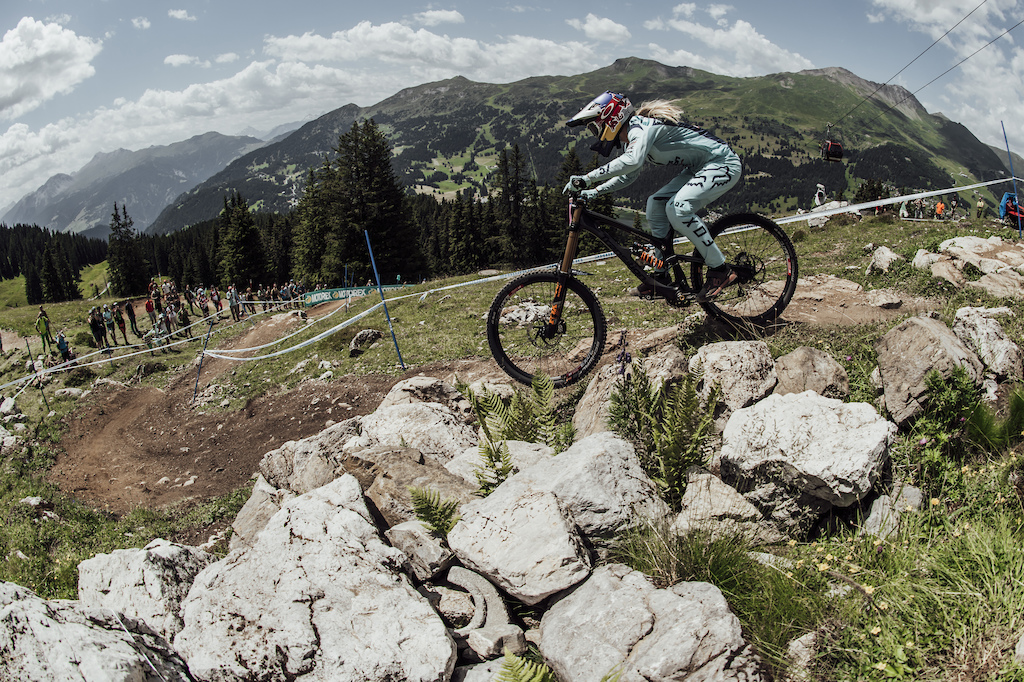 The Cross-Country athletes will be greeted with the same brutally exhausting and demanding track from last year’s World Cup. With 188m of climbing to be done in each 4.2km-long lap, the course is guaranteed to bring athletes to the limit. The Swiss fans lining the course in Lenzerheide will especially be looking forward to Nino Schurter. The reigning World Champion and World Cup Overall Winner has the chance to defend his title on home soil and will heading into the race as the big favorite. However, contrary to his historical perfect season last year, Schurter has had to fight off a strong charge in this year’s World Cup season. Mathias Flückiger (SUI), Gerhard Kerschbaumer (ITA) and Sam Gaze (NZL) all managed to defeat the Swiss XCO dominator during the course of the season. While Gaze will not be able to start in Lenzerheide due to an injury, Kerschbaumer and Flückiger are sure to bring the fight to Schurter. Other riders who have the legs and lungs to potentially beat Schurter in his backyard include Mathieu van der Poel (NED) and the strong French contingent around Maxime Marotte, Jordan Sarrou and Titouan Carod. 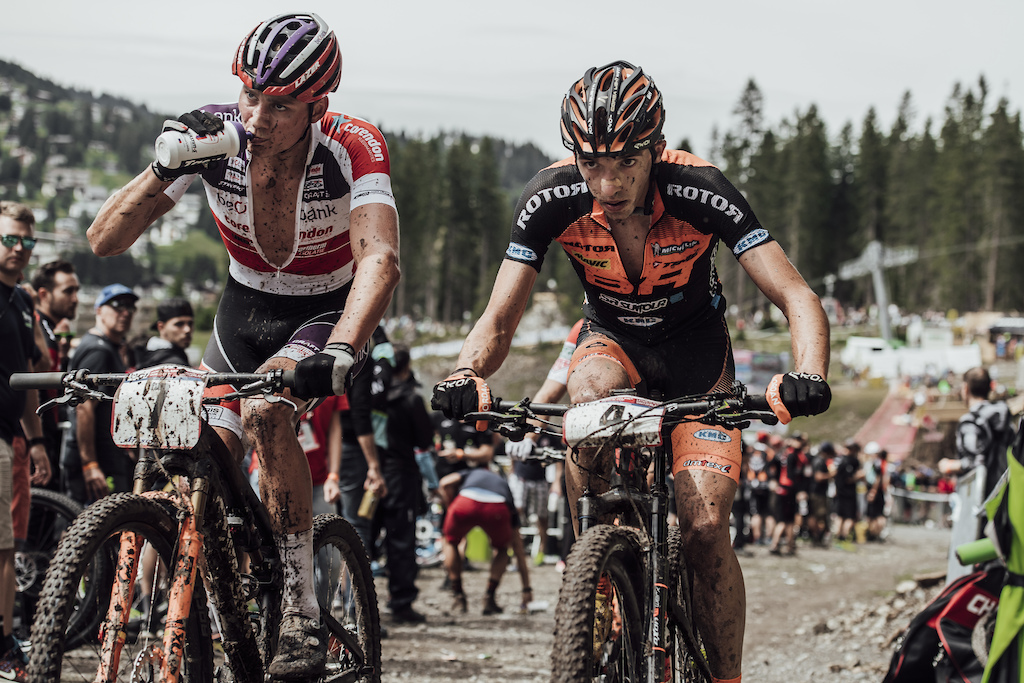 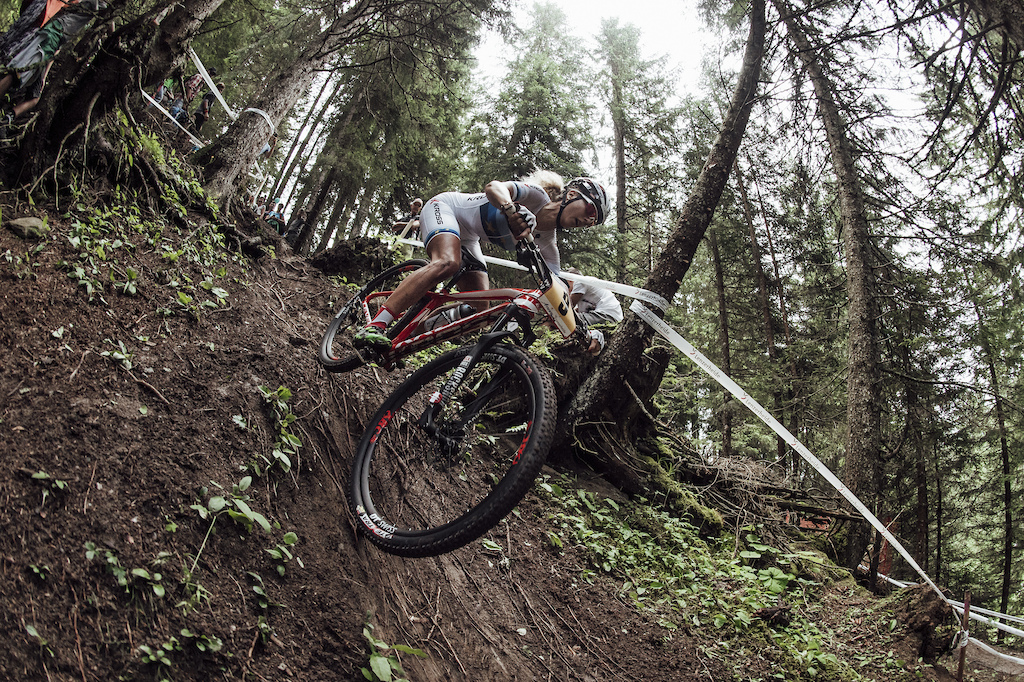 Just like in the Men’s field, the Swiss fans will be cheering especially loud for one of their own. After winning the World Cup Overall Title, Jolanda Neff will be more than just motivated to defend her World Championship title in front of her home crowd. Her biggest competition in the fight for the title will likely be the same it has been all season long: Annika Langvad (DEN). Neff and Langvad will however also have to fend off the charge of the likes of Pauline Ferrand-Prévot (FRA), Maja Wloszczowska (POL), Emily Batty (CAN), last year’s Overall World Cup winner Yana Belomoina (UKR) and young guns Anne Tauber (NED) and Kate Courtney (USA). 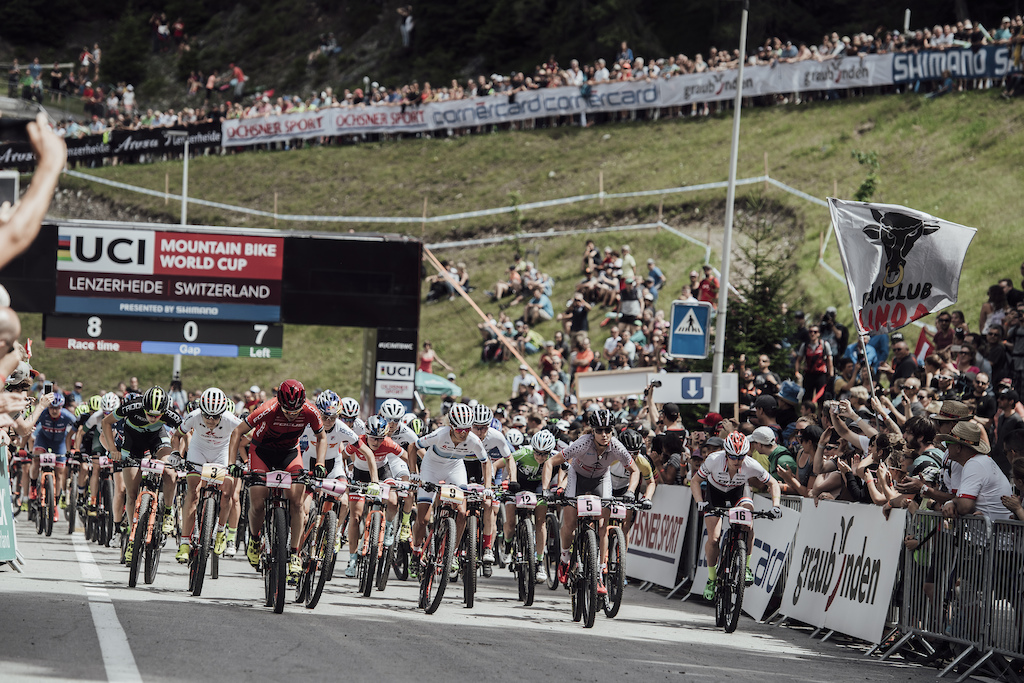 Watch the UCI Downhill Mountain Bike World Championships presented by Mercedes Benz free of charge, live and on demand, on redbull.tv/uci. The live coverage kicks off with Cross-Country on Saturday, September 8 at 12:00 CEST, while the world’s best Downhill riders will be taking the trail on Sunday, September 9 at 12:30pm CEST.

Get the latest on everything bike related on the Red Bull Bike Channel at redbull.tv/bike.

Please note that the broadcast will unfortunately be geoblocked in certain countries. Due to licensing agreements between the UCI and national/local broadcasters, Red Bull TV will NOT be able to provide a broadcast or VOD in the following countries:

[UPDATE: Canada and South Africa are going to receive the live broadcast and replay on Red Bull TV]

suspended-flesh (Sep 5, 2018 at 23:44)
I'd honestly like to know why it's not available in Palestine. I suspect some fvcking bvllsh1t is up with that. At least they can watch in Chad. They have the best audience. A fantastic audience - they do a fantastic job in Chad.

chakaping (Sep 6, 2018 at 0:30)
If you're unhappy about the geoblocking, don't swear at Red Bull here - instead write a polite email expressing your disappointment to the UCI at offroad@uci.ch
If enough people do this, they may take notice. Maybe copy your national cycling organistion too.

Bring on the racing !!! Yeeeeoowwww!!!

gcrider (Sep 6, 2018 at 4:40)
I think you will be as disappointed as not getting that NZD$18200 carbon pivot with carbon bling di2 and fox live this xmas. World camps is on sky4 xco and popup2 for dh. Same happened last year. Go nordvpn or go hunting for a sky dish in your street.

Fahhhmed (Sep 6, 2018 at 0:22)
If you're in one of those countries that RBTV has geoblocked due to broadcast arrangements with the UCI, the chances are you'll be able to watch the race on your TV on a national-based TV/satellite channel. The full rundown of those channels can be found here www.pinkbike.com/news/the-essential-guide-to-the-2018-dh-world-championships.html

acepran (Sep 6, 2018 at 6:40)
It would be interesting to know your source of information @Pinkbike
According to lenzerheide2018.ch the list is different

Skootur (Sep 9, 2018 at 19:32)
Would have been a whole lot better if pay TV companies (like Sky in NZ) weren't able to buy the rights to a free to air broadcast!!! f*ck you Redbull!!! If the rest of the world can watch for free why do a select few countries miss out unless they pay a fee to a massive company!!! Complete bullshit!!!
(And this isn't the first time either!)

philstone (Sep 6, 2018 at 2:33)
How long does it usually take to show up for catchup on RedBull TV? Hoping to watch it later on Sunday evening...

paulskibum (Sep 6, 2018 at 15:49)
You can usually watch it straight after I believe - I normally watch the Euro races on Sat morning - so like 9am when they were only just finished up

JVance (Sep 6, 2018 at 12:02)
@BCDragon: The 'blocked list' were countries with known, significant human rights violations. Canada argued that while Justin Bieber is a Canadian citizen, he currently resides in the US. Canada further demonstrated long-term expatriation by citing Celine Dion's tenure in Las Vegas, thus bringing Canada back into compliance.

Dudeclimbsrocks (Sep 9, 2018 at 4:12)
Wow. @Redbull is covering approximately 30s of each race run.
Below threshold threads are hidden

MingMtnMedia (Sep 5, 2018 at 23:08)
World champs should be able to be viewed by any country that has riders competing #f*ckredbull

Sp4xXx (Sep 6, 2018 at 0:16)
It's not Red Bull bro. If you read carefully you'll notice that the UCI has sold the rights to the broadcast individually to national TV Channels. Those then do not allow Red Bull to broadcast online...

RussellTinka (Sep 6, 2018 at 3:10)
I hate reading schedules. Can someone just tell me when I can watch it live on the east coast USA.
Post a Comment