Just a nerd trying to jump his bike 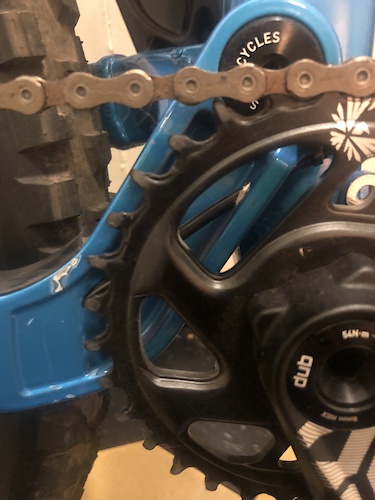 renodj mikekazimer's article
Jan 11, 2021 at 16:38
Jan 11, 2021
Pinkbike Poll: Would You Rather Buy a Frame Only or a Complete Bike?
Let's be real, bicycle manufacturers attempt to pull the same profit amount (not margin) between a complete and frame, so when they sell a complete they're basically getting around a MAP policy by selling you a bunch of parts at cost with their frame. This is why I try to buy completes even when I only need a frame, because I can sell takeoff parts and come out significantly cheaper than buying frame-only. This is also why bicycle/frame manufacturers can't sell frames at even half the rate they sell completes, and this isn't a good thing, even if in the short term it gives us better deals on completes, imagine how things would be if parts were cheaper (due to less being sold OEM at significantly lower margins) and bike shops were selling and building bikes for everyone that needed a new one.

$2400 USD
Wonderful little bike but it's been collecting more dust in the apartment than on the trail. Ridden a handful of times with no crashes Size extra small fits riders from 5'1" to 5'6" Upgraded to tubeless, Lezyne side-entry bottle cage, race face Chester pedals, race face grips and renthal fat bar lite handlebars. Has SX eagle drivetrain, Shimano mt-401 brakes, 95-125mm dropper, recon fork and super deluxe select shock 150mm front suspension and 130mm rear wtb wheels laced to sealed hubs with 27.5x2.6 maxxis minion dhr/dhf tires (tubeless with Stans fluid) $2400 cash/venmo/cash-app Will ship if buyer pays actual shipping costs, which is currently around $200 to get it across the country, I will pack and box for free. Also willing to meet up to halfway for people in Northern CA, Southern OR and Washington/Idaho/BC

$560 USD
Fork has about 6 good rides on it Damper was upgraded with the $305 GRIP2 damper from the factory 36 fork, it has the high and low speed compression and rebound adjustments, it feels amazing Fork is for 29” or 27.5”+ tires 170mm travel 110mm boost axle 44mm rake/offset Axle included Appx 180mm steerer Only selling because I got too curious and ordered a new factory 38, but seriously this fork left nothing to be desired, the damper turned it into a top tier beast. Nearly pristine except for a small rash from a rack, there is a picture of the less than grain of rice sized spot of paint that was rubbed off, and another photo after sharpie-ing that spot. $560, in box with original damper included. Buyer pays actual shipping, or I can meet up with someone local to the PDX/Beaverton Area

Hey there, what’s the lowest you’d take including shipping to 96130? Thanks :)