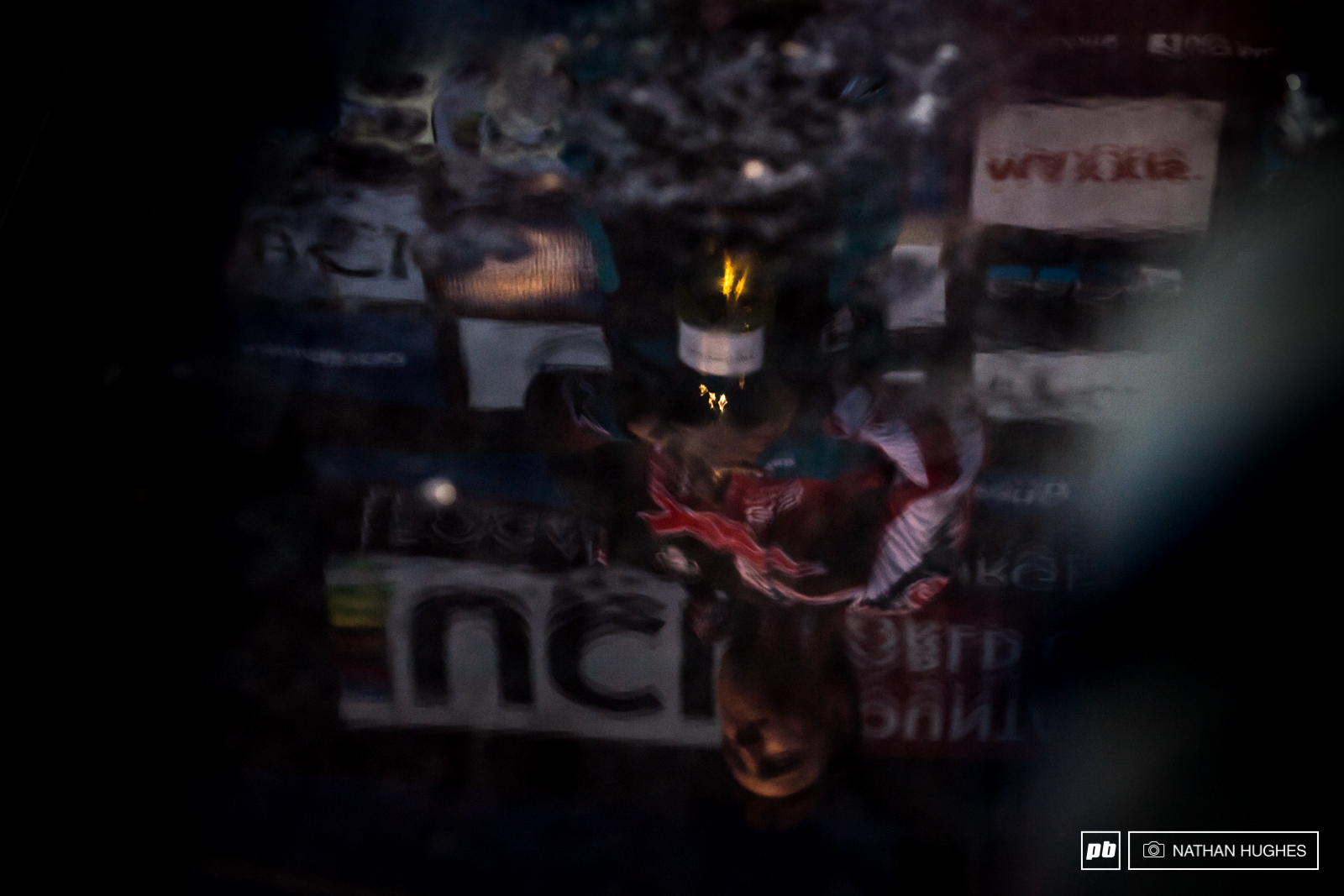 If you’d told me pre-season that we’d be sitting with three different winners from as many races in both the respective men and women categories I’d have said you were dreaming. But, after a breathless start to the season ravaged by weather, injuries, and filled with talk of wheel size and track debate, the state of play is a familiar one atop the men's field with two of the sports greats in Minnaar and Gwin locking horns, but unfamiliar territory in the women with Rachel Atherton’s shoulder injury opening the door for some fresh faces atop the podium.

What Have We Learned? 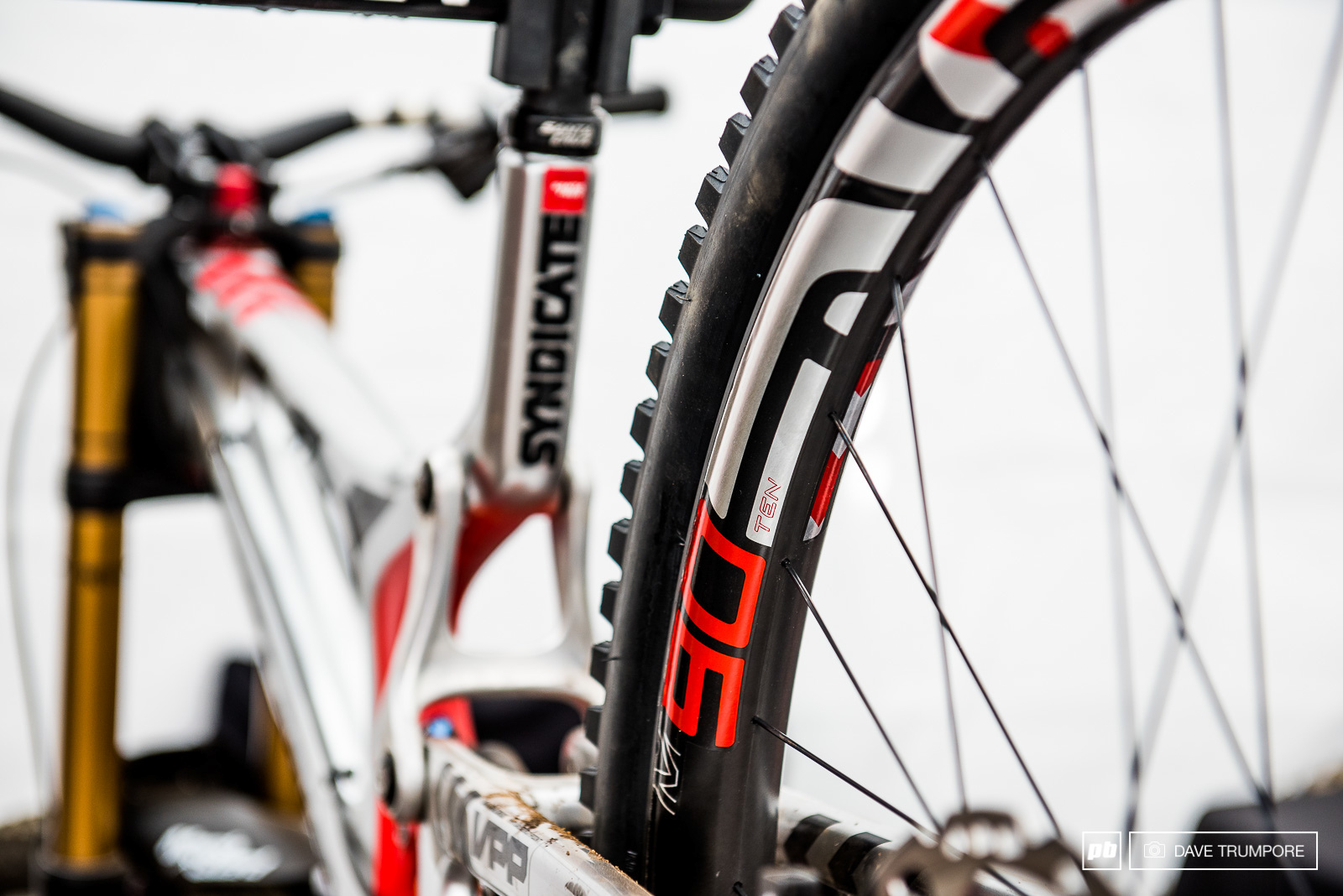 The Syndicate pulled the 29" trigger in Lourdes, plenty more followed in the coming races.
29ers aren’t exactly a magic bullet.
Whilst the men’s overall may feature three riders aboard 29” wheels in the leading five it’s hardly been the big wheel whitewash everyone was so fearful of after Lourdes qualifying. Sure, they may feature heavily in the results sheets but they’re being raced by guys who are in largely the same positions they were in the previous years… Now I’m not saying they aren’t faster but the advantage isn’t as vast as some touted, all is not lost for ye olde 27.5” as Gwin showed so brilliantly in Leogang. 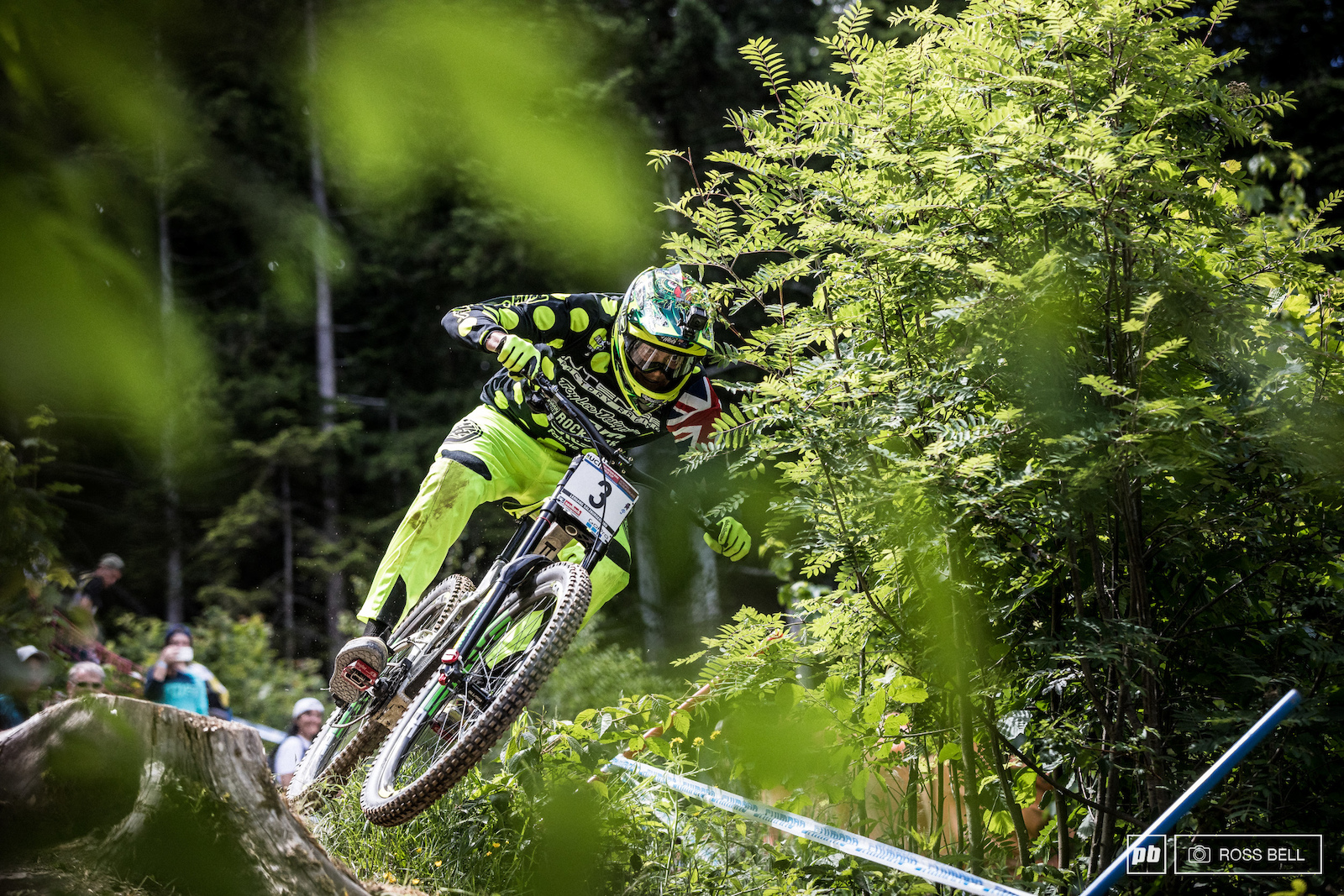 There's a fresh wave of young riders surging to the front and mixing it in with the established riders.

The next generation are coming, and coming fast.
Hot on the heels of the usual suspects who have had a stranglehold on the podium steps are a wave of hungry youngsters desperate for their time in the limelight. Racers like Jack Moir, Loris Vergier, Mark Wallace and Luca Shaw to name but a few, add into that the current crop of juniors with the likes of Iles and Walker and you can be sure we have a tasty prospect for the coming races and seasons. 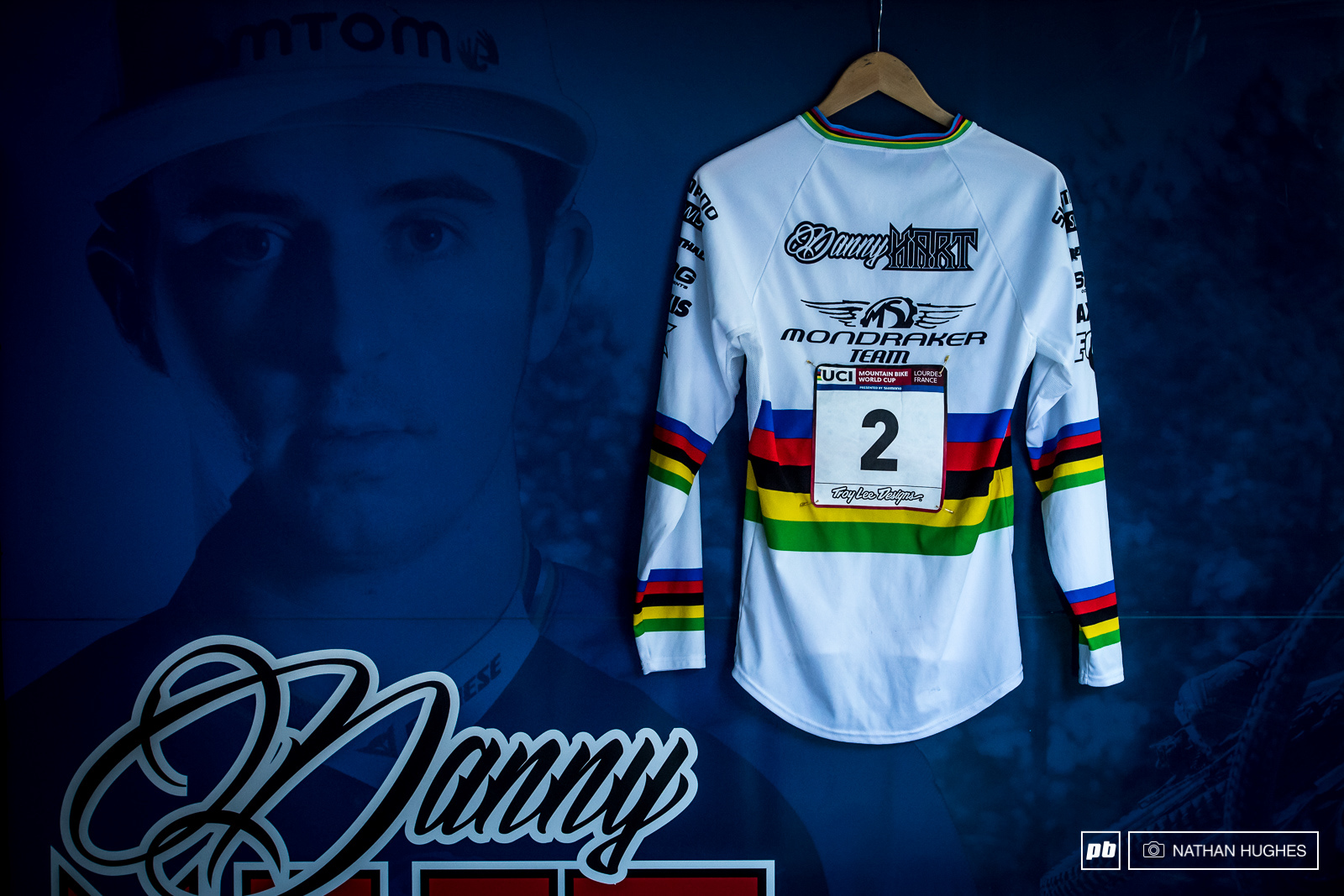 Three races with not much to show for Danny Hart, whilst Rachel Atherton finds herself even worse off after a dislocated shoulder sees her resting up back home.
Carrying the rainbow stripes doesn’t guarantee continued success.


As we’ve seen so many times before just because you’re the reigning world champ and emblazoned in the rainbow stripes doesn’t give you a golden ticket to winning, or mean you’re exempt to injuries for that matter. Just ask Rachel Atherton and Danny Hart. Atherton started where she’d left off in Lourdes, and it looked ominous for her competitors until the trench warfare that was the Fort William woods got the better of her and resulted in a dislocated shoulder. Danny Hart, on the other hand, has been somewhat in the wilderness so far this year with an incident-filled few races. After falling victim to the Lourdes deluge and tasting the dirt in Fort William he climbed to 11th place in Leogang; he’ll be looking to Andorra and his previous success there to really kick start his 2017 season. 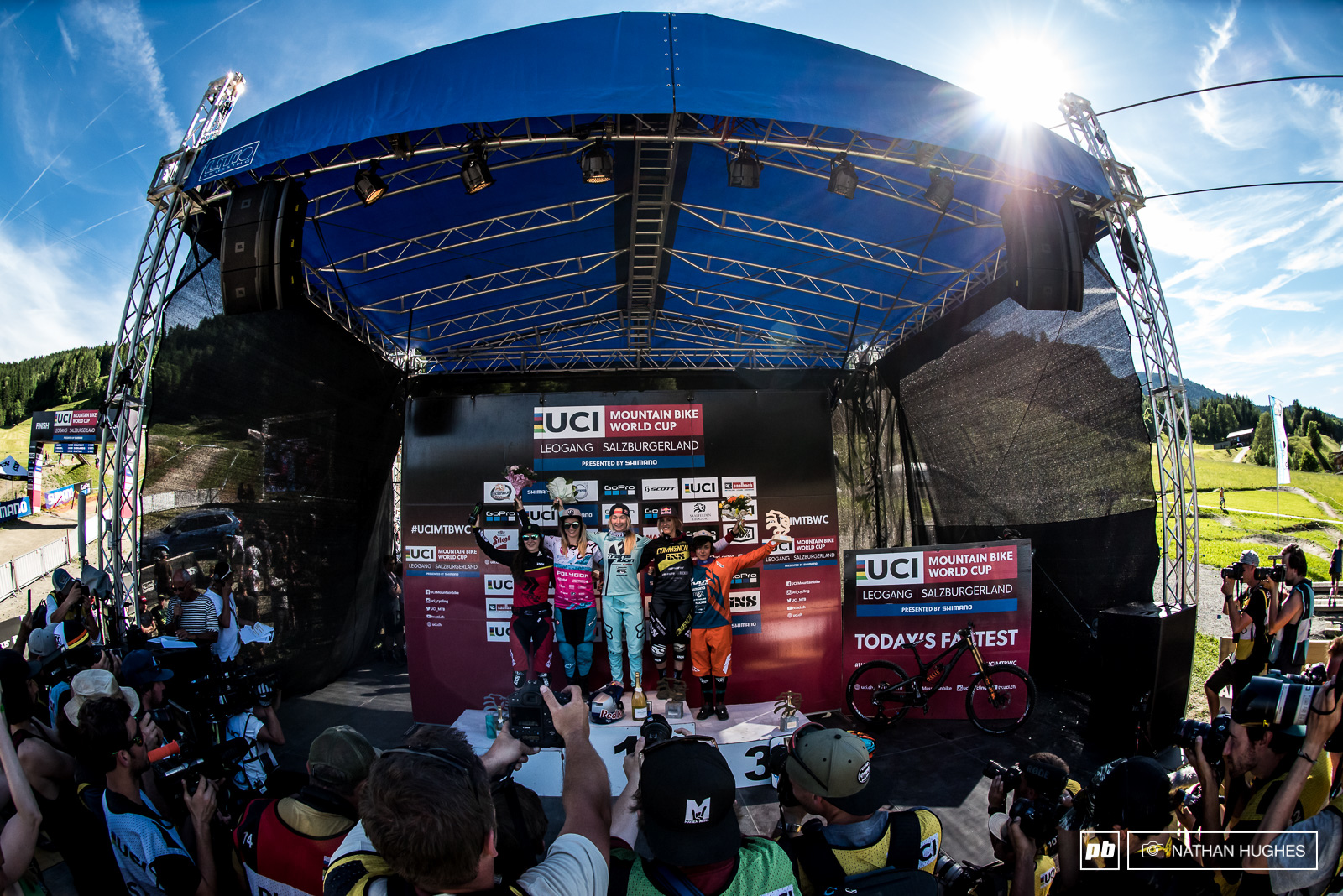 Tracey Hannah has opened up a small but relatively comfortable gap in front of Tahnee Seagrave and Myriam Nicole. Will either be able to challenge in the remainder of the season?

The contenders for the overalls are being whittled down.


It's tight at the top. Tracey Hannah has seized the initiative for the moment and has opened up a snug gap up front but with no room to get complacent, especially given that Tahnee Seagrave has finally picked up her first win, surely giving her confidence for the remaining four rounds. After the rain played havoc with the top qualifiers in Lourdes the results and overall looked to be turned on its head, but it didn’t take long for the top competitors to come surging back. Namely Aaron Gwin and Greg Minnaar who have taken one round apiece and look set to lock horns once again. 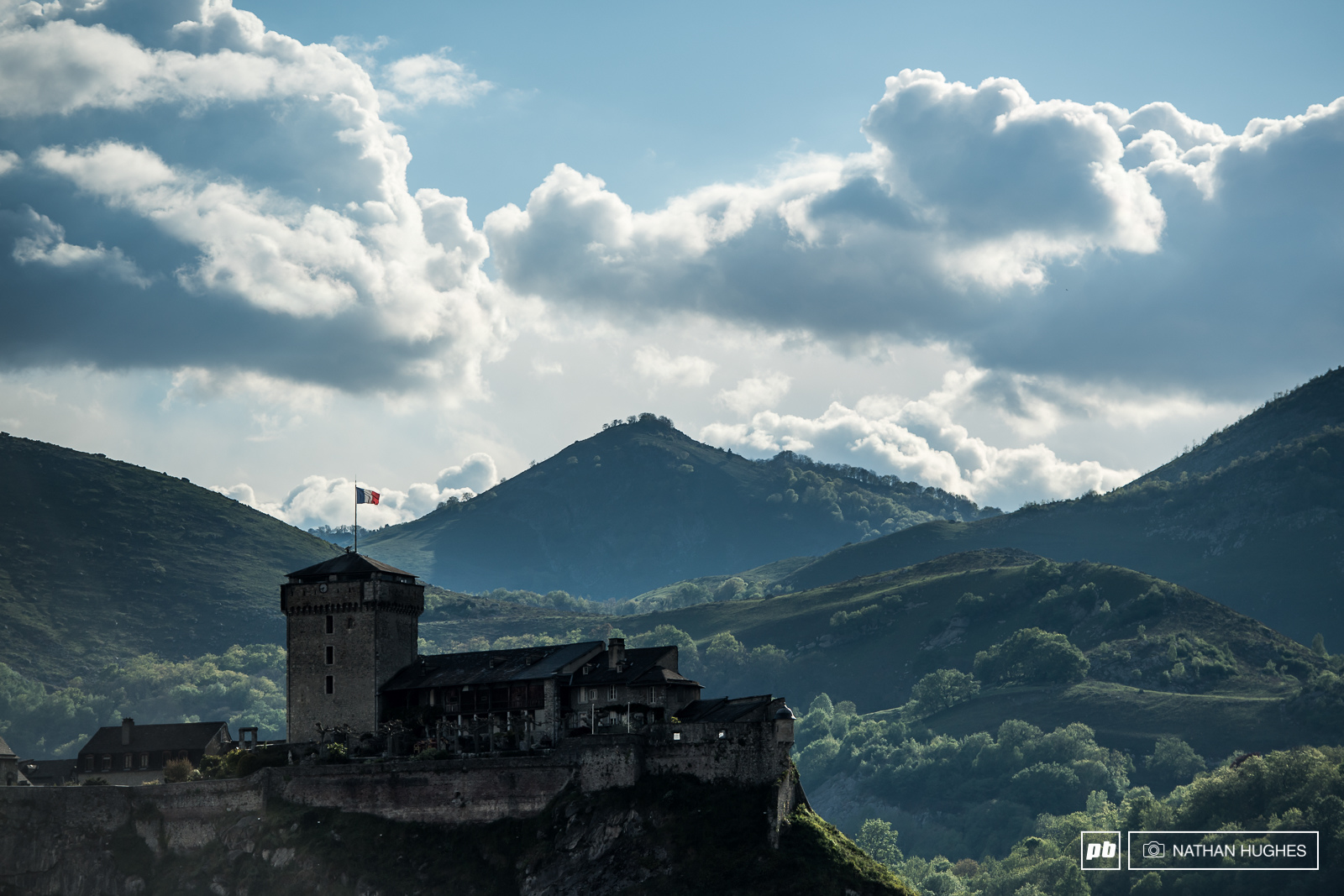 
Lourdes attracts thousands of pilgrims each year and more recently has become an annual pilgrimage for the DH calendar. The big talking point coming into the race was the arrival of 29” wheels on the scene, it was an ominous start with the Syndicate going 1st, 3rd, and 6th… That was until the heavens opened. The race was turned upside down, the dust soon turning to the slickest riding surface possible. As the top 10 slithered their way down the Pic du Jer it was Polygon’s Alex Fayolle who’d laid down a stormer and found himself in the hot seat for the remainder of the day. Tahnee Seagrave had once again seeded first but fell back to third with Tracey Hannah edging ahead of her and Rachel Atherton continuing that winning streak, it all looked a little familiar out front in the women's... 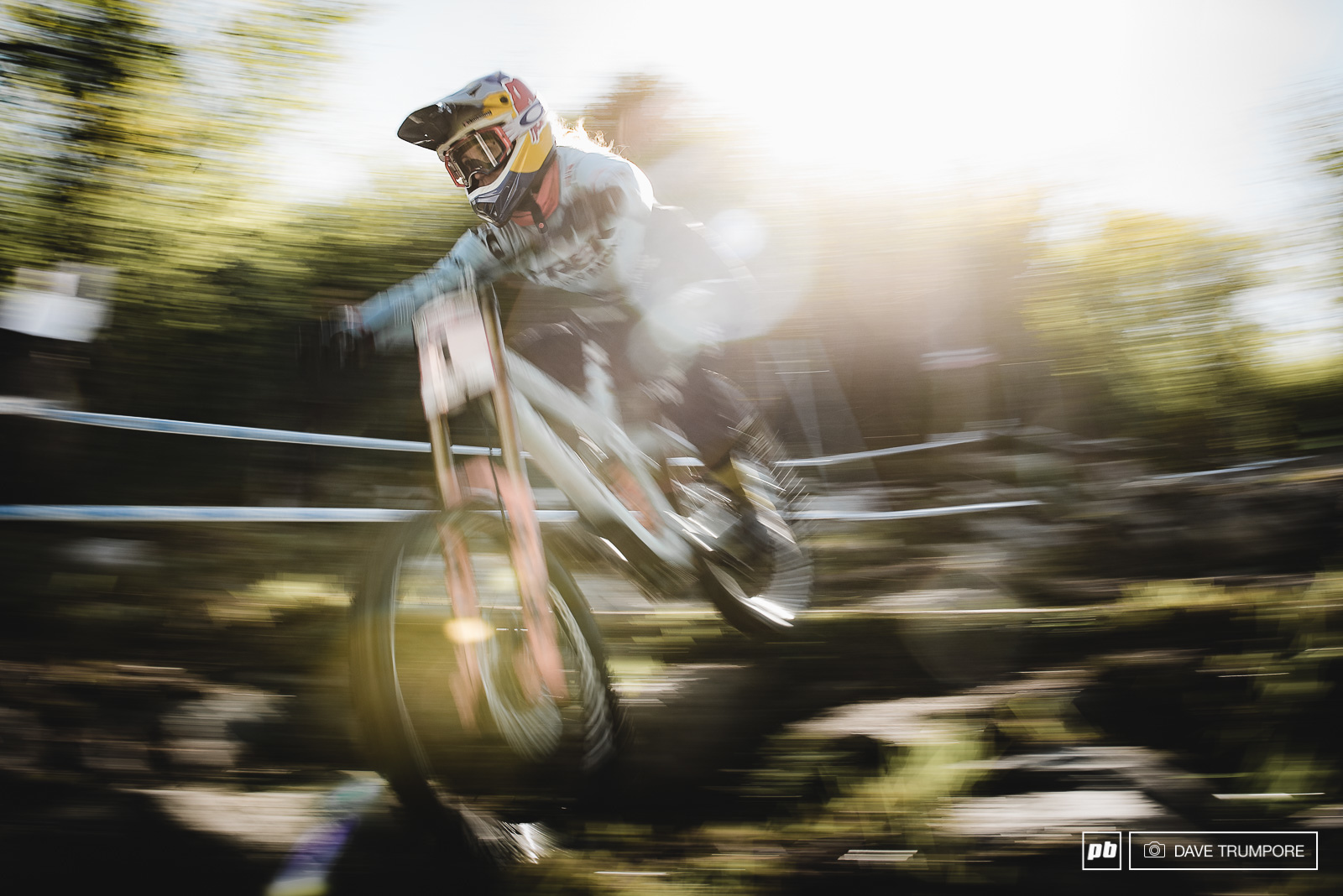 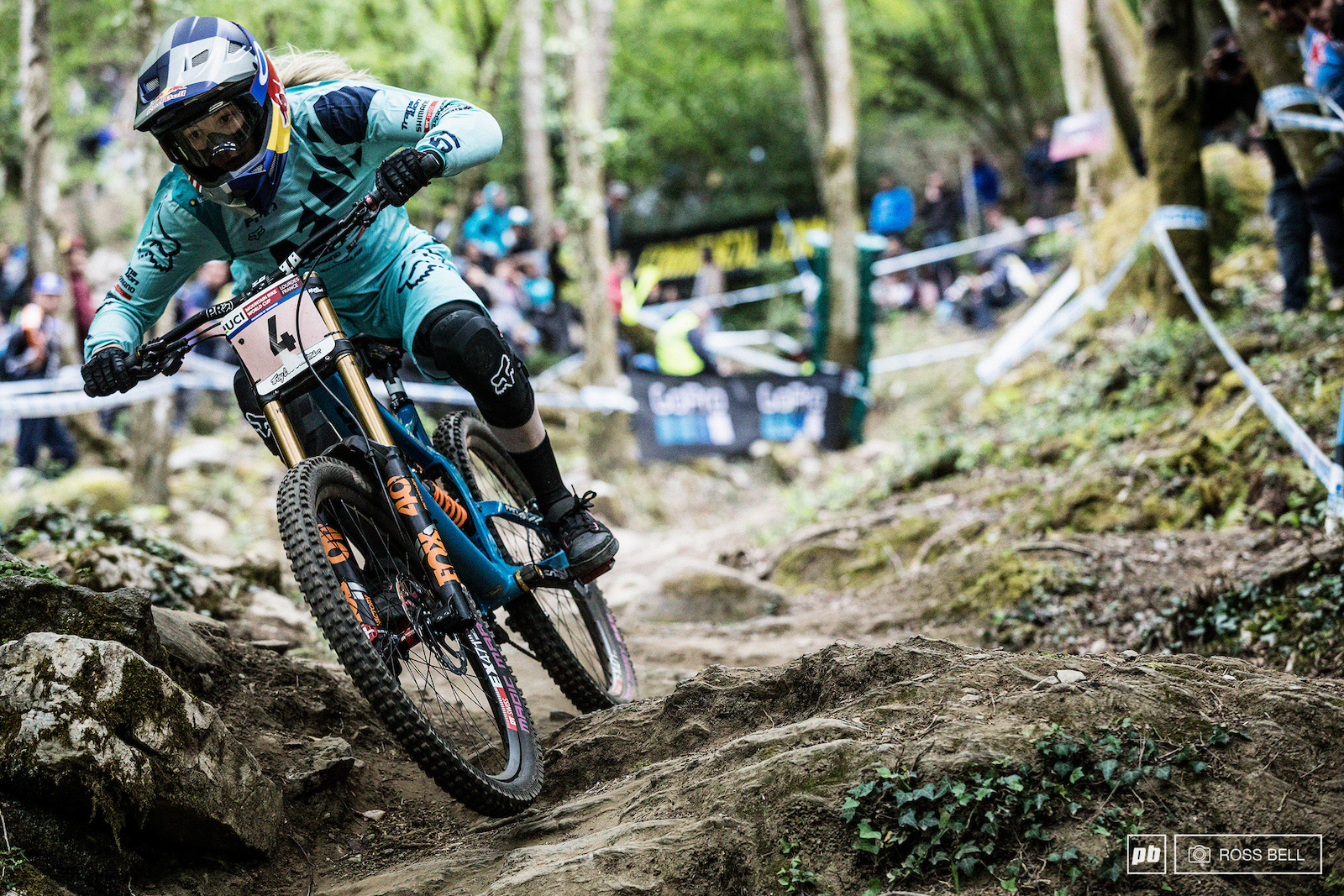 Tahnee Seagrave couldn't match her seeding and faded back into third. 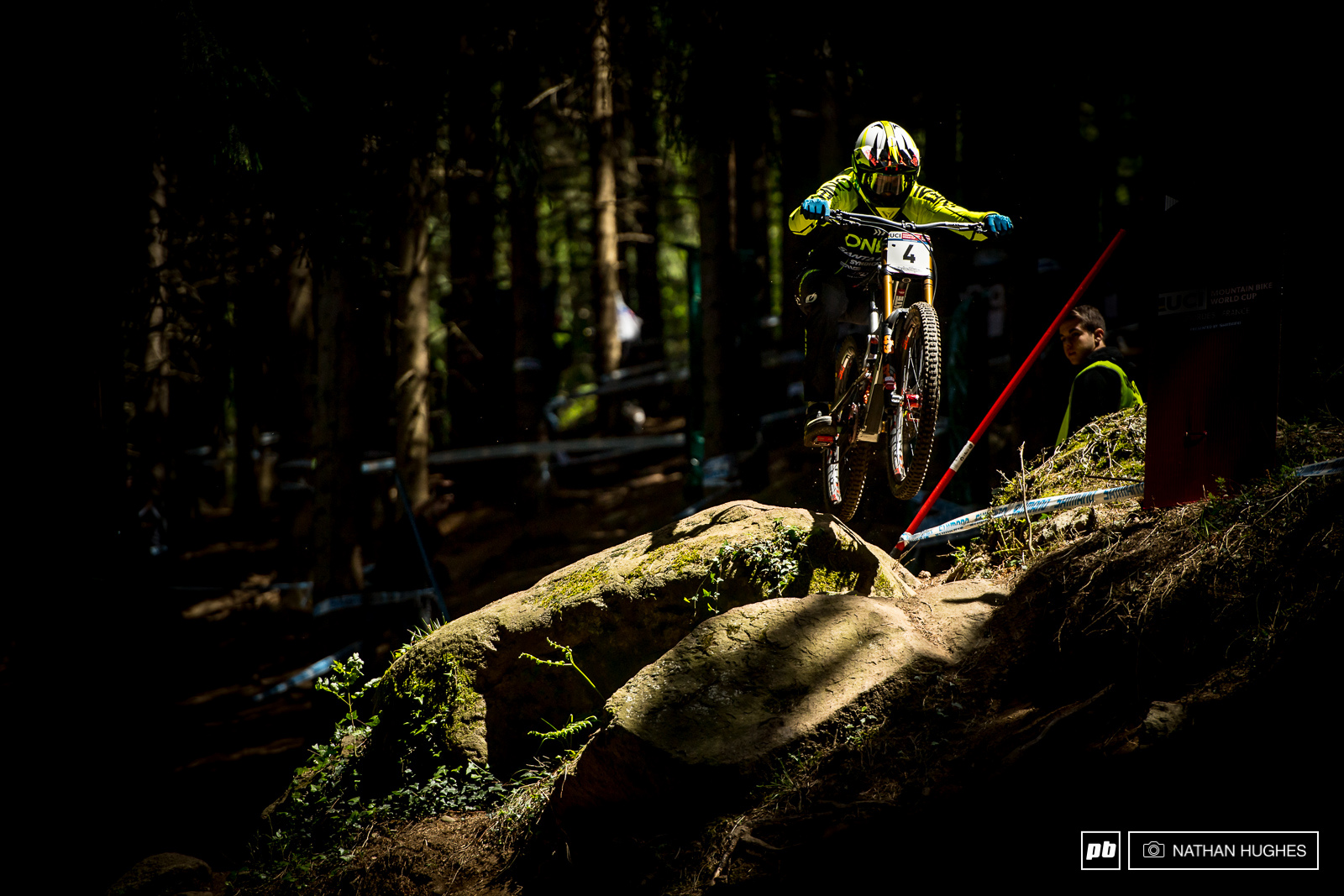 The big wheeling Syndicate were on the march in Lourdes but fell foul of the race day rain. 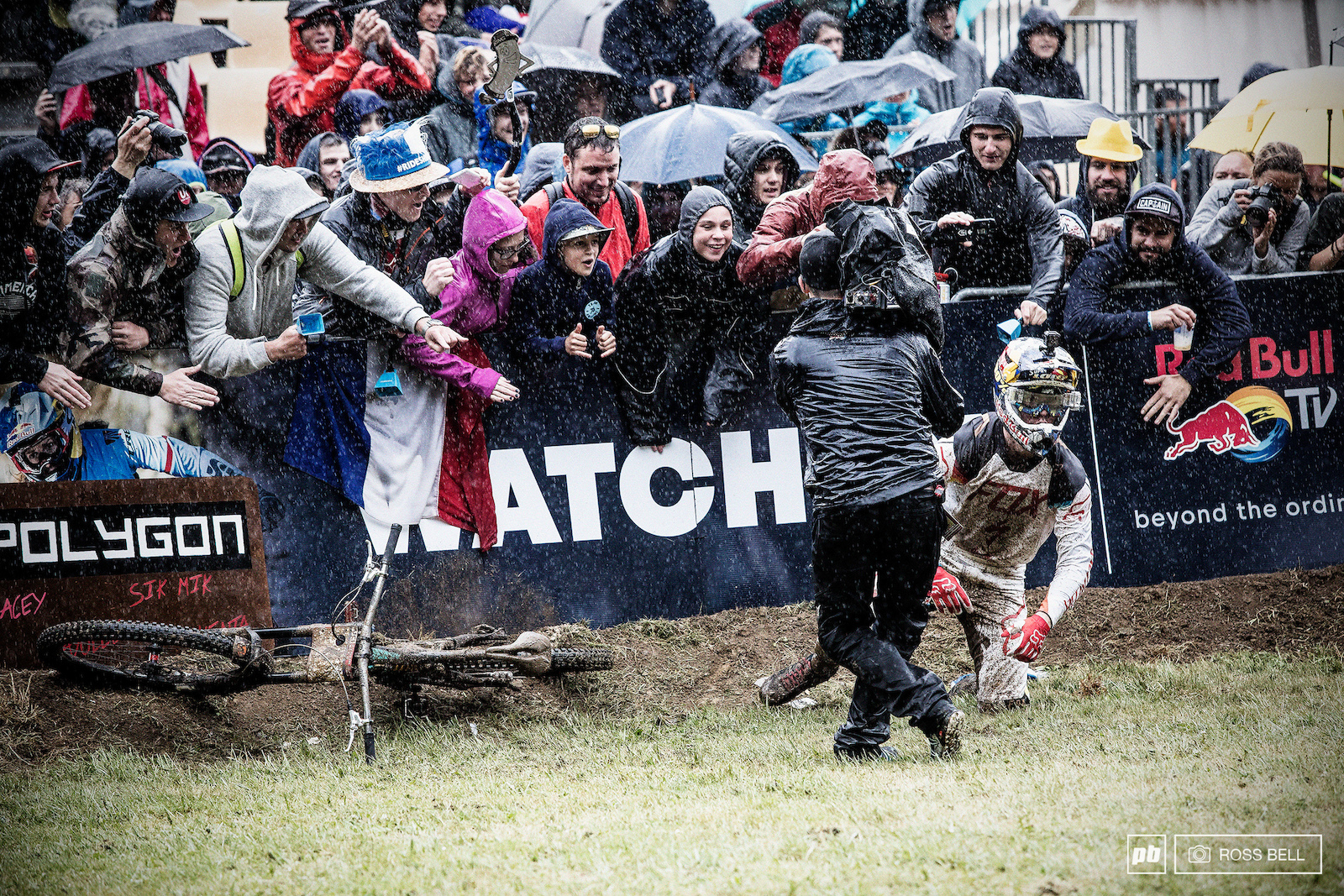 Nothing the top guys could do as they helplessly watched the rain pouring down during their warm-ups. 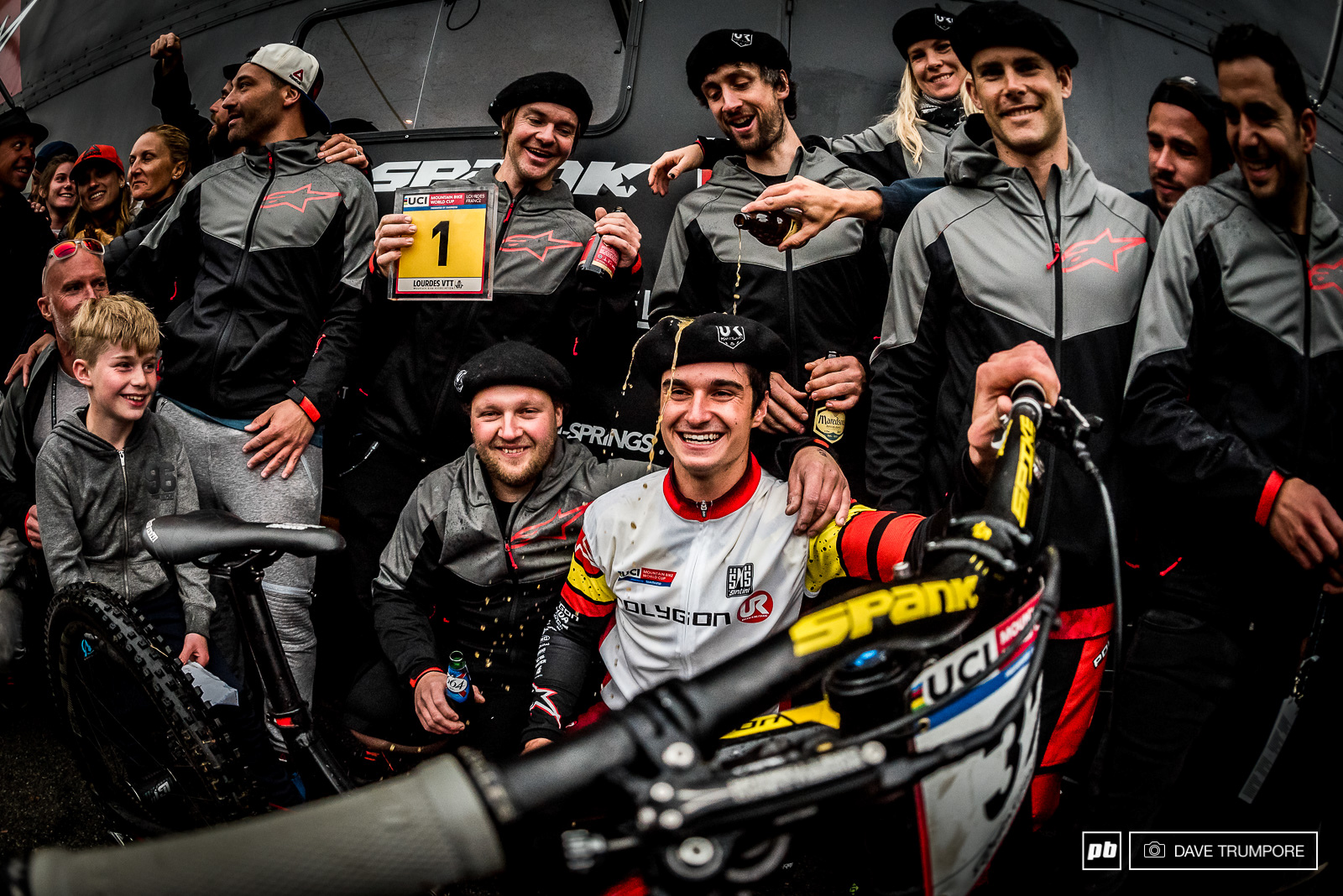 No one could get close to Alex Fayolle before the deluge. Would it have been enough if the rain had held off? 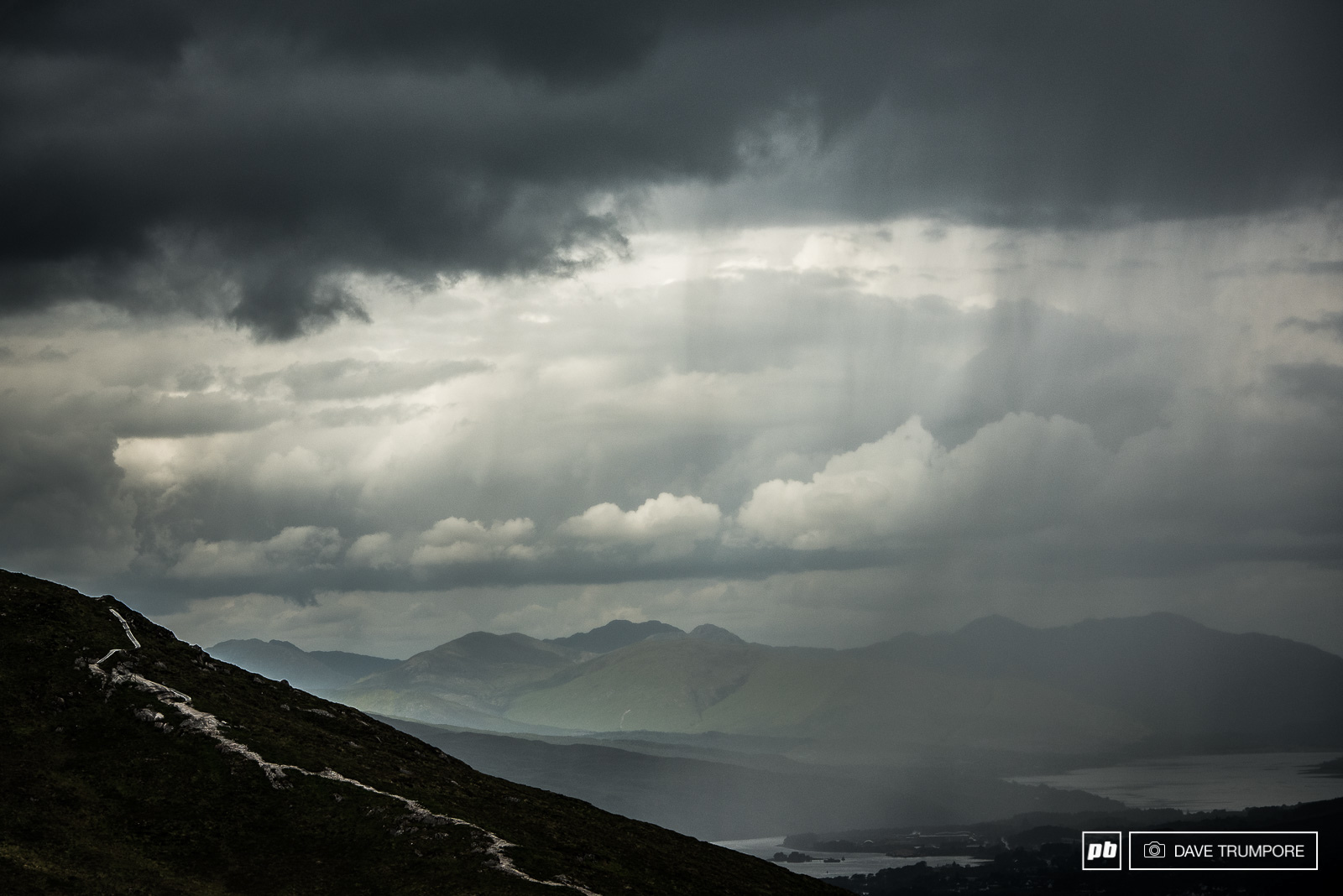 A staple in the calendar, the weathered slopes of Aonach Mor has played host to the World Cup for over a decade now. Two almost-certainties in Fort William are rain and a Greg Minnaar victory, both of which came to fruition but it’s never as plain sailing as it sounds. For years the track has remained the same with little change apart from the woods, this year the track speared off right from the deer fence through some fast and flowing turns before a rock huck and then back into the axle deep ruts and cobwebs of roots and mud. The woods that weekend sparked some intense debate that rumbled on into the next round but not before claiming a high-profile victim in Rachel Atherton. Down and out. For how long? Tracey Hannah seized the initiative and laid down a ten-second margin to second placed Myriam Nicole, there were big shoes to be filled and it looked like Hannah was the perfect fit. It all felt a little deja vu like as with the fastest qualifiers dropping in, the rain began to fall once again. It looked like Gwin had sealed the deal going green on the split times until sliding out on an innocuous looking turn, coulda, woulda shoulda? Who knows, but it would have been very, very tight between he and Minnaar. 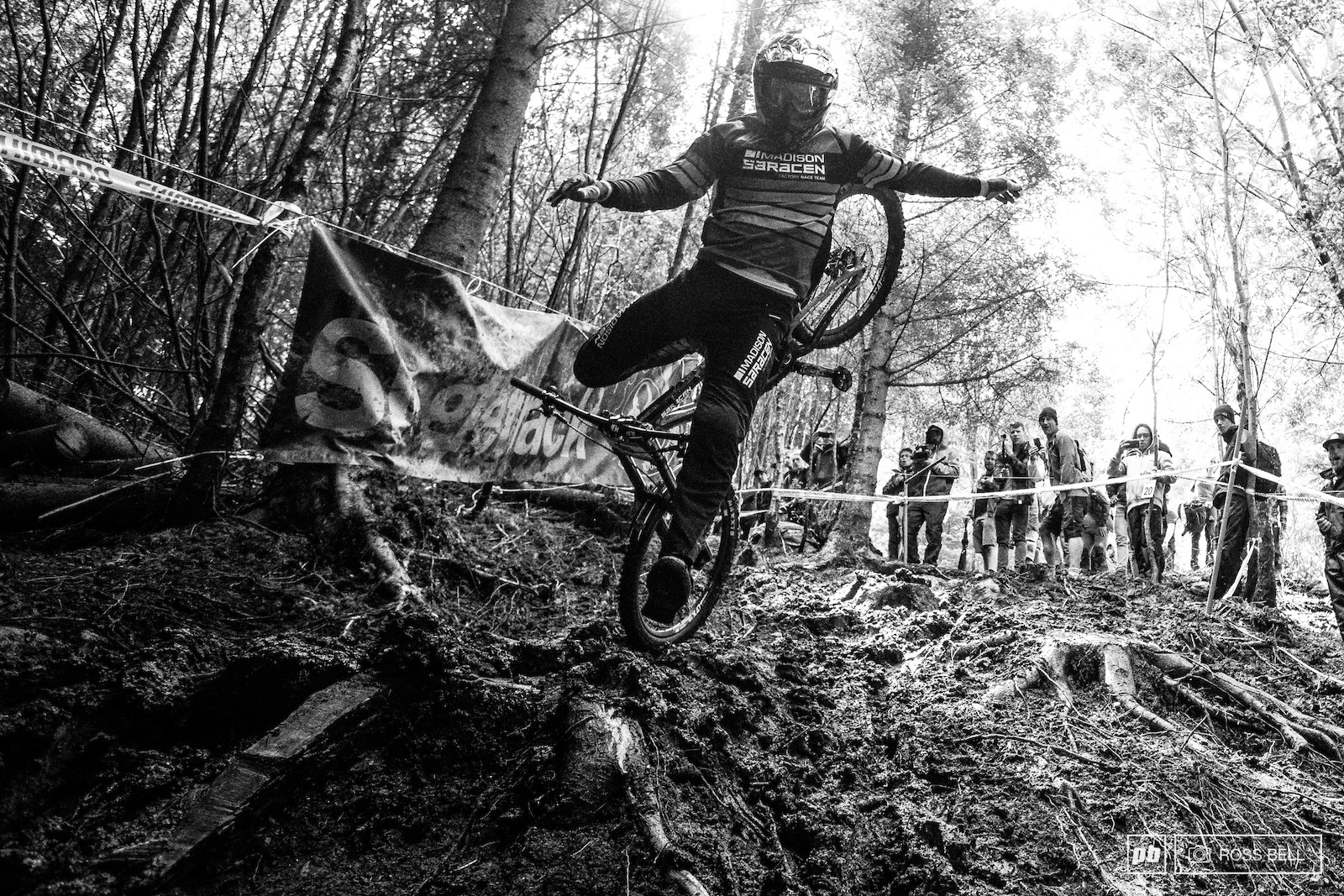 The woods received plenty of criticism over the weekend, with it becoming somewhat of a lottery to make it through upright. 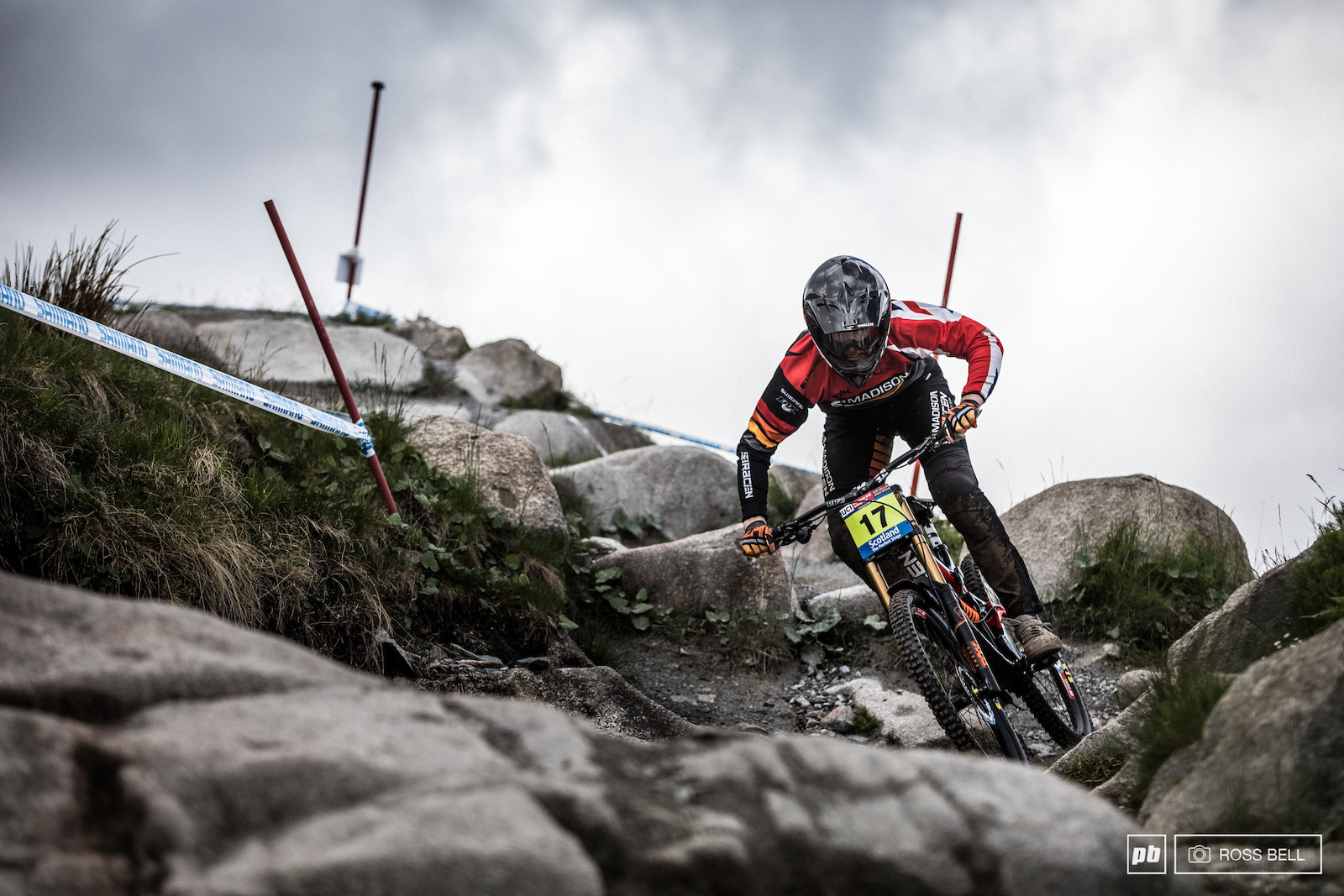 In the juniors, Matt Walker got one back in the battle with Finn Iles. These two will be electric when they graduate to elites next season. 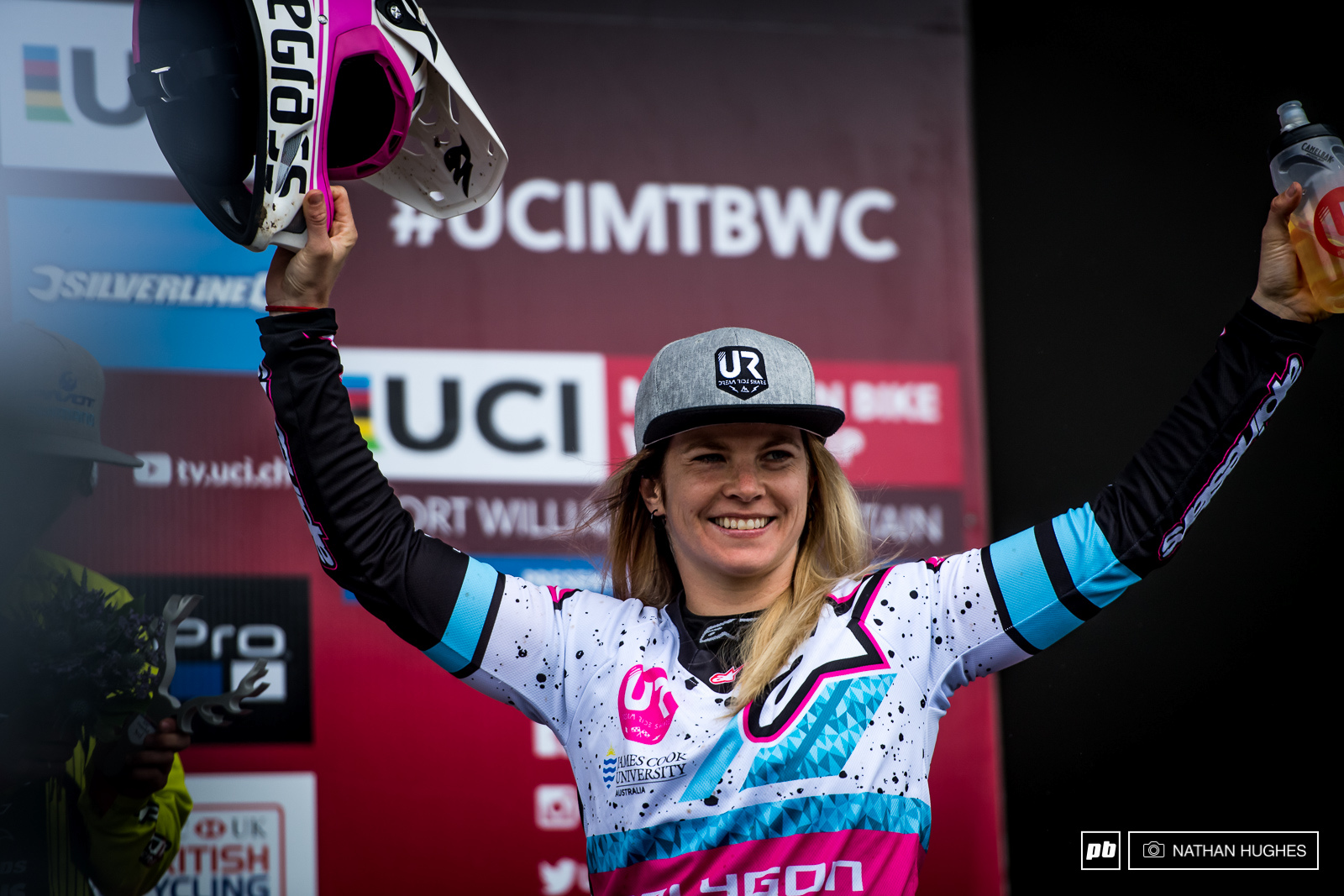 A long time coming, Tracey Hannah steps back on that #1 once again. 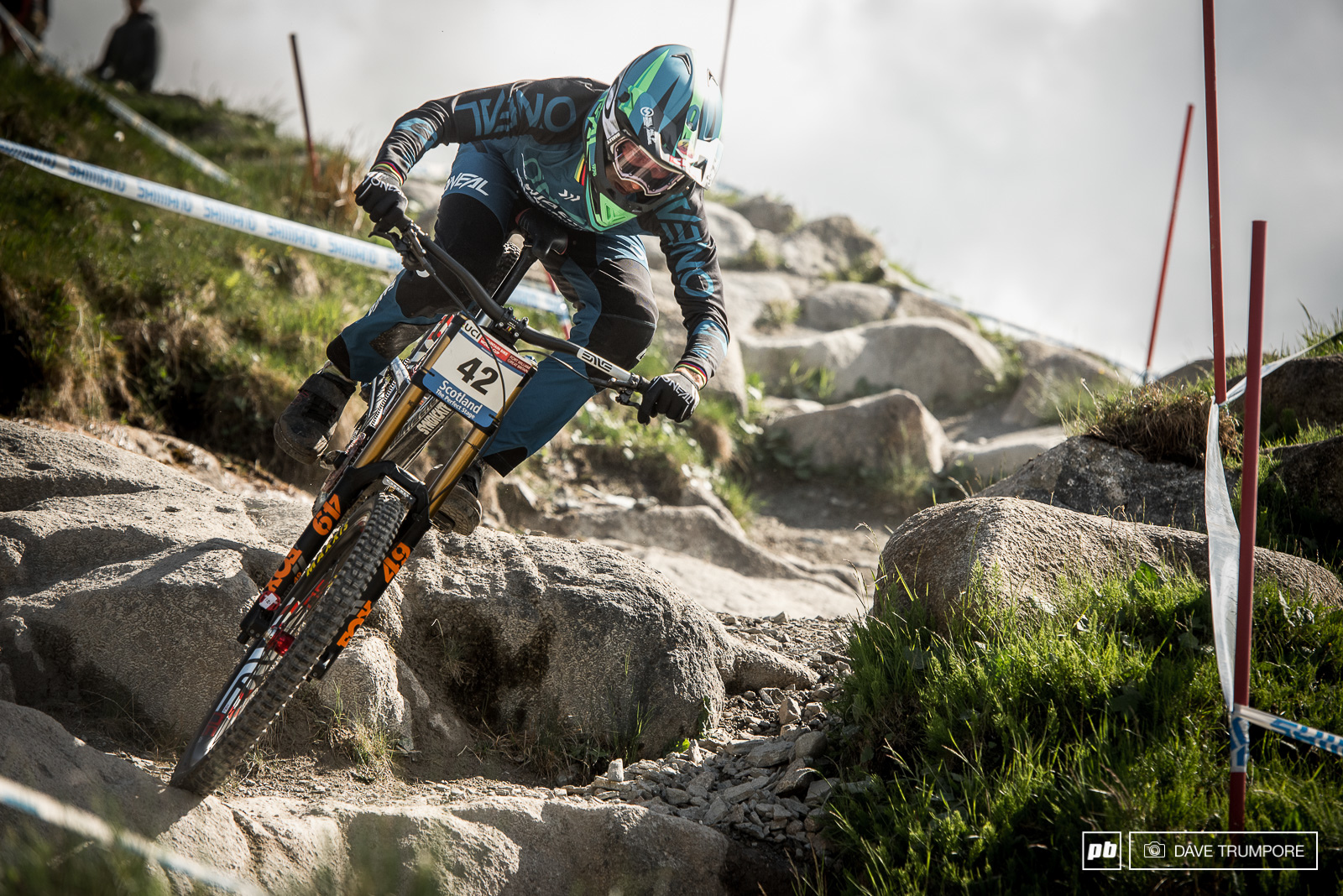 Greg Minnaar has tamed the Fort William beast, unlocking a secret no one else can find the answer to. 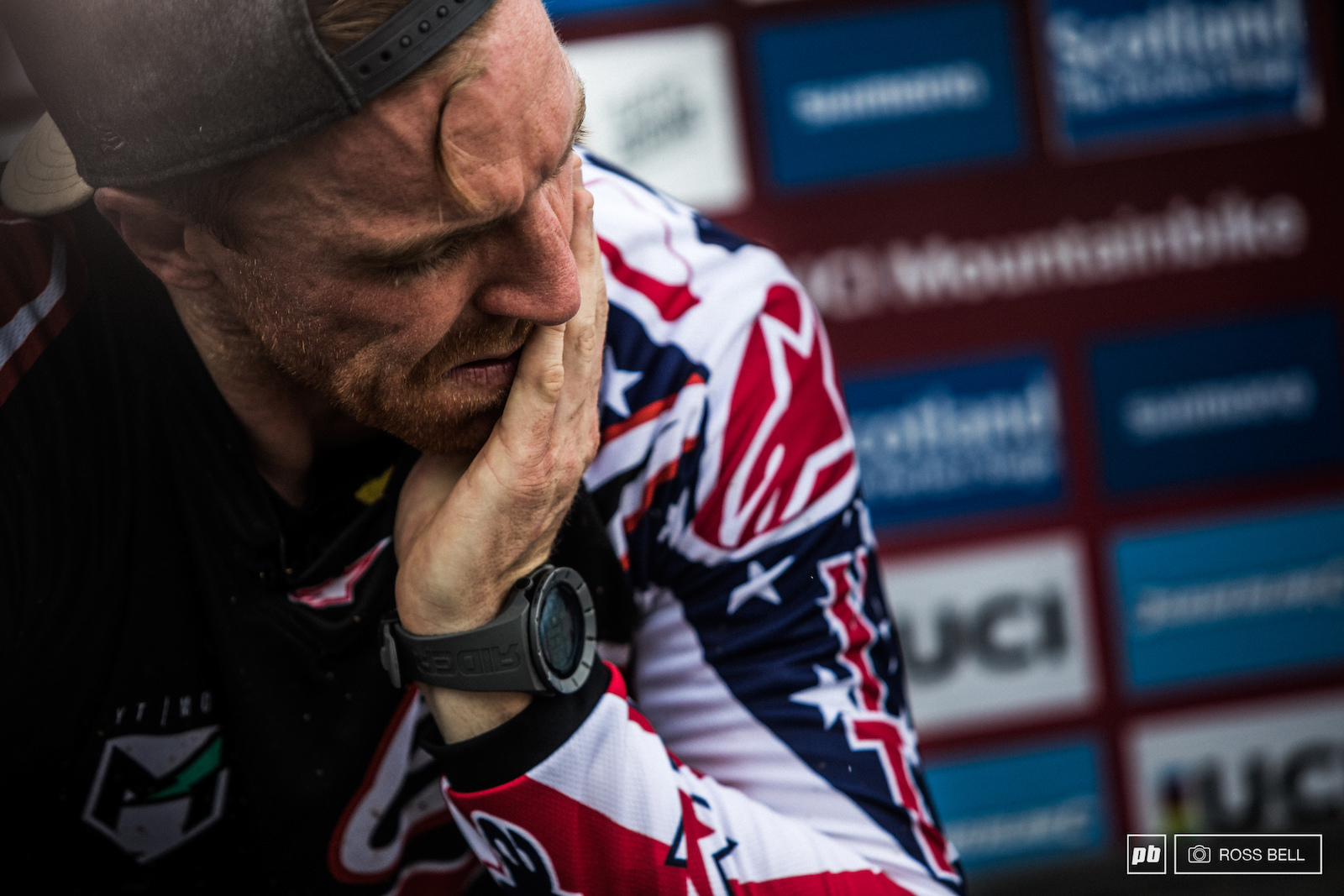 What could have been? Gwin would soon get his redemption. 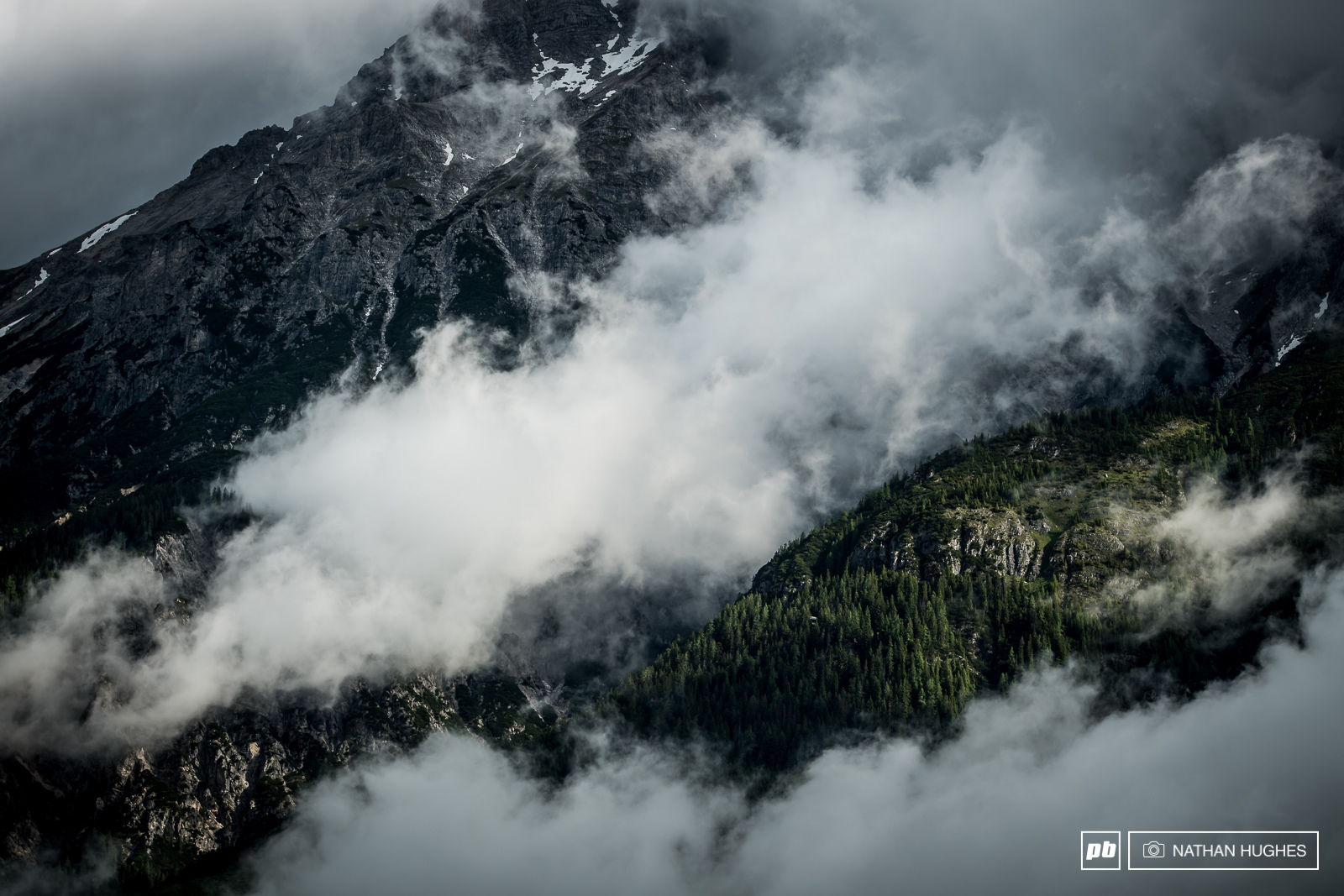 
Bike parky, #NotSchladming, call it what you want. Leogang always seems to produce white hot racing regardless of the gripes and grumbles that murmur through the hills. After a hardtail run by Phil Atwill in practice, things got down to business on a largely unchanged, if not ‘dumbed’ down track. The high speeds claimed a few victims, most notably Remi Thirion who was sucked over the bars on the finish line jump. The result; two fractured vertebrae, a broken collarbone, and three broken ribs. When racing got underway it looked like Tracey Hannah would seal back to back wins after seeing first, but Tahnee Seagrave finally broke her duck and stole it by just over half a second. A long time coming for Seagrave who will want to keep this ball rolling for the rest of the season to try catch Hannah in the overall. Loris Vergier has had blinding pace all season but it simply didn’t come together for him in the first two rounds, however, in Leogang, he got the upper hand on experienced team mate Greg Minnaar for best of the rest behind the undisputed king of Leogang, Aaron Gwin. With that win, Gwin lifted himself into second in the overall behind Minnaar. 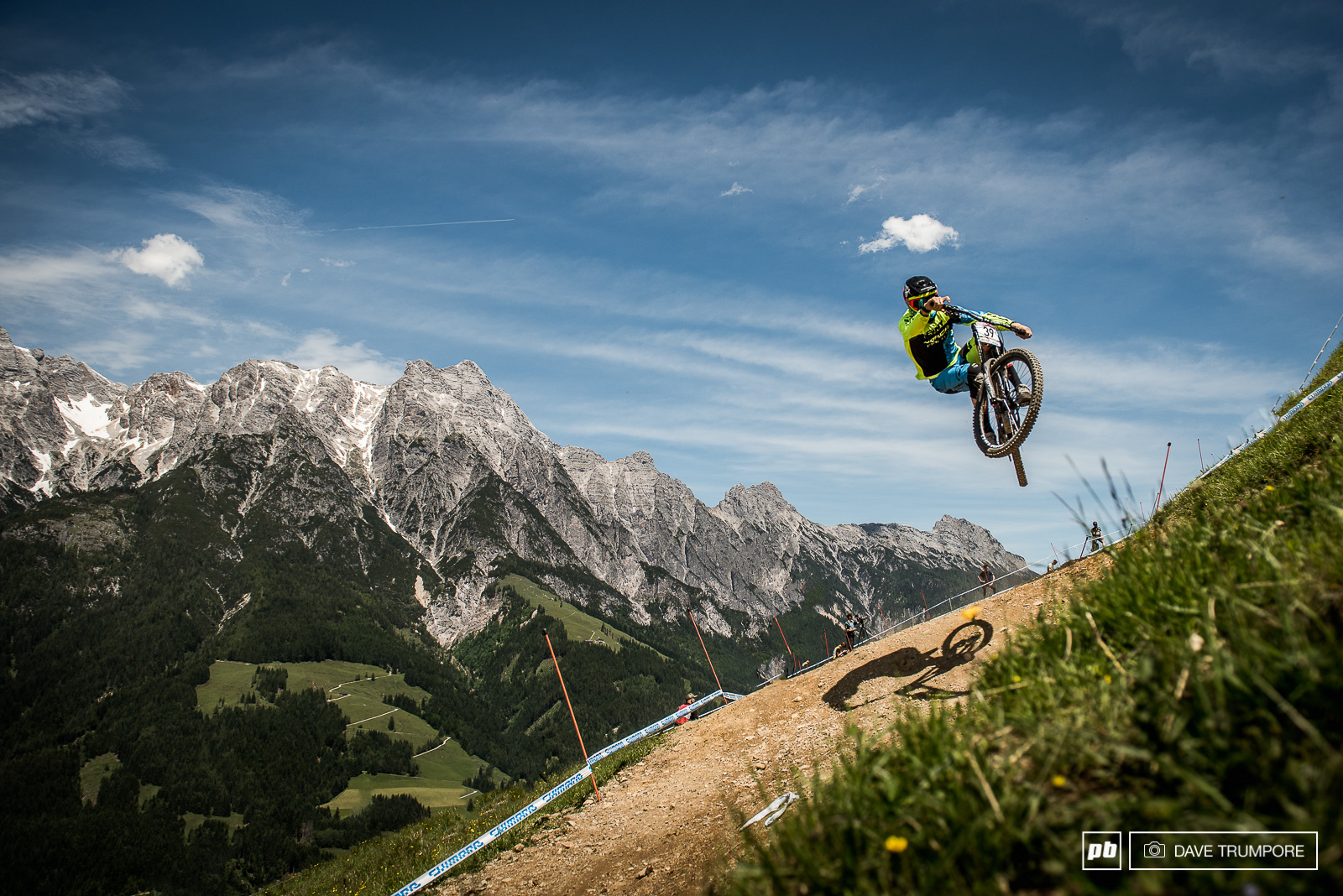 The speeds at Leogang were flat out with the racing to match. Racers called the track to tame and simple but the racing it produced was tight and scintillating. 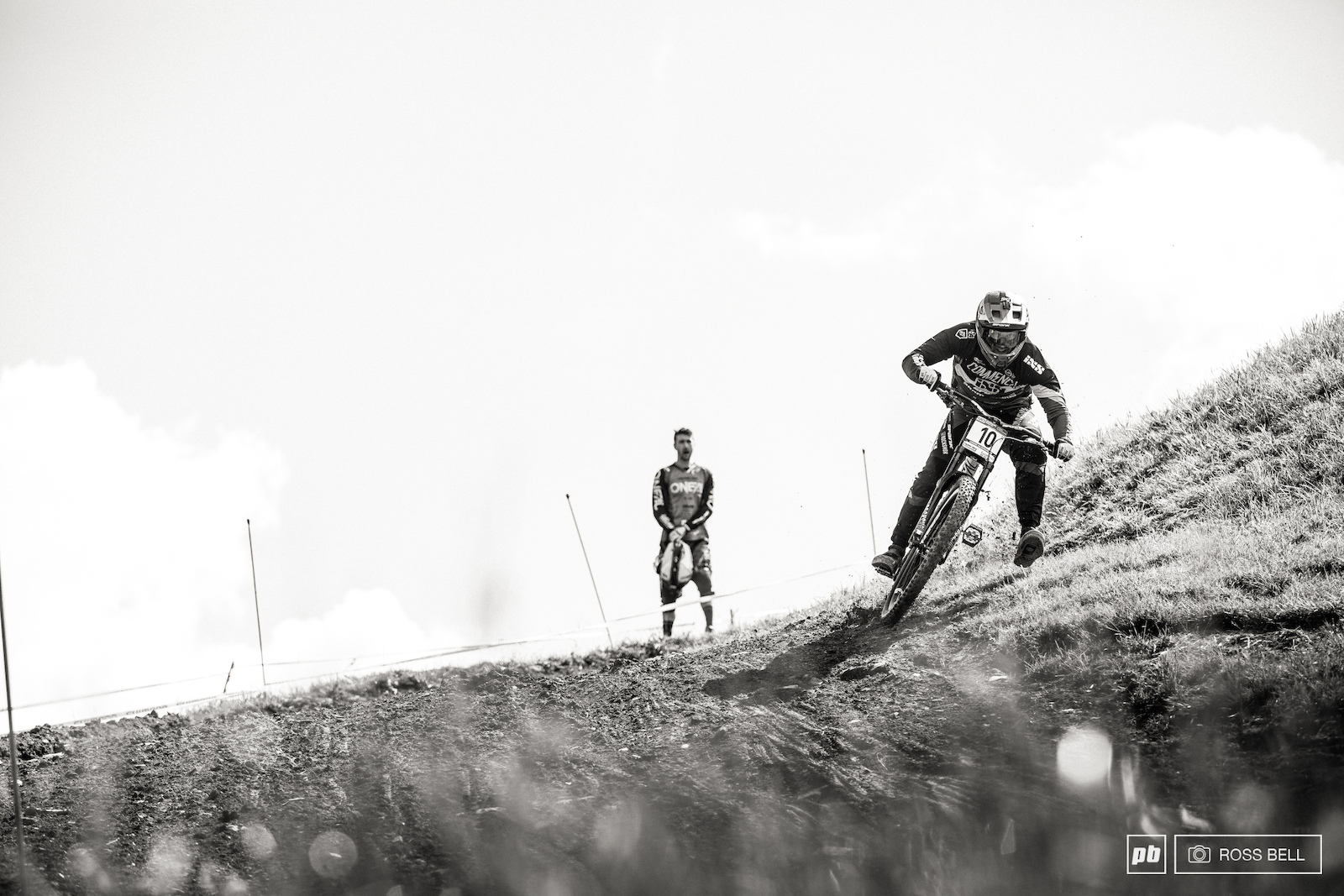 There were multiple casualties from the Leogang weekend, the high-speed track claiming names such as Remi Thirion and Loic Bruni as victims. 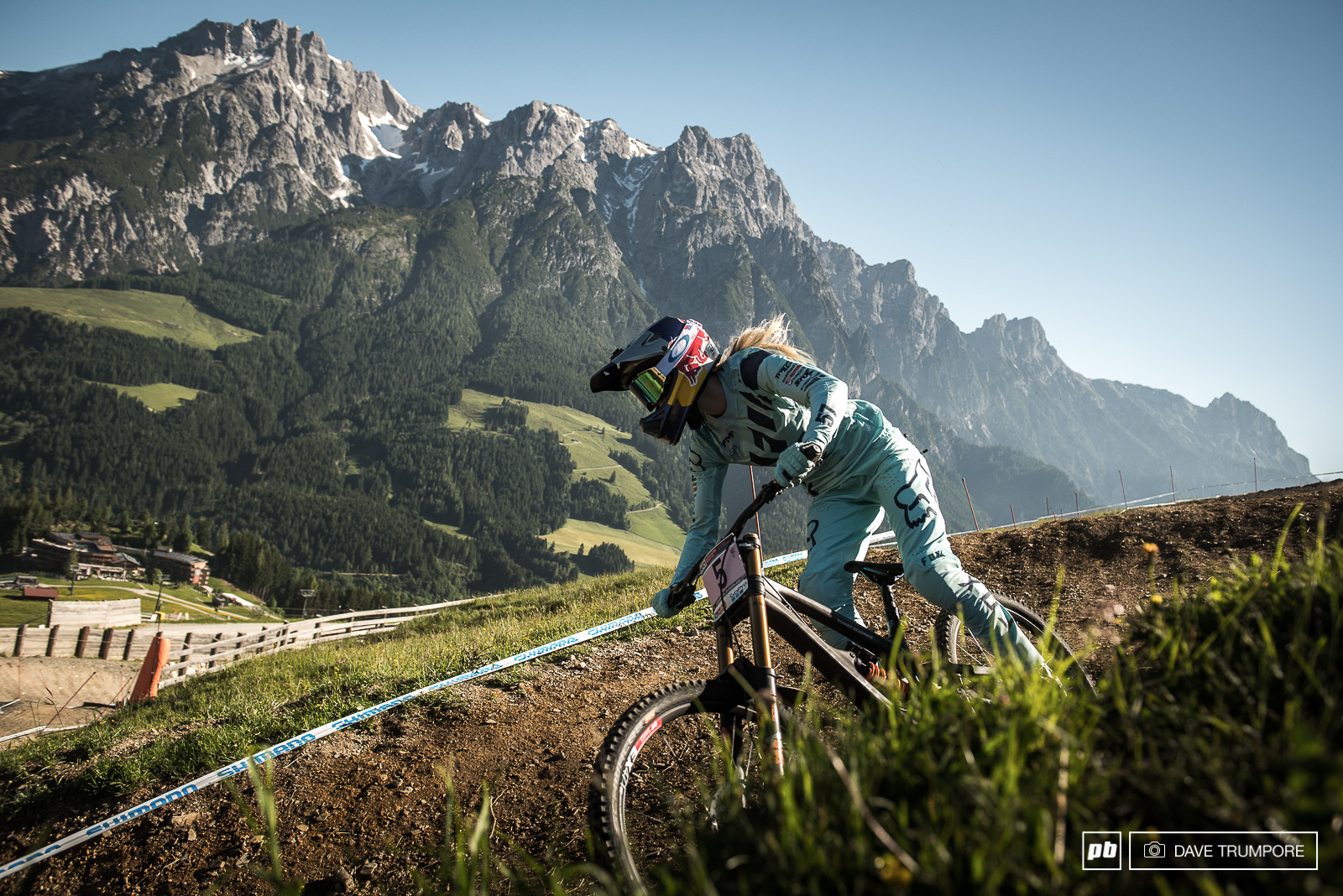 It finally all clicked for Tahnee Seagrave as she rocketed to her first win, where will the new confidence take her? 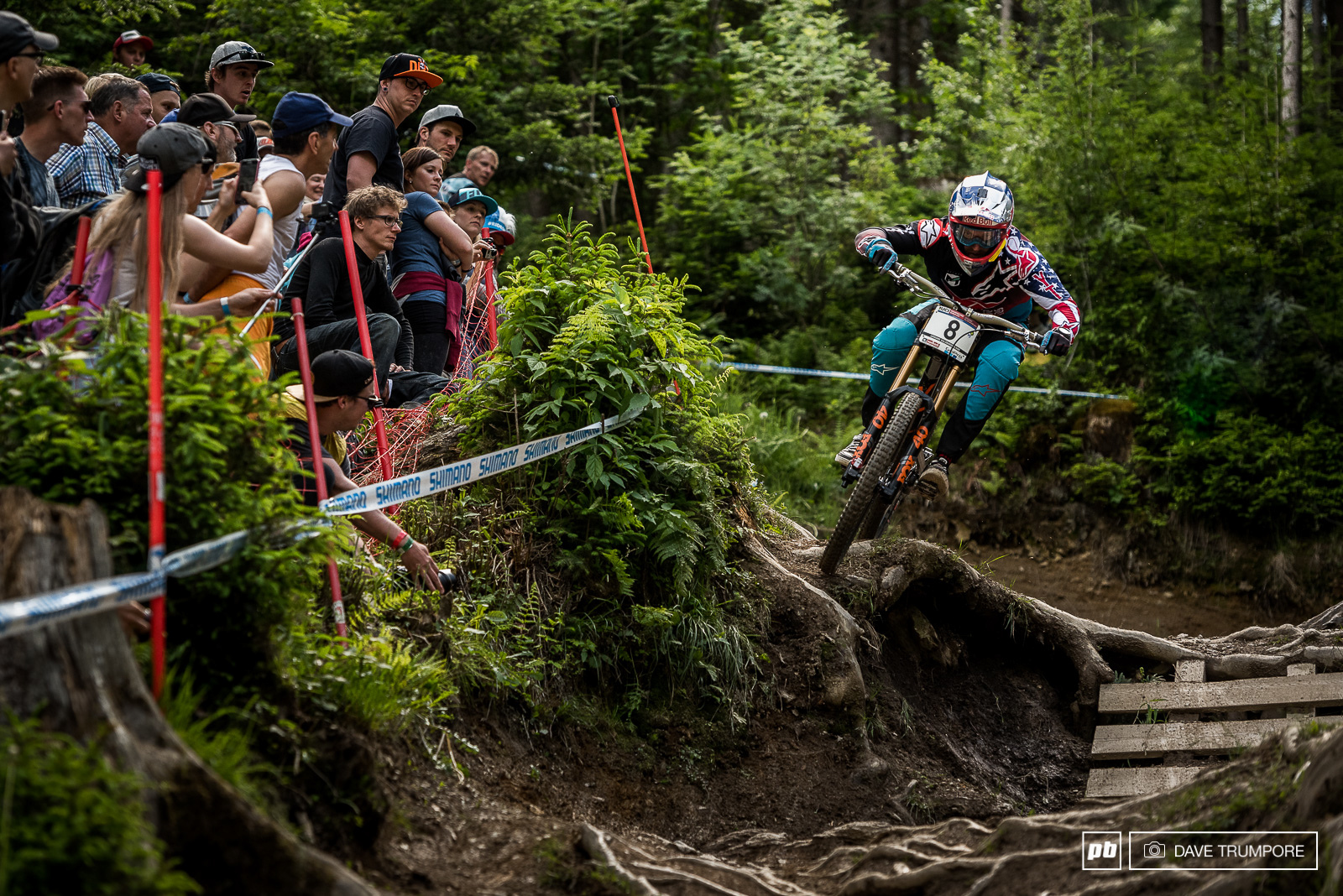 Aaron Gwin is on another level in Leogang, no one can touch him chained or unchained. 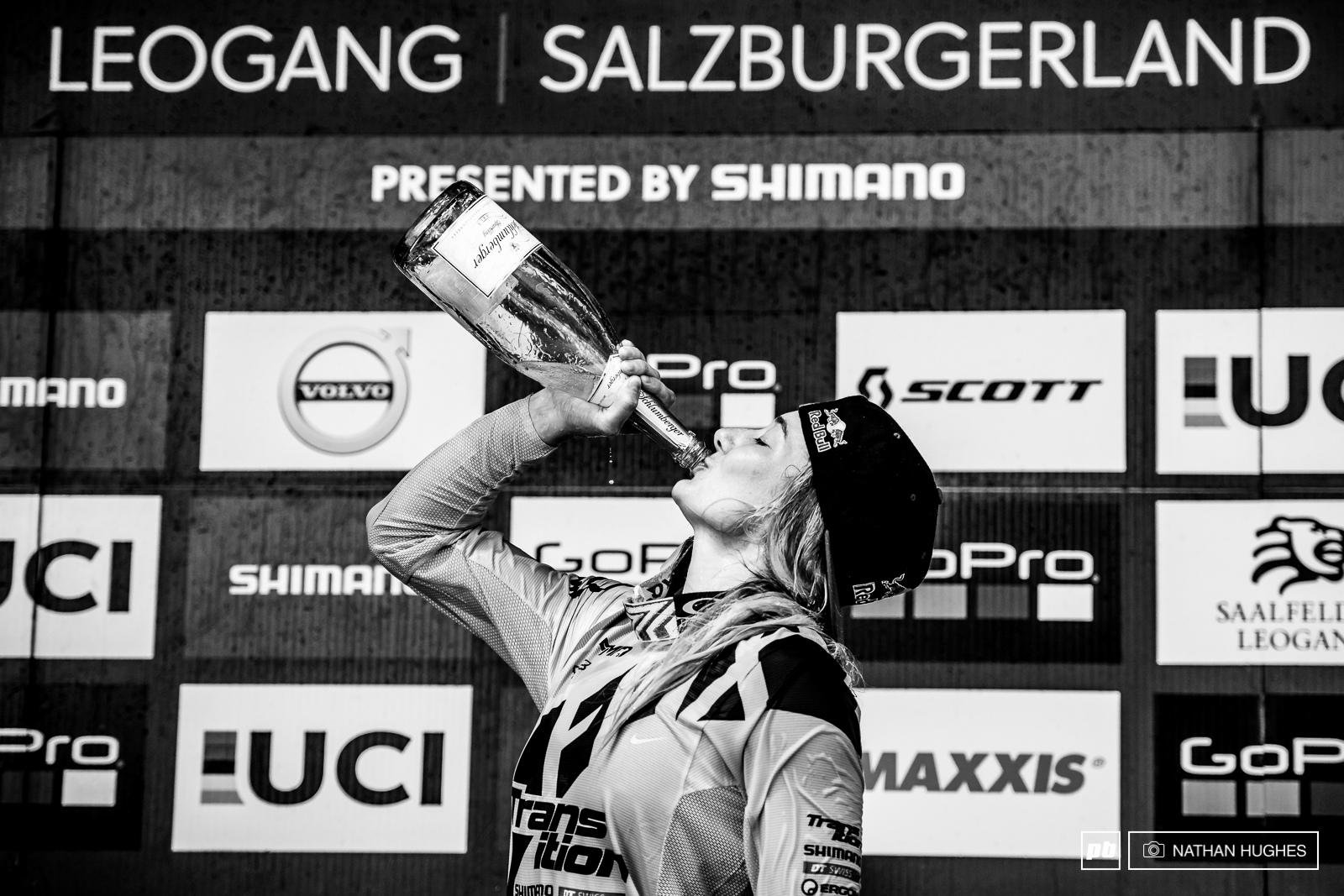 Surely the first of many for Seagrave as she'll begin to eye up Tracey Hannah in the overall.


What’s In Store For the Rest of the Year?


Moving onto Andorra and Lenzerheide with back to back races suddenly the main bulk of the season will be complete if anyone wants to lift their hopes in the overall the next few races are crucial. Myriam Nicole and Tahnee Seagrave are those best set to challenge Tracey Hannah but will need to act on it immediately. When or will Rachel Atherton return this year? Her overall is certainly over, but race wins and World Champs will be her goal if indeed she returns. She could act as a friend or foe to the title protagonists… 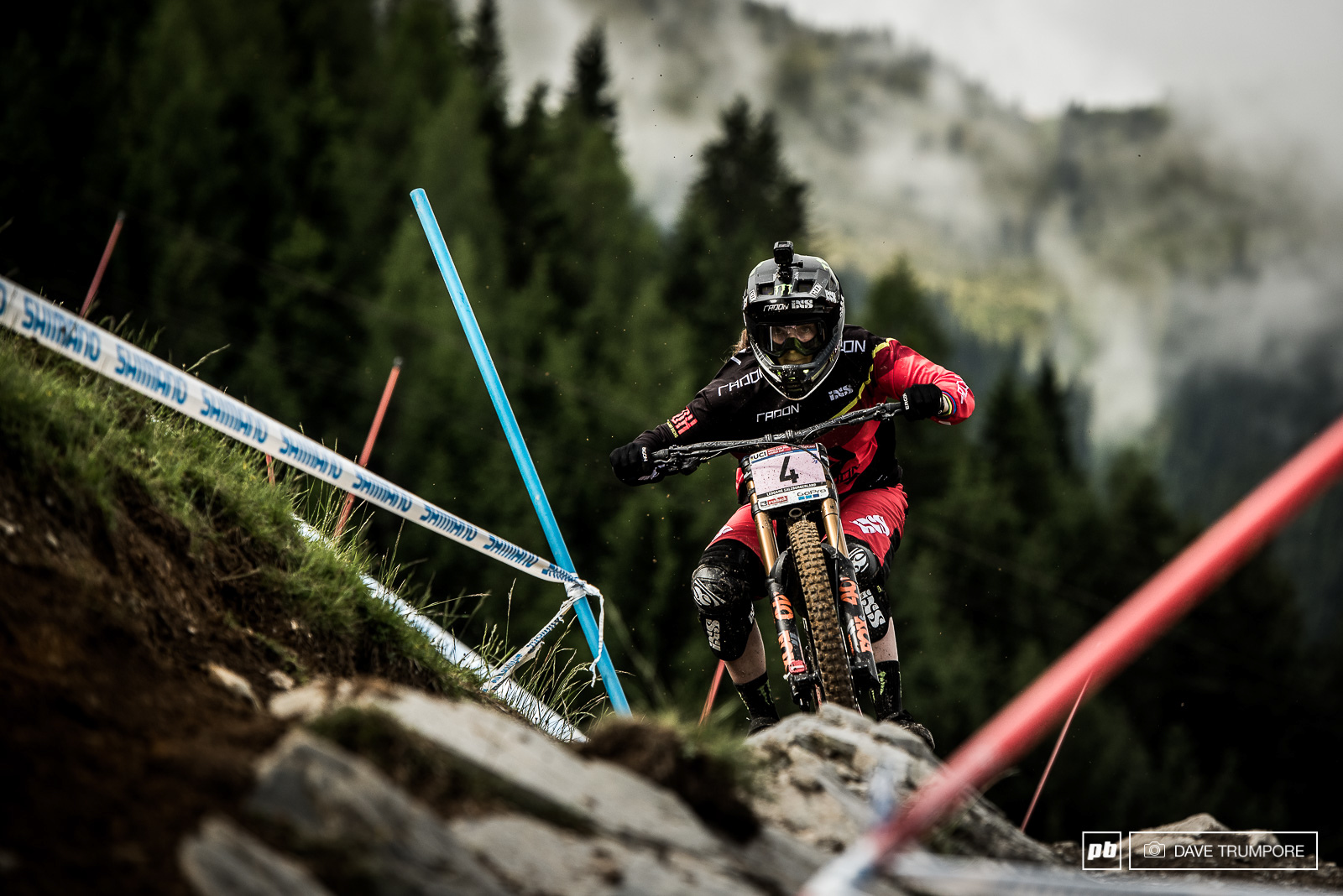 The racing is tight in the women's category, there's plenty to play for. Manon Carpenter will eye a climb up the podium and standings. 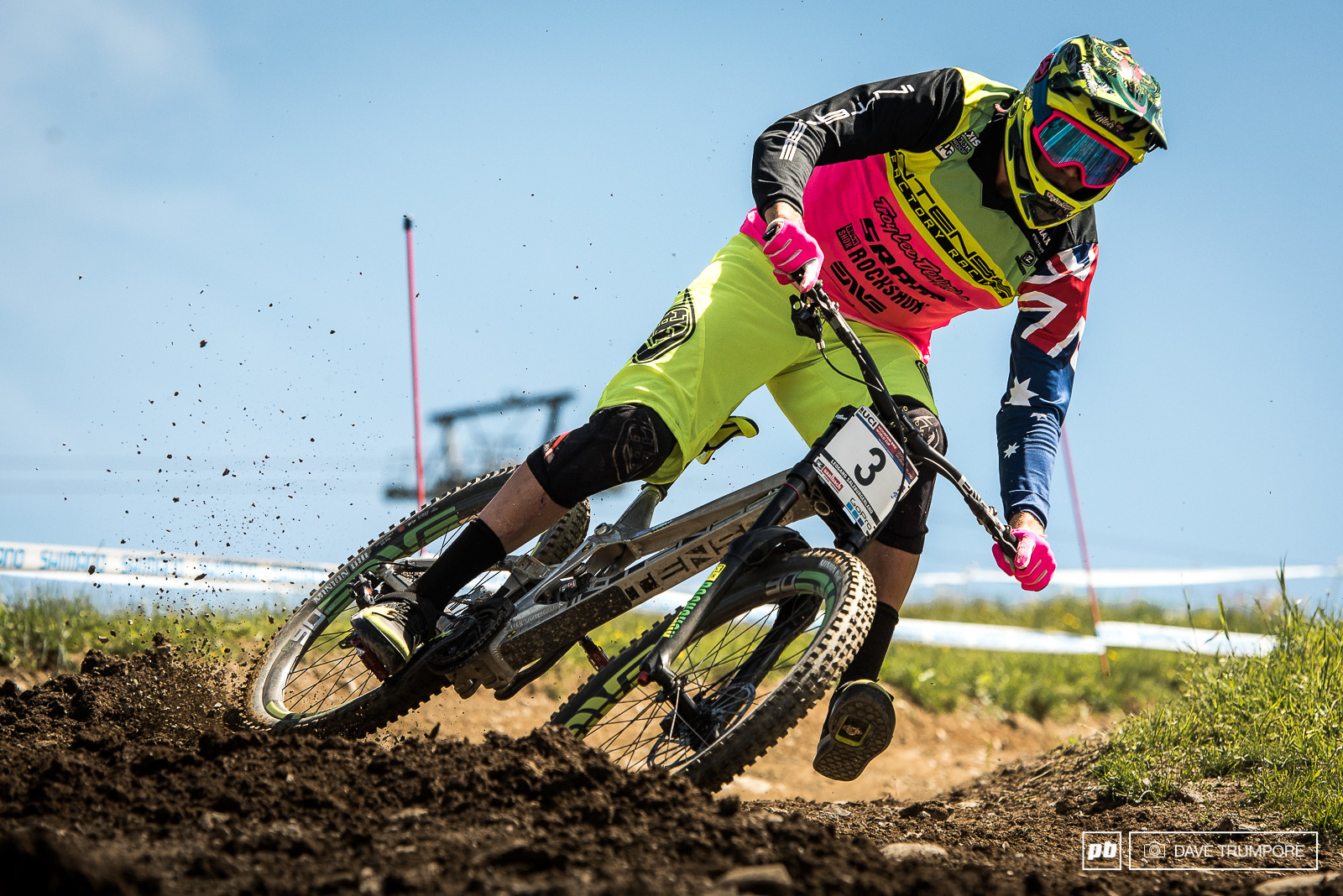 There are plenty of racers itching to get in the fight for the #1 spot. 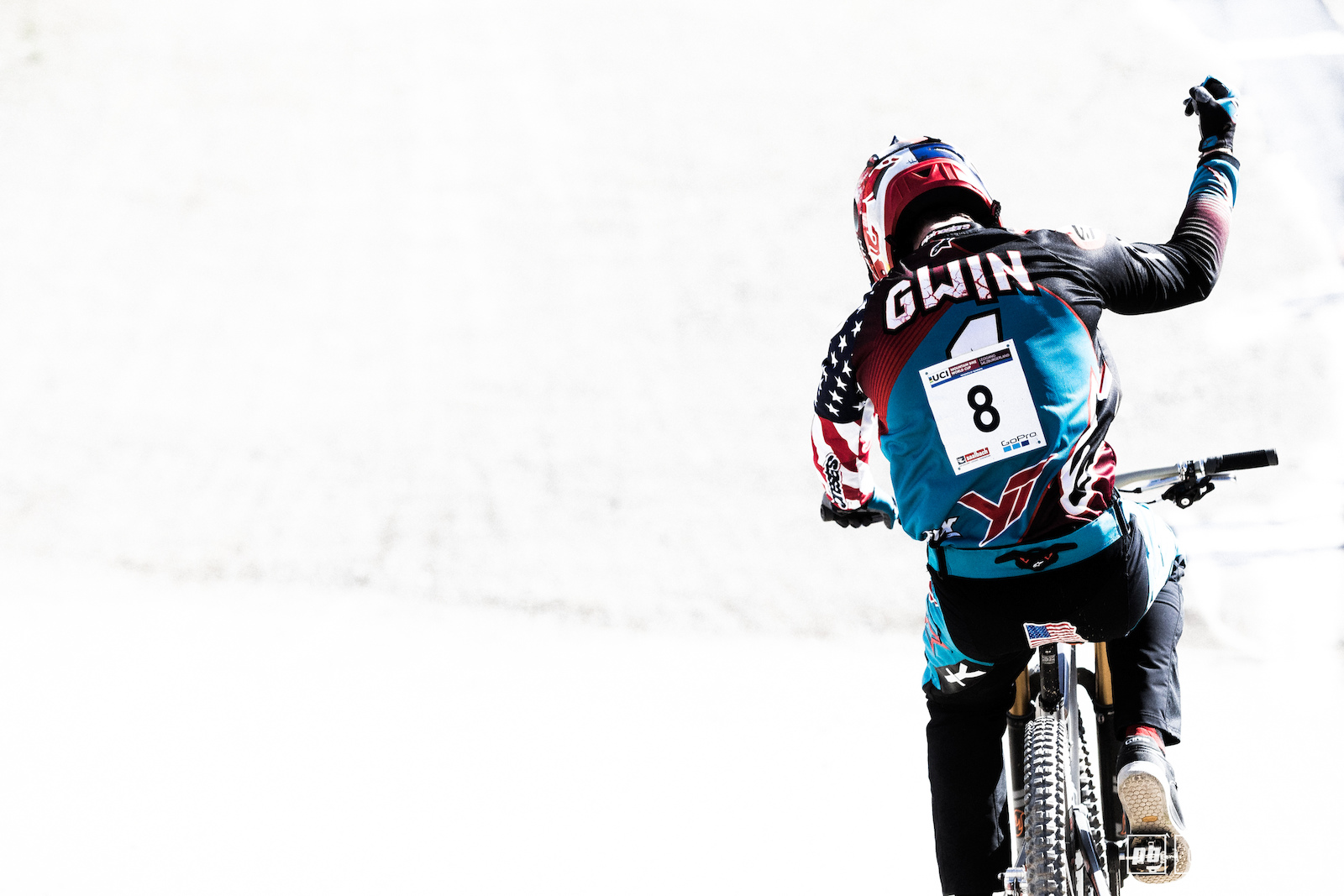 Has the momentum swung in Gwin's favour? Andorra is the next clue in a very intricate 2017 season puzzle.

Looking at the men’s it’s hard to see past the Gwin / Minnaar tussle. They’ve been at the top consistently so long and both are all too familiar with what it takes to string a winning season together. Can anyone else get a look in? Moir? Gutierrez? Vergier? It’s looking like an uphill battle but last year Danny Hart almost closed a substantial gap to Gwin with a late season surge. There’s still time and as we’ve already seen the weather, mechanical, and injuries can take you from hero to zero in the blink of an eye. Hold onto your hat, here comes a volatile second half of the season!

Boardlife69 (Jun 26, 2017 at 23:57)
@nuttypoolog: how the f*ck has Gwin let you down? By not winning Every.Single.Race? Sorry but that would make mens DH as boring as the womens. Gwin has been on top Every.Single.Year dumbass.

hamncheez (Jun 26, 2017 at 15:54)
honestly I'm a big fan of Gwin and Minaar; would be stoked if either won the overall. Hell, I'll be stoked if any of the top riders win. All the top guys are class acts with incredible talent and work ethic.

I'm sure most the riders on the circuit are as well, but I'm only familiar with the more famous ones.

Ride12 (Jun 26, 2017 at 20:24)
I'd love to see the overall go to Minnaar just to add to the already living legend he is. At the same time, I'd love to see young guys like Moir and Vergier win their first race. What's for sure is that World Cup downhill racing is fun to follow!!

mtbikemccoy (Jun 26, 2017 at 22:16)
I gave you a + because I like your excitement! Sadly, you're a bit too optimistic. Gwin is only stoppable by the lord, and he may or may not want him to win. No reason to cheer for him!

yerbikeiscool (Jun 27, 2017 at 0:25)
I would like to see everyone win, and at the end of the season all join hands and dance around a rainbow. You a special, I am special, everyone is special.