Read on inside to learn how the whole day unfolded and to see who your top 15 riders are for the finals! 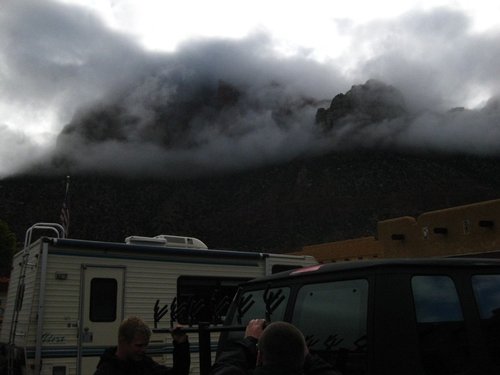 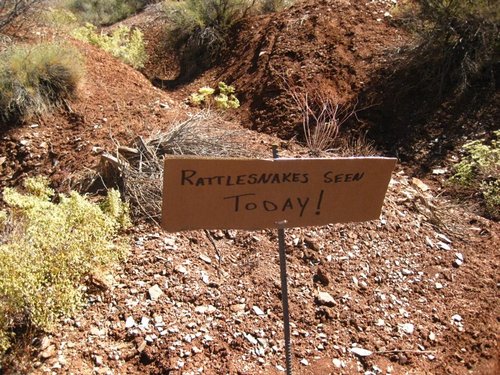 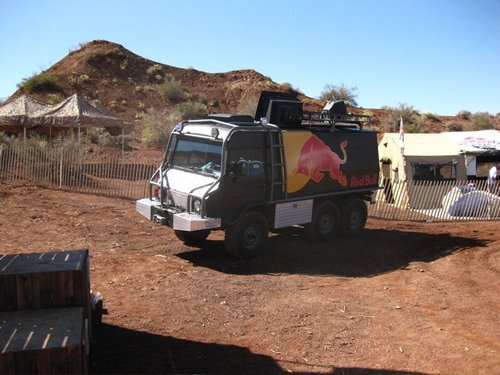 We woke up this morning expecting rain and wind. The exact opposite happened, with clear skies and calm breezes instead. I received an email around 8 am, telling us that everything was a go. There were some changes though, with everyone getting a single run only to determine the line up for the finals. The finals were to start around 1pm instead of 10 am. We got in as soon as we could (the road was closed to 2wd vehicles) and immediately headed up to the line Brandon and I had been building all week. While Brandon sessioned the course, I carved out a run out, so he could get back into the regular line. Again we were hoping all our hard work would pay off with the judges, our chances got even better when we found out that they would be seated a mere 50 feet from the bottom of the run out. Around 11:30 Brandon showed up, rolled in and hit the line perfectly first try, falling about 20 feet to the landing. He came screaming out with a ton of speed, and right away ducked back into the double drop and disappeared. 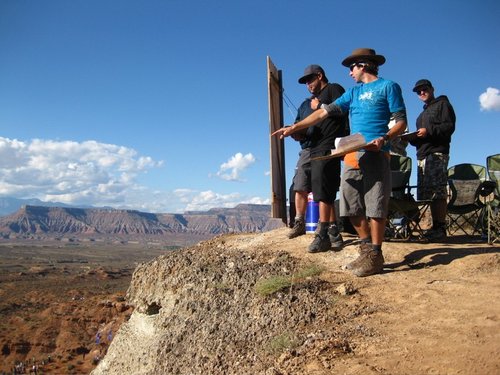 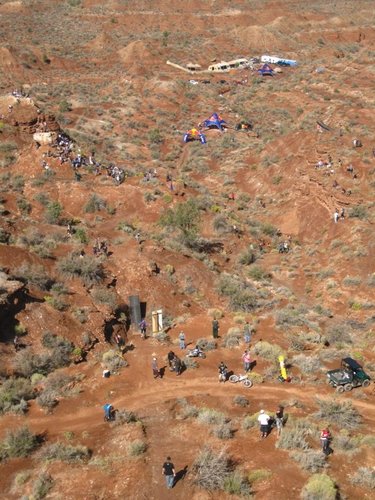 The view from above

I had been working on the drop so intensely all morning that I had not paid attention to anybody else's riding, as I looked up there were riders everywhere practicing and putting the finishing touches on their lines, mere minutes before the contest was supposed to start. The announcing team of Aaron Chase and Brad Ewen demanded that everyone head down for a quick riders meeting around 1, so we all packed up and hiked down to the bottom. The format was laid out, that everyone on the rider's right line (ridge 2) would go first, with the rider left ridge (ridge 3), going second. As the riders started hiking up to the course the film heli showed up and set the mood for the rest of the day. 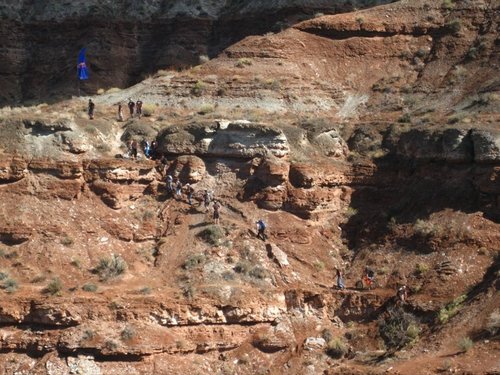 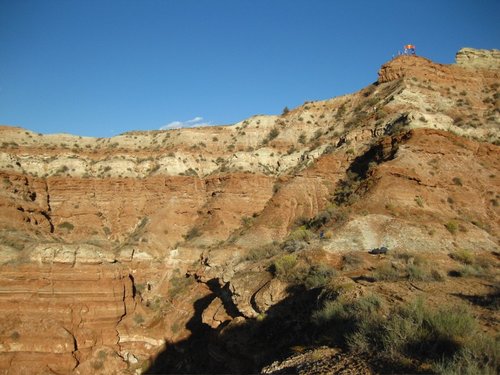 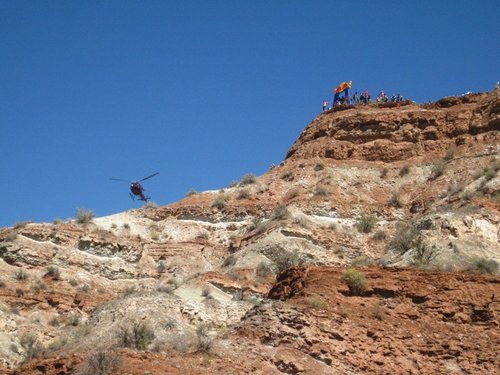 Heli capturing all the goods

The first rider out of the gate was local racer Logan Binggeli, Logan pinned it through with a super smooth run down Ridge 2 double drop to gap line. This was a sign of things to come, as this line was used by Mike Hopkins, Mike Kinrade, Darren Berrecloth, Alex Pro, Graham Agassiz, and Thomas Vanderham. Each of them had some small changes to the top half of their runs, and the bottoms were mostly different. From a judging stand point it must have been a challenge, as half of those riders listed made it, and the other half were eliminated.

James Doerfling had a creative line with a triple drop set up that ended with a gnarly hip drop to mini canyon gap. It was a super rad line that he deserved to nail after numerous crashes on it in practice. Kurt Sorge was 2nd up, and was he was the only rider to charge at the 50 foot hip step down at the very bottom of the course. Kurt rode away clean and was awarded with a qualifying spot for his gutsy riding style. Garret Buehler rode a cool line off the ridge that led into a couple drops, but had a couple falls. Bad luck for a good kid. After all the riders from Ridge 2 (riders right) had finished their runs, there was 10 minute break to let photographers and the TV crews transfer over to the opposite ridge (ridge 3) for the 2nd group of riders.

The first couple of runs were put together by none other then Cedric Gracia and Gee Atherton, both being World Cup veterans, they charged the course like a DH race, putting together fluid, and fast runs. Both riders went big, and both advanced. It's good to have some race flavor mixed in with the freeriders. Kelly McGarry was up next, the Kiwi was putting together an impressive run until he went down trying to X-up the big step down that only Gee had stomped so far. He got back up right away and charged into the Gee Step down and Table, he flipped the table out of nowhere, surprising everyone on the hill. One of the loudest cheers from the small-ish crowd came for that move. 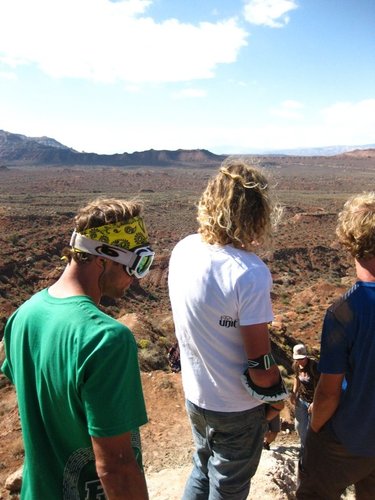 After Kelly came down, one of the more unfortunate moments of the day was when Matt Hunter hit the step up hip, and on landing his shoulder popped out. Hunter always seems to have the worst contest luck, hopefully his luck with change soon because he's an awesome rider, with one of the best attitudes in the sport. After the small delay for the medics to get down to Hunter, it was Cam McCauls turn. Cam laid down one of the most sold runs of the day, no handering the second drop in the double drop line, and flowing smoothly throughout. He was rewarded with the best score of the day. Decent consistent runs were laid down by Paul B, Geoff Gulevich, Guido Tshugg and Kenny Smith. Paul will be advancing. After Kenny, was Kyle Strait, who rode super stylish all the way down to the bottom, where he creeped into his double drop line that him and Zink built. It is super hairball and the sketchiest line on the course for sure. Kyle will be riding on Monday. Solid runs were laid out by both Dan Atherton and Robbie Bourdon, they both rode different lines than most. Both of them will also ride Monday. After Dan, was Chris Van Dine, Chris is one of the best dudes in the sport, and is always sending it hard. During his run, he got a bad gust of wind and took a big body slam on the big step down on the ridge. He was out of it for awhile but he'll be OK. 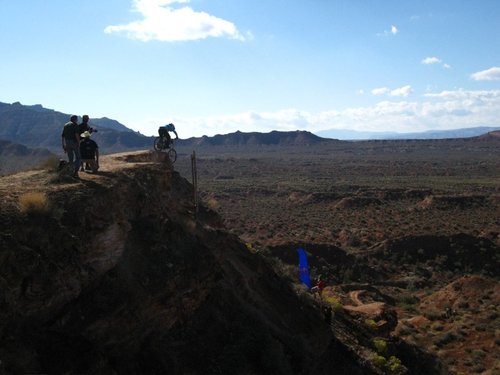 The next rider up was Brandon Semenuk, he was hitting the ridge into the line he and I built. I couldn't be more excited at this point to see the reaction the hip drop we built would evoke. As he rode out of it, the small cheers from the crowd way below accomplished it for me. It's super awesome being able to see something that we've worked so hard on come together. The judges rewarded Brandon with the second highest score in qualifying. It made all the hard work easily worth it, without it he would have been back around 7th or 8th for sure. After Brandon was Cam Zink, who chose to emulate his good buddy Kyle Straits run. Zink nailed the double drop that took him out in practice, and ended up being rewarded for it with a qualifying spot. The final rider on course was the Czech rider Michal Marosi, he rode smooth and calm the whole way down. He'll be riding Monday as well. 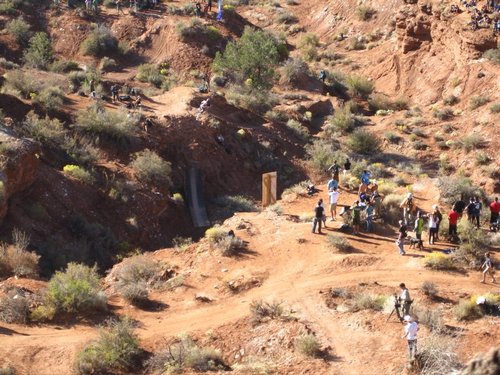 Here are shots from practice and qualifying to check out: 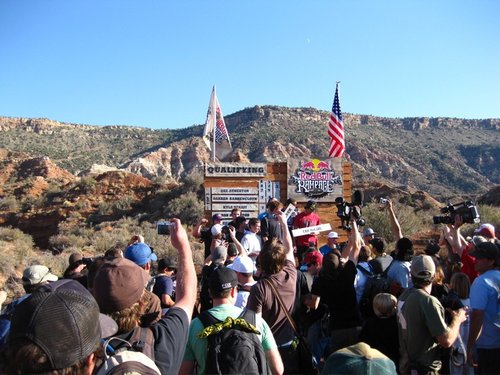 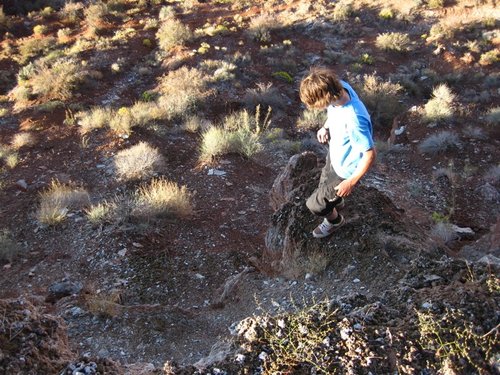 After the results were announced, we pinned it over to the finals side, to start building what we hoped will be another creative line for Brandon to stand out once again, with the hopes of a solid podium finish. We dug a billy goat creep line into a step down until it got dark. We'll be back out at 7 am, to finish it off, as practice starts at 9:30 and the finals run shortly there after. Hopefully it will be another awesome day. This contest is the best contest in mountain biking, there is the best vibe, and some of the coolest riding ever. It really proves that mountain biking is the most versatile two wheeled vehicle in the world. None of what is being done out there can be done on a BMX or a moto. This is mountain biking. 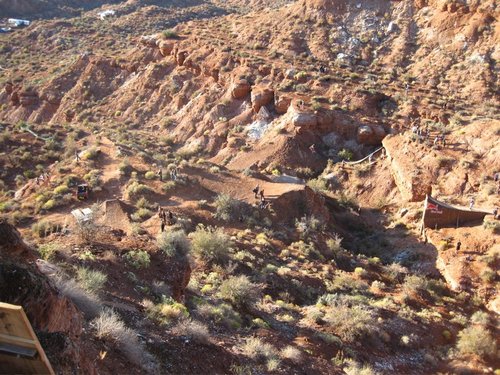 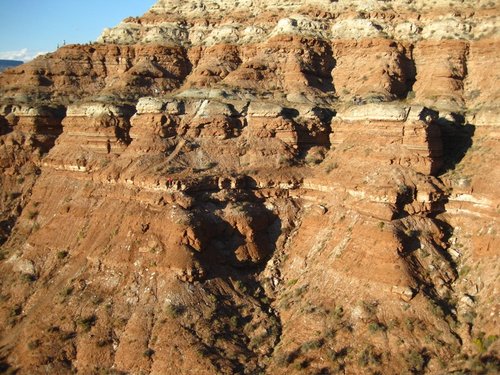 This is where the final's magic will go down 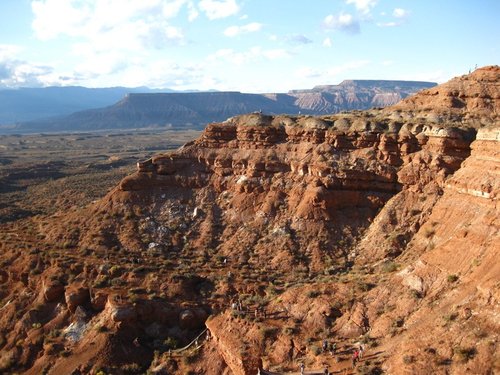 And some of you thought this would be a slope style

mad-mk (Oct 6, 2008 at 9:52)
second that, but the vid from the bicycle rockers on pinkbike offers more of the atmosphere in utah..

pbdsolutions (Oct 6, 2008 at 12:27)
was is just me or was everyone riding better when they got rid of the crappy rap music and put some good old lynyrd skynyrd?... nah jus kidding, sweet riding, awesome comp

I'm sooo glad big mountain is back, instead of slope style. Back to the roots

rory-hackett (Oct 6, 2008 at 2:13)
Yet the top three guys in qualifying are 2 "slopestyle" riders and a racer. Hopefully this contest will at least shut up the "slopestyle riders aren't real mountain bikers" people. So stoked to see Gee and Dan representing for the UK, and its great to see bearclaw back on form after his injury. Can't wait for finals.

brycemtb (Oct 6, 2008 at 12:25)
im so glad how this is turning out its not slopestyle at all this is real mountain biking, i like the highlighted quote near the end of the article

nightmareterror (Oct 6, 2008 at 5:27)
Hmmm I hope they are recording this for viewers like us! I really want to see this play by play!!

MTBriderr (Oct 6, 2008 at 7:57)
good to see berrecloth up there! doing some big mountain as he said his favourite style.

nettb (Oct 6, 2008 at 9:14)
See Trek, this is what happens you start designing mountain bikes that are meant for more than for XC kids.

philipstonier (Oct 6, 2008 at 10:01)
i would have loved to see that go down, but some pictures of the guys riding would be sweet

Zbrodniciel (Oct 6, 2008 at 3:23)
Matt Hunter hit the step up hip, and on landing his shoulder popped out. Hunter always seems to have the worst contest luck, hopefully his luck with change soon because he's an awesome rider, with one of the best attitudes in the sport.