For the second time in as many years, High Fives athletes from all over the North East converged on Killington MTB Park for an epic day of shred therapy! High Fives is a non-profit organization that supports and empowers injured mountain sports athletes as they pursue an adaptive path back to the sports they love. 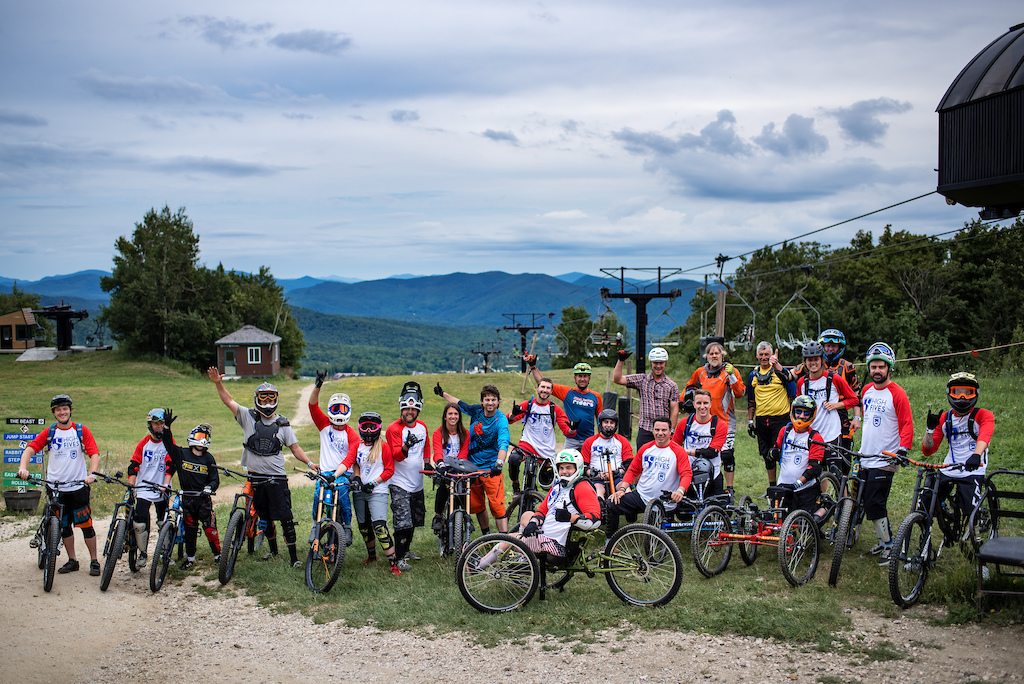 Mother nature came through with the bluebird skies and High Fives with the all-star crew. 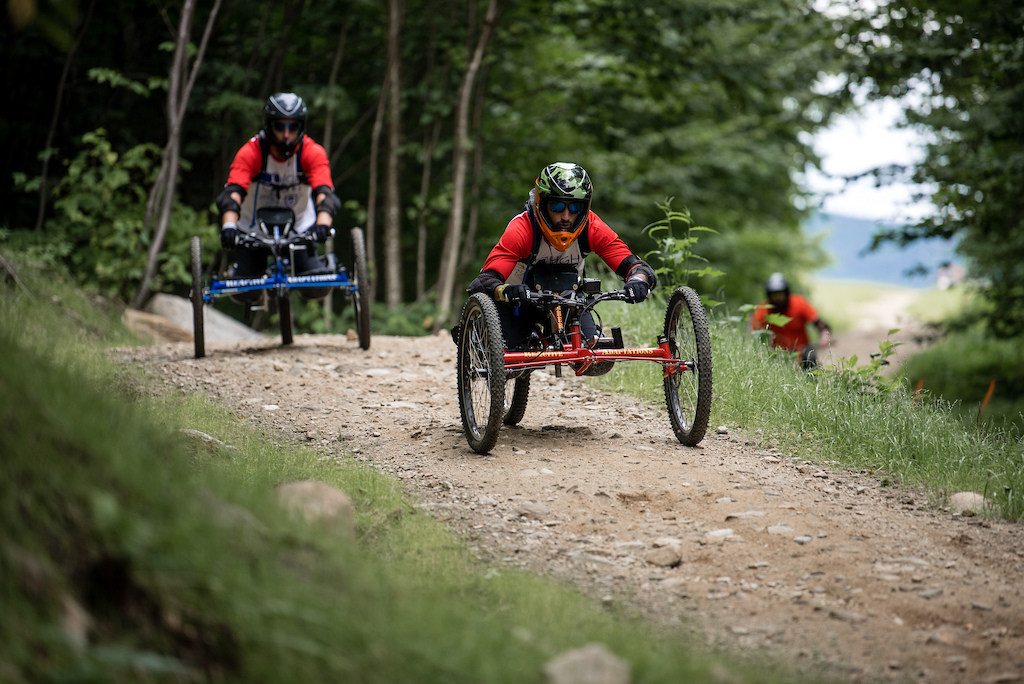 Greg Durso and and Nick Fairall were the first riders to descend down the Snowshed side of the mountain. The terrain was perfect for the Reactive Adaptations Bombers, supplied by Vermont Adaptive, and afforded them lap after lap of enjoyable groomers. 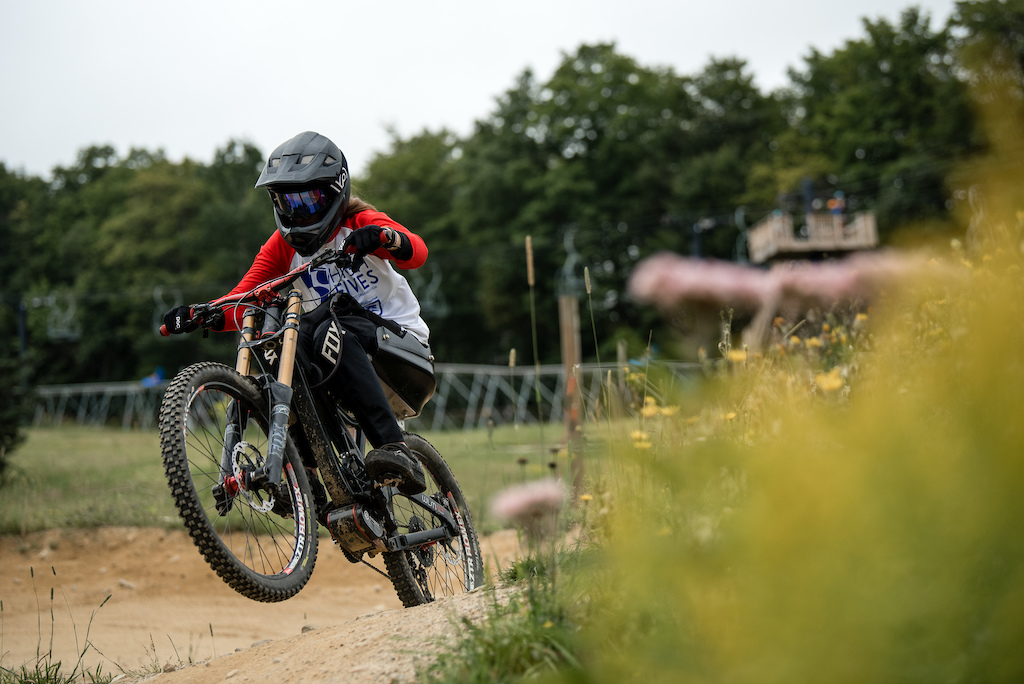 The last time Lindsay Runkel rode at Killington was last years High Fives adaptive MTB day. She's known for shredding the knobs off her Sport-On Explorer 3...but this year Lindsey showed up to Killington with an Adaptive Mountain Bucket Bike that she built up with the help of friends and the MTB community. Thanks to a 1500W electric motor from Paradox Kinetics and a custom-mounted Aspen Seating bucket seat, she is back to riding her Devinci Wilson. "This is my fourth ride on the bike since building it," says Lindsay. "I'm feeling more and more confident every time I ride and having a blast! Next stop for me is Whistler BC for Crankworx!" 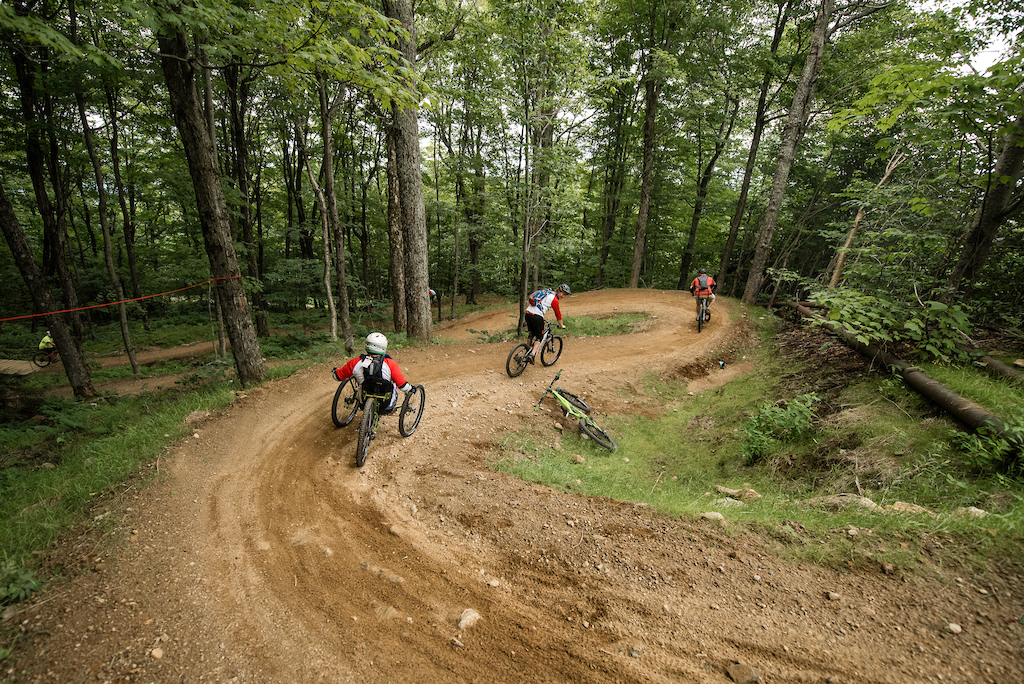 Turned out, it didn't matter what kind of wheels you were rolling on, as long as they were rubber side down. 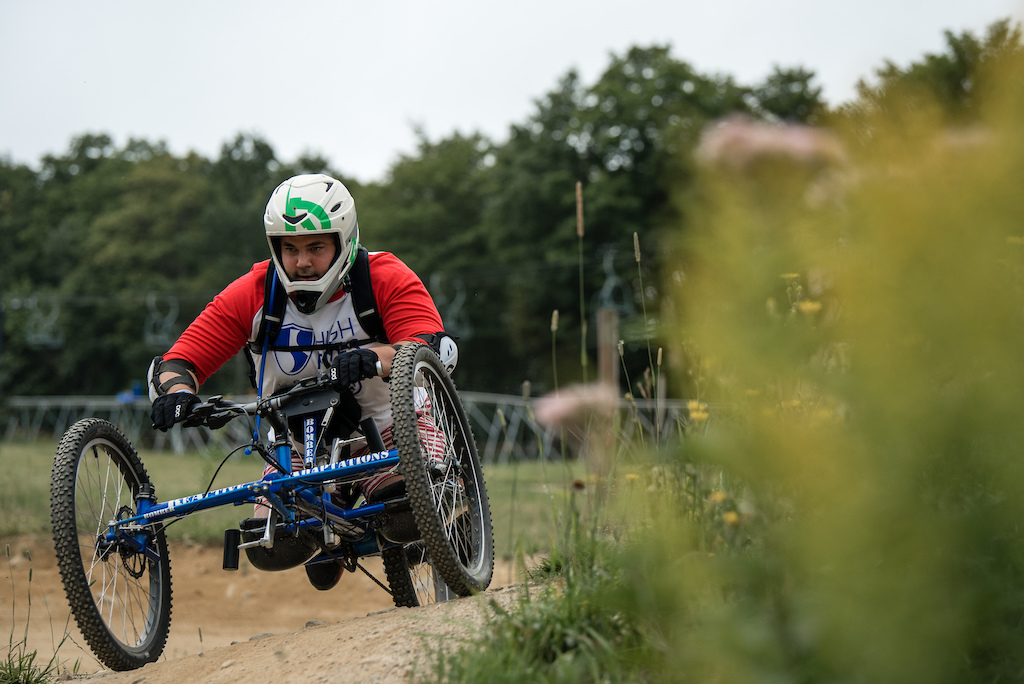 Brooks Curran gets all the photo cred! He spent the day hiding in the woods to document the riders making their descents. In this case it was a first descent! Here we have Ryan McLaren experiencing his first day adaptive Mountain Biking. Looking good Ryan! Keep at it. 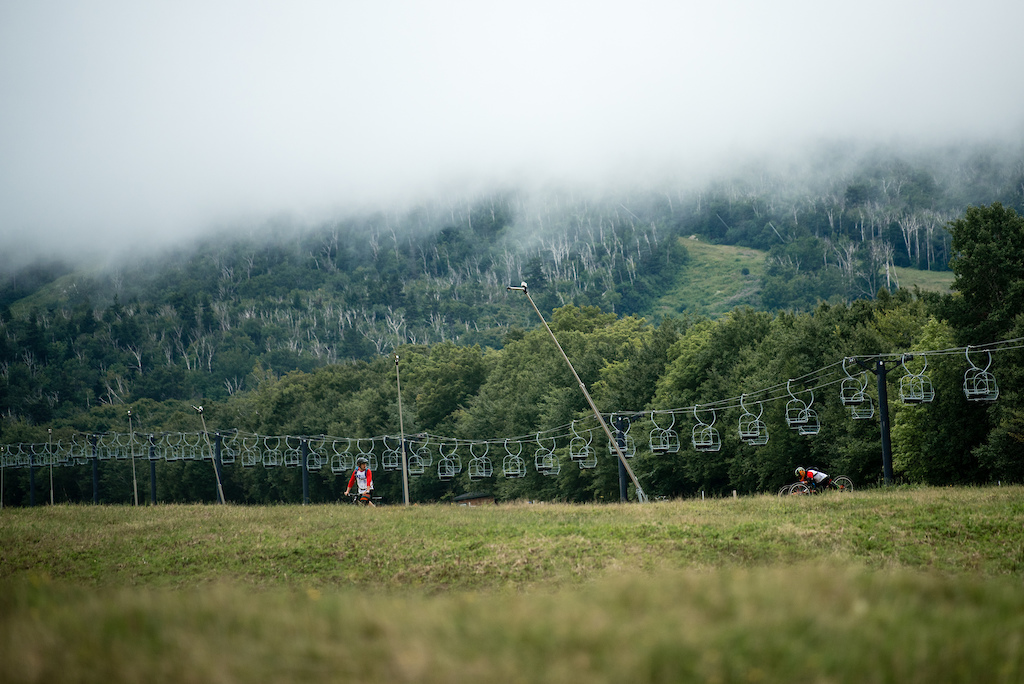 We were racing some afternoon clouds rolling down the hill, but we beat 'em. 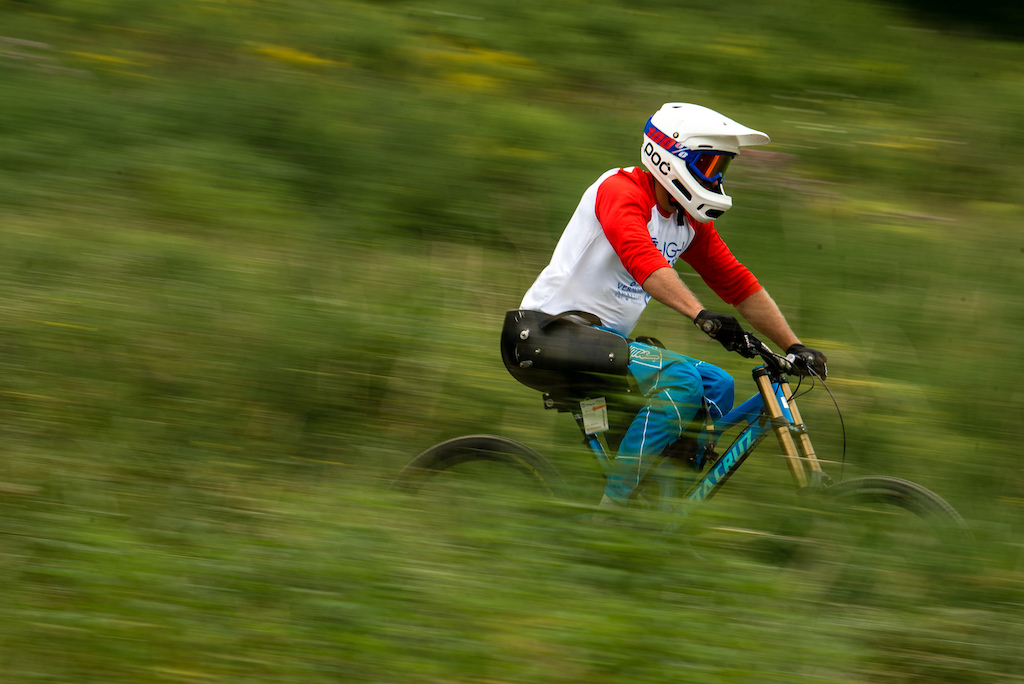 This weekend was Ryan St. Lawrence's second in a row riding Killington. He competed in the FOX US Open the weekend prior, which included an adaptive DH race. Two High Fives Athletes on the podium! 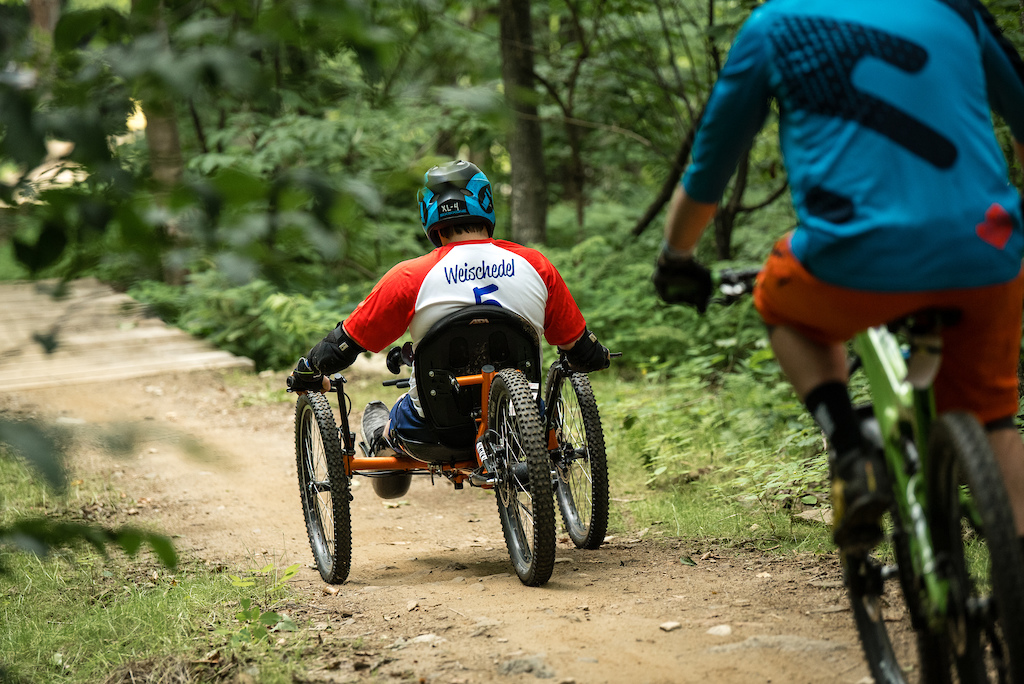 "It was surreal riding behind Keenan for a lap" says program services director and High Fives Athlete #1, Steve Wallace. "To see all of the hard work Keenan put in this winter at the CR Johnson Healing Center payoff was beyond rewarding". To give you some insight as to how serious Keenan is about recovery, he relocated last winter from Vermont to California in order to take advantage of the services available to High Fives Athletes at the CR Johnson Healing Center in Truckee, CA. 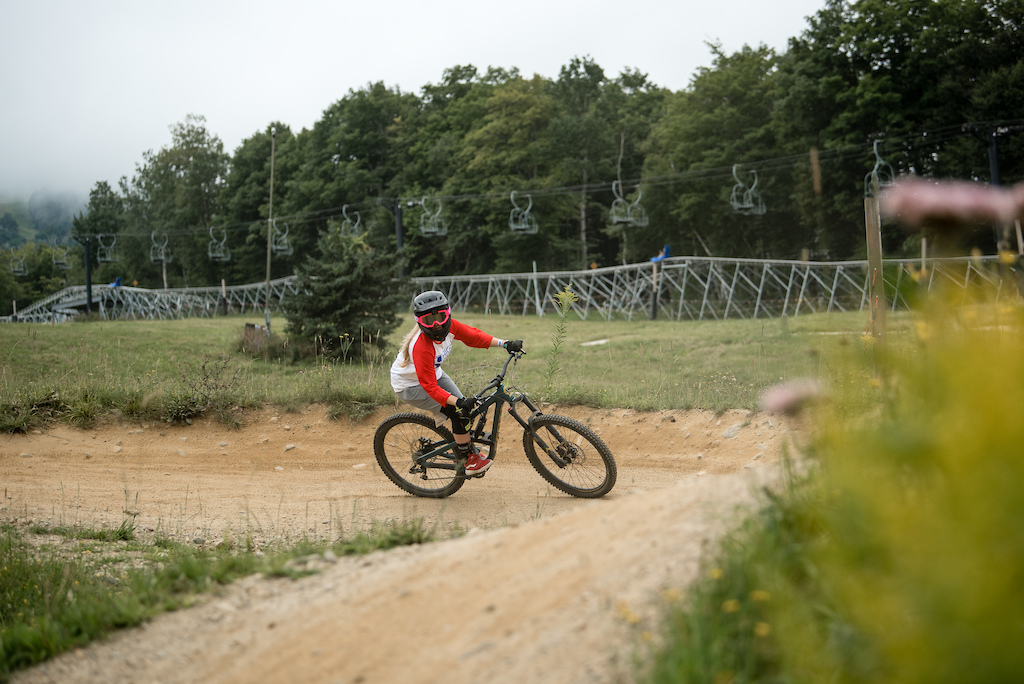 High Fives events coordinator, Juicy Gina, was guilty of smiling all day long. In fact, that was the theme of the weekend: ear-to-ear, top-to-bottom grins. 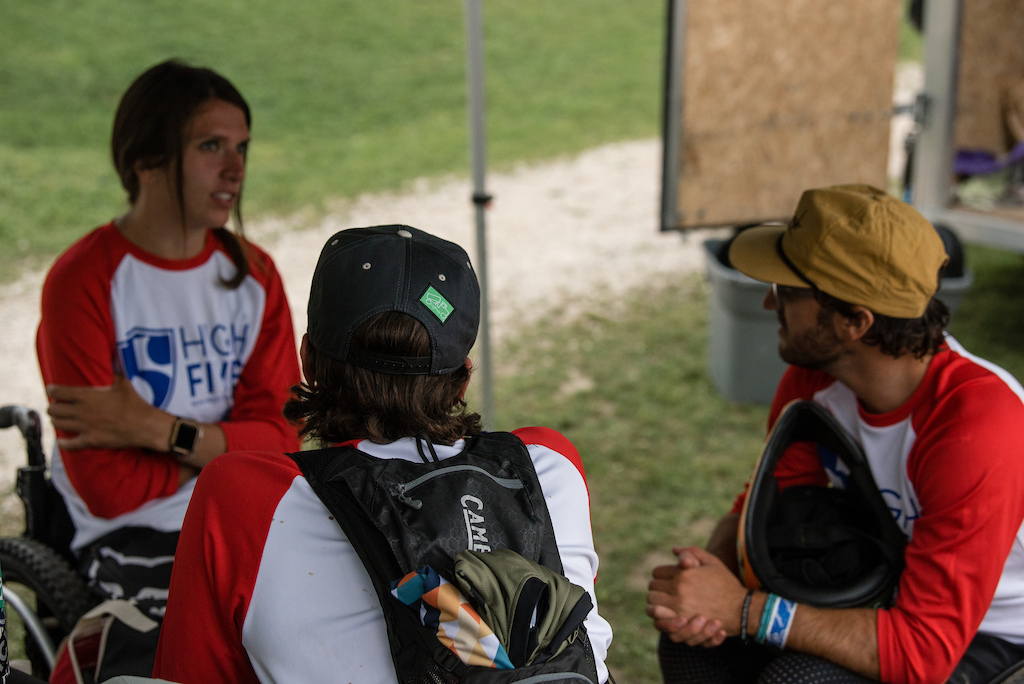 Story time. "You guys should've seen how much air I got".

johnski (Aug 29, 2018 at 4:50)
Some days I'll look up at that super technical climb or stare over that crazy steep down with a pile of reasons in my head that just keep repeating "why you can't." Then, I see an article like this and look at all the photos, and slapped in the face with the reminder that those of us that are fully-abled have absolutely zero excuses. No matter who you, what your situation might be, grip it, rip it, and ride on!

Uzziduzzit (Aug 30, 2018 at 22:01)
I was lucky enough to meet AND hang out with Lindsay at the 2015 UCI World Cup in Windham, NY. Let me tell you she is the coolest chick that I ever met. Despite her injury she had higher spirits than most able body athletes I've been around. Back then she was a new injury so she was confined mostly to a chair(I don't think she had even started to use quad cycles yet)but I remember her commitment to herself that one day she would ride her bike again. I'm sooo happy to see that she reached her goal. You rock Lindz!!

utahben (Aug 29, 2018 at 10:08)
This is the perfect application for E-bike technology. Throw some go juice on these hand crank bikes and let them ride everywhere MTB's are allowed.

timmyelle (Aug 29, 2018 at 7:09)
These guys are the REAL hero's of this amazing sport we share! Life altering injuries cannot keep them away. They embody the true essence of human; perseverance no matter what.

I understand acceptance is part of the injury recovery process, and each and every one of them has accepted their injury, otherwise they wouldn't be out riding. I can't imagine, though, that not a single one of these guys wouldn't trade the world to be able to ride pre-injury for a day. I certainly don't mean to speak for those who have unfortunately suffered these types of injuries, but I can imagine the thought has crossed each and every one of their minds at least once.

These are the people I ride for. I will ride for them until I am in an adaptive bike myself or until I am pushing up daisies.

The fact that come rain or shine, on sand, snow. or mud, if I want to get somewhere I don't need petrol, electricity, nor wind power (though after a curry it might help) all I need is for me to summon the power of forward momentum, using whichever working body parts I have at my disposal, on the BEST machine humans ever made, in all its weird and wonderful forms, the bicycle. ...it amazed me way back when I was knee high, still does now.

fahrwerk (Aug 29, 2018 at 5:37)
The high fives at the end hits ya right in the feels, and made my eyes leak a bit. That is what this is all about- that moment, when you accomplish something that did not seem possible. Great work High Fives!

captainderp (Aug 29, 2018 at 9:09)
i just shared this with a buddy of mine who tried adaptive biking for the first time earlier this summer in COlorad and is hooked. he's been looking for places to ride back here on the east coast.

nikifor88 (Aug 29, 2018 at 5:06)
why every company that rents adaptive mtbs always give these poor people helmets without visors? thats real introllerance here and im gonna fight it

kmayotte (Aug 29, 2018 at 5:34)
Looks like it may be necessary for visibility in the low position on the tri and quad bikes.

nikifor88 (Aug 29, 2018 at 6:03)
@kmayotte: nah, the position is quite similar and on sitting bikes even higher. there is no logical explaination for this degrading nonsense

nikifor88 (Aug 29, 2018 at 7:48)
@Thustlewhumber: its been always like that for some reason and rogatkin just stole this look from disabled people

nikifor88 (Aug 29, 2018 at 23:58)
funny i got downvoted even though may be the only one here knowing what im talking about, hence bein paralyzed and riding amtb XD pinkbike ah pinkbike XD