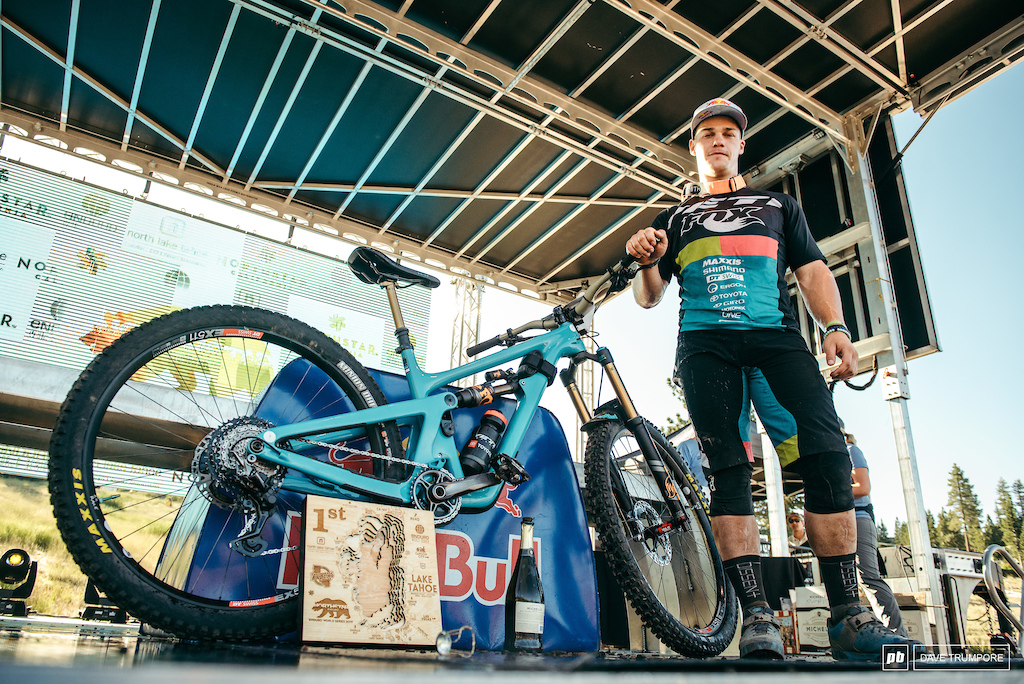 It looks like Richie Rude is back on the Yeti / Fox Factory team for another three years alongside fellow countryman Shawn Neer.

The Yeti / FOX Factory team was announced today and will include two-time Enduro World Series (EWS) champion Richie Rude, who has raced with Yeti / FOX since he was fifteen and signed for an additional three years, and local Colorado racer Shawn Neer. Neer finished strong in 2019, including being a key member of the three-man USA team that won the Trophy of Nations title and finishing 15th overall in the EWS Series.

As one of the most decorated riders on the EWS circuit, Rude claimed a spot on the podium for every race he competed in during the 2019 season. “I’ve been racing for Yeti / FOX since I was a kid. The team is dialed, I’m stoked on the bikes and look forward to another great year,” Rude said during a recent trip to the Yeti factory in Golden, Colorado. Teammate Shawn Neer plans to carry this momentum into the upcoming season and recently headed to California to train with Rude for two-weeks.

The Yeti / FOX Factory race program is unique in that it has three tiers – the World team, a National and a Development (Devo) team. This structure has been in place for over a decade and has been integral in developing some of the best riders in the sport.

The Yeti / FOX National Team will be led by Carson Eiswald and Jubal Davis. Eiswald, from Bellingham, WA, made the jump to the National team early in 2019 after multiple podium appearances and though he was sidelined at the end of the season with an injury, looks to be a force on the circuit this year. Veteran racer Jubal Davis returns for 2020. Davis is a consistent podium contender on the national circuit and his international experience will help fast track younger Yeti riders in their development. Davis also battled injuries in 2019 and is looking forward to getting back on the bike for 2020.

The Yeti / FOX Devo Team has an exciting and promising core of young racers. Quinn Reece and Lauren Bingham will lead the Yeti Devo team. Reece secured his first pro podium in 2019 and Bingham is the current US National Junior Enduro Champion. Both return with plans to step into the national circuit. New additions of Warren Kniss and Dillon Santos puts the team in a strong position to reclaim the Big Mountain Enduro title. The team will also benefit from expanded development and coaching opportunities. Expect to see some of these athletes compete in the North American Continental Enduro Series and other high-profile, international events.

Yeti / FOX Factory Team will kick off the season at the first stop of the EWS circuit in Manizale, Colombia March 28 & 29, 2020.

T-Bot (Jan 16, 2020 at 18:24)
I bet it’s them just having fun to increase the hype. Give it a day or two and whammy, Grubby is back on Yeti. Got to build the excitement some how when everyone was expecting it.

sastyle (Jan 18, 2020 at 3:22)
I'm not really sure what the down votes are for. I've seen him 3 times this past week. Toowoomba - look it up. He's even rocking turquoise Oakley Jawbreakers so make of that what you will...

thenotoriousmic (Jan 16, 2020 at 16:58)
@cuban-b: it’s in their both best interests for both brands to get as much exposure as possible so probably yeah.

freerabbit (Jan 16, 2020 at 18:05)
Richie Rude the only rider not changing sponsors this year! If only this news would have been out a couples of months months ago it would have made things much more simple.

sino428 (Jan 16, 2020 at 19:32)
@freerabbit: seriously. It seemed like any rider who’s contract was up made a move. Not many announcements of riders re-signing with the same team.

Boondocker390 (Jan 16, 2020 at 18:15)
Wait seriously? I thought at this point we all knew it was from Graves' water bottle that had stacker 2 in it or some shit. Either way he did his time and has been peeing clean since, and I imagine he will continue to do so.

pasteque51 (Jan 16, 2020 at 23:14)
@Boondocker390: Because he almost won everything after his suspension? Would be good to have a final statement about it, I'm not sure enduro has a good image when the winners of every round but one were suspended for doping issues for a part of the season

chakaping (Jan 17, 2020 at 0:27)
Resolved is not the word I would have chosen. Dissolved probably a better fit. All a bit murky still. A situation us road cycling fans are familiar with from recent years, no outright smoking guns but lingering suspicions and uncertainty.

phclaw (Jan 18, 2020 at 14:09)
@chakaping: @chakaping: honest question, why lingering suspicion? He won almost every race he did after he served time for otc stuff found in protein powder; which means he's been giving a ton of clean samples since then. Or are you thinking there's some conspiracy to keep his continued doping under wraps? If you are that's some serious tinfoil there...I'd say it's resolved, as much as Maes is resolved, until a test turns up bad...

pasteque51 (Jan 22, 2020 at 2:15)
@phclaw: You seem not to understant that doping on a small period can give you ability to resist to surhuman training and then have benefits for that even if clean in the following months

GorgeousBeauGaston (Jan 16, 2020 at 16:37)
@jaydawg69: Had a feeling that was going to be the case. Going to be crazy to see what he can do on a Softride, especially with the Spinergy wheels.

Beam suspension saddle and coil damped stems are the future

Wonder when Intense bikes come back from the bargain bin.

DrPete (Jan 18, 2020 at 14:30)
I will say I’m a Ryno Power user now and would never have heard of them if it weren’t for the doping scandal. I guess there really is no such thing as bad press.

jaame (Jan 16, 2020 at 14:24)
@makripper: yeah there has been intense speculation that he’s signed for a new team that most French Canadians would pay a king’s ransom to ride for.

trailtaco (Jan 16, 2020 at 17:12)
The press release should read... We will continue to focus heavily on our Enduro team to help attract new customers as most of our customers only purchase from us once due to our shitty customer service.