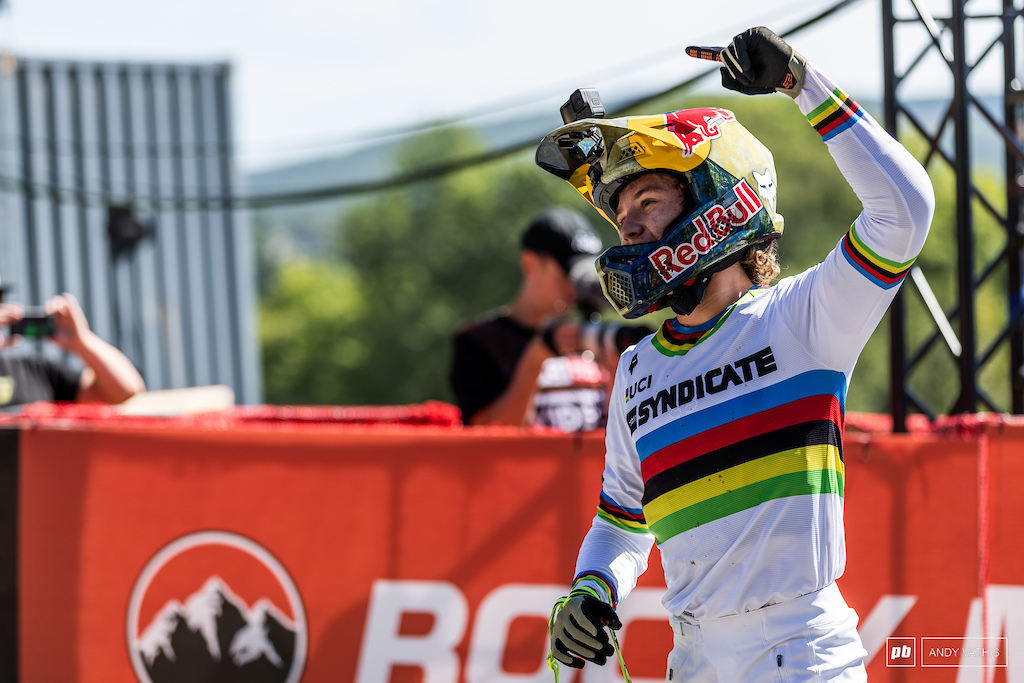 Jackson Goldstone will be looking for his second World Championship win in the Junior DH category after claiming the rainbow stripes in 2021.
Cycling Canada has announced a contingent of 51 athletes who will head to Les Gets, France to race in the UCI Mountain Bike World Championships on August 24-28.

The DH squad has big goals with Jackson Goldstone looking for his second World Championship win in the Junior DH Category after claiming the rainbow stripes in 2021. Coming off his win in Mont-Sainte-Anne, Finn Iles will also be eyeing the top step of the podium in the Elite category. World Cup Overall Leader Gracey Hemstreet is also strong contender for the Junior Women's podium in what has been an incredible season for the Junior athlete from the Sunshine Coast.


On the XC side, fresh off his National Championship win and three medals on the 2022 World Cup Circuit is U23 rider Carter Woods, who will be looking towards the podium after falling just shy at the 2021 World Championships. Elite riders Emily Batty and Peter Disera each claimed a National title at the 2022 Mountain Bike Canadian Championships in XCO and will be looking to perform with the maple leaf on their jerseys in Val di Sole.


Racing will start on Tuesday, August 23rd with the Short Track (XCC) qualifications, followed by the XCO Team Relay, the DH Qualifications and all three finals of the XCC, the XCO and the DH on Friday, Saturday and Sunday.

jeffrocx (Aug 17, 2022 at 17:09)
When I saw the title of this article I got really nervous, like an acceptance letter. I finally worked up the courage to open it and read the names and I'm more upset than I thought I would be to get to the bottom of the list without reading my name. I guess I'll have to plan on entering one or more races at some point. Good luck, everyone who made the cut! Give 'em hell out there.

casey79 (Aug 17, 2022 at 23:43)
All of the team selected are ranked above Seth with the exception of Jack who has 2 points less than Seth. Jack got 4th at the Canadian Nationals while Seth didn't race the Nationals.

kiddlivid (Aug 17, 2022 at 23:44)
Seth seem to be in a weird spot, I was stoked to see him climbing the DH ranksz and the what seemed with a sudden switch to EWS without much announcement or reasoning to the public which is fine, and I'm stoked he's crushing it there. It's awesome if he's the next Jesse for Canada, but given he was one of the more successful Intense riders earlier in the season, the sudden switch from DH and the lack of Seth coverage from the intense team seems suspect.

TheBearDen (Aug 18, 2022 at 9:08)
@kiddlivid: Ride a sick carbon enduro bike and push for the overall title in EWS ooooor ride a 40+ pound lead sled in hopes to be midpack in DH... Im thinking Seth is making the smart decision to focus on EWS for a bit. I don't see him riding the soviet era DH bike very often but rides that Tracer lots.

scstrail (Aug 19, 2022 at 7:54)
@kiddlivid: The Intense team seems to give him props on the IG feed for his results at EWS. Maybe you are not looking at the IFR feed?

andrewbikeguide (Aug 17, 2022 at 18:07)
Yeah their normal is everyone else's insane!! Side effect of growing up in Whistler and loving biking and skiing (and being good at both).

ReubenSandwich (Aug 17, 2022 at 19:44)
Given the recent results of the Canadian Open race, Cycling Canada has chosen a team of Australian dh racers with a small smattering of native-tongued Canadians.
Jeff Gretzky* Cycling Canada's spokesperson was quoted as saying:
"It was the natural choice, Australian is the 3rd official language spoken in Canada especially in Whistler village, which is actually an annexed foreign region governed by Australia. Australia has a rich history of DH talent so we are capitalising on our terrain that has attracted them".

As for Emily Batty, your teammate will tell you it's All About Control, and if the first turn gets Nasty again quickly tell yourself "Come On Get Up" and to Go Deep.

mledawn (Aug 17, 2022 at 17:59)
Had a chance to see 5 of the 7 Jr XCO Women compete at the Canada Summer Games last week. Definitely looking forward to seeing how they (especially Ava) match up with riders from around the world next week.

juanargent (Aug 18, 2022 at 0:43)
The Dh racers pay 100 % of their costs to attend and race, no support funding from Cycling Canada, yet have the best chances for results.

kclw (Aug 18, 2022 at 5:20)
Actually as of this year cycling Canada has found a significant source of funding for DH. Like XC riders still have a cost but they no longer have to cover everything. And remember XC racers have collected 7 senior world championships over years.

The racers have to cover everything... The juniors a little less so...

kclw (Aug 18, 2022 at 9:06)
@da1994canucks: I don't know enough of the details. But I do know that cycling Canada was sucessful in lobbying Own the Podium to include funding for gravity. There is also a seperate fund that provides additional funds. I have no idea how these funds are being used. I suspect they are covering the cost of the support staff at WCH (mechanics, physio, coaches, ect...)

@skimtb1 both XC and DH athletes have to pay a project fee. The only riders exempt from this are the very top riders, who are ususally there with their pro-team.

scissors888 (Aug 19, 2022 at 6:38)
@kclw: I seriously question this. Own the Podium provides for Olympic Sports only. Any funding provided by OTP needs to go to what the sports federation said it was going to as well.

spudreau (Aug 18, 2022 at 5:44)
**Also incredible Moto enduro specific trails. Over 500km of maintained trails within 45 min drive. Plus 2 national mx tracks! (RJ’s and Motopark). Still looking for time machine to give me 15 years back and healthy shoulders though…

MDW83 (Aug 18, 2022 at 6:22)
@spudreau: ya, I just looked at the trails on trail forks, will need to check them out. Funny enough, I grew up in Muskoka right close to there, but didn't get into MTBing until I moved to Ottawa. Cheers.

+ Hundreds of KM of sand based MTB terrain
+ Thousands of KM of quiet paved and gravel roads
+ 90% of all Ontario cups are within 60 to 90 minutes drive.
+ Solid XC skiing for winter training

sportstuff (Aug 20, 2022 at 9:24)
Tough to build descending skills when you’re highest hill is a garbage dump converted to a skil hill. Lol

Perhaps you were taught math in BC?

adamkat (Aug 18, 2022 at 6:43)
Its MSA ... not sure why they list it as that instead of MSA or Beaupre. Same with "Horseshoe Valley", which is not technically a municipality or township or anything, just a location which is in parts of Oro-Medonte & Springwater townships. No town or even village named Horseshoe Valley.

gramboh (Aug 17, 2022 at 23:13)
isn't Gabe Neron from QC originally? But has been in BC for a few years now I think, since I've been following him anyway. Would be cool for the QC scene to be strong though, the more competition and DH races in Canada the better!

TheBearDen (Aug 18, 2022 at 7:43)
Understandable. Not really her thing right now with her new team and race program.